Fiery mountains and mud springs: what to see in Azerbaijan

Hot and windswept Azerbaijan may surprise even an experienced traveler. Here, the sparkling skyscrapers of Baku organically coexist with the old houses of Sheki, the burning cliffs of Yanar Dag with the cool waves of the Caspian, bother the Persian culture and Soviet power left their traces here. If you want exotic, but you don't feel like going for it to the other end of the world, then Azerbaijan is perfect option for you, so Travellizy recommends you.

At a glance, the capital of Azerbaijan gives an understanding of how the country lives now. From the narrow streets of the historical district of Icherisheher, where it seems that you have been traveled back for several centuries, you can clearly see Flame Towers, the symbol of the future. Baku is able to please both fans of antiquities and those who prefer the achievements of modern civilization. 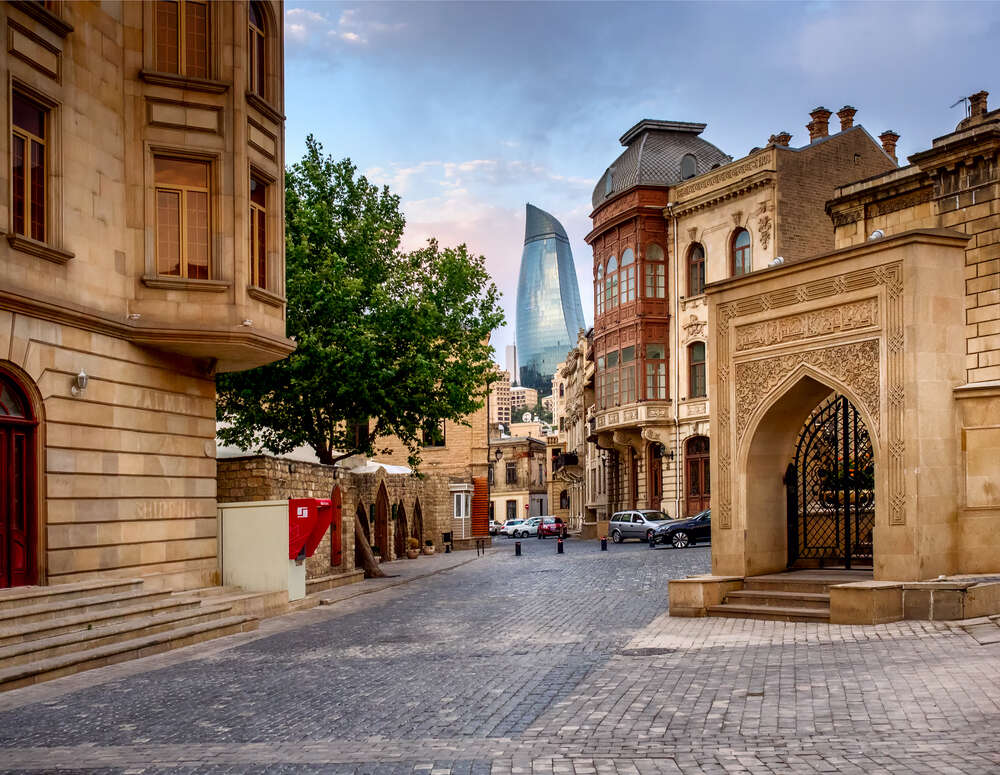 Climb the Maiden Tower (Gyz Galasy) and look at the Palace of The Shirvanshahs, and after that make your way to Fountain Square to refresh yourself, where a cafe for every taste and budget can be found. In the afternoon, hide from the heat in the Carpet Museum or the Heydar Aliyev Cultural Center, and get acquainted with the modern art of Azerbaijan at the same time. And in the evening, when the heat decreases, take a walk along Primorsky Boulevard. 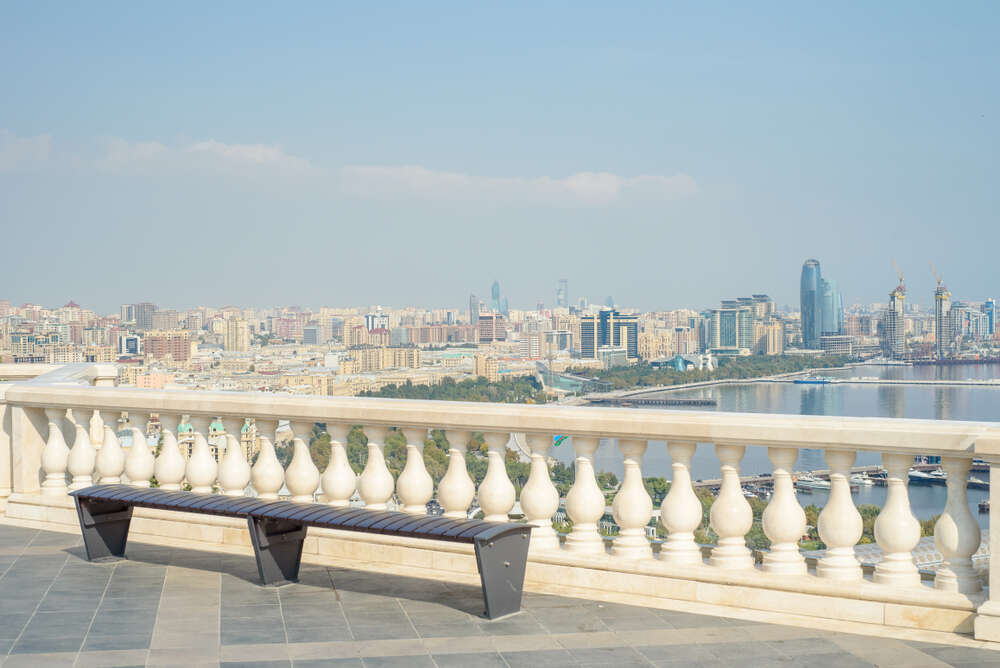 Almost all the sights of Baku can be seen in one day. But, if you are going to stay in the city longer, then you should definitely go to the beaches of the Caspian Sea. You can get to them in an hour and a half by bus or a rented car, and the refreshing water will be especially pleasant after the hot city streets.

Traces of ancient civilizations in Gobustan

In the Gobustan State Reserve, it seems that because of the nearest rock, a hairy mammoth hunter, who has just finished painting stones with scenes from primitive life, is about to jump out at you. There are over 6,000 ancient petroglyphs in the reserve, and their age is thousands of years old. 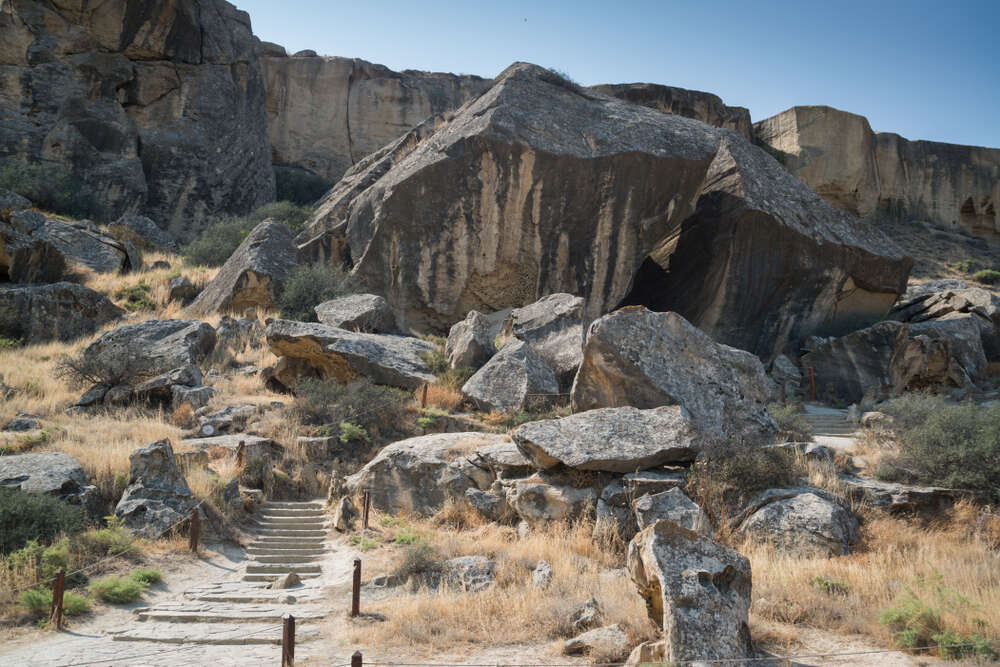 There are fewer mud volcanoes in Gobustan, only 350. But this amount is enough to make an unforgettable show. Gurgling mud and underground gases periodically flashing with bright fire are ready-made sets for filming a movie about another planet. The traces of human settlements in numerous caves remind us that this is still our native land. 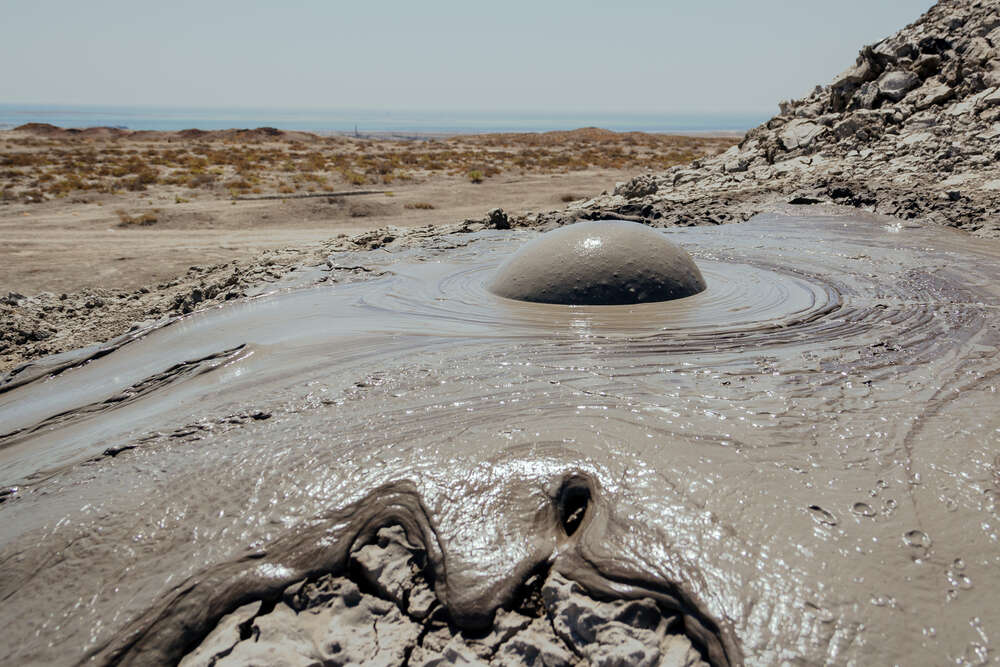 Halfway between Baku and Gobustan is the original Bibi-Heybat Mosque, built in the neo-Ottoman style. 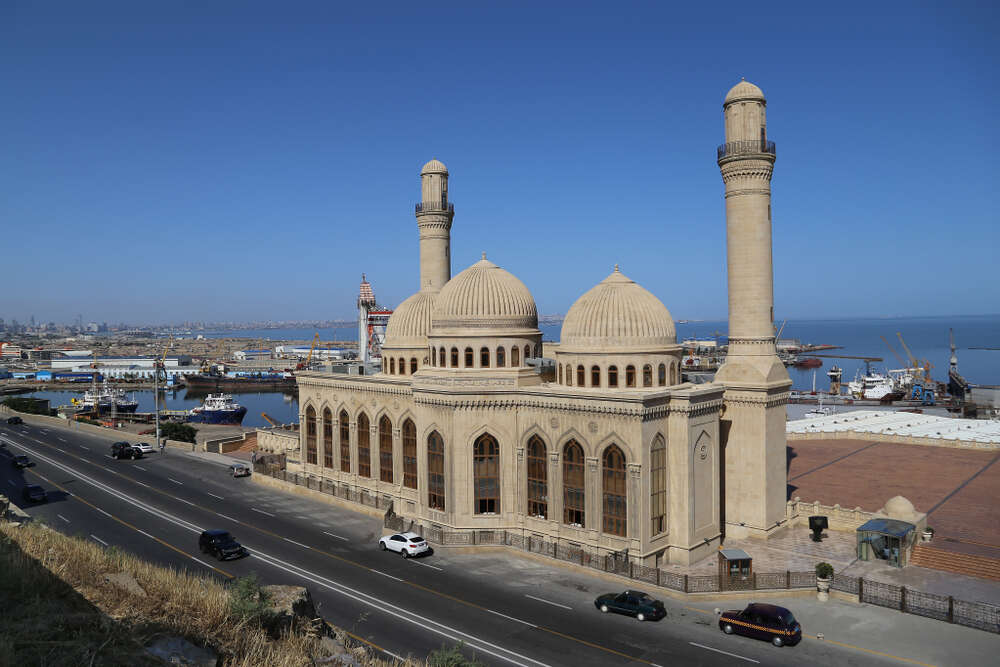 30 kilometers from Baku, there is an ancient temple of fire worshipers. Once, the Zoroastrians performed their services here, then the Muslims drove them out of the territory of Azerbaijan, but the temple remained standing, not subject to the passage of time. It is interesting that already in the XIX century the church was visited by Alexandre Dumas, the father, which was mentioned in his works later. 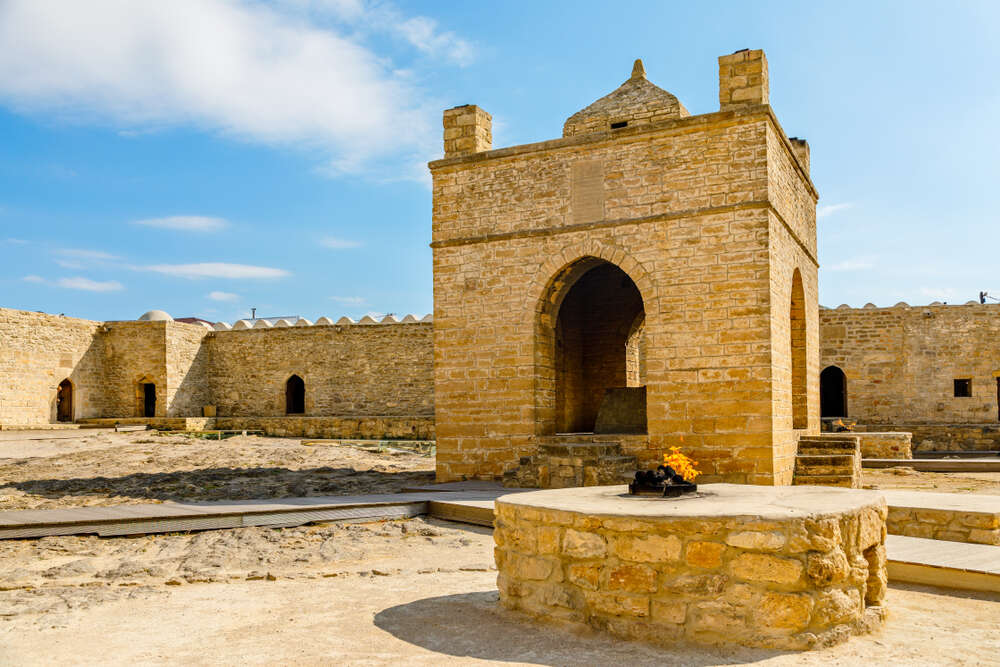 The fire in the Ateshgah Temple is the result of burning natural gas, no mysticism, but it still makes a fascinating impression. In the cells, you can see scenes depicting the life of the servants of the fire.

If the fire in Ateshgahwasn't enough for you, then go to the foot of Mount Yanardag. Here, not a lonely torch burns, but as many as five meters of land. The flames of natural gas made this area black and sooty, and the occasionally rising wind gives the flames the appearance of dancing dragons. 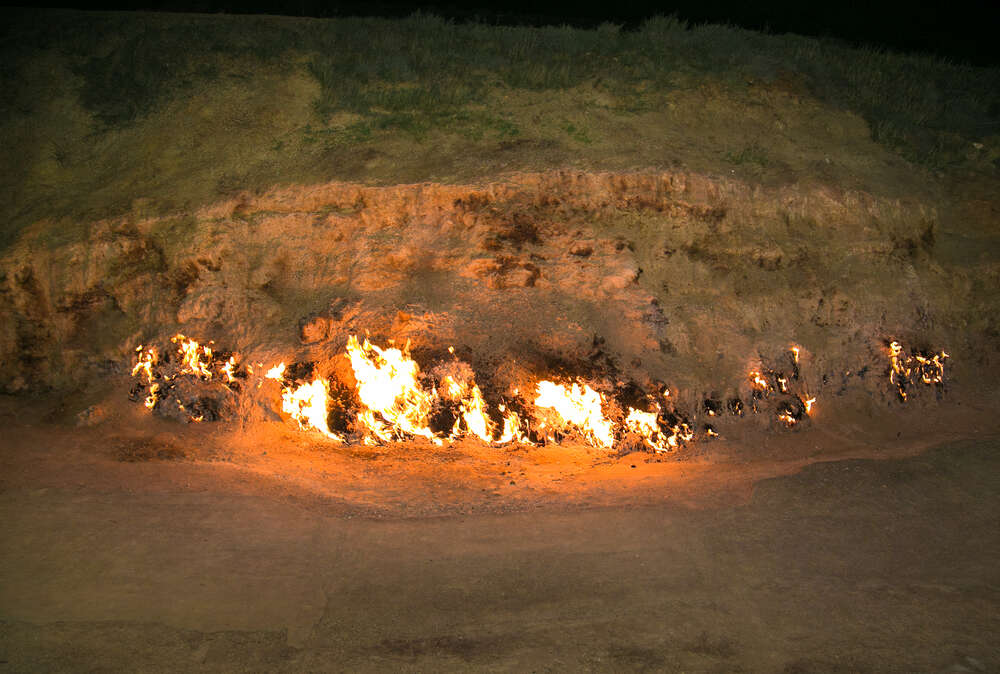 Yanar Dag looks especially impressive after sunset or before dawn, then the illusion of an eternal fire is most complete.

Oil in Azerbaijan is not only one of the country's main sources of income, but also a therapeutic agent. You can verify this yourself in the sanatorium city of Naftalan, the only place in the world where medicinal naphthalene oil is extracted.

In Naftalan, with the help of oil baths, ill people literally get back on their feet; at the sanatorium, there is even a museum of crutches left by those who received miraculous treatment here. In between health treatments, you can take a walk in one of the city’s many parks.

The village of Lahic stands on the Great Silk Road, and the unique atmosphere of a medieval trading city is still preserved in it. Almost every house in Lahic is also a craftsman’s shop where you can buy jewelry, dishes, cold steel or a carpet. 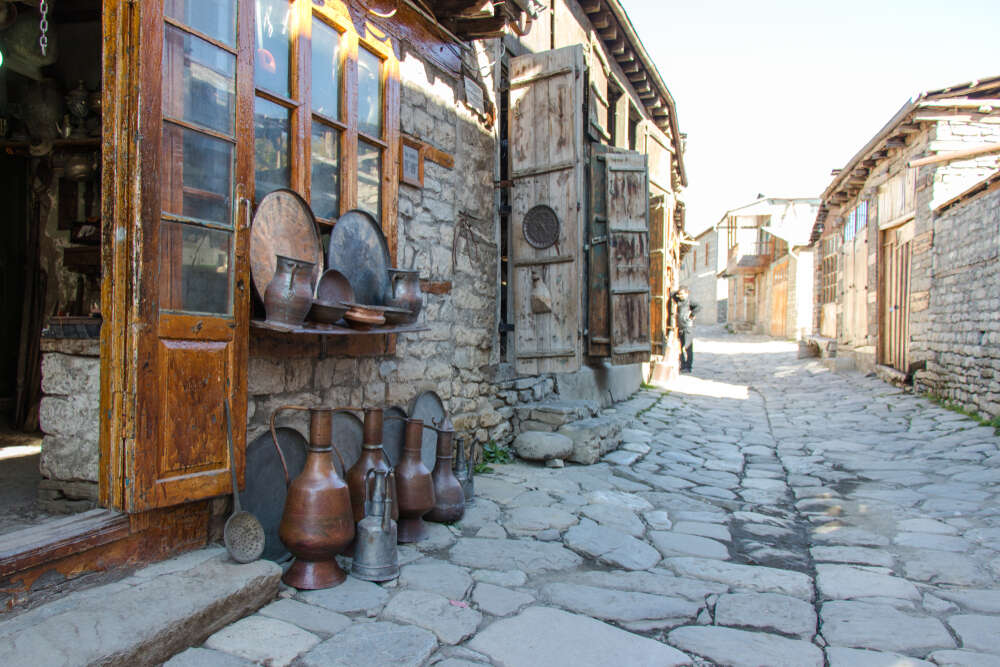 It is noteworthy that the village is divided into areas precisely by crafts. Walking along the stone-paved streets, you can come to the market for copper utensils, where dishes and plates are struck by fine engraving. In another area, sharp knives in painted sheath sparkle in the sun, in the next area, a potter creates a vase or a pot right in front of you. If you need the most authentic Azerbaijani souvenirs, not shop production, then you definitely need to Lahic. 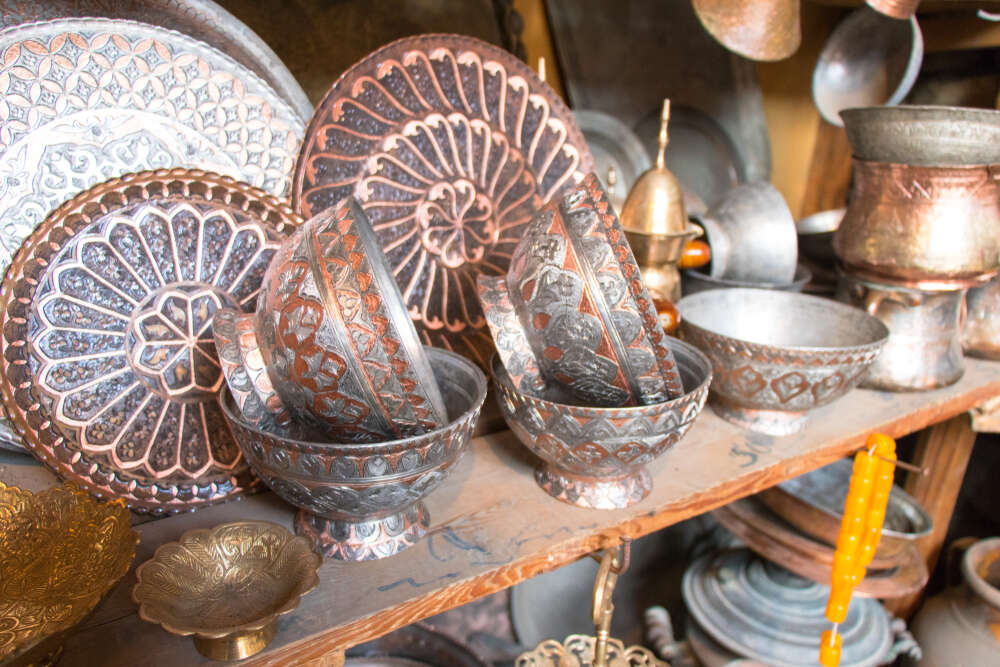 Only a few years ago, only the most stubborn tourists reached the mountain village of Khinalig on SUVs. Now, a well-covered road has been brought up to it, and the village has turned into one of the main attractions of Azerbaijan. 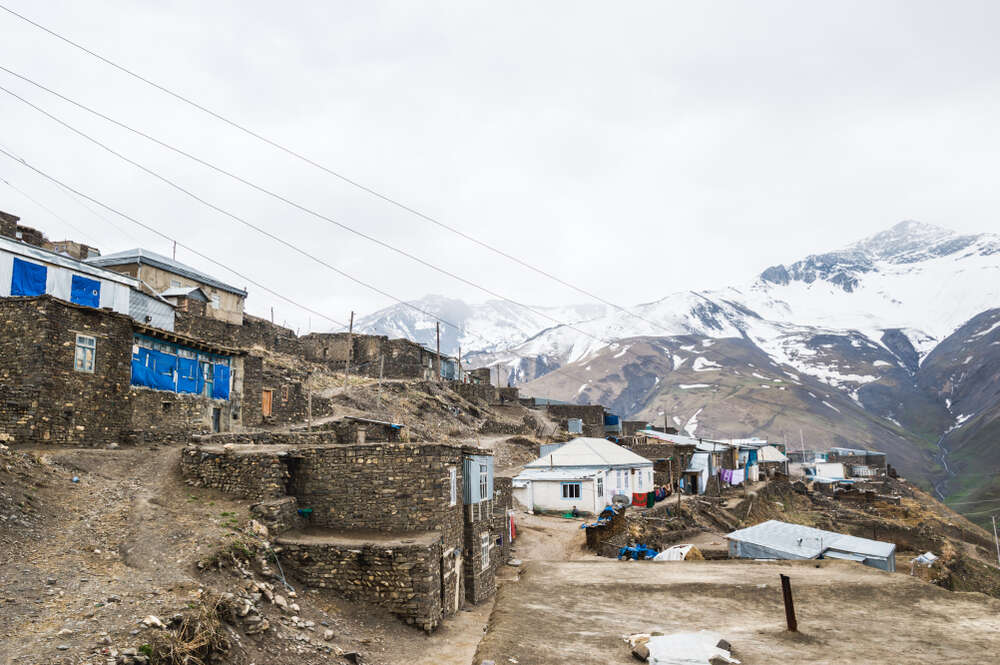 The houses in Khinalig are built with terraces - the roof of one house is simultaneously the yard or floor of the other. And the upper part of the village offers a stunning view of the surrounding mountains with snow-white peaks. 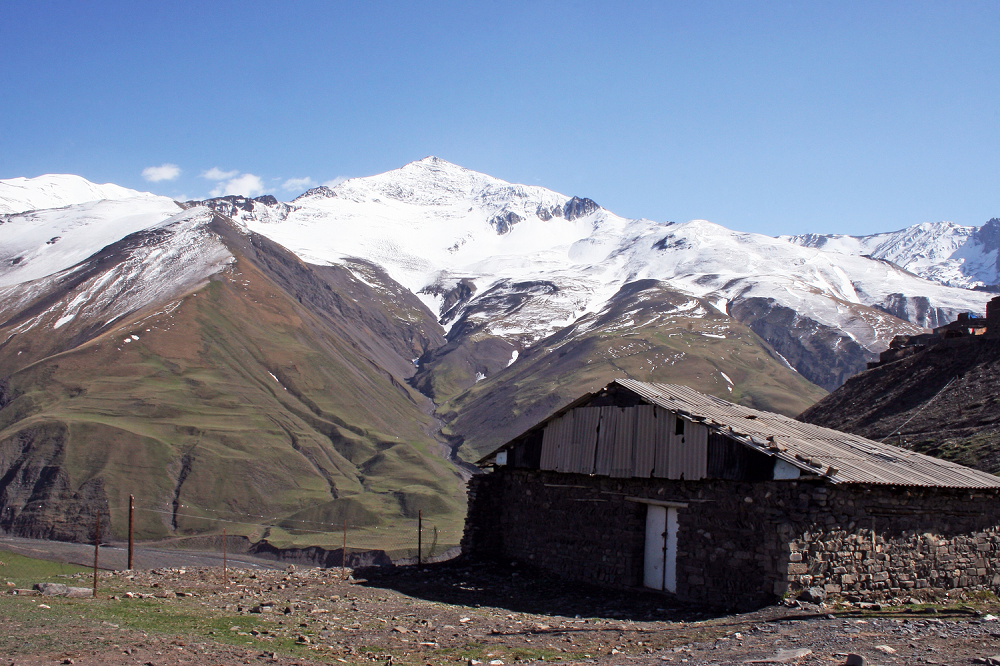 Laza, another Azerbaijani village, awaits those who want more than just stunning views, but also hiking in the mountains. It is surrounded on all sides by steep cliffs from which thin cascading waterfalls fall with trampled trails between them. Please note that a special permit will be required to go trekking through the territory of the Shahdag National Park. 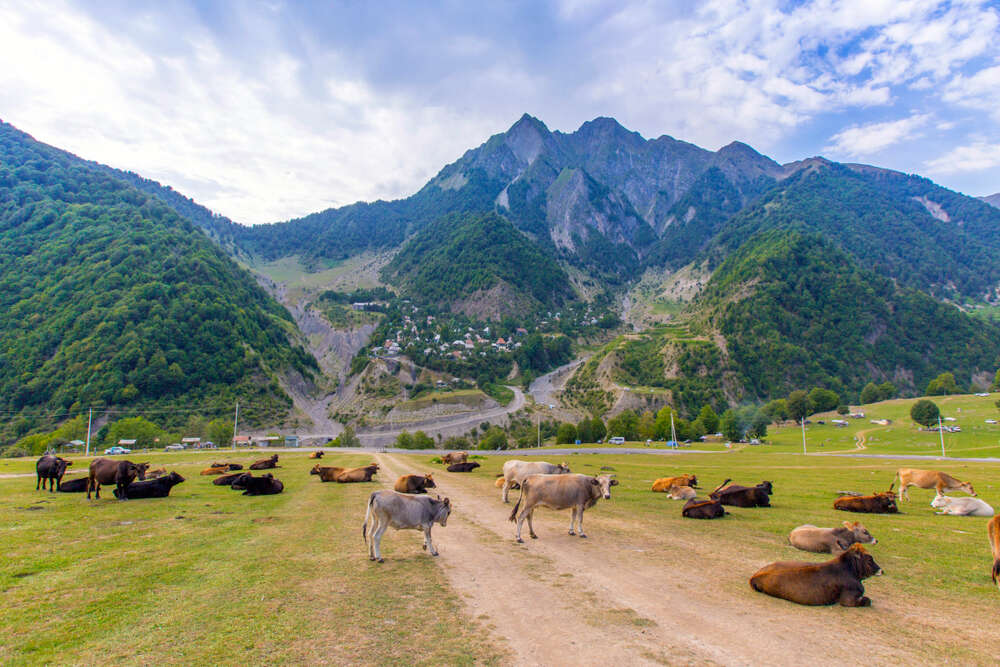 And the last on the top list of three most picturesque villages of Azerbaijan is Ilisu. Now, it’s hard to believe that this tiny settlement used to be the capital of the whole sultanate. From here, tourists go on simple hiking in the mountains, in the village itself, there are very nice stone houses with tiled roofs and arched doors. 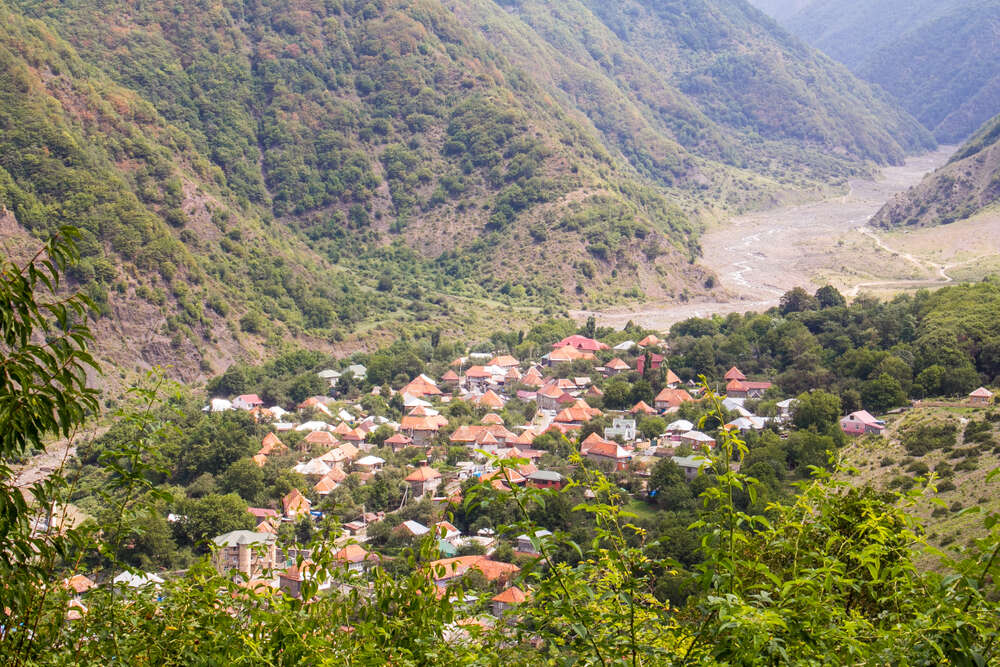 Göygöl National Park, spread on the slopes of Mount Kapaz, is the center of ecotourism in Azerbaijan. People come here for a relaxing holiday, leisurely walks in nature and clean air. 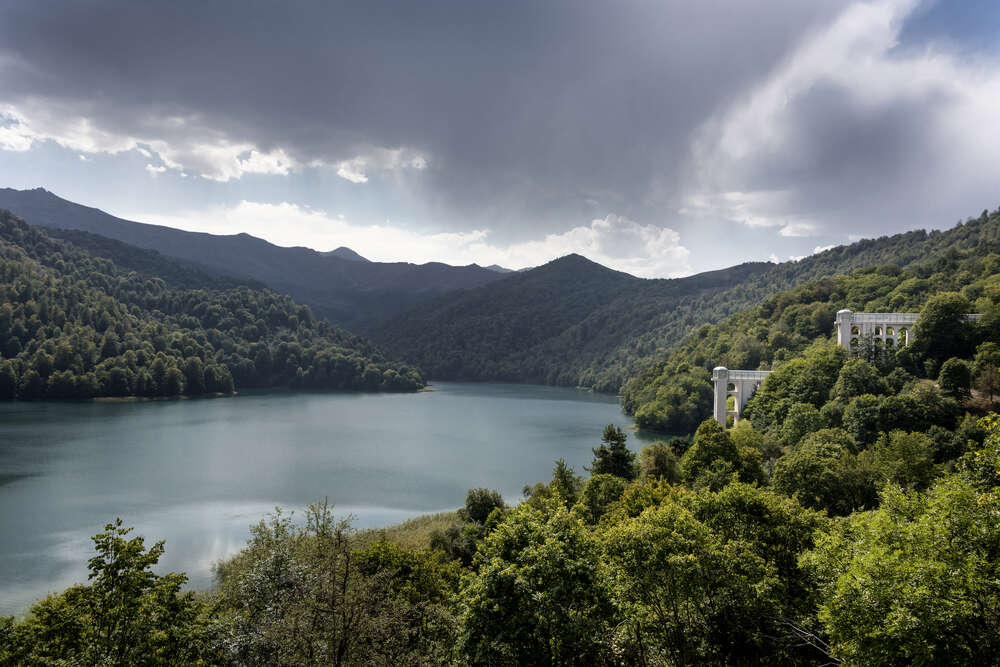 The main attraction of Göygöl is a crystal blue lake, which was formed as a result of a large-scale earthquake almost a thousand years ago. And the main entertainment in the park is the mountain tracks, which even a beginner can master without special equipment and training.

Most of the inns and caravanserais, where traders traveling along the Great Silk Road stayed, have become the most ordinary hotels now. But this didn't happen to the caravanserai in Sheki, because a museum has been organized here, where you can see curious details of the life and leisure of the caravan. 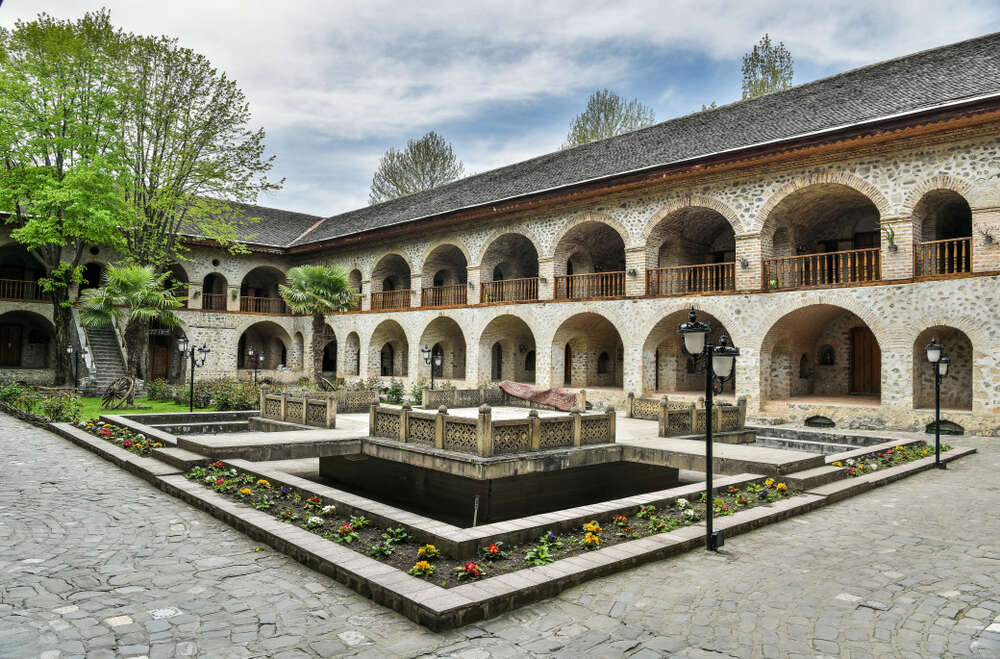 Outside, the Sheki caravanserai looks more like a fortress - with massive stone walls, small windows, impressive wooden gates that are closed by a special mechanism. Inside, this is a dream of fans of oriental flavor. Carpets with authentic ornaments, hammered dishes, chests in which goods were stored. It is easy to feel here like a merchant from Persia, fleeing from the midday sun in the shade of stone walls. And also, you can arrange a very interesting photoshoot. 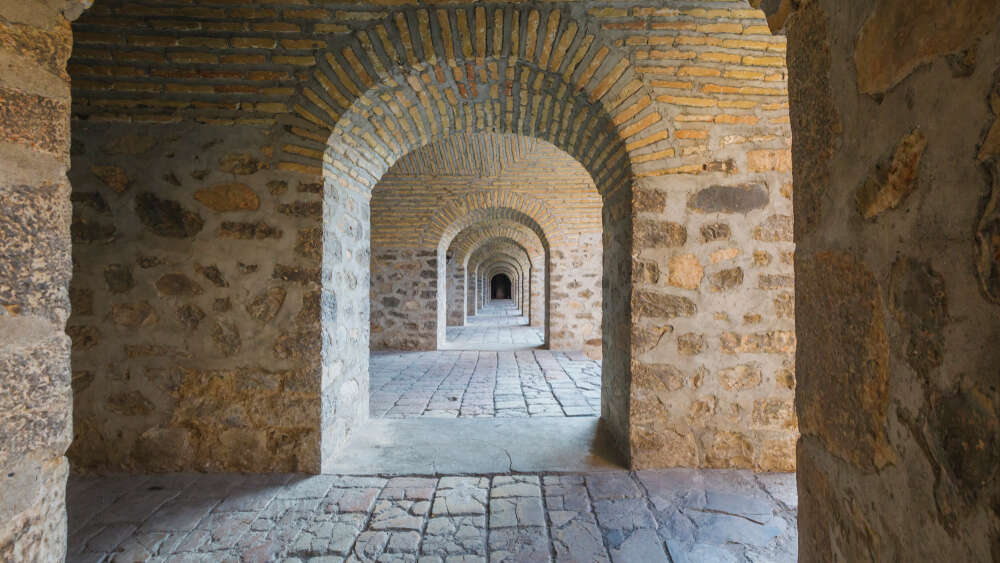 The second remarkable building of Sheki is the Palace of Shaki Khans, built in the Persian style. Its painted walls and multi-colored stained-glass windows will become not only a delight for the eyes, but also the main decoration for your Instagram. You can watch the creation of the famous stained-glass windows in the workshop, which is called shabake here. 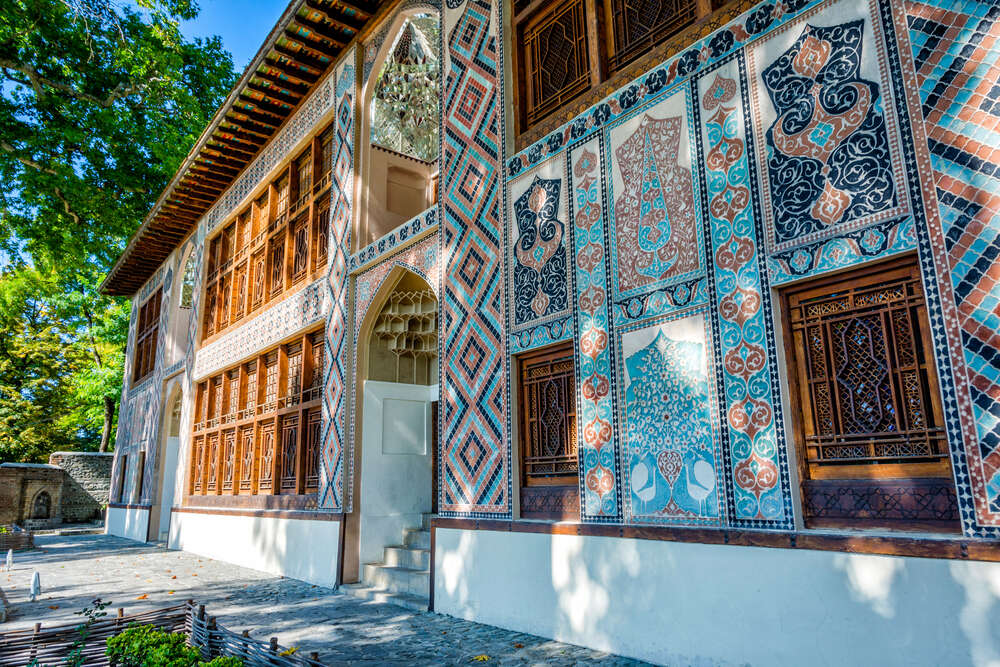 By the way, Sheki is also famous for the most delicious food in all of Azerbaijan. You will never forget homemade Sheki halva, walnut jam, lamb dishes with apples. And, most likely, you will want to take away from here a bag of oriental sweets. 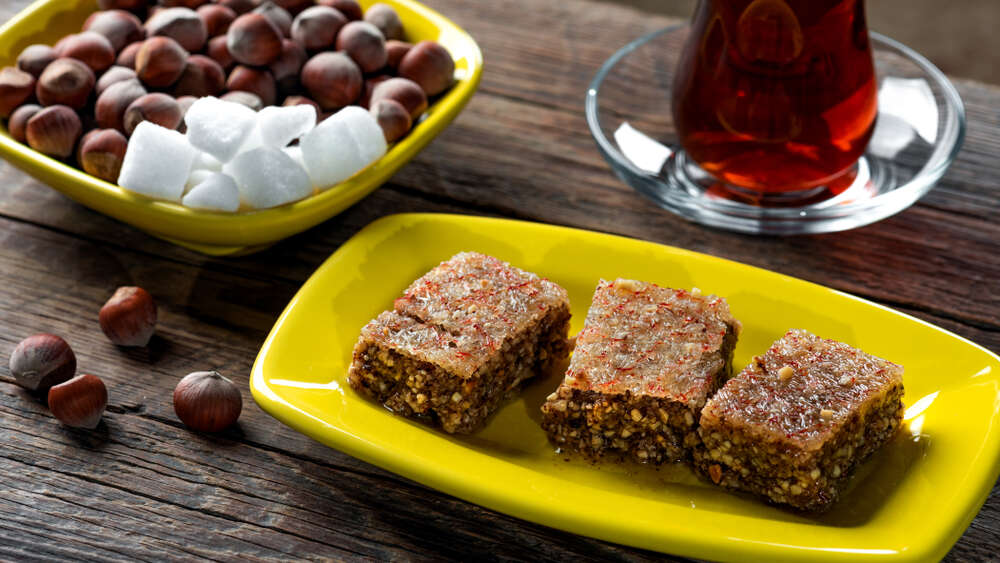 Azerbaijan welcomes each guest with genuine oriental hospitality, and it has a heap of impressions for everyone. It doesn’t matter whether you go up to the top floor of a skyscraper or walk around the old city, bask in the natural fire or cool off in the sea, anyway, you will not remain indifferent to this beautiful country.