The national park in the Wicklow Mountains is a fabulously beautiful place with mountain lakes, mountains, forests just an hour's drive from Dublin. The Wicklow mountain range stretches across three counties. They occupy the whole center of County Wicklow and extend beyond it into the counties of Dublin, Wexford and Carlow. We will tell you what beauties can be seen in these places.

The Irish mountains are not high at all. But from their peaks, stunning views open up. Church Mountain, also called Slieve Gad, which means "covenant mountain" in Irish, is the westernmost of all the Wicklow mountains in Ireland. Its height is 544 meters. At the top, you can find the remains of a large ancient pyramid of pagan origin. The tomb made of stones was partly destroyed and a small building, most likely a church, was built on it in the Middle Ages. That's where the mountain got its name from.

Slieve Gad is the fourth peak on the island to have a church erected directly on or near a megalithic tomb, along with Croagh Patrick in County Mayo, Slieve Donard in County Down and Mount Brandon in County Kerry. All of these places became important for the celebration of the Lunar festival and then, with the adoption of Christianity, as places of pilgrimage. The Holy Well, which is no longer visible, was also located here, it was visited because of its healing power and as a place for performing the sacrament of baptism.

The top of Church Mountain offers panoramic views: the plains stretching to the south and west, Blessington Lakes in full view lying in the north, as well as the peaks of Lugnaquilla and Great Sugar Loaf visible in the east. 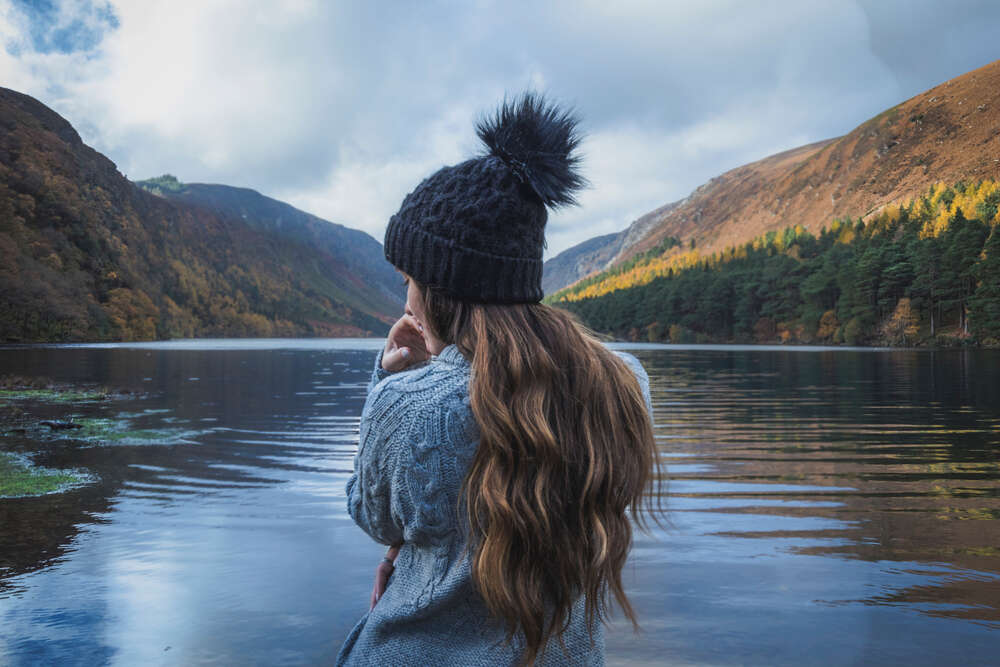 Walk around the lake Lough Ouler

The 7.4 km loop is a popular route. Lough Ouler is Ireland's only heart-shaped lake located in Wicklow Mountains National Park. While climbing the loop around the lake from the slope of Mount Tonelagee, stunning views not only of the lake, but also of the Wicklow Mountains open up. 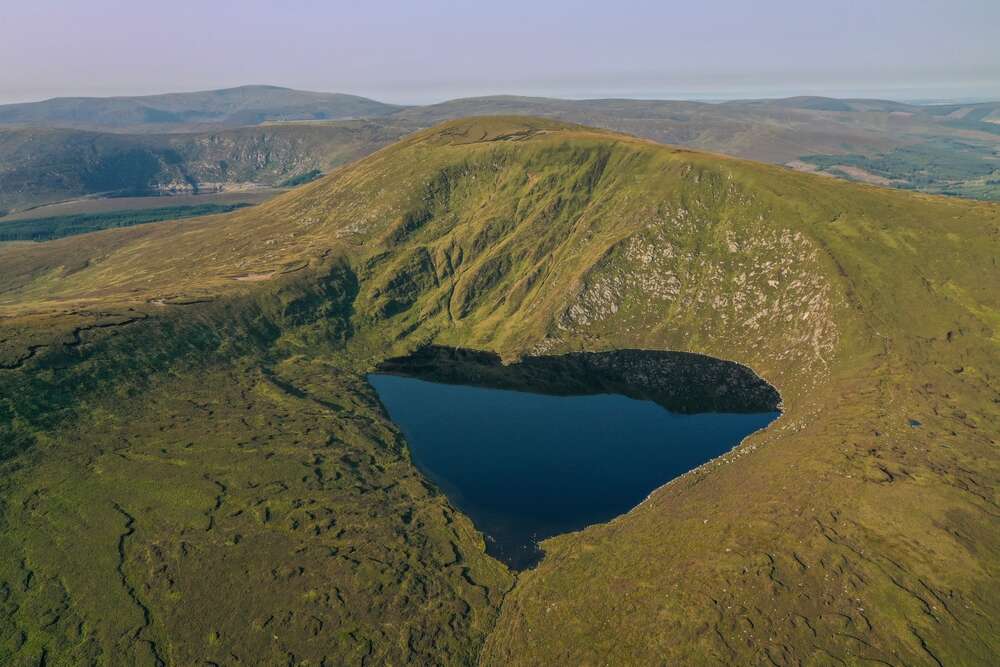 Lighthouses inspire to exploits and give wings. Just imagine, you stand by the turquoise sea on a warm Irish day, breathe in this fresh salty blue air and feel like a beautiful white bird. A petrel that seeks storms.

Wicklow Head Lighthouse has guarded the picturesque Wicklow coastline since 1781. It is a paradise for peace seekers with inspiring and refreshing views of the Irish Sea. The landscape and scenery surrounding the lighthouse provide the perfect backdrop for a unique and memorable stay.

To be precise, there are three lighthouses here. Two old and majestic served their time, and a new one, which regularly pulls out its noble daily service. These two veterans of the naval service were built in 1781. Why were there two on one cape? So that the sailors do not confuse this cape with the cape on Howth. In 1836, the tallest of them was struck by lightning. It burned the entire contents of the lighthouse completely. But the lighthouse was strong at that distant time! Its octagonal mirrors reflected the light of as many as 20 huge candles made from animal fat.

Nowadays, this lighthouse is rented out for a romantic vacation. The lighthouse consists of 6 octagonal rooms built in the void that existed inside the tower when it was first taken into service as housing. It has everything for a comfortable stay: fully equipped kitchen with an eclectic oven, microwave and refrigerator, living room, 2 bedrooms, bathroom with shower and toilet. Arched windows built into the metre-thick walls offer stunning views of the Irish Sea and the surrounding countryside. All this makes this hotel a unique place to stay. And only rocks and fragrant heather are around! This is one love, friends. 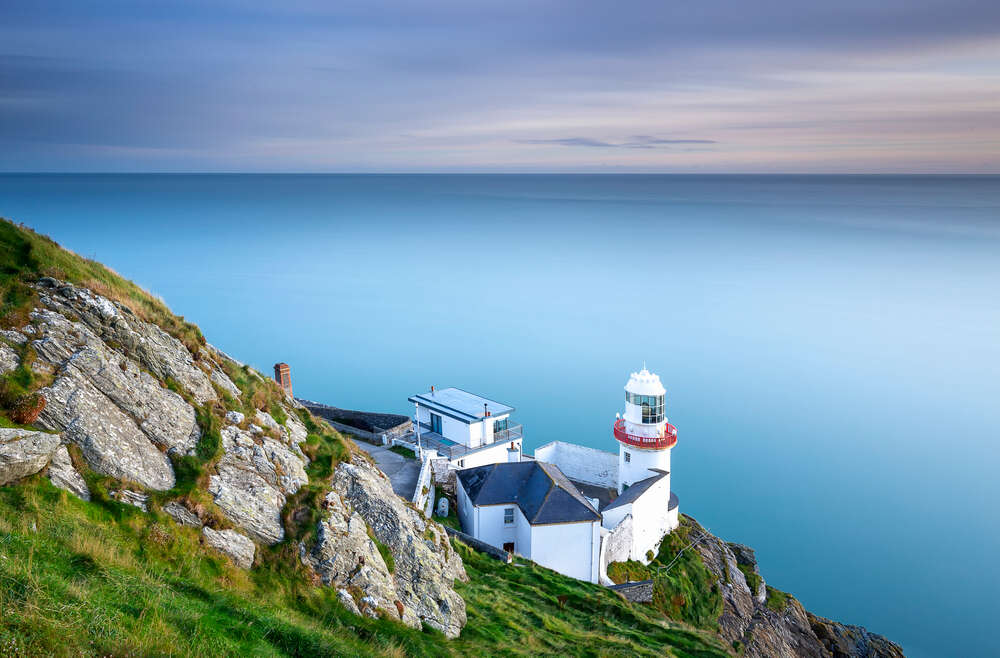 Wicklow is the perfect choice for seeing wild deer in their natural habitat. Not tame and accustomed to people, but real - wild, huge and graceful animals.

There are more deer in Wicklow than anywhere else in Ireland. The region is easily accessible from Dublin, and therefore everyone can enjoy an amazing natural spectacle.

The region itself is extremely picturesque, and a walk in these places will not leave anyone indifferent, here you will find all kinds of natural complexes: rivers, mountains, lakes and magical forests. Speaking about deer, there are two places in Wicklow where they are especially numerous and it is not a problem to find them.

There is one quiet but charming place in the Wicklow Mountains. These are the beautiful gardens of the Mount Usher estate. This estate has a long and not entirely clear history. It is said to have taken its name from the Usher family of Wicklow, whose representative was the local archbishop, born in 1581.

At the beginning of the 18th century, a family, living on the neighboring Rosannagh estate, acquired Mount Ussher estate in addition to their lands and, following the fashion of the 18th century, laid out a beautiful decorative park in the picturesque valley of the Vartry River. Traveling around County Wicklow in 1815, the traveler William Smith O'Brien wrote about the reverent splendor of the garden in the valley of Vartry.

In 1868, another owner of this garden, Edward Walpole, acquired a mill and one acre of land, and expanded the garden. He and his three sons then expanded their holdings to include some of the lands of Rossanagh estate. 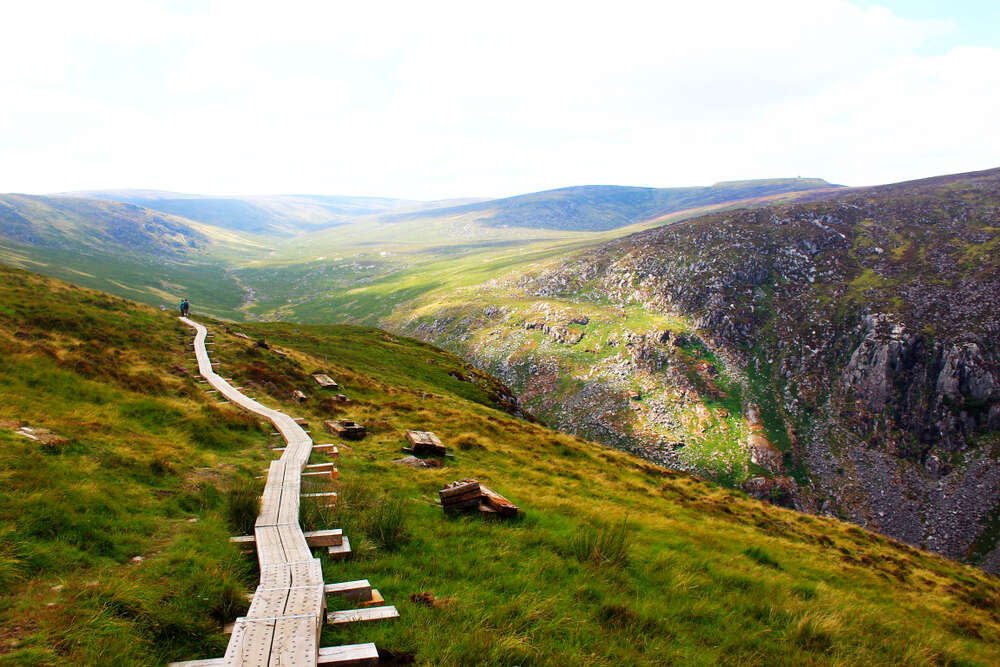 They sought advice from the most advanced gardeners of the 19th century including Edward Augustus Bowles, the famous plant collector, and Sir Frederick Moore from the Dublin National Botanic Gardens.

Back in 1883, William Robinson described this garden in his book The English Flower Garden:

"An old-fashioned windmill, covered with vines, an acre or two of land partly wooded, through which the silvery Vartry River flows." Robinson called it "a charming example of the gardens that might be made in river valleys."

One of Walpole's sons, Thomas, was a good engineer. He created small decorative dams that supply water to calm ponds, the mirror surface of which reflects tall trees and bright shrubs growing along the banks. Thomas Walpole also built charming and romantic suspended iron bridges across the river.

Following the path along the picturesque bank of the river, which leads to the valley, you will marvel at the serene atmosphere of this piece of paradise. The grassy banks of the river are densely planted, and if you look closely, you will be amazed by the assortment of plants - there are as many as 3000 species! 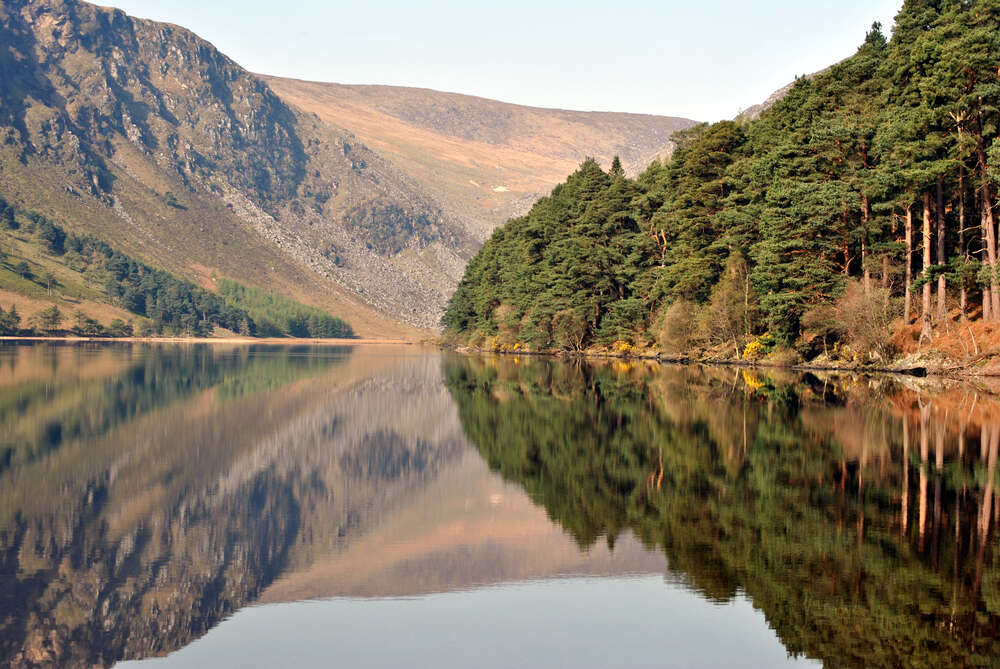 The climate in this place is quite mild. The valley provides additional protection, the rainfall is quite high. There is a great variety of maples, eucalyptus, eucriphia and notophagus. Some trees are very old, grown from seeds brought directly from their homeland.

Seeds of huge eucalyptus trees (there are over 60 species of them) were sent from the botanical gardens of Melbourne and Sydney.

The garden has a huge number of plants from the southern hemisphere of our planet, such as New Zealand kauri, boqueria from South Africa, telopea truncata from Tasmania. Although the main focus is on woody plants, there are many excellent herbaceous plants such as digitorhita, cardiocrinum giant, curly lily, Chinese primrose, and very rare ones such as tecophilaea cyanocrocus. Have you heard of it? No? Then you have to google.

The charm of Mount Usher Gardens lies in the fact that, on the one hand, it is a real paradise for plant lovers, and on the other, a very pleasant place for those who prefer to simply walk along the paths along the banks of the river, admire the reflections of bright colors and bizarre shapes in calm waters.

This is not just a slightly embellished corner of nature. The experienced gardener Walpole knew perfectly well where to add something, and where it would be better "not to touch anything”. Unlike the botanical garden, where the plants are sorted by genus, at Mount Usher, they are selected decoratively, i.e. according to their appearance or according to the place where they are planted. Nevertheless, even plant experts can find a lot of interesting things here.

Well, walk and enjoy the beauty of this garden. You can imagine yourself as a fairy or an elf, because the plants here are simply gigantic.

Wicklow is home to Victor's Way (previously Victoria's Way), one of the most unusual meditation gardens in the world, filled with eerie black granite sculptures. Its creator, artist and sculptor Victor Langheld traveled to India in 1989, after which he not only completely reconsidered his life, but also decided to help everyone around in this matter.

Here you can see 33 black granite and 3 bronze sculptures, the sizes of which vary from 1.5 to 4.5 meters. It took more than twenty years to create such a collection. He explains the concept of the garden as follows:

“Victoria's Way was designed as a contemplative space to be used by individuals (i.e. single wanderers) between about 28 to 60 years of age who feel the need to assess the quality and direction of their lives. It's a sort of mid-life (-crisis) self-reassessment and self-reorientation pilgrimage.” 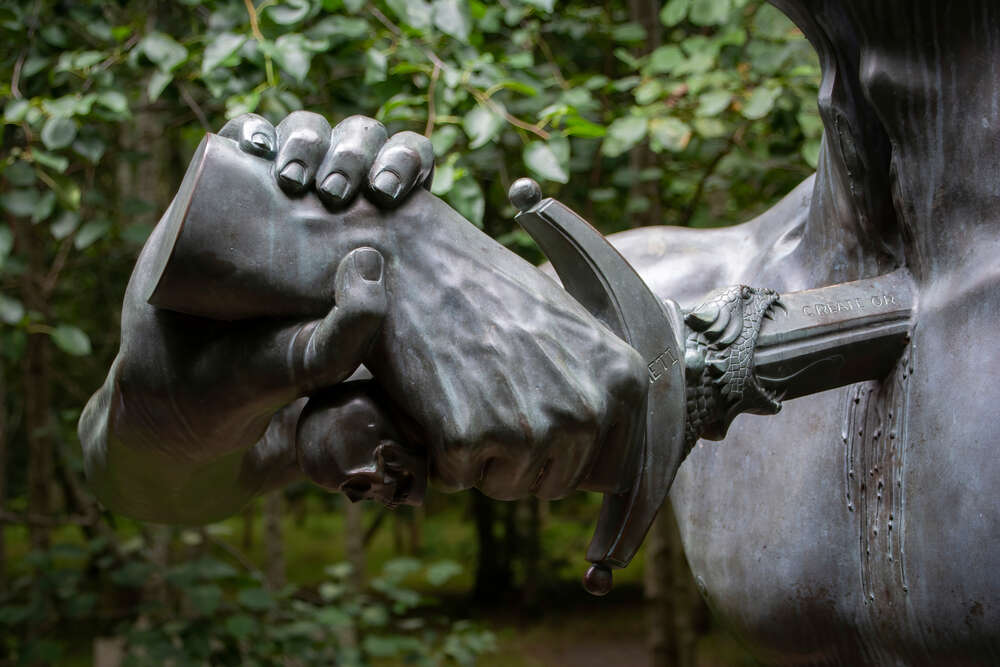 One of the sculptures is a man cutting his own body with a sword. This sculpture is reminiscent of the self-destruction that results from the refusal to dedicate oneself to one's life purpose.

Glen Beach Cliff Walk in Wicklow was closed in 2003 due to the danger of coastal erosion, but it was officially reopened in July 2019. The route of the 4th grade starts at Glen Beach on the outskirts of Wicklow and continues south to Lime Kiln Bay and on to Lighthouse Road before looping again for a total of four kilometers.

The route passes through one of the most picturesque piece of land of the Wicklow coast, offering a unique opportunity to explore nature and learn about local history and archeology.

During the walk, you can see an amazing variety of flora and fauna, and in particular gray seals that swim among the rocky shores, while those who are quite observant can sometimes be rewarded with a sight of dolphins far from shore.

During the walk you will enjoy the unique landscapes, see the sea creatures that swim up to the shore as well as an unusual house-hotel in the form of a tower. Access to some beaches is closed from April to August due to the seal population. Are you interested? Then you definitely need to take a walk around the Glen Beach Cliff Walk. 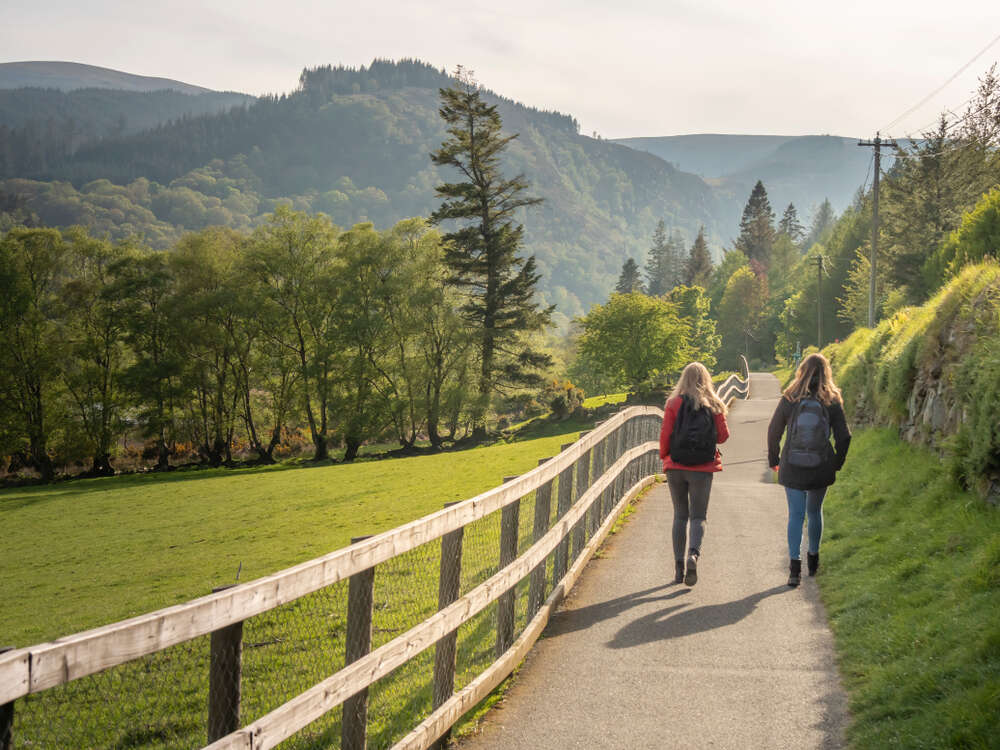 The beautiful Wicklow Mountains form the largest continuous highland in Ireland. This is an amazing area of beauty. The essence of Ireland. A place that can break your heart. And one must have recklessness or faith in order to think of it not as a loss, but as an acquisition.

✈️Selection of air tickets to Ireland right now on Travellizy ✈️
Read more:
➱ Winter is coming: where Game of Thrones was filmed

➱ 10 Hotels With An Incredible History