Winter is coming: where Game of Thrones was filmed

In mass culture, there is a term James Bond Effect. It means that the locations where James Bond was filmed immediately get attention and immense popularity among tourists. Recently, a similar term can be introduced - the Game of Thrones Effect. After all, those places that played the role of locations from the series do not suffer from lack of attention now. And there are a lot of these locations, as the creators of the series traveled all over the world in search of the most beautiful nature or the most majestic fortresses. And thanks to this article, you can follow their footsteps.

In sunny Croatia, one of the main locations of the series was filmed - King's Landing, the capital of Westeros and the seat of the king, Robert I from House Baratheon. The famous Iron Throne stood in Dubrovnik, the country's tourist center, whose popularity increased tenfold after the release of Game of Thrones. The old town was only slightly embellished with special effects, but most of the filming was carried out on the real streets of Dubrovnik.

In the fifth season of Game of Thrones, King's Landing moved to the village of Ston, which attracted the creators of the series with its powerful fortress wall. True, most of what is inside the wall is computer graphics. 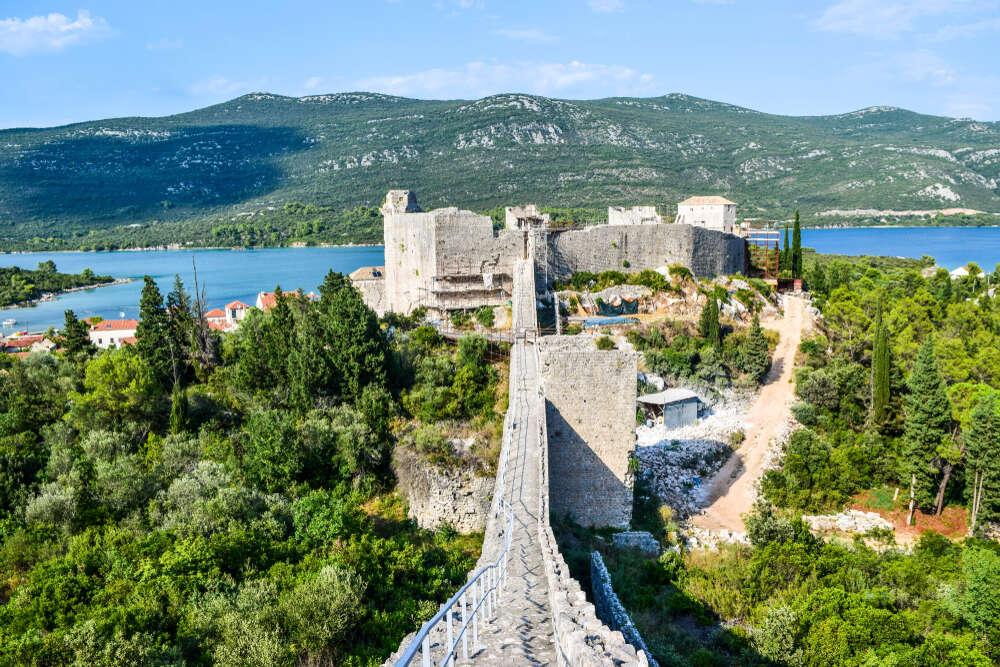 Other locations from the series were filmed in Dubrovnik. For example, the Red Castle from the series is Fort Lovrijenac, which rises on a cliff above the city. In the bay that separates the fortress and the city, the epic Battle of the Blackwater took place.

Lord Varys's intrigues were overheard in the gardens of the village of Trsteno near Dubrovnik. They acted in the series as the gardens of the Royal Harbor. The oasis city of Qarth was filmed on the island of Lokrum, in the local botanical garden. And the headquarters of the sorcerers of Quart from House of the Undying was filmed in Mincheta Tower in Dubrovnik.

Such Croatian cities as the resort of Sibenik also appeared in Game of Thrones. In the fifth season of the series, it was the Free City of Braavos. But do not look for the temple of the Many-Faced God on the pier of Sibenik to follow Arya's footsteps. It was completely drawn using computer graphics.

The city of Meereen, where Daenerys recruited her Unsullied and fought the Sons of the Harpy, is Croatian Split. The suburb of Split, the village of Žrnovnica, also appeared in the series. More precisely, a stone quarry near Žrnovnica. That's where the fight between Daario and a rider from the city of the Great Lords was filmed. The Great Lords themselves were crucified on crosses near the Klis Fortress, a medieval castle 15 km from Split.

In addition, filming of nature was carried out in Croatia. The creators of Game of Thrones went to the Krka National Park with its lagoons and waterfalls.

By the will of the directors and screenwriters of Game of Thrones, this hot country turned into a deserted Essos, through which Daenerys wandered with her dragons. Thus, the Free Cities of Yunkai and Pentos are Ait Benhaddou Fortress. It is interesting that many famous movies were filmed in this fortress - The Mummy, Gladiator, Alexander, The Jewel of the Nile etc. And the Free City of Astapor was filmed in the famous tourist city of Essaouira, which is called the Moroccan hippie city. 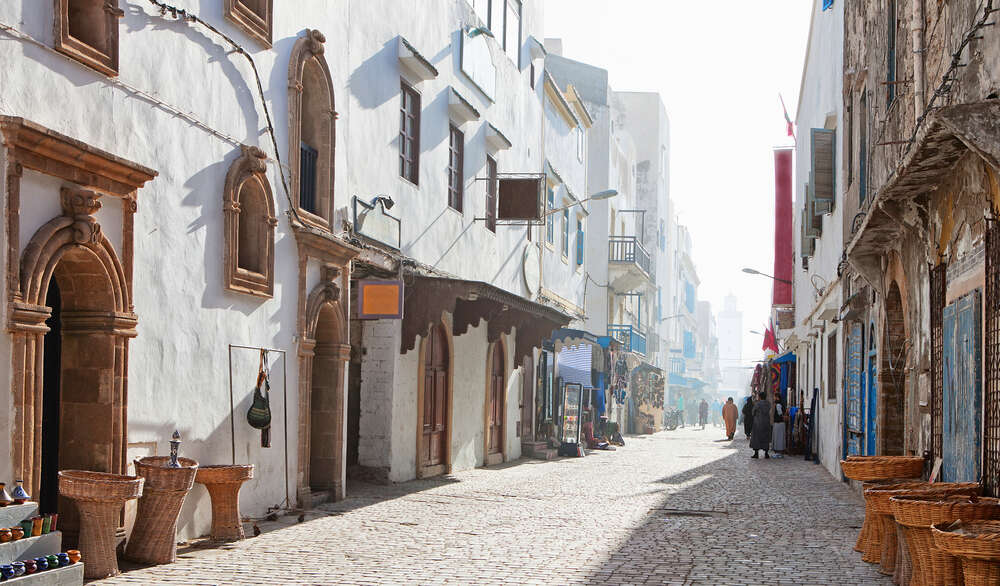 Many locations of Essos were filmed on the well-known in the world of cinematography Atlas Studios near the city of Ouarzazate. Tourists can get on a guided tour through the studio's pavilions and film sets.

The film crew of Game of Thrones reached Spain in the fifth season. For example, Dragonstone Fortress, the birthplace of House Targaryen, was filmed near the Spanish town of Zumaia. By the way, the rocky beaches near Zumaia have a very interesting story in reality, which a local guide will tell you for a modest fee. Another place where the director of Game of Thrones placed the Targaryens is the island of San Juan de Gaztelugatxe, where Daenerys was negotiating with representatives of the north.

Highgarden, the seat of House Tyrell, is Castillo Almodovar del Rio in Andalusia. It's funny that they filmed the same castle as Casterly Rock, the seat of Lannisters. What would have been impossible in the realities of the world of George Martin became possible on the set - two great houses under the same roof.

The spectacular Great Battle was filmed in the Spanish Los Barruecos Natural Park. Daenerys' fire-breathing dragons nested in the former Roman colony of Italica. It is said that the flow of tourists to the ruins of the ancient Roman amphitheater has doubled since its appearance in the series.

It is worth visiting the Spanish village of Peñiscola in order to see the filming location of Meereen. Do not flatter yourself too much, the same view was significantly corrected with special effects, so the real village only remotely resembles a place from the series. But it is still very picturesque. Dorn, the seat of House Martell, was filmed in Peñiscola, as well as in the Almerian Fortress. Dorn's Water Gardens were created in Royal Alcázars of Seville, a very beautiful location, which is really famous for its lush gardens and clear water pools. The Tower of Joy on the border of Dorn is Safra, another Spanish fortress.

Do you remember the Dothraki Sea, the steppe, that the subjects of Khal Drogo roamed around? These are not computer graphics, but real landscapes of the Bardenas Reales Natural Park in northern Spain.

Another place that has skyrocketed in popularity among tourists is the Bullring in Osuna. After filming the series, local restaurant owners even renamed the dishes to "Jon Snow" or "Khaleesi".

North from the Martin's saga was filmed in the real north, in Iceland. The island's government was incredibly happy, because the flow of tourists more than doubled as a result of the Game of Thrones Effect.

Jon Snow and Ygritte bathed in a hot spring in the Grjotagja Cave, where the water temperature sometimes rises up to +50 degrees. Anyone can swim in it, as tourists are allowed into the cave. Nearby, you can see the lava fields of Dimmuborgir, where, according to the plot of the series, Mance Rayder stood with his Wildlings. 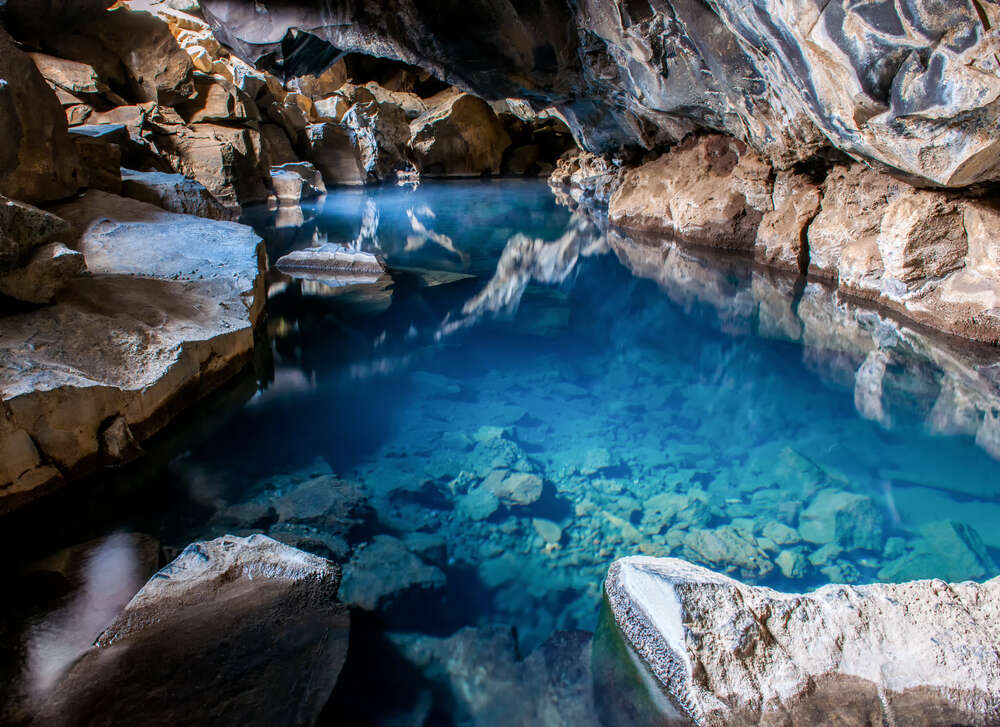 The role of the Lands Beyond the Wall was played by the snowy expanses of the Icelandic Vatnajökull glacier. It is interesting that in reality this is a very popular tourist resort, and not in any way a deserted ice wasteland. Hofdabrekka, another famous resort, acted as the Frostfangs. The villages of the Riverlands were filmed in the Thingvellir National Park, a natural site from the UNESCO list and one of the main attractions of Iceland. The second major attraction and the country's most photographed mountain, Kirkjufell, appeared in Game of Thrones in Bran's visions of the White Walkers.

In addition to Iceland, the Northern Lands from A Song of Ice and Fire were filmed in Northern Ireland. Thus, the northern forests, where the Starks find their direwolves, is Tollymore Forest Park, and Winterfell, the residence of House Stark, is Ward Castle. It is through its gates that Robert Baratheon enters shortly before his tragic death while hunting.

For a stroll down the Royal Route, head to the Dark Hedges. According to Instagram statistics, this is the most photographed place in the country. And if you are excited by the images of people from the Iron Islands, then you need to go to Murlough Bay bordering Scotland. Pike Island was filmed in the fishing village of Ballintoy, and Stormlands was filmed in an area called Larrybane. The distance between these two locations can be easily covered on foot in 30-40 minutes. 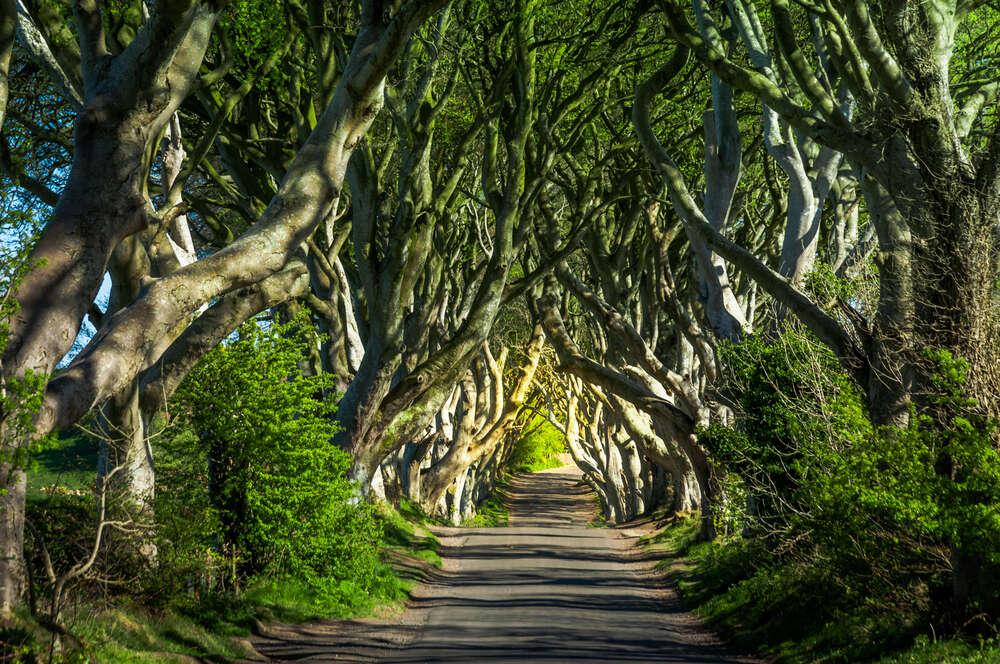 Would you like to see the cave where the Red Priestess Melisandre practiced witchcraft? Then go to the north-east of Ireland, to the Cushendun Caves. The fire witch burned the old gods on Downhill Beach.

There are so many castles and forts in Malta that, if desired, they could accommodate all the great houses from Game of Thrones. Here, in the capital city of Mdina, the gates of King's Landing were filmed, and in the first season of the show, the role of the Red Castle was played by Fort Ricasoli, which was built 300 years ago by the Knights Hospitaller. Also, the scenes in the Red Castle were filmed in San Anton Palace, the official residence of the President of Malta. The catacombs under the castle are the catacombs of the Maltese Fort St. Angelo.

The wedding of Khal Drogo and Daenerys took place near the Azure Window, the most cinematic location in Malta. The Clash of the Titans, Odyssey and a number of other movies were also filmed here. Unfortunately, in 2017, a strong storm destroyed this unique natural structure. 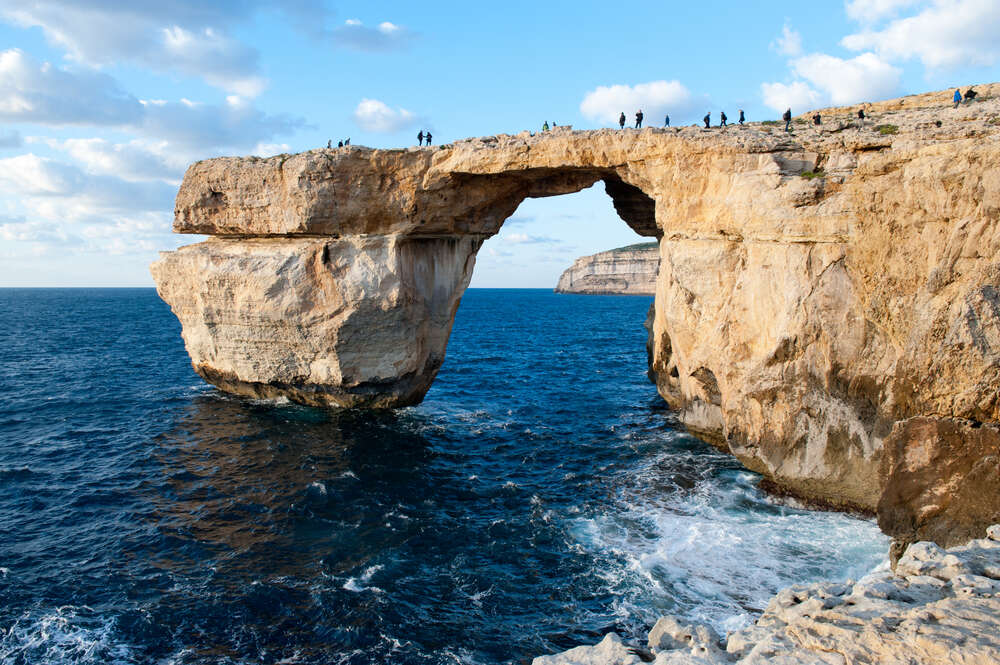 Ned Stark was beheaded in Fort Manoel, transformed into the Great Sept of Baelor by the will of the creators of the series.

In this country, only one location of Game of Thrones was filmed - Winterfell. Its role was played by the medieval Loch Doon Castle, once the main film set for the Monty Python comic troupe. But the castle is in a very bad condition now. 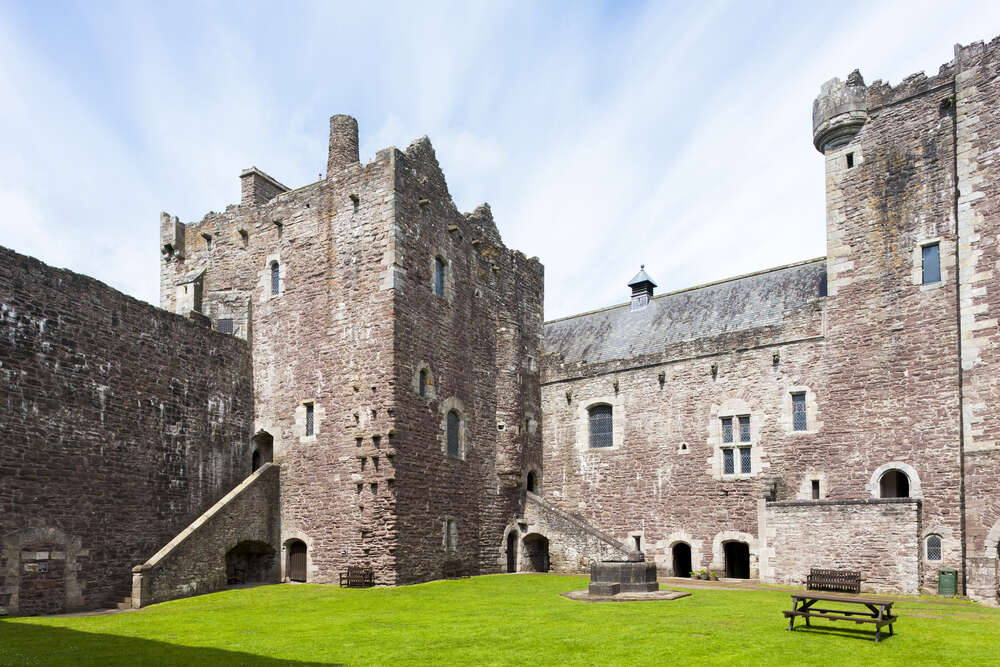 Even the longest vacation is not enough to visit all the locations featured in Game of Thrones. So choose a few of your favorites, book airtickets and travel through the lands of Westeros. You can also download footages from the series to your smartphone and compare them with real locations.