The City of Contrasts - Frankfurt am Main

Each city is unique in its own way, keeping its own history, character, atmosphere, and making visitors fall in love with itself from the first acquaintance. There are also cities of contrast with a mixture of cultures and times. They offer a whole bunch of completely different architectural sights and emotions. There may be conflicting reviews about such cities. You need to understand these cities, study them, feel them, and only then to collect a general impression. That’s exactly what surprising Frankfurt am Main is. 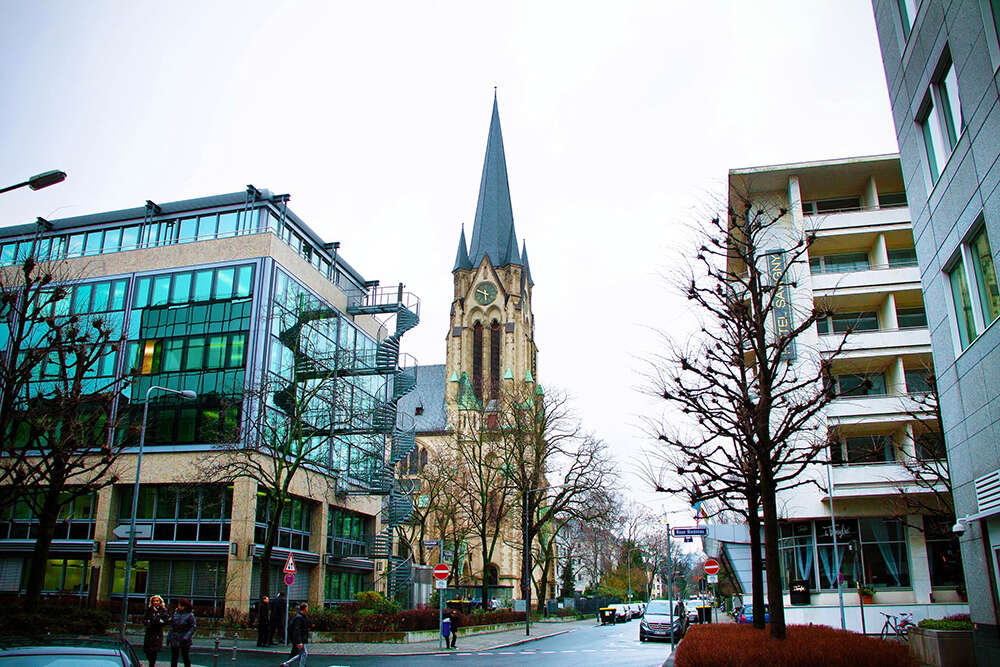 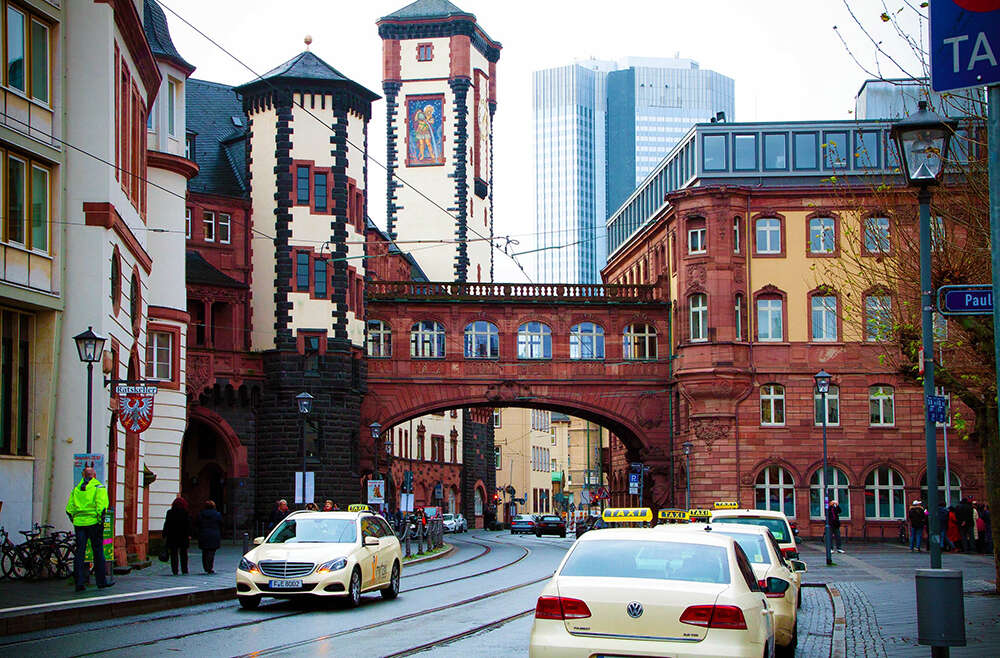 Frankfurt am Main is the business capital and the largest economic center in Europe. It is considered to be the most technologically advanced and modern city in Germany. Every fifth citizen of Frankfurt works in the banking or finance sector. As is well known, the Germans take their rest on holidays and weekends very seriously. However, in Frankfurt, Saturday is a working day for many; bank offices and stock exchanges are open here. 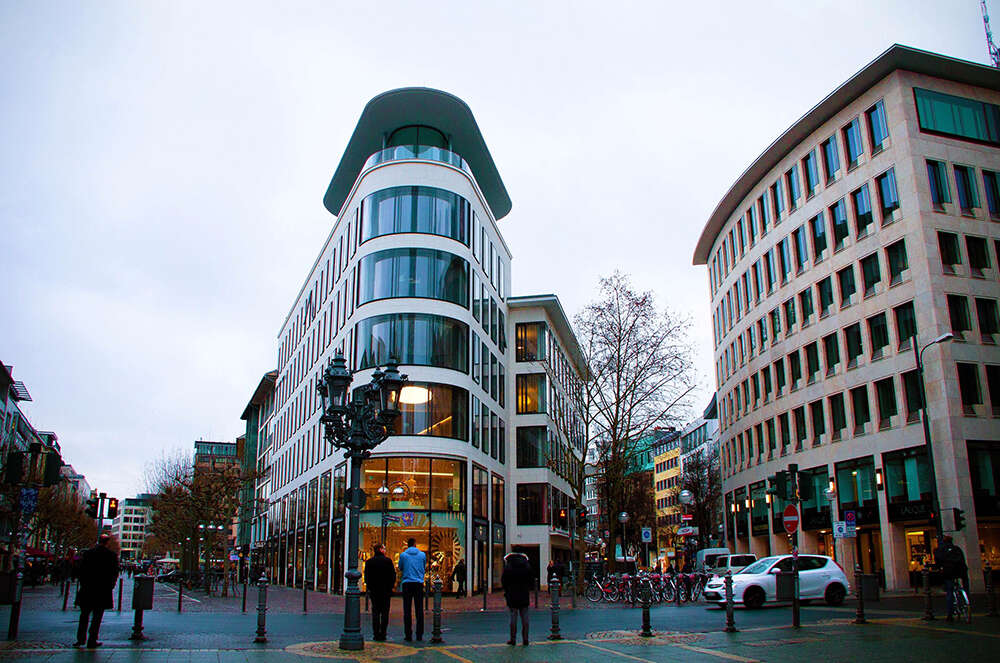 Frankfurt am Main is one of the main transport hubs in Germany, which has the largest airport with an area of ​​26 square kilometers. It receives flights from over 250 cities around the world. 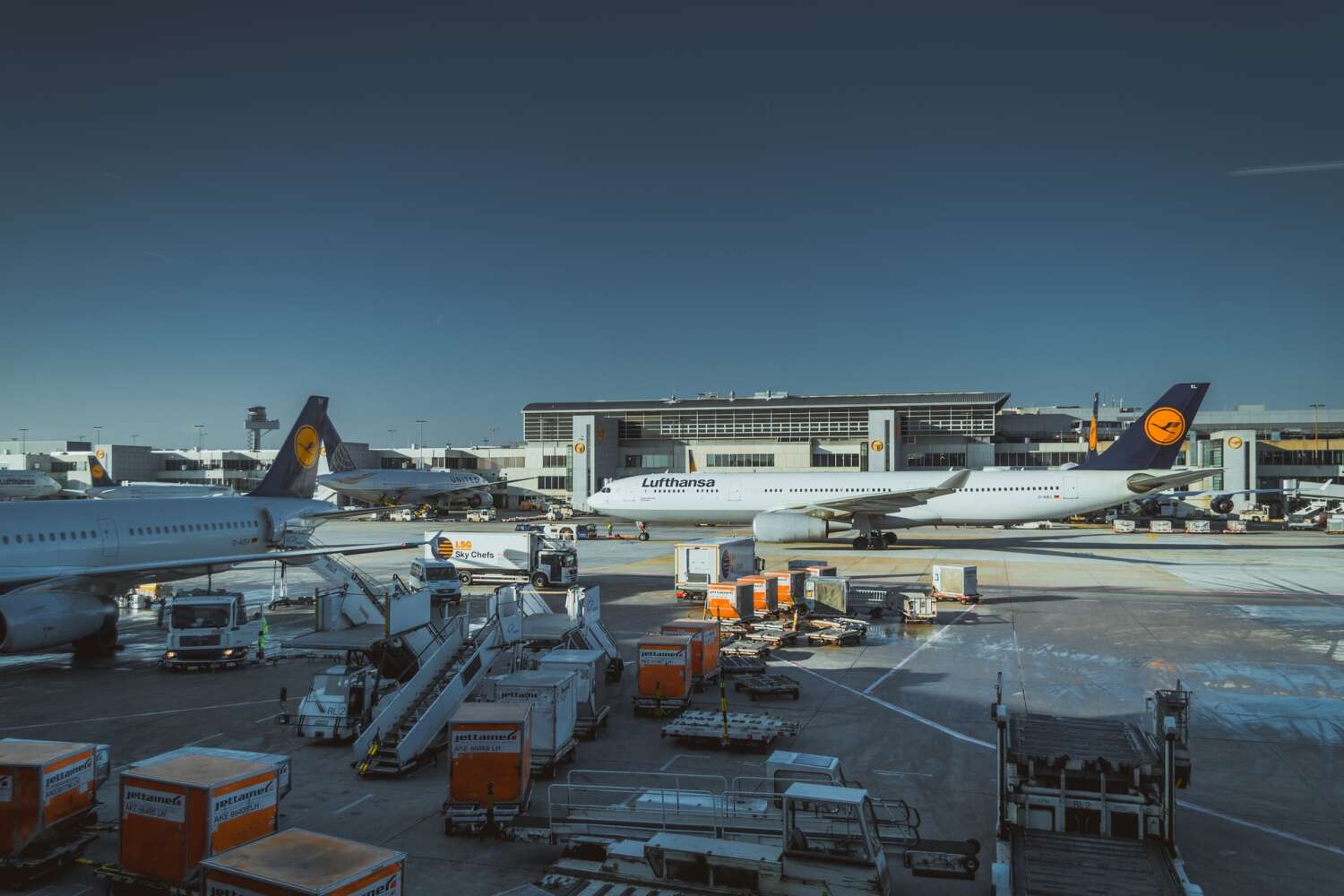 The main attraction and difference of Frankfurt from other German cities are skyscrapers. Today in Frankfurt, there are 30 buildings that are over 100 meters tall and 14 skyscrapers that reach a height of 150 meters. The city is often called "German Manhattan".

Frankfurt is home to the Commerzbank Tower, one of the tallest skyscrapers in Europe. Its height, including the spire, is 300 meters. The building is located in the heart of the city, on the Kaiserplatz square.

The Commerzbank Tower is surrounded by small medieval houses, which creates an interesting and at the same time harmonious interweaving of different eras. 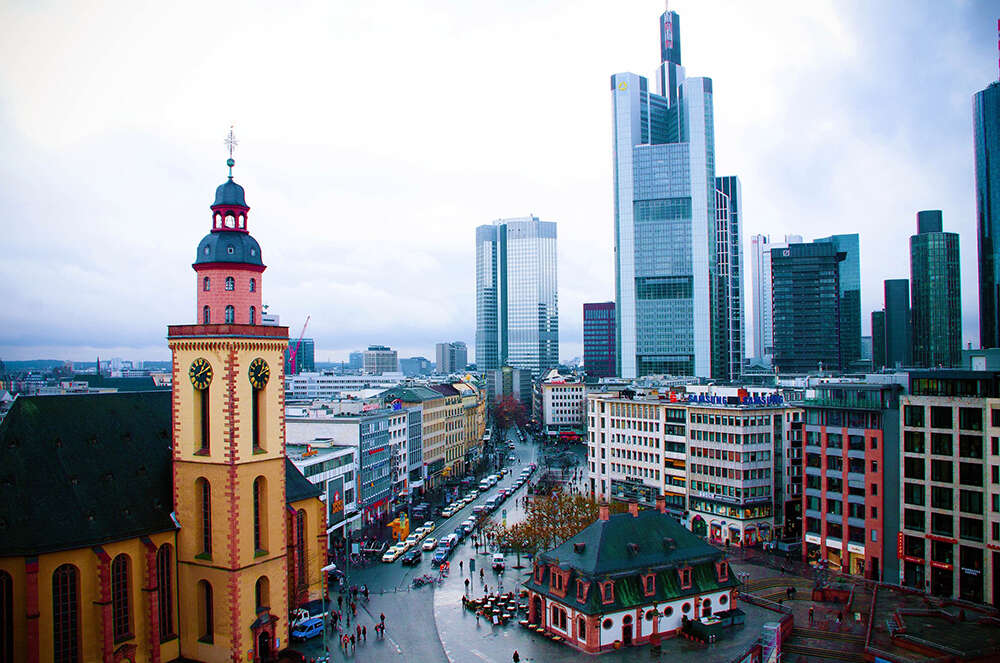 The architecture of Frankfurt is amazing in contrasts: here, huge glass-concrete skyscrapers are located next to traditional European candy-gingerbread houses in the neighborhood. The thing is that during the Second World War, the city was almost completely destroyed. Frankfurt had to be recreated and equipped, so all buildings in the city are modern, they are no more than half a century old. However, the city turned out to be so colorful that walking through the districts gives the impression that you are traveling through different eras and times.

The Alt-Sachsenhausen district is a typical old Germany at its finest. The Museumsufer offers a stroll along with chic mansions and museums, and the Bankenviertel rises over the city and shines with thousands of lights in the evenings. 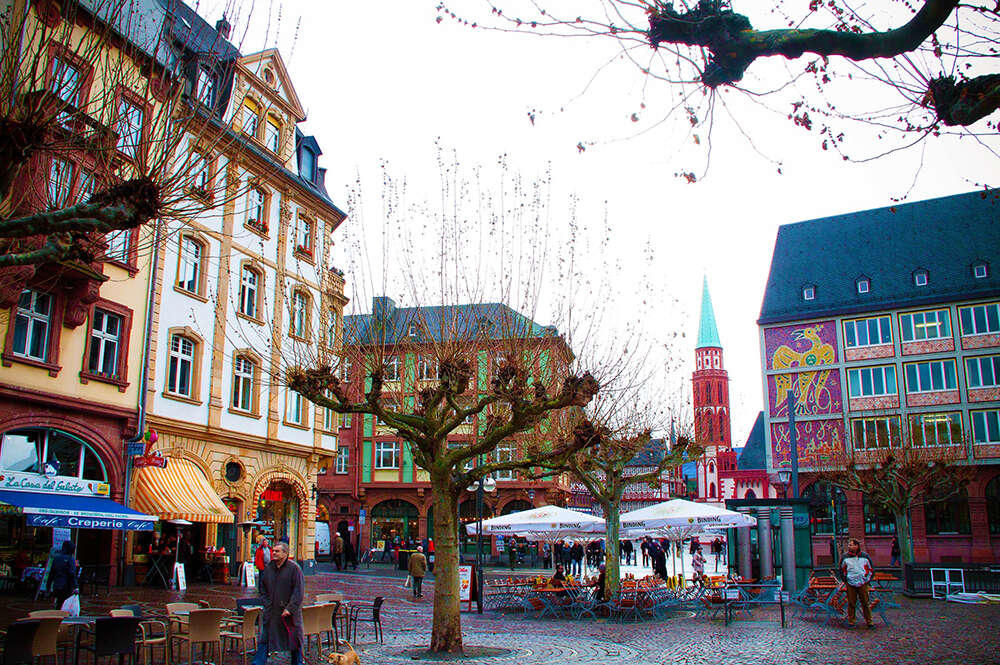 Alt-Sachsenhausen is the historical part of the city. Stroll along the cobbled streets among the old houses and don't forget to try the local 7-degree apple cider. It is poured here in all taverns and street cafes. Cider has been made in Frankfurt for over two centuries. It is prepared without yeast, it contains only freshly picked apples. In summer, in August, the Cider Festival takes place here. The famous Henninger beer is also brewed in the same area. 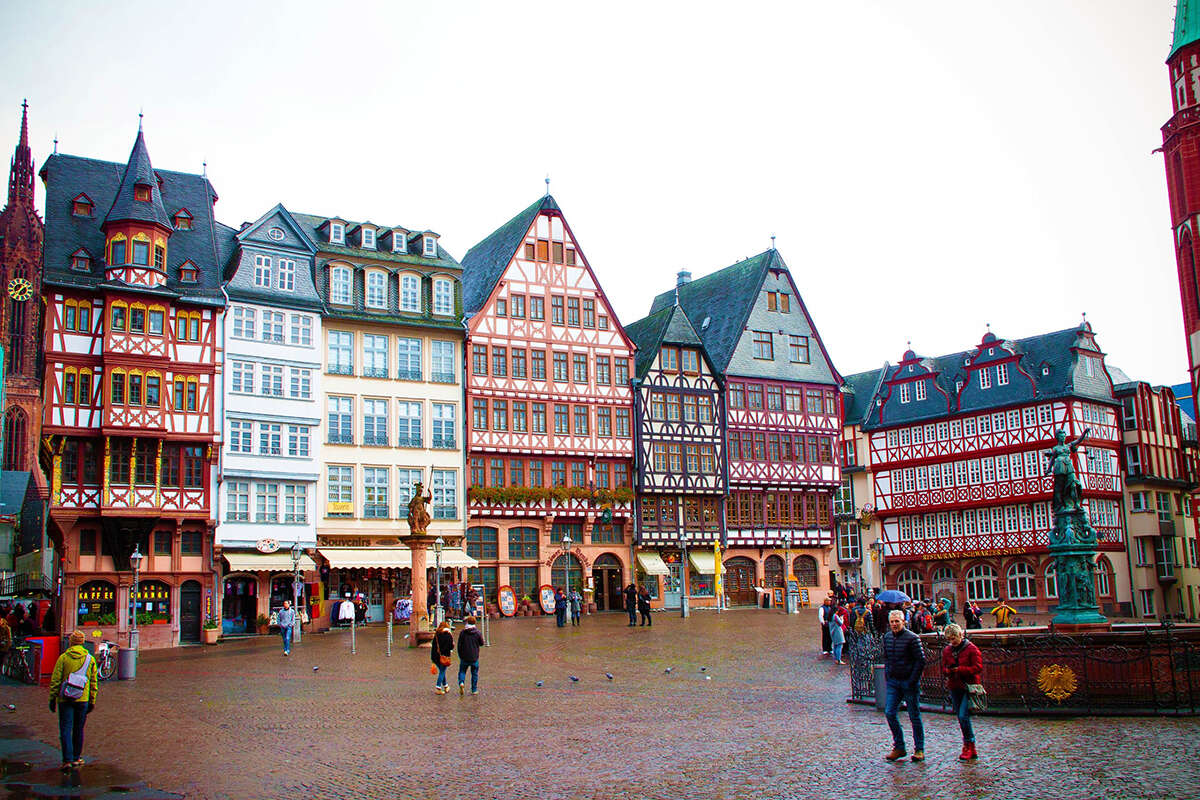 ● Frankfurt Cathedral (Imperial Cathedral of St. Bartholomew) was built in the 12th century. The cathedral was destroyed by bombing during the Second World War. However, it was later restored to its original form, with the precision of every detail. The height of the tower of the cathedral is 95 meters. Upstairs, there is an observation deck, which offers stunning views of the banks of Frankfurt and the Main River. You need to climb a spiral staircase to the height of the 7th floor. The entrance ticket to the observation deck will cost 3 €. 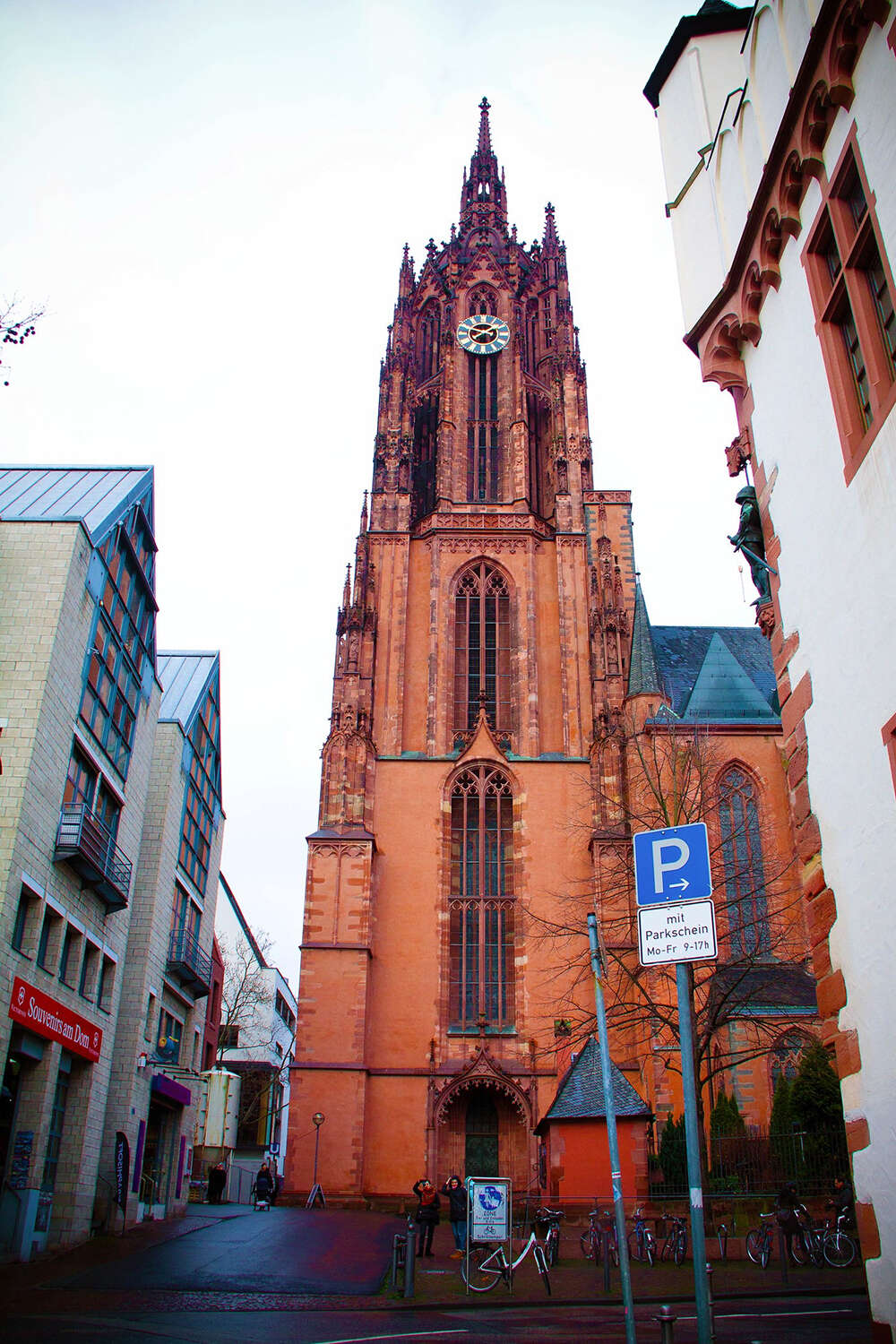 ● Until 1870, the Old Bridge was the only bridge across the Main, connecting the Sachsenhausen district and the Old Town. During the war, in 1945, the bridge was exploded and rebuilt only in 1960. 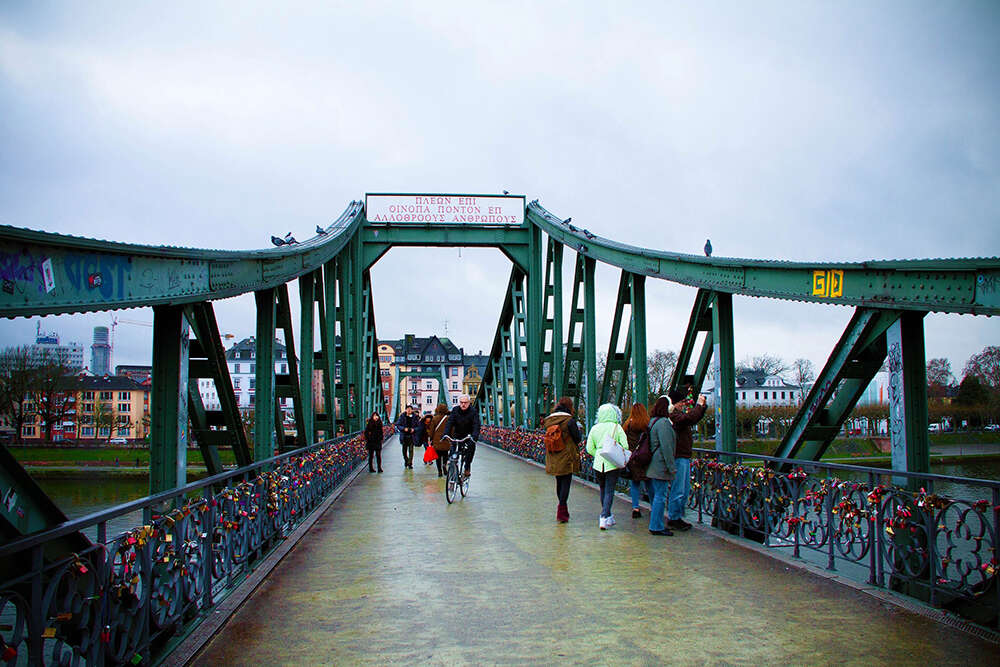 ● The Alte Oper (Old Opera) was built in 1880. However, like most of the city's attractions, having worked for 60 years, it was completely destroyed during the war. In 1981, the opera was restored, giving its facade a historical look, and the halls - modern. Today, not only operas but also concerts and balls are held here. 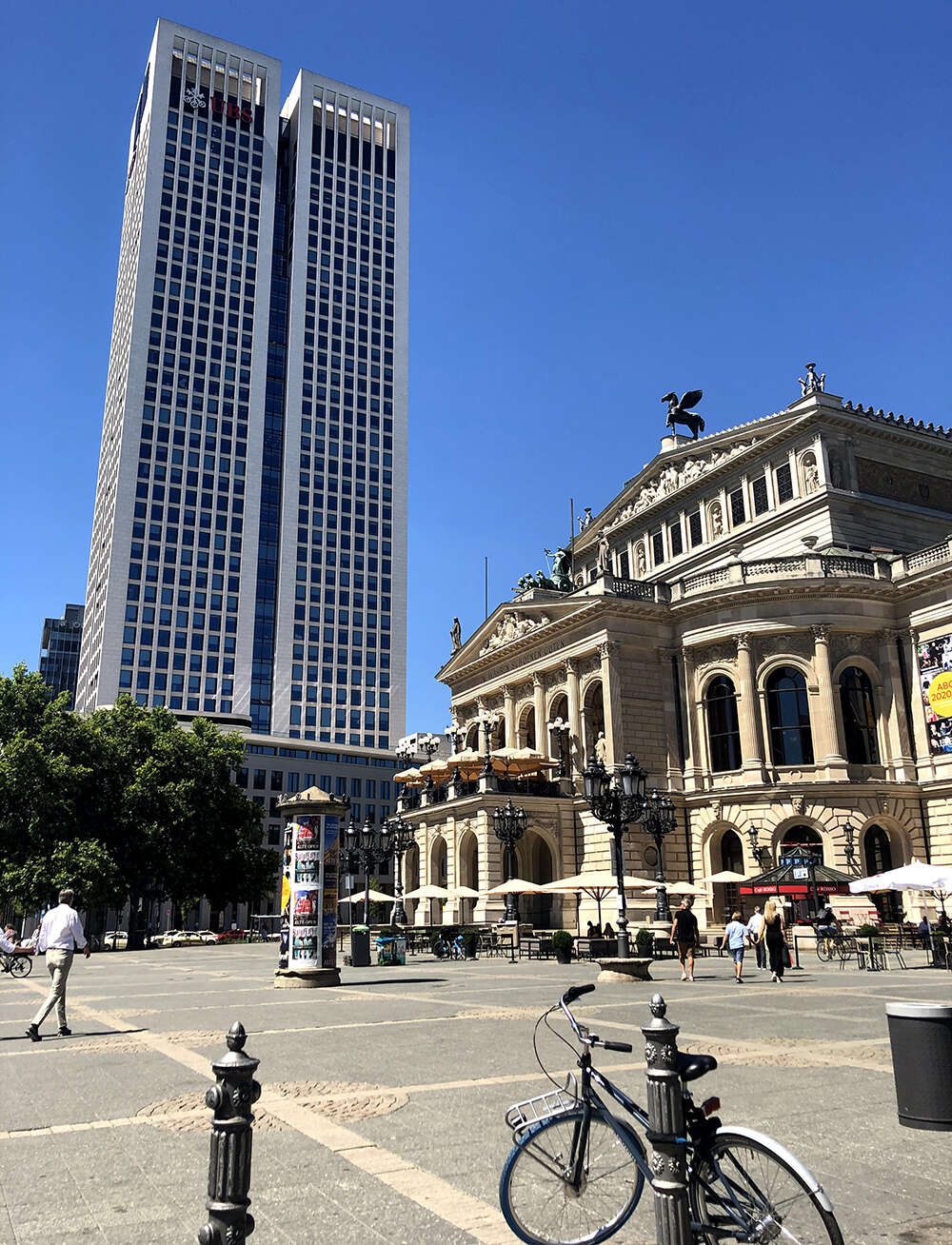 ● St. Paul's Church today is a building where social events are held. The church was built in 1833 and was reconstructed after the war. Since that time, the building has been declared an urban cultural center. 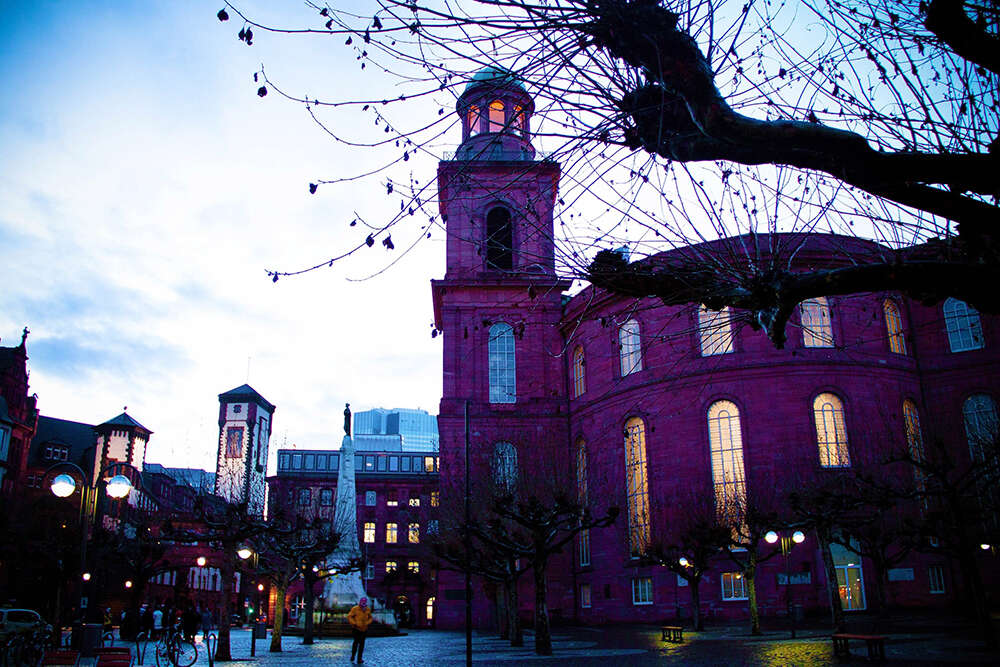 ● Goethe House. Until 1944, on the site of this museum, there was a house, where the famous poet Johann Wolfgang von Goethe was born in 1749. After the war, the building was recreated according to the records of the poet's house, following all the details of the interior and structure. Poet's things, furniture, letters, and a personal library are kept inside.

● Bankenviertel is completely built up with skyscrapers. The famous Eurotower skyscraper houses the headquarters of the European Central Bank. In front of this building, there is a large blue “€” monument.

● Commerzbank Tower is the main symbol of Frankfurt. Until 2003, it bore the title of the tallest building in Europe.

● Deutsche Bank Twin Towers are two towers with mirrored facades. The twin towers are 155 meters high. The skyscraper was built in 1984. 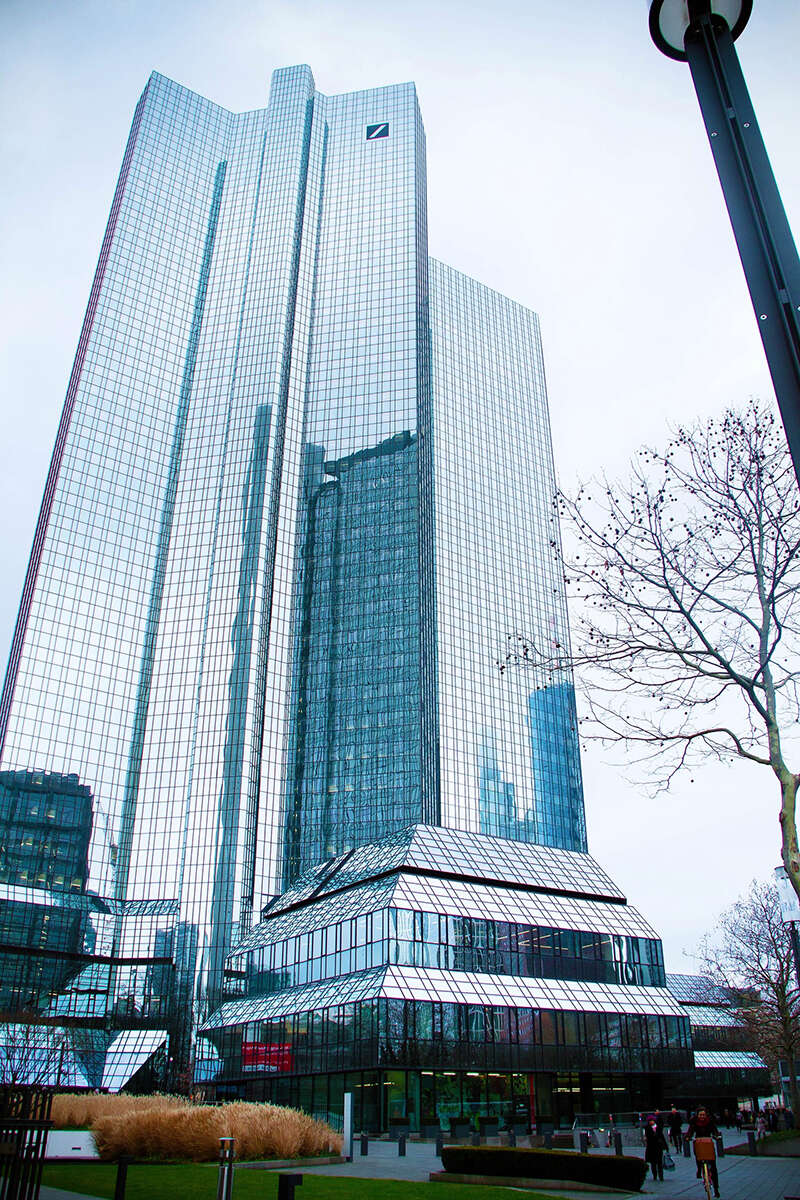 ● Main Tower is the youngest skyscraper in Frankfurt. This is the only skyscraper in the city equipped with an observation deck. It offers a magnificent view of the entire city, as well as the Odenwald mountain range. The site is located at an altitude of 200 meters. The entrance fee is 5 €. 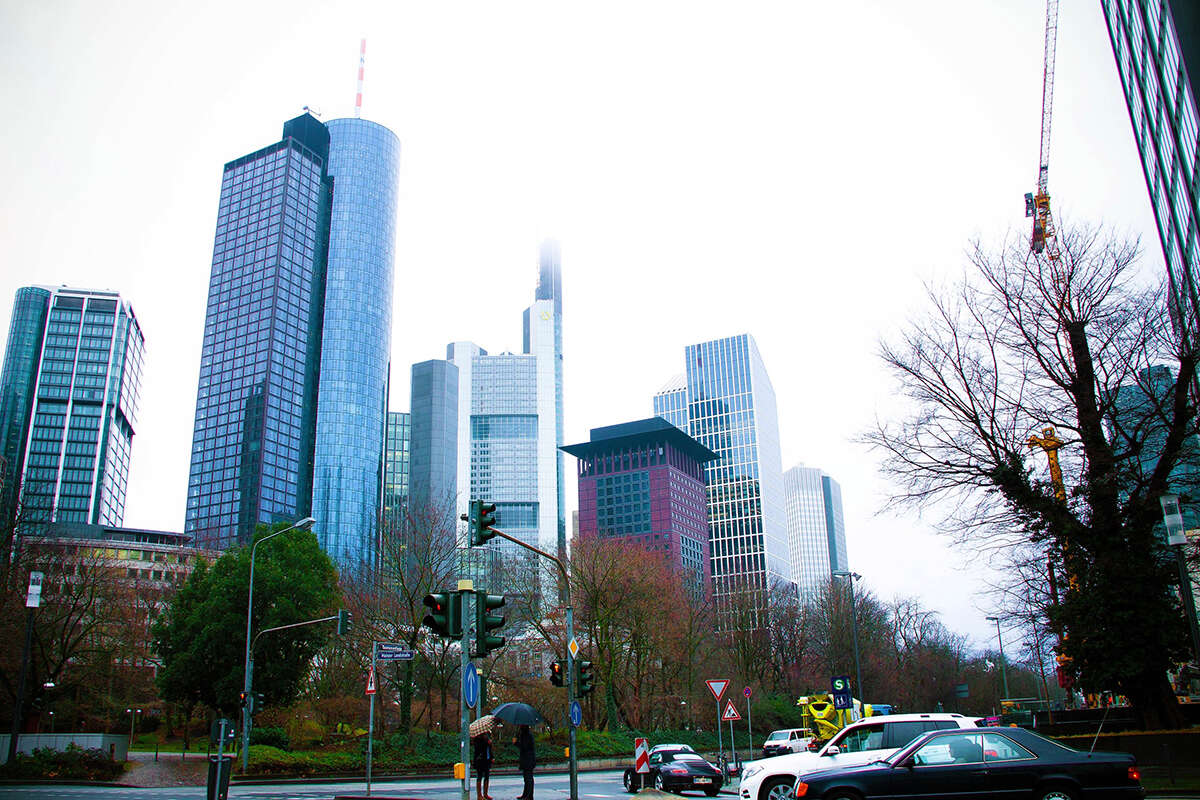 ● Messeturm skyscraper ranks third in the list of tallest buildings in the European Union. Its height is 256 meters. In front of the building, there is a sculpture depicting a worker with a hammer in his hands, which is a symbol of the economic prosperity of the city. The skyscraper was built during this period in 1990.

● Städel. The collection of the museum has almost three thousand exhibits and covers several eras in the art of Europe. The value of these collections is equal in importance to the collections of the Louvre in Paris and the New York Metropolitan. 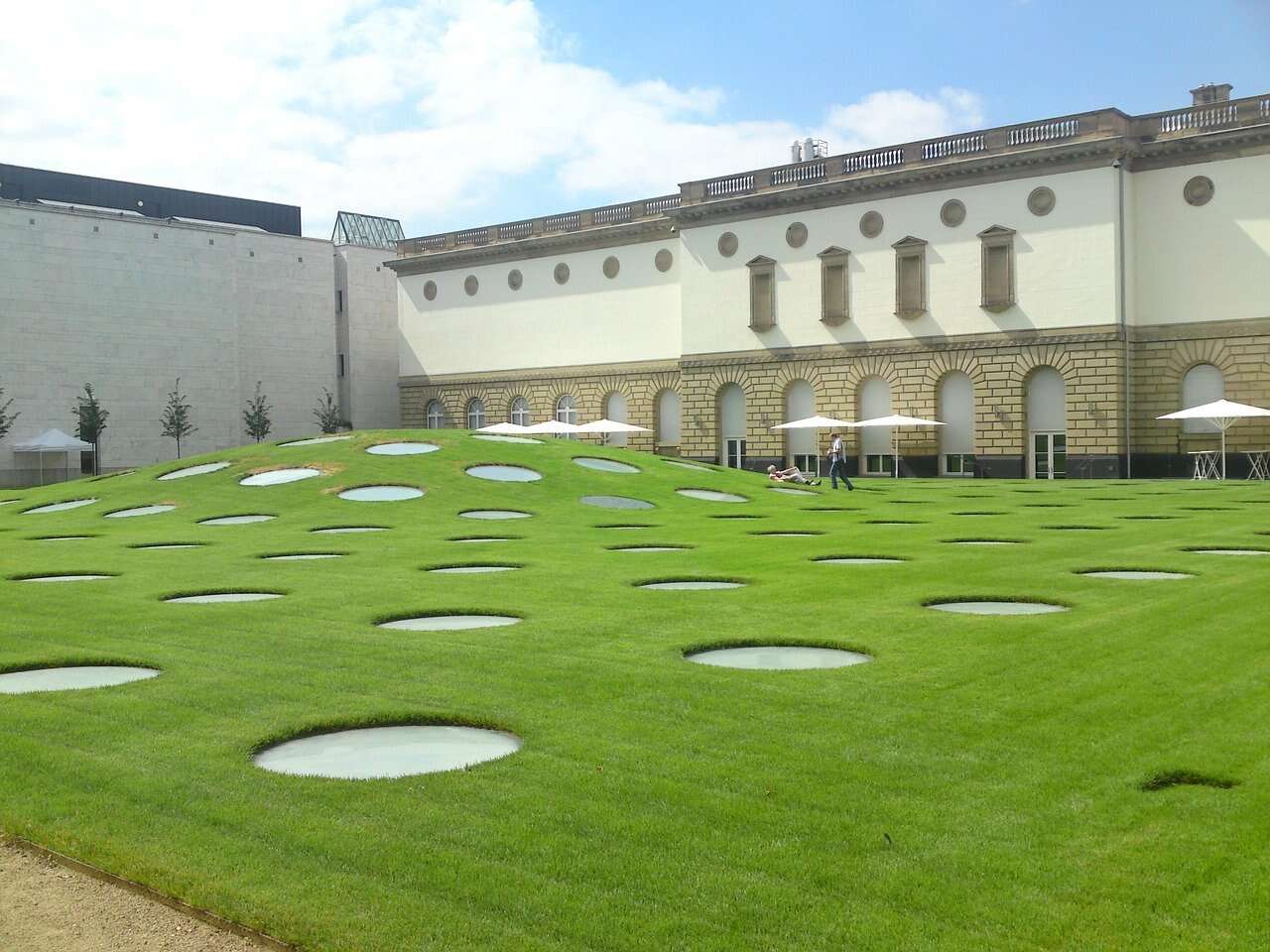 ● Senckenberg Natural History Museum is a German Jurassic Park. It houses one of the largest collections of dinosaur skeletons, extinct animals, and birds in Europe.

● Palm Garden consists of several pavilions with plants from completely different climatic zones. You can find here the Palm House, Tropicarium, Cactus Garden, Rose Garden, and Subantarctic House. The cost of visiting the garden for adults is 7 €, for children - 2 €. 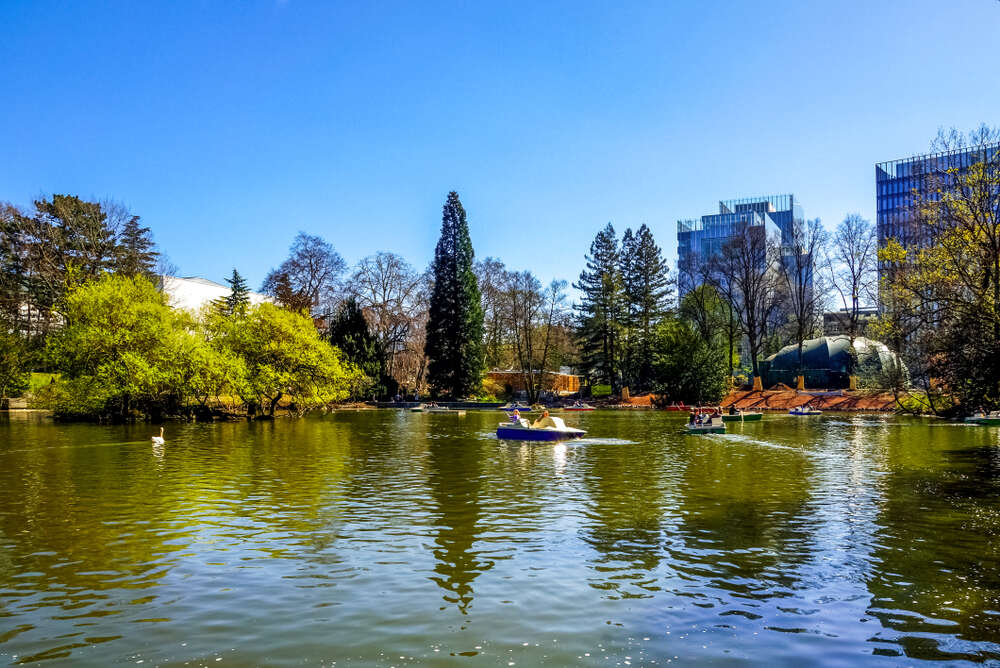 ● Bethmannpark is a legacy of the famous Bethmann banking family. The magnificent park contains a whole oasis of greenery, as well as a beautiful Chinese garden with a pagoda in the middle. 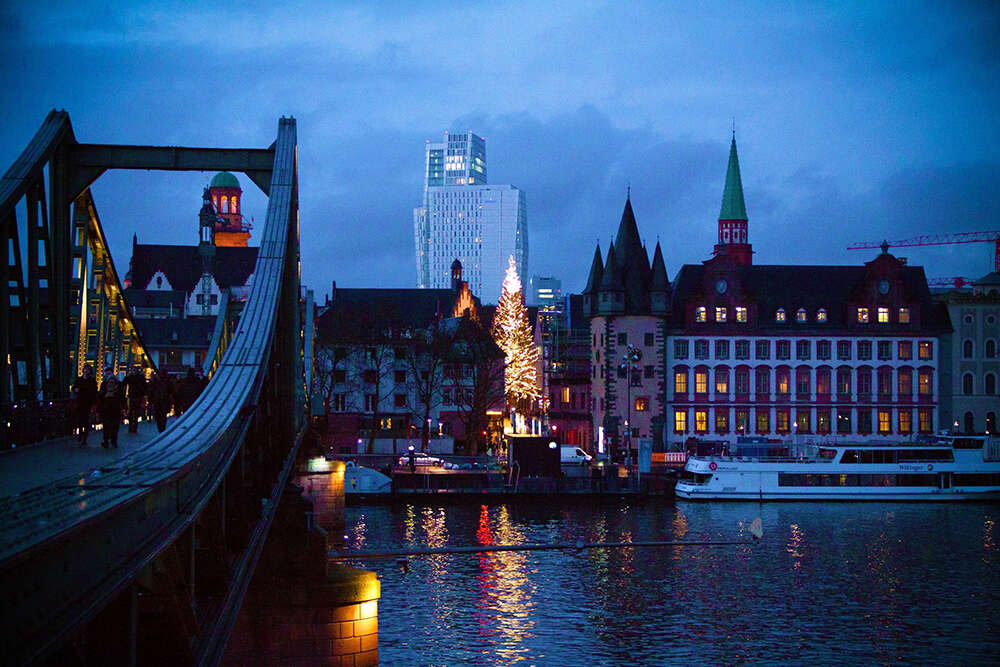 Frankfurt am Main is such a big city that you need to spend here more than one day to get to know it. To truly experience Frankfurt, you need to see the sun rising from behind the giant skyscrapers and the contrasts of urban architecture from the observation deck. And in the evening, you need to sit on the embankment, watching the city light up and shine the most bright colors against the background of the majestic old bridge! Only then you can definitely say about your feelings for Frankfurt, and we are almost sure that these will be feelings of true admiration!