The legendary trilogy "The Lord of the Rings" and "The Hobbits" won the hearts of millions of people. Many people still dream of visiting the magical Middle-earth. And, as it turned out, these dreams can easily come true. All the action took place in New Zealand. And the filming locations are still open to the public today. You can find a special effects studio in Wellington and visit the master who created THE ring.

Travellizy Team will tell you where on the planet you can admire fairytale villages, walk the footsteps of Frodo Baggins and the trails of the hobbits.

When the trilogy was filmed

From 1999 to 2000, all 3 Lord of the Rings films were made in just 400 days. Mount Olympus is located in Kahurangi National Park, where the first part of the trilogy was filmed. And the birch forest near the city of Queenstown became the prototype of Lothlorien, the house of the elves of Middle-earth.

NZ landscapes and photographs do not need any graphic processing. They impress everyone with their beauty. That is why filmmaker Peter Jackson chose this country. The director managed to find a farm in New Zealand without a trace of civilization. That's where the region of Shire was eventually built.

More than 150 real locations were used by the director for the key scenes, including Hobbiton, Rivendell and Mordor. The rest of the scenes were digitally compiled in Wellington and Queenstown.

A pleasant bonus for NZ was € 170 million, which the country received thanks to film making on its territory. They even organized ministry of the Lord of the Rings here. Its goal was to analyze the opportunities given to the state with the film production.

The village of Hobbiton, Shire, and the town of Matamata

The village was artificially created for the filming of The Lord of the Rings and The Hobbit. The settlement was kept as a tourist attraction and it was the right decision. Crowds of tourists come to the village on a tour.

The town is located near a lake in the lowlands. As you approach, you can see the usual NZ landscape: green hills and grazing sheep. Trained workers take care of the garden, butterflies, bees and sheep. This helps to maintain the atmosphere of the film. Therefore, the flowers still bloom, weeds don't grow outside the houses, and butterflies flutter around all the time. 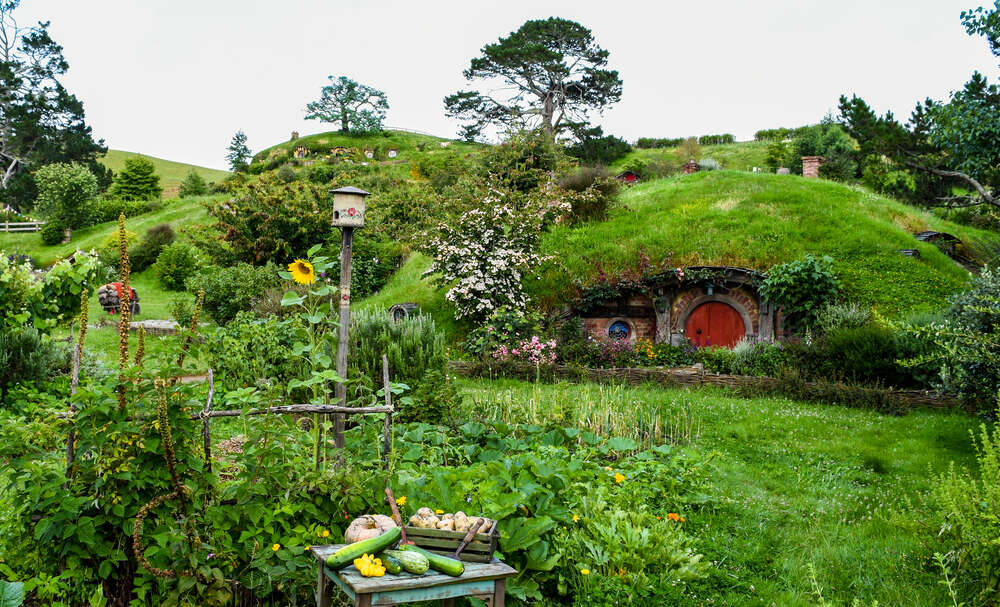 There are 40 earth-sheltered houses in the town, most of them are just dummies. But each house has its own unique door that characterizes temper and tastes of its residents. The details of everyday life are carefully preserved near the houses: benches, baskets, brooms, jars.

Interestingly, Tolkien's book states that the main character lived under a tree. Therefore, an artificial tree had to be created on the hill for almost € 1 million.

Tourists are given food to feed the sheep. You can watch how the sheep are cut and feed the little ones with milk. There are several cafes on the territory of the attraction where you can have a snack. There are Gift Shop and Market where guests can taste freshly baked bread, New Zealand cheese, smoked fish/meat.

On the territory, it is forbidden to climb into holes and make a mess. The fences are electrified and can electrocute (this is done especially for sheep).

Hobbiton is located on the North Island, in the vicinity of the town of Matamata. The road from Auckland takes up to 2.5 hours. The bus ticket costs € 35. There are several formats for visiting the village: film tour, banquet tour, Christmas tour, morning tour or private tour. A private tour (up to 6 people) costs € 600 and lasts 2 hours. A standard excursion will cost an adult € 52, for children up to 16 years old - € 26, for children under 8 years old - free.

Tongariro National Park has become the backdrop for the land of Mordor, a region in Middle-earth. Take a look at the 2,000-year-old Mount Ngauruhoe where the ring was forged. The mountain is, in fact, a heap of ash. The ascent will take 5-6 hours, which is not easy. But it is rewarded with a magnificent view. 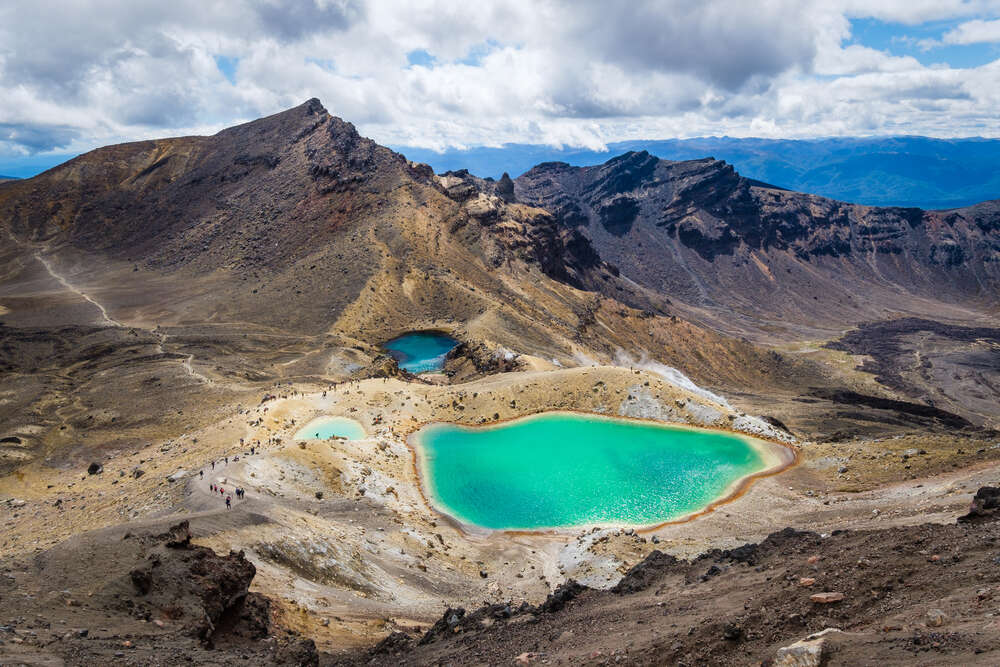 On the highest peak of the island, on the slopes of Mount Ruapehu, the Emyn Muil area was filmed. The mountain served as a prototype for Orodruin, the fateful volcano. The Black Gate of Mordor is located on the same mountain, in the Tukino ski resort. At the Whakapapa ski resort, Isildur managed to cut off Sauron's ring finger. In the same places, Gollum was caught by Frodo and Sam. Gollum fished in the Ithilien River (actually the Mangawhero River).

Putangirua Pinnacles Scenic Reserve and the Path of the Dead

On the North Island, near Wellington, there are the Putangirua Pinnacles. They consist of unusual rocky peaks formed by water erosion. Gimli, Aragorn and Legolas climbed these peaks to awaken the army of the dead. It's a hyper-atmospheric place that will impress even those who haven't watched the trilogy. 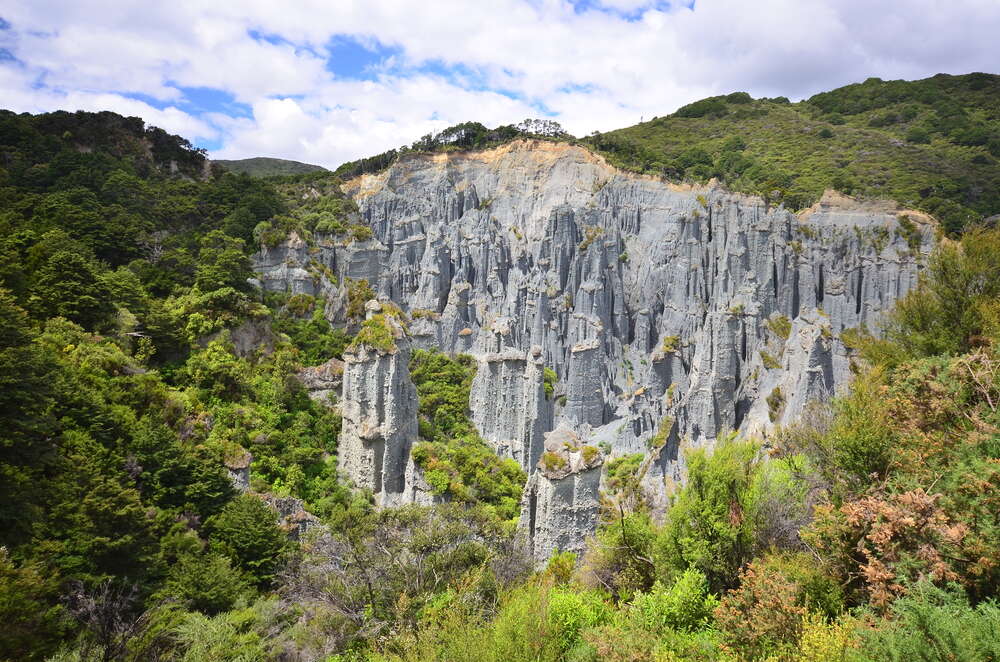 The Kingdom of Rohan and its capital Edoras, surrounded by high snowy mountains, is located on the South Island, on Mount Sunday. The Palace of the Kings was built here with houses, a picket fence and a gate. But the rest of the houses are a computer effect. After the end of the work, the filmmakers removed all the scenery for filming very carefully. Therefore, only fantasy can restore certain frames from the film. 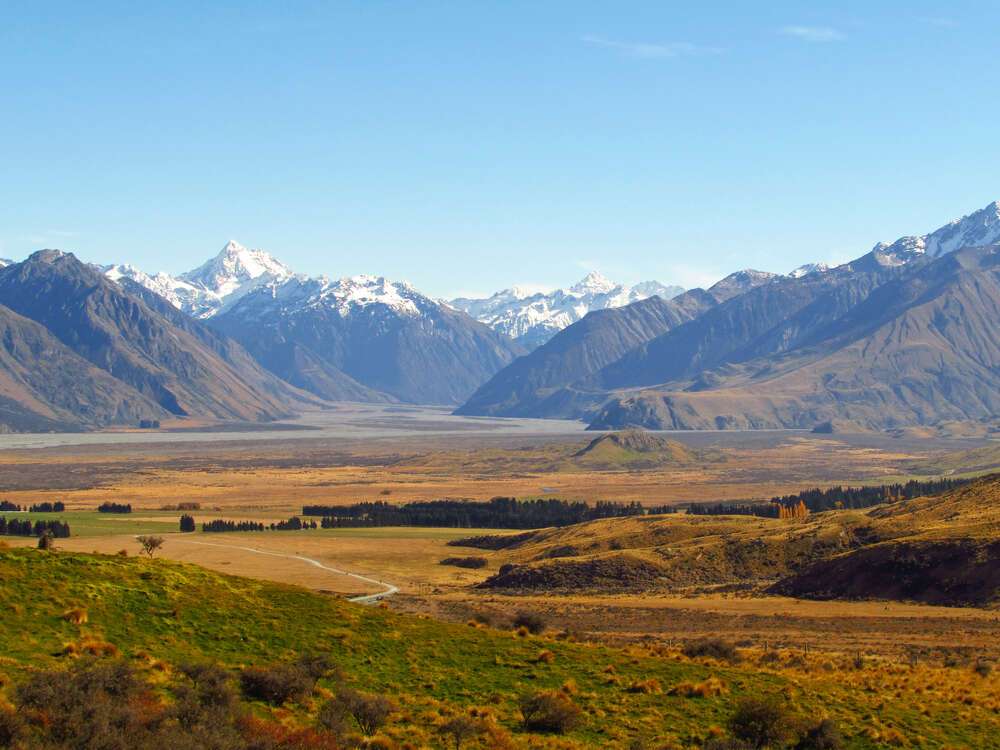 Although the mountain is located on the territory of a national reserve, you can only drive up to it on private land, and then you also need to cross the mountain river (there is a bridge). Independent tourists drive to the Mt Potts Lodge cafe, where they leave their car. And from here, they already go to the shooting locations on foot.

In the north of the South Island, in the Golden Bay area, Dimrill Dale was filmed. The water surface, open spaces and densely forested banks of the Anduin River actually belong to the Waiau River. It is located in Fiordland National Park. You can get to it along the Kepler Track.

WETA Film Studio and Computer Workshop are located in Wellington. It houses props, a lot of costumes, as well as models for creating effects. The visit costs € 28.

The Hobbiton Woods, where they hid under the roots of trees, is on Mount Victoria. The Martinborough Wine Region is just 60 minutes' drive from Wellington. On the way to it, you will see the Hutt River, where the hobbits left their boats.

The shooting also took place in Kaitoke Regional Park, where scenes of the Rivendel Valley were filmed as well as the “elven” part of the film. Forests, valleys and the river of the park + computer graphics brought the landscape as close as possible to the author's description. The camera captured a lake with boulders in Moeraki. Its uniqueness lies in huge spherical boulders, reaching 2 meters in diameter.

Hobbit Hill in the Carpathians

Great news for all Ukrainians and guests: now, there is Hobbit Hill in Ukraine! In the Carpathians, a fabulous village is being built in Verkhovyna, the capital of the Hutsul region. In 2020, the first tourists already entered the territory of the settlement. The first 10 earthen houses were built. The loud official opening is postponed due to the global pandemic. However, the organizers of the project do not despair and continue to turn ideas into reality. 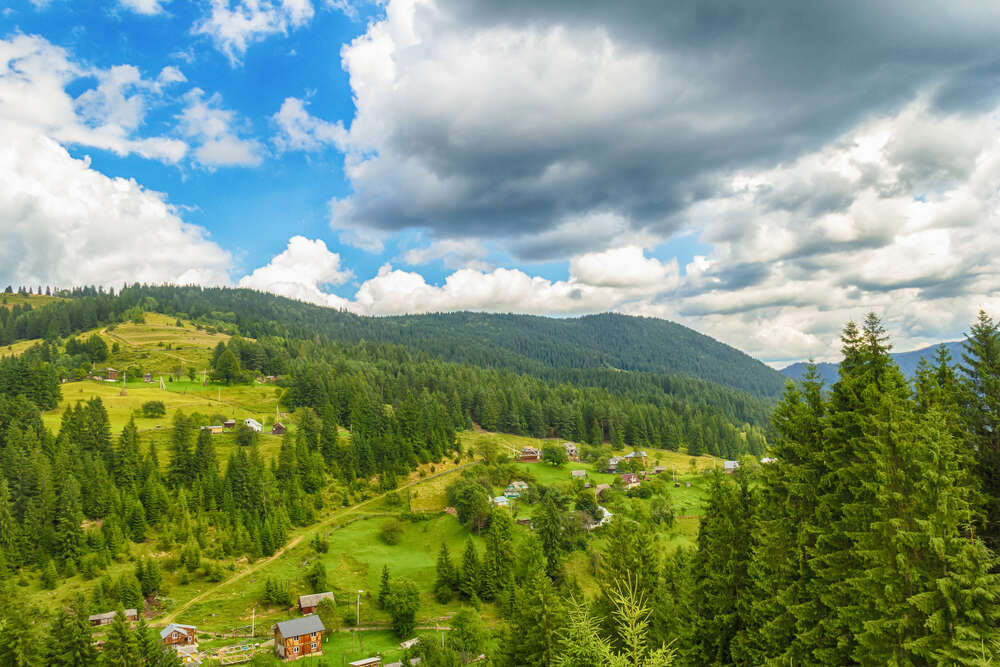 Many tours and excursions are organized around New Zealand's Middle-earth. But experienced Tolkien tourists prefer to create their own route. Travellizy wishes all fans of the Lord of the Rings to plunge into Tolkien's world in reality.