The first American media tycoon's dream estate, which has become a park museum, is a popular attraction in California. Travellizy’s article will tell you about how a millionaire’s idea of a comfortable and cosy house grew into a huge 165-room villa, which he couldn’t pay for. 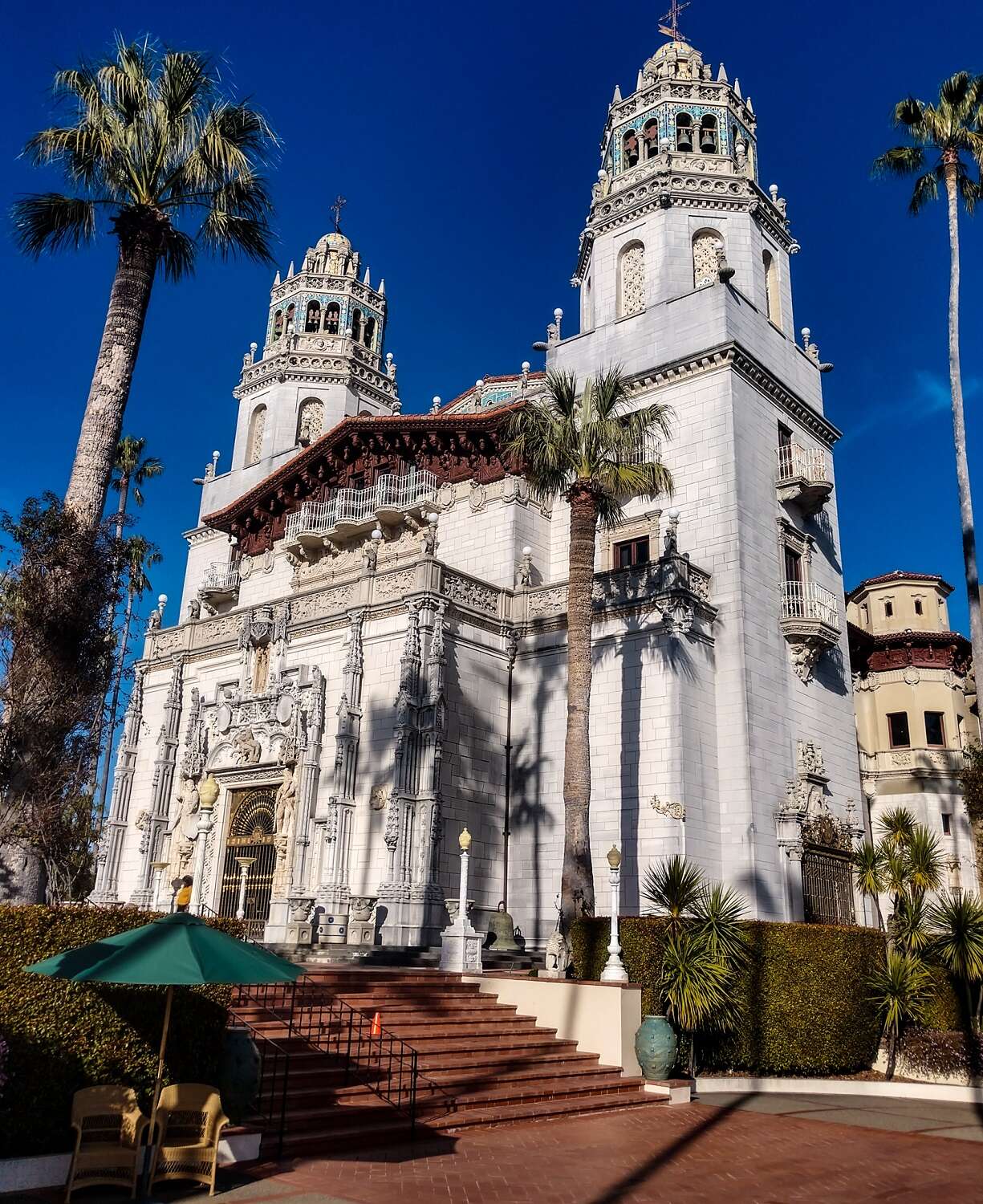 The contradictions associated with it begin with the name itself: Hearst Castle is not a castle at all. The owner himself, William Hearst, called it the Rancho San Simeon, after a nearby town on California's central coast. After the main part of the construction was completed, Hearst gave the estate the official name “La Cuesta Encantada” meaning “enchanted hill” in translation from Spanish. Indeed, the imposing building, which stands alone on the green hills, looks like something unrealistic, fabulous. It seems miraculous that green palm trees rise right around the house, unlike the surrounding slopes. But the explanation is very trivial: during the construction, the trees were carefully replanted closer to the buildings. Subsequently, 70,000 seedlings were additionally brought and planted here. 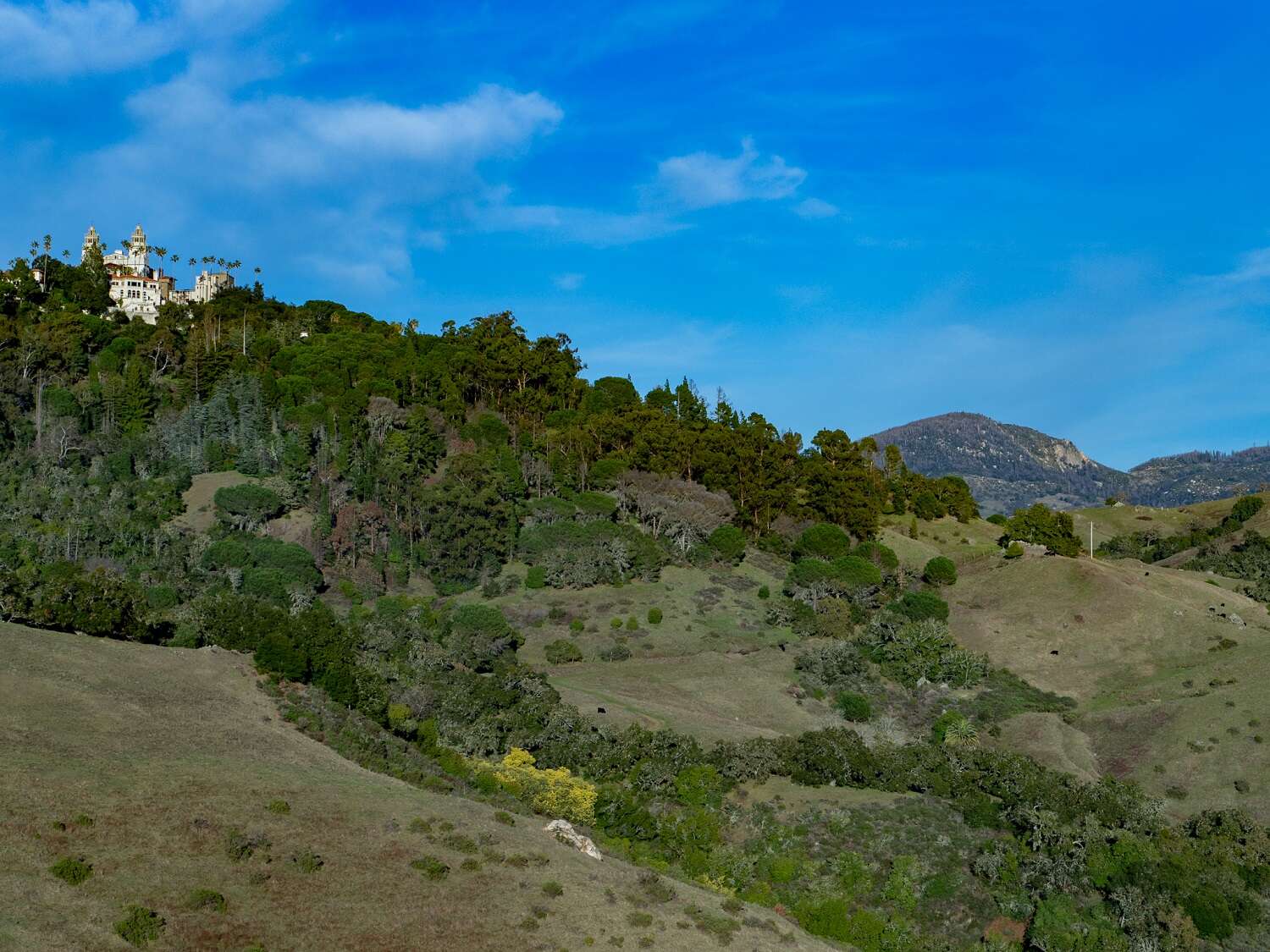 Hearst Castle is a complex of buildings erected from 1919 to 1947. But first things first: a little information about the Hearst family will help to understand the significance of this extraordinary historical monument better.

The Way to Enchanted Hill: The Rise and Fall of the Newspaper Empire

William Hearst never knew poverty or moderation: his father George Hearst, a multi-millionaire, did everything possible so that his son’s life path would not be overshadowed by financial problems. Hearst Sr. made a fortune as the largest US gold miner, gained political weight by taking the post of senator from California.

Hearst Jr. saw his career only in the publishing business. Starting his career as a journalist in 1885 with the famous Joseph Pulitzer, he controlled over 30 publications and a dozen radio stations throughout the country by 1925. Hearst set up an uninterrupted stream of catchy headers; circulations grew, as did profit. Gossip, scandals, made-up crimes and even fake wars, fictitious dirty and bloody details - this was the hallmark of the newspapers owned by Hearst. 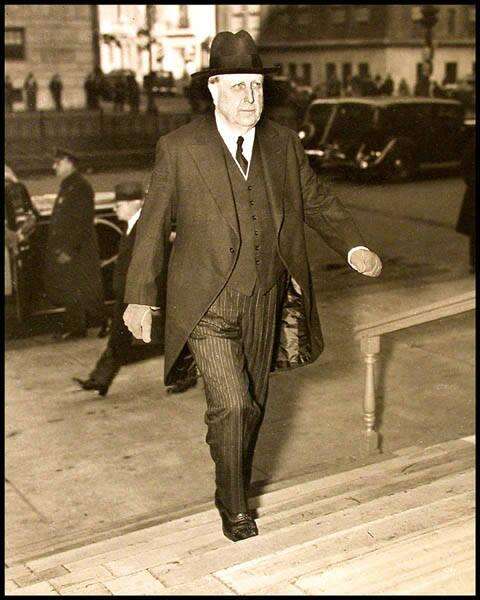 His father, who was tired of the constant squabbles and problems caused by the turbulent activities of his son, disinherited him. But since the mother was always on the side of the only child, after the death of his father, Hearst Jr. still got the money at his disposal. After his mother's death, Hearst became even wealthier. He dreamed of becoming president of the United States and correctly evaluated media channels as an instrument, although he lost the election twice.

Citizen Kane as Satire and Drama

Hearst interpreted freedom of speech and journalistic ethics purely in his own interests, and his eventful, but inglorious life became the prototype for the film Citizen Kane directed by Orson Welles. After the release of the film in 1941, Hearst avenged its creators in every possible way and prevented the release. But life has put everything in its place: Citizen Kane is still studied at film institutes as an academic example of high-quality cinema, and the newspaper empire of Hearst is used as a good example of the tabloids.

A scene from the movie: 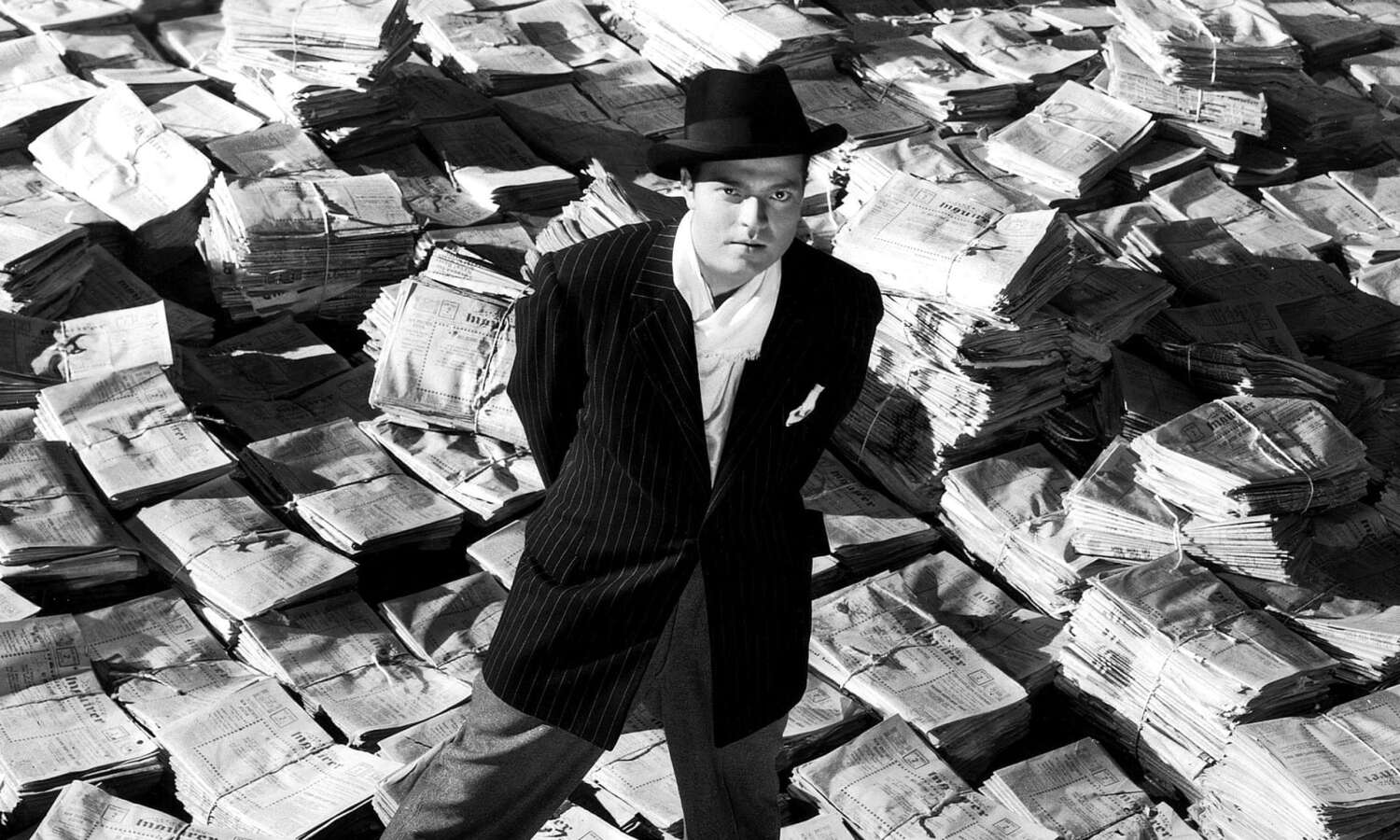 Despite the complete lack of charisma, a bad reputation and numerous scandals, Hearst was able to strengthen his position in society. He sympathized with fascist Germany, seeing them as strong American allies against the USSR. He made money by publishing articles and notes paid by the Nazis in his publications until the United States officially entered World War II. In 1934, he met Hitler, later trying to clear his interest with a desire to talk with the Führer about the fate of the Jewish community.

Another mystery, which still has not found an answer, is the death of one of the guests of Hearst during a boat trip. Allegedly, Hearst shot his guest Charlie Chaplin out of jealousy, but he missed and hit the movie producer Thomas Ince. Despite the sharp reaction of the public, the situation and money did their job and story was suppressed.

The mistress of the house on the hill, as well as Hearst's companion until his death, was not Hearst's official wife, but his lover. Marion Davies, a popular Hollywood actress, became a silent movie star with the help of her wealthy patron. They met when he was 54, she was 20. 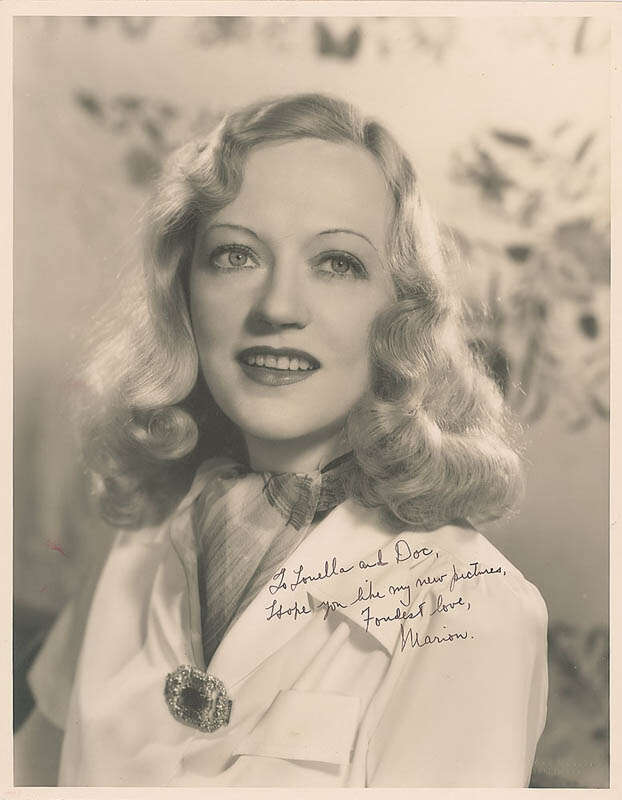 Did millions of other people make her happy? No, they didn't. But they brought her wealth: constant pressure, reproaches and an unsuccessful career in sound films crippled Marion, she drank herself into oblivion and used drugs. Despite this, she made more reasonable financial decisions than Hearst. His media empire barely survived the thirties, he had to sell factories and mines inherited from his father, as well as part of the collection. In 1947, Hearst left the estate forever. Marion stayed with Hearst until the last, but the official family did not even allow her to attend the funeral. The beginning of the short era of Hearst’s reign on the Enchanted Hill was glorious. But in the end, a significant part of the estate remained unfinished; the final decision to stop the construction was made not by the owner and not by the architect, but by life itself. 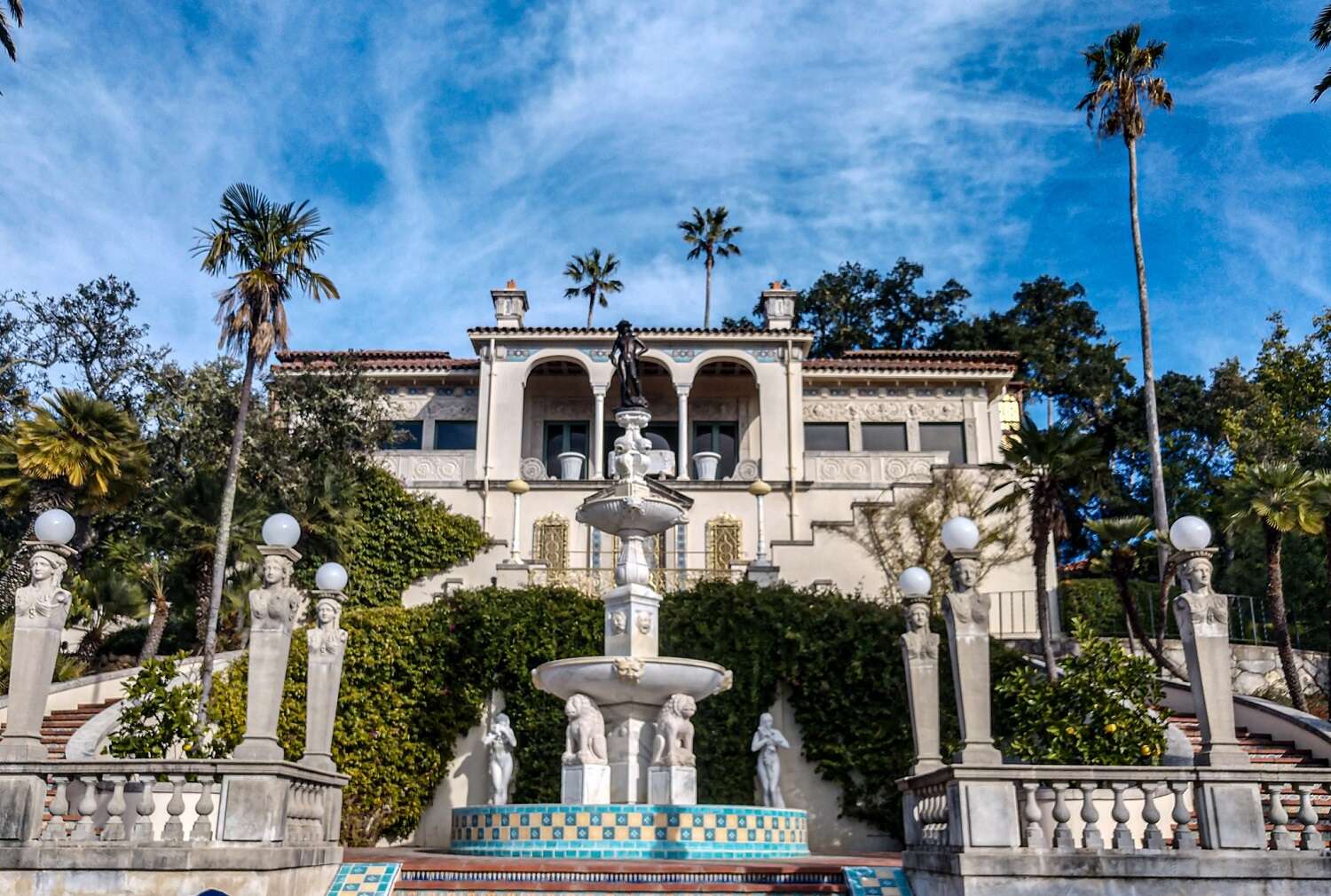 The construction of the Enchanted Hill and its result

Owning several luxurious houses and apartments in different cities of the USA, he considered his Ranch in San Simeon a special place. He entrusted the design and construction of the grandiose project to Julia Morgan from San Francisco. She was a fashionable architect, the first woman to receive a California Architect certificate. She and Hearst had been creating the house of his dreams for nearly 30 years. 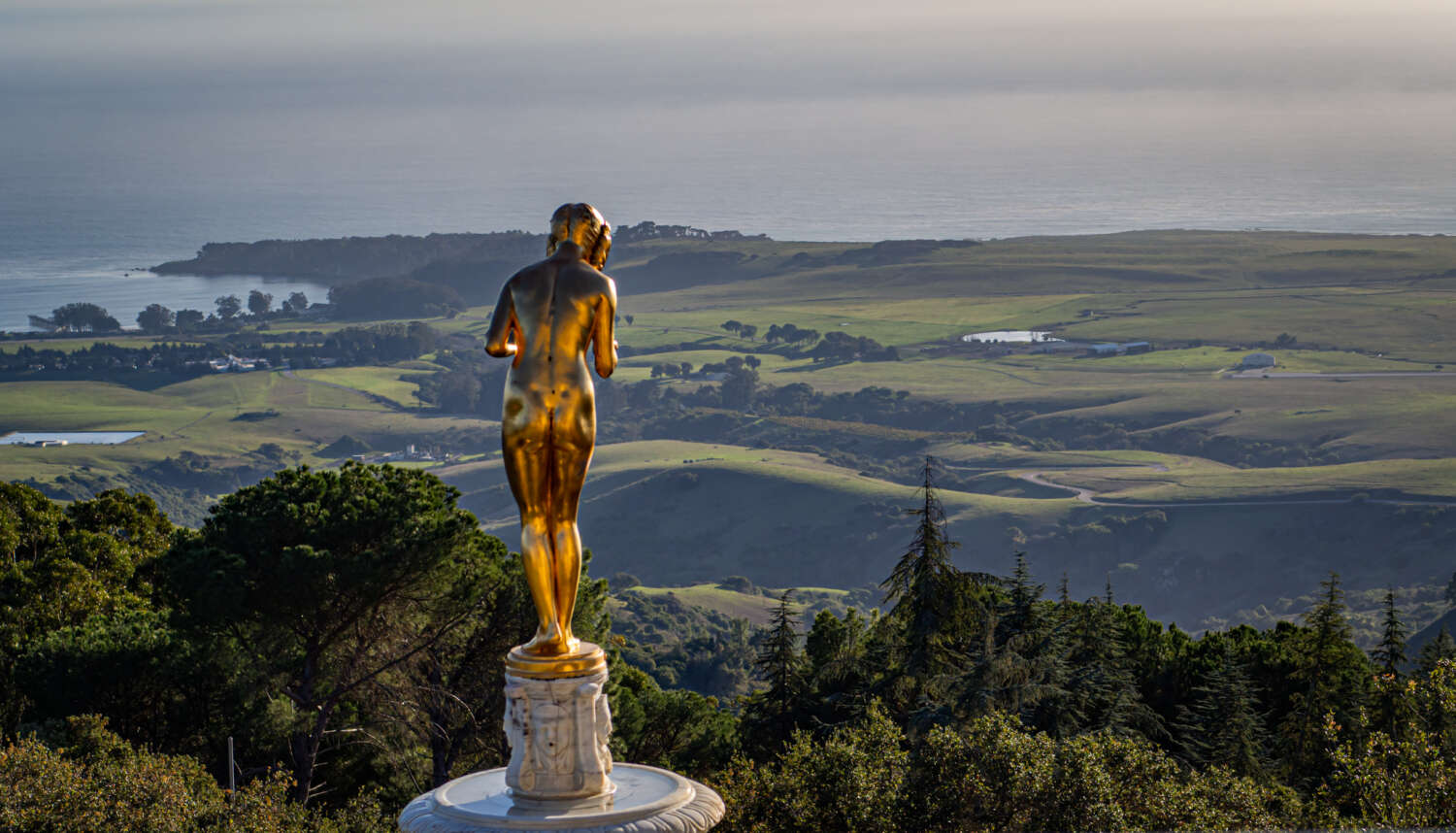 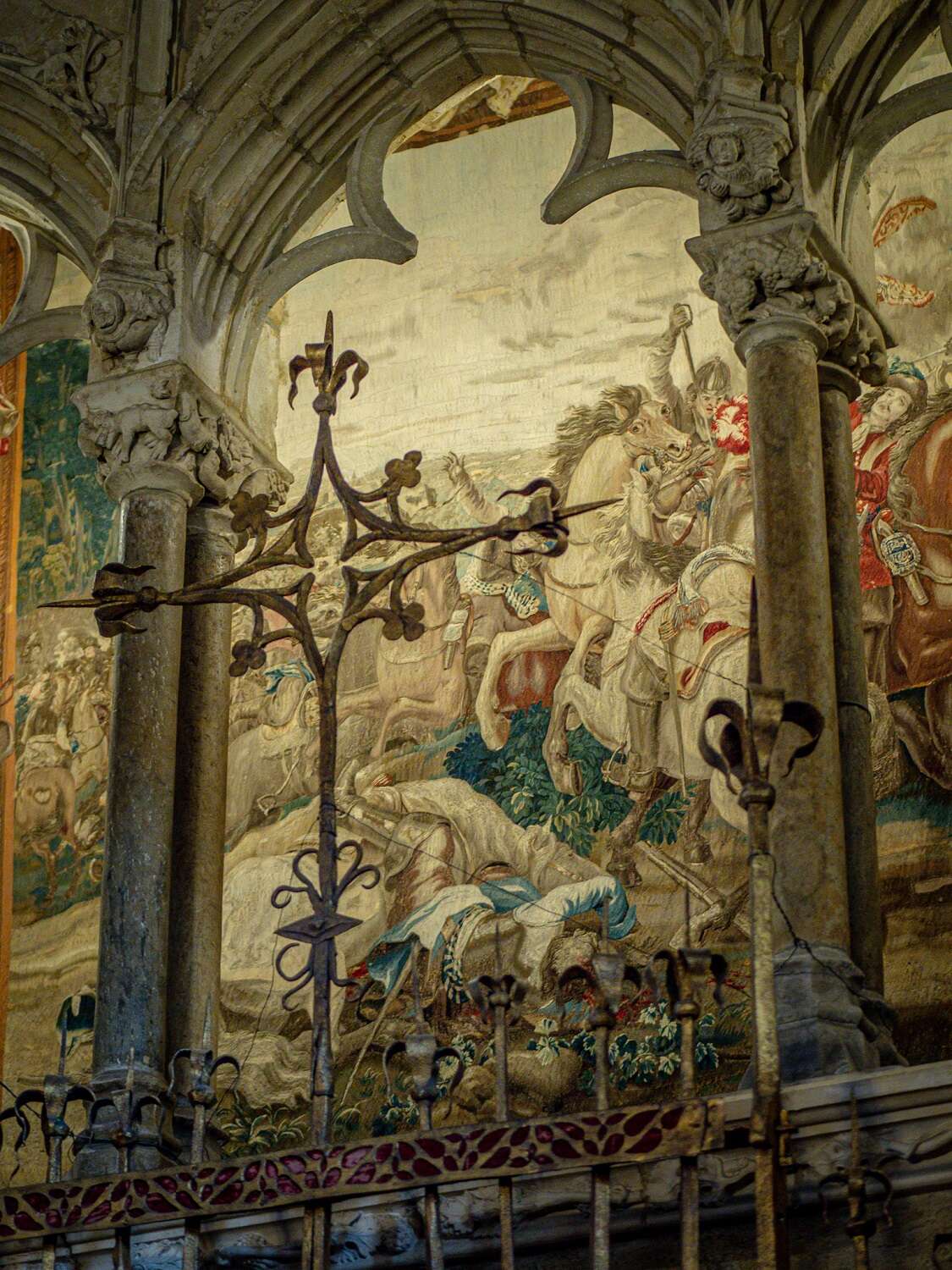 The main house, towering on a hill, was made in the style of the Spanish Catholic Cathedral. But do not let the appearance fool you: it is a residential building, not a church. However, 18 bells were installed on two belfries. 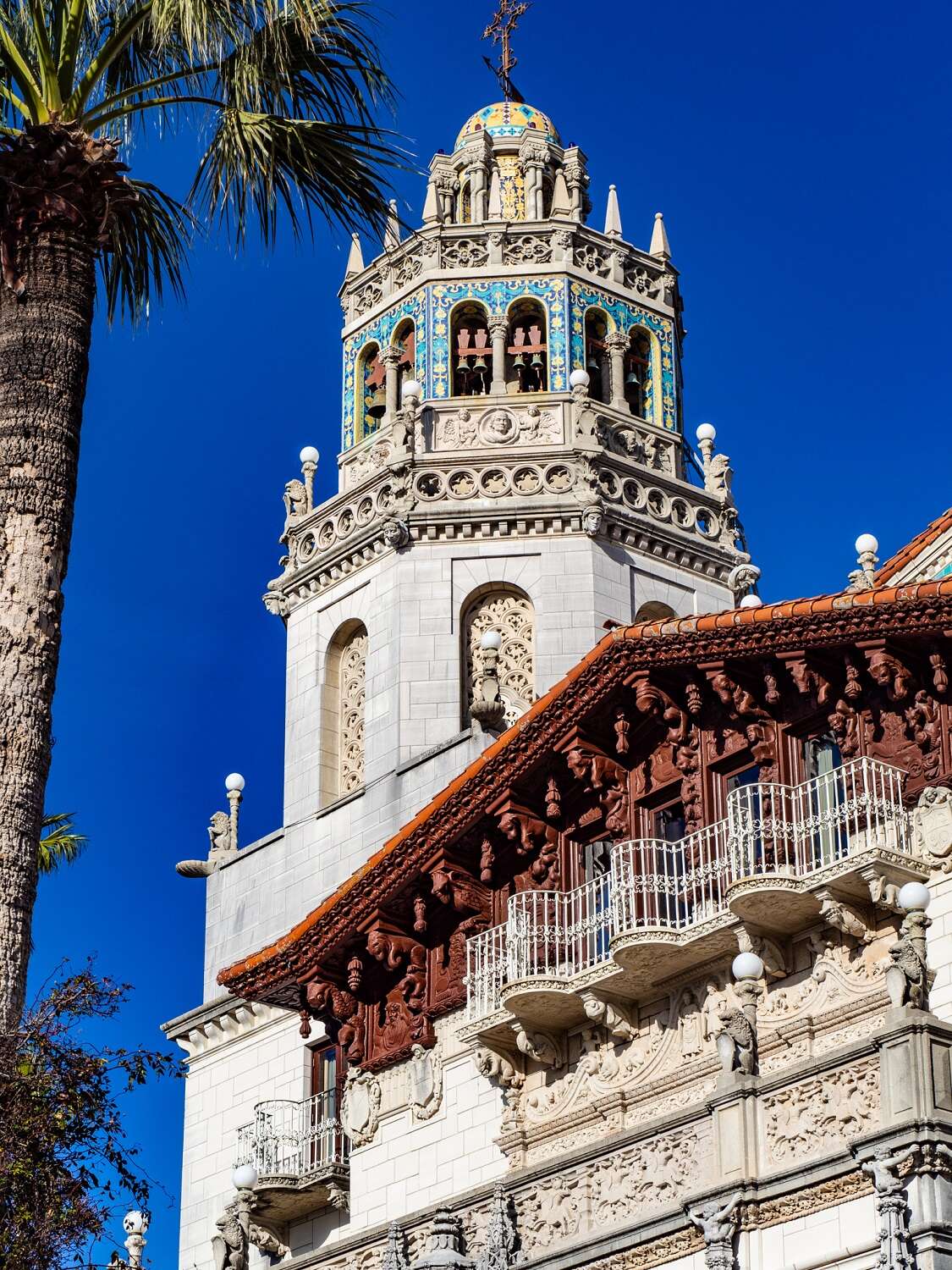 Part of the bricks, stones and decorative elements used in the construction had been transported across the ocean from European countries for years. 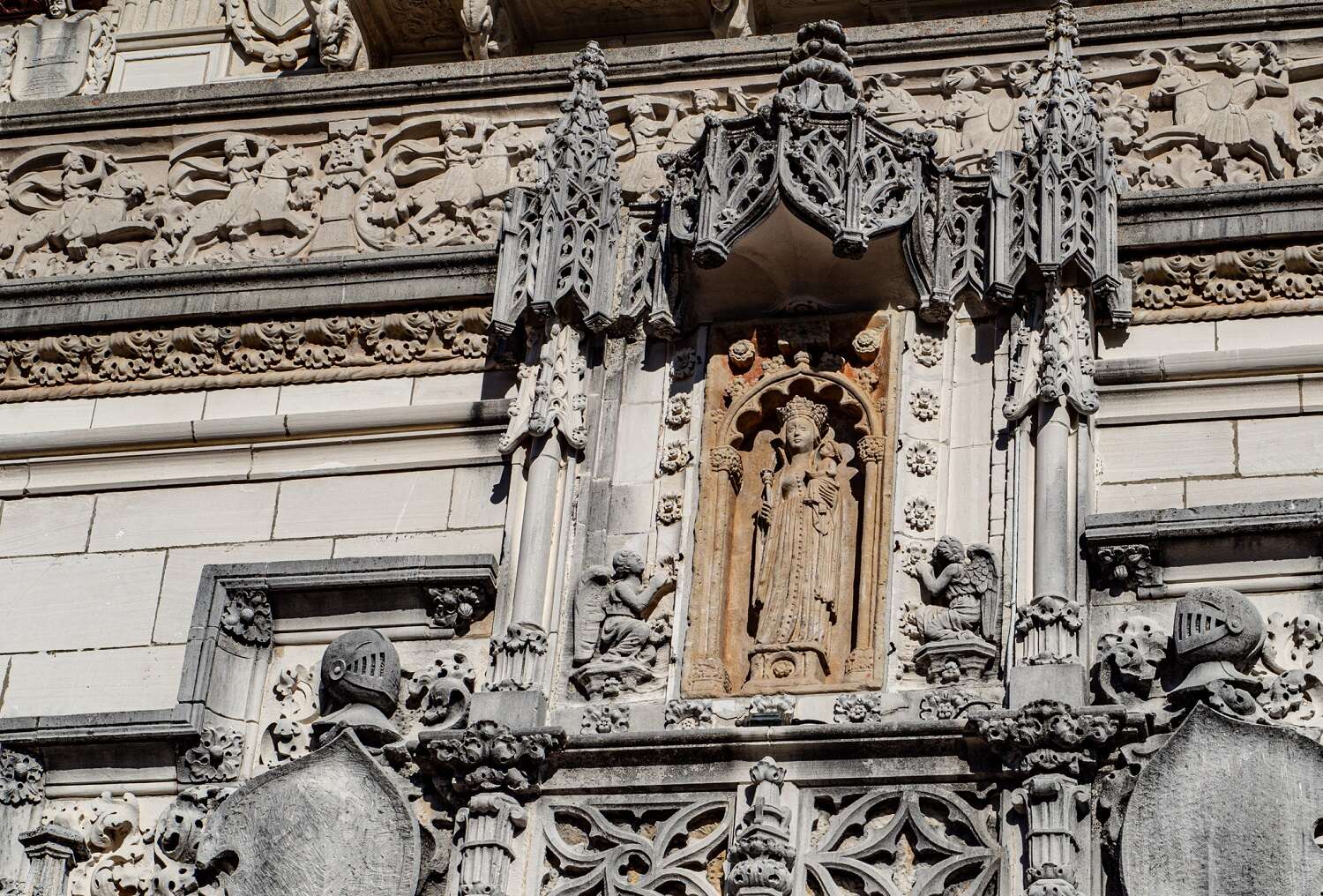 What looks like Spanish Baroque on the outside resembles British castles on the inside. No wonder Hollywood designers came here for inspiration during the filming of Harry Potter. 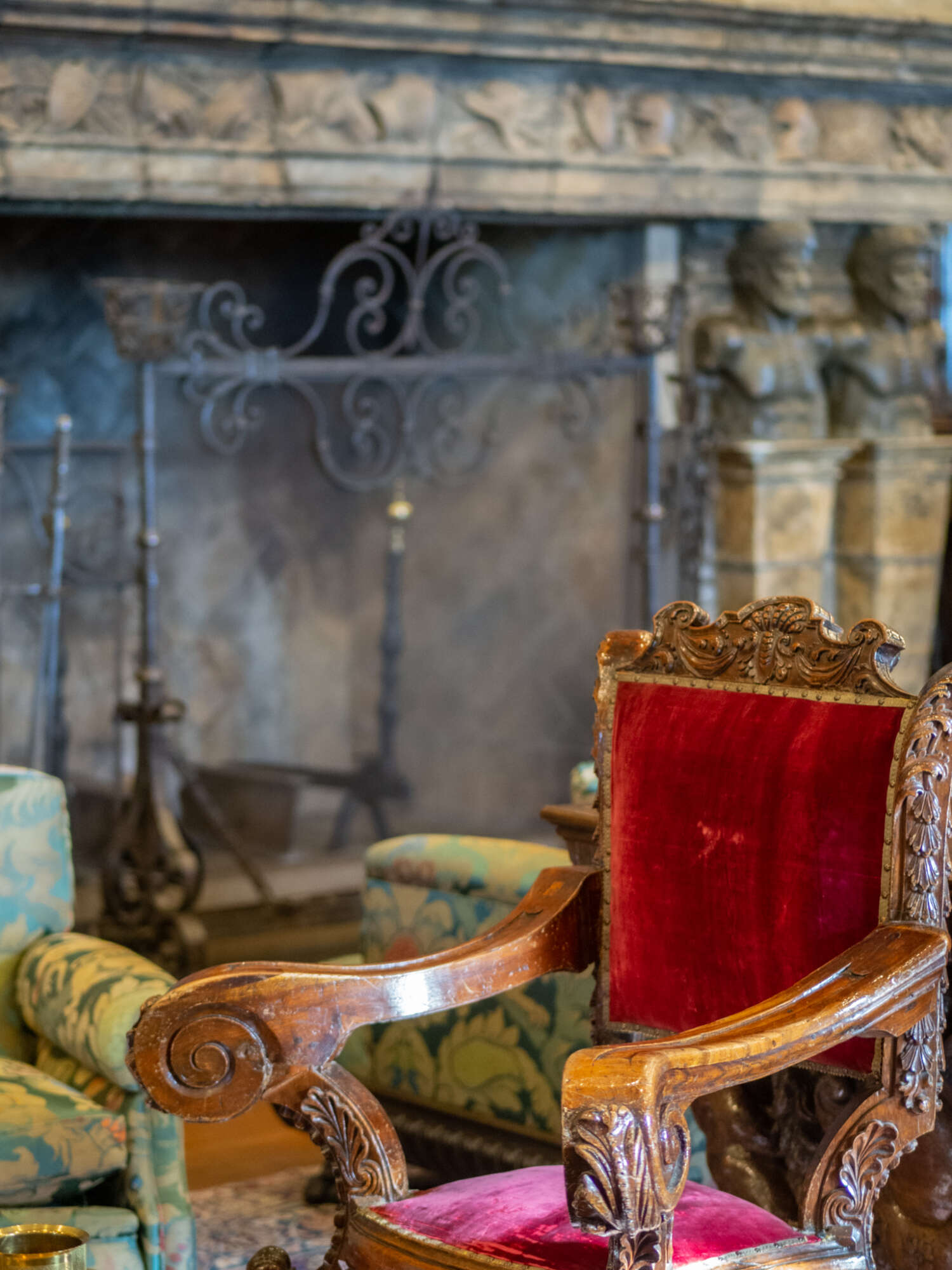 In another room, Gothic arches are adjacent to a pool table, Byzantine pottery and a stuffed owl. 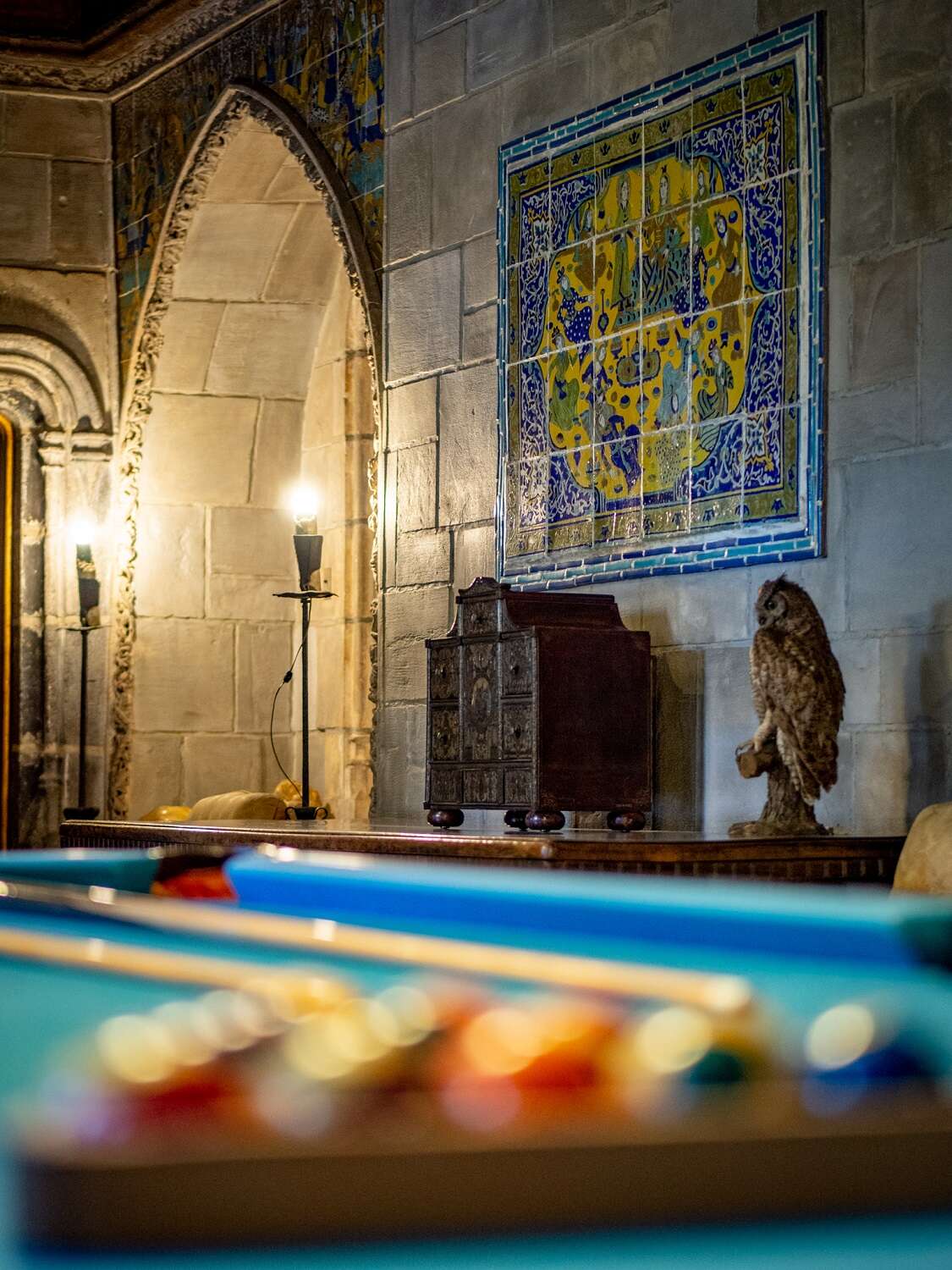 The same mixed feeling is caused by the old dining table in the ballroom, where the most famous people of that time dined: Winston Churchill, Bernard Shaw, Charlie Chaplin, Greta Garbo, Clark Gable. 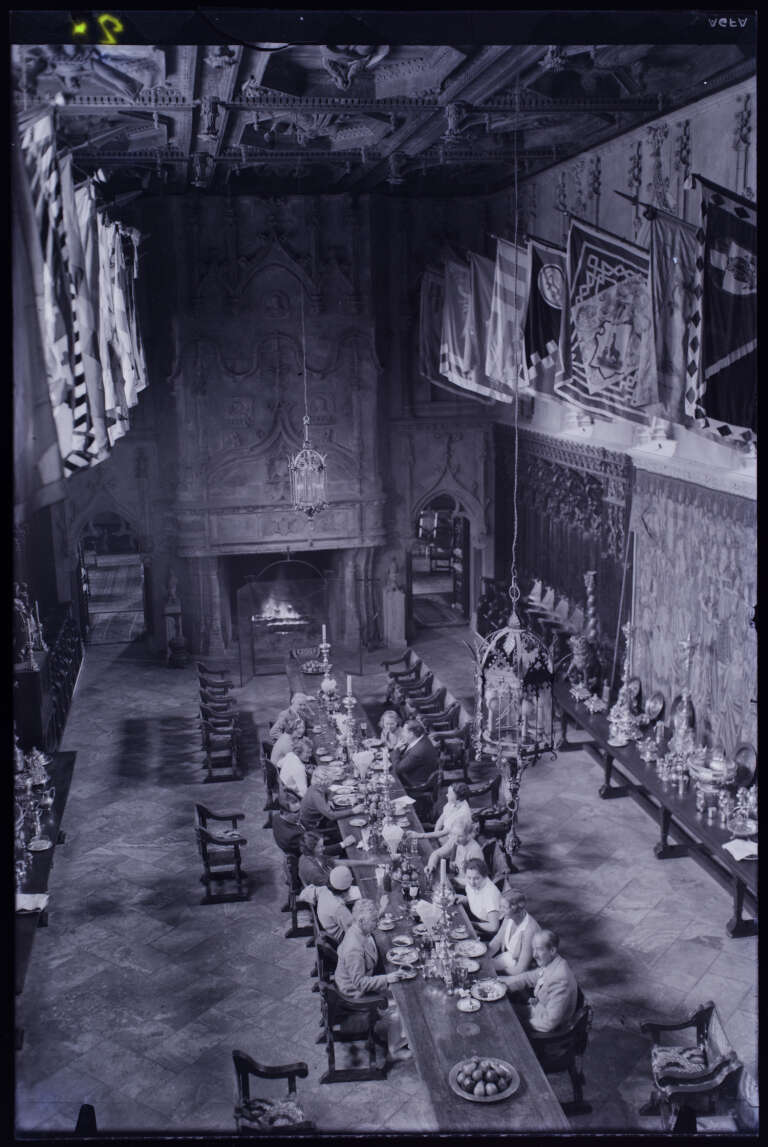 Hearst wanted to impress his guests with luxury and richness: the world's best chefs used to prepare delicious food, but American ketchup and mustard were always on the table. 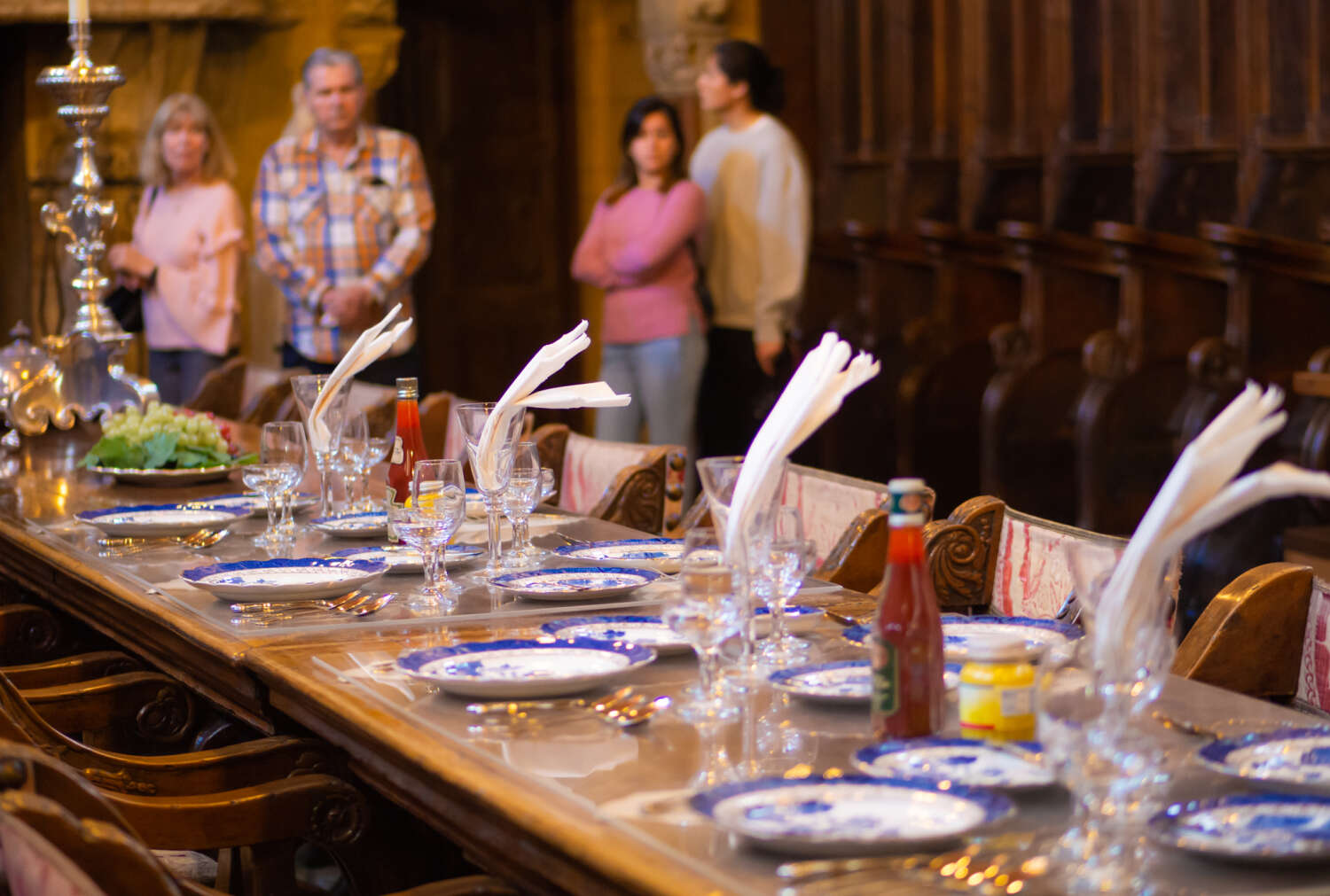 During the tour, you can personally assess the level of cosiness and comfort in the living rooms. 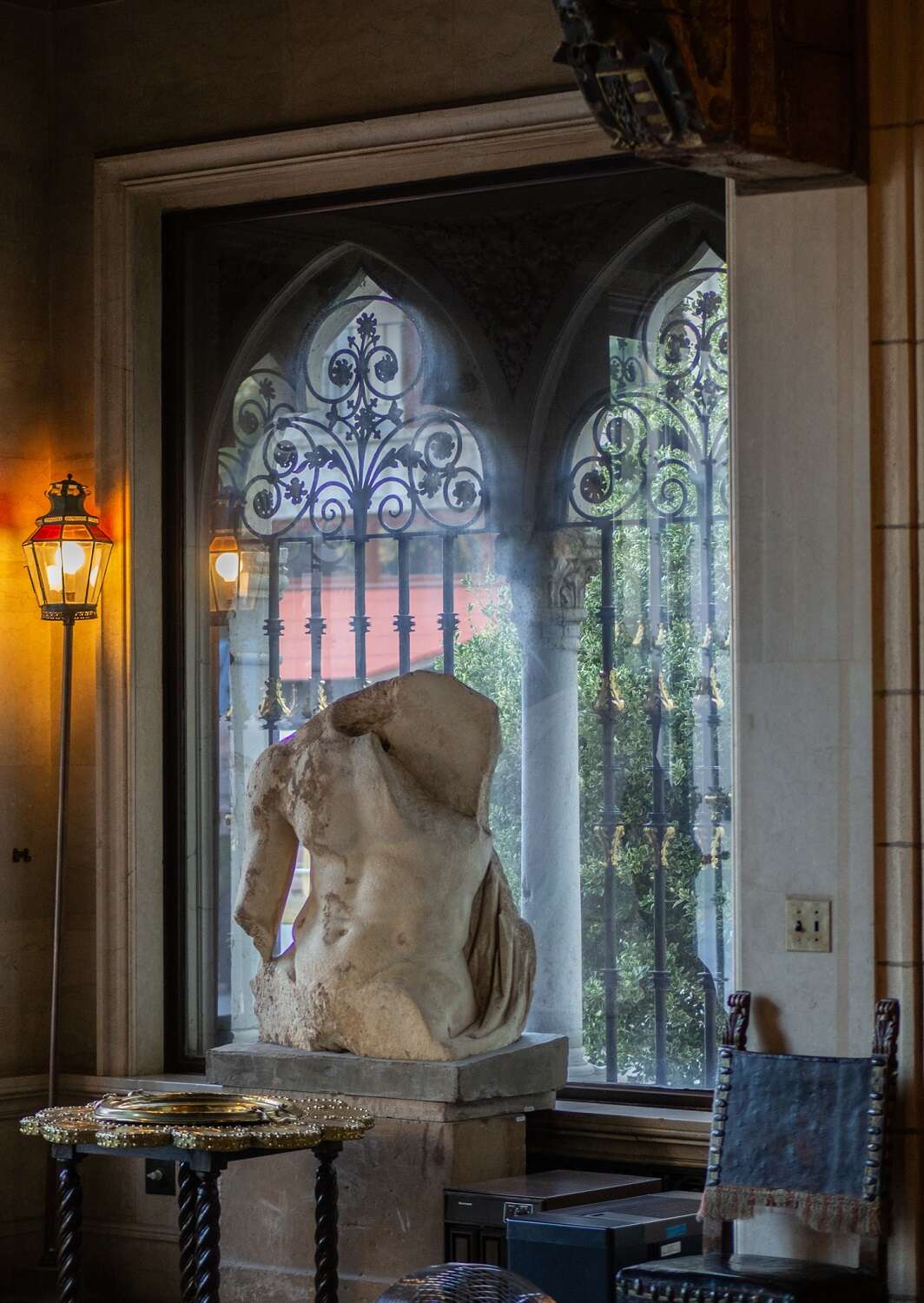 The estate has two swimming pools. The external pool, named after the ancient Roman god Neptune, decorated with Italian statues, had been built for 15 years. Such a long construction was due to the fact that it was rebuilt three times, each time increasing the area. 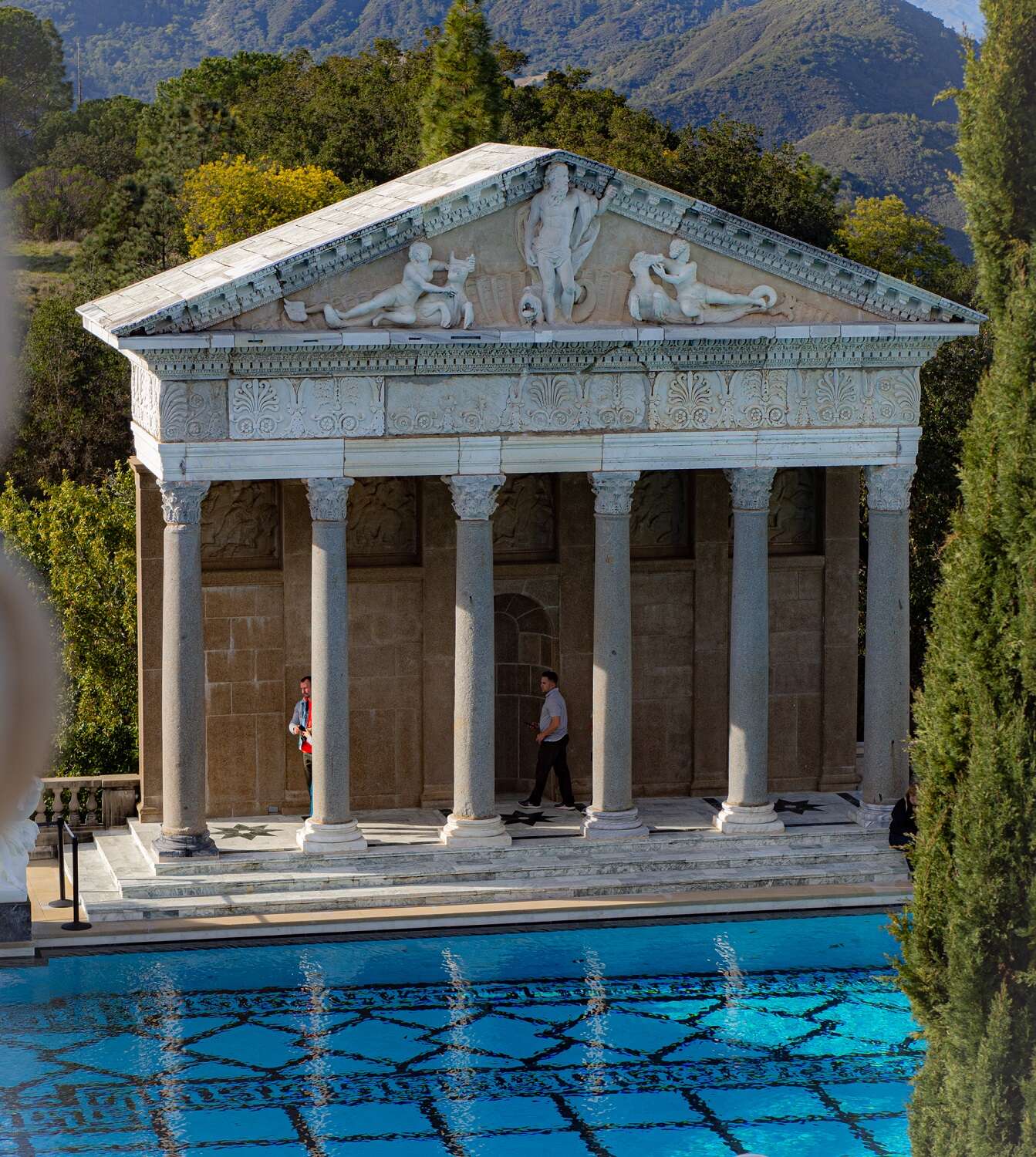 The second pool (Roman) is indoor, more than a million mosaic tiles made in Venice were used as its decorative elements. Some of the tiles are covered with real gold. It was such a swimming pool that the rich Hearst considered appropriate for himself and his famous guests. 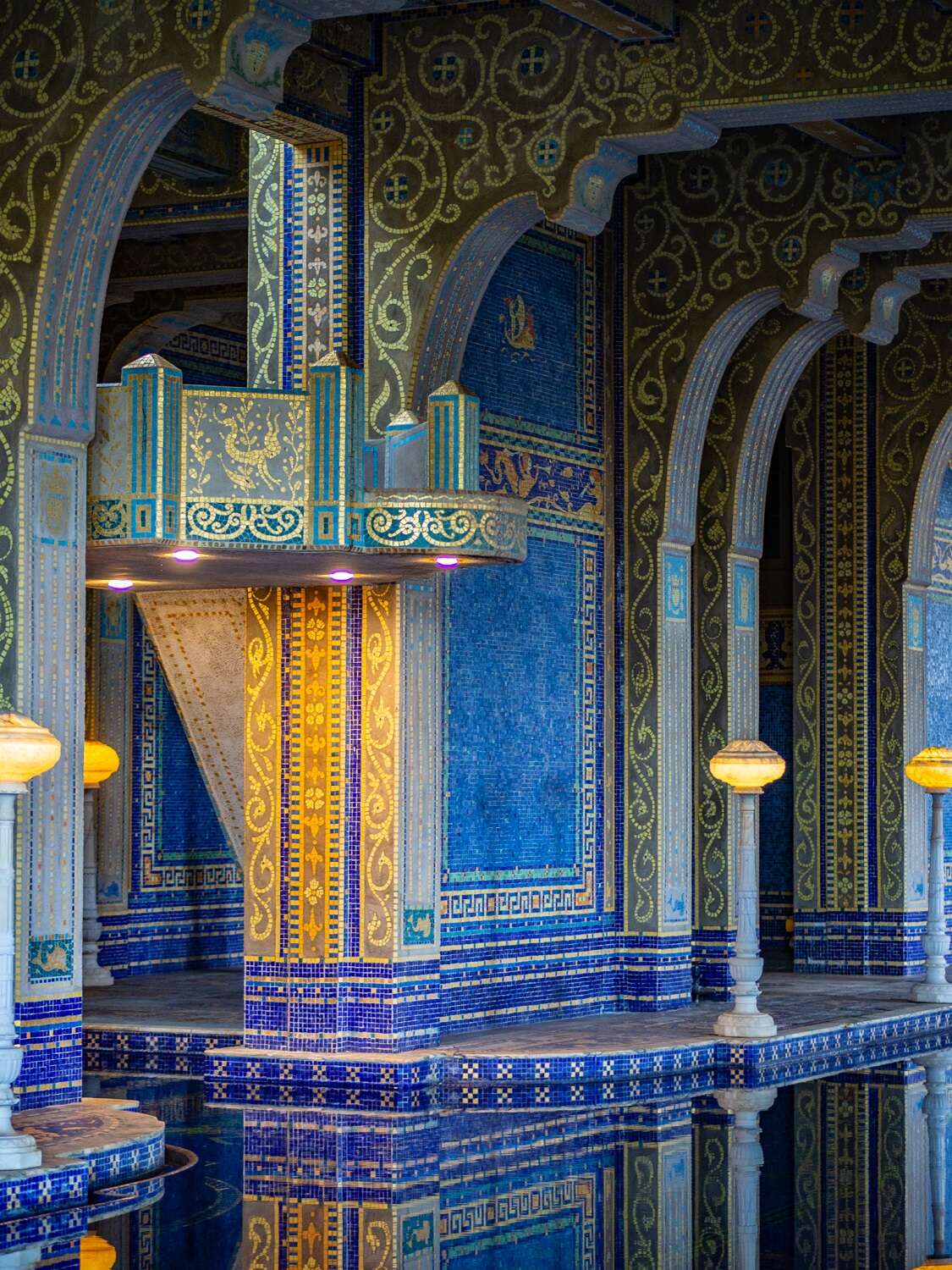 And even nowadays, stars visit Hearst Castle! Lady Gaga, the pop princess, rented a Neptune pool for filming the video for the song “G.U.Y.”, you can watch it at the link  Renting a location cost the singer $ 23 thousand, but she showed nobility and additionally donated another 250 thousand for the needs of the museum.

Can an ordinary person plunge into the legendary pools? Theoretically, yes, but it will cost you a tidy sum: $ 500 for an annual membership fee and another 950 for the opportunity to swim on a special day. The number of tickets is small: only 60, so if you want to splash around in one of the most expensive pools in California, you hurry up. 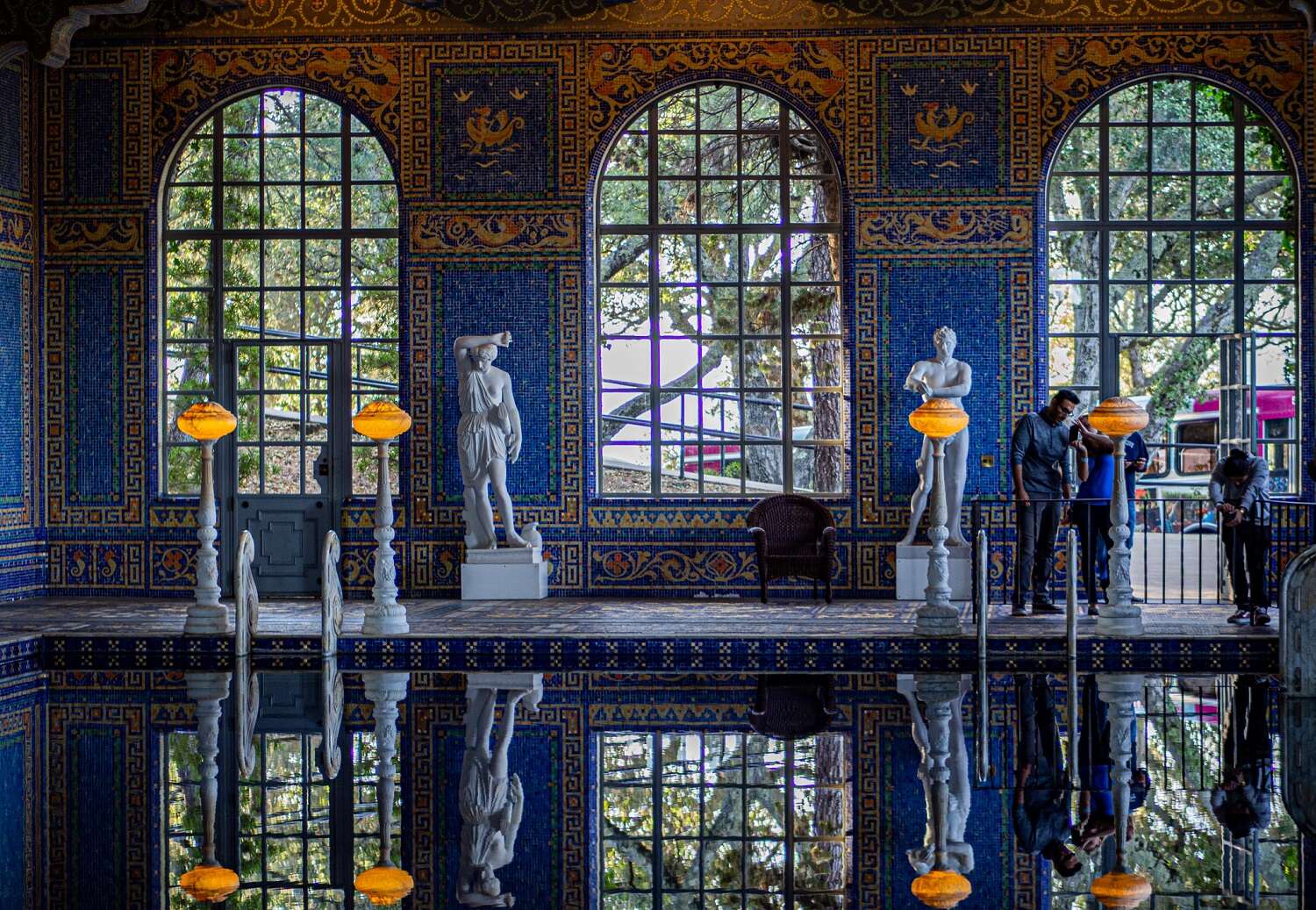 The Enchanted Hill with one and a half hundred rooms did not become a home for the five sons of Hearst and his wife. Tight control, pettiness and tyranny - these are the levers that Hearst used both in the family and in business. The unfinished northern terrace, like a number of other objects, remained incomplete. 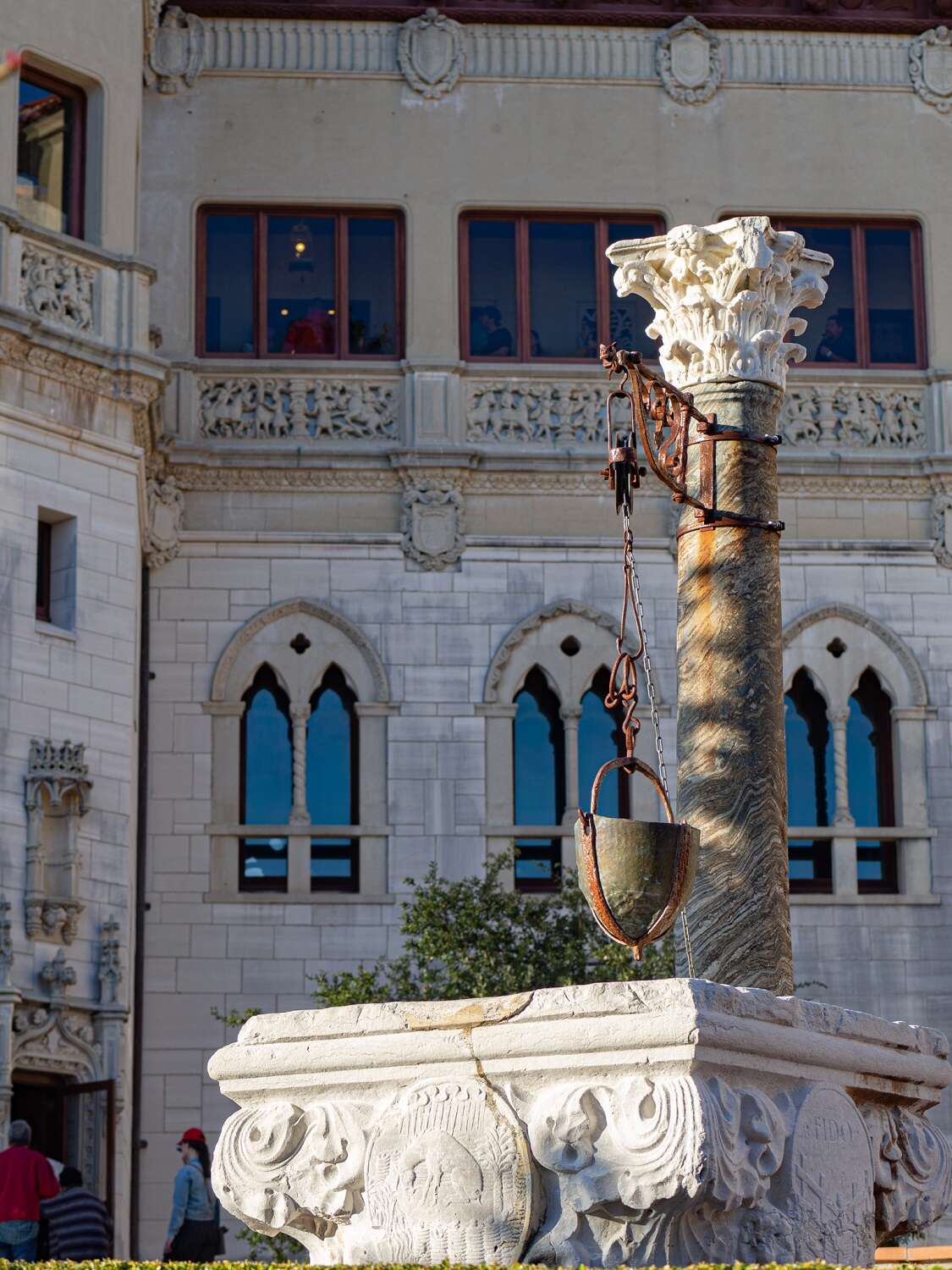 Will California ever implement a plan devised by Hearst a hundred years ago? It probably won't. Numerous descendants of Hearst own dozens of well-known publications including Cosmopolitan, ELLE and Men's Health. They are still in litigation with the museum over the lands around the estate. 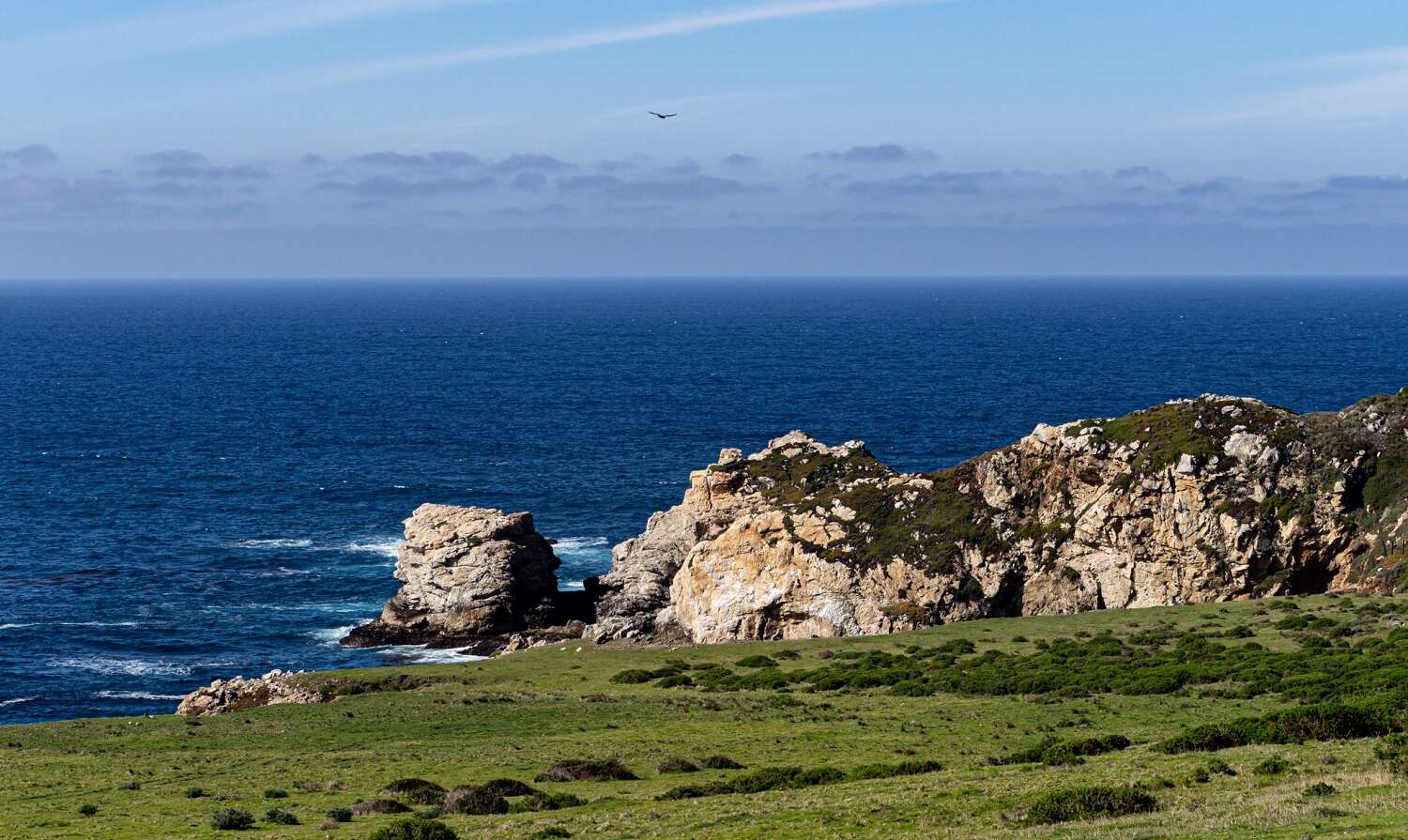 But these are not gloomy details that attract visitors. Tens of thousands of tourists come here to admire the beautiful buildings and well-groomed flower beds, to have a look at ancient art objects. 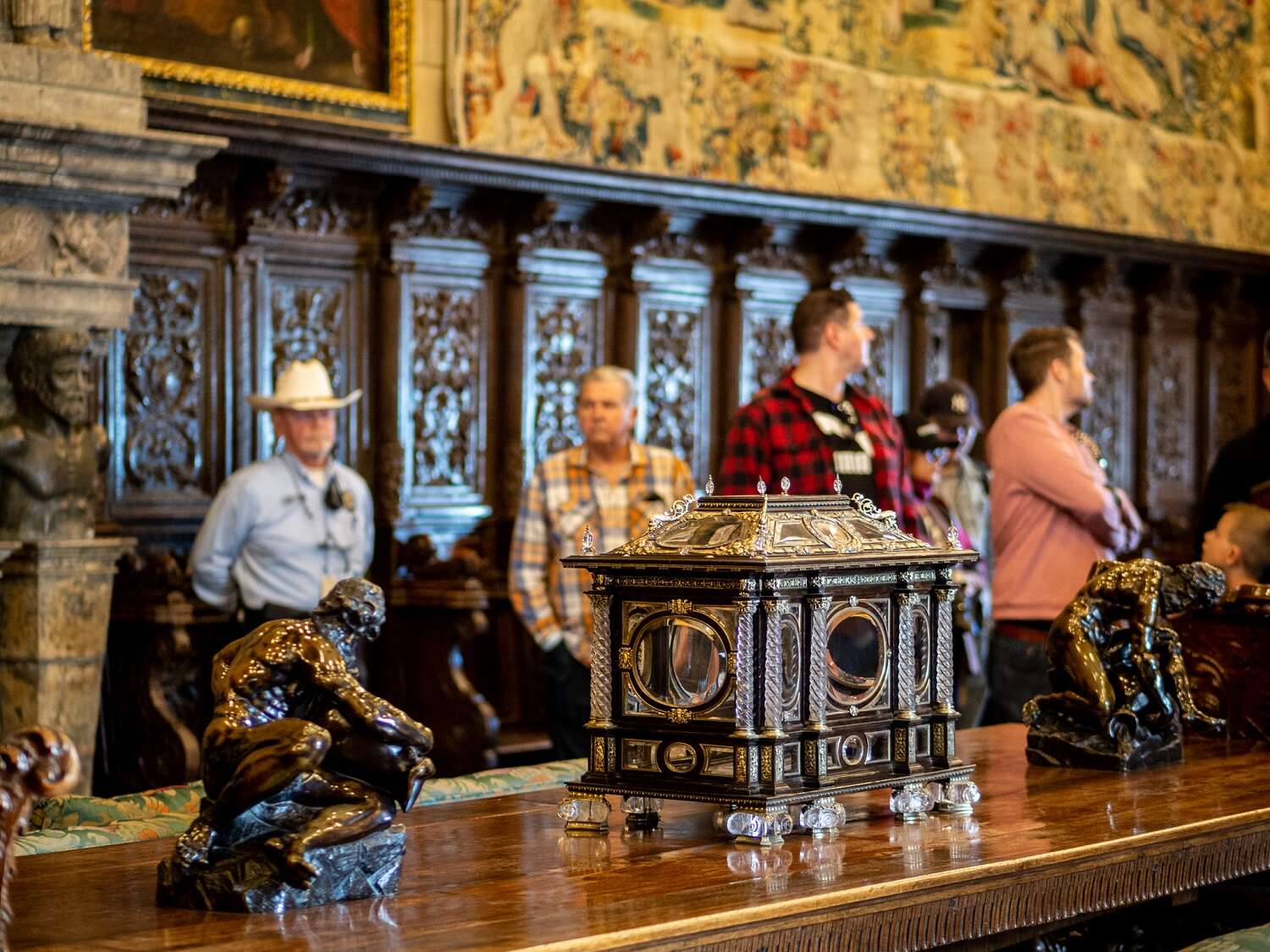 After the death of Hearst, his family donated the estate to the state, since the cost of maintaining and preserving the objects of art is very expensive. Nowadays, the museum remains viable only through subsidies, personal and corporate contributions, and free volunteer labor. Utility bills for the 165-room Hearst complex cost annually $ 250 thousand. Depending on the amount of work, operating costs for the park museum reach up to $ 8 million per year. A four-year repair of the Neptune Fountain cost almost $ 5.5 million, and before that, due to leaks, 22 thousand liters of water went into the soil daily. Nevertheless, everything possible is being done to preserve the objects of art stored in the castle and the buildings themselves. 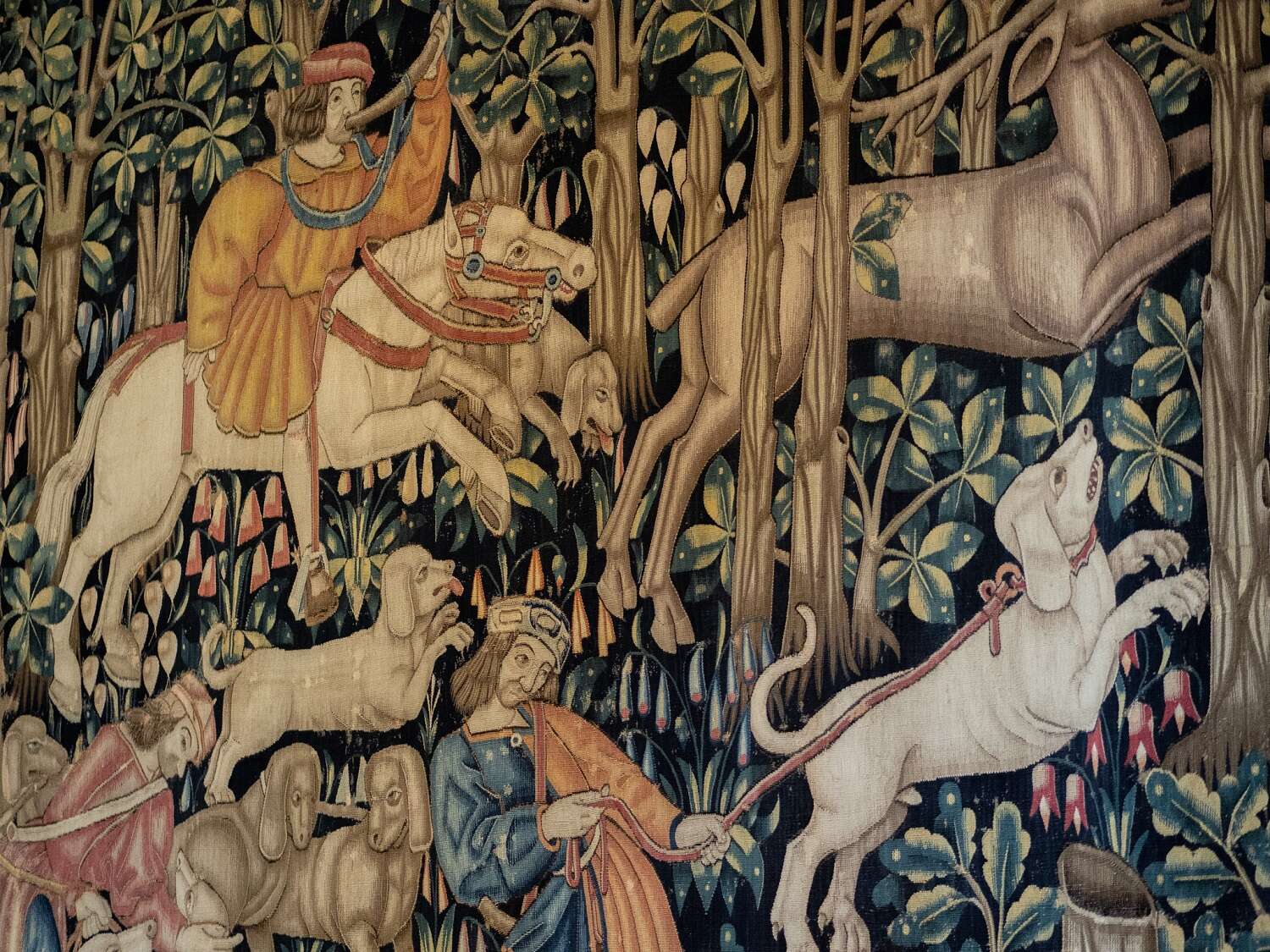 If you are going to Hearst Castle, plan to spend here at least four hours. Access to the castle by private transport is prohibited, and you may not pass by the tourist center. 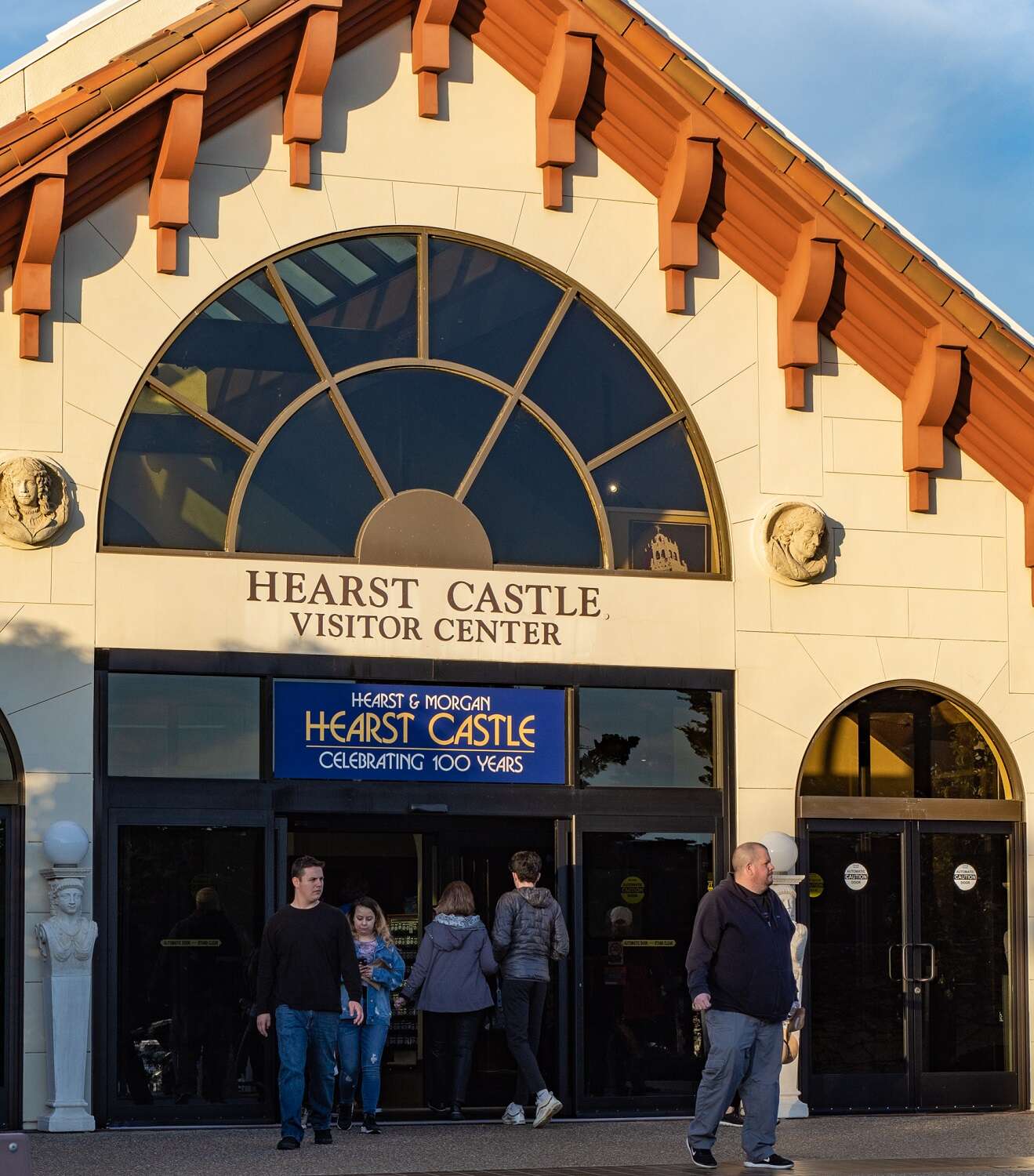 Everyone who wants to see the museum must choose one of the tours, wait for their turn on the shuttle bus, and only then, under the vigilant supervision of the guides, the tour begins.

Before the educational lecture begins, the guide speaks out the conditions of the tour: do not touch objects, do not smoke, sit down only on modern furniture, do not leave the group, drink water only from bottles, do not chew gums. It is also forbidden to pick oranges and tangerines from the trees growing here. 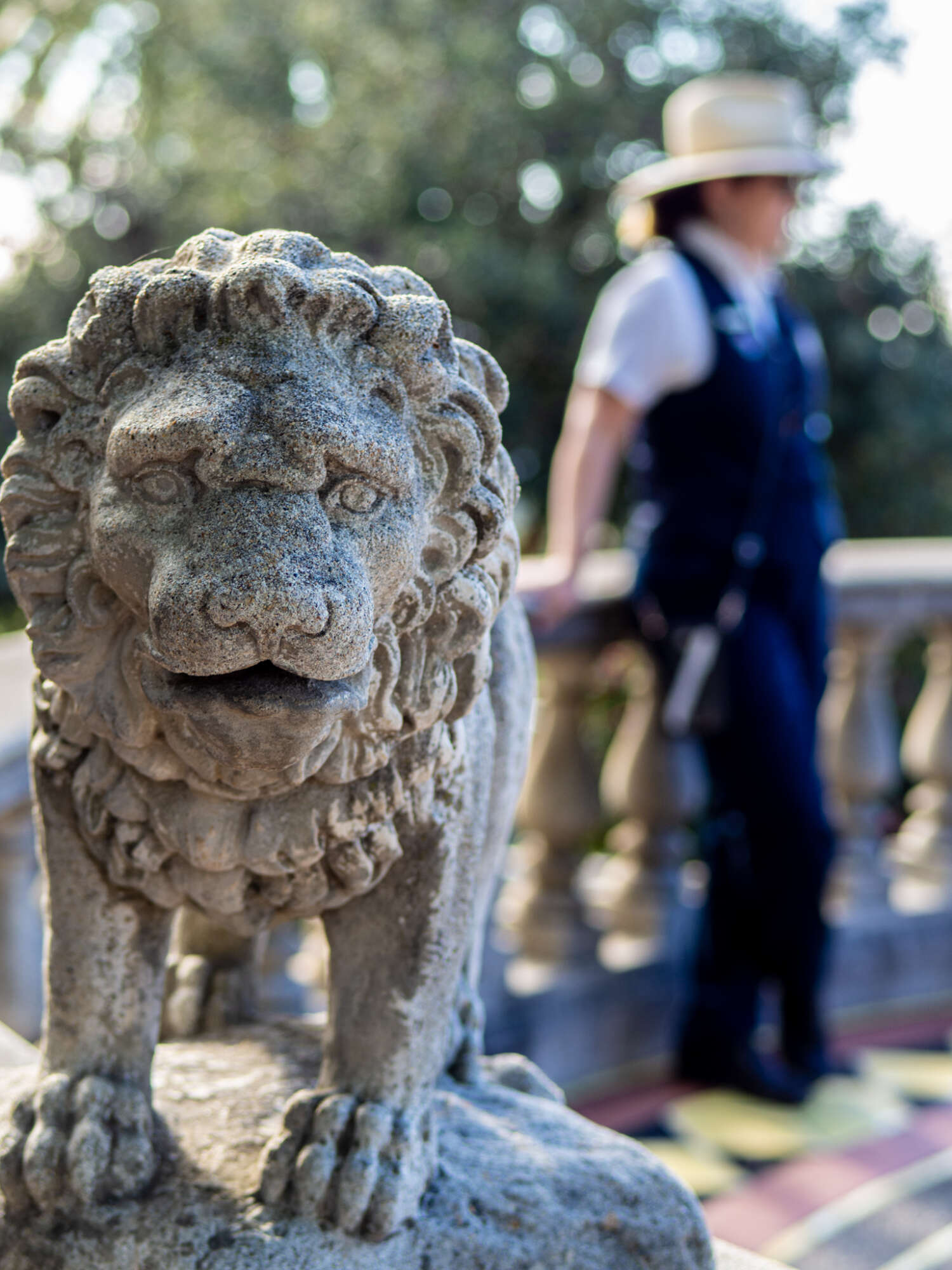 Despite strict rules, Hearst Castle is very popular. Visiting it will surely give you a lot of pleasant experiences. Some tours offer the opportunity to visit a home theater to watch an educational film about the construction of the estate. 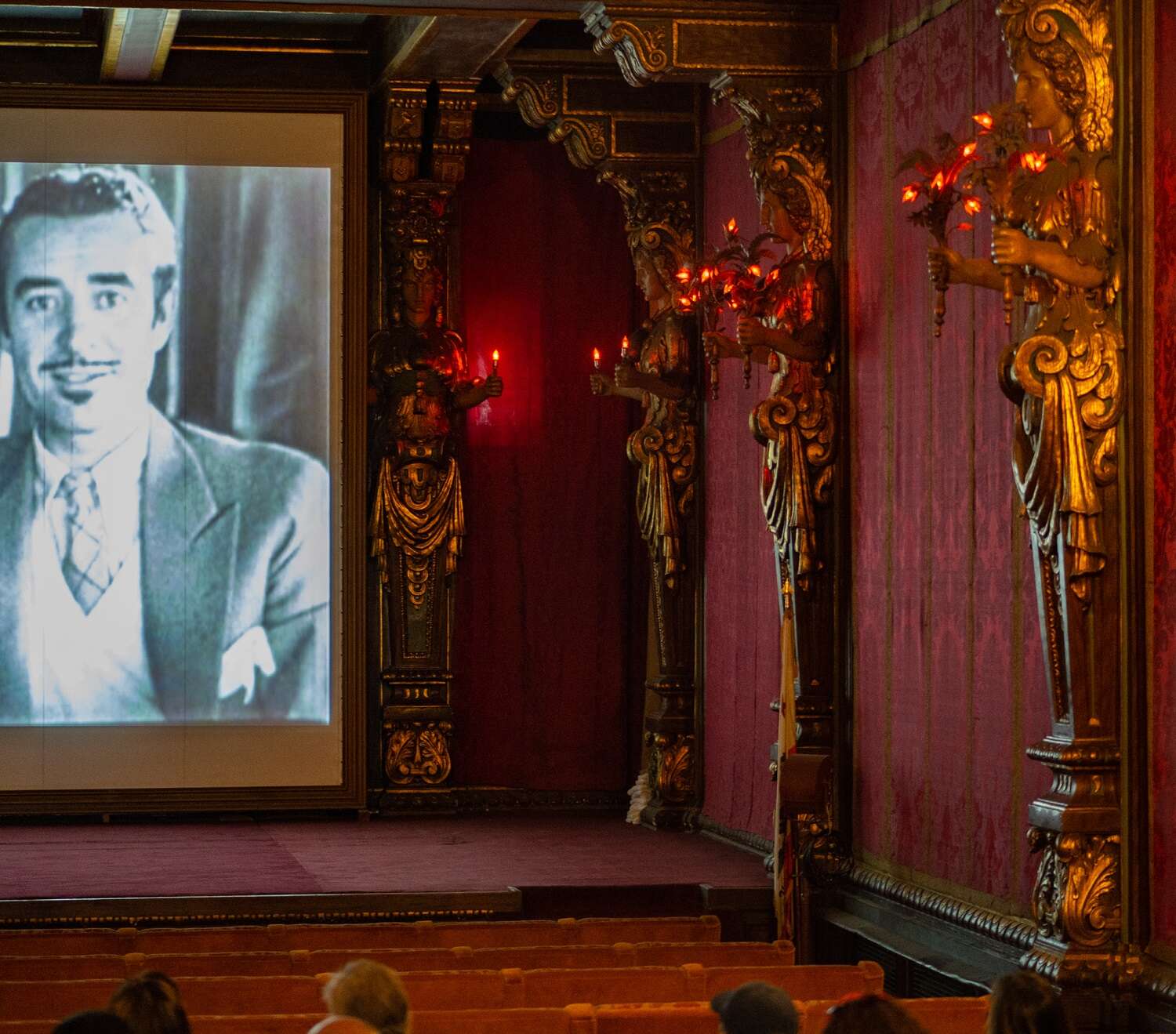 At the same time, you will find out whether you thought you saw grazing zebras from the window of the bus or they were really the inhabitants of the African continent.

We hope you can see this museum with your own eyes! It still has many mysteries and discoveries. And you can visit another interesting place in one day: the viewing point for elephant seals. We wrote about these picturesque places in the article about elephant seals.

And our experienced Travellizy Team will help you make your trip the most comfortable and enjoyable.