Greek Hydra. What to do at the foot of Eros

Each of the 227 inhabited Greek islands might be called the island of love. Stunning sunrises and sunsets, the beautiful sea and secluded coves are a haven for romantics. But it is Hydra that this status corresponds most of all to. After all, here is Mount Eros, where the guardian angels of all lovers live. You can come here with a tour of the islands (Poros Hydra Aegina) for a few hours, run through the local shops, go to the museum and swim in the nearest bay, but you will never understand and feel the real magic of this place. Travellizy recommends staying here for at least a week.

How to get to Hydra in Greece

In order to get to Hydra, you need to overcome several obstacles. First, fly to Athens. Then get to the port of Piraeus. You can do it in two ways: either by taxi, or by round-the-clock bus line X96, which departs in this direction every 15 to 30 minutes. The trip costs € 5 and takes an hour and a half. In the port, you need to find a ticket office for a company that sells ferry tickets in this direction. This is easy to do, the main thing is to read the inscriptions on the kiosks carefully as ticket dealers don't understand English well. A ticket costs € 20-30 one way. You can buy a ticket in advance on the website https://tickets.ferries.gr  The journey time is from one and a half to two and a half hours depending on the ferry class and its route. 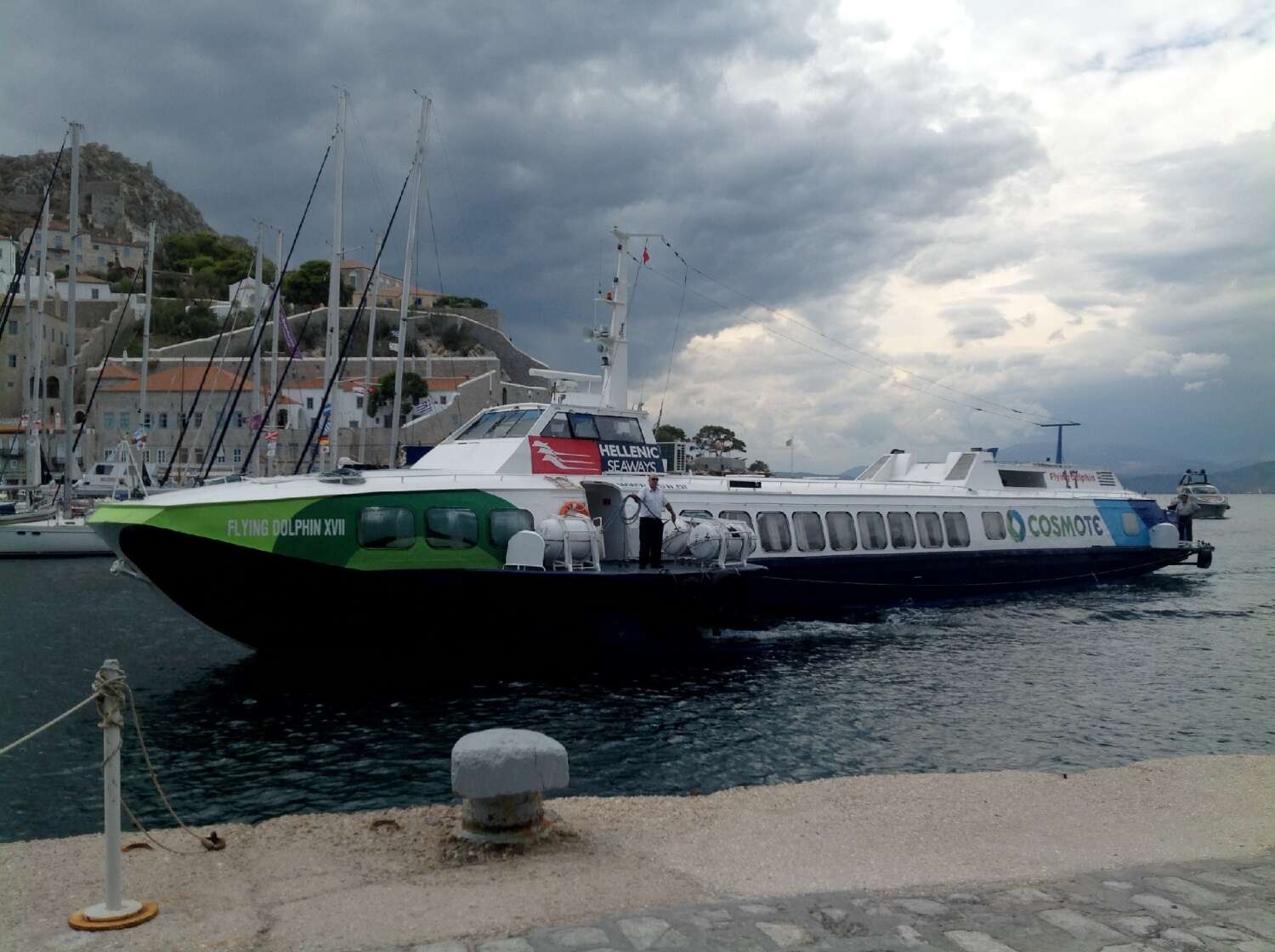 Before going to Hydra, we recommend you to take care of accommodation in advance, because there is not so much of it. Accordingly, get ready, as the prices will be higher here than in other places. Despite this, everything you need can be found on Hydra - from budget hotels to luxury apartments that are located in a real mill. Villas are rented by the week. 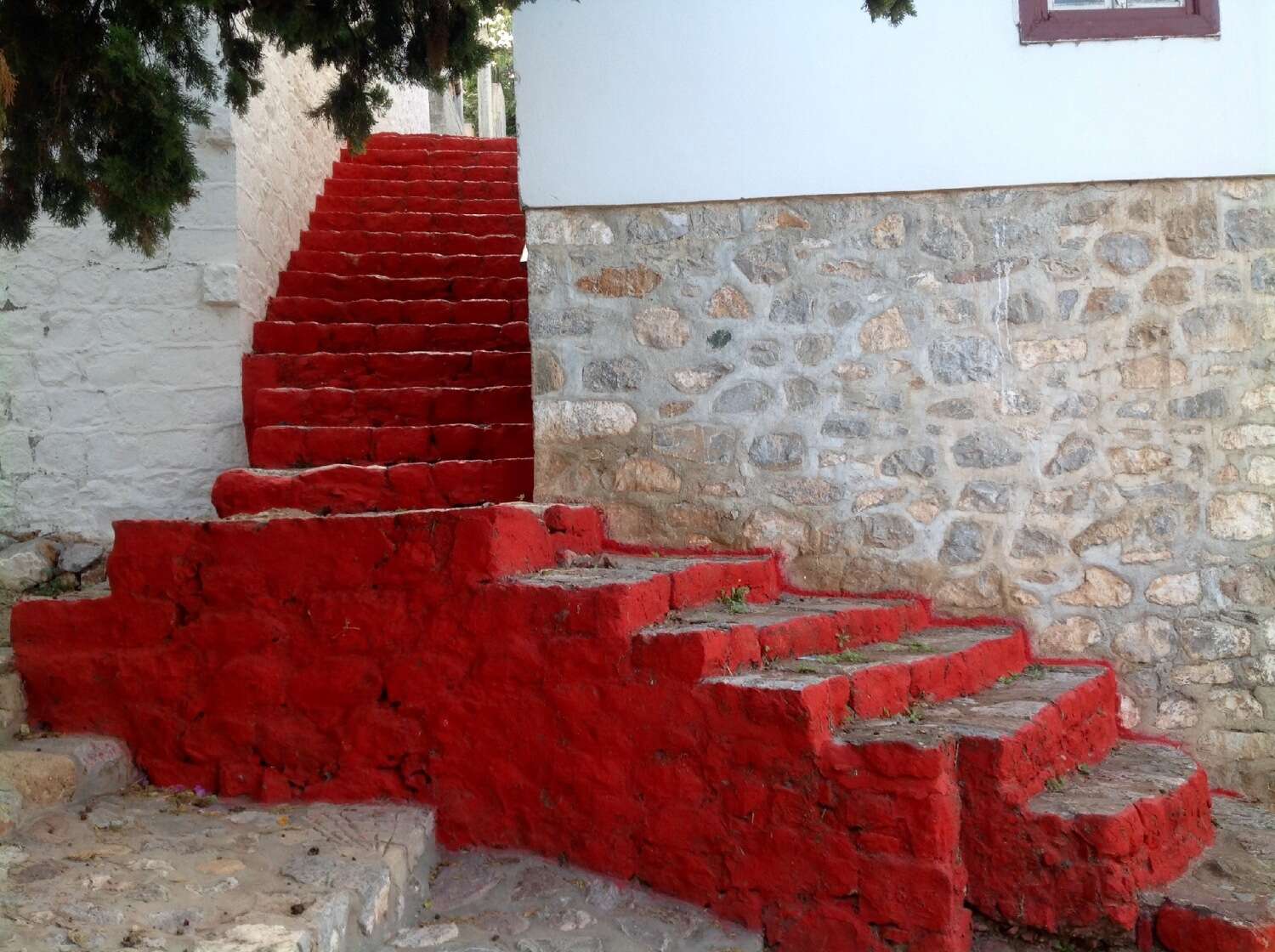 Life hack: when choosing accomodation, don't forget that the streets of the town go up sharply almost immediately behind the port. Therefore, beautiful landscapes will be visible from almost all the windows; however, it will not be easy for unprepared tourists to get to the top every time. 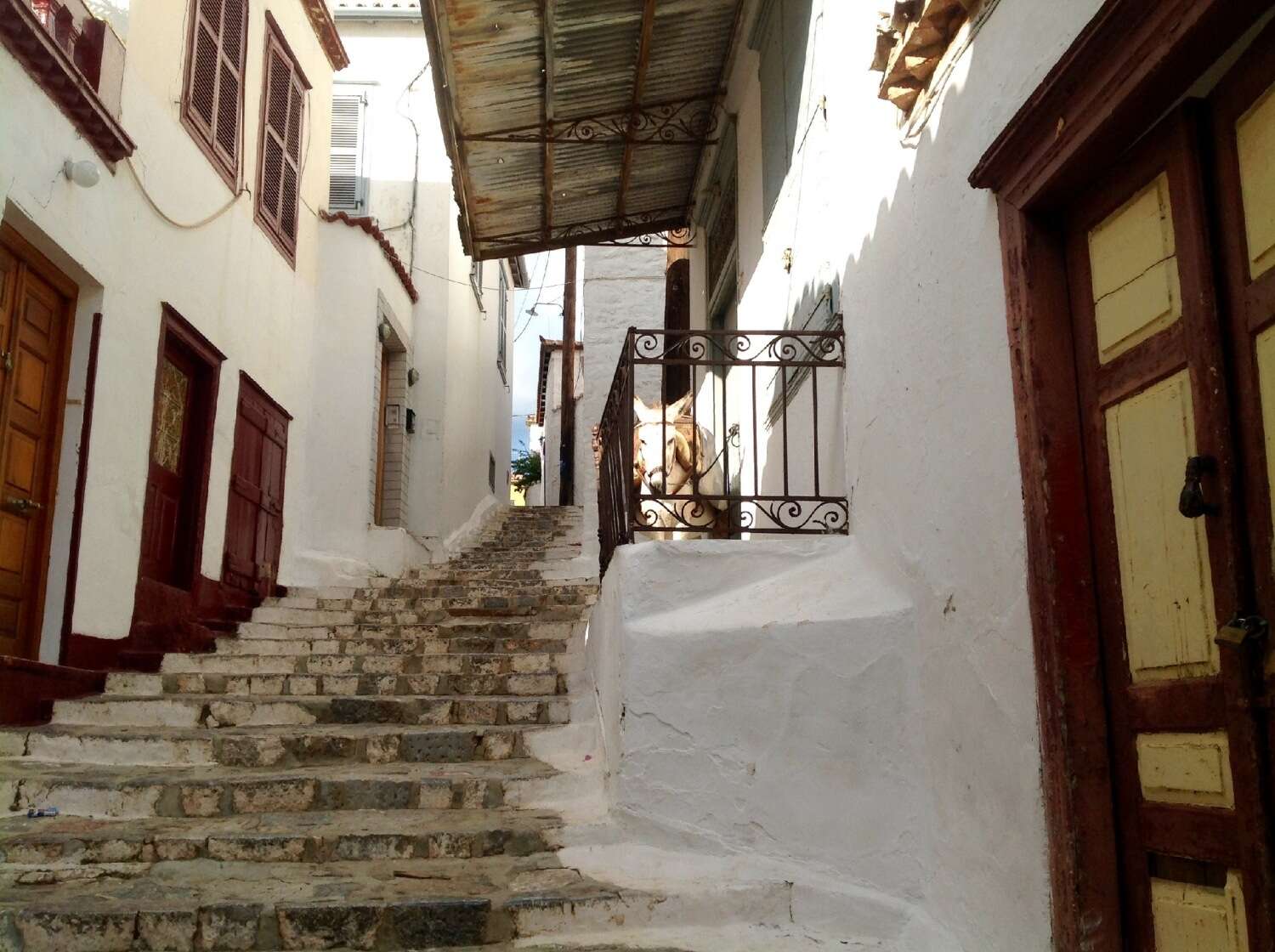 Another life hack: An alternative to hotels is the rental of private houses. These are most often historical houses (there are practically no new ones), where some captain might have lived once. On the walls, you will see old maps, paintings, and in the kitchen, you will definitely find old utensils. The main difference from the rest of the houses is a patio with a view of the bay and the port. Because the real captain must always keep an eye on his ship and know the situation around. 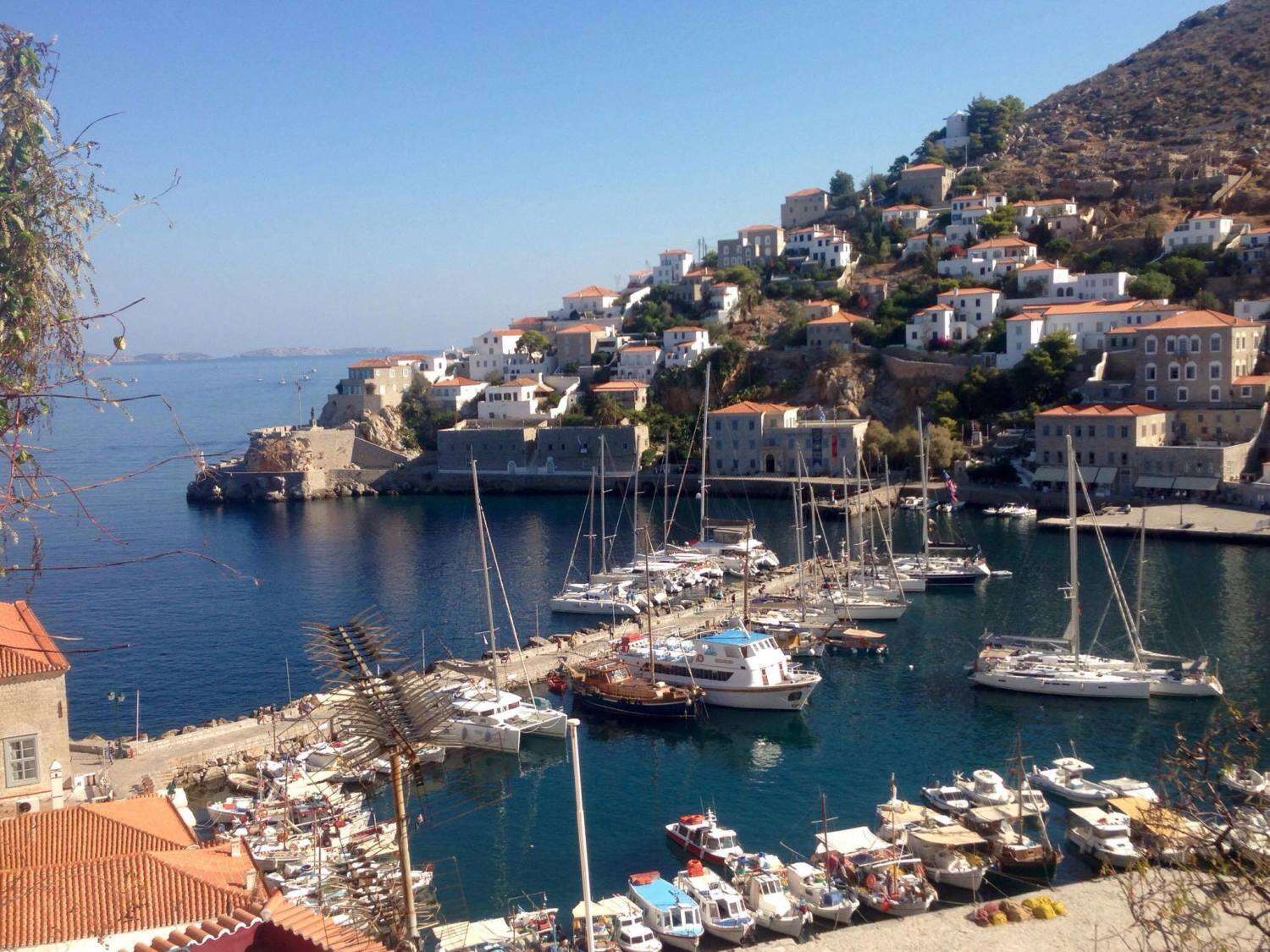 The latest life hack in this chapter: We recommend you to search for housing options on a website created by a local resident Kelsey Edwards. You will also find information about holidays here as well as a list of all galleries and designer boutiques, and even information about what you can do on Hydra in winter.

Donkeys, cats and churches - the three highlights of Hydra

In addition to the main town, there are several villages on the island - Mandraki, Vlikos, Palamidas and Molos. All of them are located within walking distance of the central pier. It is possible to get there with suitcases in two ways: by boat or by local transport - a donkey. 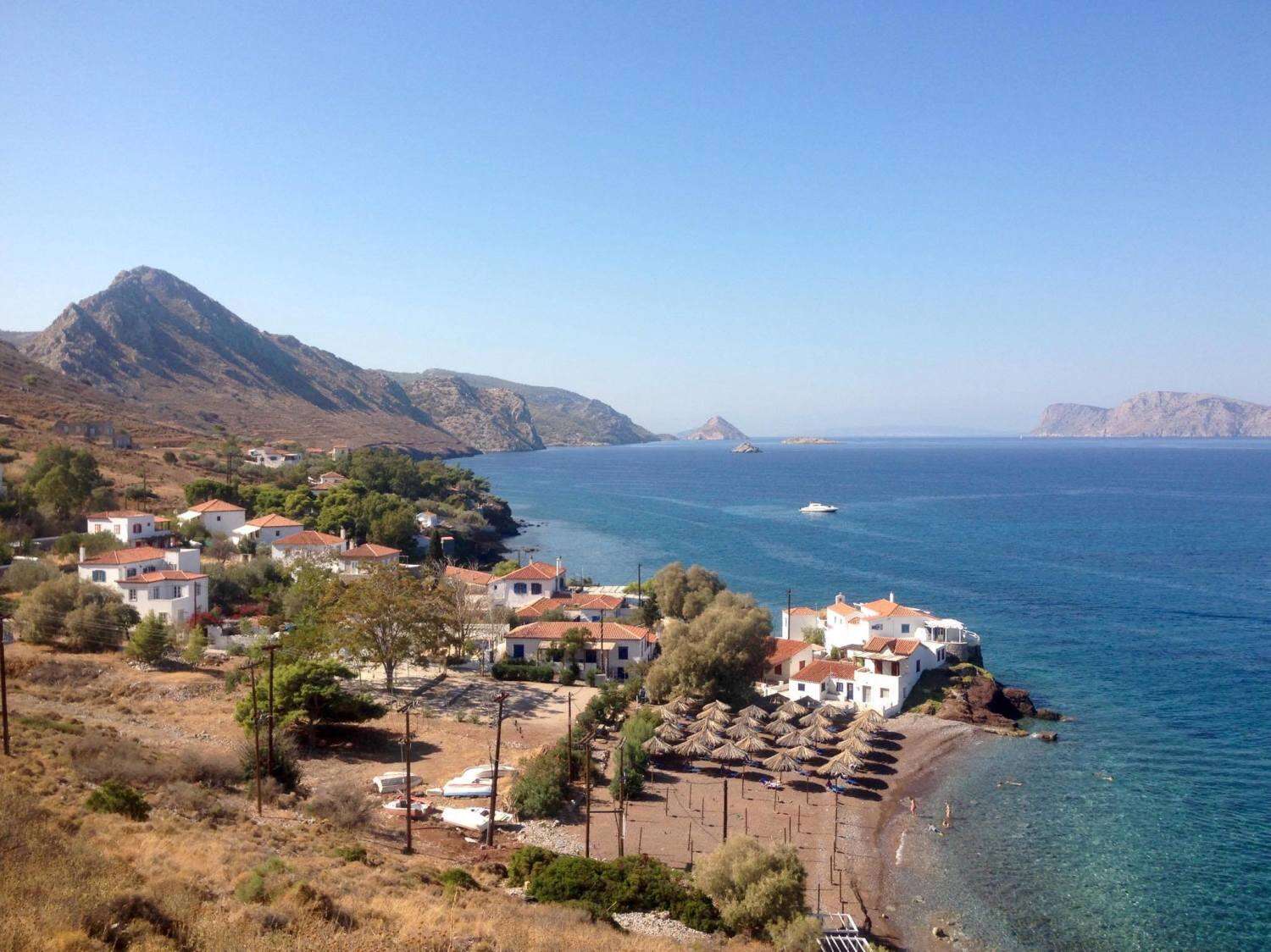 There are four local motor vehicles on the island - a fire engine, an ambulance, a garbage truck and a mini-truck that we found on the farthest edge of the island. Just imagine 4 cars per 64 square kilometers! We add that there are no mopeds and even bicycles on Hydra. They are simply banned here. Therefore, the main ones are donkeys and mules. It is they who deliver construction materials into the city and islands, every morning they are transported goods to local shops and restaurants, tourists and their luggage are loaded onto them. This is the first highlight of the island. 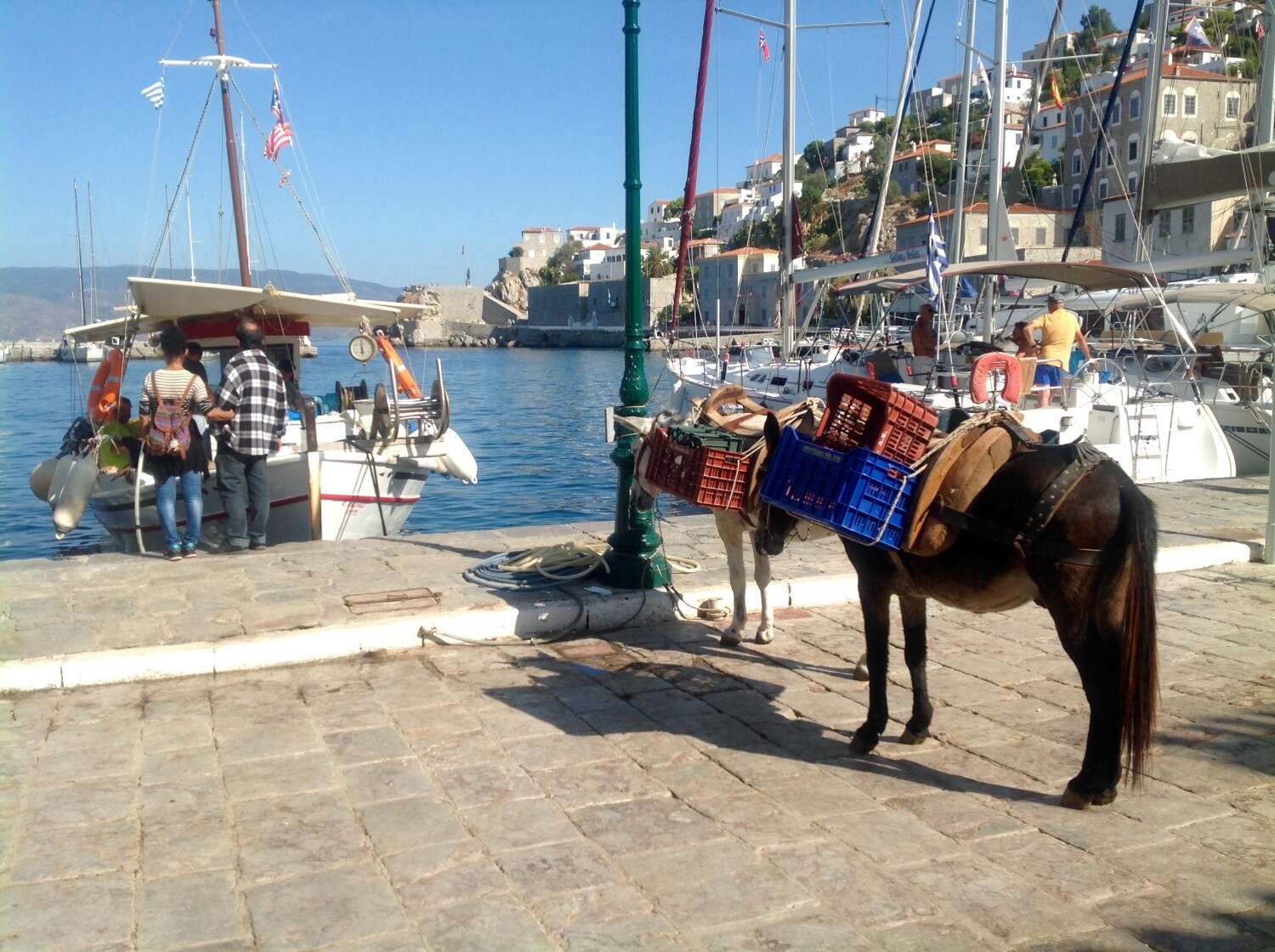 Its second feature is cats. Cats live here on every corner, and there are a lot of corners here! They are the real landlords of the island. They catch harmful rodents and adorn the local landscape. 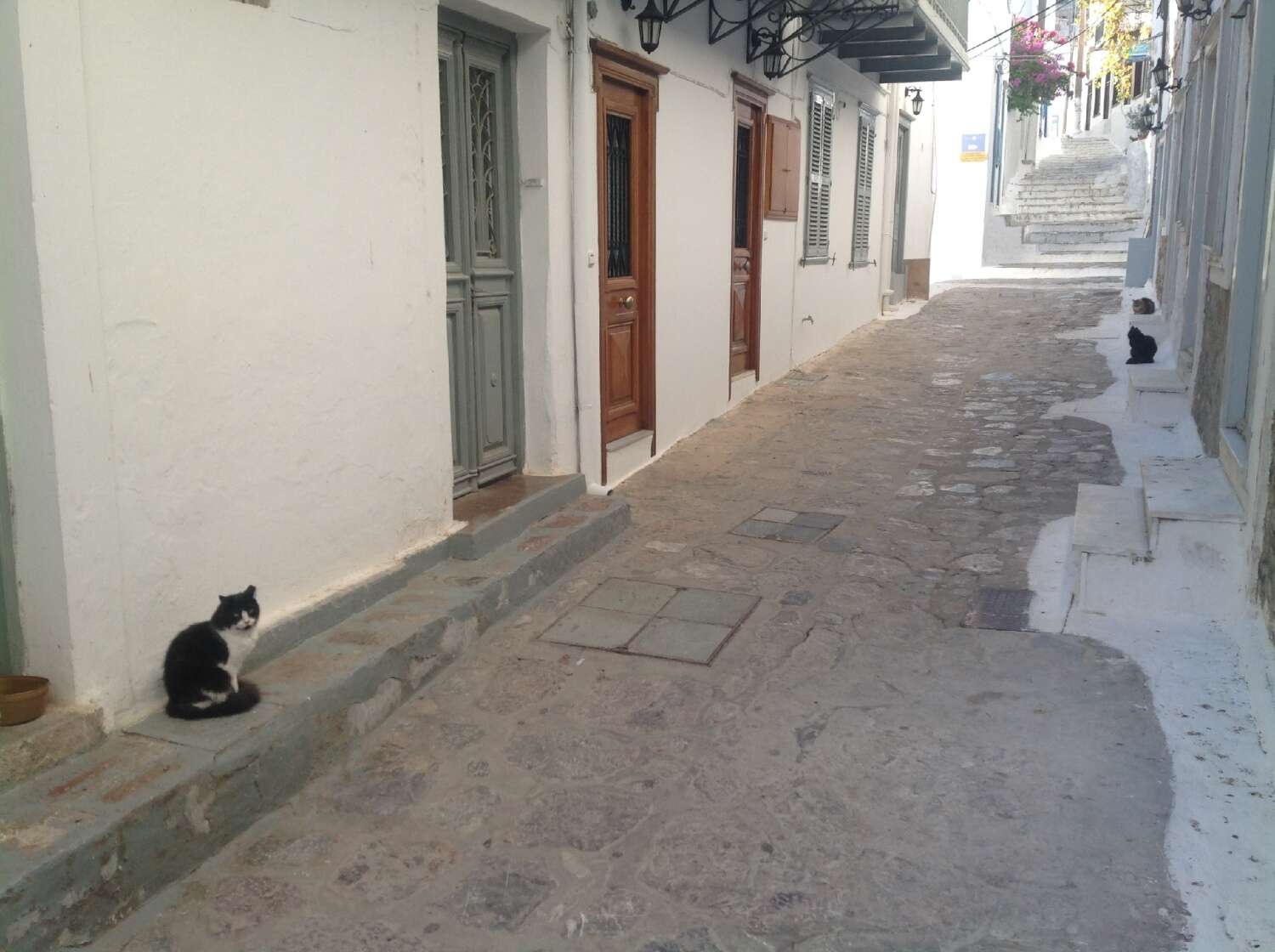 The third feature is churches. On a small piece of land, there are 300 churches and chapels and 6 monasteries. In addition to churches, there are several historical museums and an art gallery, which is open from May to October. Generally, the island hums with life at this time. Because of the close proximity to Athens, the island was chosen by the local bohemia, which gets out here from the hot metropolis. 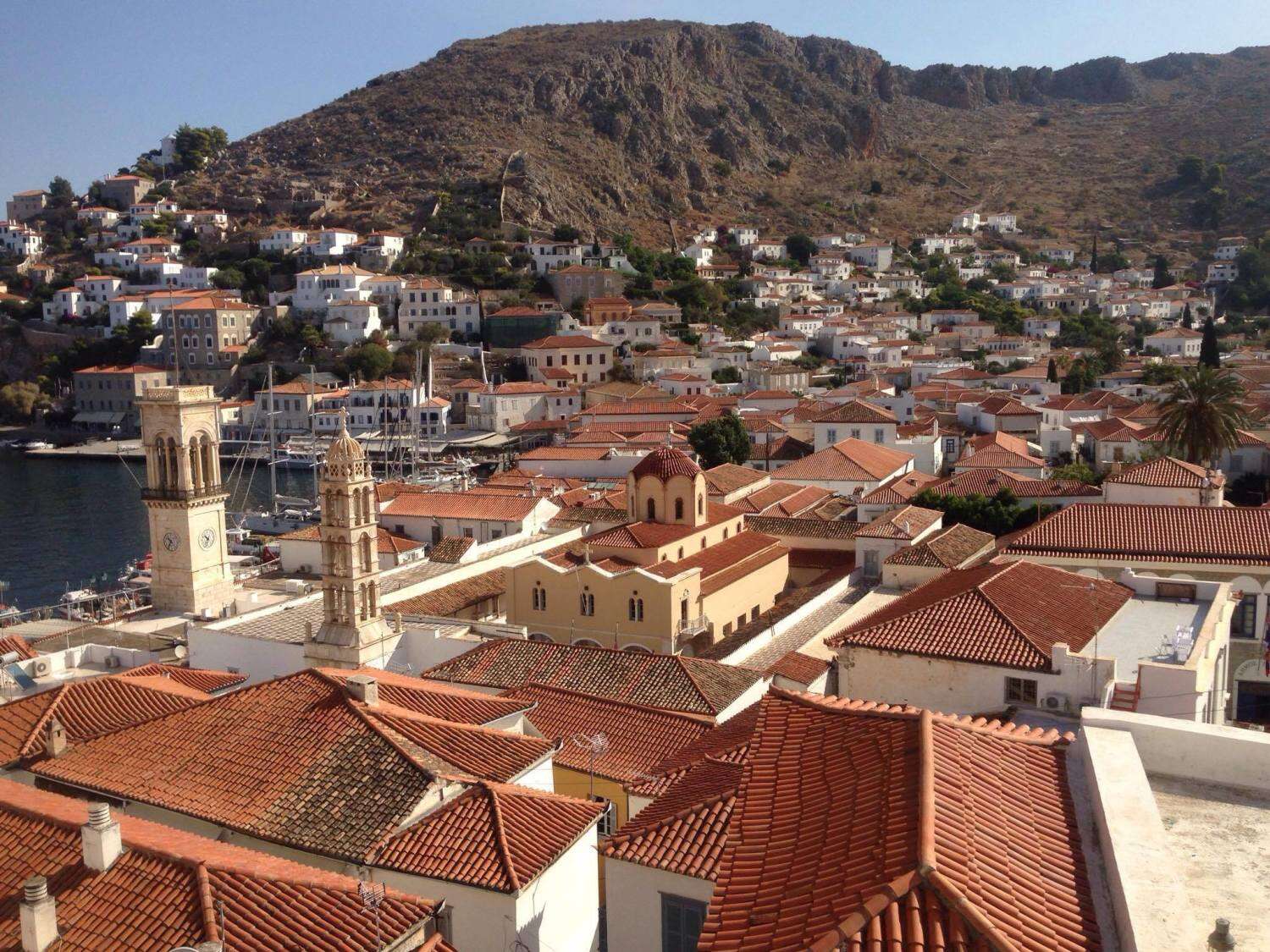 From pirates to celebrities. The glorious history and bohemian present of Hydra

Hydra has always been a pretty mysterious place. The port, closed on all sides by rocks, and a complicated current made it inaccessible for ancient merchants and travelers. In the Middle Ages, the island became a refuge for pirates, and after a couple of hundred years, many of the heroes of the liberation movement and even the first president of the Greek Republic came from here (the island of admirals and captains). 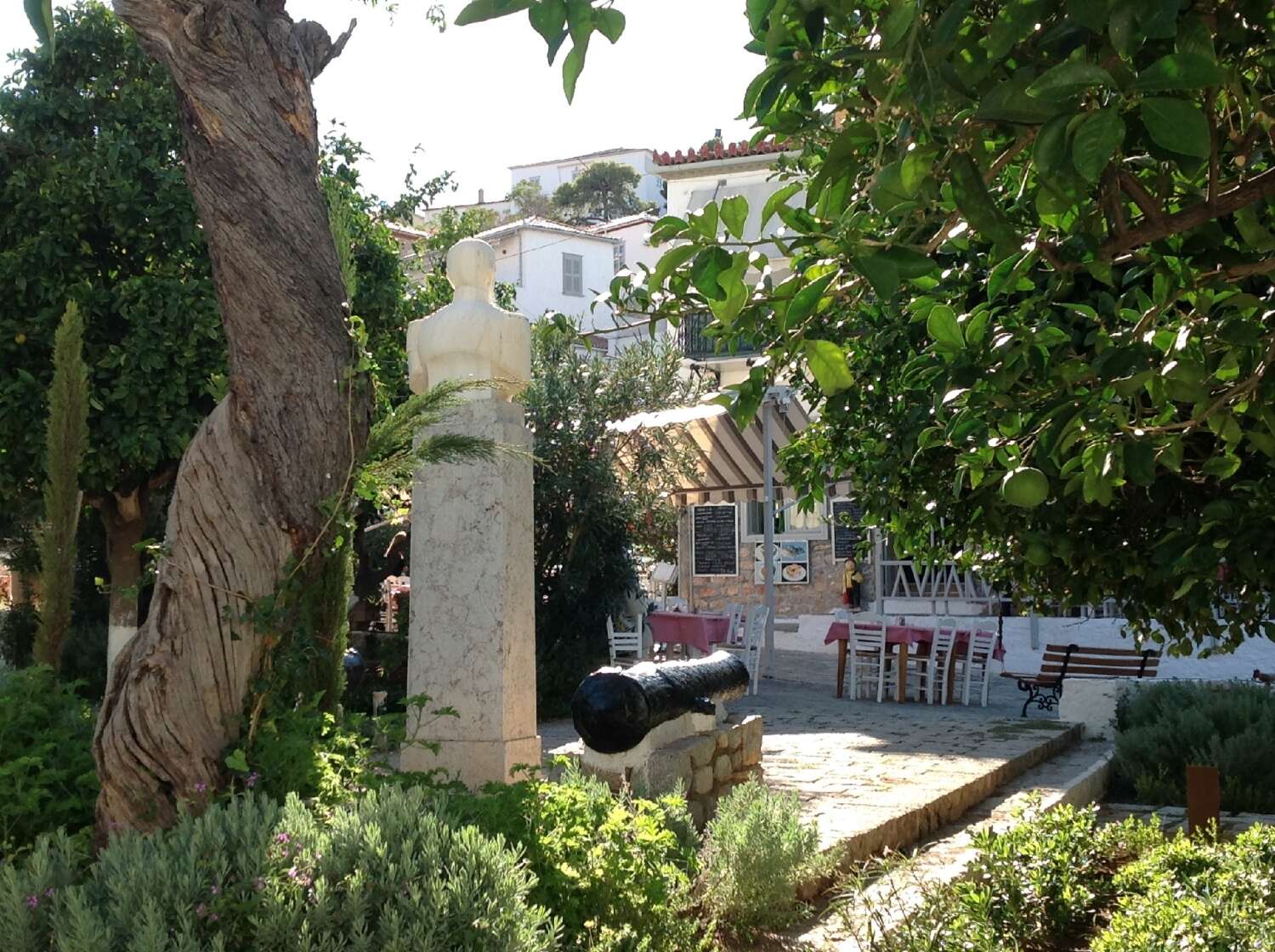 Therefore, several holidays associated with the sea glory of Hydra are celebrated here magnificently. And in June, during the celebration of Miaulia, a symbolic Turkish ship was burned to the music and salutes in the harbor. 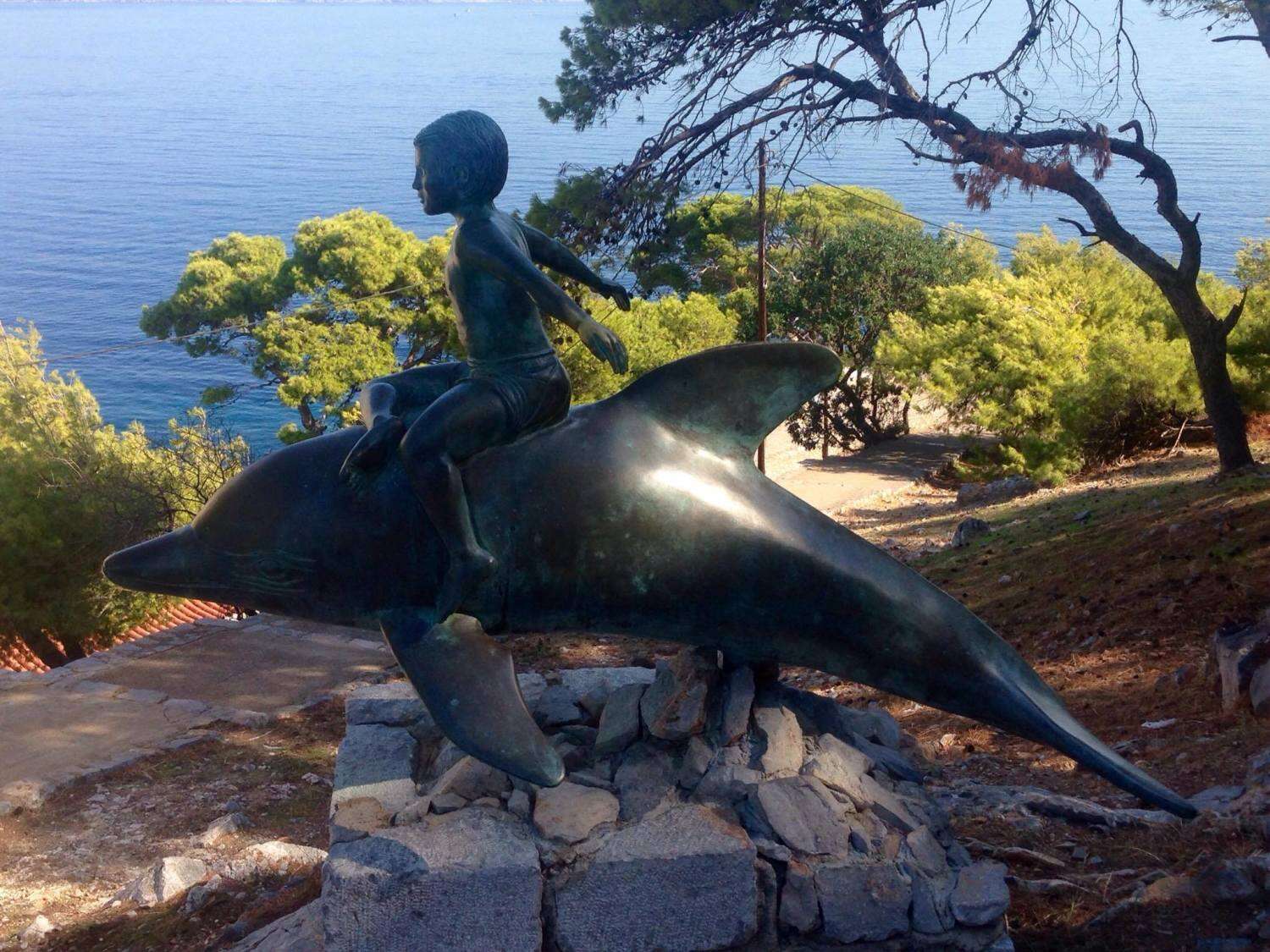 After Greece gained its independence, Hydra’s strategic role has waned, and unhurried fishing days began to pass on the island. This lasted until a film with Sophia Loren “The Boy on the Dolphin” was released in 1957. Since that time, a steady flow of tourists have been rushing here. Audrey Hepburn, Brigitte Bardot, Jackie Kennedy Onassis, Valentino and many others visited it, as evidenced by photographs on the walls of old taverns. They say that even Sir Paul McCartney got a house somewhere on the deserted edge of the island. 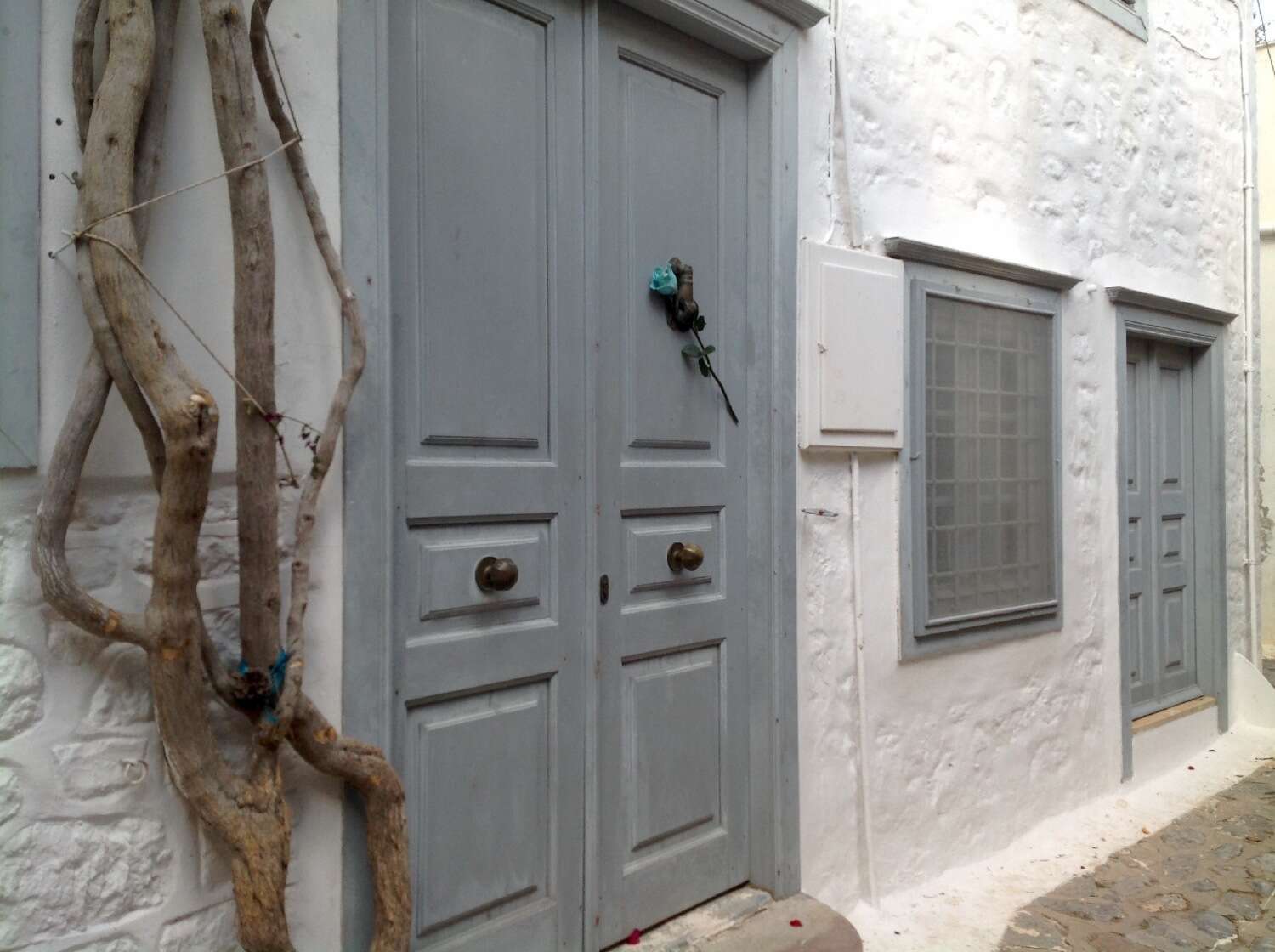 In the 1960s, Leonard Cohen bought the house on Hydra - the legendary musician who performed the Hallelujah. On Hydra, he lived a happy 7 years and wrote his best songs and even a novel. And nowadays, his fans hold a festival every two years.

When to conquer Eros 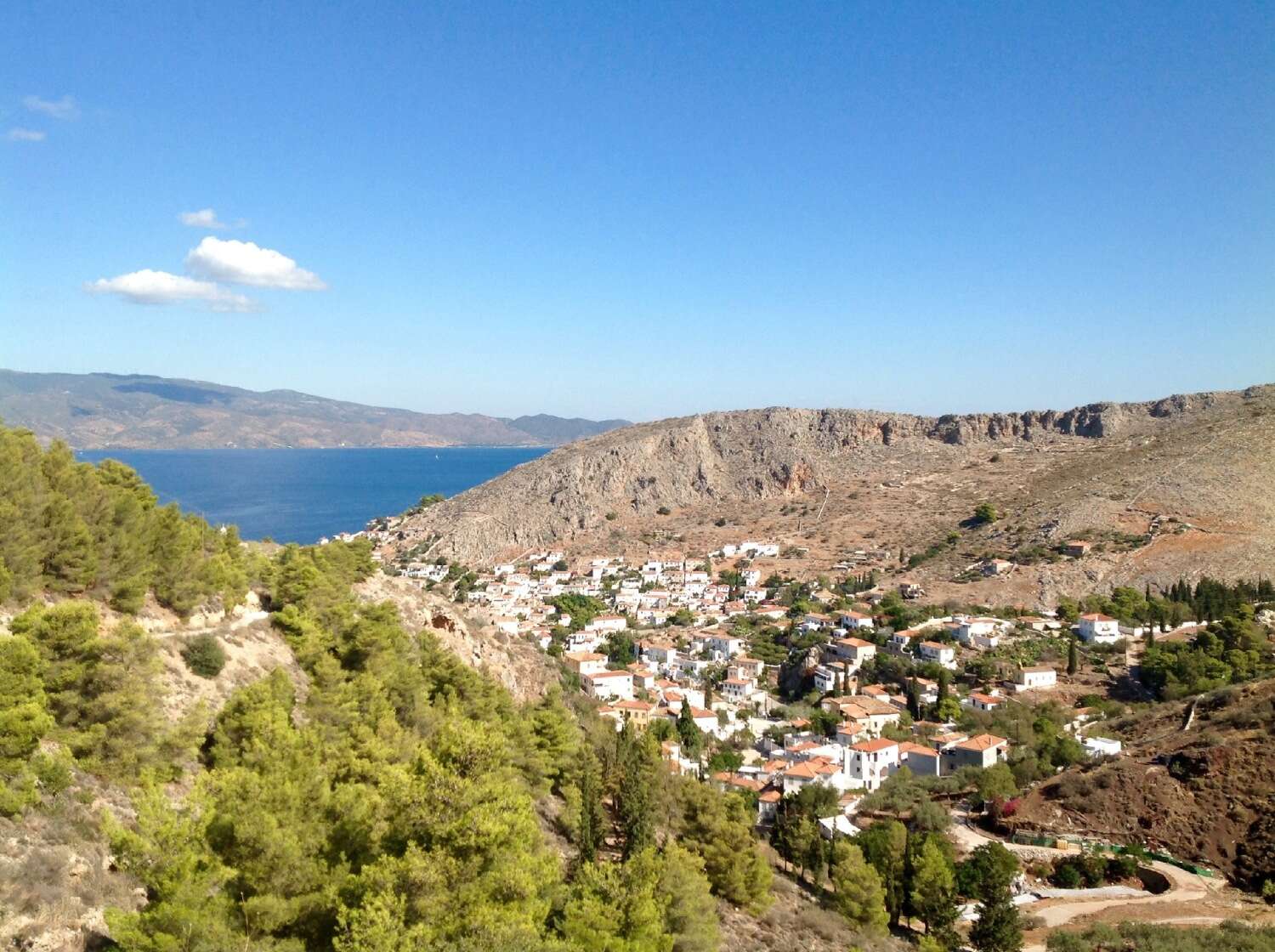 Eros is the highest point of Hydra. It's the mountain, which rises above sea level at 588 meters. It hides the beautiful dawn from the locals, but keeps the morning coolness from the summer heat longer at the same time. To conquer Eros, you need a little effort, comfortable shoes and a few hours. At the foot, you will find a plan for climbing the mountain. 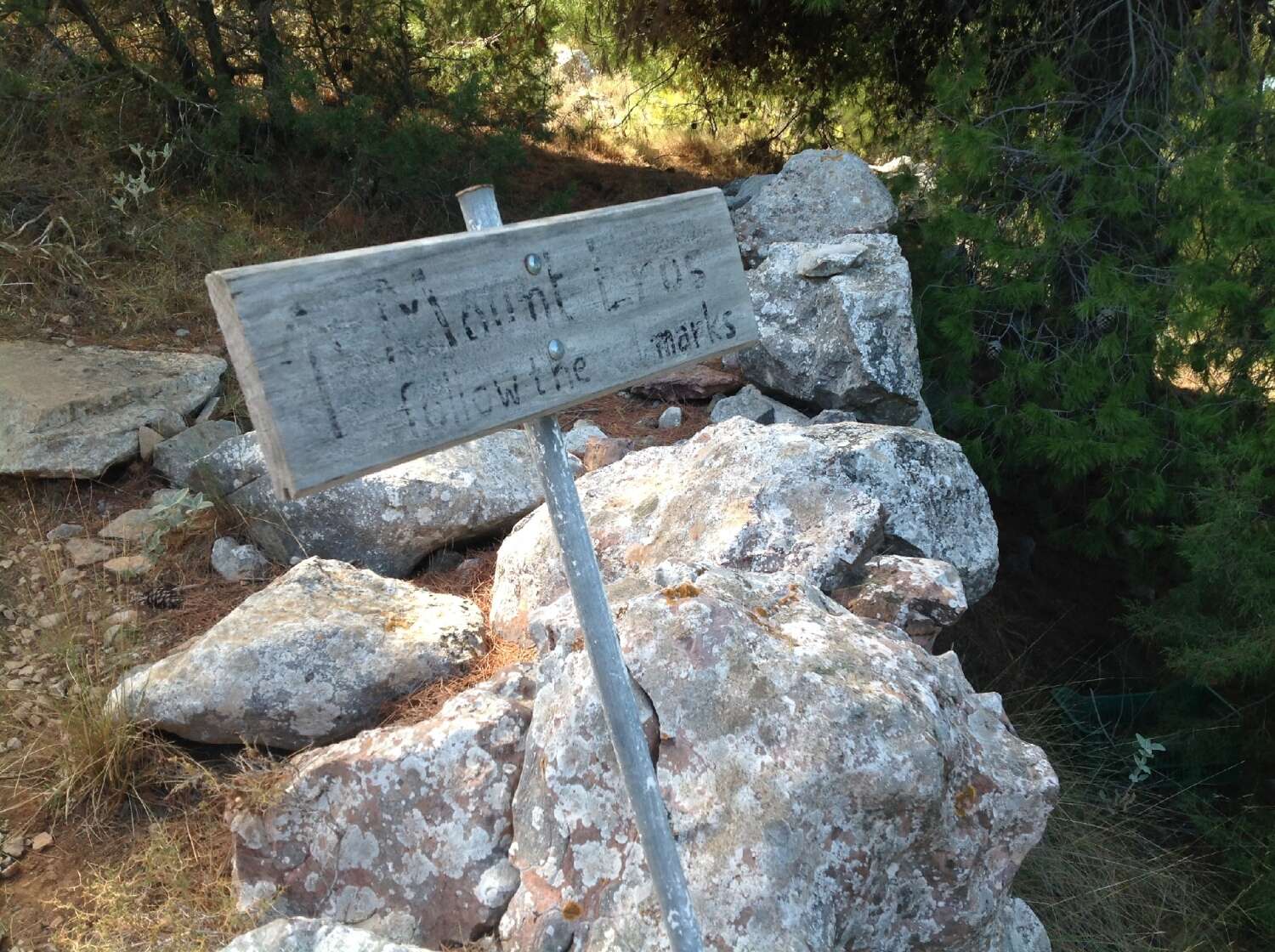 Take a picture to have it always with you. However, it is very difficult to get lost there. The entire route is marked along with special marks. You will overcome the first half of the way to the monastery quite easily - a wide road leads there. Make sure you make a small stop there, enjoy the silence and the shadow. Then, you have to sweat and even climb a rocky mountain. But your labors will be rewarded with a breathtaking panorama of the city and other islands of the Saronic Gulf. 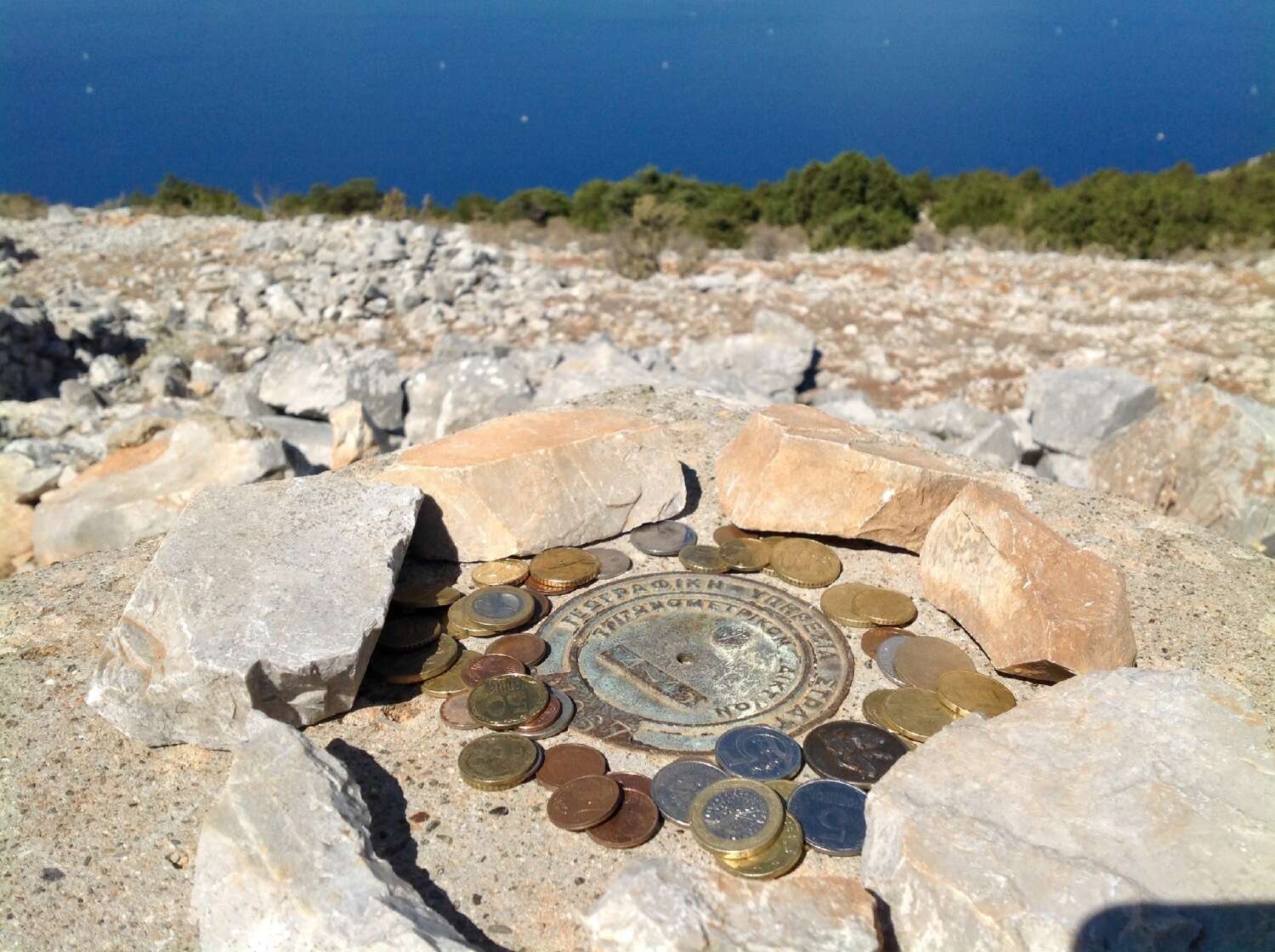 Life hack: we recommend you to start climbing in the early morning, when there is no heat, and make sure to take water and a light snack. For a hike, it is not necessary to wear special mountain boots; a comfortable, lightweight closed sports shoe with non-slip soles will be sufficient.

What to do on Hydra: entertainment

Despite the outward monotony of life on the island, there is something to do every new day. For trekking lovers, there are several walking routes to the far parts of the island, where ancient monasteries and a lighthouse are located. They will take a whole day. 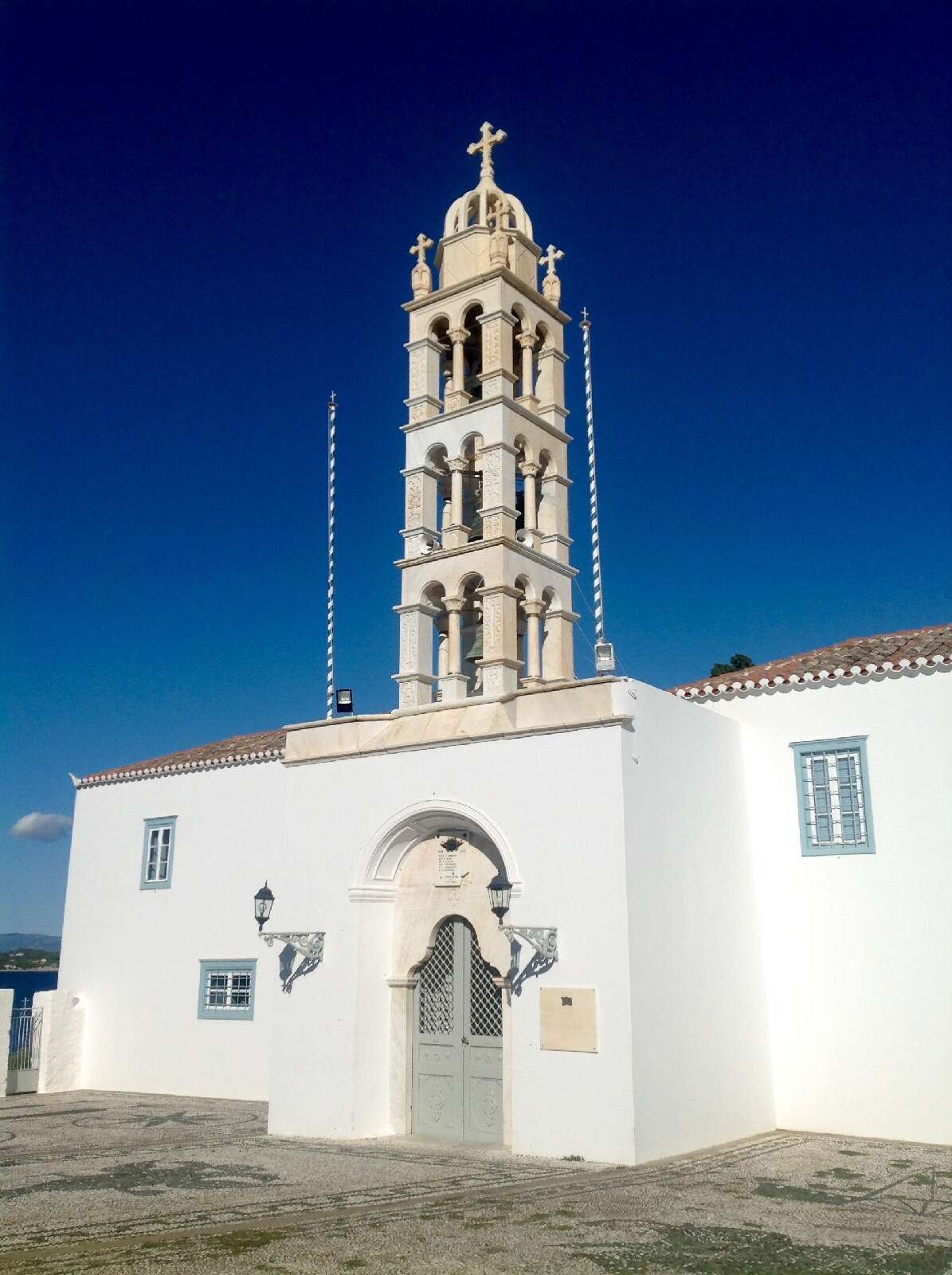 Wildlife lovers are recommended to visit the equestrian rest home and horseback swimming in the sea.

If you are fascinated by the nightlife, be aware that in the season, taverns and bars work until dawn, the beaches turn into dance floors, and night bathing is a favorite entertainment for both locals and tourists. 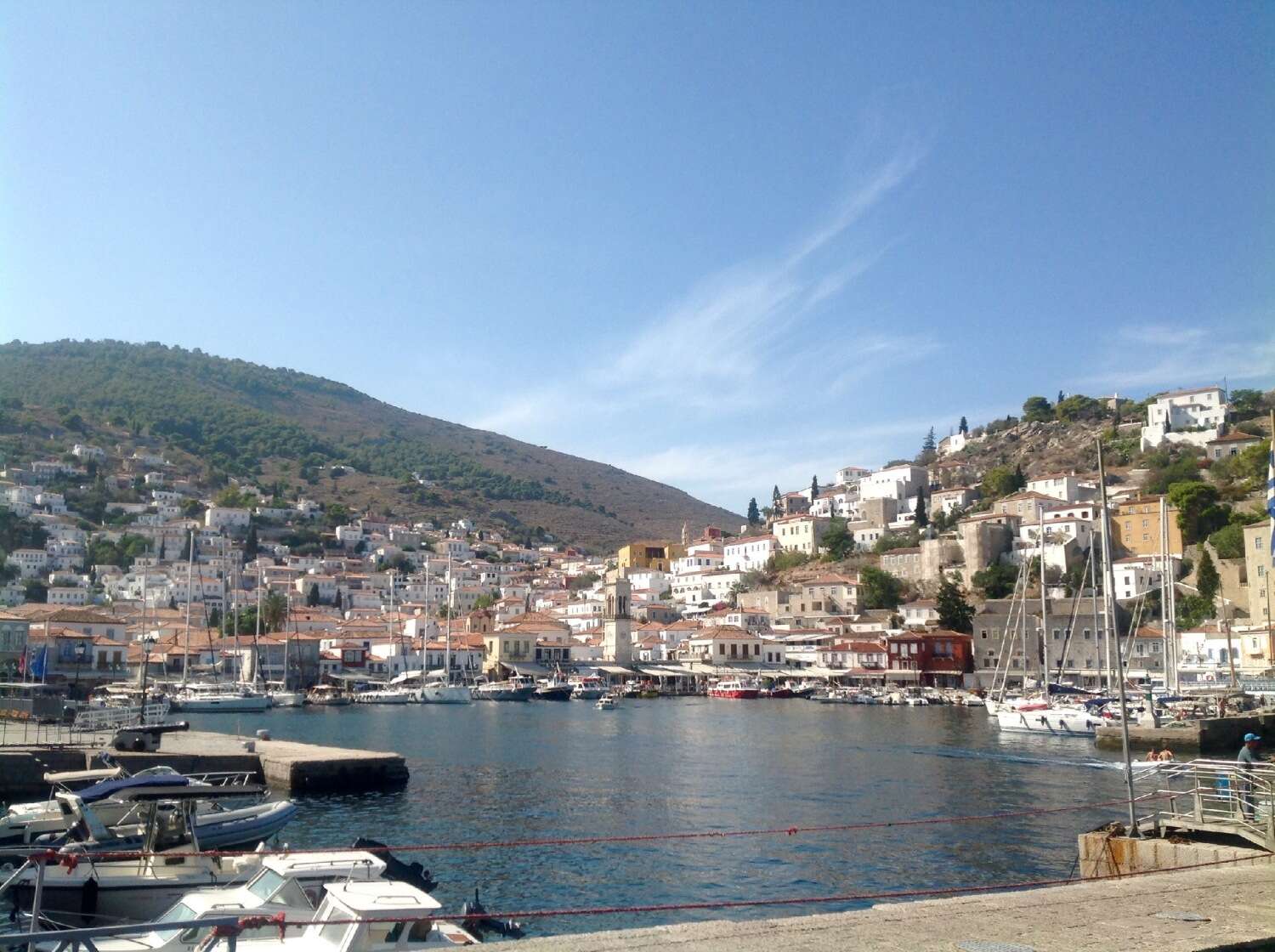 Exploring the beaches and watching the sea inhabitants is available to everyone and is completely free. The water off the coast of the island is so clear that you can see the fish that live off the coast or swim here to hunt even from the road that leads you to other villages. At the same time, fish are not confused that you are also in the water. It all looks like you became the hero of the National Geographic movie. 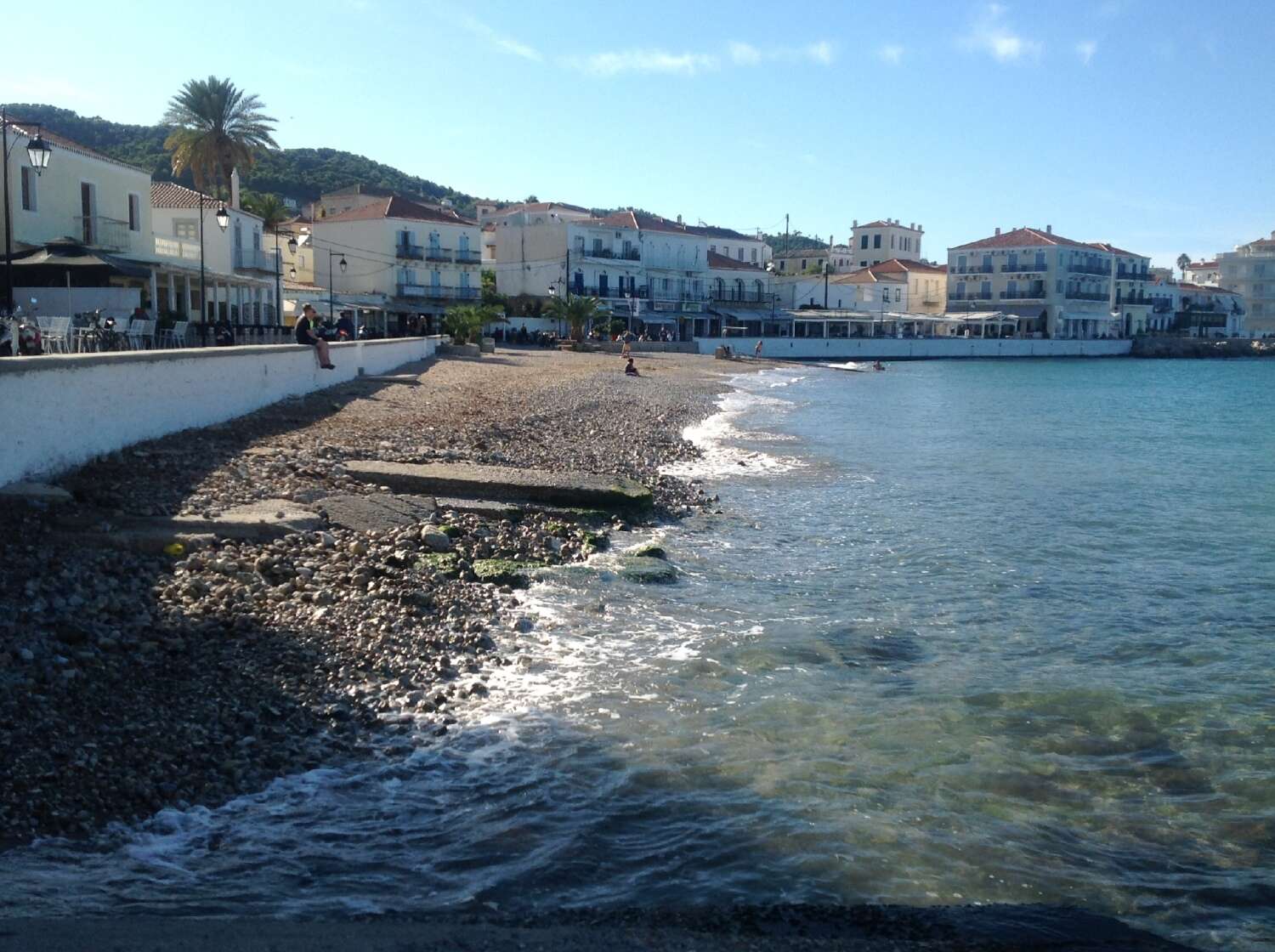 Do you like watching the fish or fishing? Local fishers will take you to fish places with pleasure.

For history fans, there are several museums on the island, a pair of old forts and a cemetery that silently keeps Hydra’s past. 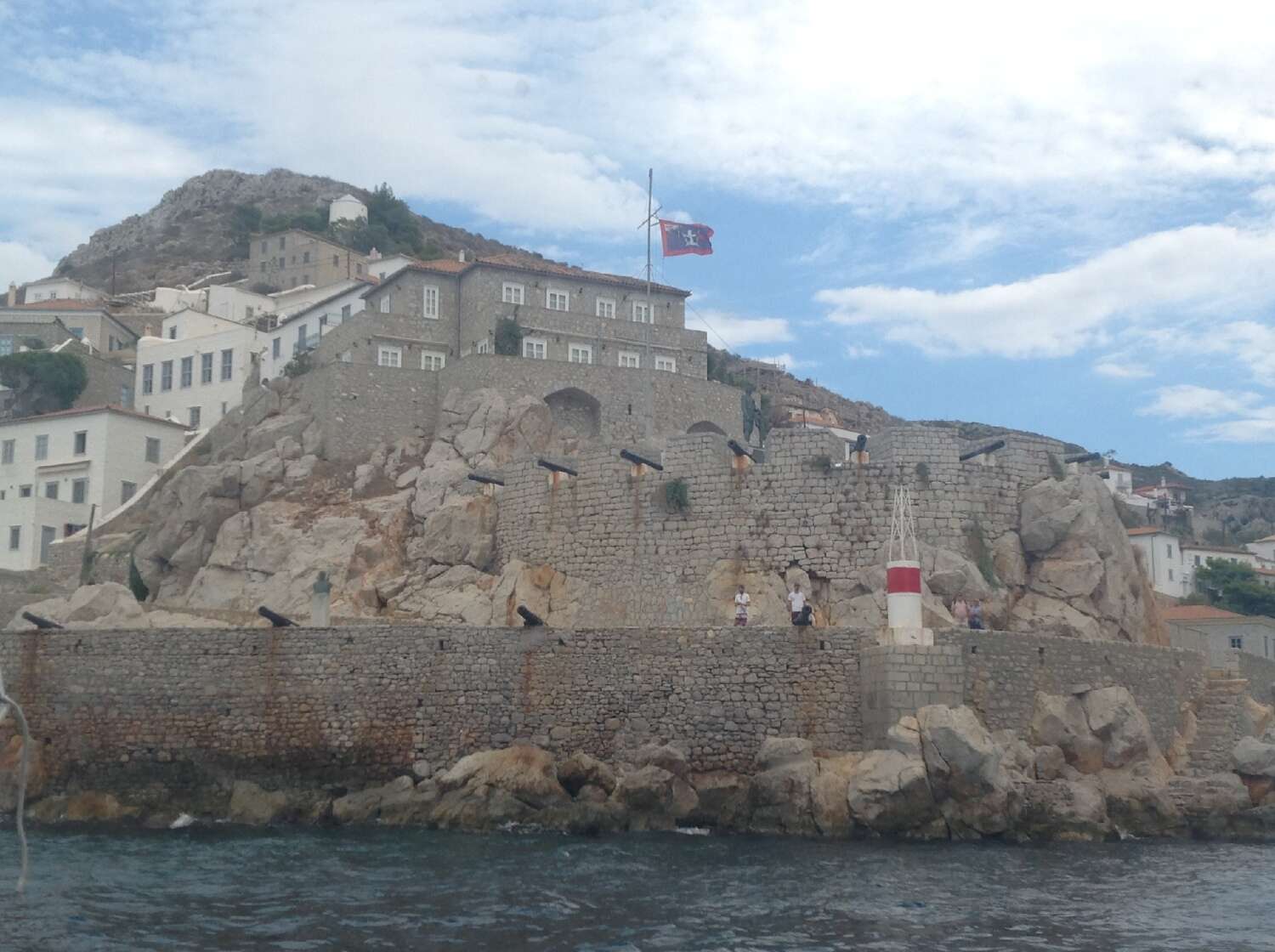 Shopping fans can recommend numerous shops, where artists and designers of bags, clothes and jewelry exhibit their products. In the summer, they massively come from Athens here. 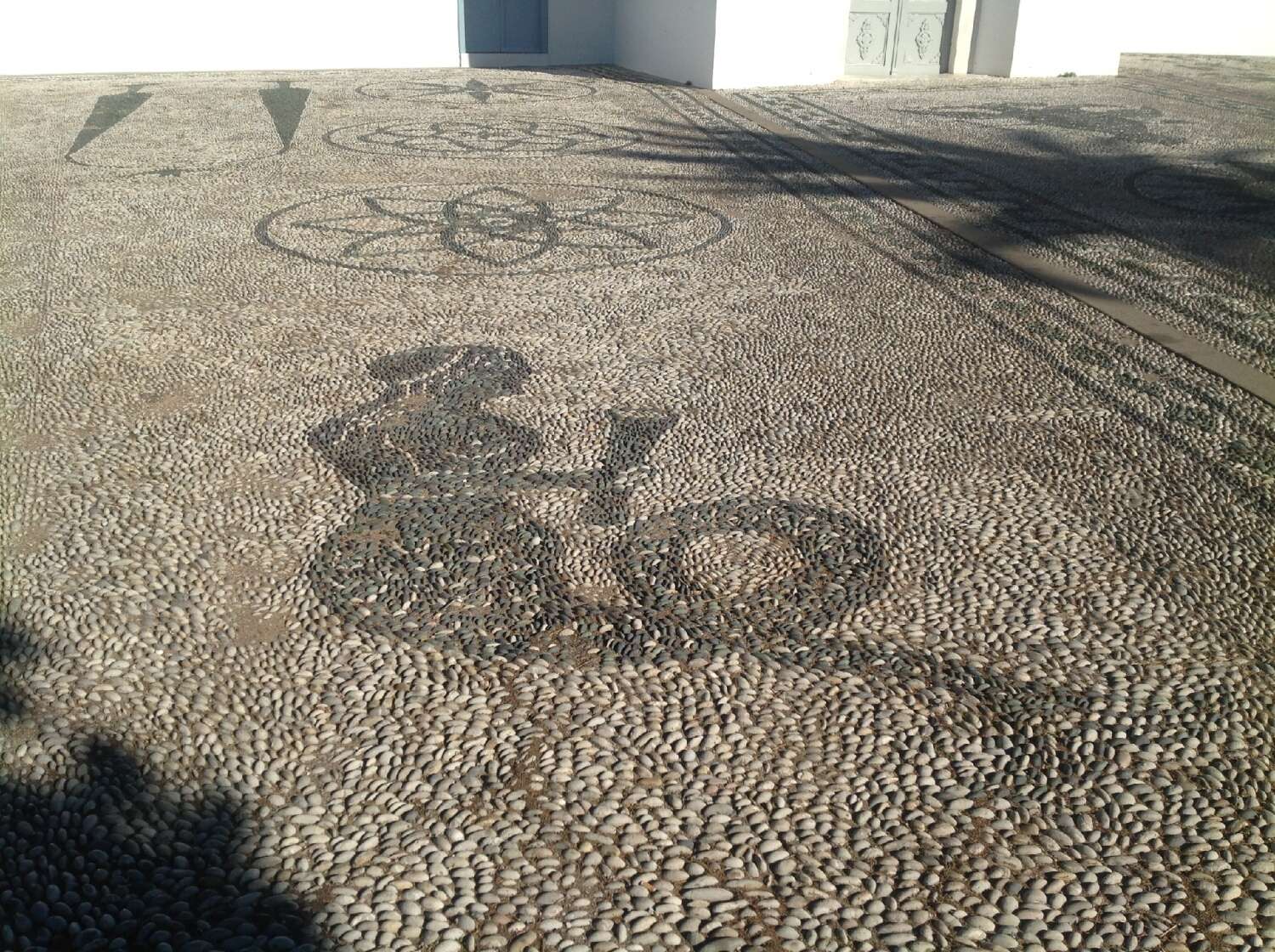 If you visit a unique island called Spetses, it will be another pleasant one-day trip. However, it will immediately become noisy for you from cars. But this island is still worth visiting. 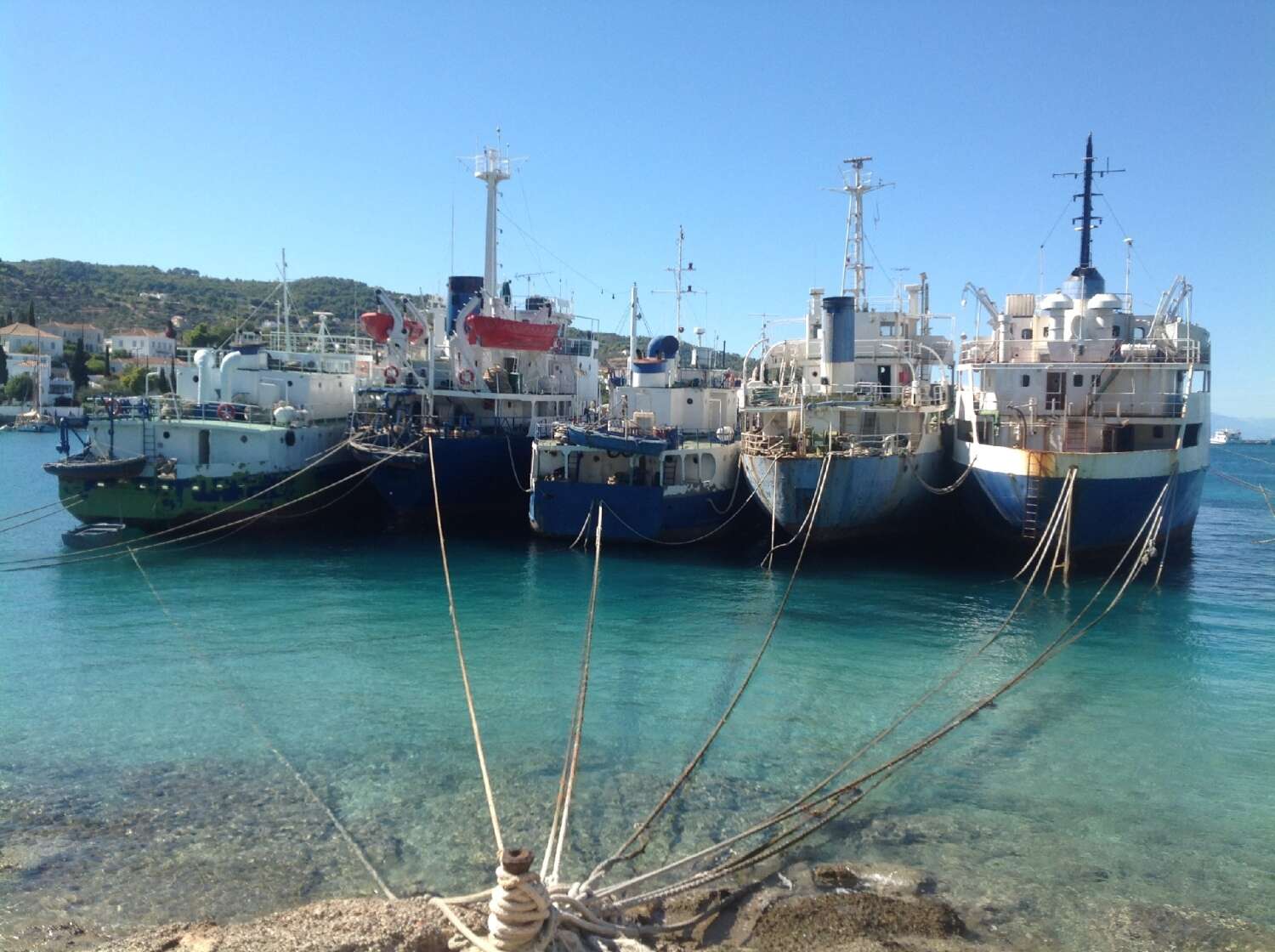 Go there and get acquainted with the story of an amazing woman - Admiral Babulina, take a look at the lighthouse and stroll into the local park, where there are cute art objects and a small shipyard graveyard. You can get to Spetses only by ferry, travel time is 30-40 minutes. The main thing is be careful and not to miss the last ferry, which departs from here at 19:25. 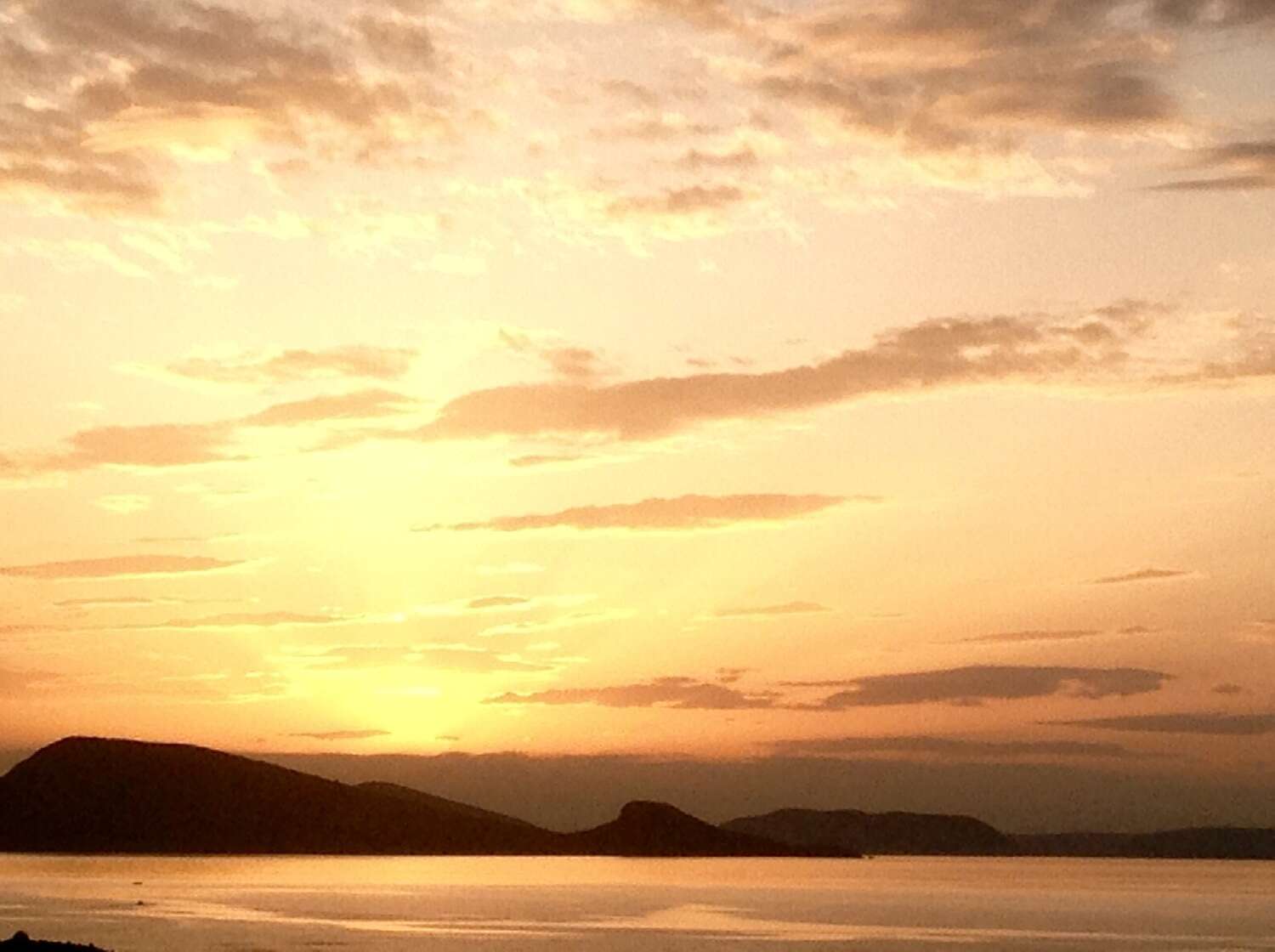 Sunset on Hydra is not just a sunset. This is a show, which is being awaited for the whole day, checking the weather and watching the clouds. But even if the day was bad, everyone still gathers on the embankment in restaurants and watch a single ray of the setting sun, which will break through the clouds and give hope for another wonderful day tomorrow for everyone who is at that time at the foot of Eros. Which is eternal, like love itself.