Tulip Festival: the symbol of Istanbul comes alive in April

What picture in your imagination raises an ancient Istanbul? Hagia Sophia (Ayasofya)? Galata Tower? Beautiful Bosphorus? Absolutely. But the “capital of the capitals” may also be associated with tulips. After all, this flower is the symbol of the city. 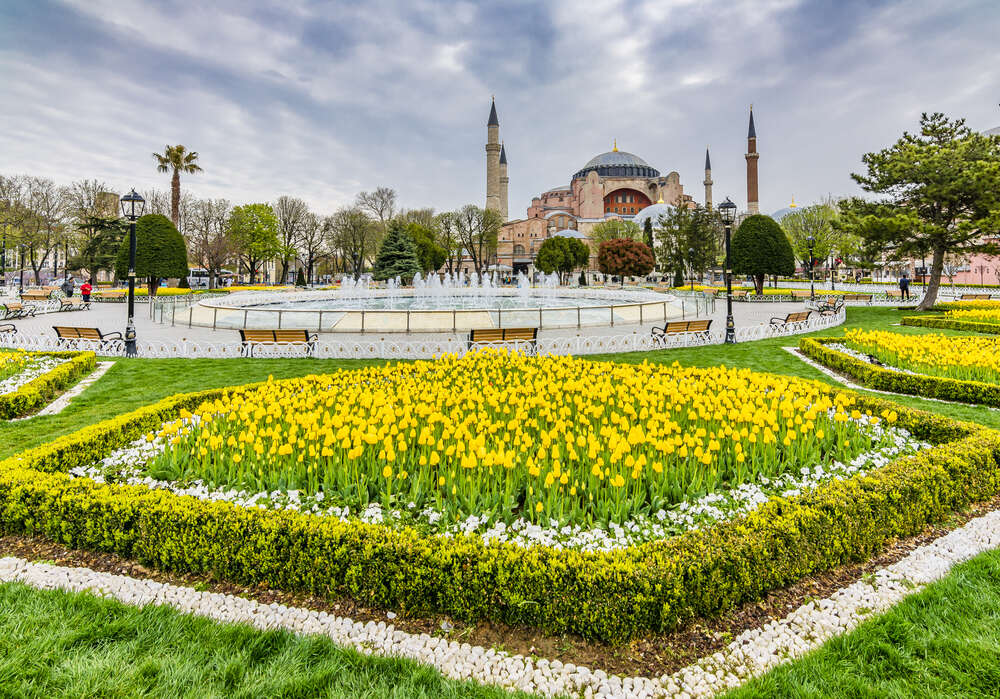 Each spring, New Rome's parks are covered with a colorful carpet of flowers. People have been celebrating this holiday in Turkey since 2005, and nowadays, the whole April annually, you can admire in Istanbul a huge number of tulips, which can not be found even in Holland. The residents of Istanbul have planted millions of flowers in order to intercept the Dutch precedence and prove that tulips are an honourable symbol of their city. 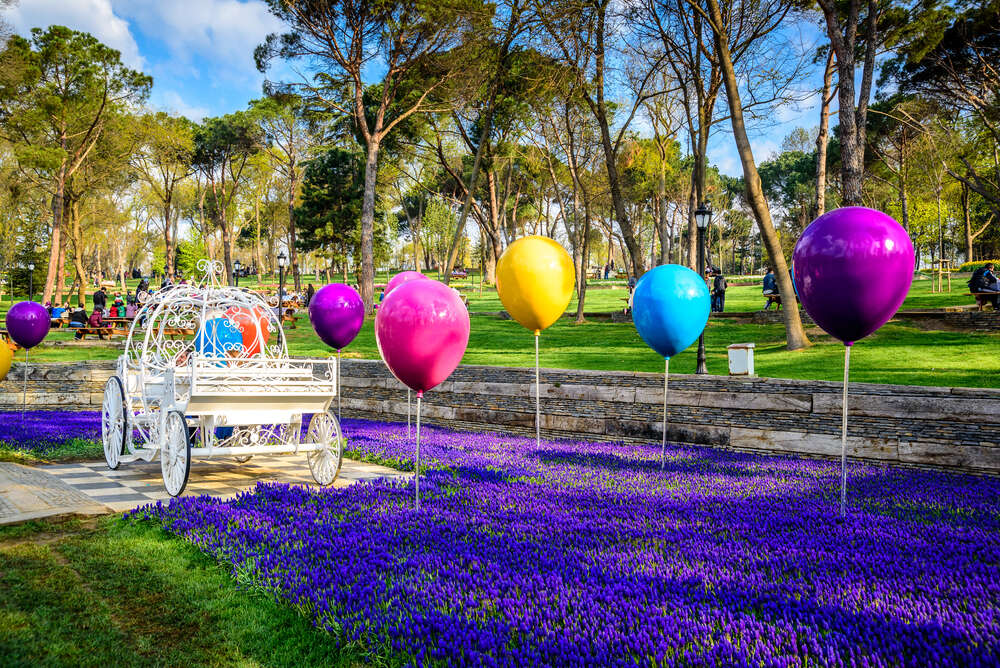 Traditionally, the Istanbul Metropolitan City Hall gives for planting tulips two symbolic places at once - The Sultanahmet Square between the Hagia Sophia Cathedral and the Blue Mosque, as well as the Sultan Park Gulhane (House of Roses). And for very good reason. The tulip, which was brought here from Persia, was so much loved by the Ottomans that the sultans put it to the coat of arms of their vast empire. The flower migrated to a modern Istanbul's emblem and became its tourist symbol. 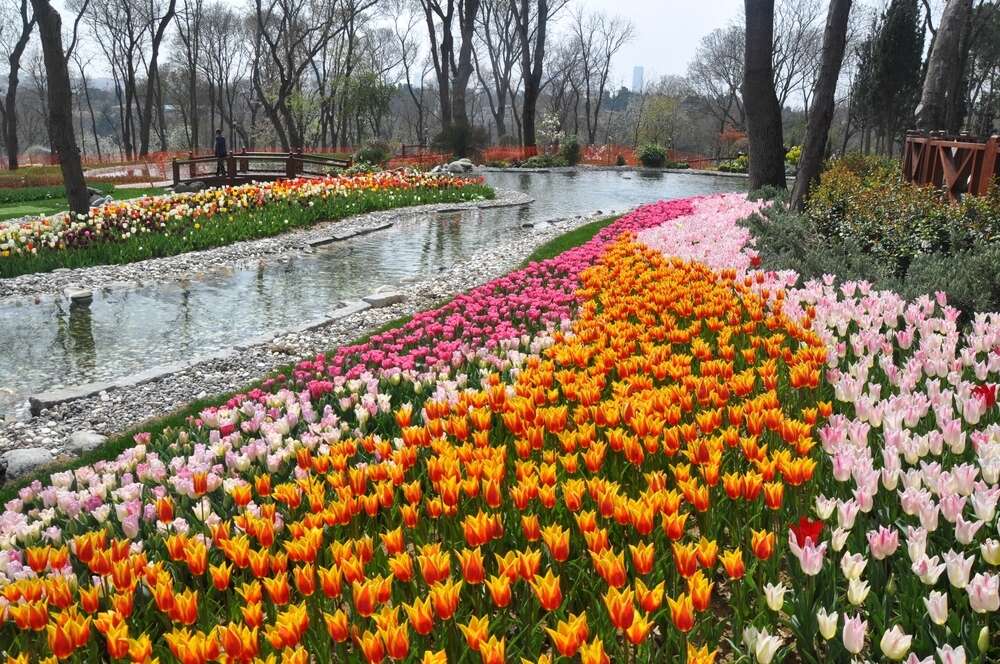 The City Hall of ancient Constantinople does everything to emphasize once again: it is here that you must go to see not only unusual varieties, but also to breathe the special aroma woven from tulips, toasting kebabs and the salty air of the Bosporus.

• Every resident or tourist is looking for his happiness, looking at tulip buds, because according to legend, happiness is hidden at the bottom of the flower.

• Breeders from all over the world come to the Festival to purchase a batch of new, rare varieties of tulips. 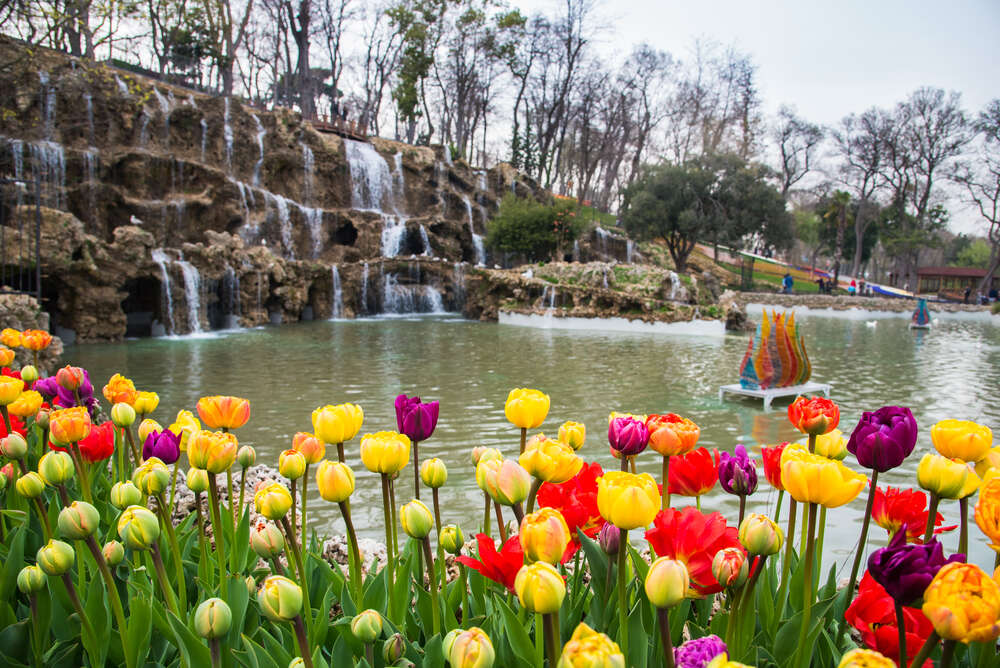 • In the Emirgan Park, 2 million 800 thousand tulips are planted, and these are 190 species. In this park, there is a beautiful lake, a waterfall, tea pavilions, grottoes, stairs and labyrinths of paths that are comfortable to walk along, admiring the beautiful flowers.

• On the eve of the holiday, people are given out tulip bulbs for free on the streets of Istanbul, so that small courtyards of houses shine with a riot of colors. 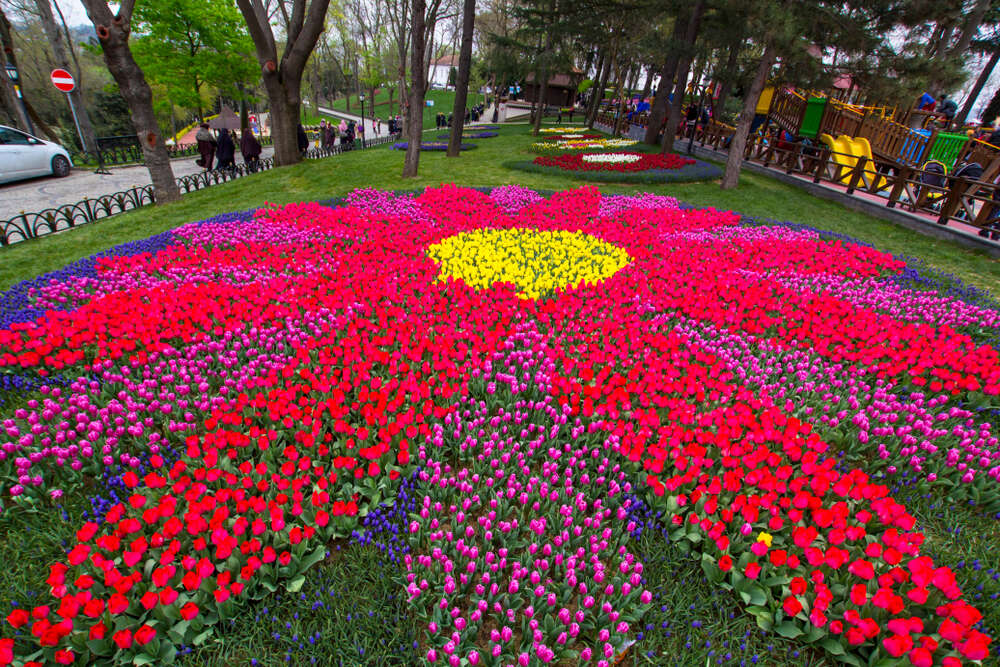 In the days, when tulips bloom, the flowerbeds of Istanbul turn into fragrant meadows. You can enjoy the reincarnation of Istanbul from the side of the Sea of Marmara and the Bosphorus, because the Topkapi Palace and Gulhane is located at Sarayburnu Cape.

But that's not all. The location of Istanbul makes it possible to cultivate almost the entire spectrum of this flower. And if massive and tall tulips are found along the Sultan's pathways in Gulhane, then  you can see the highland ones — small but elegant, fluffy and full — on Çamlıca Hill alpine meadow in the Asian part of Istanbul, a noticeable mountain with transmission towers, that hangs over Yuskudar - it is located directly across the entrance to the Golden Horn. 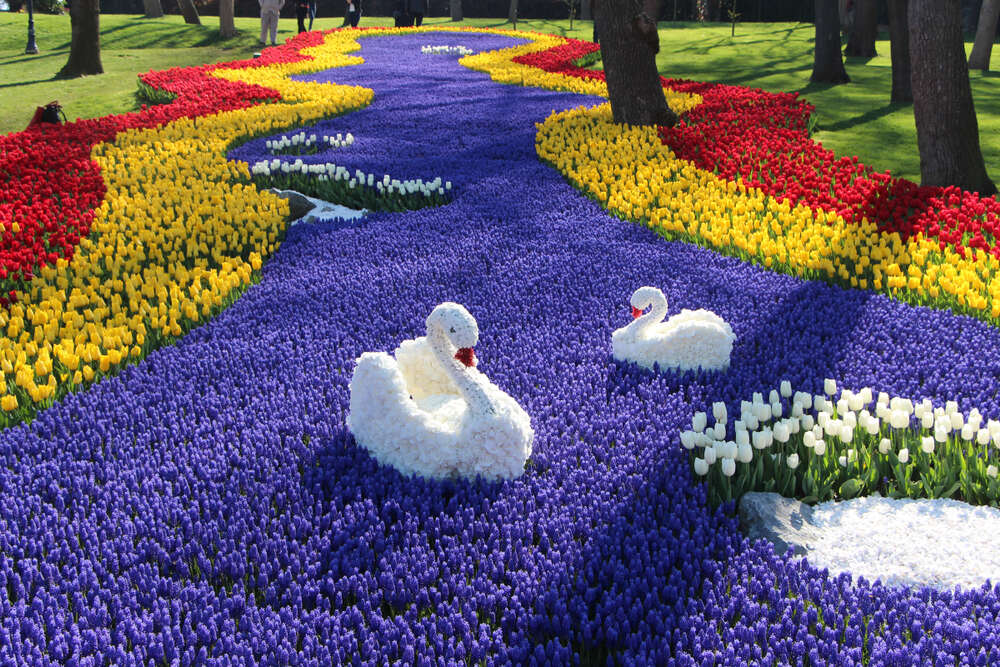 But if this is not enough for you and you really want to plunge into the sea of flowers, go here to the Emirgan Park (the European part at the Emirgan Pier). Absolutely all tulip varieties are collected here, all in the same place. The talented gardeners of Constantinople construct not just living compositions of them, but gigantic paintings. Here, a sea of tulips is not a metaphor at all. Images of the sea, lakes with swans, rainbows and fairy tales are composed from the flowers.

The main locations of the Tulip Festival in Istanbul:

Entrance to the celebration is free. 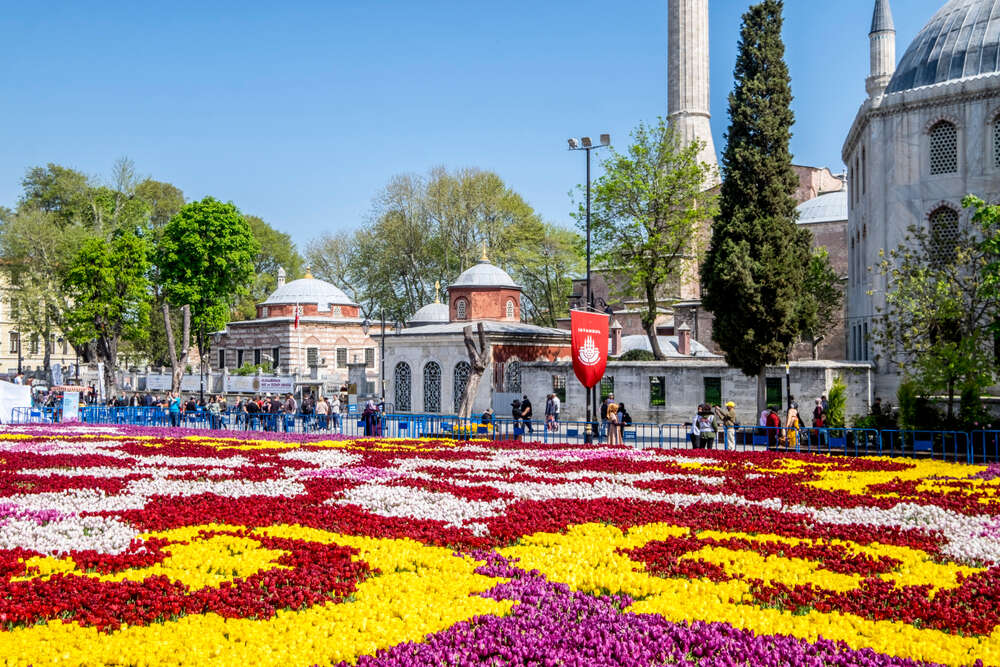 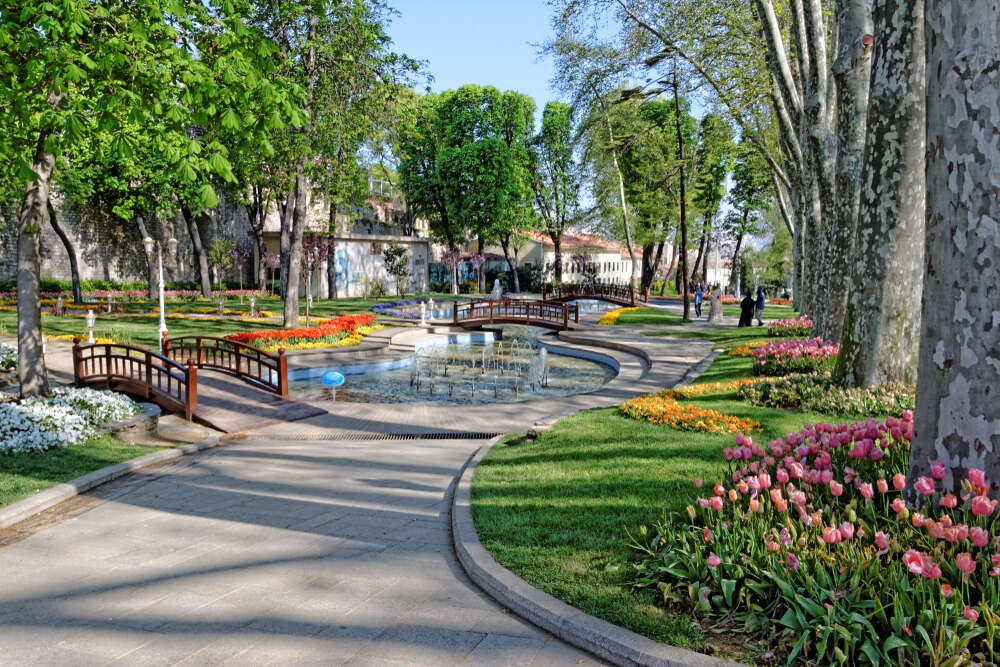 In the Asian part of Istanbul, you can enjoy the Festival in the Çamlıca Hill alpine meadow, the Beykoz Forest Park, the embankment parks over the Bosphorus - Ostğtepe, Büyükşehir, Küçüksu (which is the Imperial Ottoman summer residence), Fenerbahçe, Goztepe and Özgürlük. And also in the parks on the Princes' Islands in the Sea of Marmara. 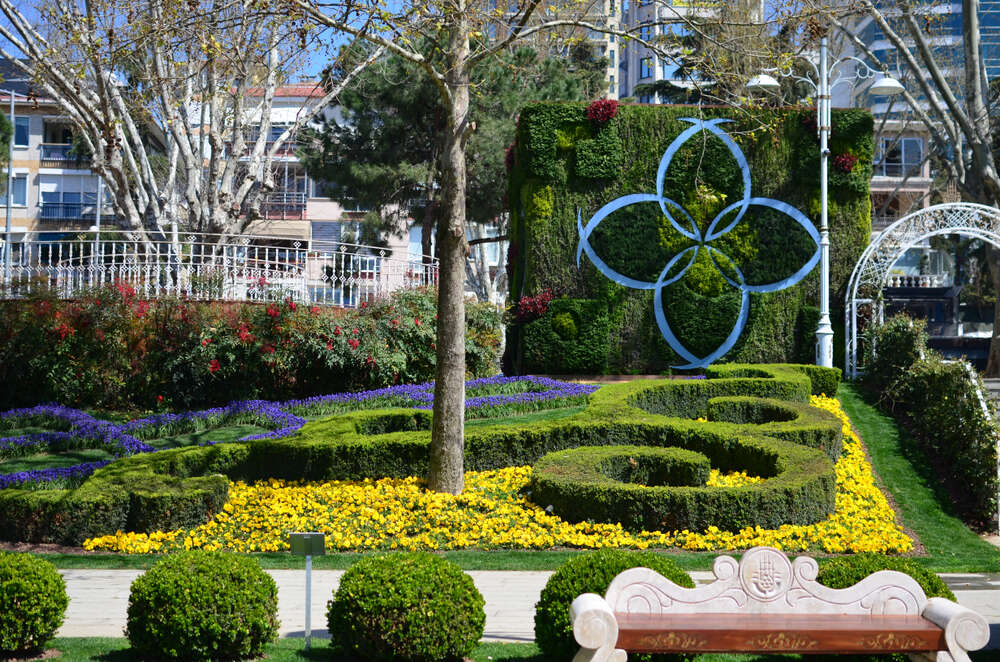 In the European part of Istanbul, tulips bloom in Atatürk Park (Florya Atatürk), near Istanbul Atatürk Airport, in Bakırköy Botanical Park, and of course, in the Emirgan Park, the main platform of the Tulip Festival. 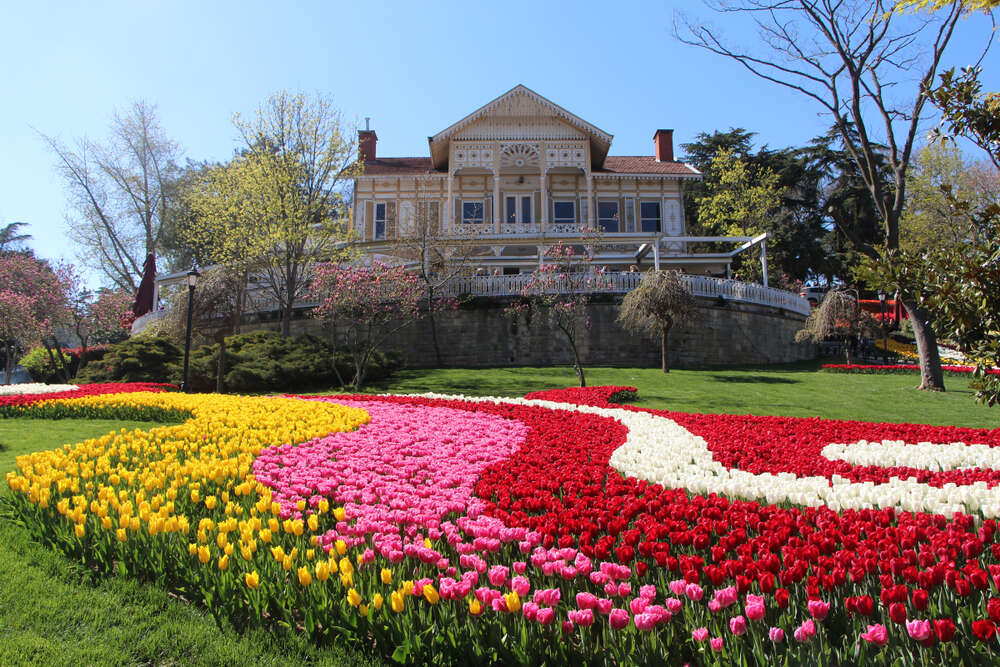 Thousands of color puzzles will remind you of the tenderness, sincerity of feelings and the beauty that surrounds us. Much can be told, but it's better to see this magic sight with your own eyes...