Cozy streets, bulb-shaped roof mills, enthusiastic tourists, the aromas of coffee and rolls - this description is more suitable for villages in northern Europe. But this is the California city of Solvang, built with love and care to preserve Danish culture. Today's Travellizy article is about the unofficial Danish capital of the Americas. 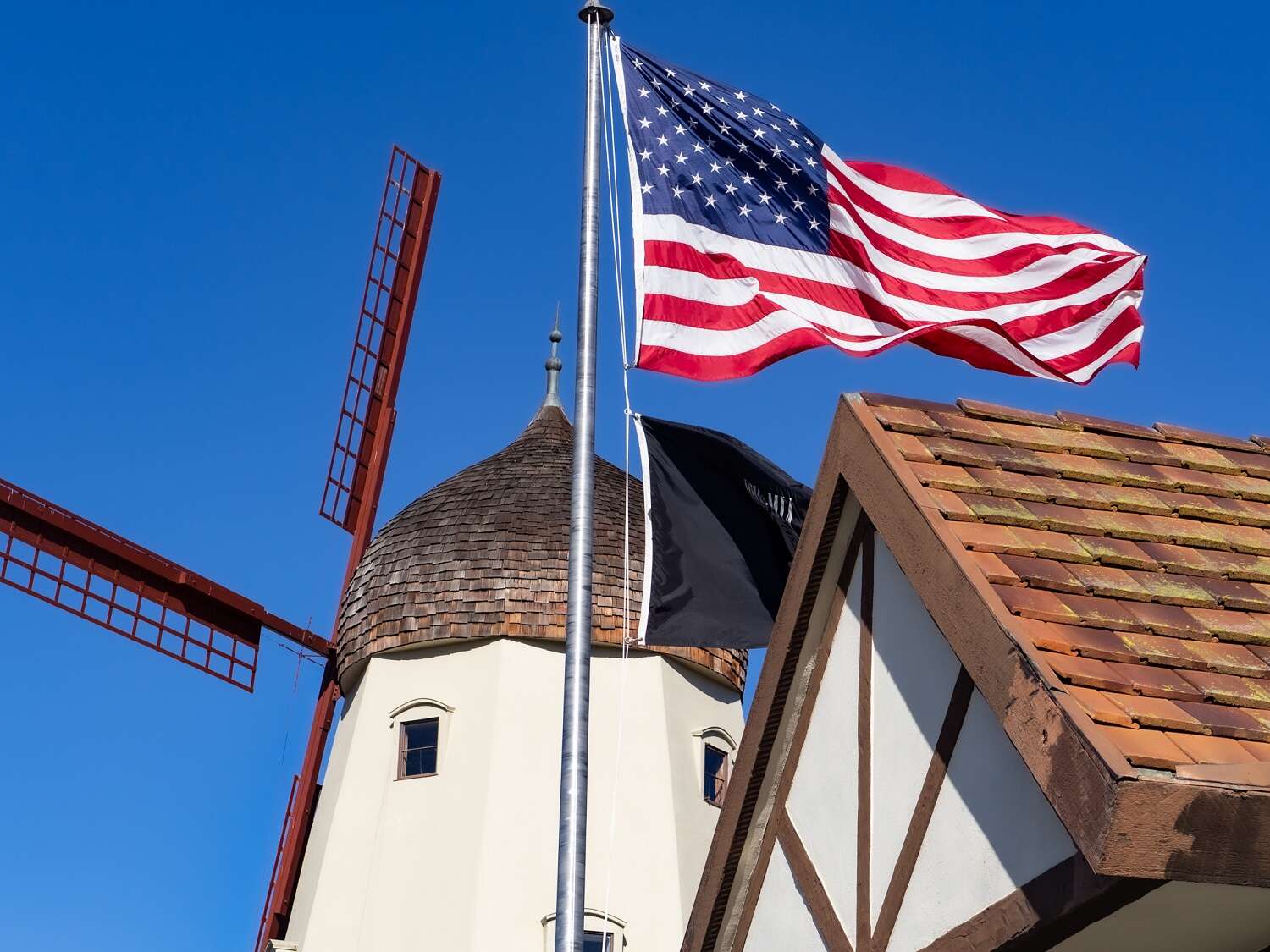 Solvang is a city in southern California, which boasts a rich North European cultural heritage transported across the ocean. At first, immigrants arrived on the East Coast of the United States, but pretty soon, they became disillusioned with the climate and moved to the West of the country. Snowless winters, warm off-season and 287 sunny days a year attracted several dozen Danish immigrant families here in the early twentieth century. After the cold and cloudy Scandinavia and the East coast, the warm slopes of the Santa Ines valley became native to hardworking Danes very quickly. The population of Solvang is less than 5500 people, but about a million tourists come here annually.

Danish architecture with an American approach

Solvang was founded in 1911, but did not immediately take on an appearance that attracted many tourists to these picturesque lands. At first, the settlement was built in the usual style for the American West, but already in the 30s. The twentieth century, citizens began to stylize their homes in a characteristic Scandinavian spirit. 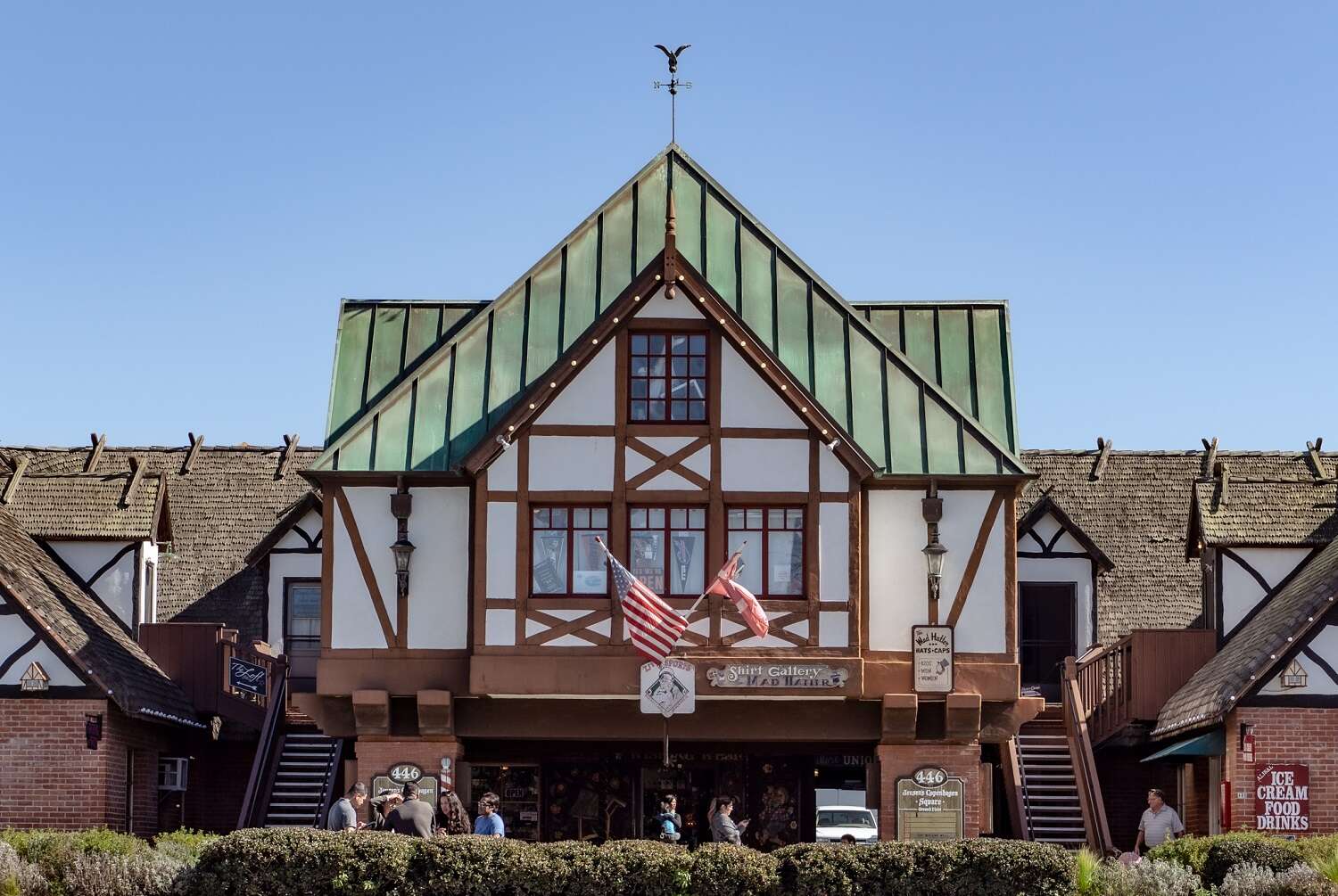 Wood is a material that is very often used in the design of traditional Danish houses. Not all residents of Solvang could afford to decorate the facades of their dwellings with the characteristic beams of a tree, so they got out of position by simply drawing stripes on the walls. Such a trick adorns the street, but does not require additional expenses. Also with stylized roofs: some of them look like tiled, but if you look closely, you will see that modern materials are used for the roof. 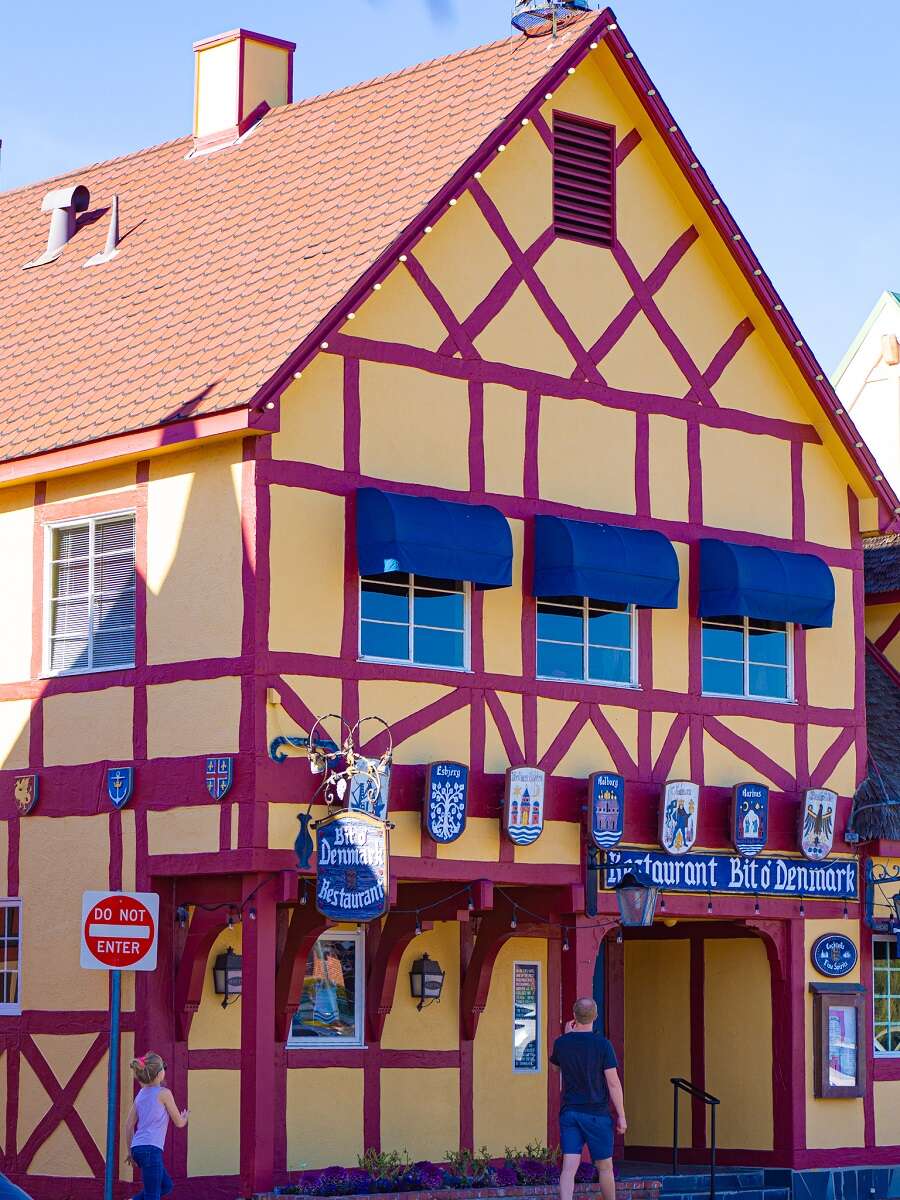 The streets of Solvang are so charming with their cosiness, so they set up for a relaxed vacation. Fans of quiet shopping come here to walk around small shops. But those who like huge shopping centers with world-famous brands will be disappointed: there are no such stores in the city. 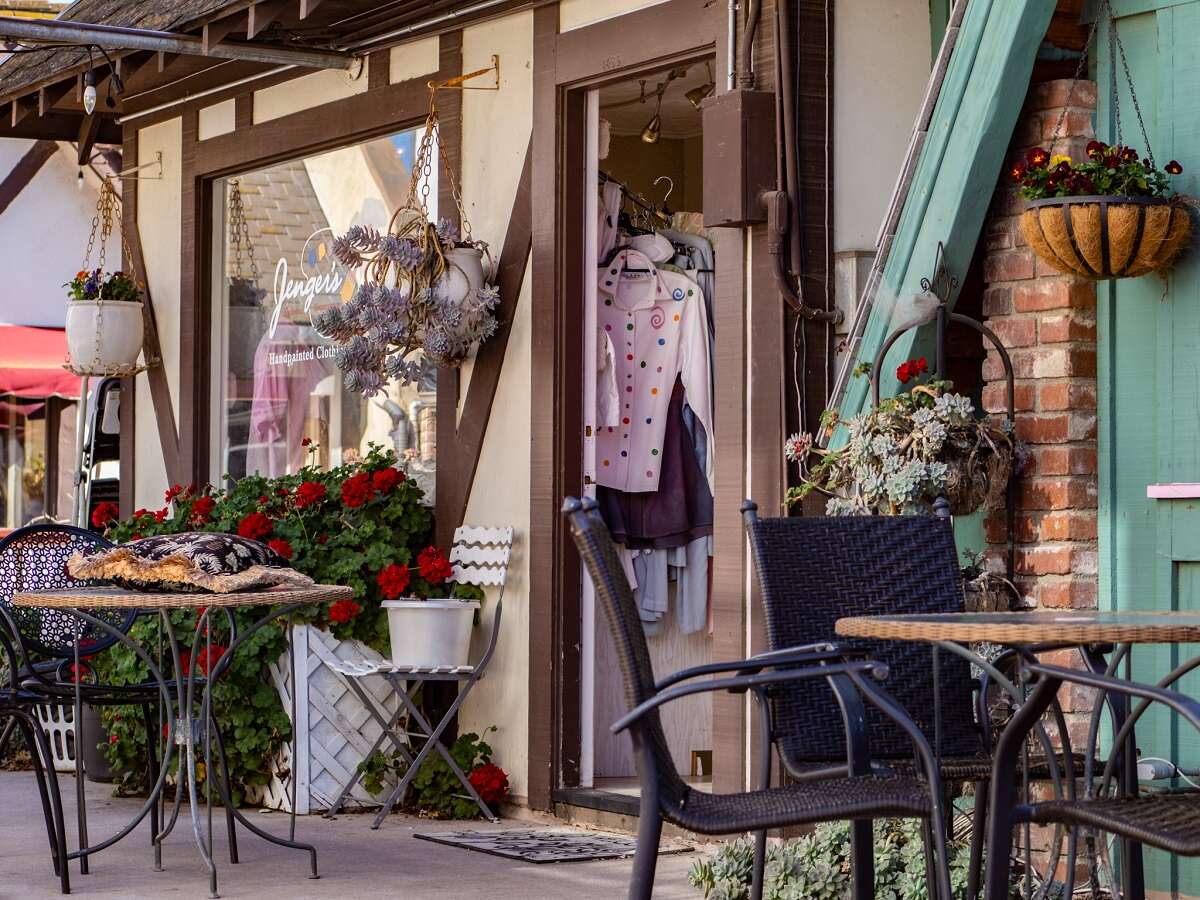 Those who enjoy an active holiday will enjoy renting bicycles through the hills, or choose a walk along the hiking trails. And if you want to give rest to your feet, you can buy a ticket for a trip on a wooden horse-drawn cart. Such entertainment is always a delight for children. 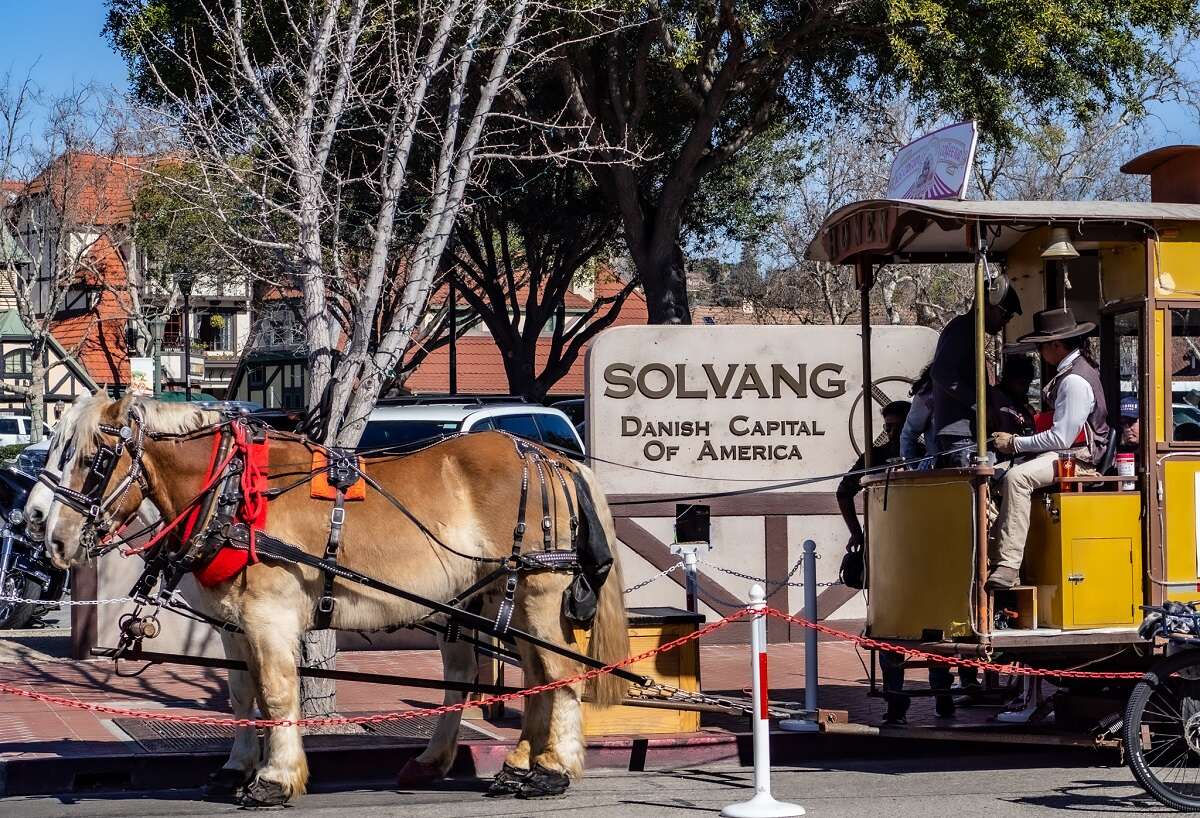 Due to the fact that the third generation of the city’s residents already works together on the image of Solvang, its streets look as if from pictures of brochures. The most recognizable and popular symbol of the region is mills. 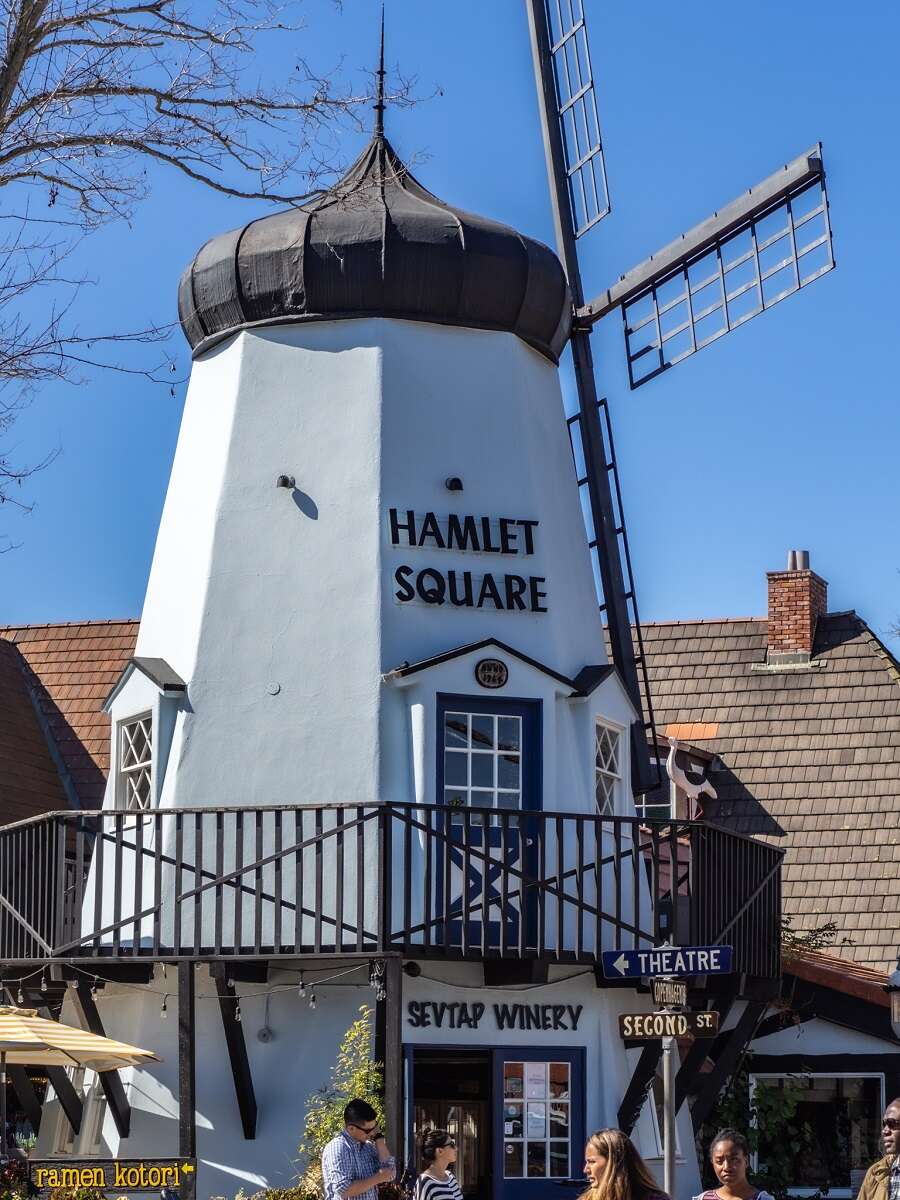 Signboards emphasize the fashionable trend of the bearded Viking: 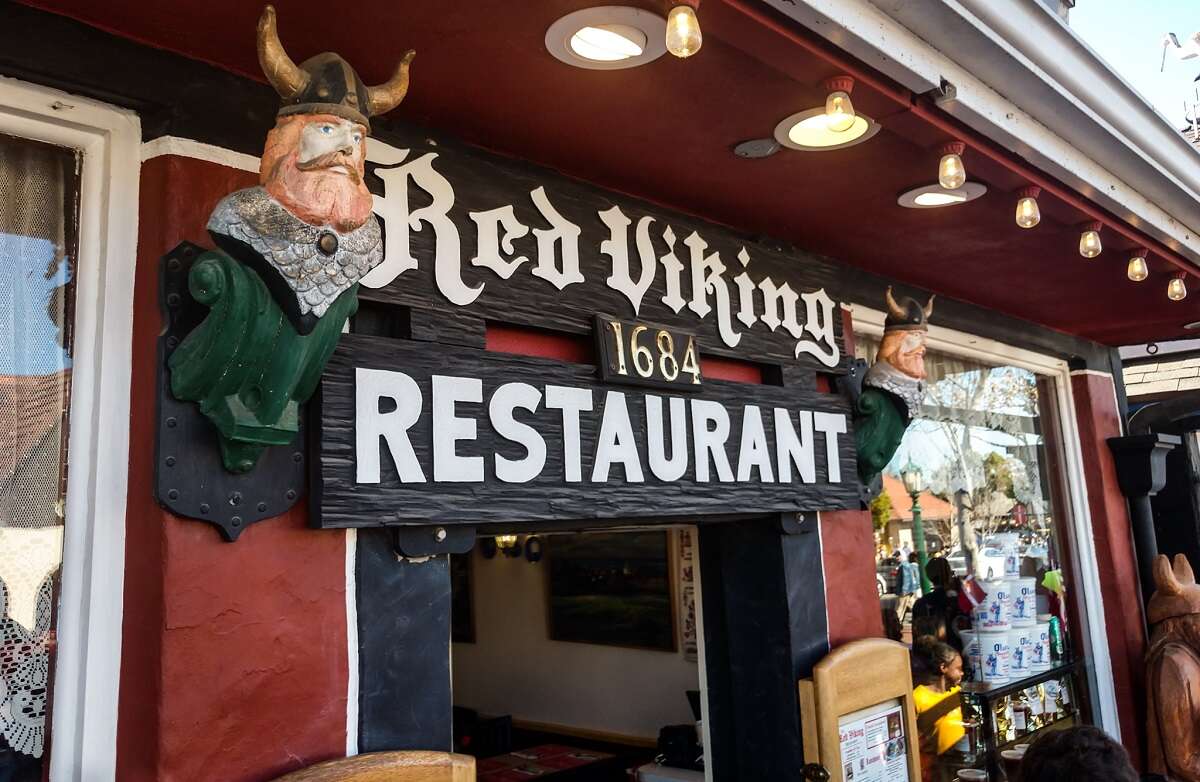 It turns out, that even the publishing house can be in the Viking style. 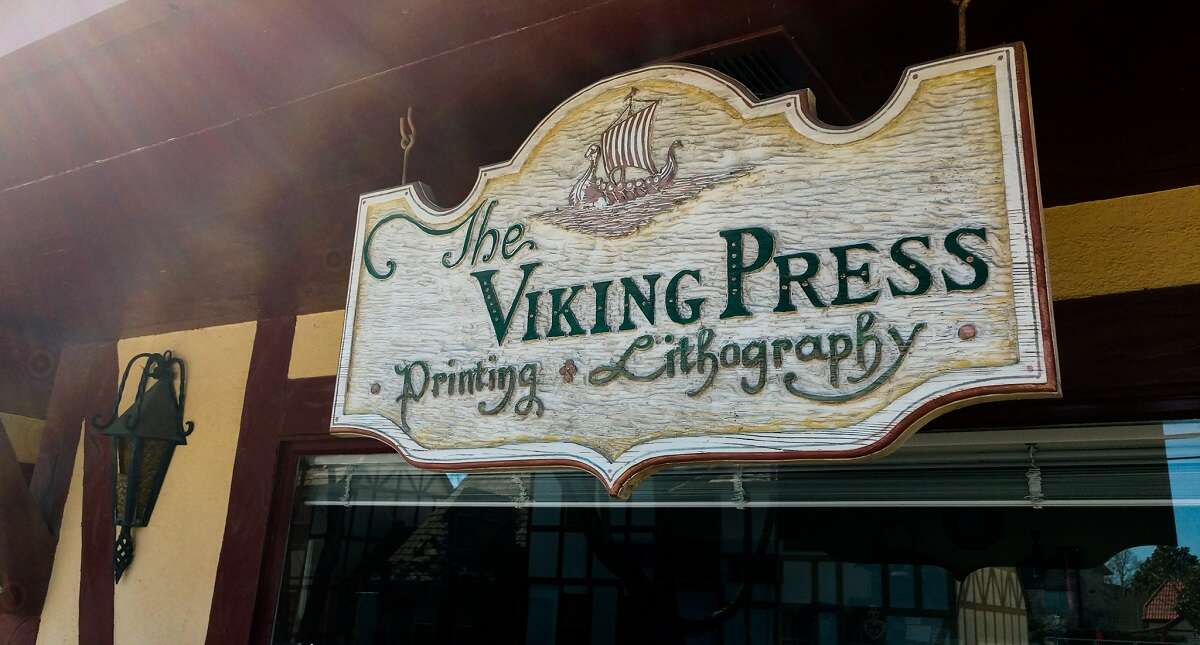 The city is very clean, there are many colors and flags of the Kingdom of Denmark and the United States on the streets: 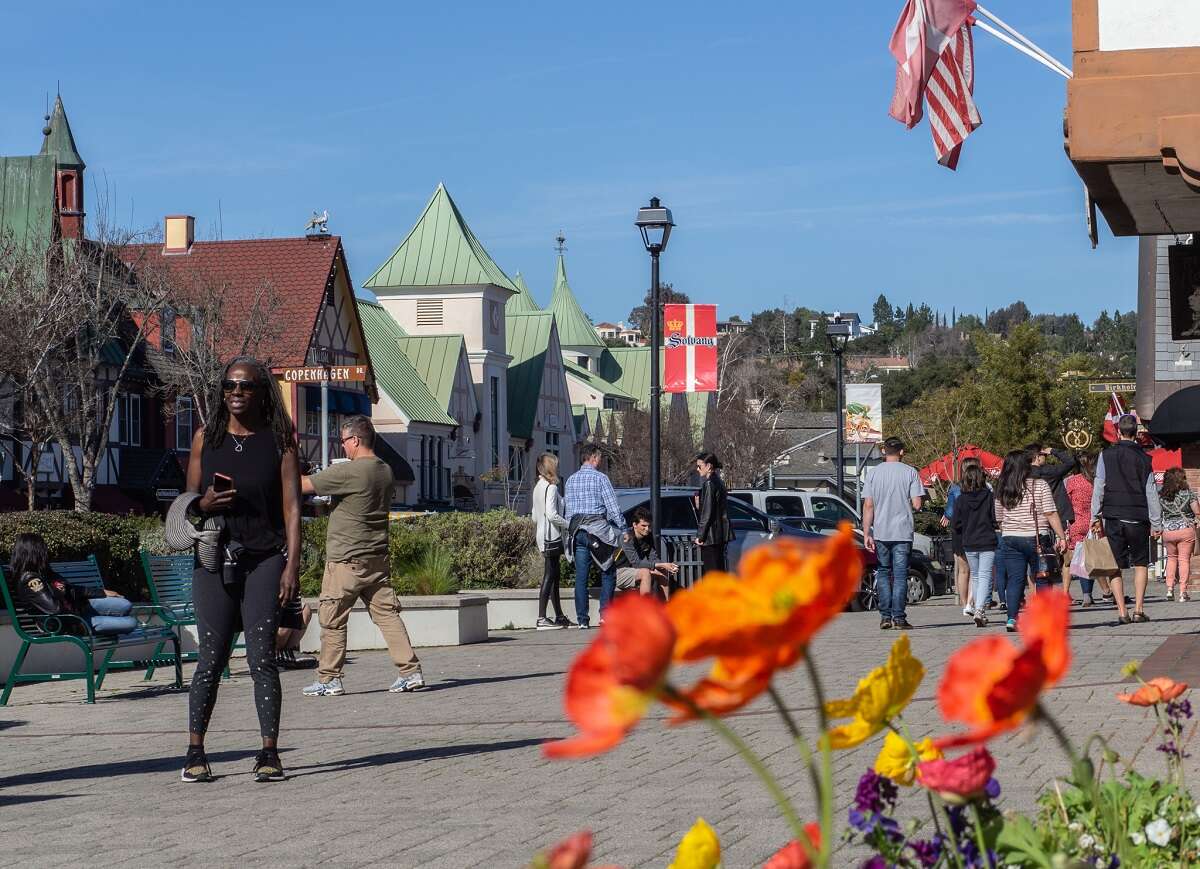 Neat buildings look good both in photographs and in life. 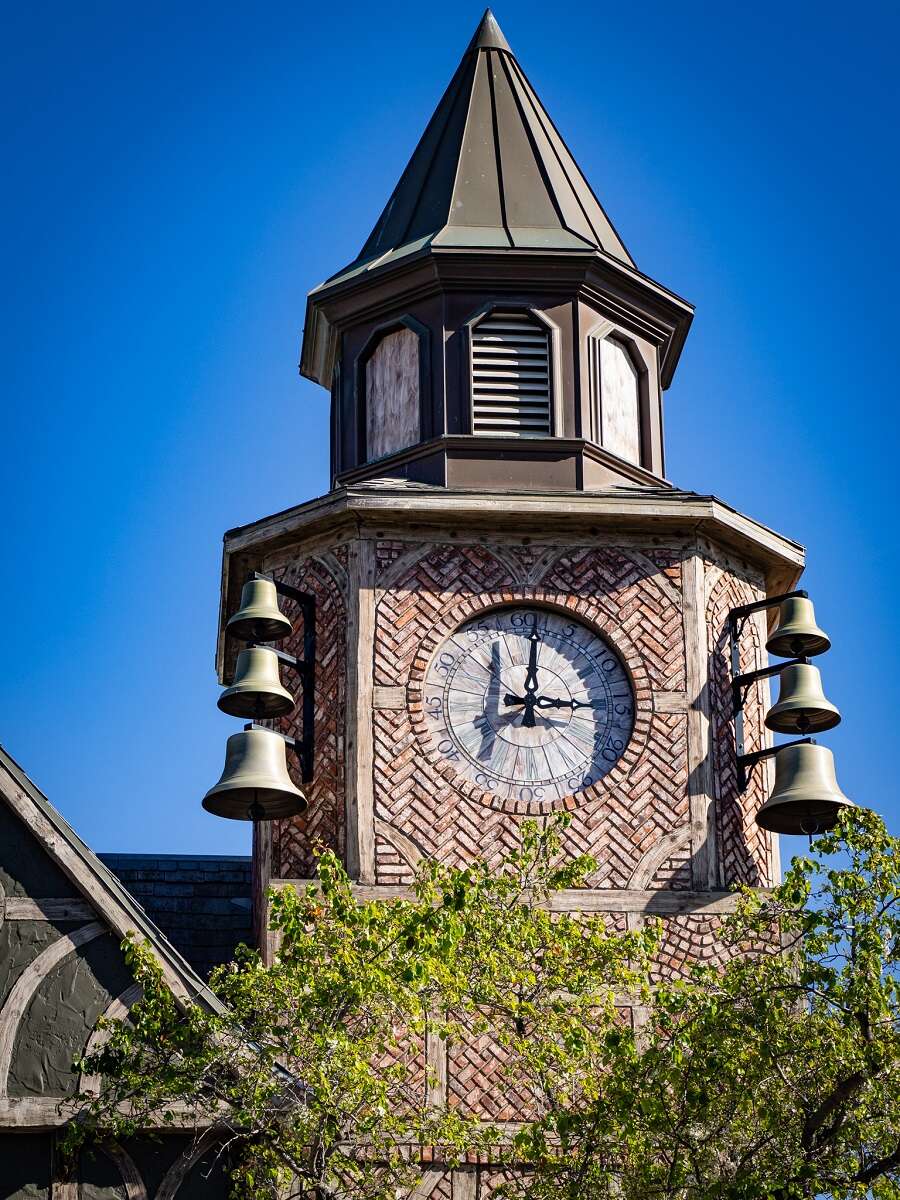 There are several museums in the city. One of them is the Vintage Motorcycle Museum. Motorcycle enthusiasts will spend a lot of time here looking at the chrome-plated iron horses: 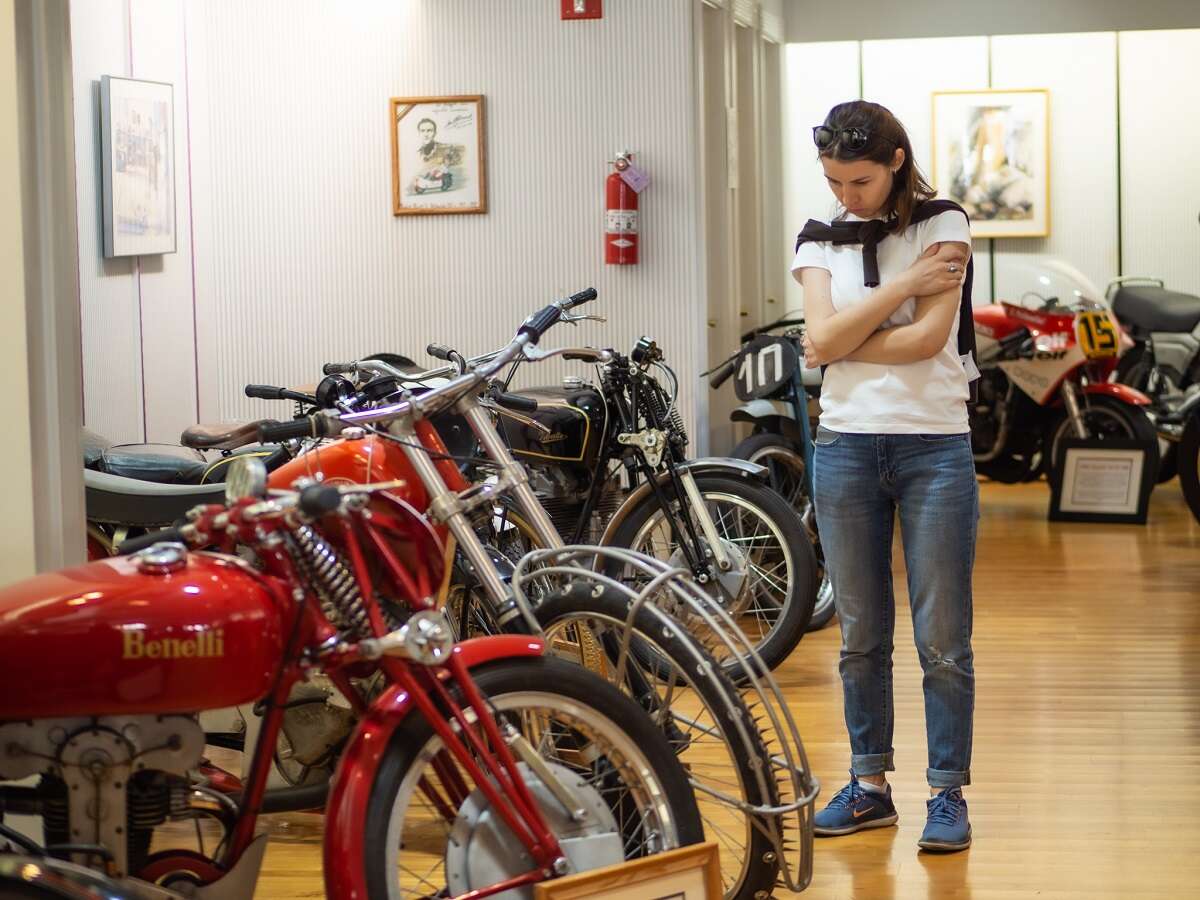 Those who are fascinated by the tales of the famous Danish writer Hans Christian Andersen will be happy to visit a small museum dedicated to his work. The city even has its own statue of the Little Mermaid: it adorns a fountain at the intersection of Mission Drive and Alice Road. Skipping it is quite simple: the size of the statue is half the size of the original set in the Gulf of Copenhagen. 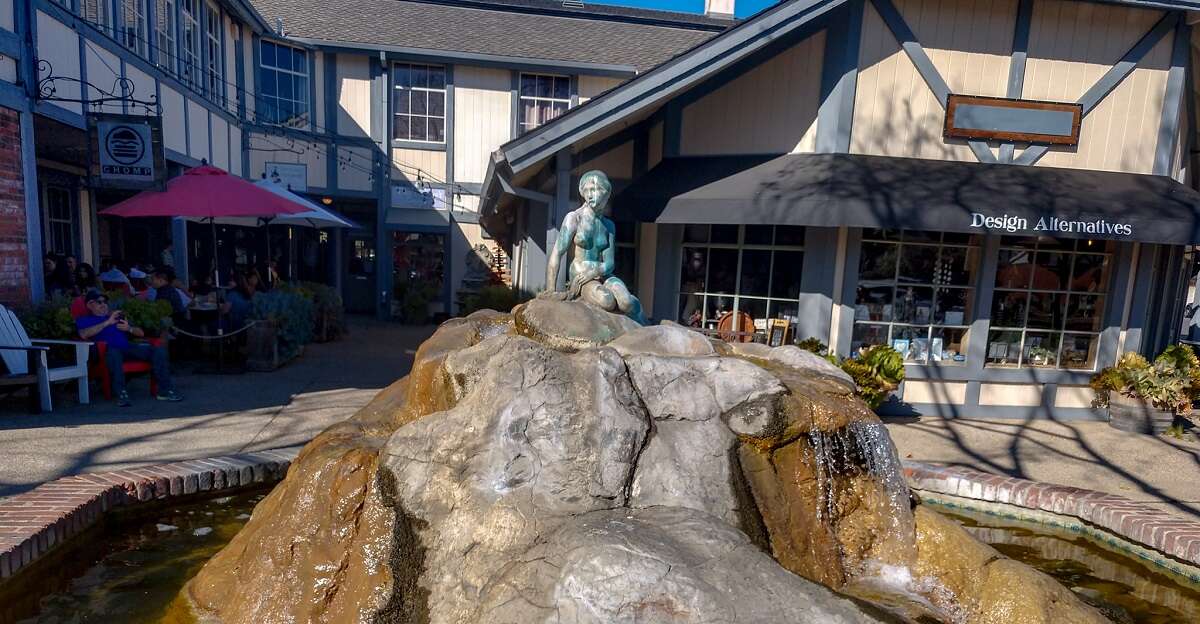 But it is not only spiritual food that welcomes the guests of Solvang! If you like juicy and spicy sausages, then restaurants, cafes and bars will be glad to see you. There are many options in the city, how and where to eat for a reasonable price: about 30 restaurants are at guests' disposal! It is not surprising that you may be confused with such a choice. Therefore, hundreds of hungry tourists choose a restaurant with a name that speaks for itself: “Copenhagen Sausage Garden” at 1660 Copenhagen Drive.

Fresh meat goes well with beer, which is plentiful for every taste. 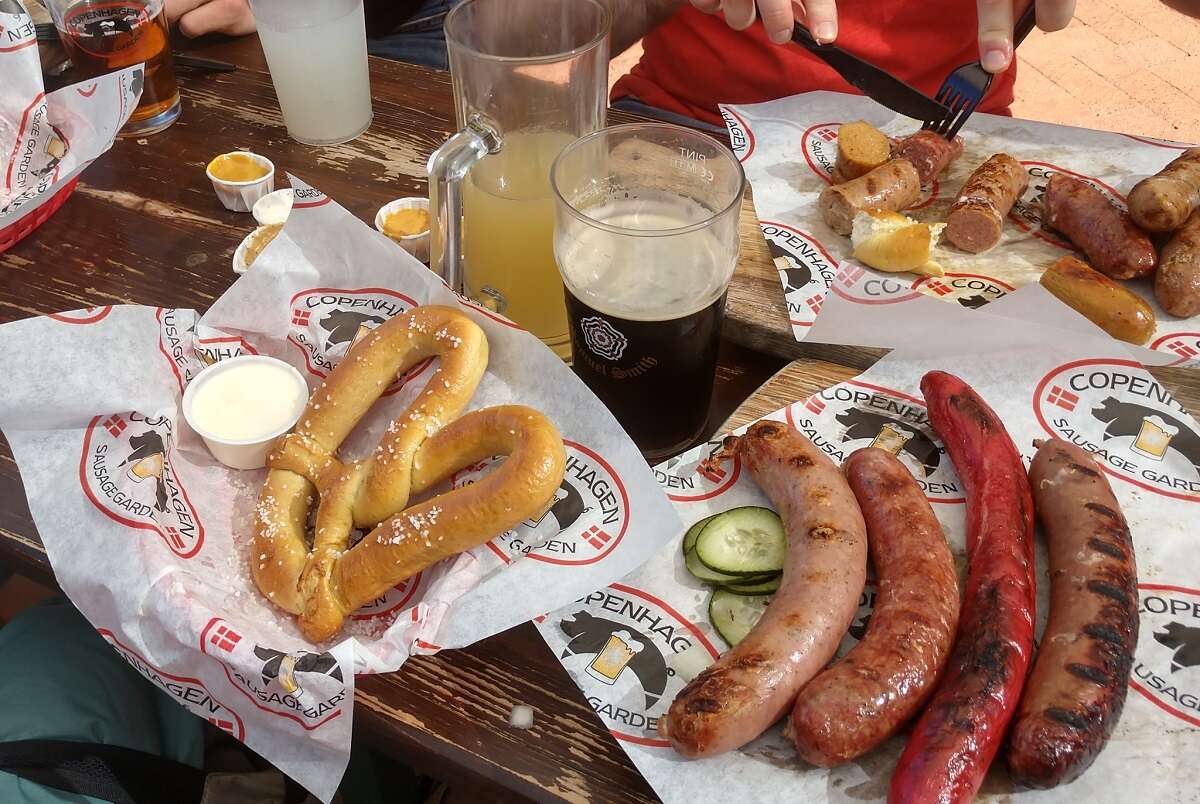 After a hearty and nutritious dinner, you can enjoy pastries: Danish pastries are famous all over the world. Snail rolls with cinnamon or raisins, braided from puff pastry, are the Danish sweets traditionally eaten with coffee. 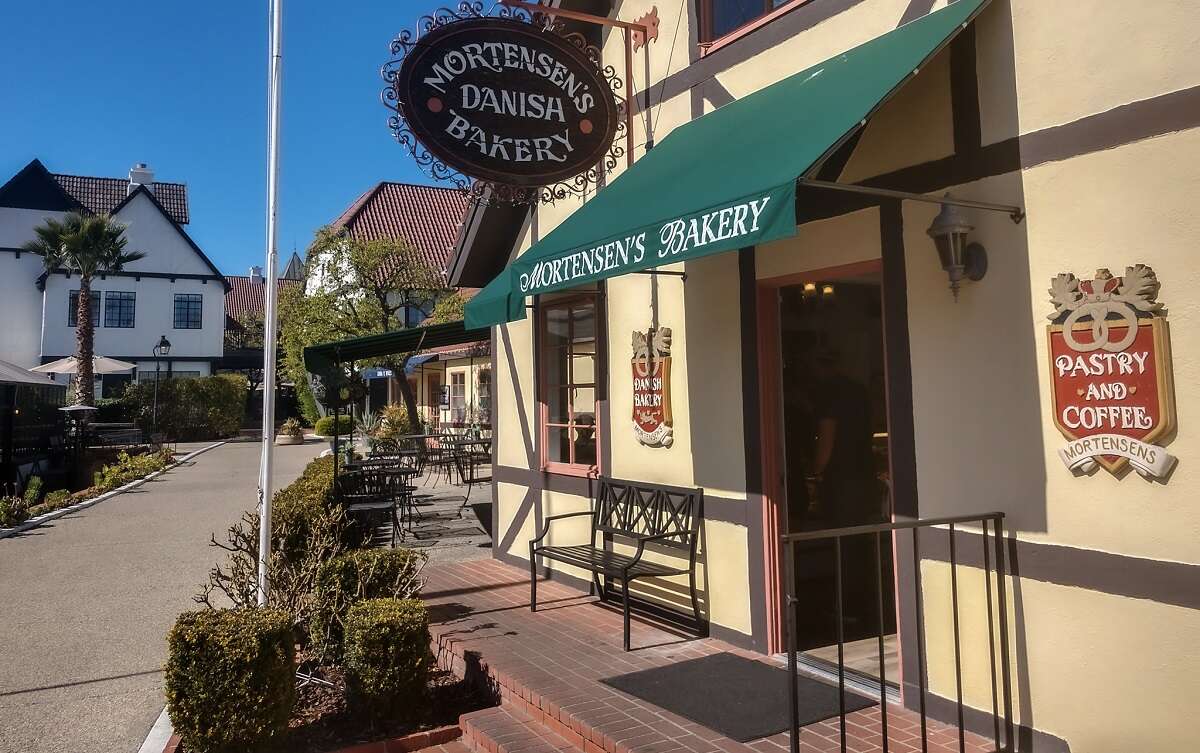 Arriving in Solvang, do not waste your time looking for Starbucks, Peet’s Coffee, or other chain coffee shops and fast food establishments. The city does not allow the opening of McDonalds and similar food services, even if they are ready to make a design in the Danish style. Thus, the community helps to maintain a unique atmosphere, and city guests get a unique gastronomic experience.

A cheerful mood is set for tired tourists by local coffee houses, each of which tries to surprise sophisticated coffee lovers. Rare varieties of coffee, home-made roasting, fashionable brewing methods: make sure to have a fragrant drink here, taking your time and enjoying the moment. If you do not know what nitro cold-brew or pour over is, the barista will enthusiastically tell you about the intricacies of cooking. 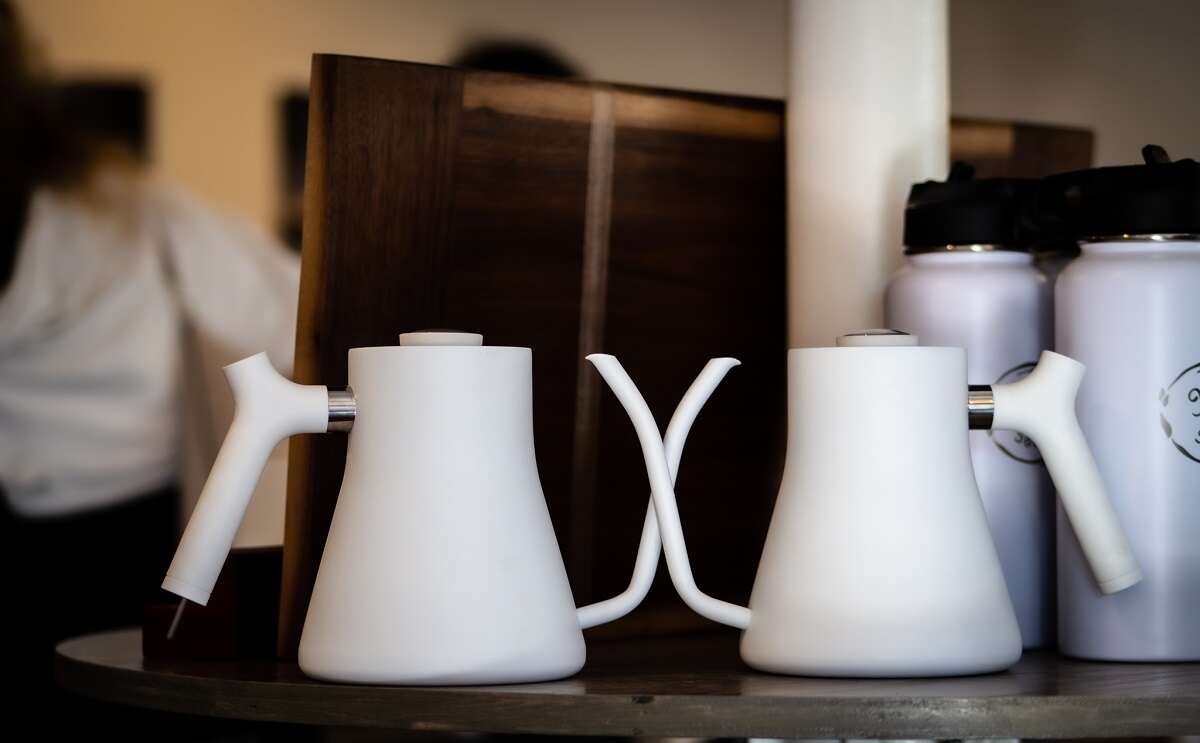 On public signs, an attentive traveler will notice signs of royal regalia, and this is for a reason. In 2011, Solvang solemnly celebrated the centenary of the city, and Prince Consort Henrik, husband of Queen Margrethe, became the guest of honor. Prior to this, members of the Royal Family paid official visits to Solvang three times: in 1939, 1960, 1976. 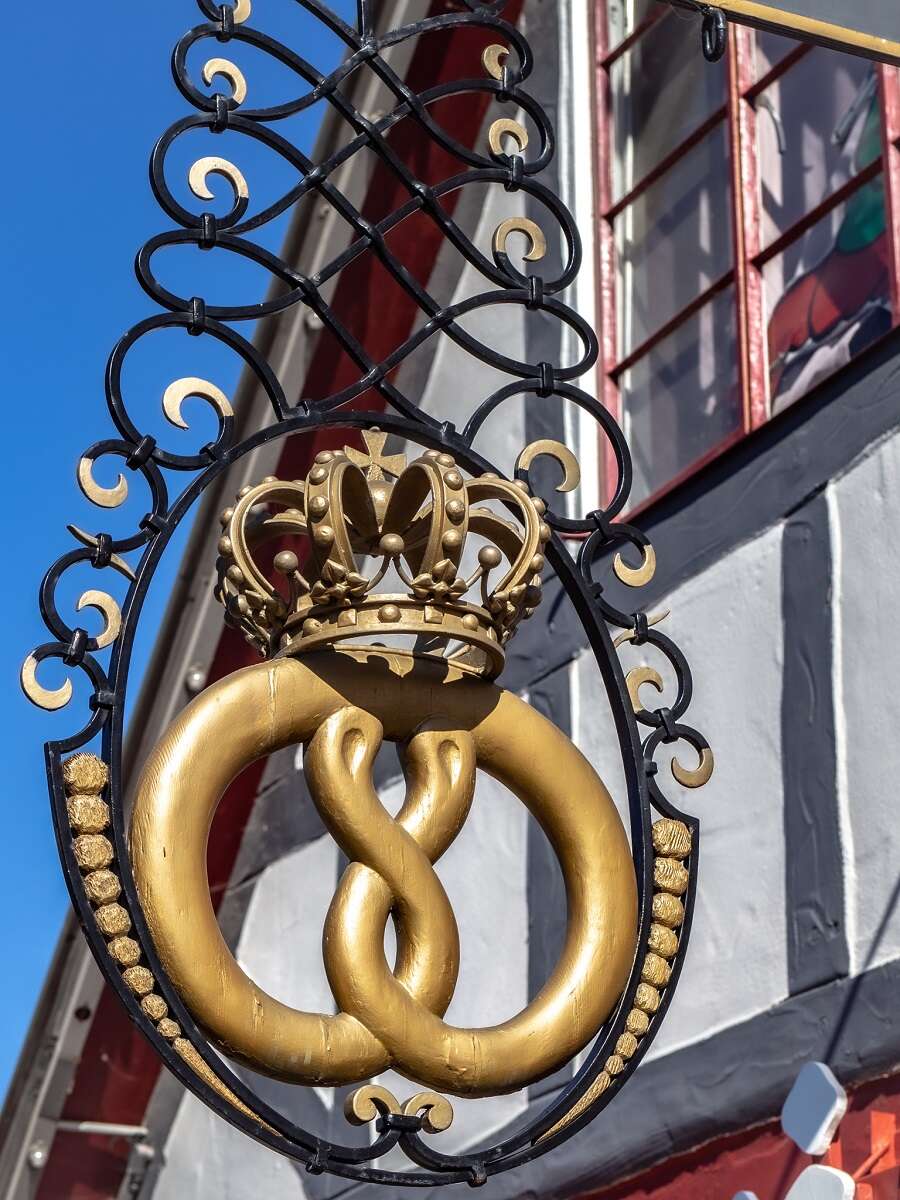 If you like good wine no less than leisurely walks in picturesque places, then a trip to Solvang will become your Mecca. The best wines of the Santa Inez Valley are at your service. But do not hope that you can taste at least a tenth of the local wines during a short trip: there are more than 120 wineries and beautiful vineyards in the valley! 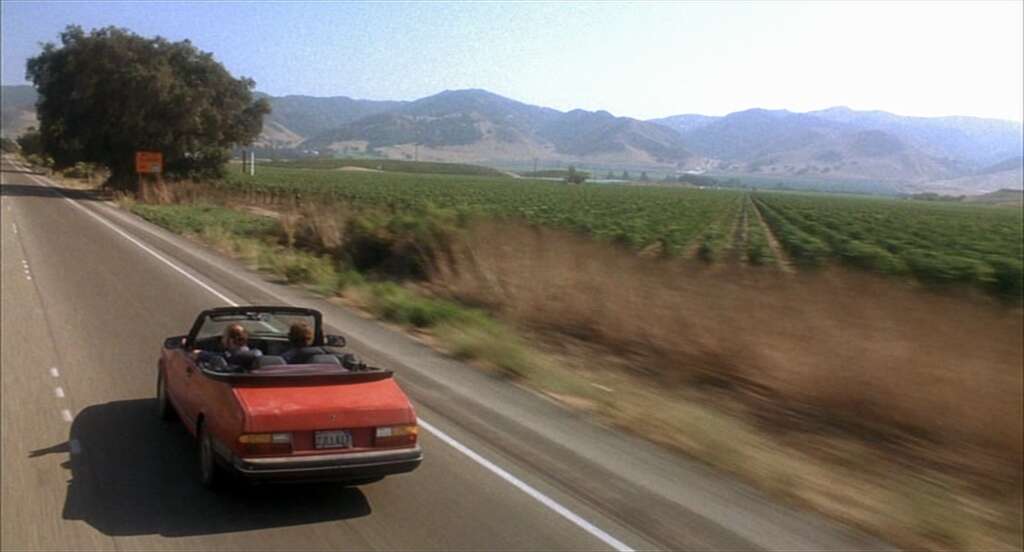 A scene from the movie “Sideways”

To get the most pleasant experience from wine tastings, before a trip to Solvang, watch the movie “Sideways”. The film premiered in the fall of 2004. The film has received numerous awards, including an Oscar and two Golden Globes.

A lyrical comedy intertwined with a road movie tells the story of two middle-aged men and women whom they meet in a week-long wine tasting adventure. Filming was carried out in these places, and although 16 years have passed since the film was released, thousands of tourists are still inspired for travel by it. The wineries of the hospitable region, sincerely shown in the film, were so loved by the audience that the fans made a special online Google map, which marked the location of the shoot. Therefore, if you consider yourself a true connoisseur of wine, add some wonderful locations to your visit plan.

You can watch the trailer by clicking on the link.

Solvang is a popular weekend getaway for Los Angeles residents. The distance between cities is less than 200 km, so having left for it in the morning, you can enjoy the Danish atmosphere and go on the return trip in the evening.

A visit to Solvang can be combined with a beach holiday: the city is located about halfway between the famous beaches of Santa Barbara and the resort town of Pismo Beach. This city is known for beaches, a colony of monarch butterflies, and wineries. 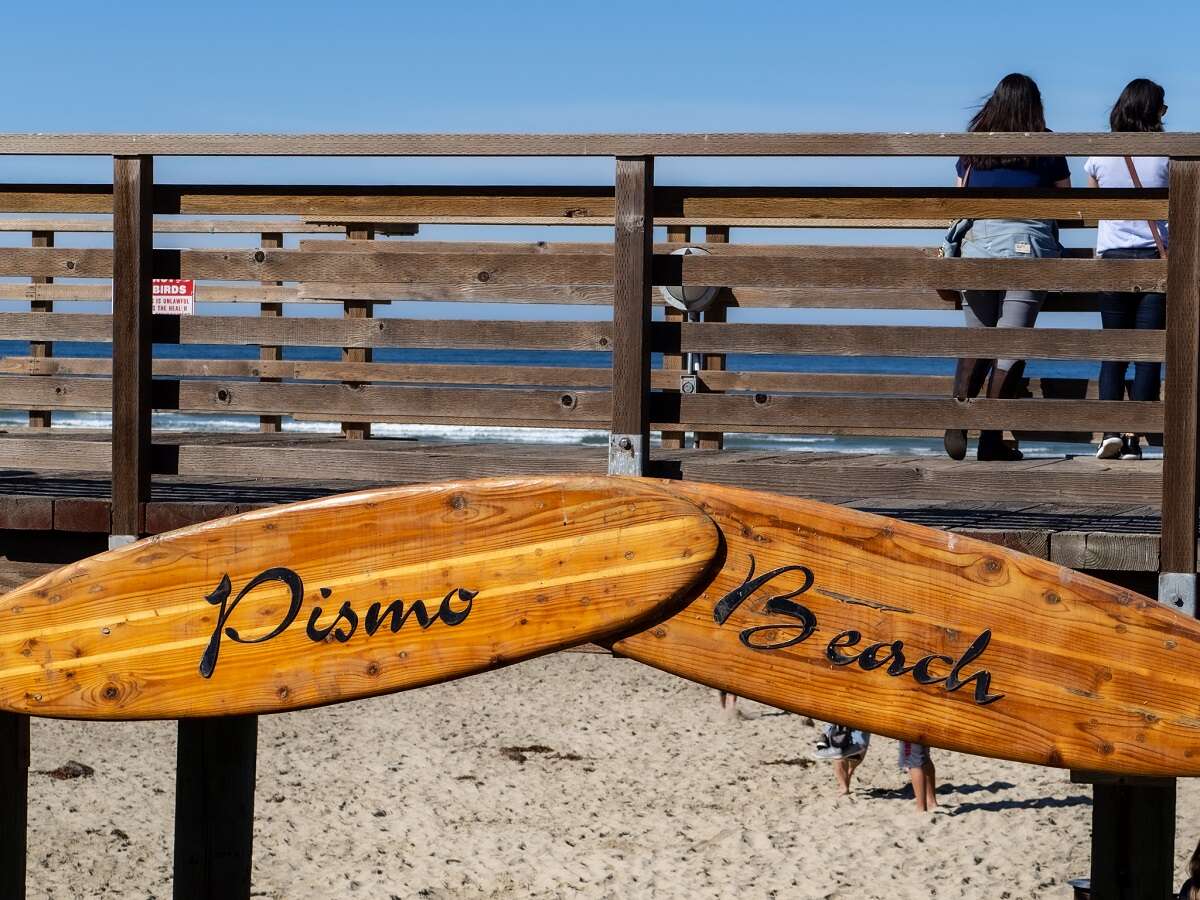 Unlike Solvang, the architecture and lifestyle here are fully consistent with the standards of the West American resort city. The wide pier is a special attraction of the city: the length of the structure is 365 meters. Unlike the piers of Santa Cruz or Santa Monica, there are no stalls or restaurants. Nothing distracts passers-by from walking and enjoying the cool ocean wind. 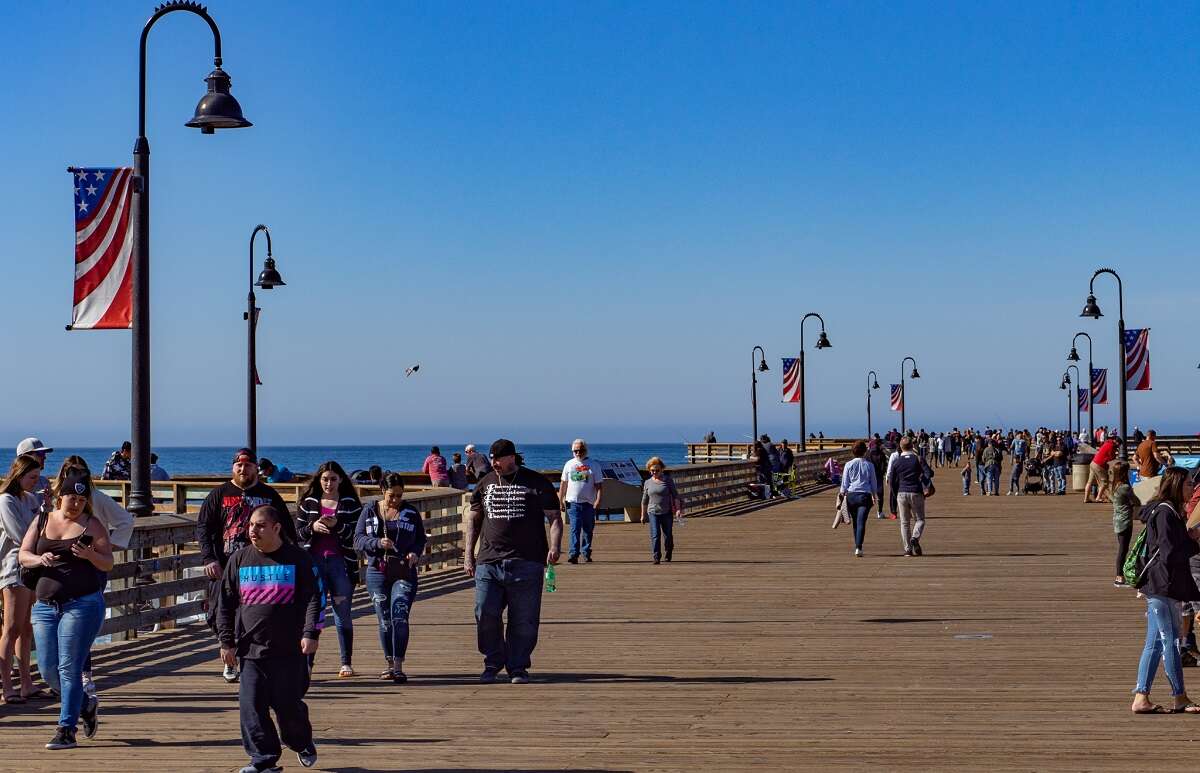 Fishermen make themselves comfortable, enjoying their hobby and a view of the city: 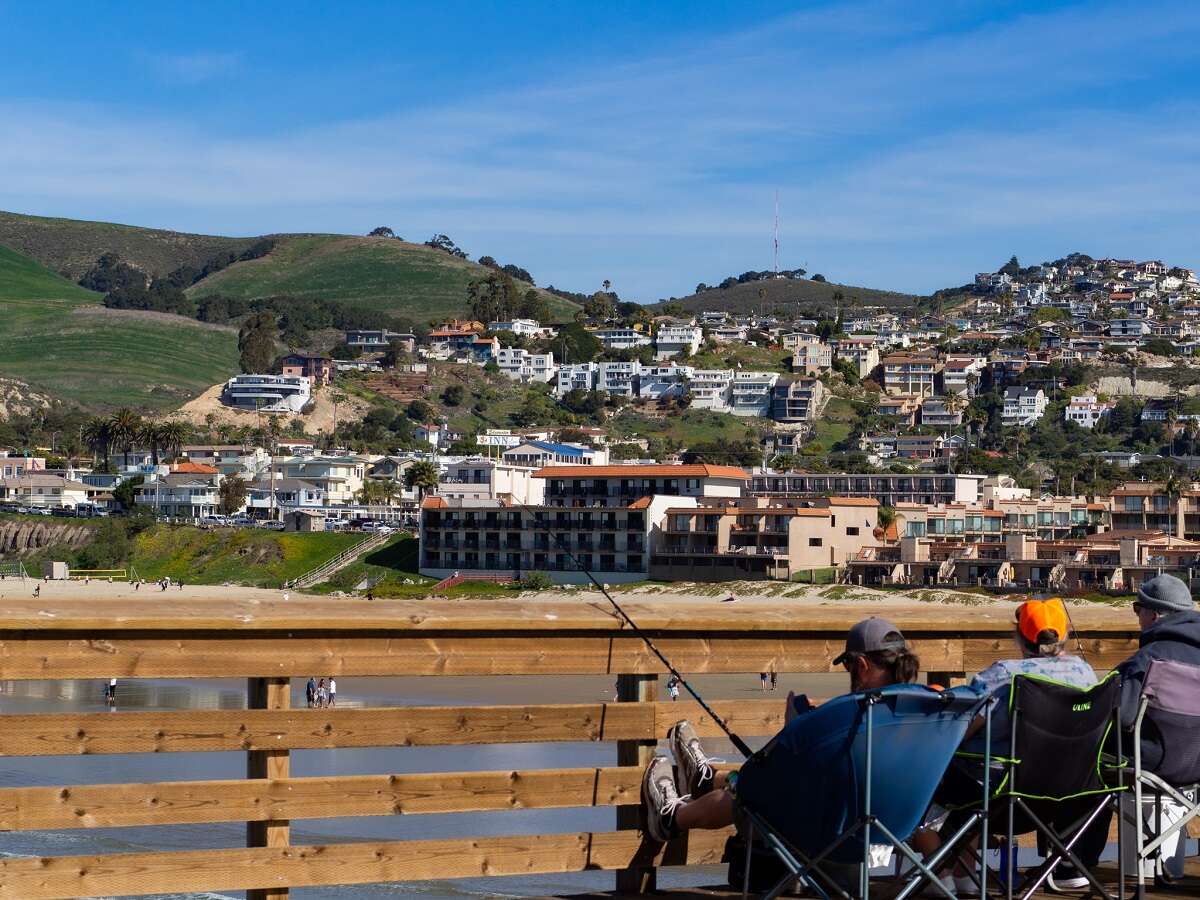 If you plan to visit California on September days, make sure to check the timetable on Solvang's official website at https://www.solvangusa.com/. At this time, Solvang celebrates the days of Denmark, holds many cultural events, concerts, exhibitions.

We hope that our readers will be able to experience the amazing atmosphere of the city, where Danish and American roots are forever intertwined. 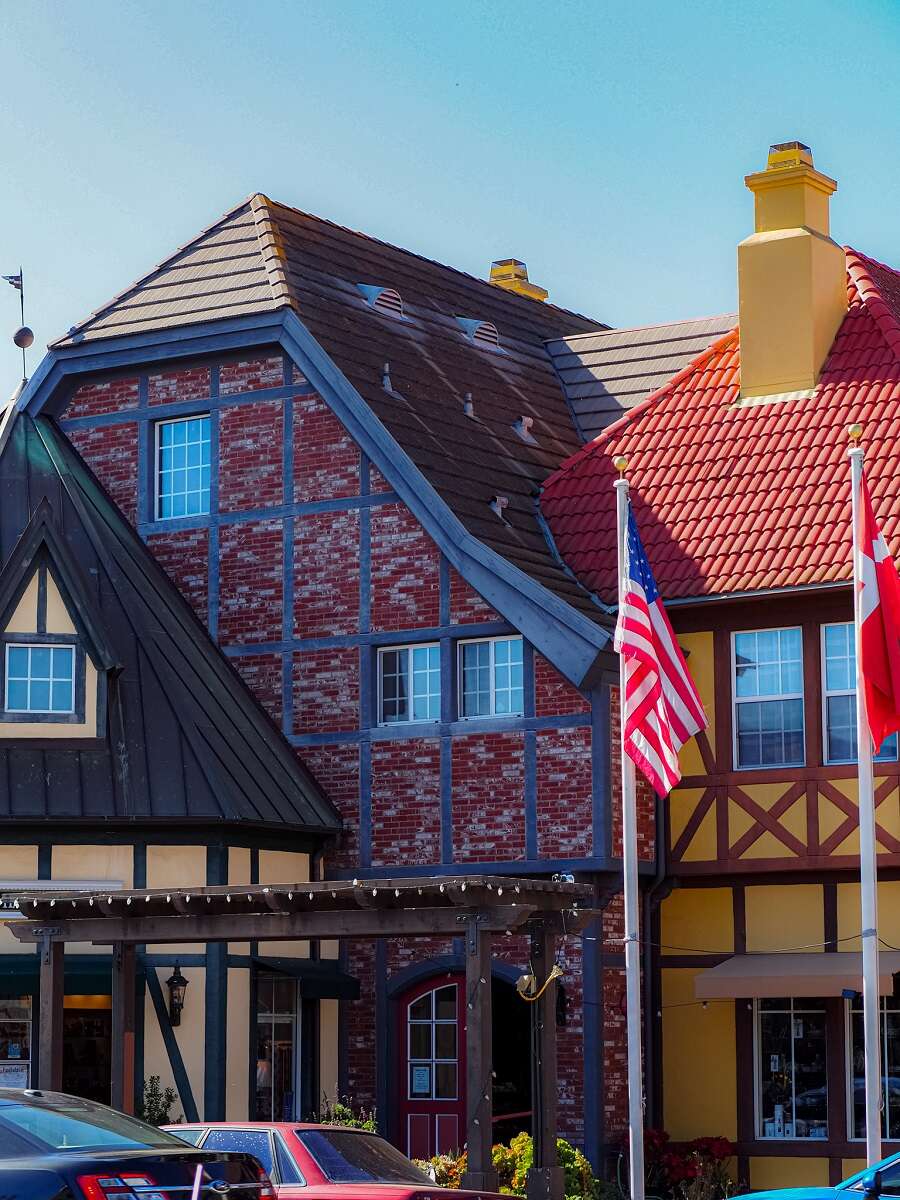 Our experienced Travellizy Team will always help you plan your trip in advance!