Safe haven, or my plans in Amsterdam

Amsterdam is a fairytale city, a city of tulips and a city of canals. On the streets, you immediately breathe in the air of a relaxed atmosphere. Everywhere, old townships coexist with new corners. Quiet streets only emphasize bright neon squares. 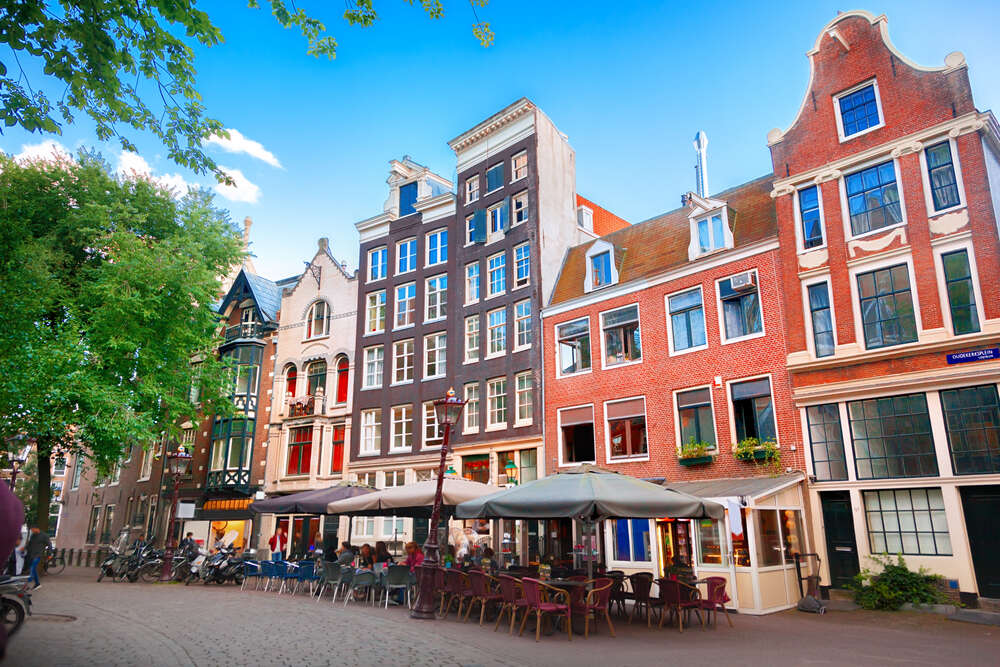 But how much can you learn about it by going on a strictly regulated sightseeing tour? Travellizy Team will tell you about secret colorful spots that tour operators rarely tell about.

Capital of the Netherlands

Despite the fact that Amsterdam is the capital of the Netherlands, it is very compact. It can be easily explored by walking and/or riding a bike. The inhabitants of the city call it Mokum, which means «safe haven». It is a version of New York's Big Apple. At the same time, Amsterdam is the busiest crossroads in the world, a center of culture, music and art. 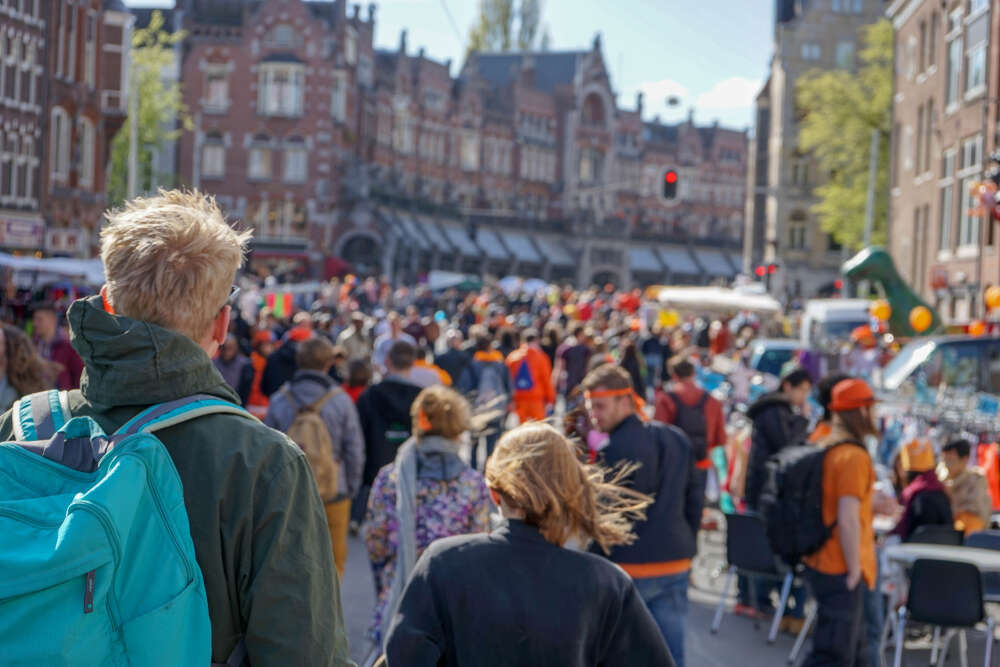 Everyone who comes Amsterdam rushes to the Museum Quarter, where the most famous exhibitions of the city are located, including the Van Gogh Museum. Also, to the Old Town in order to see the old buildings, small interesting houses, Dam Square and the Royal Palace. Travellizy Team also recommends:

Canals of Amsterdam are protected by UNESCO. They were created back in the 17th century. Therefore, everyone needs to see postcard views of Amsterdam personally. The spectacle is amazing especially after sunset, when the bridges are illuminated with lights, and the whole area makes a magical impression. 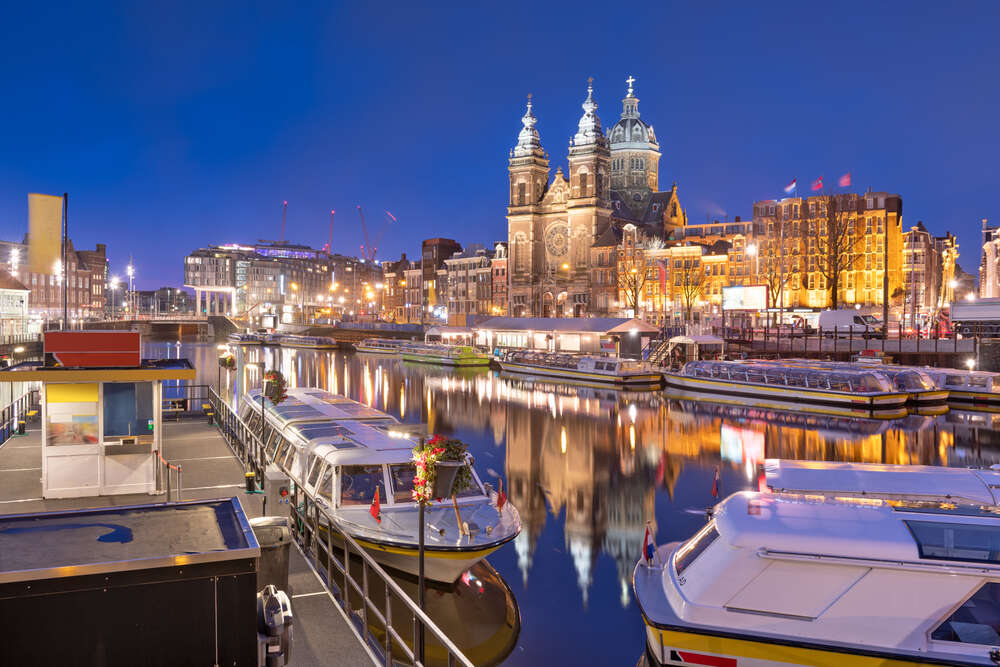 It costs from € 16 per hour. Private canal tours will cost € 250 for 2 hours, with a maximum of 12 people on board. Since 2019, an amphibious bus has been running, moving along the roads of the route, the transport gets off the water and continues the excursion along the canal. It costs € 25 per person.

Probably, not everyone wants to taste the local delicacy in the form of raw herring = broodje haring. There are fish carts all over the city. You will be offered a herringburger with onions and pickles. It is believed that it tastes best from May to July. The price for a similar sandwich is from € 3-4. Tourists strongly advise Stubbe's Haring stalls. 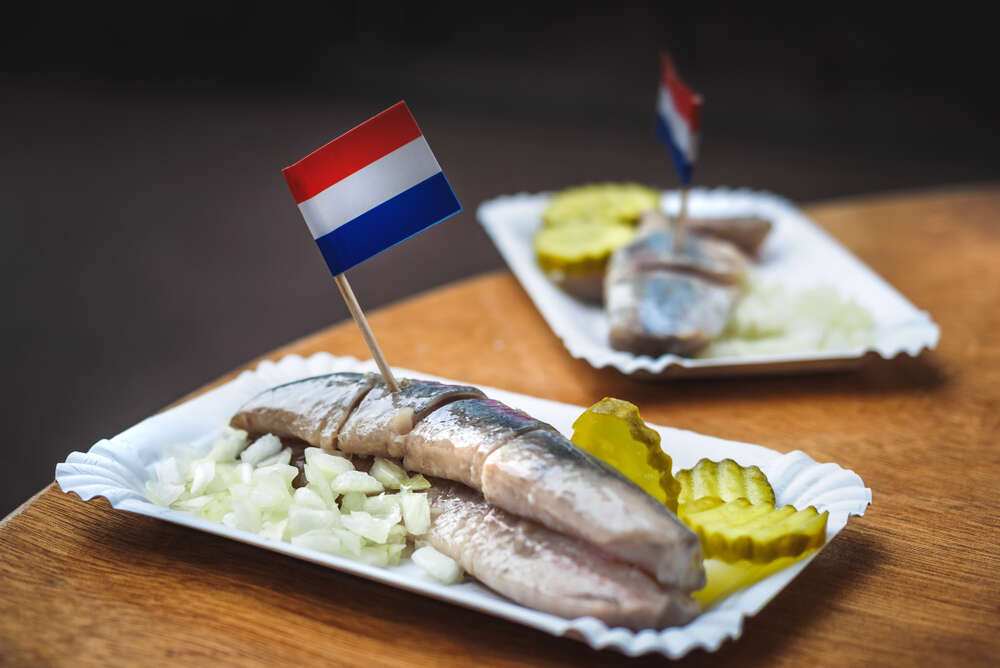 Kibbeling was created for those who did not dare to try raw fish. These are fried cod fillet pieces. They are served with mayonnaise sauces. 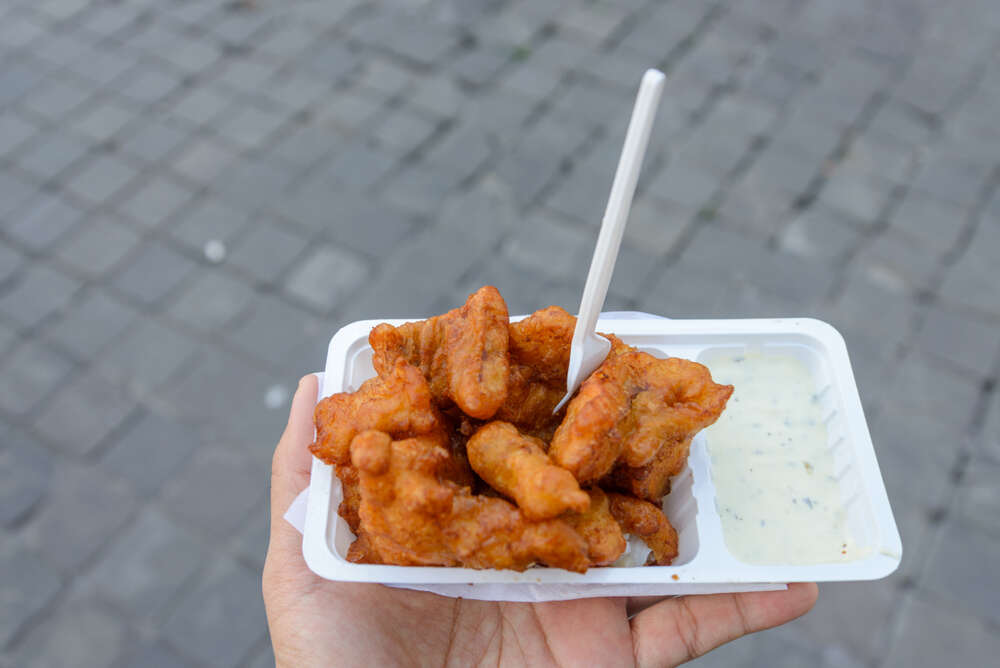 And in the automated FEBO restaurant you can not only have a snack, but also get a new experience. Self-service cafe, where all snacks are in vending machines, waiting for their order. Throw in a dime and get gravy fries, grilled cheese, croquettes, hot dogs.  distinctive feature of the establishment is the high quality of products, where freshness is guaranteed. 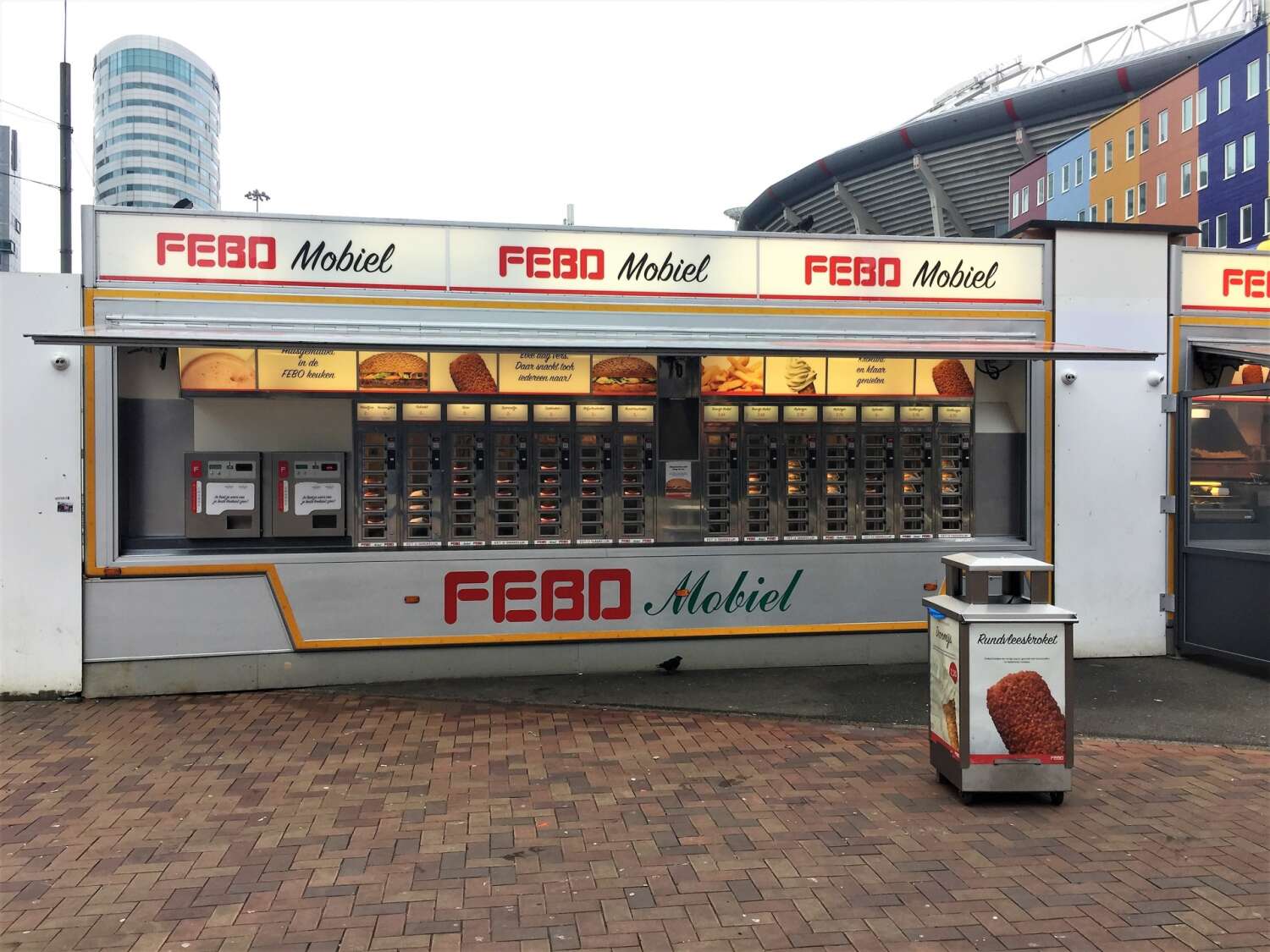 Since 2004, three huge I AMSTERDAM image signs have appeared in the capital. One of them is located in front of the Rijksmuseum, the second one is at Schiphol Airport. The third one is a mobile version, it is being moved to unexpected places in the city. Tourists like hunting it. 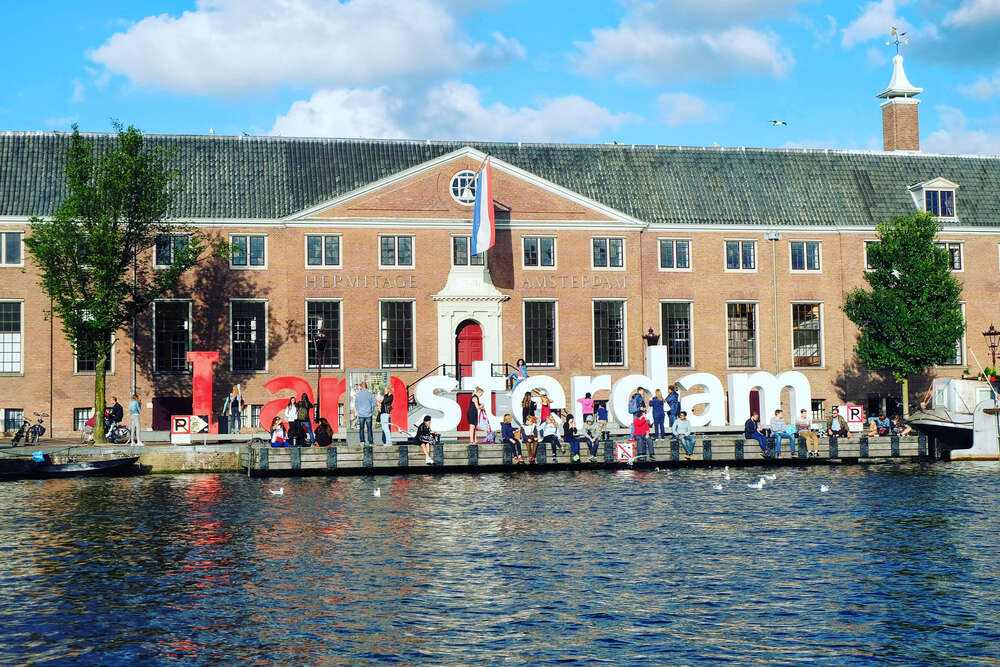 Ideas for the maximum program

Amsterdam will become closer, if you make an effort, create your own grandiose plan, think it over to the smallest detail, and then deviate with pleasure, finding new paths. 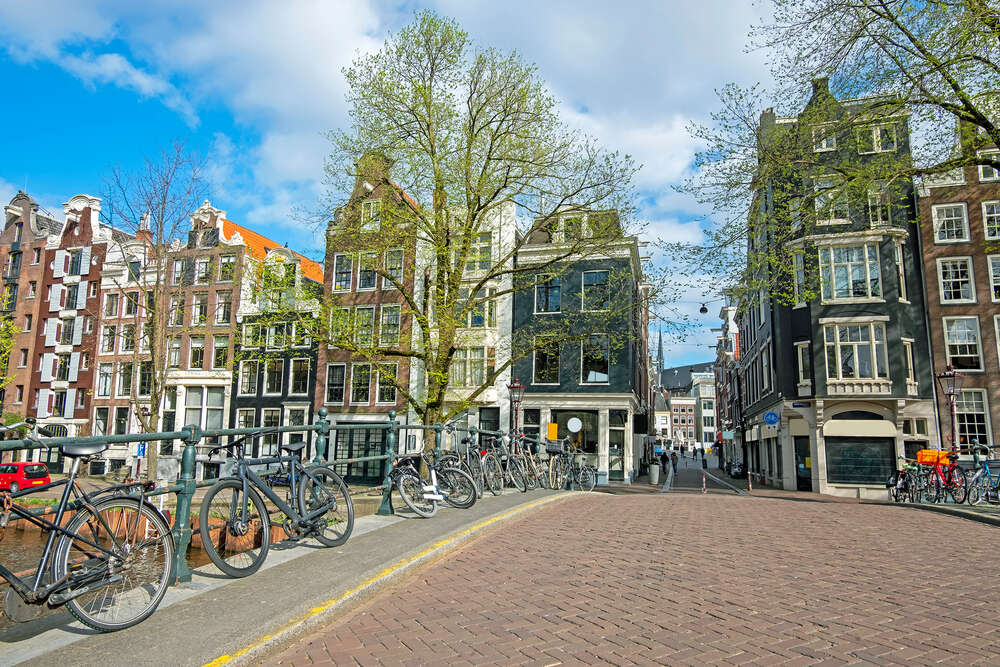 While walking, don't miss the area's highest observation platform. It is located at an altitude of 84 m, in the Protestant Westerkerk Church. For tourists, the door is open at 11:00. 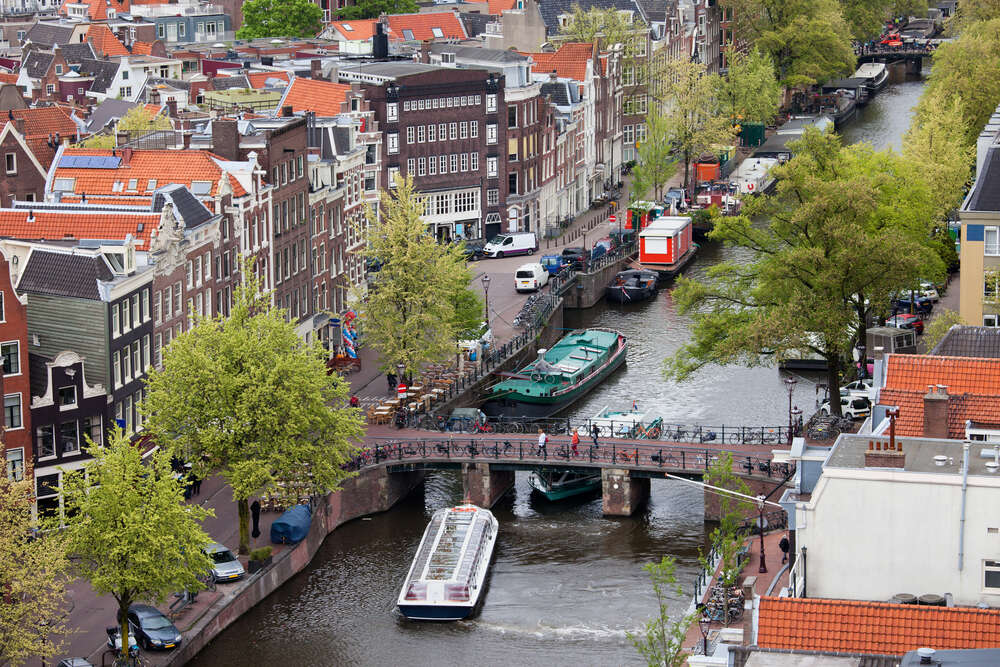 Visit the Anne Frank House. It works from 9 am to 7 pm. The ticket costs € 12.5 for an adult. True, not all tourists appreciate the museum, since the house is actually empty. 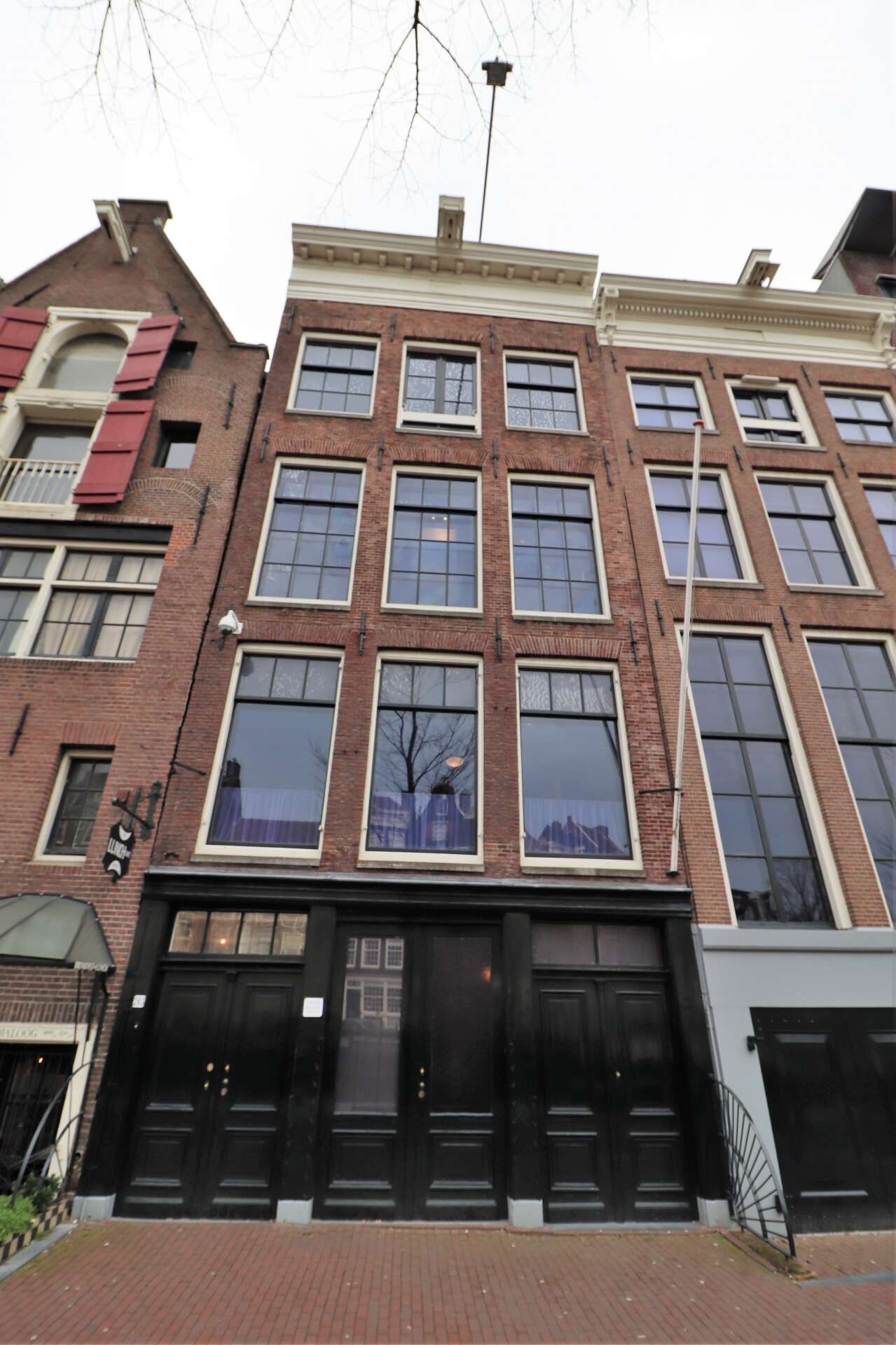 Don't miss the Tulip Museum. It is open from 10 am to 6 pm. Entrance costs € 5. There is also a wonderful souvenir shop that will delight everyone. 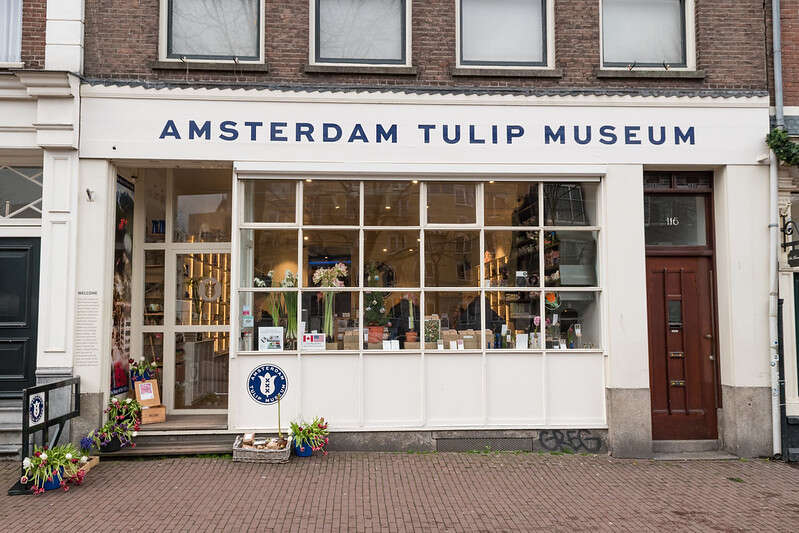 Travelers are advised to stop by for a short rest in the beer-cafe 't Smalle at Egelantiersgracht 12. People rush here for a delicious snack with fresh beer.

But the main attractions of the area are residential barges, quaint little houses with stucco moldings and medieval water pumps.

More than 800,000 bicycles “reside” in Amsterdam. This means that almost every resident of the city has 1 bike. Bicycles are an integral part of the life of the local population. Great cycling routes are organized here, and the flat landscape makes biking even easier. 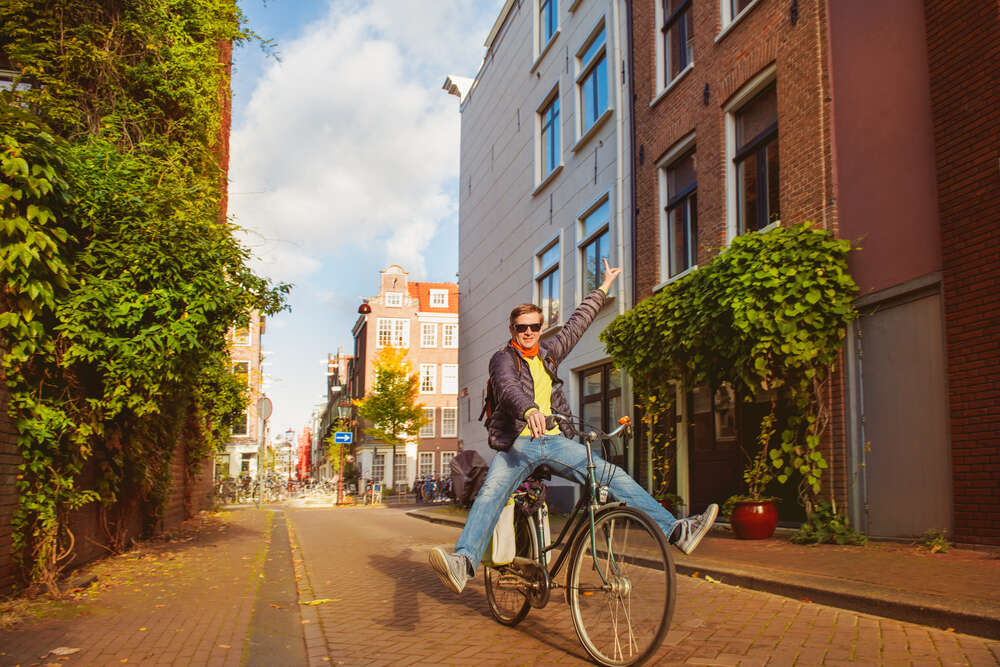 For a fantastic walk, head to Sloterpark, which has a lake and bike paths. There are swimming pools, a zoo and barbecue areas in the park. Various festivals are often held here.

For the rustic idyll of the 12th century, hurry to Ouderkerk aan de Amstel. It is full of historical sites.

Finding a bike rental point is not difficult. Bike rental costs from € 9 per day, theft insurance is from € 3 + € 40 deposit.

Westergas is a large complex, on the territory of Westerpark, from the former industrial buildings of the city gas plant. Today, it is a vibrant cultural center of Amsterdam. There are many bars, cafes, restaurants, as well as a mini-brewery, art house, cinema and food markets. 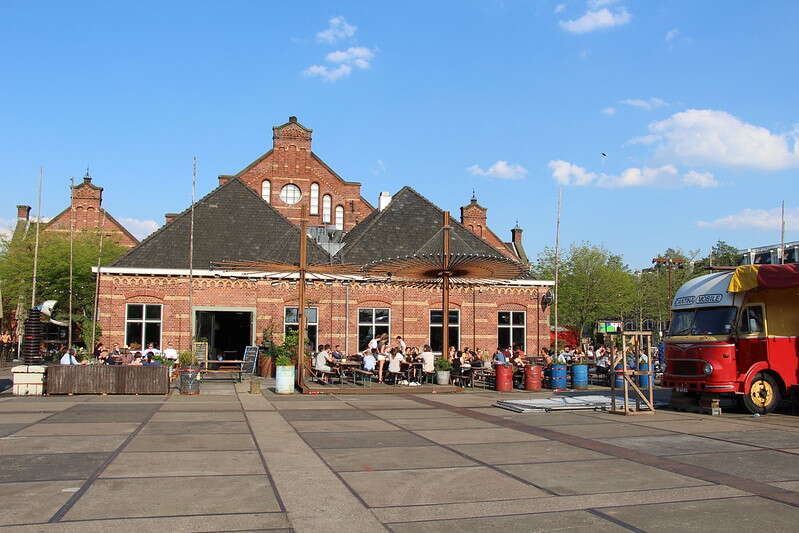 You can get here by public transport. For example, take bus # 21 from Amsterdam Central Station to Van Hallstraat / Westergasfabriek stop. At night, bus 283 runs from the Van Limburg Stirumstraat stop. From the center, take tram # 5. Certainly, all conditions for a comfortable bike ride have been created. 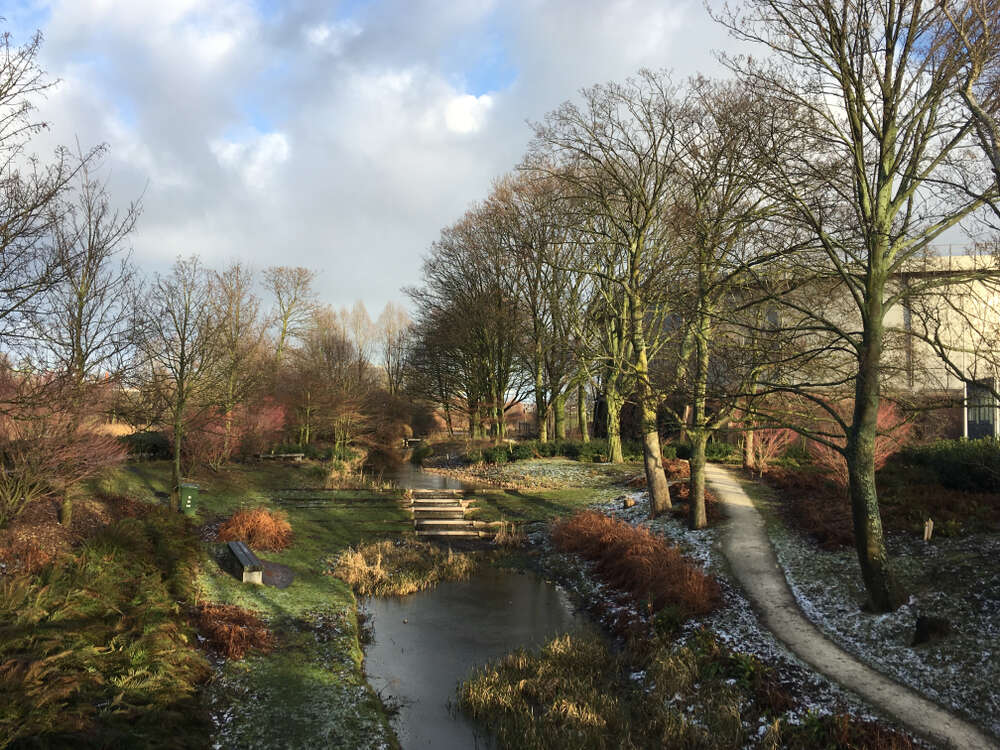 * There is a free WiFi zone throughout the territory.

One of the districts called Amsterdam Noord is separated from the city center by a body of water. Here, there is the creative site of the capital, the NDSM shipyard with beautiful green areas and peculiar architecture. Travelers will find startup sites, trendy cafes, and interesting sights. Concerts and festivals are often organized here. 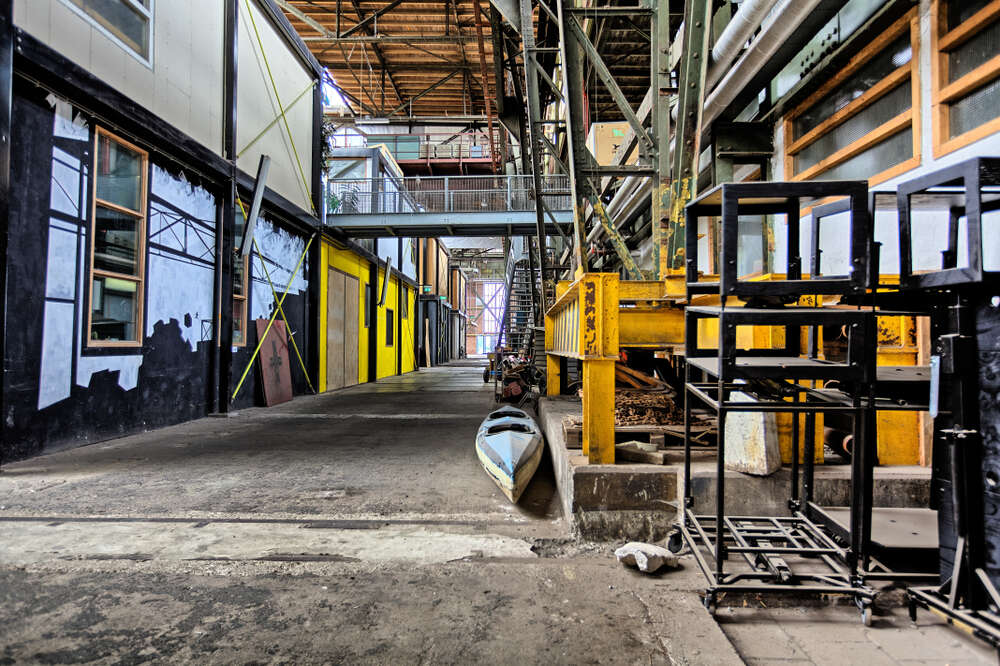 In this area, you cannot miss the most popular tower of the capital called A'DAM Toren. This landmark in Amsterdam is an official competitor to the Berlin TV Tower, the Eiffel Tower and the London Eye. The observation deck is open from 10:00 to 22:00. The ticket costs € 14.5, when buying online, you can get € 2 discount. 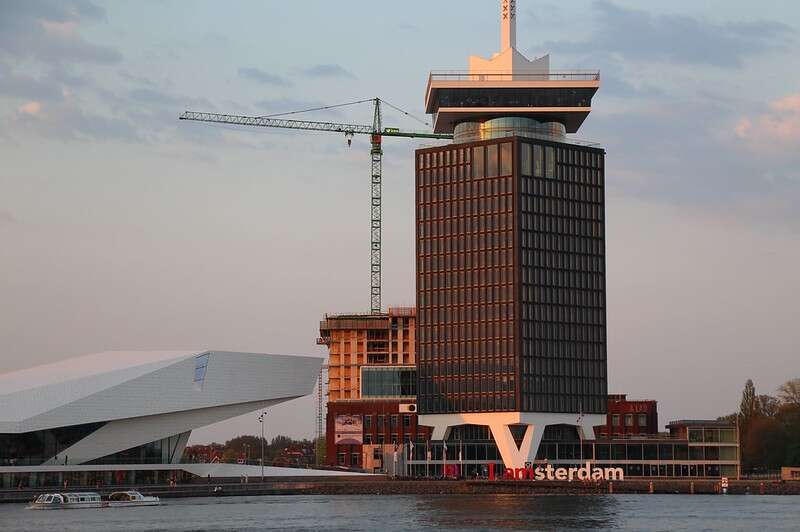 A visit to the EYE Dutch Film Museum will also be unforgettable. You can watch here classic and modern films, visit exhibitions. It is open from 9:30 am to 22:00, depending on the season (check the website). Ticket price for film viewing is € 11 + the same visit to the exhibition. 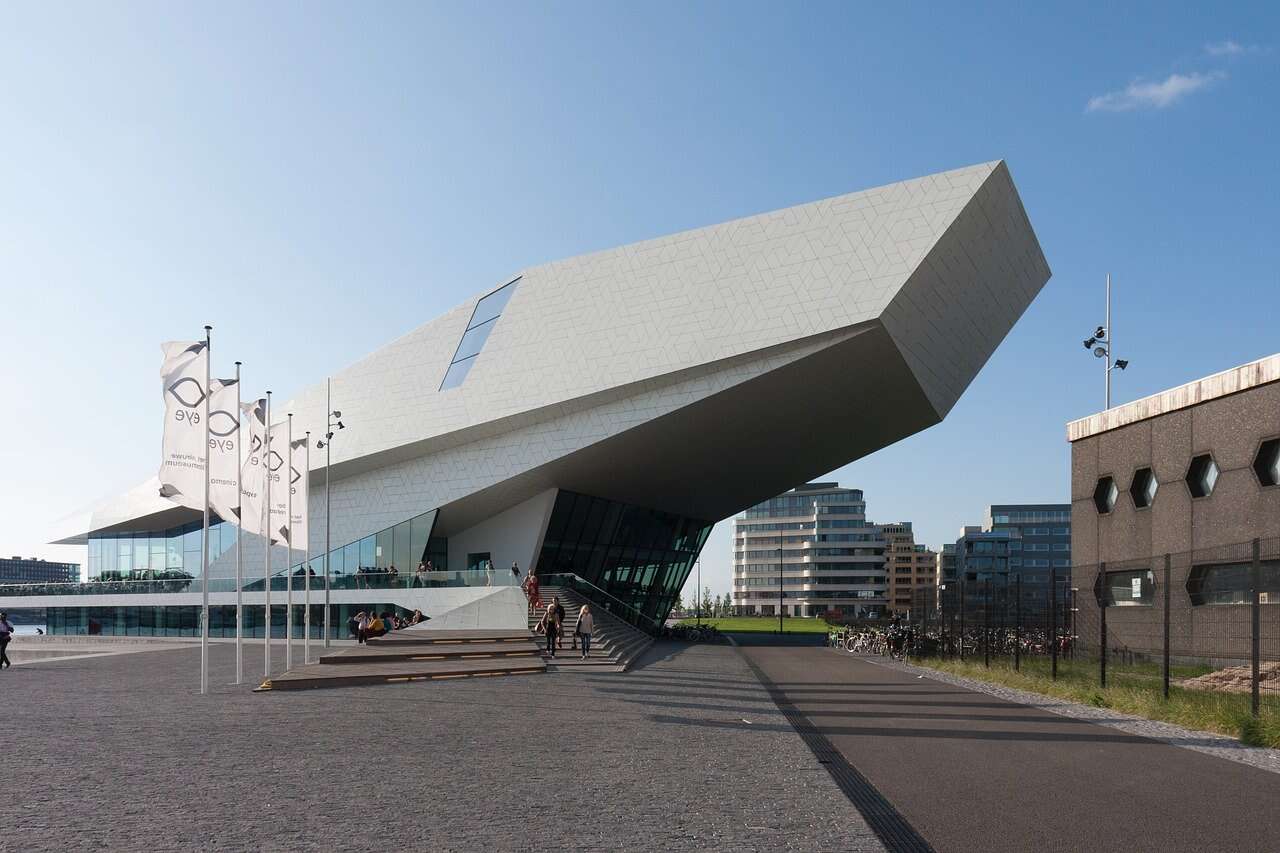 The easiest way to get to this area is by free water connections. From Amsterdam Central Station, take the leftmost ferry “NDSM”. The interval is every 15 minutes. The journey takes 15 minutes. The Friday and Saturday ferry is available until 3am. 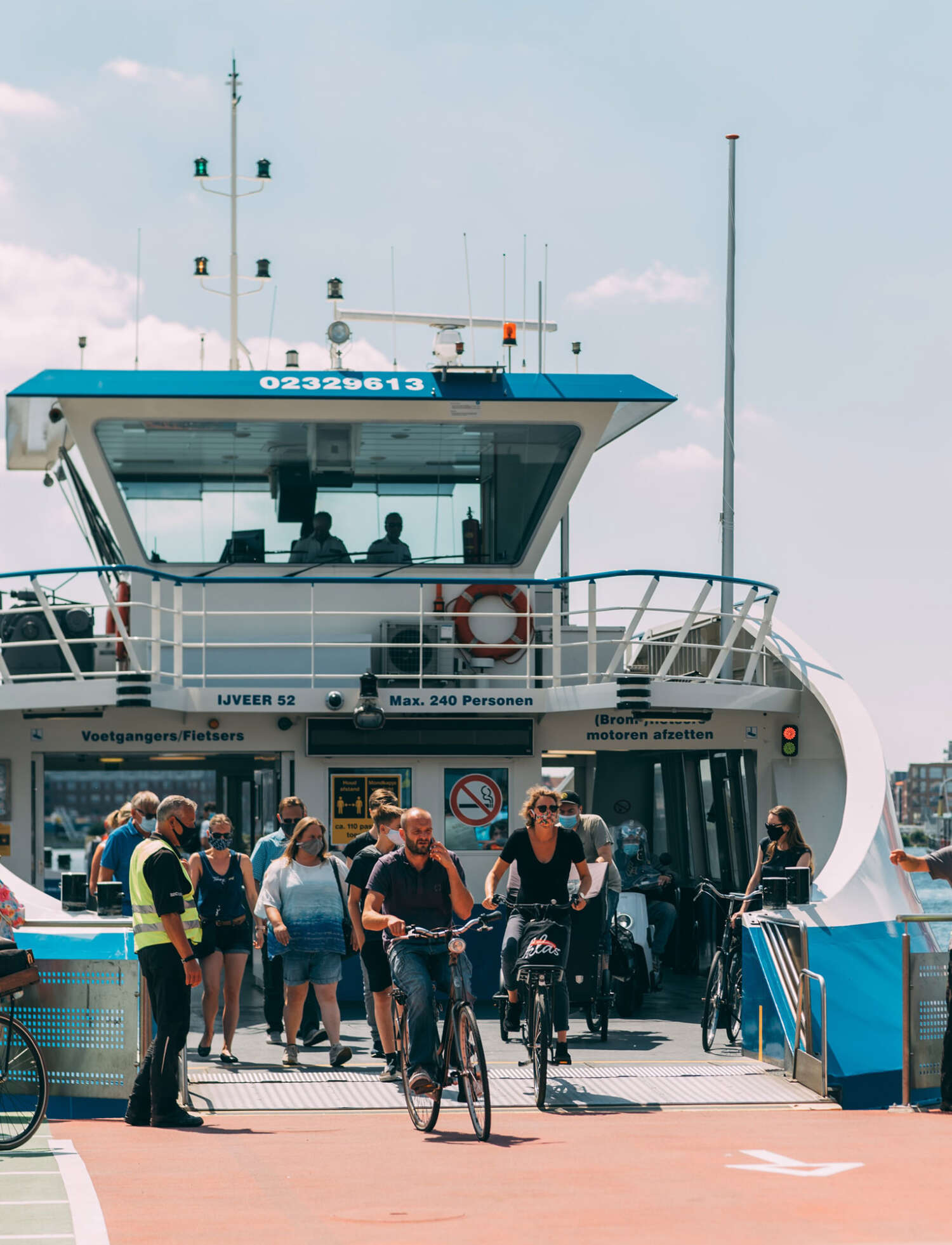 Travellizy Team advises not to forget about Dutch cheese and bakeries. And about atmospheric Barney's Coffeeshop Amsterdam, a marijuana store. And about the bridges of the capital. It's impossible to recount everything, because there are 600 (!) of them, but it's still worth trying!