Crater Lake: the deepest lake in the United States

The amazingly beautiful Crater Lake is located in the northwest of the United States in the southern part of Oregon. Despite the fact that there are no theme parks, no trendy nightclubs and restaurants, about 400,000 tourists come here every year to see it. Today, Travellizy Team will tell you about the deepest lake in the United States. 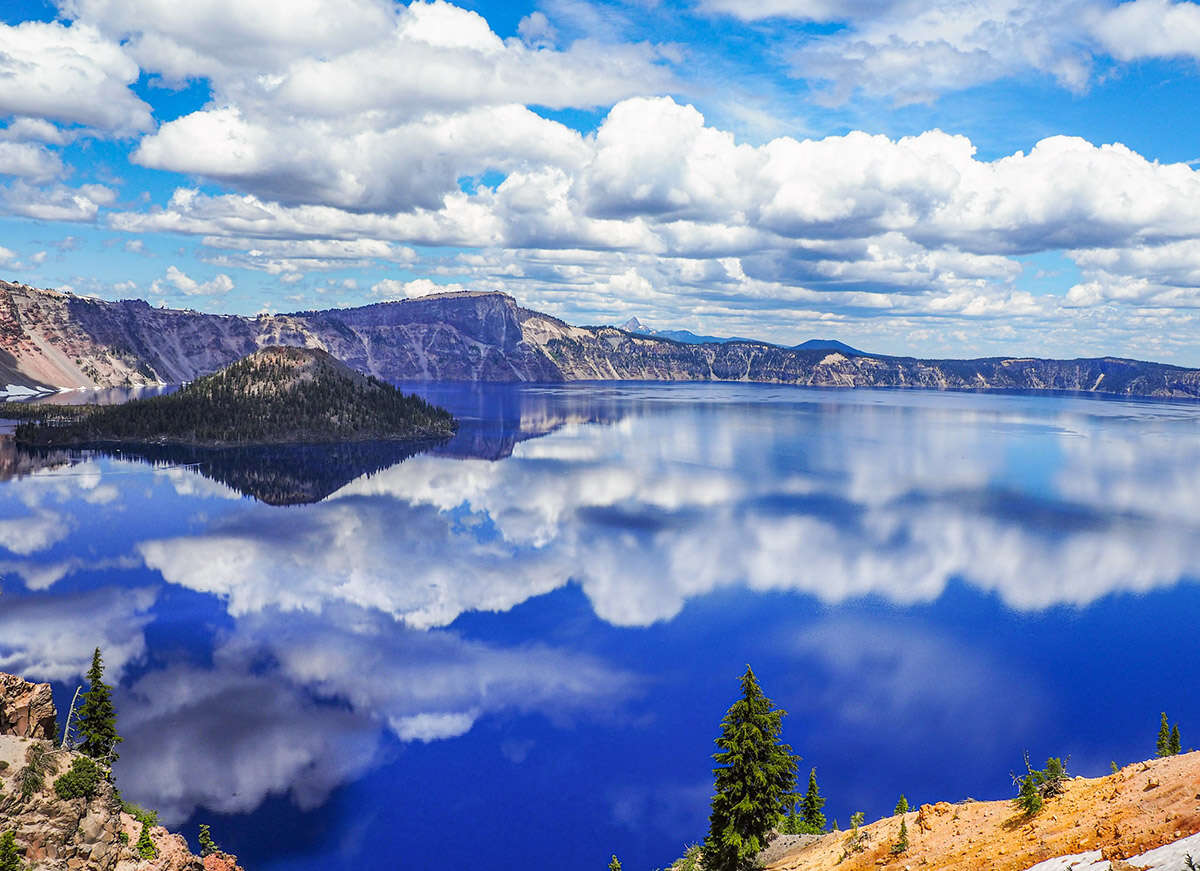 Crater Lake was formed quite recently by historical standards: only 7,700 years ago. A powerful earthquake shook Mount Mazama, changed the landscape, and volcanic dust covered the sky for several hundred miles, all the way to Canada. For several days in a row, hot magma was being ejected from the volcano. Mount Mazama partially collapsed, thereby forming a caldera (the so-called basin of volcanic origin). Rains and snow began to fill the formed cavity with water, and this continues to this day.

Archaeologists and geologists study this extraordinary event by traces in the soil, and historians - by the myths of local Indian tribes, the most famous of which is the Klamath Tribes. This nationality, like other Oregon Indians of the Modoca and Yahuskin, Makalaka still live on the territory of Oregon.

But don't think that civilization hasn't reached these lands yet: even the drivers of ultra-modern electric vehicles can recharge here, so to say, in the middle of the forest. 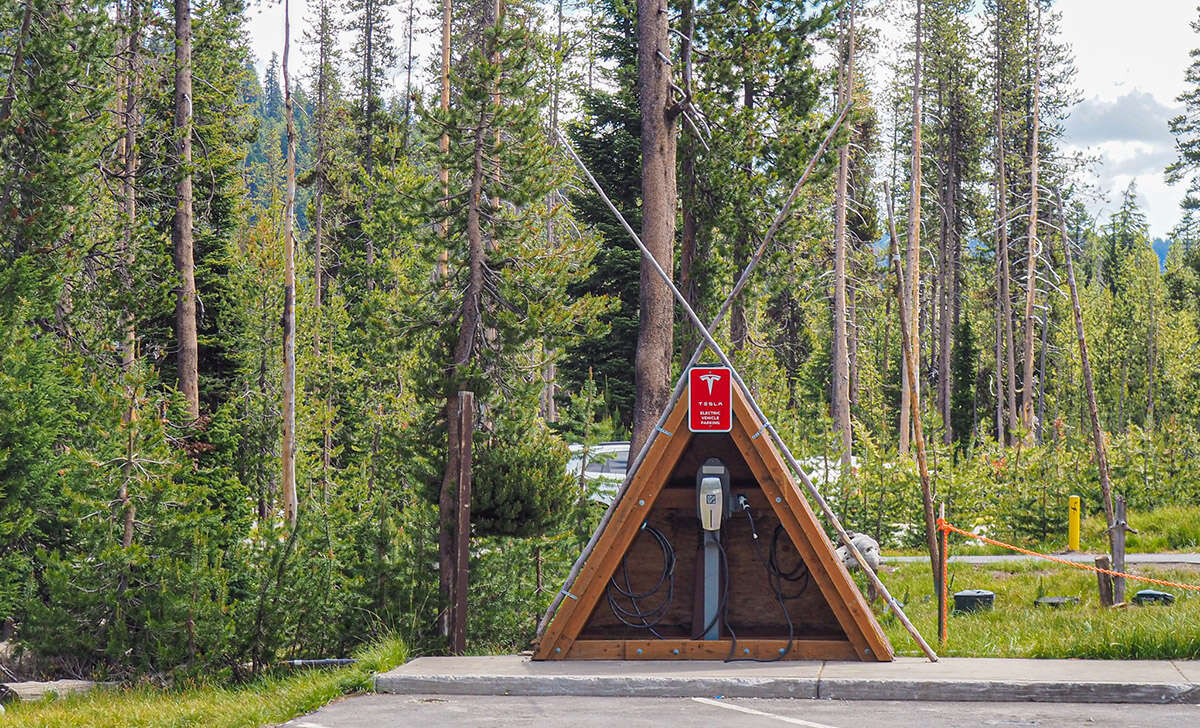 It is best to start your visit to the lake from one of the two information centers. You can get here the latest issue of the newspaper, which contains up-to-date information on regulations, weather, fun facts, and useful tips. 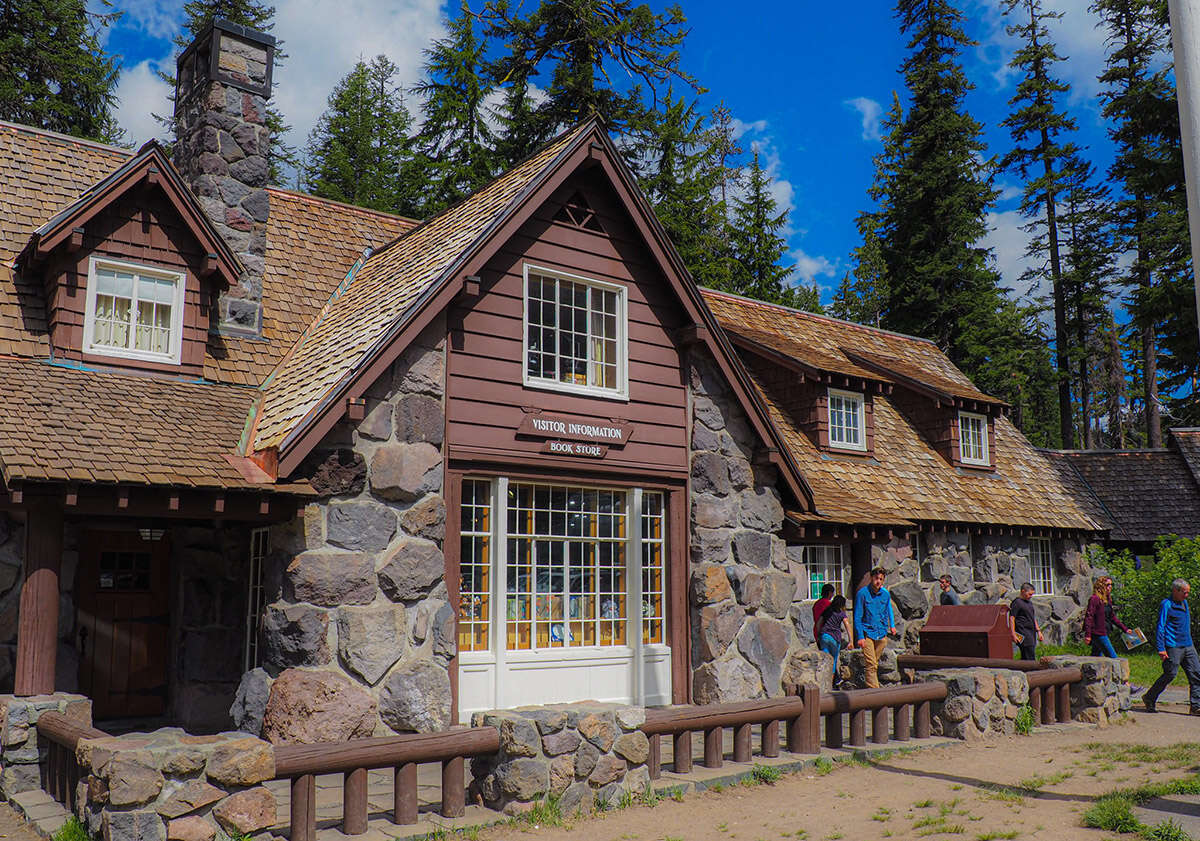 When visiting Crater Lake National Park, keep in mind that the Internet and mobile communications are generally the exceptions, not the rule here, so stock up on paper maps or download offline maps to your phone. It is easy to get lost here, so do not tempt fate in vain.

The number of parking spaces near the visitor centers is very limited, so it is better to arrive in the morning, before the opening. 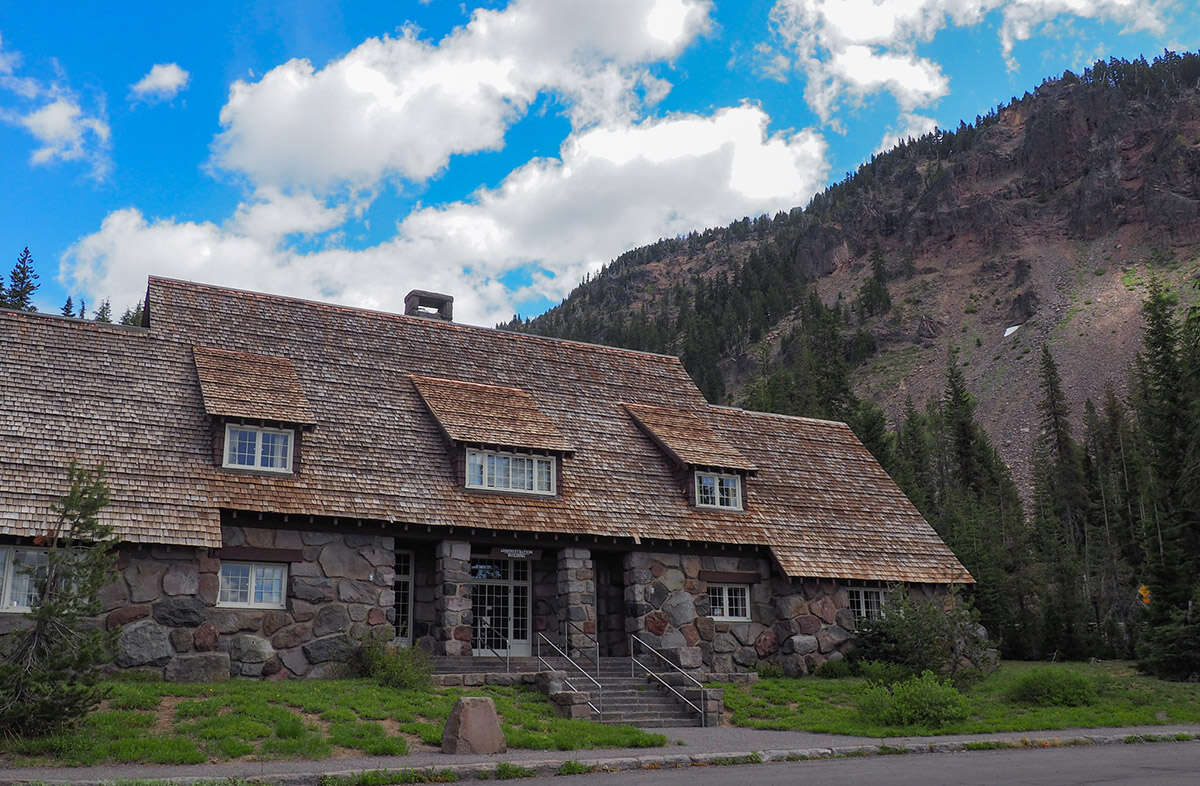 In the centers, you can also buy souvenirs for all tastes and refresh yourself in the cafe-restaurant. During the COVID-19 pandemic, security protocols are implemented, so make sure to check in advance if visitor centers and food outlets are open. 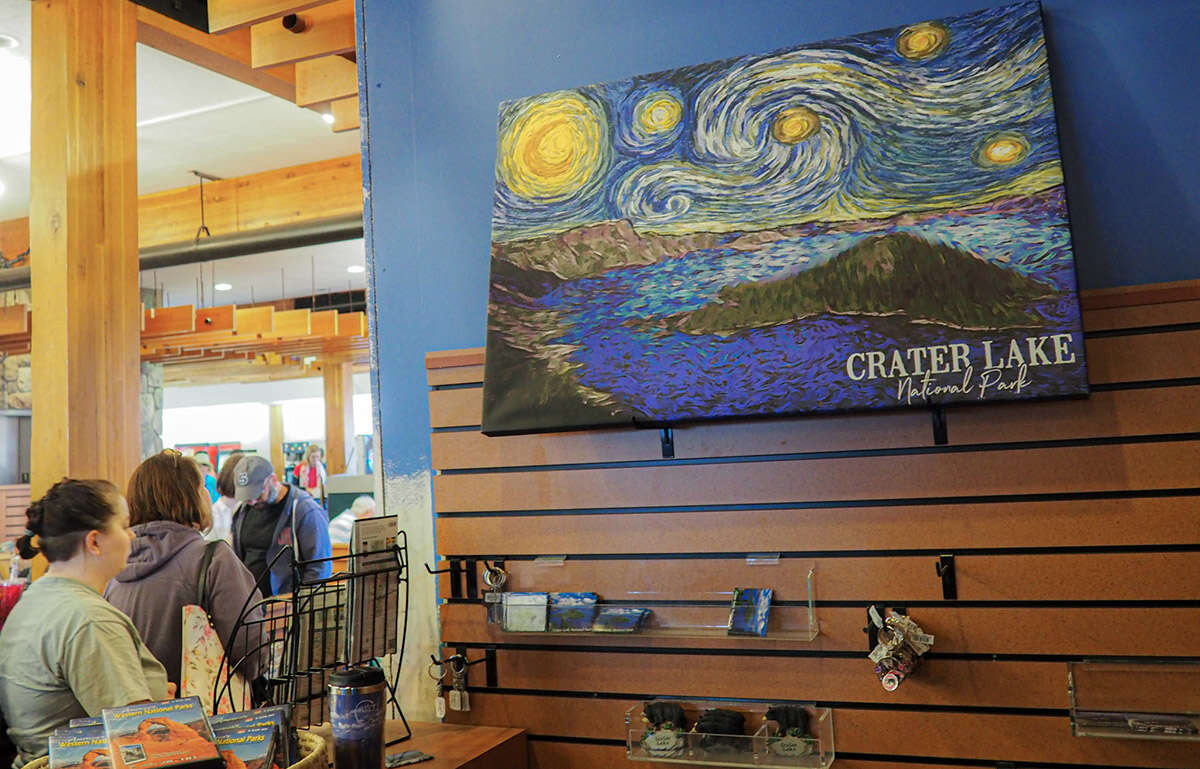 Tourists are primarily interested in the panoramic views of the lake and its piercing blueness extending 589 meters deep. The transparency of the water is explained by the fact that the lake is very young, it has little flora and fauna. But the main reason for the crystal clearness is that the lake is filled exclusively with rainwater or melted snow. There are no other sources of moisture entering the lake, therefore there are no pollutants such as clay, mineral suspensions, dust. 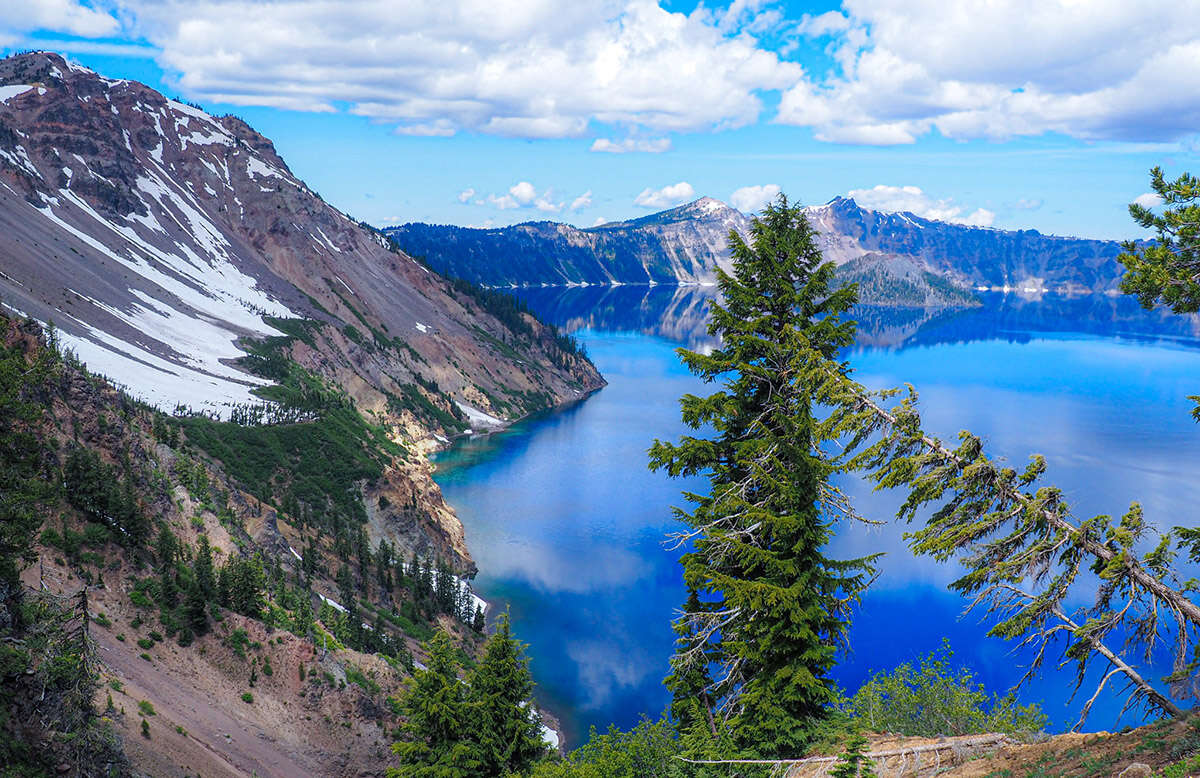 The purity of water masses is constantly monitored by scientists and researchers. To measure transparency, a special disc is used, painted in contrasting colors. This device is called a Secchi disc. 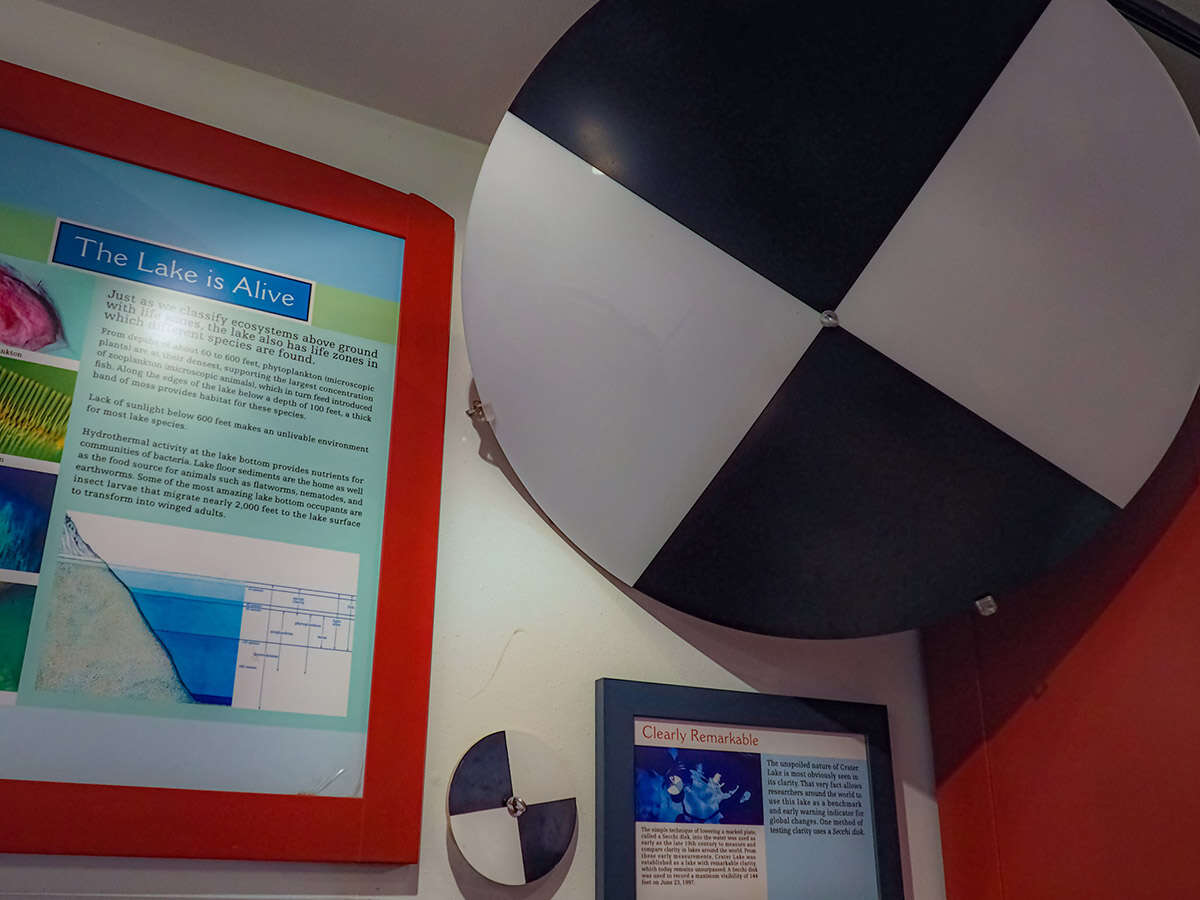 It is immersed in a lake and the result is recorded: how deeply the outlines are visible. So far, Crater Lake shows excellent parameters and is considered to be one of the cleanest lakes on the planet. Drinking water can be taken directly from the lake without any filtration. 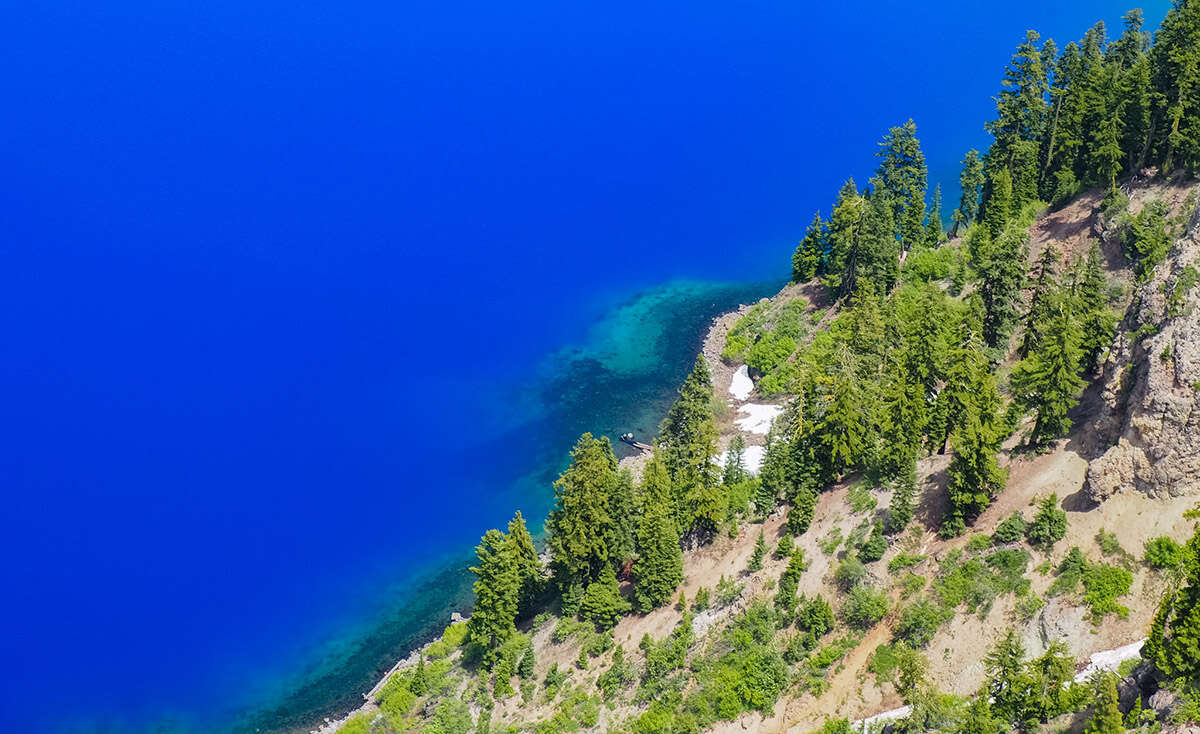 To swim here, tourists need to walk to the small bay called Cleetwood Cove. This is the only place that is considered to be safe for travelers and where it is officially allowed to enter the water. Despite the constant reminders of the rules of behavior on the water, carelessness took the life of a 27-year-old student in 2019. He took a bad jump into the lake from a cliff and died. The water temperature in the lake is always very low (about 3°C), so you need to soberly assess your strengths and capabilities. It is prohibited to use any wetsuits: they may contain microorganisms from other bodies of water, which means there is a risk of water contamination by invasive species.

For the record of fishers

The uniqueness of the biological composition of the lake's water is supported by its legally protected status. Now environmentalists strictly monitor that foreign organisms and plants do not enter the lake. Unfortunately, this was not always the case. Artificial marine stocking, which was thoughtlessly carried out at the end of the 19th century, led to negative environmental consequences. The lake was home to many fries of six species of commercial fish, which caused the almost complete extermination of a rare indigenous inhabitant of the island: the Crater Lake newt. It is found only in this lake and not anywhere else in the world. While walking at the water's edge, attentive tourists can see this small, up to 10 cm in length, amphibian, hiding under rocks or snags.

You can still catch trout and salmon in the lake. Fishing is allowed here in any quantity, but only for artificial bait. The use of organic baits is strictly prohibited. Fishing does not require any licenses, so you can fish from the shore as long as you like. But you cannot bring your boat or any other floating means. All walks on the water surface are only on official tours.

The highlight of the lake, which makes it unique, is the picturesque islands. One of them bears the magical name Wizard Island. You can get there by signing up for a boat tour. And while the boat is moored, you can fish! 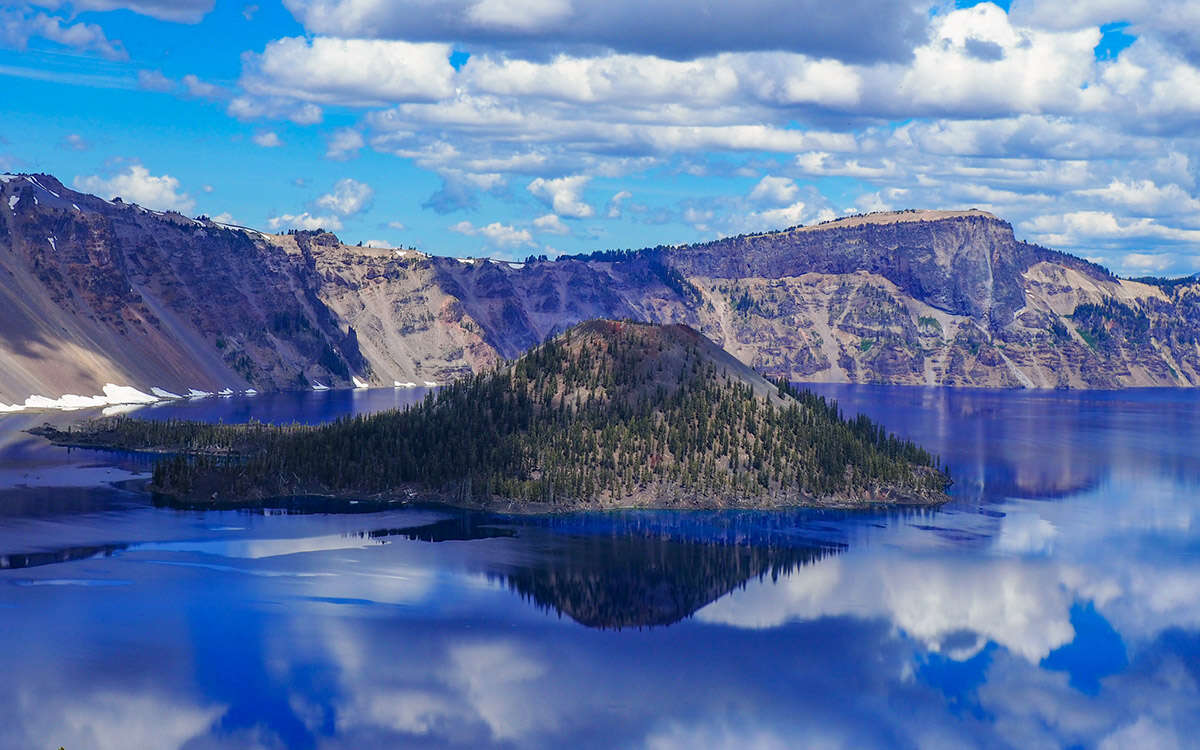 The second island is called the Phantom Ship. Despite the fact that it looks small from the viewing platforms, its height is comparable to a 16-storey building! 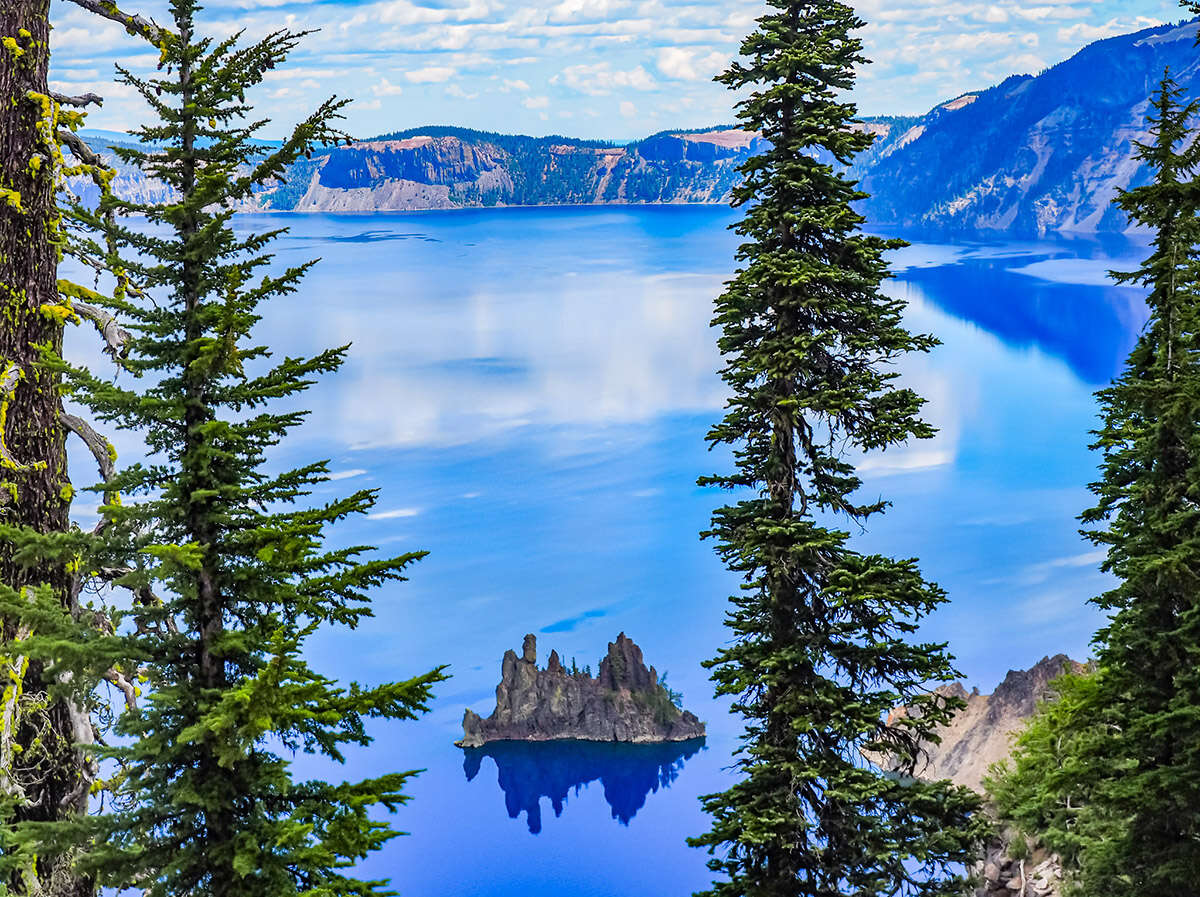 Both islands are of volcanic origin. A detailed video on how science explains the origin of such unusual lakes and places can be watched in a small museum next to the visitor center. 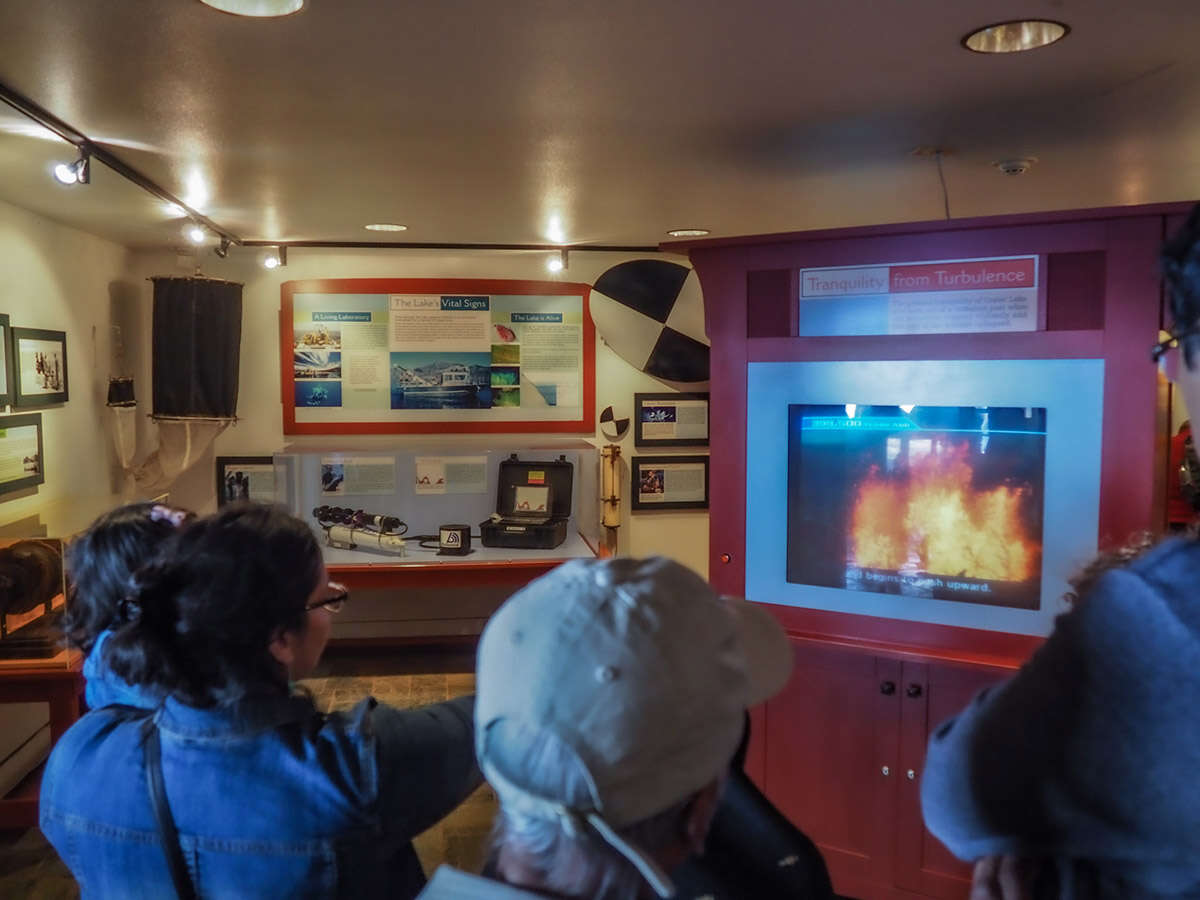 For up-to-date information about tours, rules, and restrictions, visit the official website of the park.

The lake is located at an altitude of about two kilometers above sea level, where the climate is harsh, with frequent snowy precipitation in the winter months. The visit should be planned from June 15 to September 15, while the roads are open and the risk of snowfall is minimal. At the same time, the lake water perfectly retains a low above-zero temperature, so it rarely freezes. On cold days, a thin layer of ice can be seen on the surface of the lake, which quickly melts under the sun's rays.

During snowfalls and bad weather, excursions are not conducted, and the roads are blocked. 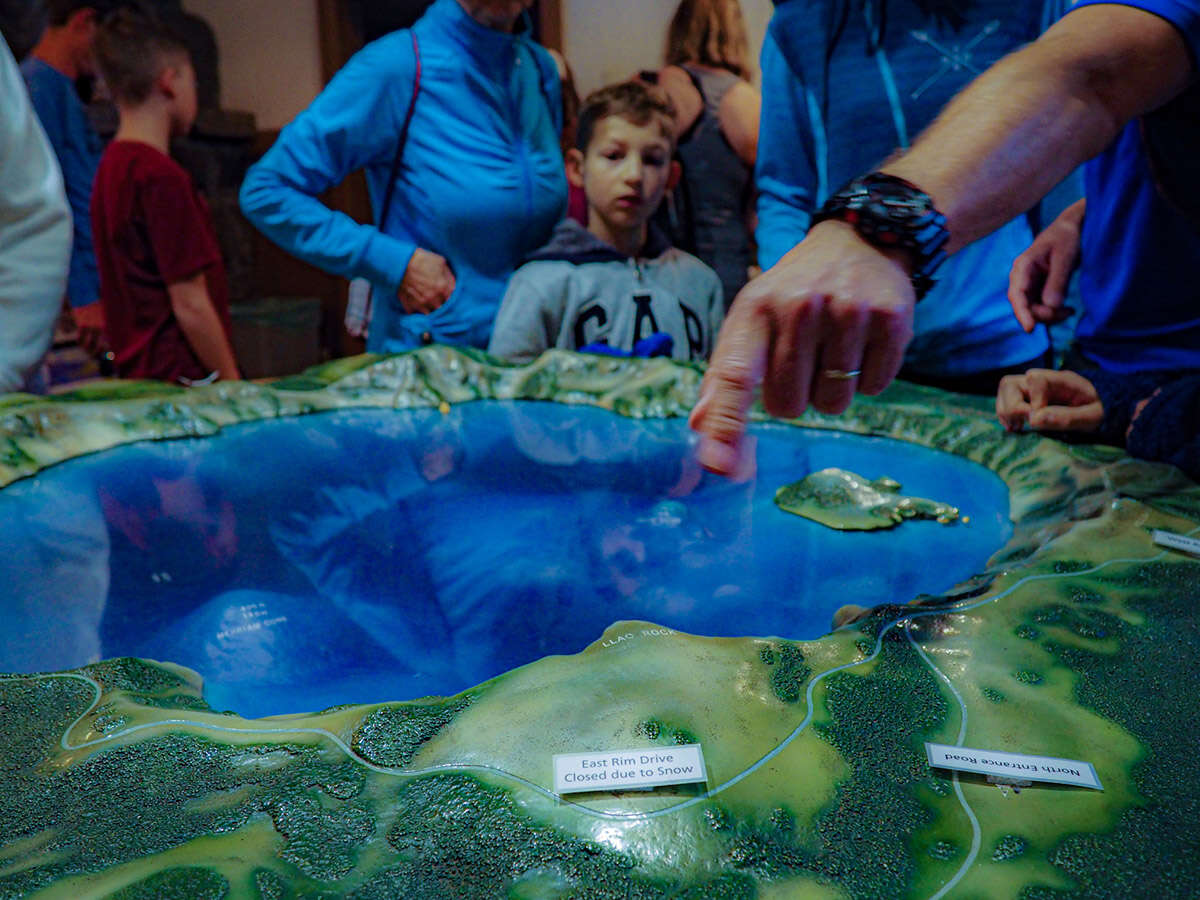 Even in the summer season, there is snow here, so you should bring warm clothes, hats, and comfortable shoes with you if you are going to walk along the coast. Sun rays are very dangerous at this altitude: without sunscreen, you can quickly get burned even in cloudy weather. Even in the middle of summer, the roads can be covered with snow several meters thick! 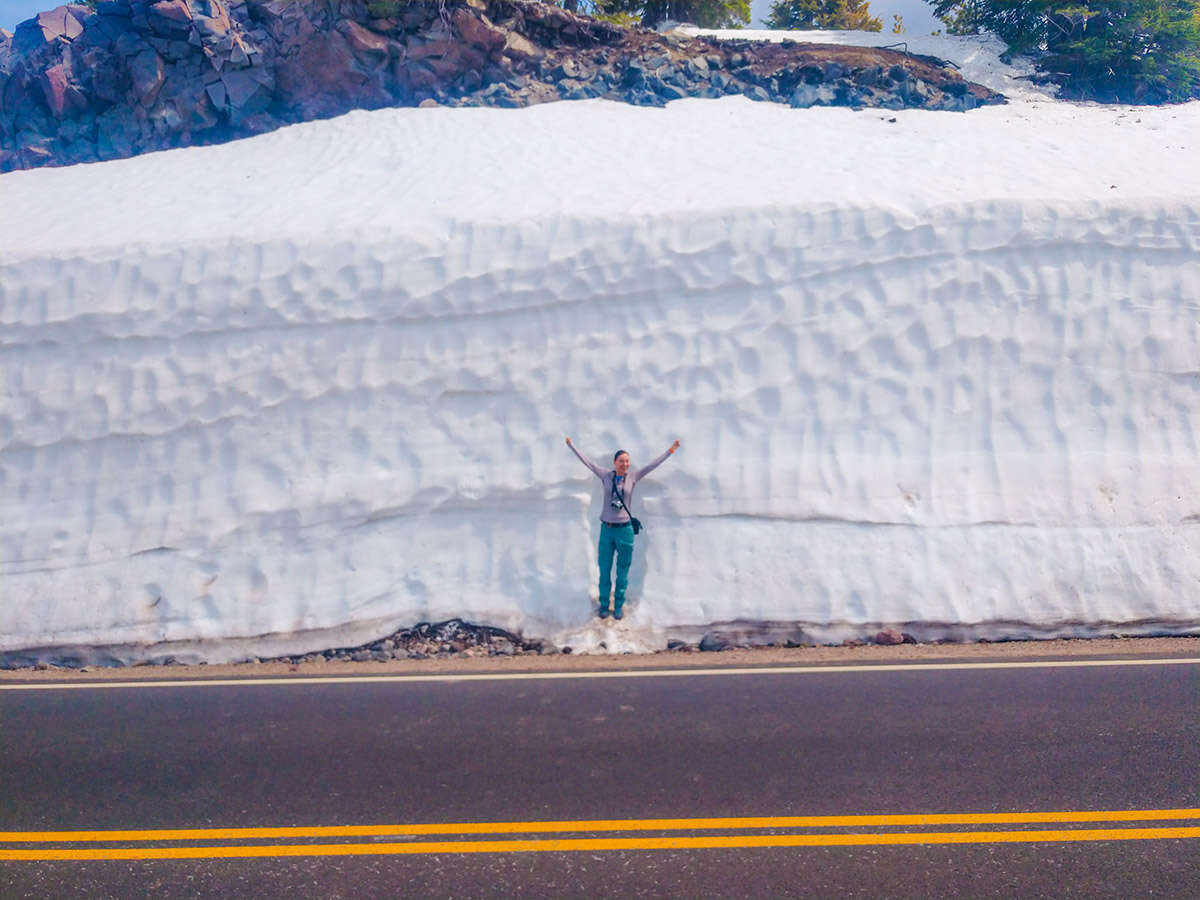 Part of the Pacific Crest Trail

The Pacific Crest Trail is a world-famous hiking trail. It stretches from Mexico to Canada for several thousand miles through the vast mountains of the Cordillera, on the west coast of two American continents. We wrote about the American part of this route in the article "Sierra Nevada: Mountain Peaks of Eastern California". 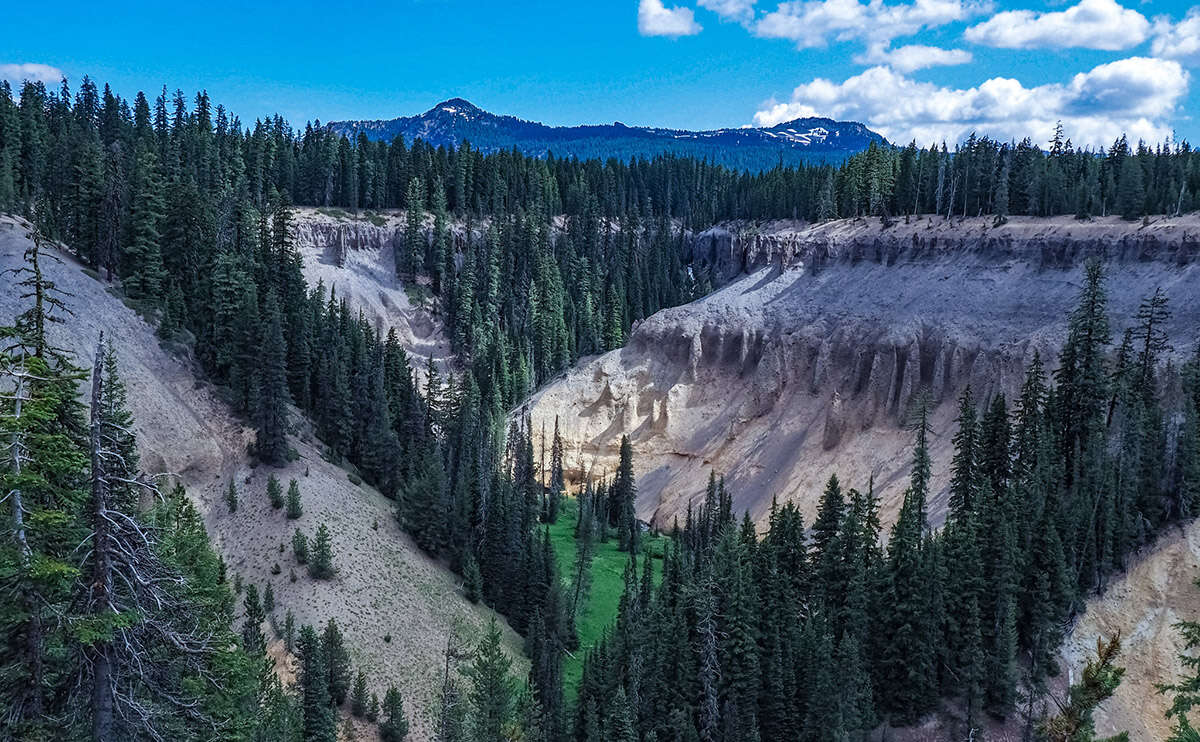 Crater Lake is part of this popular route. Camping sites in the area accept thousands of guests, but the most comfortable and expensive option for staying by the lake is the Crater Lake Lodge Hotel (from $ 200 per day). It is located on a cliff, which gives the rest a unique atmosphere. 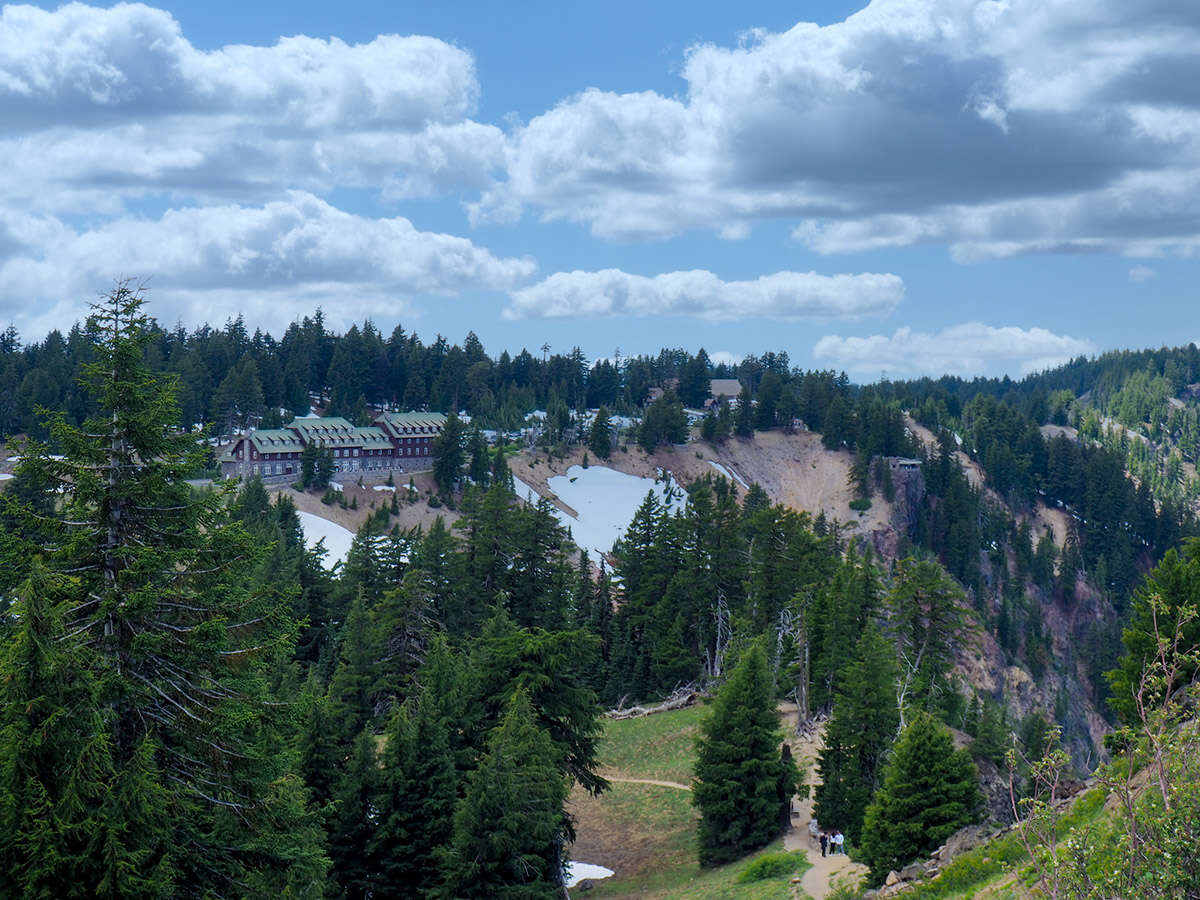 60% of this land is covered with forest, which is home to a variety of animals and plants. Bears, the largest predators in North America, live here. They usually try not to be seen by people, but attracted by the smell of food, they often approach campgrounds and parking lots. Never leave your food in a car or tent, as bears accustomed to eating near humans are considered to be dangerous and must be killed even if they did not attack humans. Even one chocolate bar or bun left in a car may seem to bear a sufficient reason to open the car in the most barbaric way. But on the busiest trails, where tourists make noise all day, it is almost impossible to see a bear. 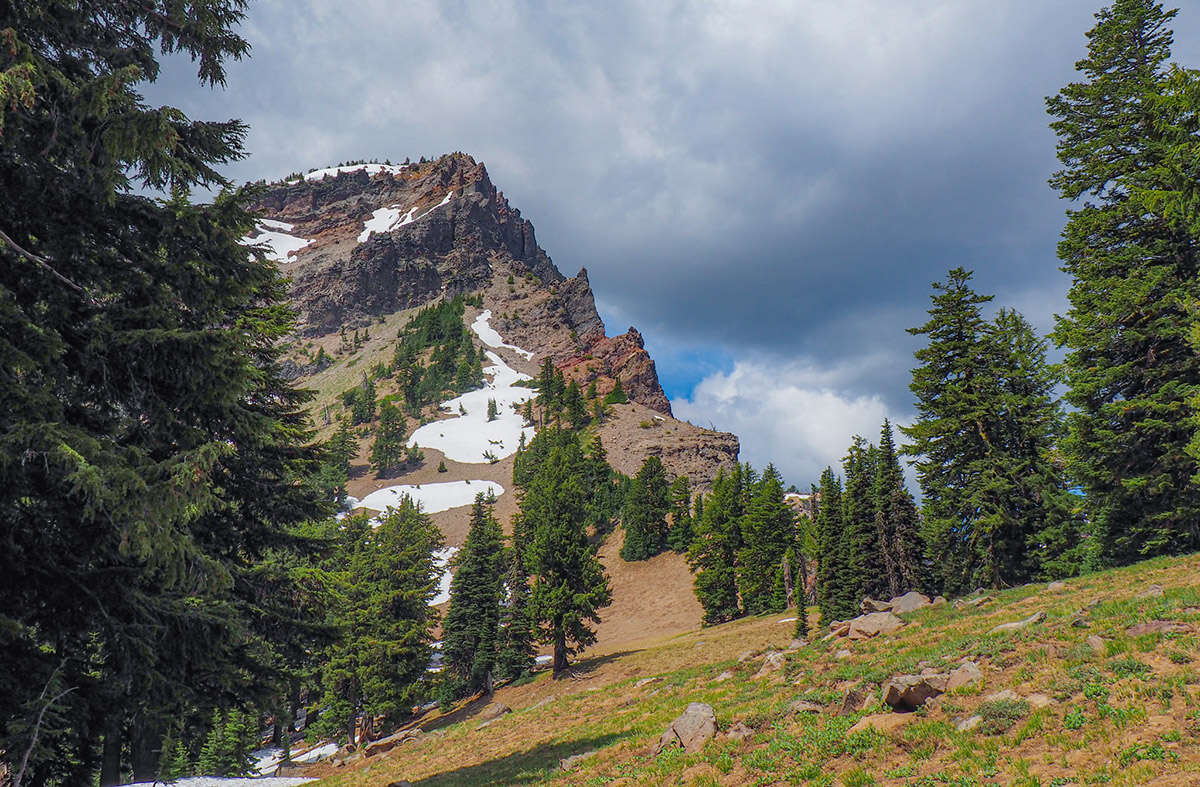 Bears learn quickly, therefore, once or twice eating from an open trash can, or looting a tent, they will constantly wander around. This will inevitably lead to collisions with people, and the rangers will have to kill the bear.

Another danger that people put animals in is traffic accidents. Narrow serpentines, difficult weather conditions, speeding some of the animals die under the wheels of cars.

The wildlife of Crater Lake Park pleases guests with the possibility to see both bears and much less dangerous deer, so keep your cameras ready! 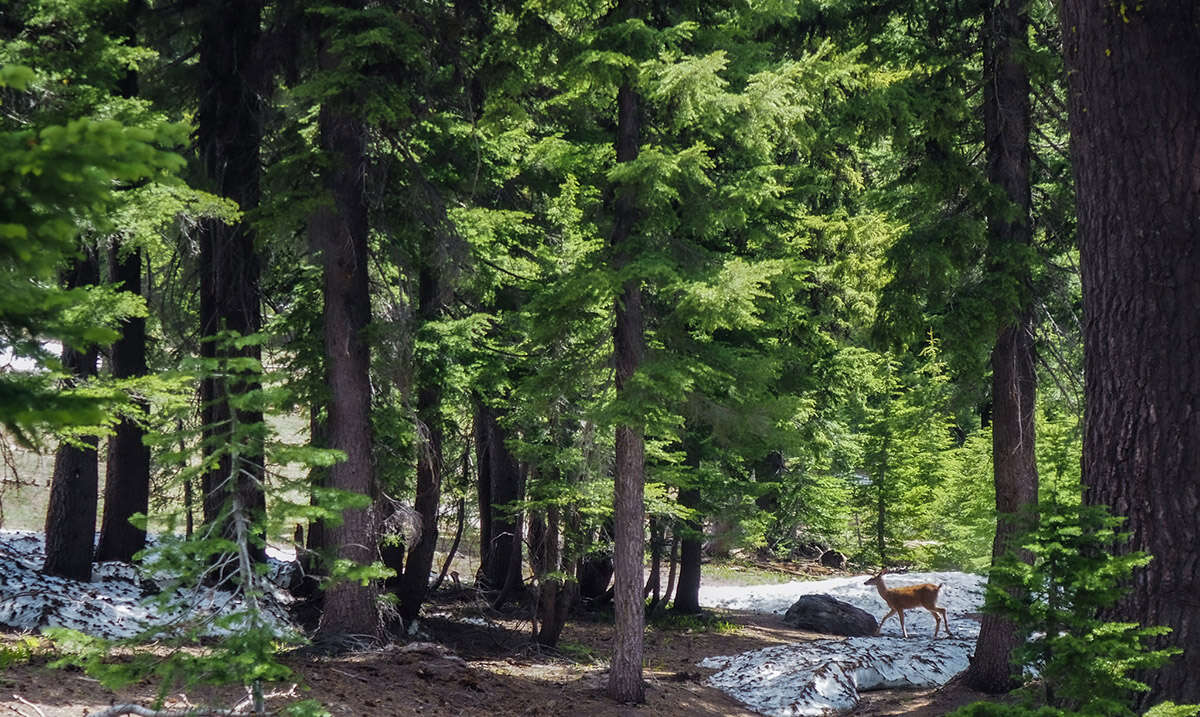 To make it easier for nature and travel lovers to get ready for a trip, the park has installed webcams, so that anyone can see what the weather is in Crater Lake Park in Oregon.

There is no public transport here, so a trip to Crater Lake is a full-fledged road trip. Distances to large cities are significant:

When you decide to go on an adventure to the blue lake formed by a sleeping volcano, Travellizy Team will help you plan your trip!