Strasbourg: the most beautiful city in the French province of Alsace

Do you dream of visiting a small picturesque town with cozy streets and bright houses decorated with flowers and toys? Walking carefree along the river canals, spontaneously turning from lane to lane, enjoying the delicious aromas of fresh pastries from cafes and bakeries... Travellizy Team can take a long time to describe perfect leisure for travelers, who were fortunate enough to visit the fabulous French city called Strasbourg. However, once in this city, you immediately remember how in childhood you looked at the pages of colorful fairy tales and thought that the city from the picture was an invention created by the artist’s imagination. Now, this city is in front of you. It turns out to be quite real. Its charm is not a bit exaggerated, it is saturated with history, and its squares are decorated with amazing half-timbered houses and temples built in the XII century.

Where is Strasbourg located?

Strasbourg is located on the border with Germany, hence the German name of the city. Alsace has long been a bone of contention between the two states. Only after the end of the First World War, Alsace finally came under French rule.

The influence of German architectural traditions on Strasbourg is obvious, but they are abundantly flavored with French charm. The city has a special color.

Together with Travellizy, we offer you to immerse into the unique world of Alsatian antiquity and follow the route of the most interesting sights of Strasbourg:

● Petite France is one of the main attractions of Strasbourg. It is this picturesque and romantic quarter that can be seen on postcards and souvenirs of the city. Petite France is located on the Grand Isle (Grand Ile), separated by canals from other parts of Strasbourg. The incredible color of this area captivates from the first minutes of walking along the Ile River canal, which reflects the facades of half-timbered houses. Lanes, cafes, balconies, everything is decorated with fragrant colorful flowers.

Choose a cafe overlooking the canal and enjoy the beauty around! 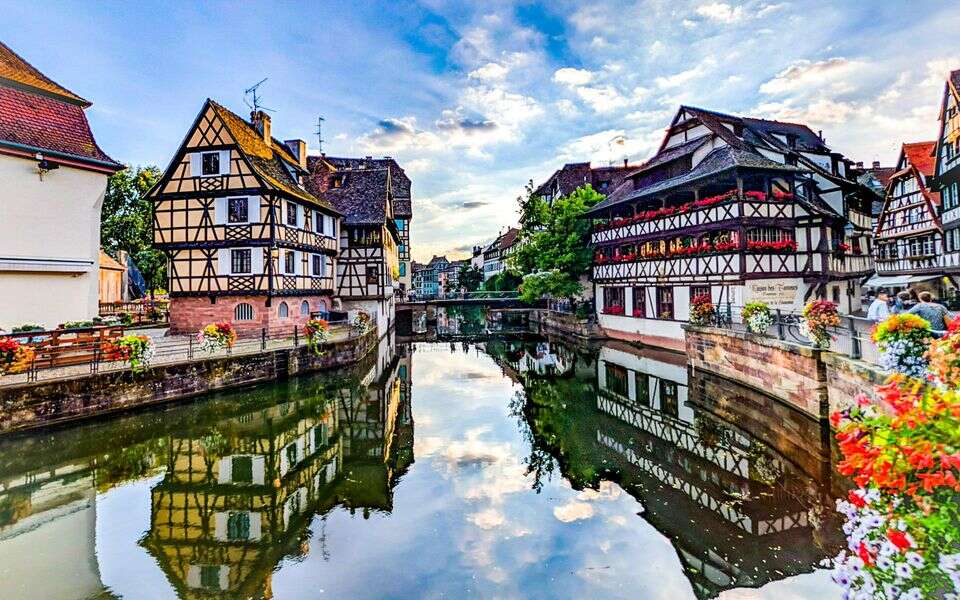 ● Place Kléber is the place where all the main celebrations and events of the city are held. The square is located in the historic center of Strasbourg. In the middle, a monument is erected in honor of General Kleber, the native of Strasbourg. 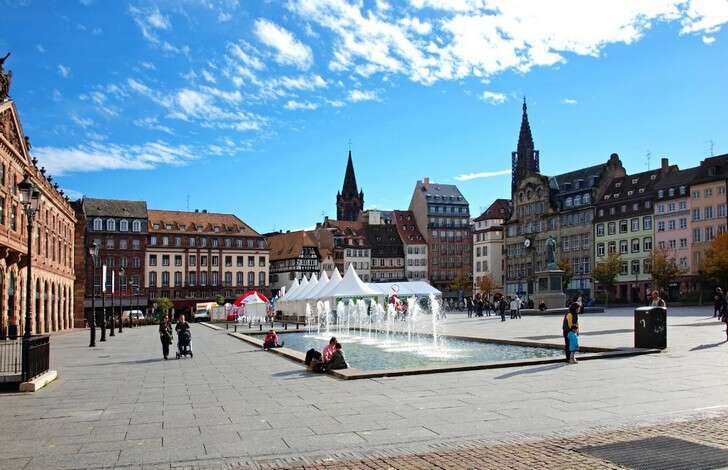 ● Place Gutenberg was named after Johannes Gutenberg, the world-famous inventor of the printing press. The monument to this ingenious typographer adorns the square. Place Gutenberg is one of the favorite places not only for tourists, but also for local residents. There are many excellent cafes, restaurants and shops. Flea markets are often placed around the monument. 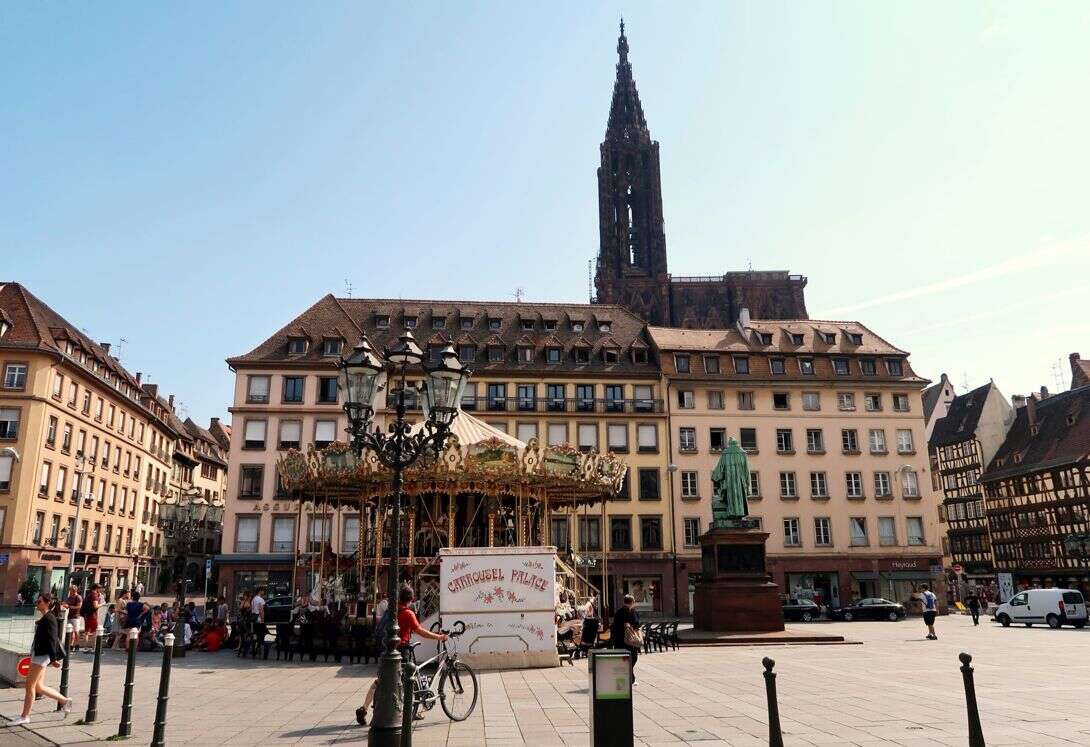 ● Maison Kammerzell is an architectural monument of the 15th century, one of the most picturesque representatives of late German Gothic. The facade of this half-timbered house consists of 75 windows with figured framing. They depict zodiac signs, mythological characters, scenes from the Bible, as well as images of human feelings. On the first and second floors of the building, there is an excellent restaurant, and on the upper floors, there is a small hotel with nine bedrooms. 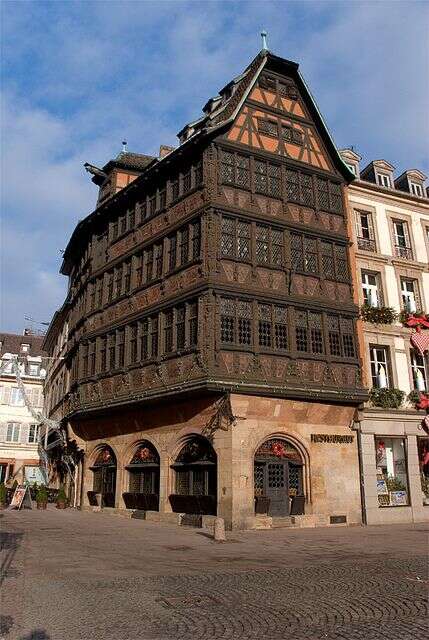 ● Cathédrale Notre Dame de Strasbourg is a visiting card of the city. The height of this Catholic Cathedral is 142 meters. Until the nineteenth century, it was considered the tallest building in the world. Thanks to its spire, the cathedral is visible from anywhere in the city. If you enter Notre Dame, inside the cathedral, you will see ancient astronomical clocks, they show not only time, but also month, year, zodiac sign, as well as the location of the planets. Entrance to the cathedral is free. We also recommend you to go up to the observation deck of the cathedral, which offers stunning views of Strasbourg. The ticket price for the observation deck is 8 euros. 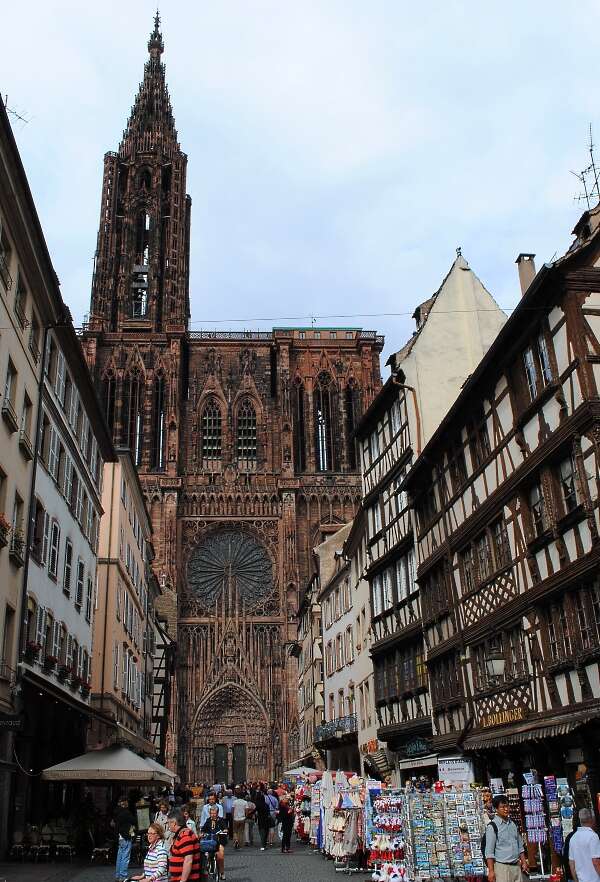 ● Palais Rohan was built in the XVIII century. This three-sided building stands on the banks of the Ile River. The university was in the palace from 1872 to 1892, and it became the residence of the municipal museums of Strasbourg in 1898. The palace houses three museums now: the Archaeological Museum, the Museum of Fine Arts and the Museum of Decorative Arts.

Entrance fee: 7 euros (one museum). You can visit the museums for free on the first Sunday of each month. 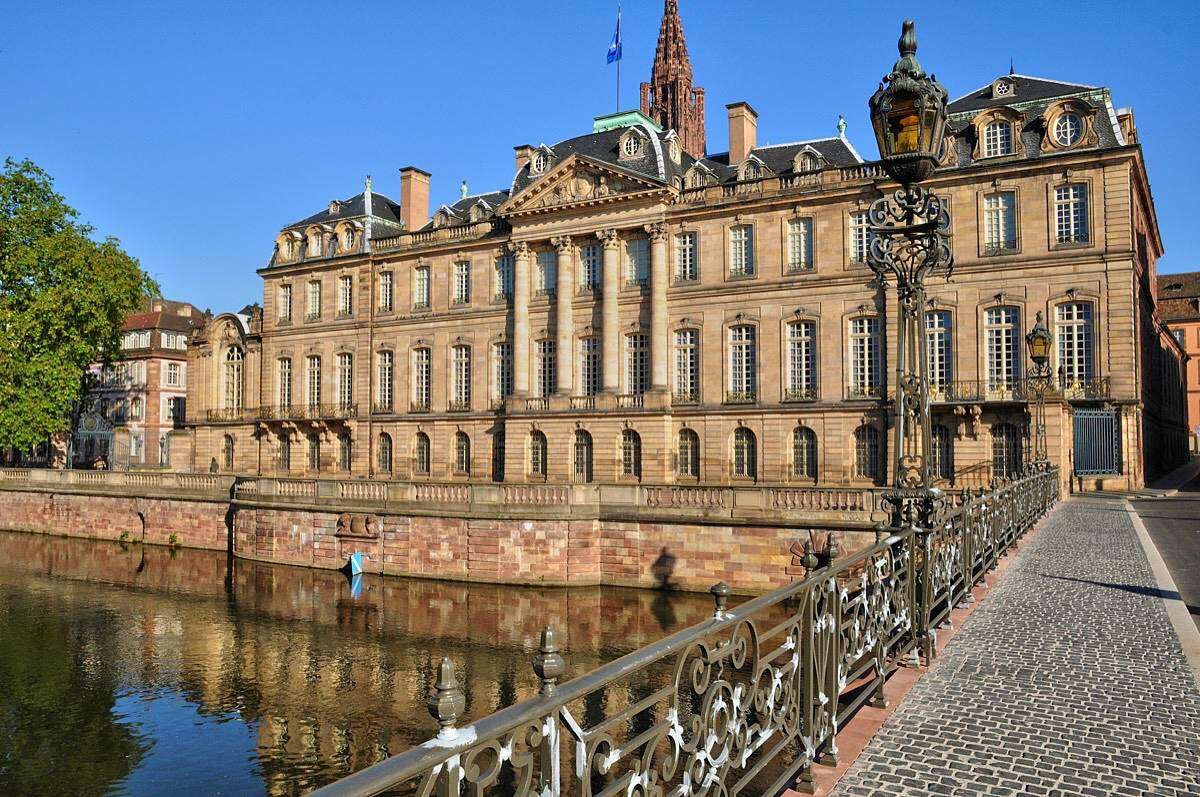 ● Place de la République is located on the border between the historical and the new part of the city. The square is surrounded by five buildings with historical monuments. These are the Parliament of Alsace-Lorraine (now the National Theater of Strasbourg), the Palace of the Emperor (now the Palais du Rhin), which is a mixture of different architectural styles, the National and University Library, the Grand Est and Lower Rhine Prefecture, and also the tax center Hôtel des impôts.

We advise you to visit this square, as it is located in the heart of the German Quarter. And this is, if not the only, then certainly one of the last remaining examples of amazing German architecture. Other examples, unfortunately, were destroyed during the Second World War. 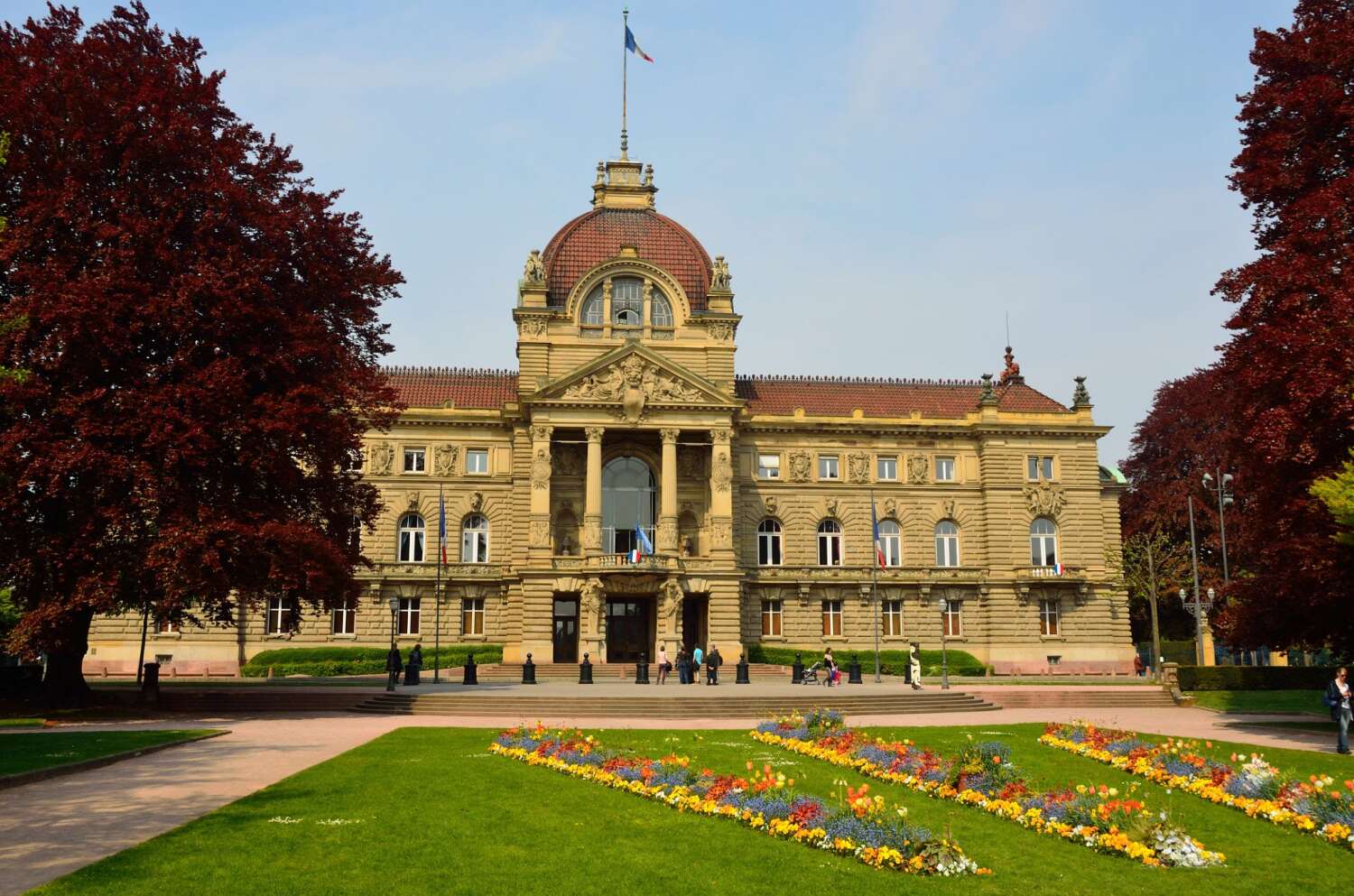 In addition to these attractions, we definitely recommend a walk along the canals on the river bus. You must admit that this is a rather romantic and memorable way of exploring the incredible Strasbourg. A boat tour is a great opportunity to see all the sights of the city from a new angle. The cost of such a trip will be 10 euros. 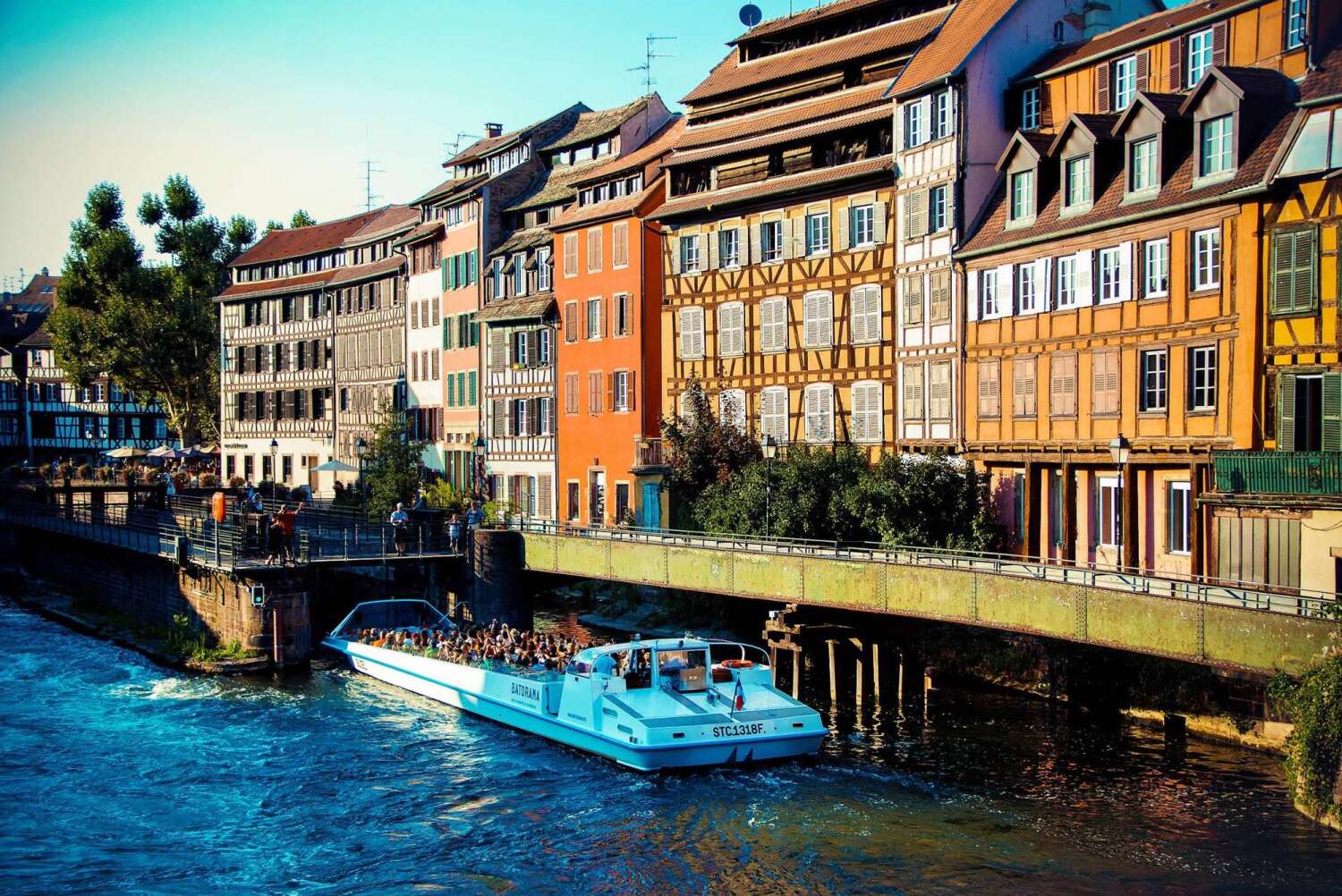 Strasbourg is multifaceted: for someone, it will be enough just to get to know it for one or two days, and someone will see its diversity of parks and museums and want to stay here longer. The only thing that absolutely all travelers will bring along when leaving this city is an unforgettable delight and vivid emotions, as well as full confidence that that fabulous magical city from a children's book definitely exists, and it could easily be called Strasbourg.