The Contrasts Of Istanbul: What To See In The City On The Bosphorus

Many people have heard the phrase "Istanbul, the City of Contrasts", but what exactly are these contrasts? How is the Grand Bazaar different from the Spice Bazaar? What is more beautiful - Hagia Sophia or Topkapi Palace? Where is it better to walk - in the European or Asian part of the city? Istanbul offers dozens of choices at every turn, but why choose if you can see everything at once? By the way, did you know that Istanbul is not the capital of Turkey?

Palaces and mosques of Sultanahmed

If you look at the map, the scale of Istanbul is scary. But, fortunately for tourists, most of the attractions of this multi-million megalopolis are concentrated in the center. And it is best to start acquaintance with the city in the area of Sultanahmed Square. 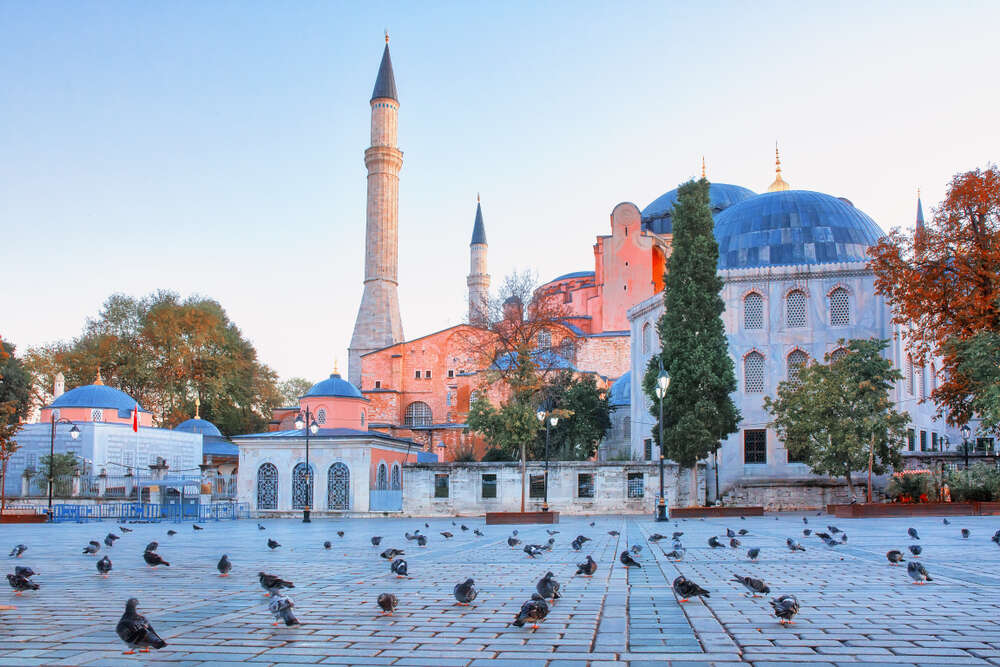 Once in the center of Sultanahmed, it is no wonder that you would want to go in all directions at once. The walls of the Topkapi Palace, the ancient residence of the Turkish Sultans, rise on the edge of the main square of the city. The palace has a cozy green park, a Sultan's mosque, a harem, the tiles on the walls of which can be viewed for hours, and a library. It is worth coming to the palace early in the morning, until it is hot and there are no crowds of tourists, and you should spare at least half a day to examine it thoughtfully. Entrance price is € 14, you will have to pay another € 10 for visiting the harem. 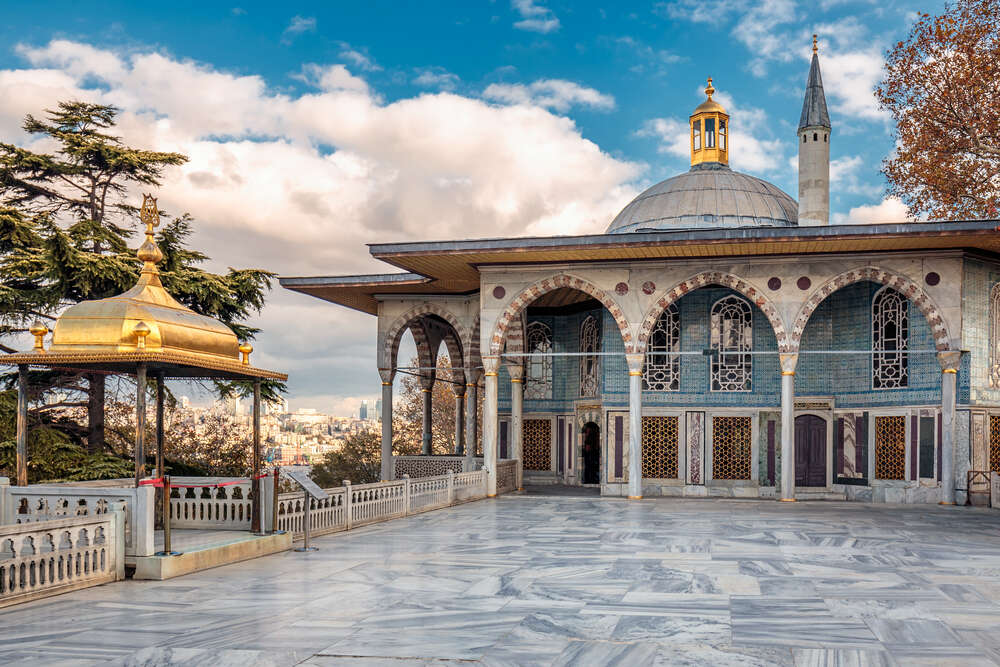 Near the palace, the minarets of Hagia Sophia pierce the sky. This mosque has a complicated history - until the Turks conquered Constantinople, it used to be a cathedral, then minarets were added to the cathedral and retrofitted according to the canons of Islam, and now, it is a museum. 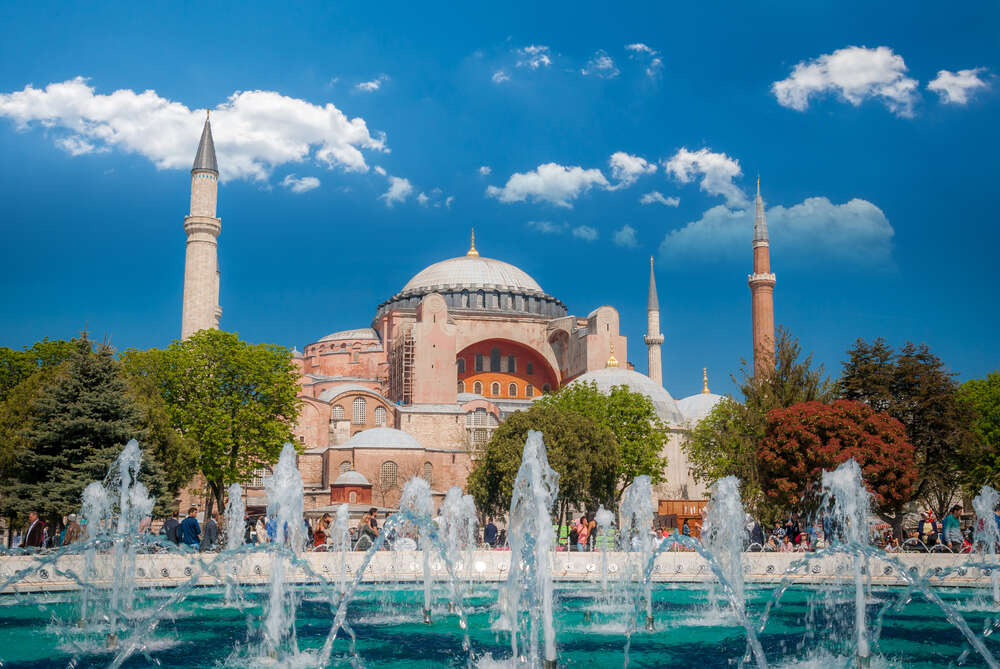 Strolling inside Hagia Sophia, do not forget to look up, the painting of the dome causes delight and awe. But first, you will have to stand in line, as there are too many people who want to admire the interior of the former mosque, even in low season. Tickets cost € 9. 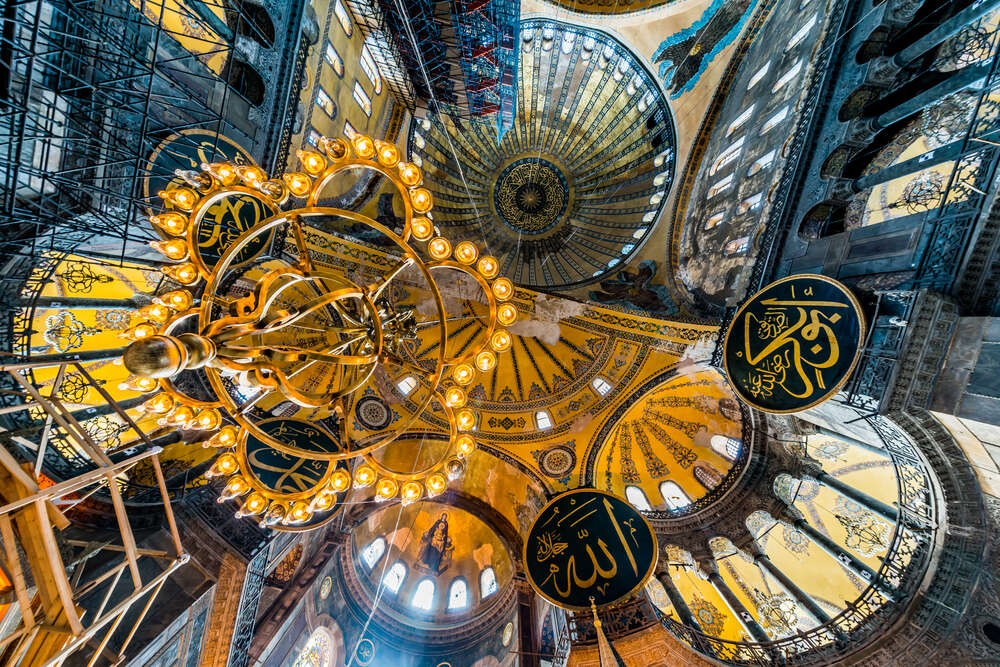 If after exploring these two attractions you still have energy, then on the same day, you can look into the Blue Mosque. Unlike Hagia Sophia, it is active, so women need to cover their heads, shoulders and knees. Admission is free, but you can only enter the prayer hall at certain hours so as not to distract true believers from prayer. You can enter the courtyard of the mosque from morning to evening. 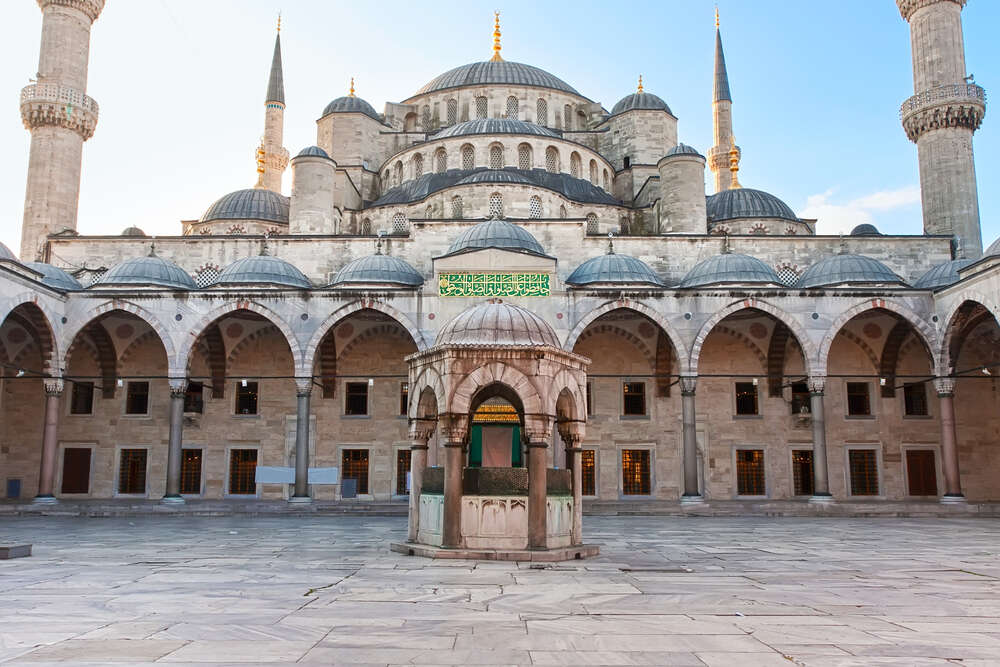 And the last (but not less important) symbolic place in the area of Sultanahmed is Basilica Cistern. The underground reservoir, built during the time of Emperor Constantine, is amazing. Entrance costs € 4,5. 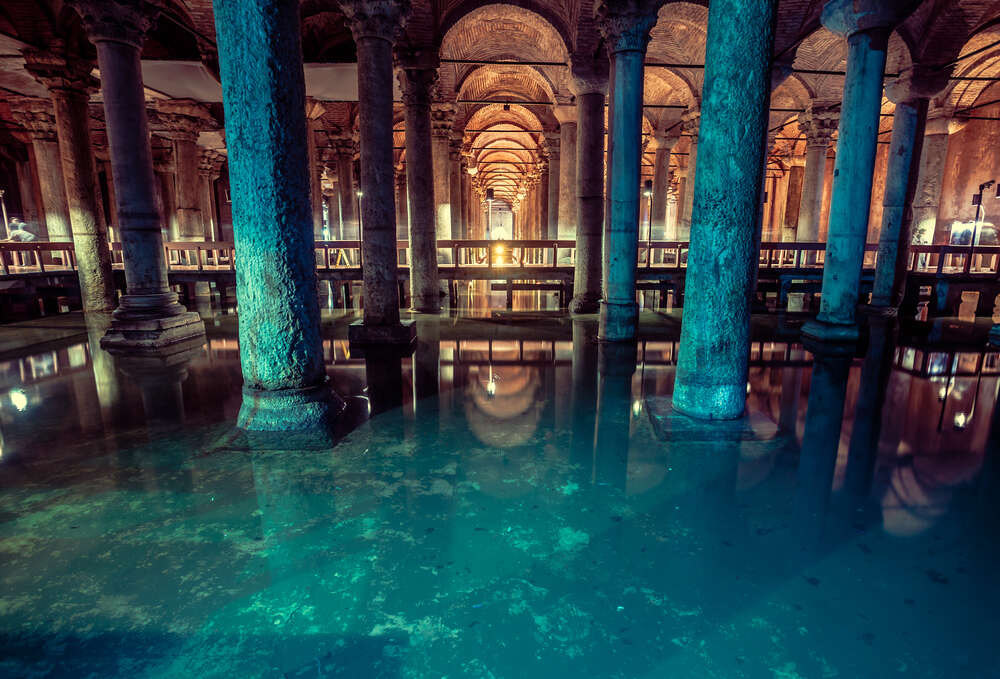 Even a cursory examination of all these sights can make you very hungry. You can satisfy your huger on Divai Yolu Street adjacent to Sultanahmed or in numerous streets south of the Blue Mosque. Many cozy family cafes are hidden in their almost medieval interweaving. Many of them have roof terraces with a magnificent view of the waters of the Sea of Marmara. 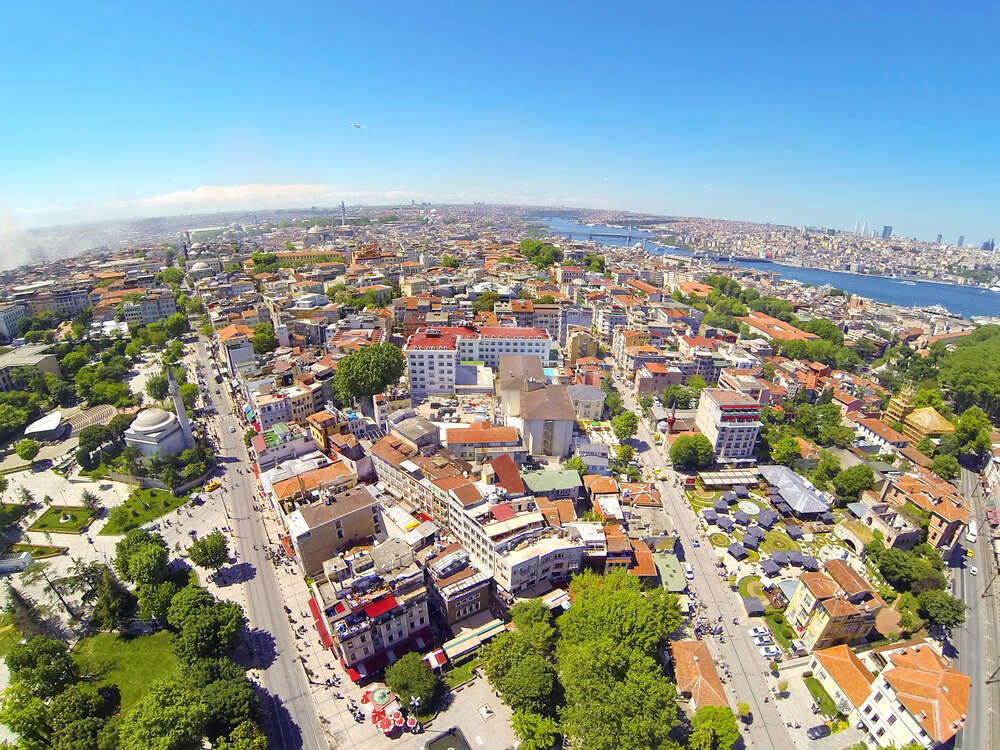 Taksim Square and Istiklal Avenue are the heart of modern Istanbul. Here, life is always in full swing, cafes and stalls with street food mess with your eyes, and you can easily leave your entire salary in local stores. 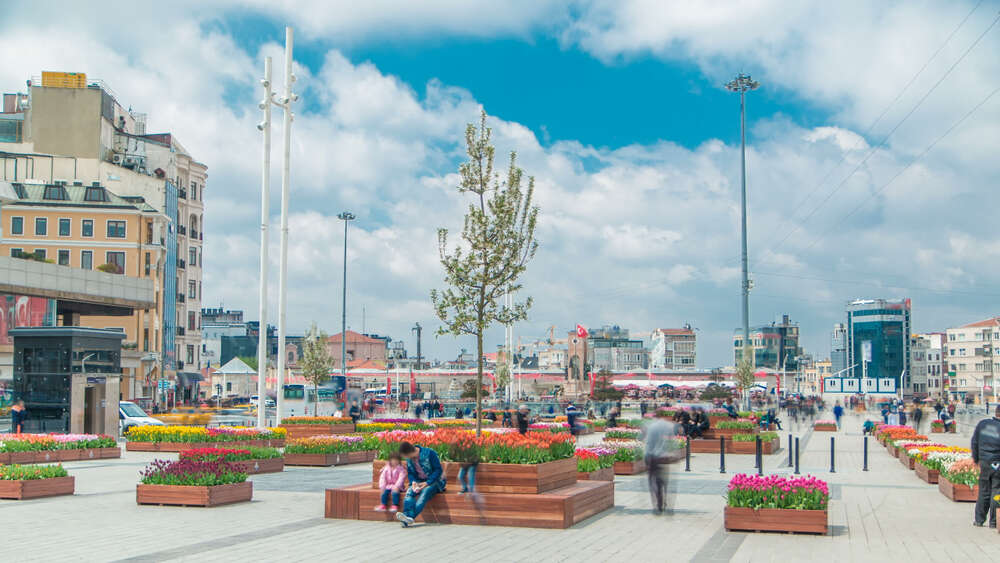 What must be done on Taksim and Istiklal? Take a pen and write it down.

- Treat yourself to food from a stall. It can be a traditional Turkish kebab, bagel simit, mussels with rice and lemon juice. For € 1, you can buy a glass of fresh orange juice, and the sellers of ice cream, which is called dondurma, will put on a show for you. The food should be washed down with strong Turkish coffee or no less strong tea, which is served in small glasses and is called bardak tea. 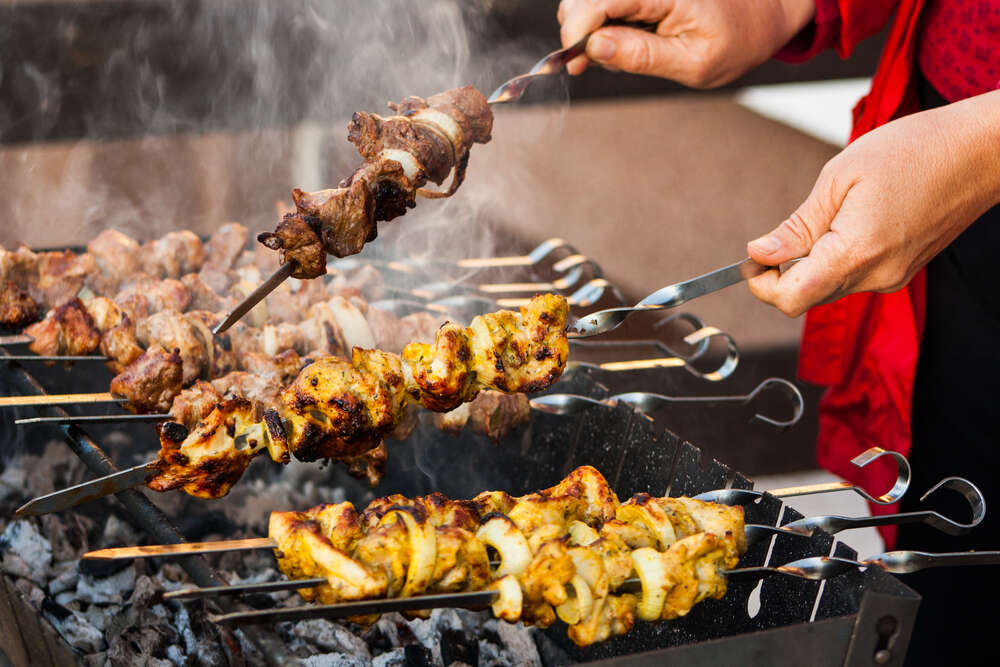 - Take a ride on the tram. Istiklal is a pedestrian street, but once every half-hour, a red retro tram runs along it with a cheerful ringing. You can be an adult and a conscious tourist, pay for the fare and ride inside the tram. Or you can look back at your childhood and jump on the bandwagon on the go to ride a little stowaway. The tram runs slowly, so it's safe. 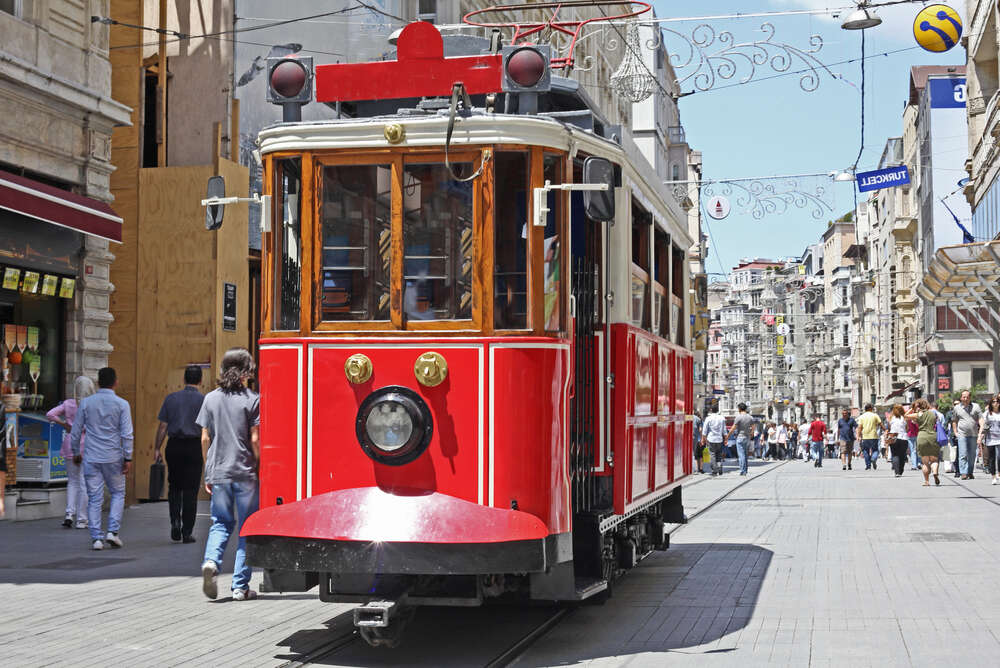 - Buy Turkish sweets. Dozens of types of baklava, Turkish delight and other sweets can be tasted even if you don’t buy anything. Walking around Istiklal, get ready for the fact that a merchant from each store will come to you with a tray offering you sweets and a glass of tea. 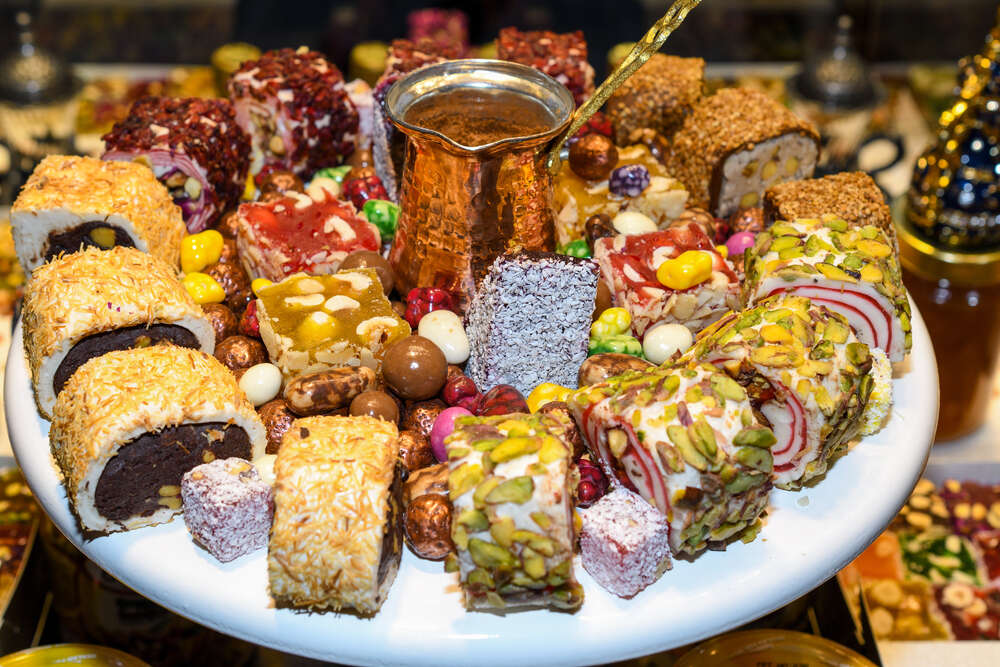 Smoke a hookah. There are a lot of hookahs in Istanbul in any area of the city, and they know how to make hookah here. One serving of fragrant tobacco can be smoked for a couple of hours, the smoke does not tear your throat, and it’s very convenient to watch the city bustle from the cozy twilight in a hookah lounge. 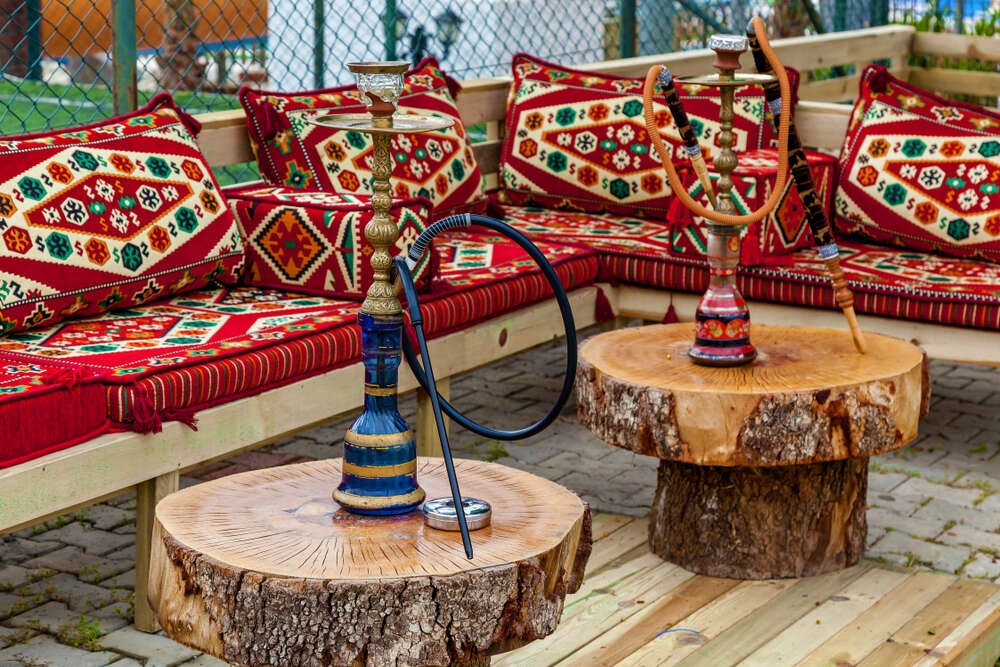 - Pet the cat. Or at least take a picture of one. Istanbul is a city of cats, there are a lot of them, and everyone seems so well-groomed and happy with life that you might want to take an example from them. 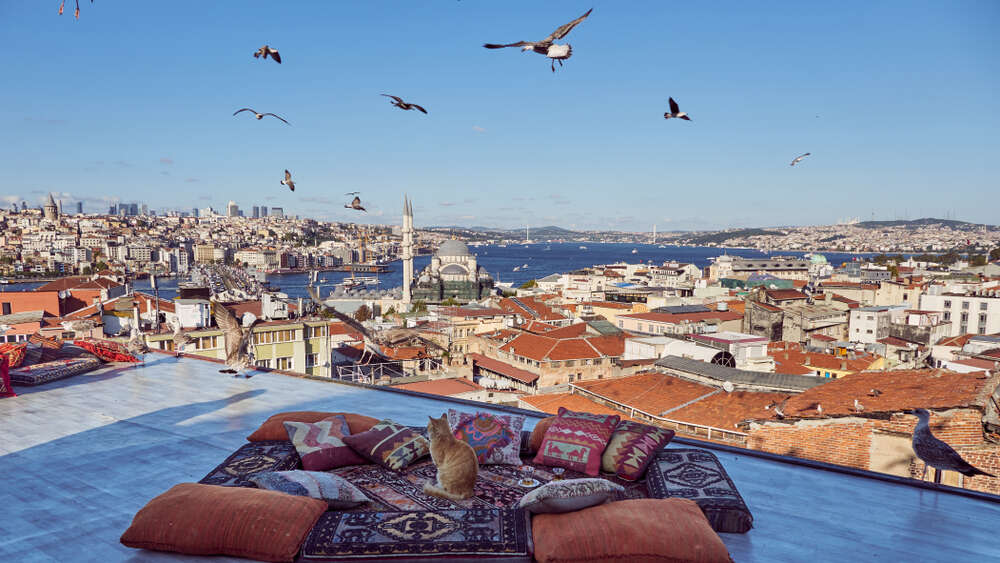 If you go down Istiklal Street to the embankment, you can see Dolmabahce Palace, which in its architecture is more similar to the royal palaces of Peterhof than to traditional Turkish buildings.

There are no fewer bazaars and markets of all sizes and types in Istanbul than mosques, but two of them are of particular interest to tourists - the Grand Bazaar and the Spice (Egyptian) Bazaar. 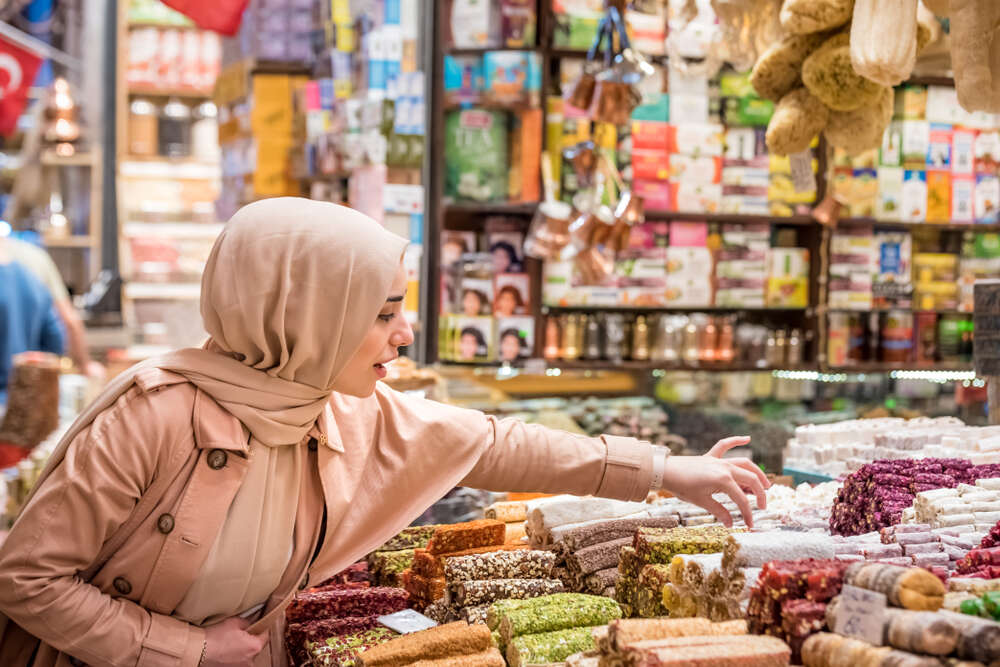 The Grand Bazaar is a hybrid of the modern European market with the traditional oriental one. Near shops with branded clothes or cheap consumer goods, there are stalls with hookahs, bronze lamps and jewelry. Admire the colorful Turkish lanterns, touch the carpets, taste nuts and sweets. When buying something, make sure to bargain, so the price can be reduced considerably, and the seller will not be offended, on the contrary, he will receive a lot of pleasure from the process. 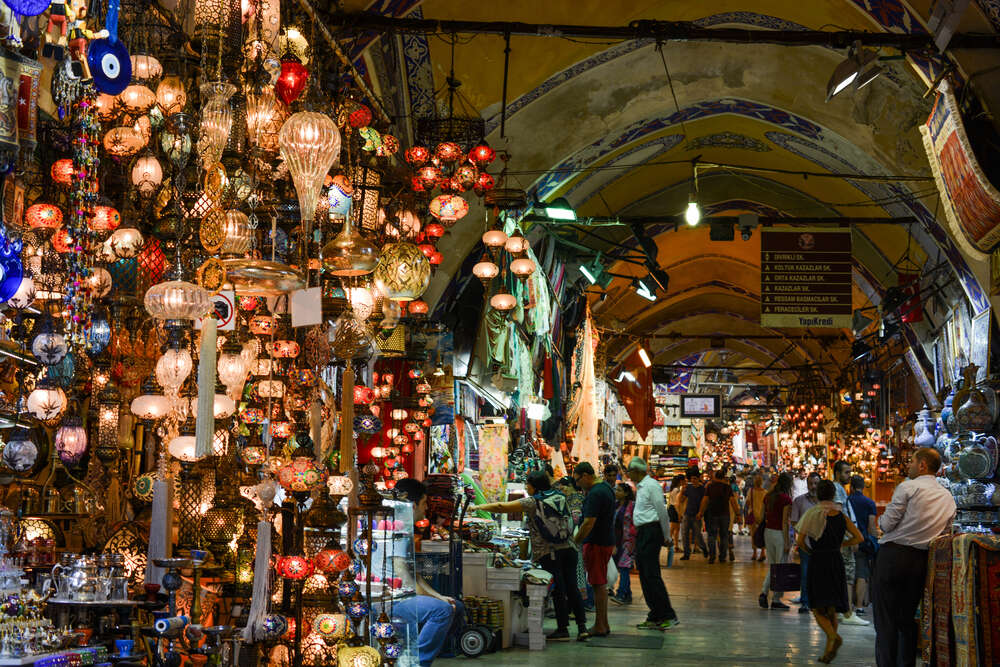 The Egyptian Bazaar is even more colorful than the Grand Bazaar. Mainly spices and fabrics are sold here, so during the walk, spicy aromas will tickle your nose, and a great variety of colors will delight your eyes. Do not hesitate to taste anything, it is a tradition in Turkey, and make sure to bargain for each purchase. You can eat your hearts out just like during walking along Istiklal Avenue. 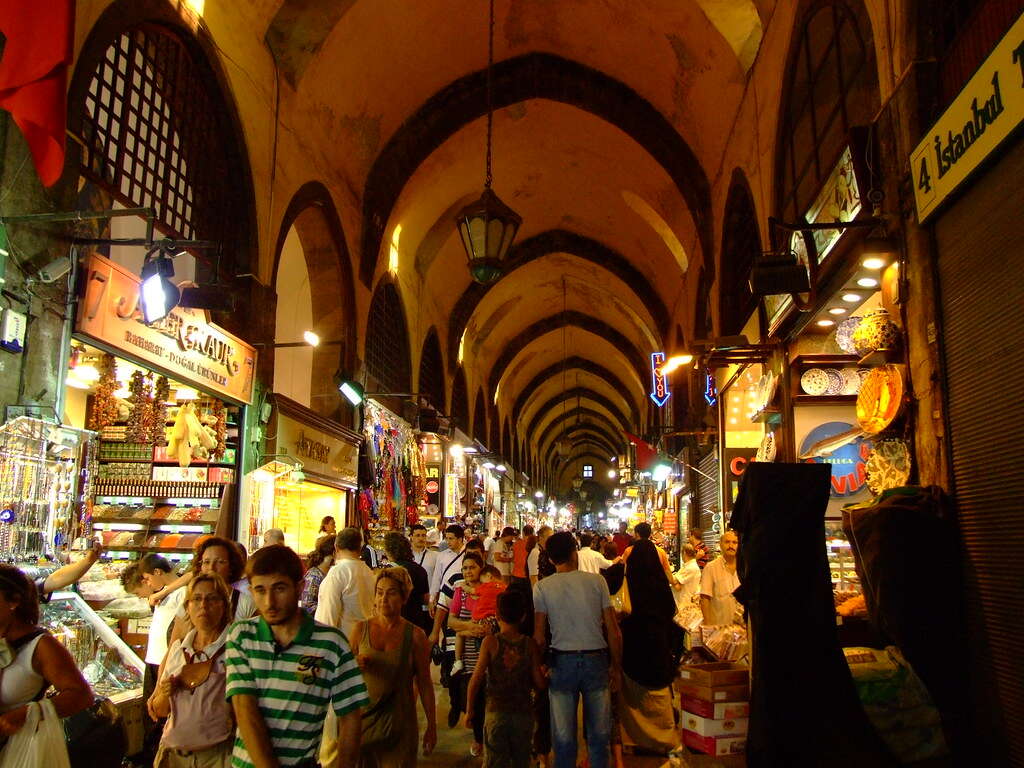 On the way among the bazaars, you can see two interesting mosques - Suleymaniye and the New Mosque.

Did the flavors of markets tease your appetite? Then get down to the Galata Bridge. Street food is sold on the embankment next to it, and on the bridge itself, there are dozens or even hundreds of fishermen who sell fresh catch to the numerous cafes and restaurants located on the lower level of the bridge. Make sure to try the national dish Balik Ekmek, grilled fish served in bread with vegetables. 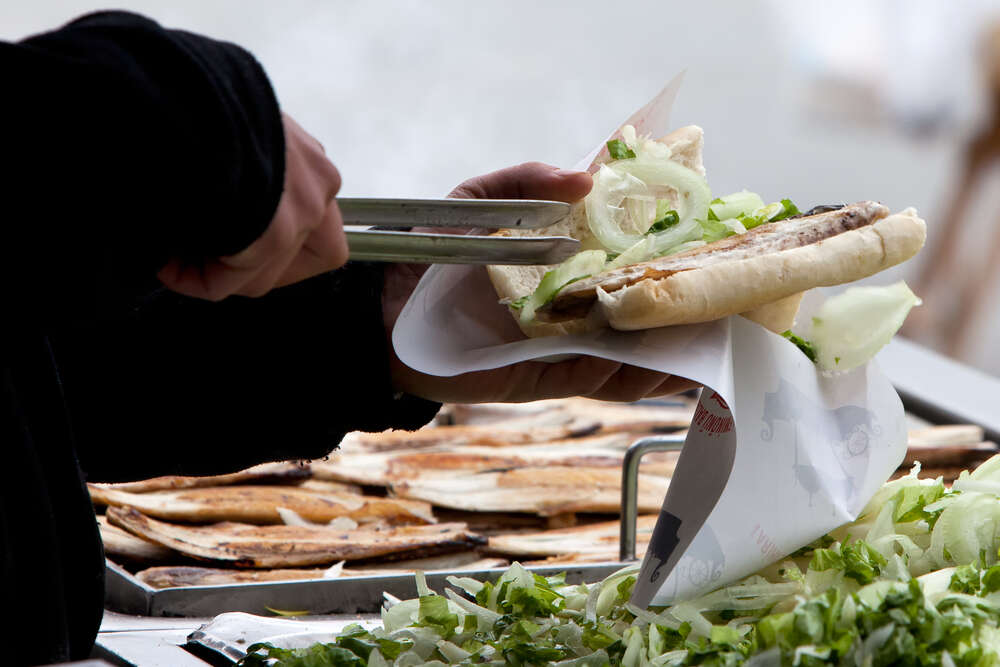 Near the bridge, you can see the Galata Tower, whose top offers a picturesque view of the center of Istanbul and the Bosphorus Bay. But be prepared for the line of entry and a long climb up a steep spiral staircase. Entrance to the tower costs € 5. 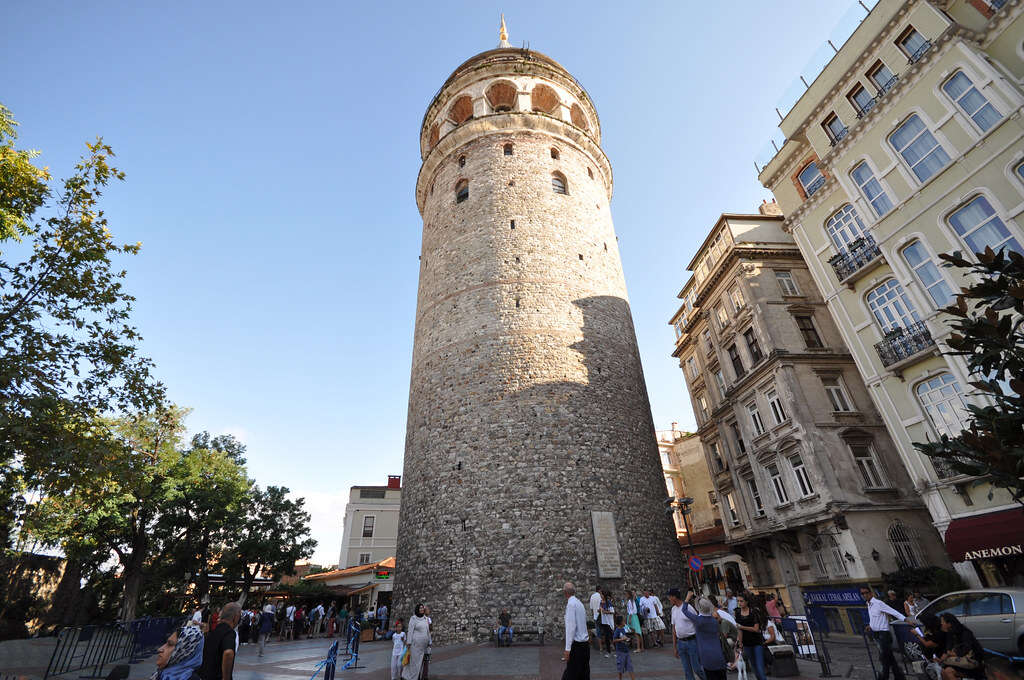 Near the Galata Bridge, you can take a small boat and go on a cruise along the Bosphorus. Or take a ferry to the Asian side of Istanbul. 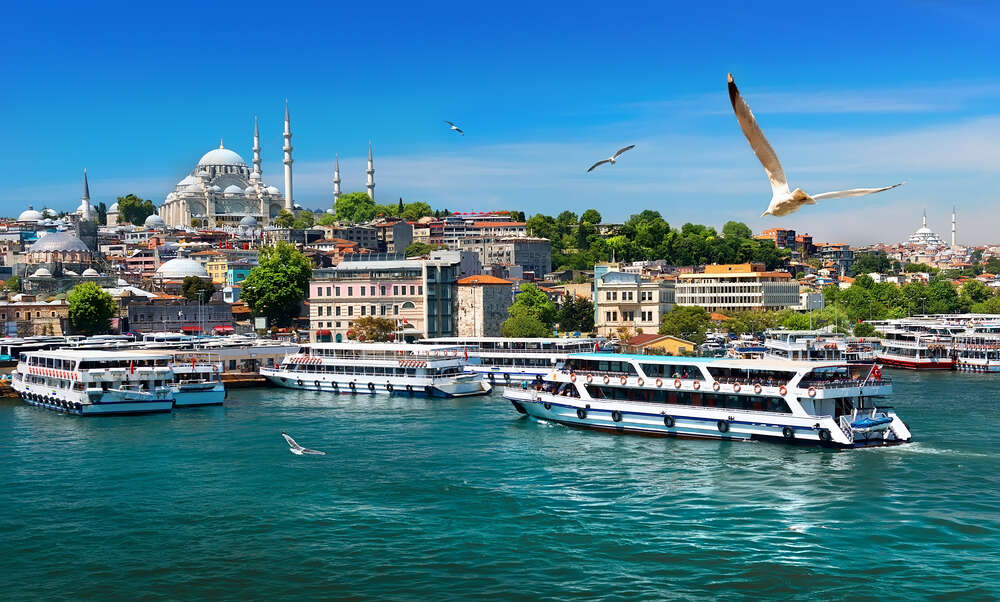 From Europe to Asia

Istanbul is a city located in Europe and Asia at the same time. Most of the popular attractions are located in the European part, but there are also interesting places in Asia. Walk along the streets of Uskudar district, one of the richest and the most pretentious of the city. Be pleasantly surprised by the European architecture of the Haydarpasa train station. Elbow your way through the crowds of locals in the streets of Kadikoy, the oldest district of Istanbul. And make sure to go to the fountain of Sultan Ahmed the Third, which is considered one of the symbols of Turkey. 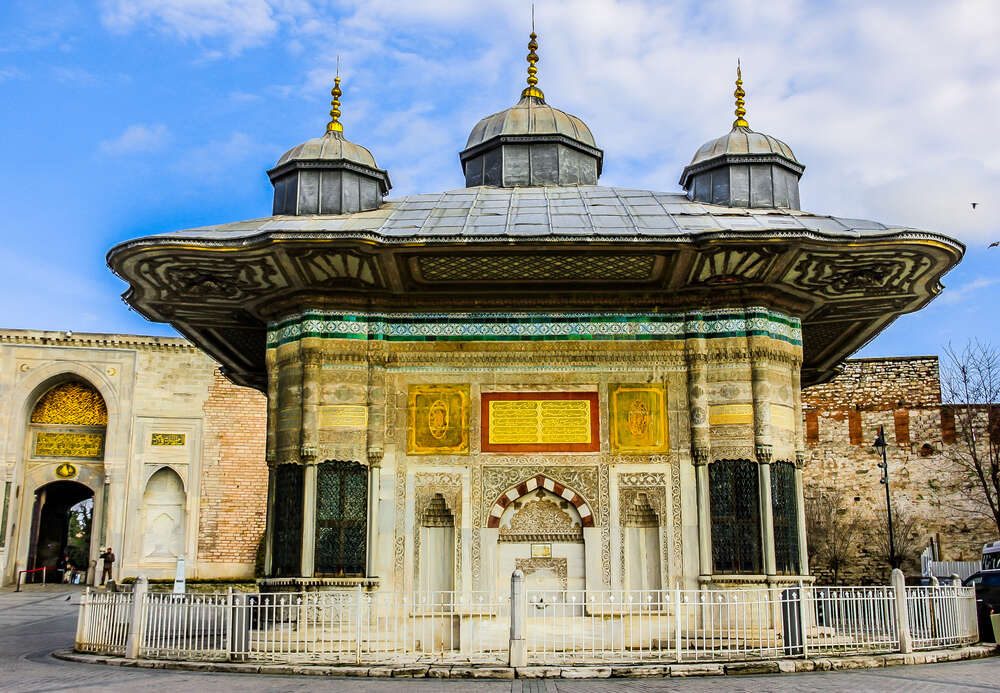 Also, the Asian part of Istanbul is worth visiting just for its atmosphere. There are far fewer tourists and fuss, here you can look at the not-best-looking part of local life, as well as have a nice meal for much less money than on the European tourist side. 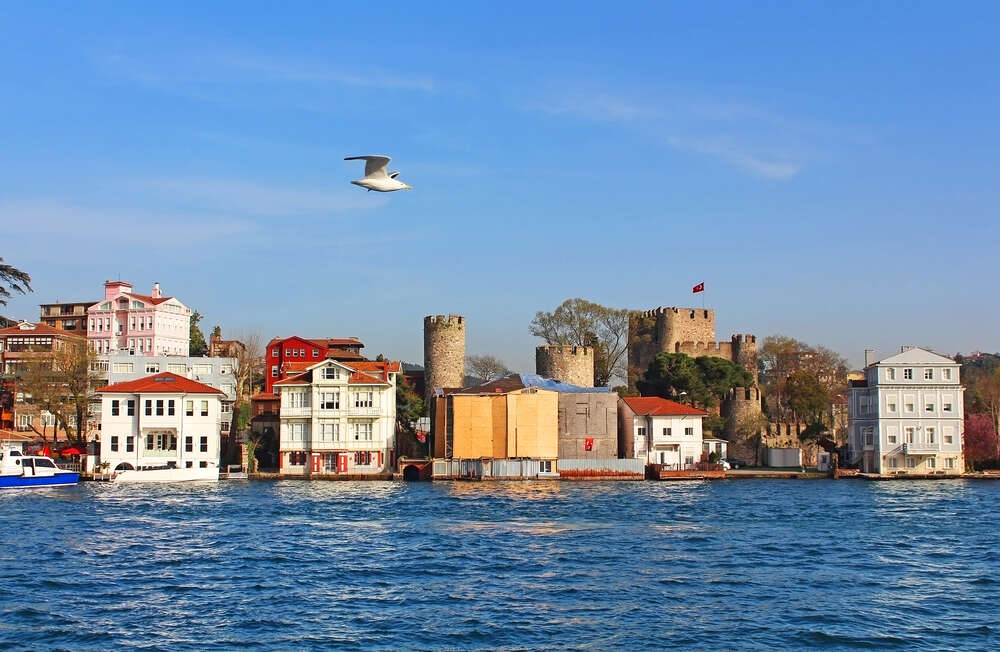 Ferries to the Asian part depart regularly from the Eminou pier, near the Galata bridge.

If you are tired of the eternal noise and crowds of Istanbul, then you can relax on the Princes' Islands. These are small pieces of land in the Sea of Marmara, to which ferry goes from the Kabatash pier. There are no attractions on the islands themselves, but observation platforms offer a magnificent view of the city. Speaking about buildings here, they are mostly private villas, there is almost no transport, and there are usually few people. 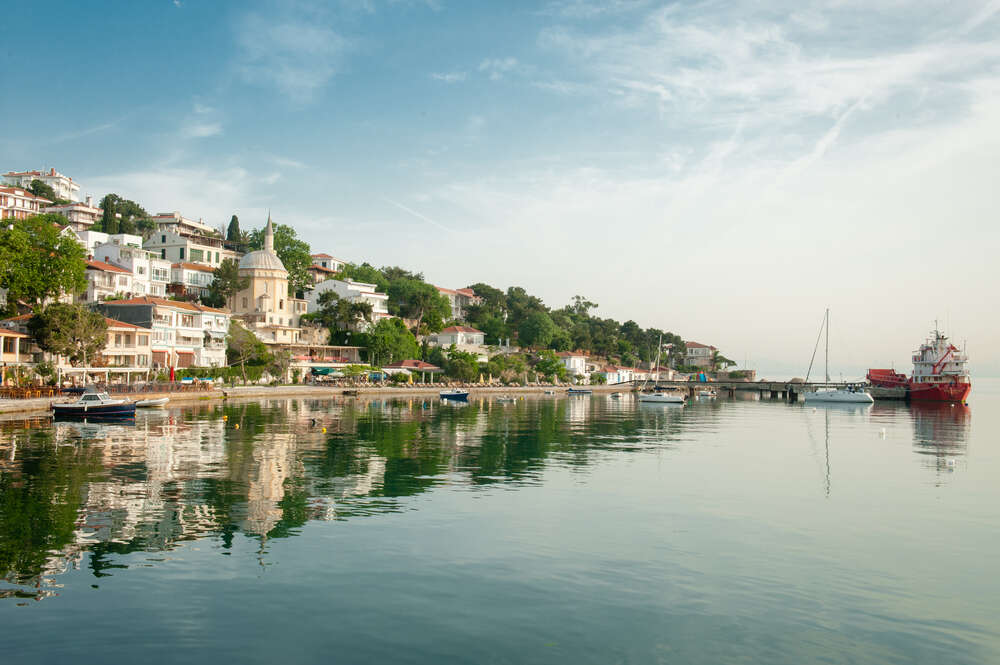 Another recreational option is to go to the beach. The most famous and popular beaches of Istanbul are Floria, Yesilkee, Jadebostan, as well as the suburban beaches of the Killos region. Please note that almost all beaches are paid here. 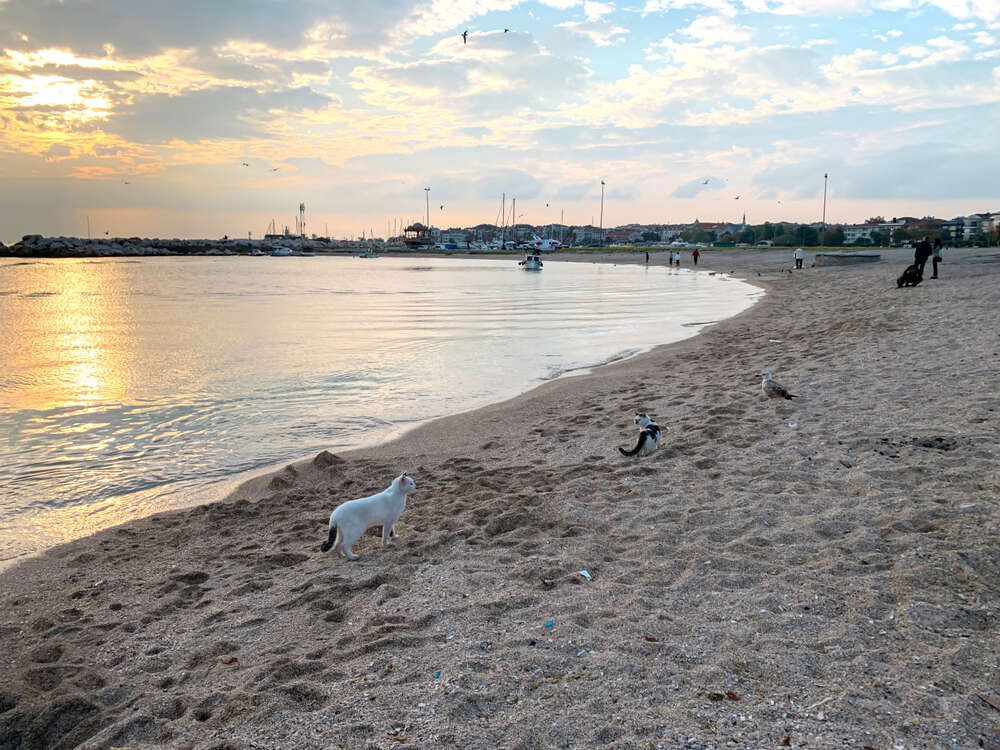 In Istanbul, you can spend a couple of unforgettable days, or you can live for several months, every day discovering new facets of this ancient city. Do not be afraid to deviate from the tourist routes marked on the maps, try unfamiliar dishes and do not forget to take pictures of cats.