I no naka no kawazu, taikai wo sirazu...

Contrary to what’s going in your mind, it’s not some gibberish. Rather, it’s the common Japanese phrase translating into, “a frog in a well never knows the vast ocean”.

This is to remind you that there is a whole world out there, waiting for you to explore. And one such unique country which beckons everyone with its quirks is Japan, the land of the rising sun.

Think wars, fires, storms, epidemics, crop failures, volcanic eruptions, tsunamis, earthquakes...it’s not a simple list of every manmade and natural disaster possible. Instead, this is a pinch of what all Japan has seen in its thousand years of history.

In fact, an average of 1,500 earthquakes still happen every year in Japan and this land has seen some of the deadliest earthquakes ever to rage on Earth, some with death tolls of more than 100,000 people. 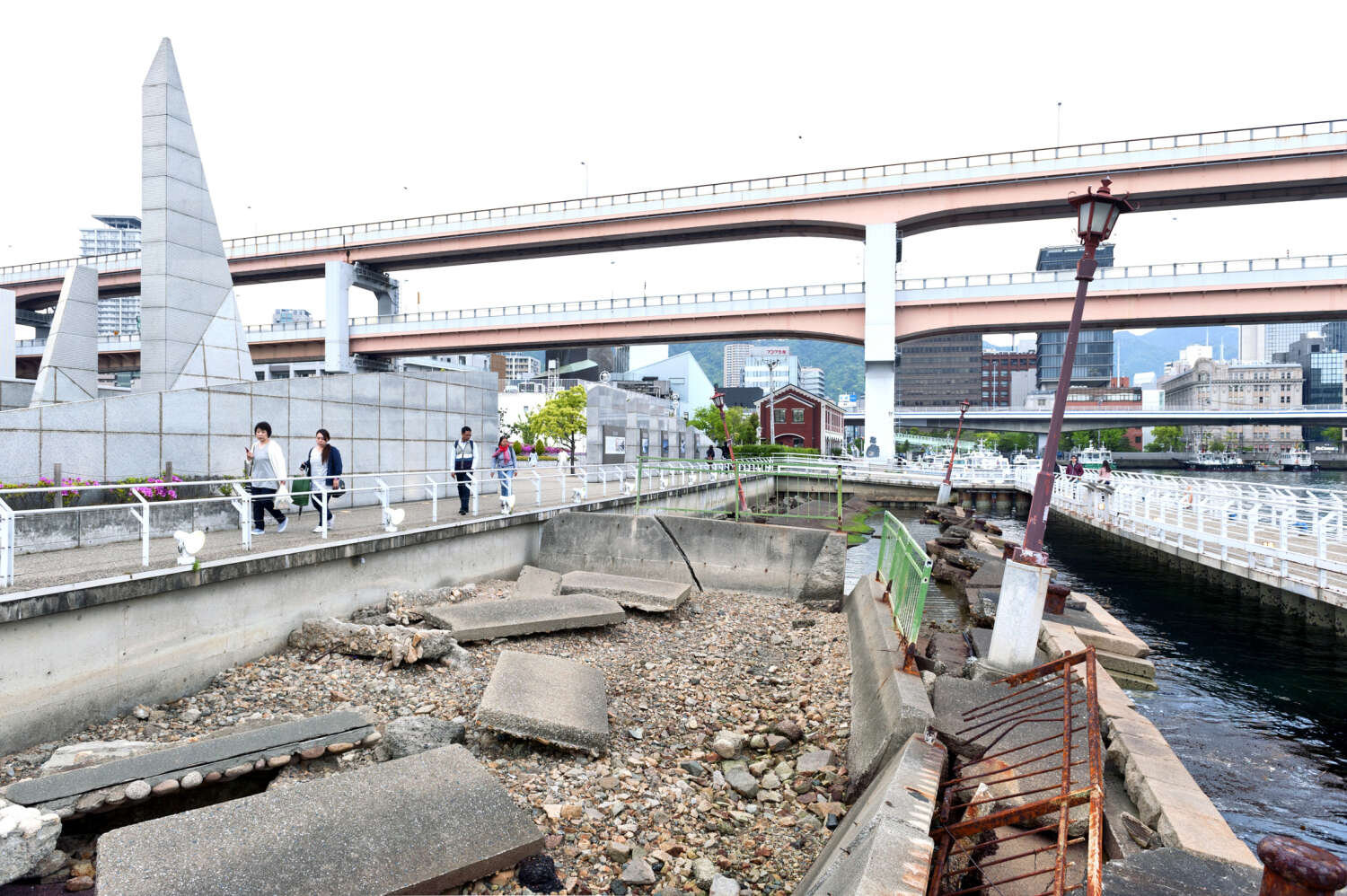 One would imagine that after going through so much, it would be very hard for any country to progress. Not in Japan’s case, which is less than a century surpassed all other European nations and established itself as the 3rd largest economy in the world.

But the journey to be one of the largest economies was not easy, rather was dotted with many queer events and people which makes the Japanese history a very interesting read.

For instance, many might have heard about the unique clan of warriors called ‘Samurais’, who are still one of the biggest highlights of Japanese history and culture. At one time in history, they were so many in number (almost 10% of the Japanese population), that it is assumed that every living Japanese person today has some percent of samurai DNA in them! 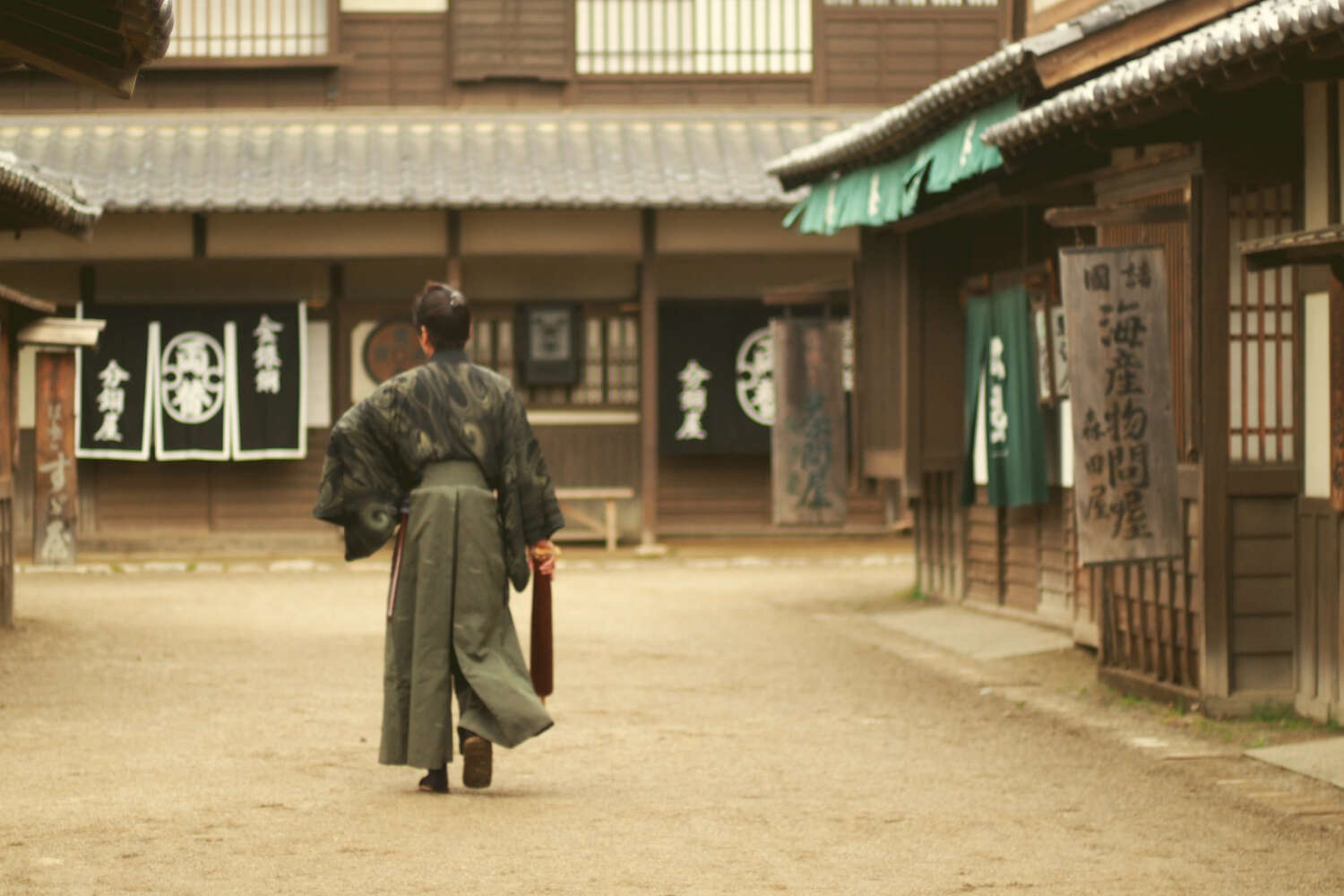 The weirdest fact, unlike the present-day Navy seals people compare them to, men of this warrior clan were actually quite petite.

In fact, the samurai in the 16th century (the period when they were the most prominent) were actually very slim and had an average height between 5’3” to 5’5”.

But don’t confuse their tiny stature for lack of power. Even 200 years after their period of prominence, i.e. in the 1800s, they were powerful enough that it was 76 samurais, who were chosen to go to New York city as diplomats.

If it seems highly unlikely, then go and check out the song, Tommy Polka. This number was named after the youngest samurai of that group, Tateishi Onojiro, who became somewhat of a national celebrity and came to be lovingly called Tommy in America.

Before Japan opened to the west around the 1850s or was forced open by the American Navy to be exact, there was a ‘one of a kind law’ in force in this country.

But what was so special about this law?

Thanks to this edict, created by the rulers of the Tokugawa period, Japan was completely cut-off from the world for more than 200 years. The shoguns (powerful warlords) appointed at that time made the sure...No foreign trade, No foreign travel for Japanese, No entry to foreigners and No Christianity. 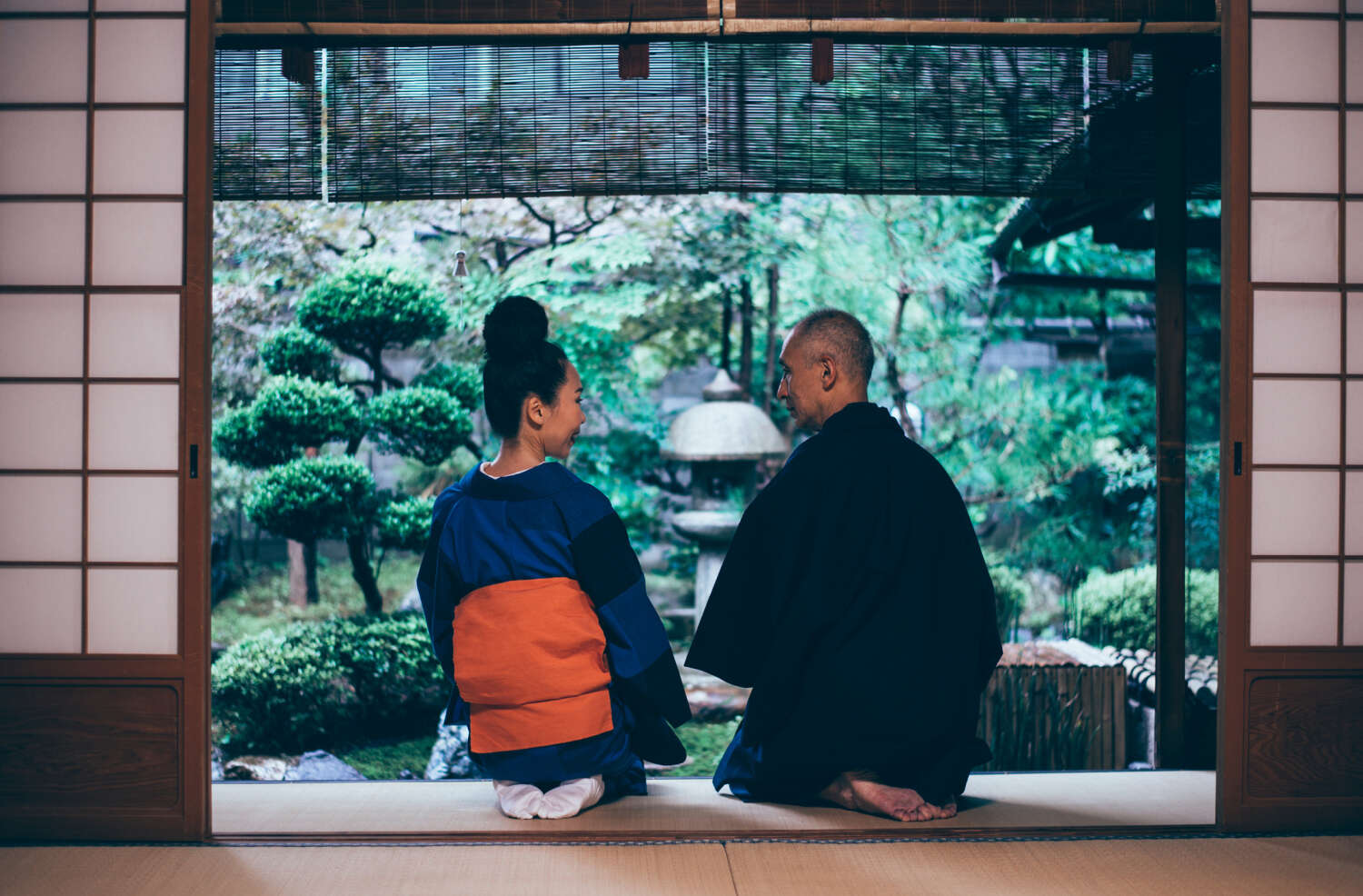 Like its geological form, Japan almost became a metaphorical island, alone in midst of a sea of surrounding nations. But, something good did come out of this bicentennial isolation; the unique culture of Japan.

Thanks to the extent of stabilization this period brought in the country, a distinctly urban environment developed, characterized by the ‘ubiquitous’ use of a garment known as kosode, the earlier ancestor of the well-known kimono.

Ubiquitous meant that EVERYBODY wore it, literally Everybody.

So, to distinguish between the prevalent classes at that time, like shoguns, samurais, the merchants, etc., the kosode developed into less of a dress and more in to a wearable Biodata. Based on the particular style, technique, colour, fabric and motif used in the kosode, anyone could read anyone’s status, lineage, economic position and many more details.

Imagine an interviewer reading your dress for knowing your background; not your CV. Weird, right?

This kosode, then came to be known as kimono, literally meaning, ‘a thing to wear’ in the following Meiji period; which also saw the spread of western dressing style in the Japanese culture. With more foreign influence, the western dresses became a norm, more for men than for women.

However, the biggest push for wearing western clothes came after the Great Kanto Earthquake of 1923.

The thing is that after the earthquake, most of the kimono wearers couldn't run fast because of its restricting style and ended up getting robbed!

Today, if one travels to Japan, they would see almost everyone clad in pants, shirts, skirts, tops and other western dresses, unless it is a traditional occasion or the wearer is a geisha.

Which brings us to another cultural identifier of Japan, the Geishas. 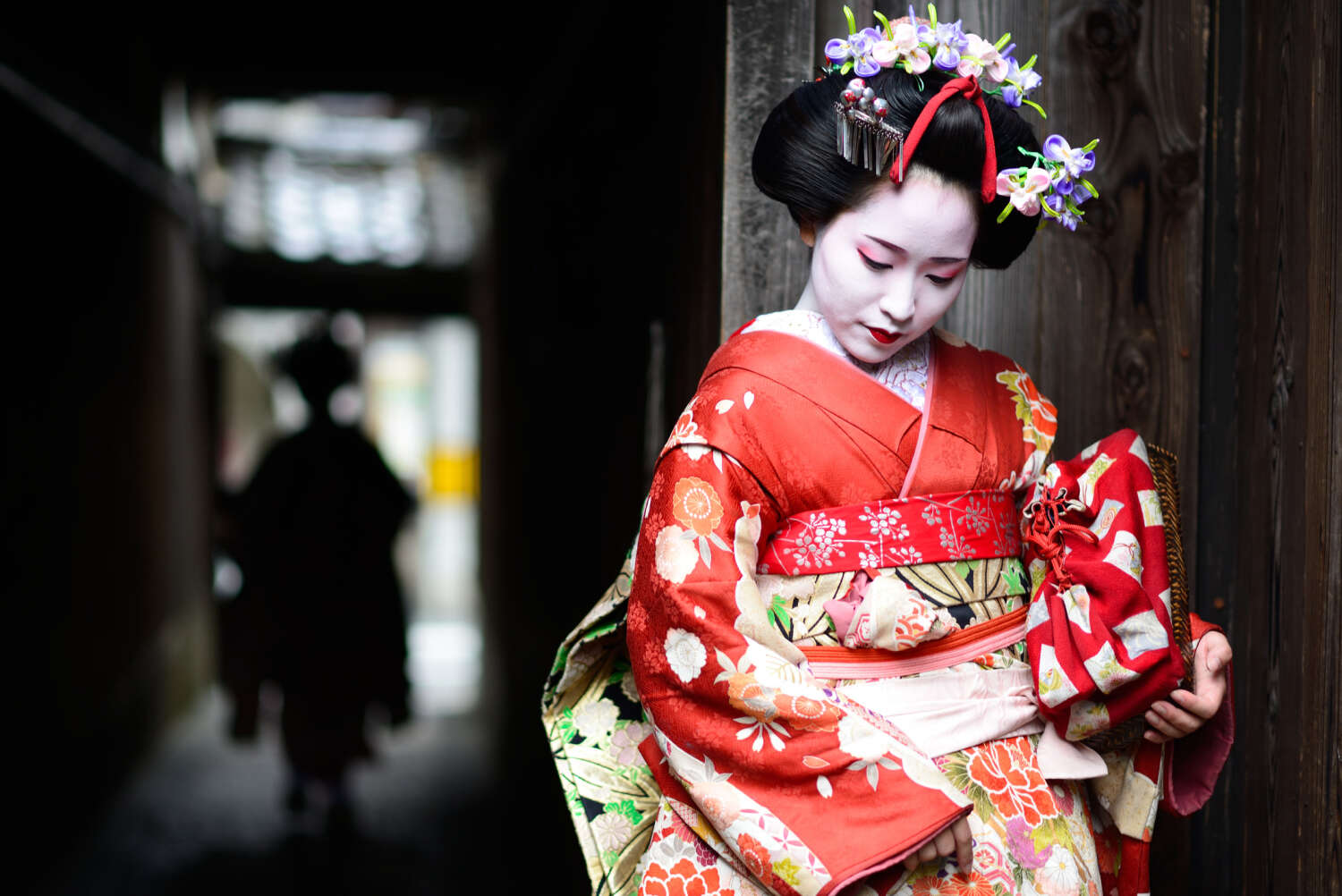 These iconic ladies are the living epitome of enthralling beauty, grace and how can we forget mystery. In fact, it is said that many of their gestures have a deep hidden meaning.

Apart from their white makeup (an ancient tradition to make their expressions more prominent), distinct hairstyles (which is actually a wig most of the times) and their kimonos (which can take as much as 3 years to manufacture) ...

if you ever find anyone with black painted teeth, understand that she is a meiko, an apprentice still learning the ropes of the geisha tradition.

Geishas, samurais, shoguns... these are not the only iconic figures that Japan has to offer. When one thinks of Japan, another picture that spontaneously floats before the eyes is of overweight men fighting in diapers, aka, sumo wrestlers.

How amusing some may find it, sumo wrestling is not just a sport, it’s a complete lifestyle; where a rikishi (wrestler) is supposed to eat, sleep, train and stay for the complete tenure of his career in a sumo stable until he gets married. 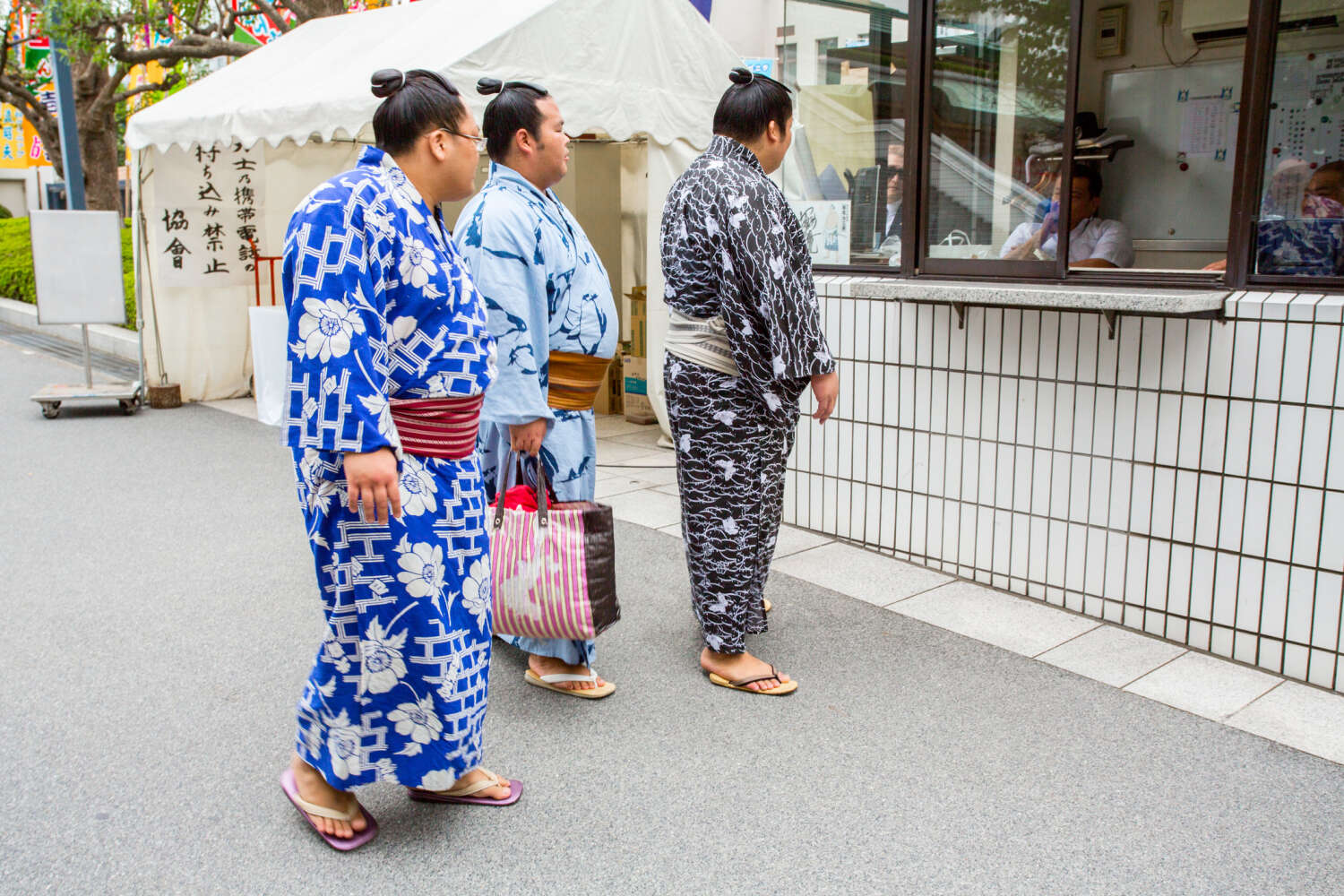 Their lifestyle, with its rigid rules and regimented routine, requires such an extent of dedication and discipline that it would put any military training to shame.

The lower-ranked rikishis have it the hardest here. They endure regular physical punishment and hazing to toughen their body and mind. These young men wake up the earliest, do all the cleaning and cooking, first bathe their seniors, thoroughly, then bathe themselves last and eat whatever is left after their seniors have gobbled up the food (which by the way is 20,000 calories a day for EACH).

Just imagine the amount that would have to be cooked for 15-20 such men?

All rikishis are banned from driving a car and have to keep their traditional top-knot hairstyle (chonmage) and wear the traditional dress all time in the public. Moreover, they can’t even act the way they like, since they are strictly demanded to be perpetually polite, self-effacing and expressionless.

No joyful expression on winning and no disappointed frown on losing!

For that matter, it’s not just these wrestlers that live a disciplined life, it’s the whole Japanese lot.

For instance, if you wish to teach your child to be hardworking, there is no better place for shifting than Japan. Here, it is a common practice for the white-collar employees to pull an all-nighter, so much so that sleeping at work, called as inemuri is encouraged as it seen a sign of exhaustion following a worker’s dedication. 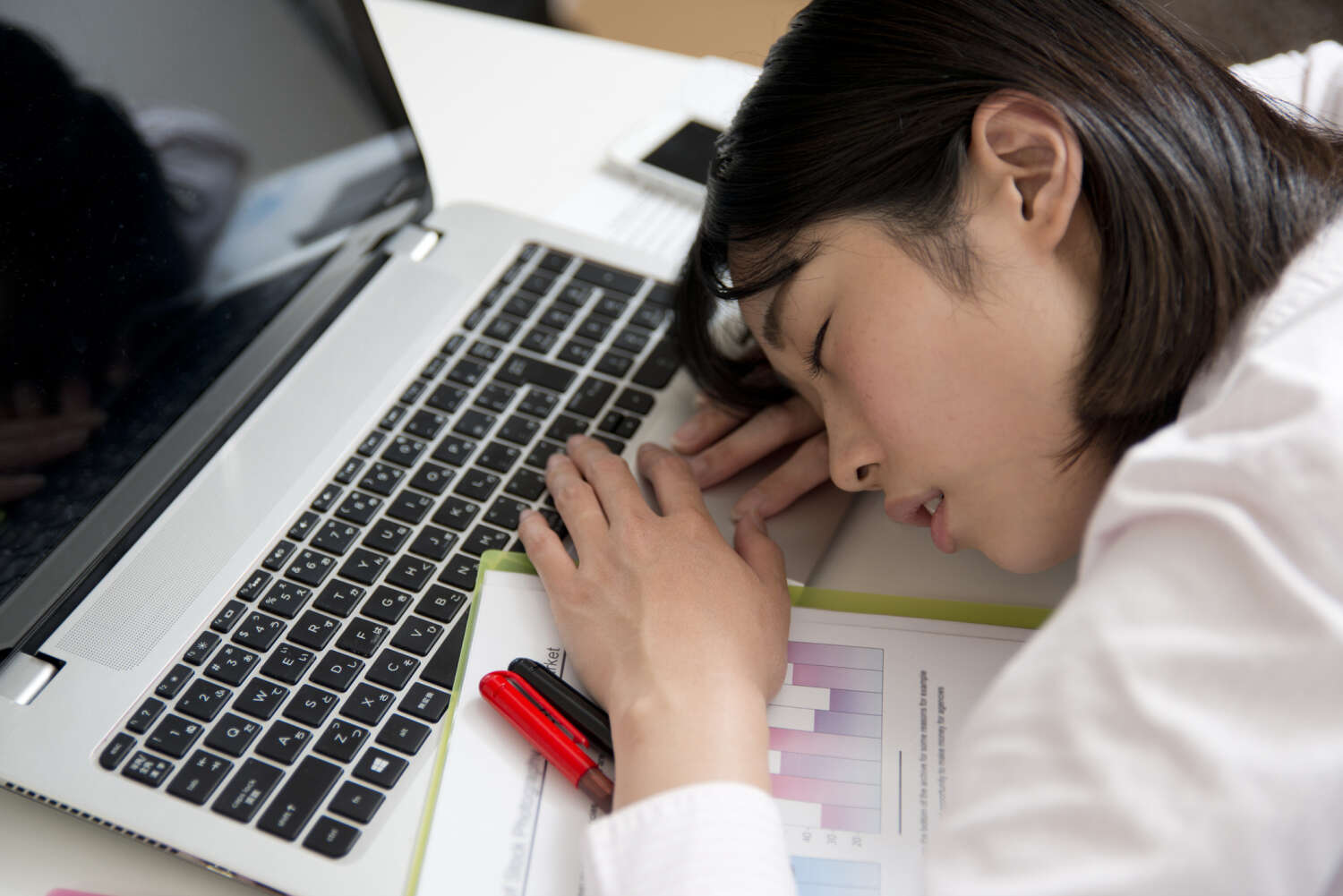 No wonders, this is the only culture where ''death from overwork'' is a legitimate word,Karōshi(過労死).

Maybe, on another thought, it’s not that good of an idea to shift to Japan!

But apart from the working culture, there are many more features that make Japan a wonderful country to stay, or at least, visit.

Take its crime rate, for instance, which is so low (2 gun-associated homicides a year), that it makes it the safest country in the world. The trains hardly get delayed, to the extent that in 2012, the avg. delay for Tokaido Shinkansen a measly 36 seconds.

It’s a paradise for pet-lovers, with the number of pets exceeding 12 million, a much greater number than the number of children under 12 years. They even have provisions if you start craving pet-hug midday, in the form of puppy and kitten cafes where you can cuddle with these cuties for a price of $8 per hour.

The best part, their nature. Japanese go out of their way to make others comfortable, cause the least amount of trouble and expect the same from others.

So, imagine what happens when someone disrupts a train by committing suicide in front of it?

What else? Their family is charged a disruption fee! 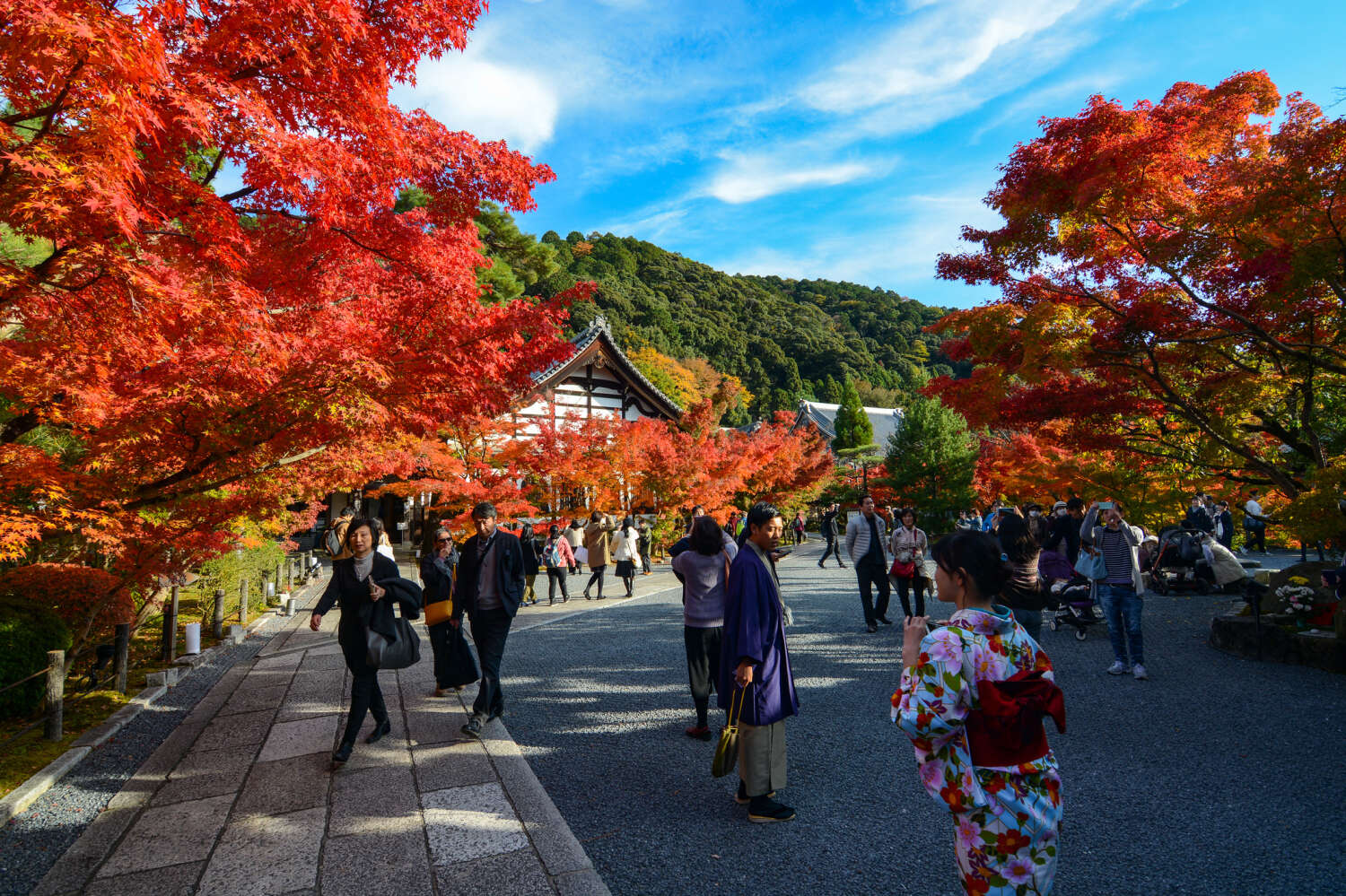 Beyond these, there are a plethora of other reasons which makes this quirky country one of the must-visit places in your bucket list. After all, as the Japanese like to say "ichigo ichie…" translating into ‘one opportunity one encounter’; you should definitely not miss any opportunity to visit this one of a kind country. After all, from history to people to culture, it promises some things which you wouldn't ever encounter any other place on Earth.