The Mystery Of The Steppe: Things to Do In Kazakhstan

The vast expanses of Kazakhstan are not only the steppe and the wind. In different parts of the country, you can find deep canyons, and blue lakes, and snow-capped mountains. Also, Kazakhstan has delicious cuisine and a unique culture, in general, there is a lot of sources of unforgettable impressions and vivid emotions during a vacation.

Take a walk among Nur-Sultan skyscrapers

Akmolinsk, Tselinograd, Astana ... Now, the capital of Kazakhstan is called Nur-Sultan, but the essence of the city has not changed, as the name did. This is a young metropolis, whose skyscrapers sharply contrast with the boundless steppe around, the heart of the country's business life, its showcase. Someone calls Nur-Sultan boring and soulless, but that's not true. Yes, the city does not have an ancient center and ancient monuments, but there are many modern and very interesting places. 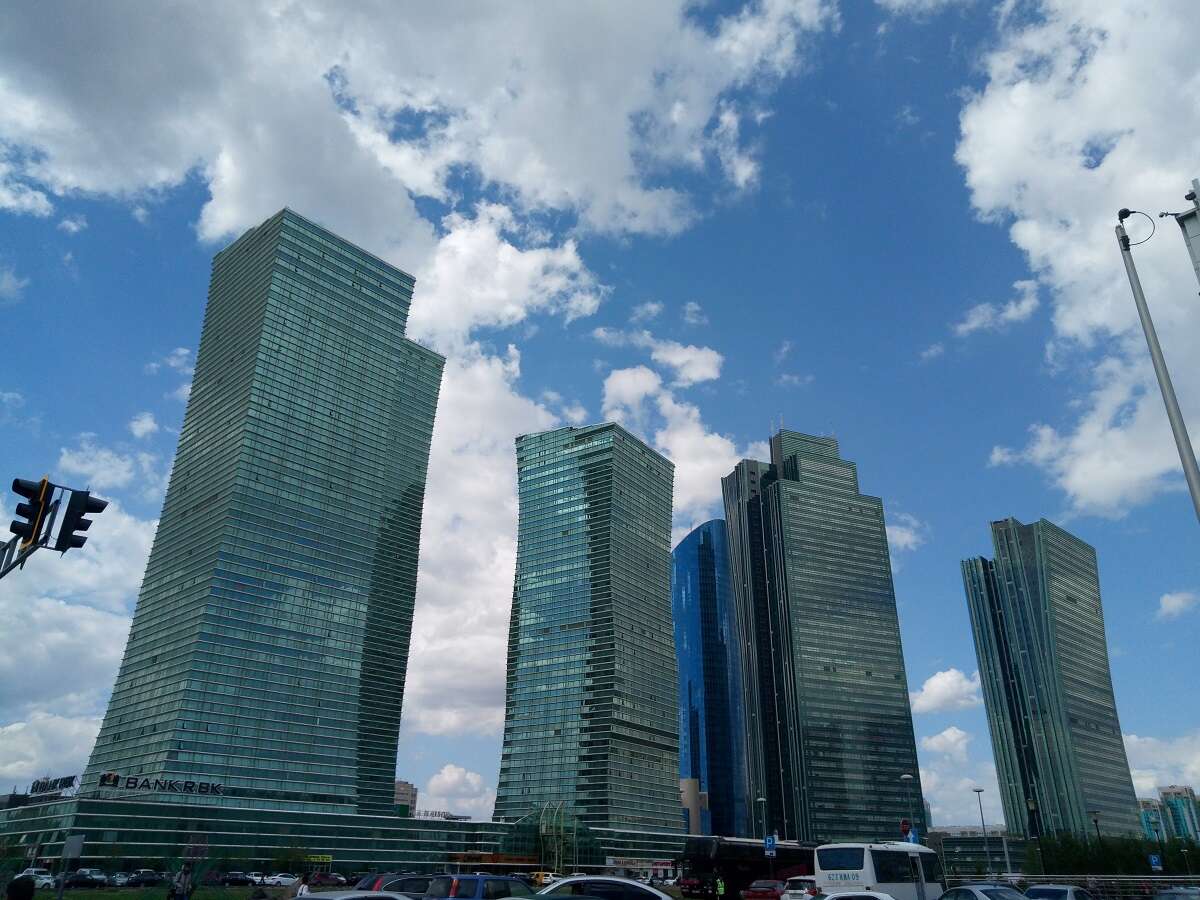 Start your acquaintance with the capital of Kazakhstan from Nurzhol Boulevard (Water-Green Boulevard), the central pedestrian street. It is here that the symbol of the country rises - the Bayterek Monument with an observation deck at the top of the golden ball. From here, you can walk for 5 minutes to administrative skyscrapers sparkling in the sun. At the other end, the pedestrian street stops on Khan Shatyr, the largest tent in the world and part-time shopping and entertainment center, which even has a beach. It is noteworthy that the sand for this beach is brought not from anywhere, but from the Maldives. 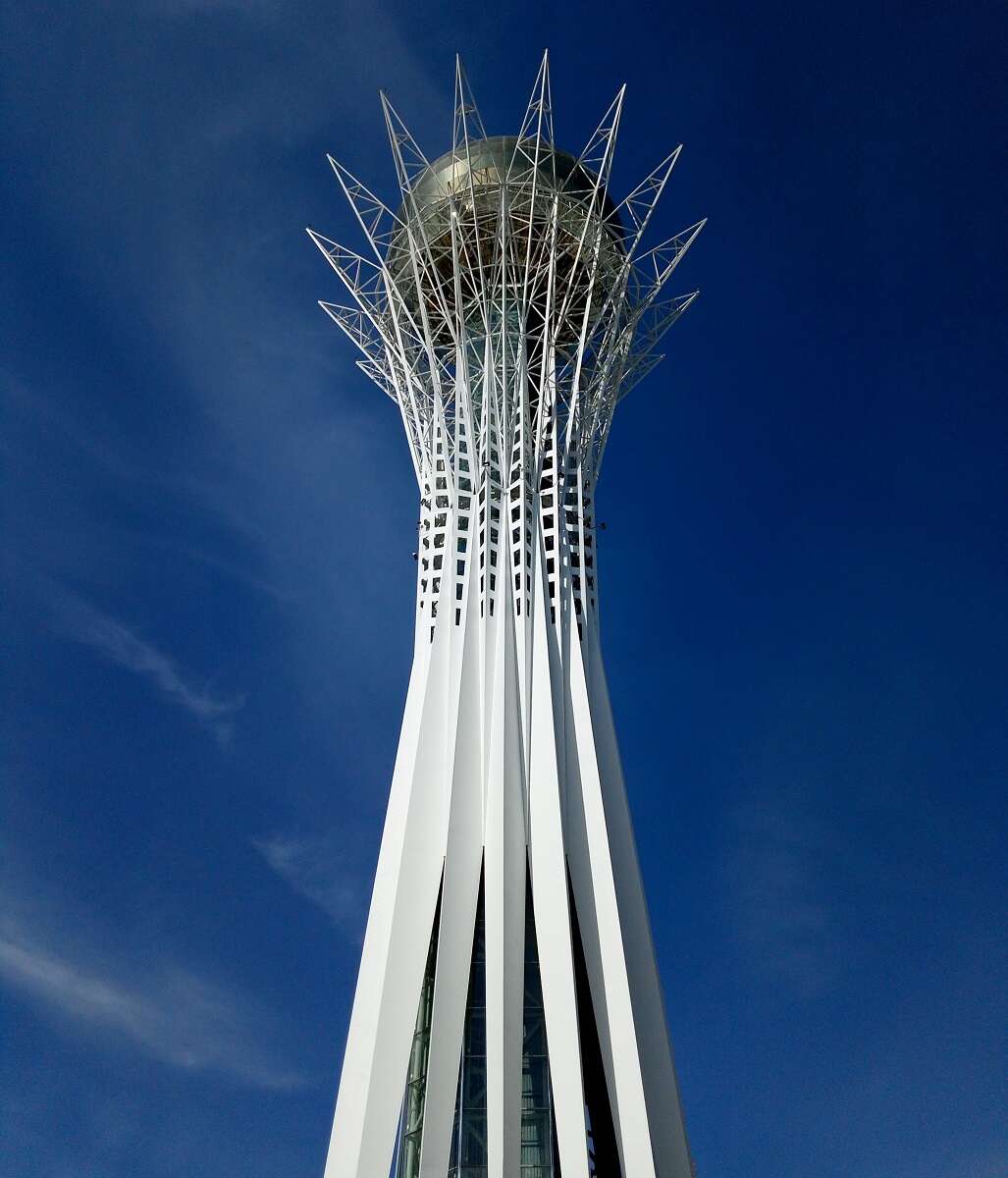 Walking along Water-Green Boulevard in the evening is even more interesting than in the daytime. Then the lights of numerous business centers around are lit up, a musical fountain begins to play and glow, then you get a full understanding of how modern Nur-Sultan is. 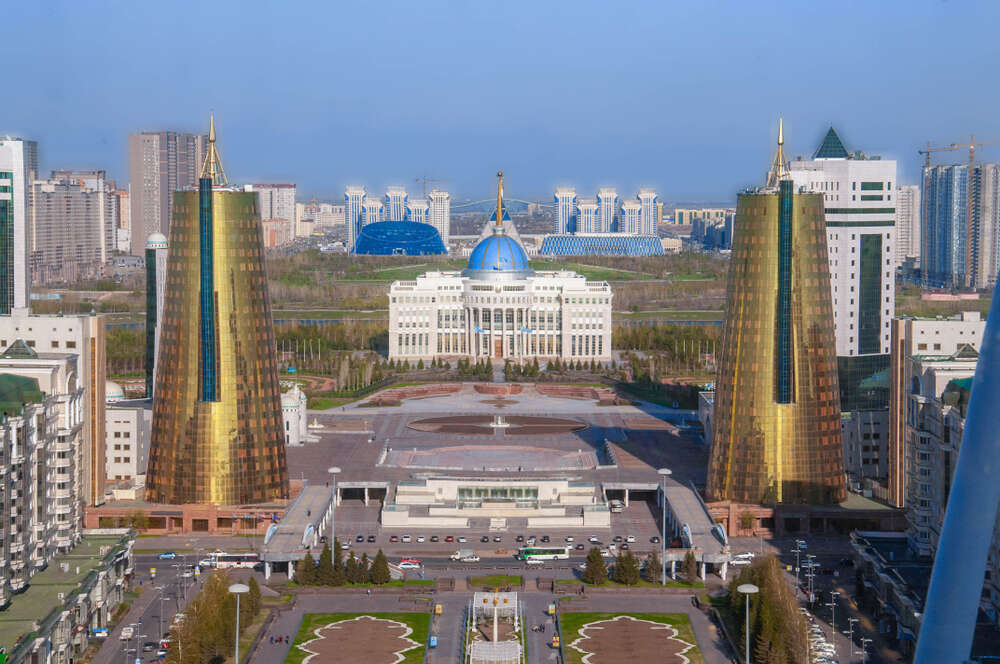 On the other side of the Ishim River, there is a green park with a futuristic pyramid in the center. This is the Palace of Peace and Reconciliation with exhibitions, conference rooms and galleries inside. Across the road from the park, there are white minarets of the Hazrat  Sultan Mosque, the largest mosque in Central Asia. The National Museum of Kazakhstan is a couple of hundred meters from it. 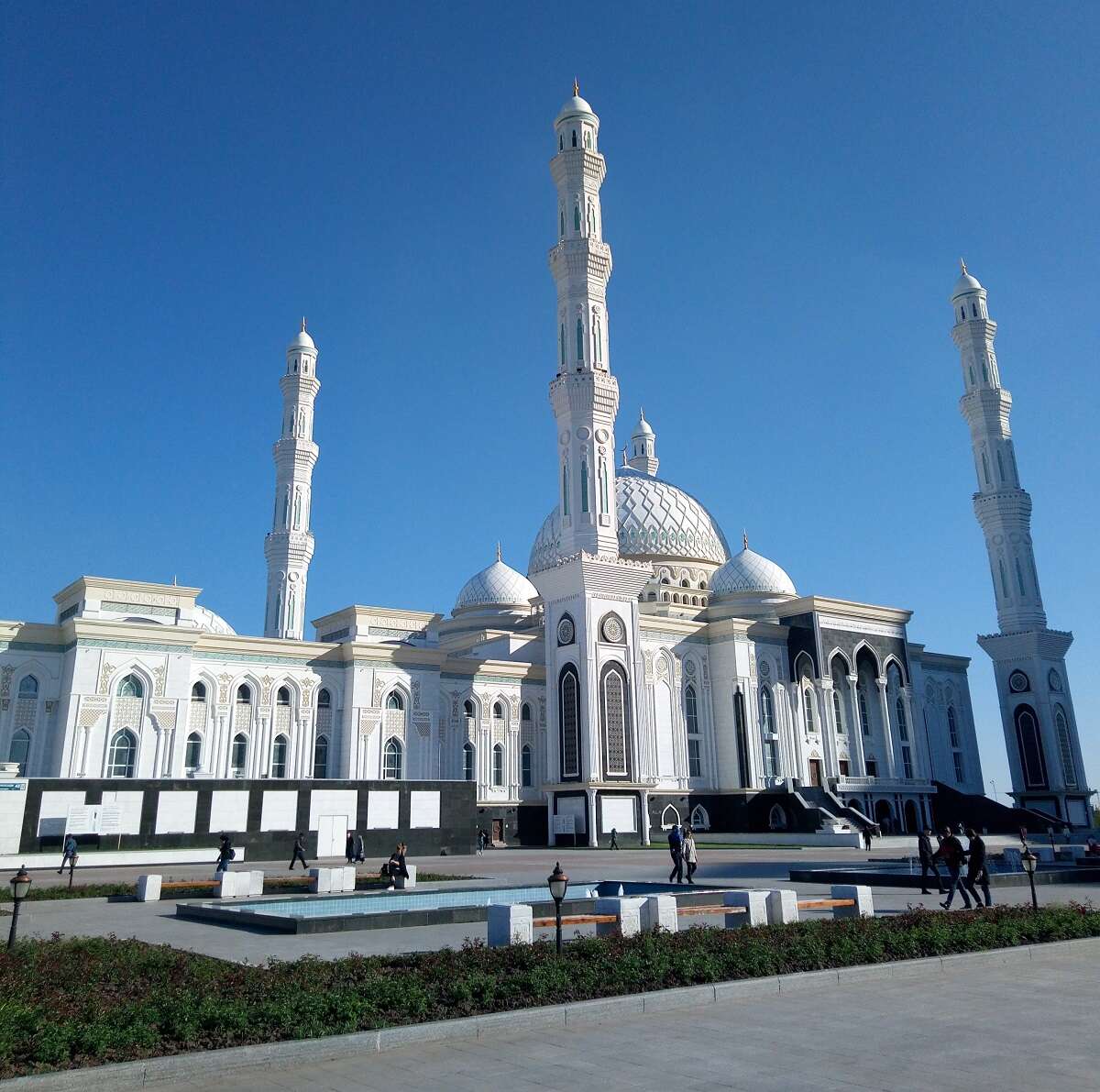 When you get tired of visiting attractions, you can just walk along the promenade of Ishim. And the children will definitely be delighted with the oceanarium in the entertainment center Duman. This is world's most remote aquarium from the sea.

The Silk Road Country: The Best Places and Activities in Kyrgyzstan

Burabay: relax on the lakes

Kazakhs prefer to live and work in Nur-Sultan, and relax in Burabay. The resort village, two hours drive from the capital, is not in vain called Kazakhstani Switzerland. In Burabay, you can go for a walk through the coniferous forests, breathing in the purest fragrant air, sit on Abylay Khan's stone throne or climb Mount Kokshetau. Everyone can do this, in order to climb to a height of 947 meters, you don’t need any special experience or equipment, and a one-way trip will take about two hours. 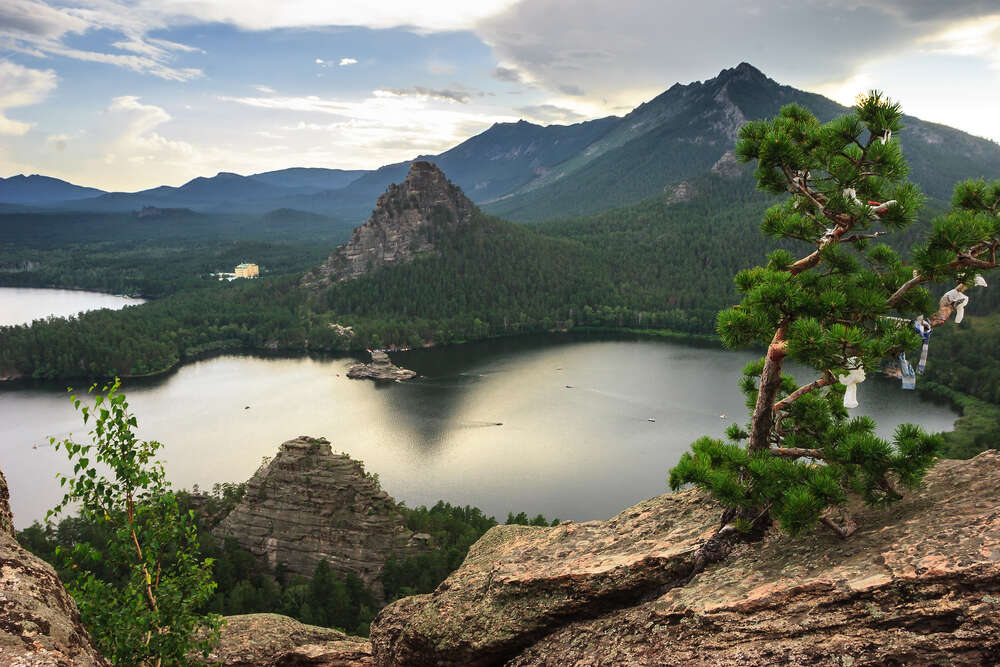 There are as many as five lakes around Burabay. In the warm season, you can swim in them, and go fishing in the cold one. In addition, in the village, you will be offered a unique type of relaxation - koumiss treatment. Would you like to properly try the steppe's specialty milk drink? After walking through the woods and swimming in the lake, it tastes especially good. 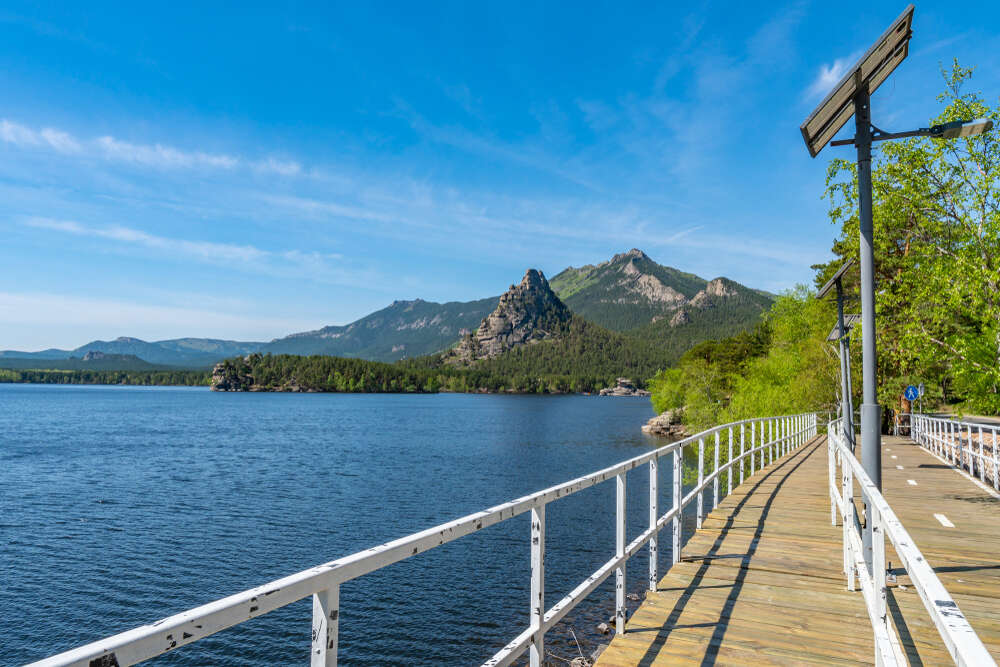 In winter, in Burabay, you can ride a dog sled through the forest, go skiing or ride a snowmobile with a breeze.

Almaty: immerse yourself in youth life

If Nur-Sultan is the business capital of Kazakhstan, then Almaty (or Alma-Ata) is youth. There are fewer office centers and white-collar workers hurrying up on business, but there are much more hipster cafes, youth parties and cozy streets. 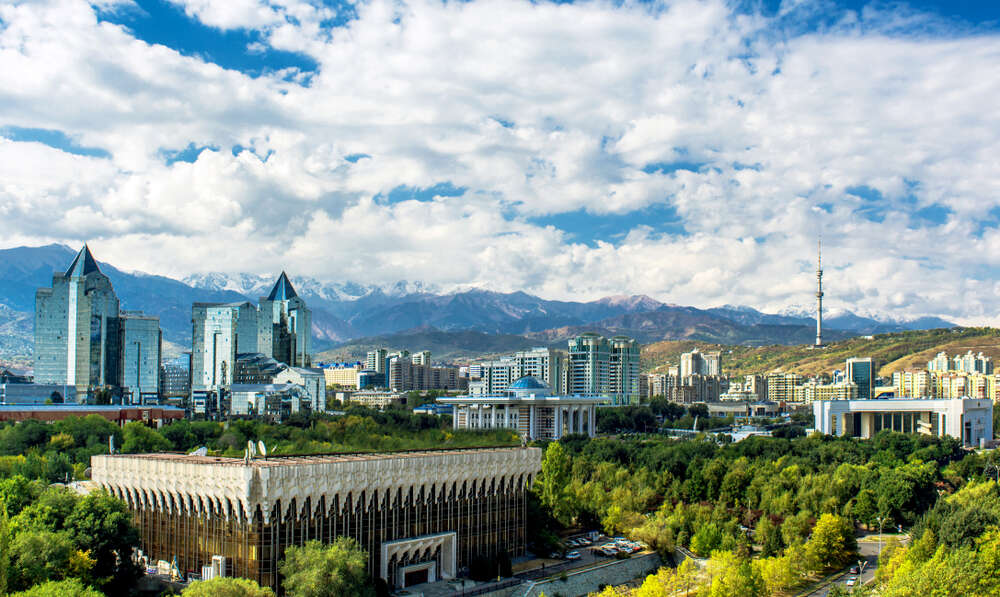 The cultural center of the southern capital is Zhibek Zholy Street, which is also called the local Arbat. It can be quite deserted during the day, but in the late afternoon, street musicians uncover their instruments, sellers of souvenirs and ice cream start brisk trading, the fountains lights turn on. The most beautiful mosque in the city is Becket-Ata, and the most beautiful cathedral is the Ascension Cathedral. The latter stands in the middle of the picturesque Park of 28 Panfilov Guardsmen, where you can feed squirrels with your hands or have a picnic on the lawn. Another interesting park is Kok-Tobe, to which the cable car leads. It offers a magnificent view of the city, the park has a contact zoo and attractions for children. 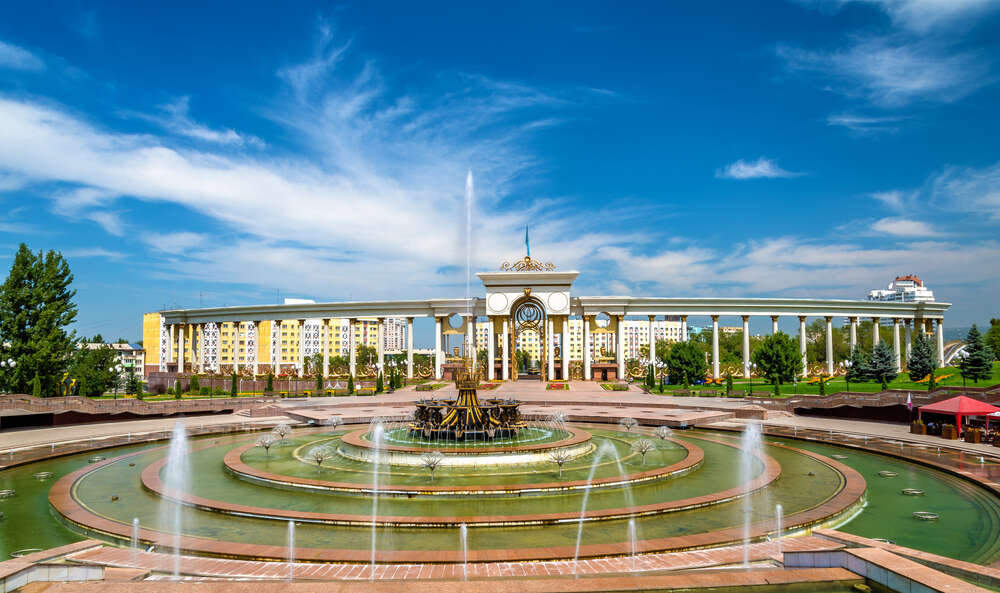 But the most picturesque park in Almaty and all of Kazakhstan is First President's Park. It impresses not only with its scale, but also with its stunning views, as you can see the snow-capped peaks of the Tien Shan mountains from any point of the park.

Strengthen your health in the mountainous Kazakhstan

You can’t visit Almaty without going to the mountains. Fortunately, this can be done even for a couple of hours, and then again return to the city bustle. Take the city bus that goes towards the high-mountain skating rink Medeu, and very soon, you will see mountains not only on the horizon, but also around you. 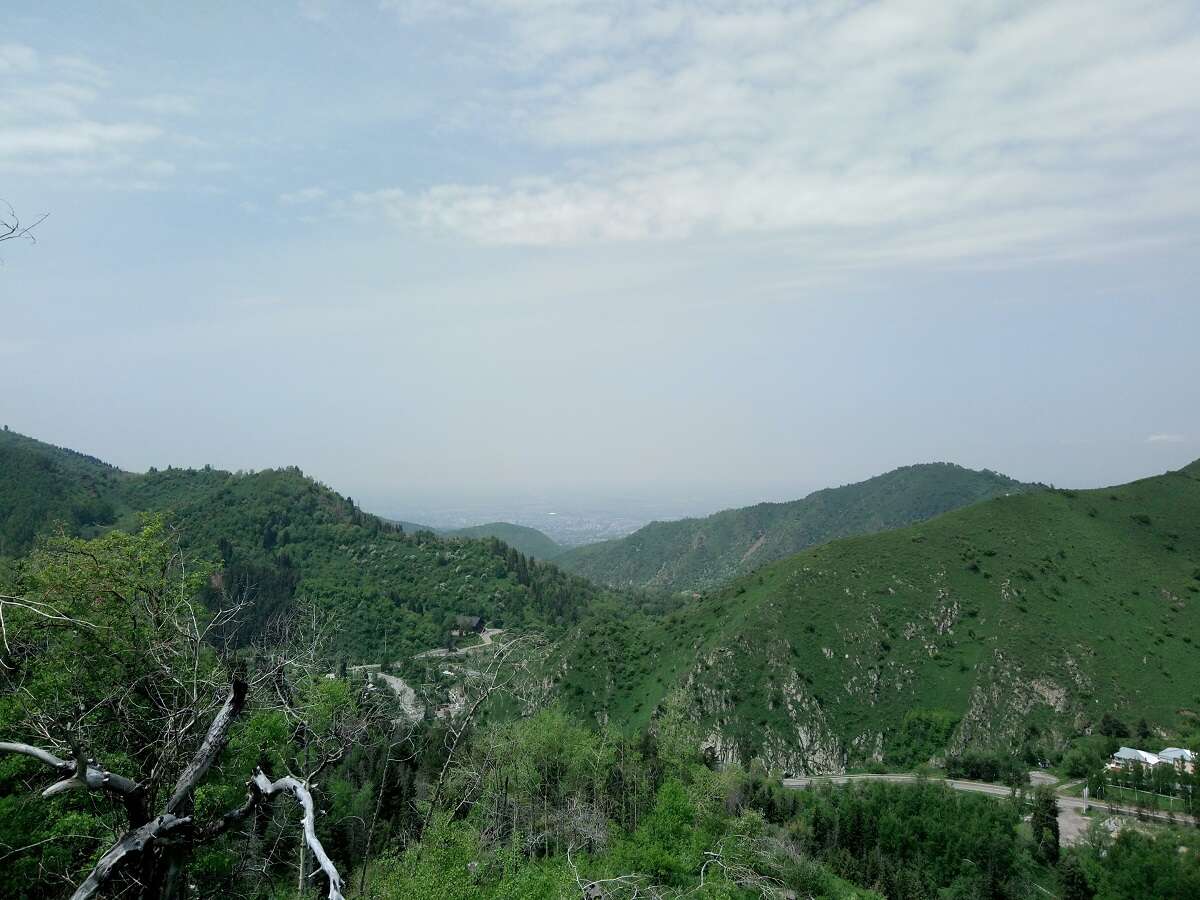 The easiest trekking route in the vicinity of Almaty is a health path, that will lead you to the Kok-Zhailau plateau. Stock up on sandwiches and water, there are no shops and other infrastructure on the road, and your walk will certainly make you terribly hungry. And what could be better than a snack of fresh fruit or a cup of hot tea from a thermos in an alpine meadow surrounded by gorges, waterfalls and peaks? 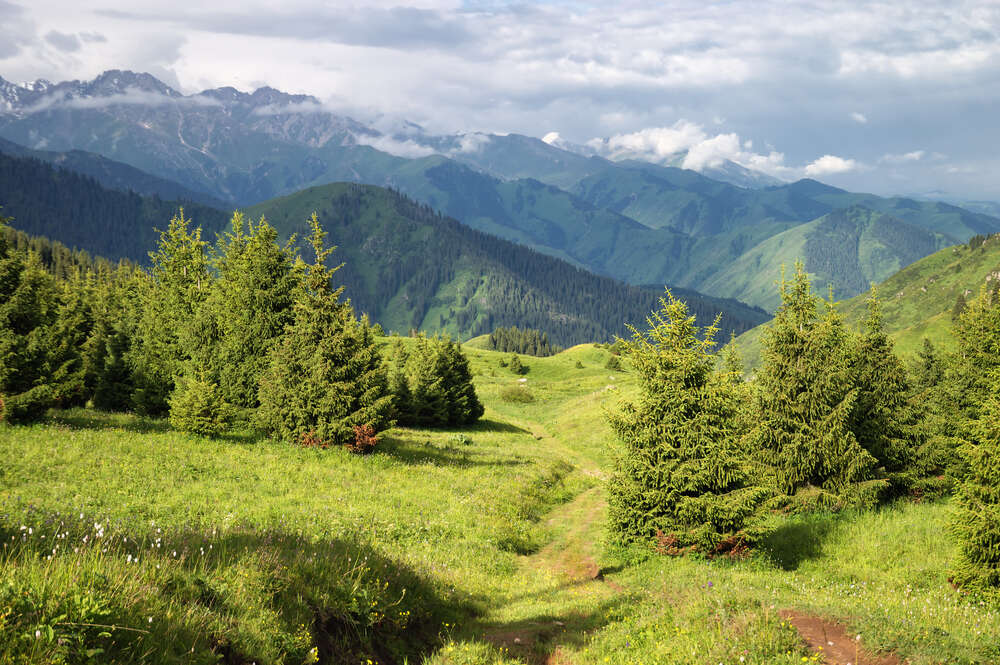 You can go skating in the Medeu complex, and skiing in the Shymbulak resort. Fans of long mountain hikes can be recommended to take a walk to the Big Almaty Lake or even make the Big Almaty World Tour. The route through the Tourist Pass, alpine meadows and mountain glaciers is 40 kilometers long, which gives you a couple of days in private with Kazakhstani nature. Is it too much? Then there is a shorter one-day route for 14 kilometers.

Charyn Canyon: take a photo among the rocks

Charyn is called the eastern twin of the American Grand Canyon, and the comparison is well deserved. The Charyn Canyon is not as popular as its colleague from the USA, and this is a huge plus. A grandiose chasm with yellow-red walls represents a ready-made scenery for a photo shoot in the post-apocalypse style, a great place for a leisurely walk or a romantic night in a tent. 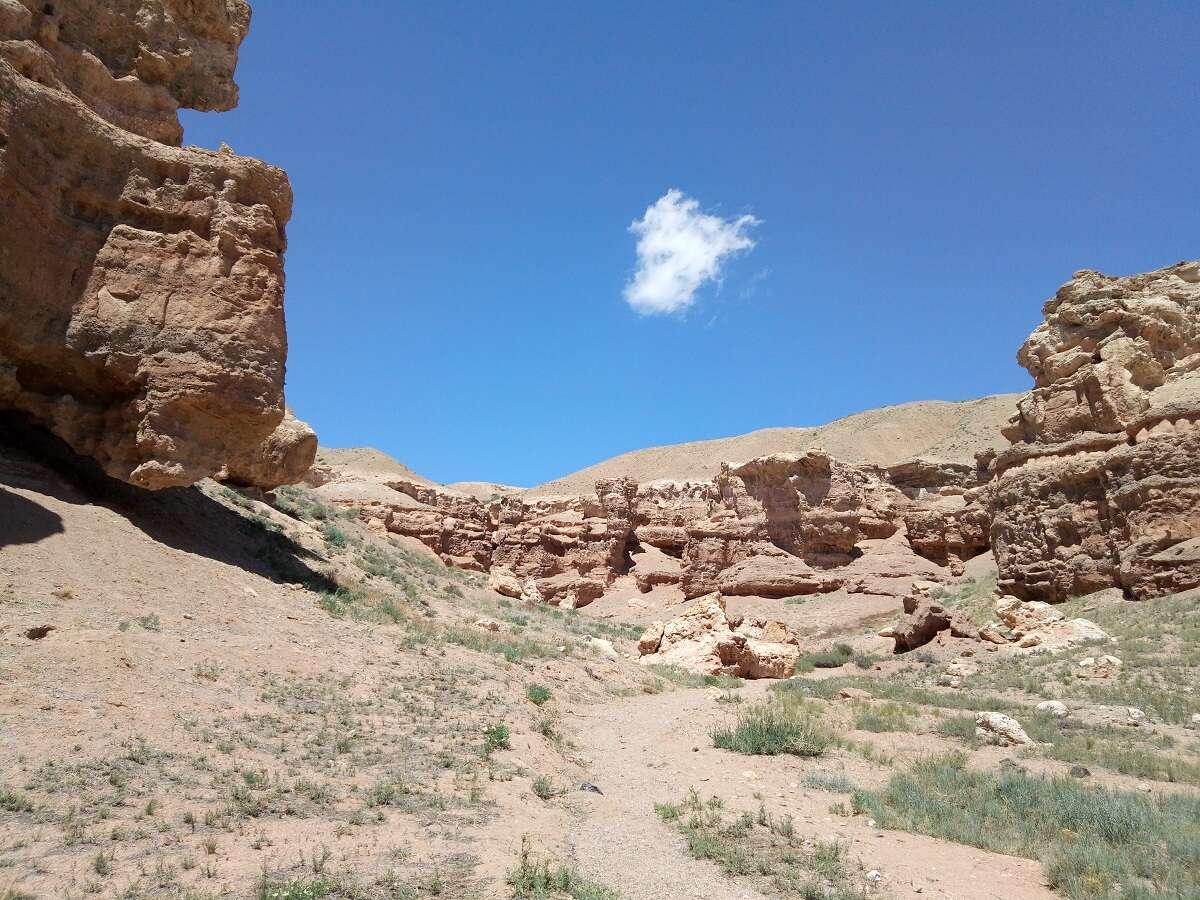 The canyon is located 200 kilometers east of Almaty, and you can get to it as part of a tourist group or on a rented car. The second option is much more convenient, you will not depend on other people and you can enjoy Charyn's ethereal views exactly as much as you wish.

Baikonur: have a look at the rockets

Baikonur is not just a spaceport, it is the largest spaceport in the world, the gateway to space. The Internet is full of videos and photos of daredevils who made their way to the territory of Baikonur through a hole in the fence or on foot at night without a flashlight through the desert. Algough, if you need not likes and views, but impressions received in a safe way, then you can get to Baikonur completely legally. 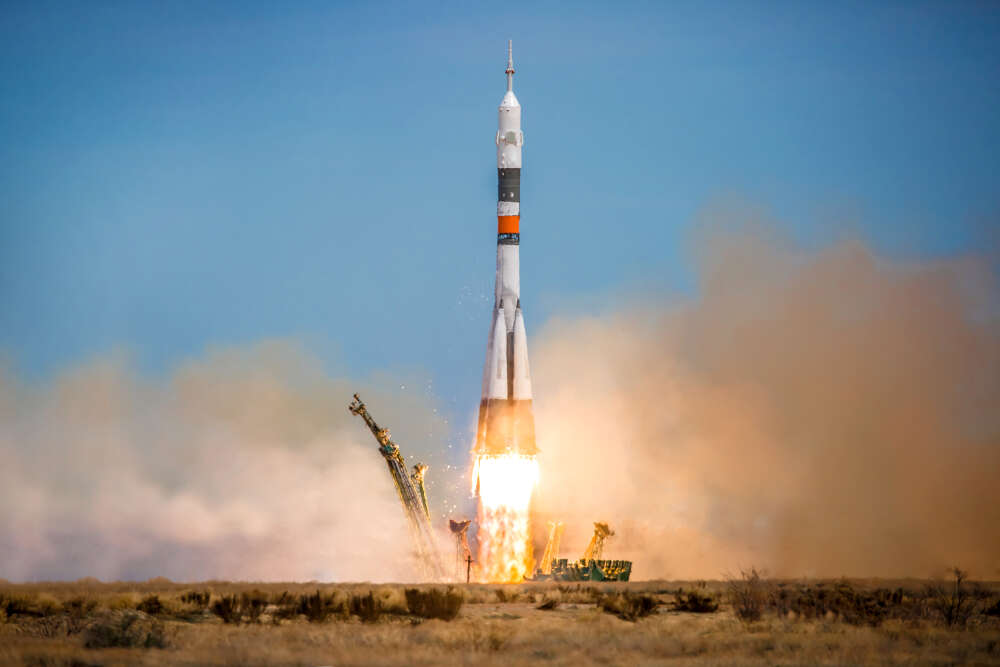 In order to look at the cosmodrome, you need to take a train to the Turatam station, where you can make a guest pass in the public services center. True, you will not be allowed to enter the missile launch observation zone with this pass. You will have to buy a tour at the agency for this purpose.

Where to do this? Almost anywhere in the steppe of Kazakhstan. The steppe blooms from late spring until mid-summer. At this time, you can see the bright red, orange-yellow, snow-white steppe. Poppies, feather grass of forget-me-nots - all this is a luxurious background for Instagram photos and just a bewitching picture. And there’s a great chance to see camels grazing among all this splendor. 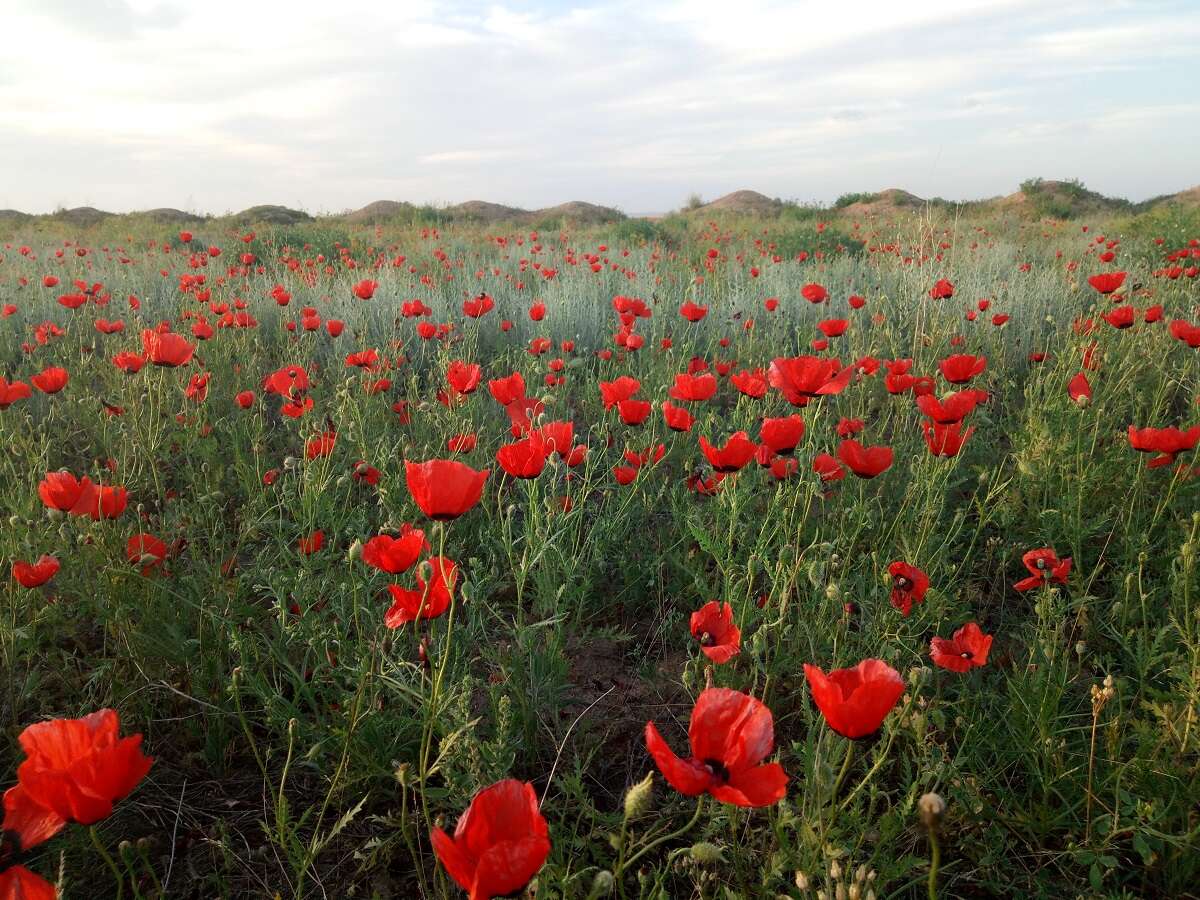 Of course, you can’t go to the steppe by bus or train (although you can enjoy beautiful views from the windows of the Nur-Sultan-Almaty train in spring). So rent a car and go for the steppe flowers. If you do not want to go too far from civilization, then sweep along the roads around the town of Balkhash. 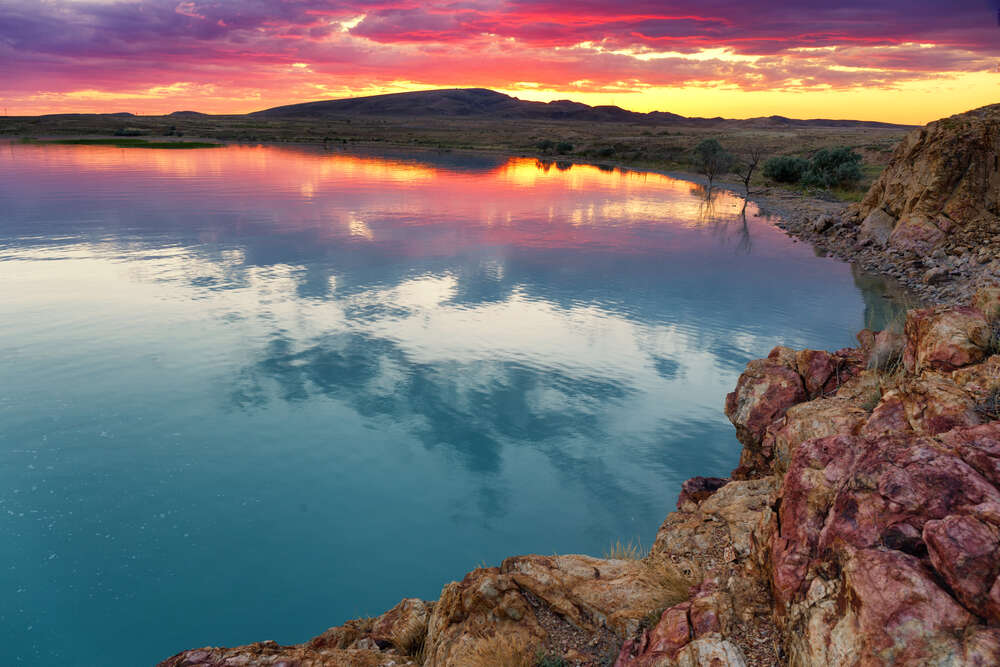 By the way, about Balkhash. This is the largest lake in Kazakhstan with many camp sites and holiday homes on its western shore. The thing is to leave to the steppe in the morning or at sunset, and swim in the cool water during the day. As for water, Lake Balkhash is a natural phenomenon, it is half fresh, half salty.

Treat yourself to a lagman

As well as manti, beshbarmak, kuurdak or pilaf. Kazakh national cuisine is rich in meat dishes, and one portion in the cafe can be eaten for half a day. The branded ingredient is horse meat, from which, for example, a popular kazy appetizer is prepared. And smoked fish lovers will definitely like such cocktail as carp or other large fish, smoked over an open fire and served with vegetables and herbs. 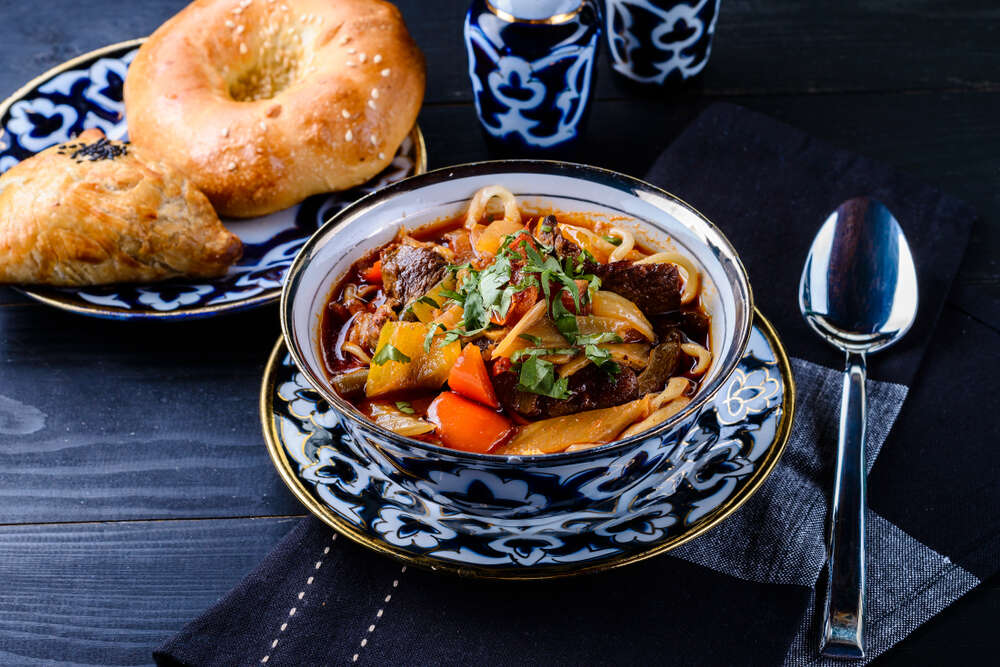 Baursaki pies, folk pastries of Kazakhstan, are sold literally on every corner. Lovers of original sweets should definitely try gent, roasted crushed wheat mixed with dried cottage cheese, honey, sugar and butter. Dairy products are very popular, for example, kurt from goat or mare's milk. And what would Kazakhstan be without koumiss? 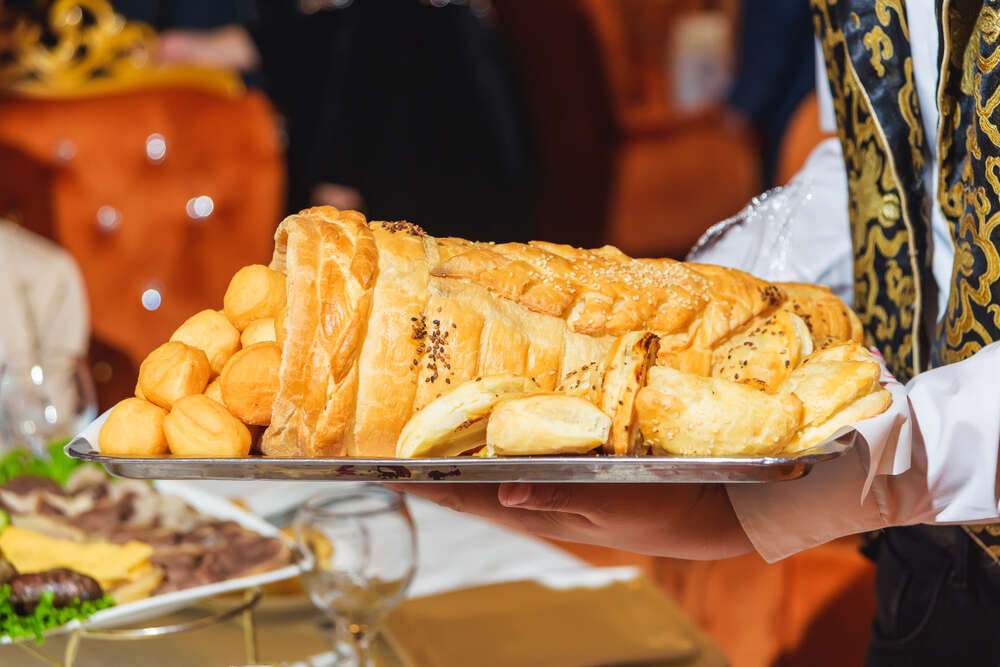 The sights of Kazakhstan are not yet as popular as the interesting places in Europe, there are much fewer people on the Tien Shan trails than in the vicinity of Nepalese Pokhara, and in order to climb Bayterek, you do not need to stand in a kilometer queue. But, who knows how long this will last, the New East is becoming one of the top destinations for tourism, so do not miss the chance to watch it before it becomes mainstream.