Pisa And The Leaning Tower

Everyone who has visited Italy simply must visit the cozy city of Pisa. Travelers come here to see the famous Leaning Tower - and they are surprised to find out that Pisa is very rich, beautiful and diverse.

And also in Pisa... Galileo Galilei, the world famous physicist, astronomer and philosopher, was born in 1564. There is still something large-scale, cosmic in this city - it is captured by those who come into contact with Pisa.

The famous Leaning Tower of Pisa impresses with its shape of a cake. To many people, it resembles a snow-white fragile soufflé. Located on the Square of Miracles with many architecturally valuable, spectacular buildings, it easily captures the hearts of the contemplators who arrive there. Since 1986, the Leaning Tower, together with the square, cathedral and baptistery, has been designated a World Heritage Site.

A fascinating story is behind the famous tilt of the tower. In this story, treachery, theft, engineering error, and even Italian dictatorship are intertwined. If you still didn’t know how the large structure leaned, Travellizy Team has collected 10 well-known facts for you.

The famous Piazza dei Miracoli owes its appearance to the military conquests of Italy. After the victory over the Muslims in Sicily, it was decided to use the proceeds to build a magnificent square. The first building to be erected was the Duomo Santa Maria Maggiore. This construction began in 1063. Then they started with the Baptistery, the Leaning Tower of Pisa and the monumental cemetery.

The location of the square's objects is very symbolic: the three complexes symbolize three main stages of a person's life: the Baptistery represents birth, the Cathedral - life, and the Camposanto Monumentale cemetery - death respectively. 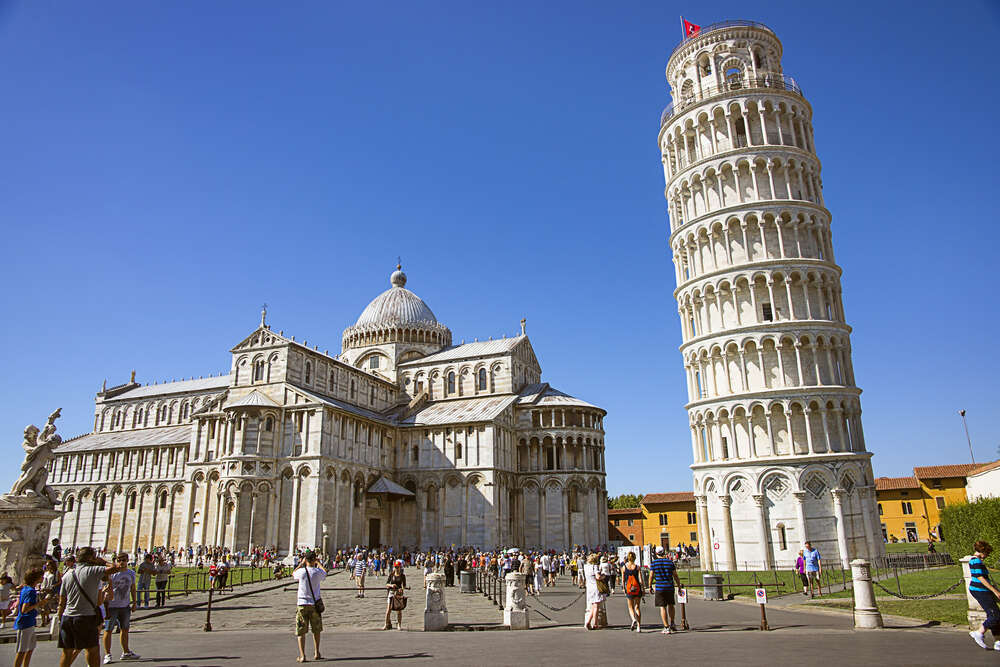 The tower is built of white marble, the ground floor is an arcature, each of the other floors is surrounded by a gallery. The outer part of each gallery is formed by columns with classical capitals resting on closed arches.

It is interesting that the Piazza dei Miracoli is not located in the historical center of Pisa, but at the fortress walls. Historians believe that religious rites were performed on the territory of the present square in the era of Etruria and Rome. Mosaics and several places of worship were found here. For this reason, it was decided to build a religious center. The Leaning Tower of Pisa was supposed to become the tallest bell tower of its time, and it would have, if circumstances had not made adjustments.

The construction of the Leaning Tower of Pisa began in 1174 and continued until 1350. Such a long period was caused by wars, as well as a lack of money, partly stolen during construction. However, the construction delays were even for the best for the tower, the soil had time to settle a little, which prevented its fall.

Back in the early stages of construction, uneven subsidence was noticed. The soft ground in Pisa is composed of sand, clay and sediment from the bottom of the Arno and Serchio rivers, which provoked leaning that later became famous.

2. The real architect of the Leaning Tower of Pisa is unknown.

Scientists suggest that Bonanno Pisano and Gerardo di Gerardo were appointed architects of the tower. Perhaps it was the architect Bonanno who saved on the foundation and replenished his wallet. One part of the foundation was laid on soft ground, and the other - on hard ground.

In 1272, Giovanni di Simone took over the project of the Leaning Tower of Pisa. The architect erected the upper floors, which are higher on one side than on the other. For this, the ceilings of the corridors were made higher on the side into which the tower fell. After that, the tower took on a slightly curved shape. The staircase on the north side of the tower has 296 steps, and the staircase on the south side - only 294. However, this only aggravated the situation: due to the curvature from the central axis, the building kept leaning.

Tommaso di Andrea Pisano finished the construction. He created a gothic top and installed a bell.

3. The tower leaned to the other direction.

From the very beginning, the Leaning Tower of Pisa leaned to the north and then began to lean to the south. And today, it leans to the south.

When they started building the third floor, the architects noticed a mistake and tried to stop leaning. However, as a result of the change in the center of gravity, the tower began to lean in the other direction. As construction continued, the tower returned to its original tilt towards the south.

Until the 20th century, there were fears that the building would collapse: by 1990, the tower's tilt angle had reached 5.5°. But during restoration work in the 20th and 21st centuries, the leaning was stopped. Today, the tower leans for 3.99°, which is 5 meters from the perpendicular.

4. The bells of the Leaning Tower of Pisa have been silent for over a hundred years.

The Leaning Tower of Pisa has not been ringing its bells for more than a century. Engineers fear their vibrations could shake the building even further. However, the bells were not removed - they can still be seen during the tour. 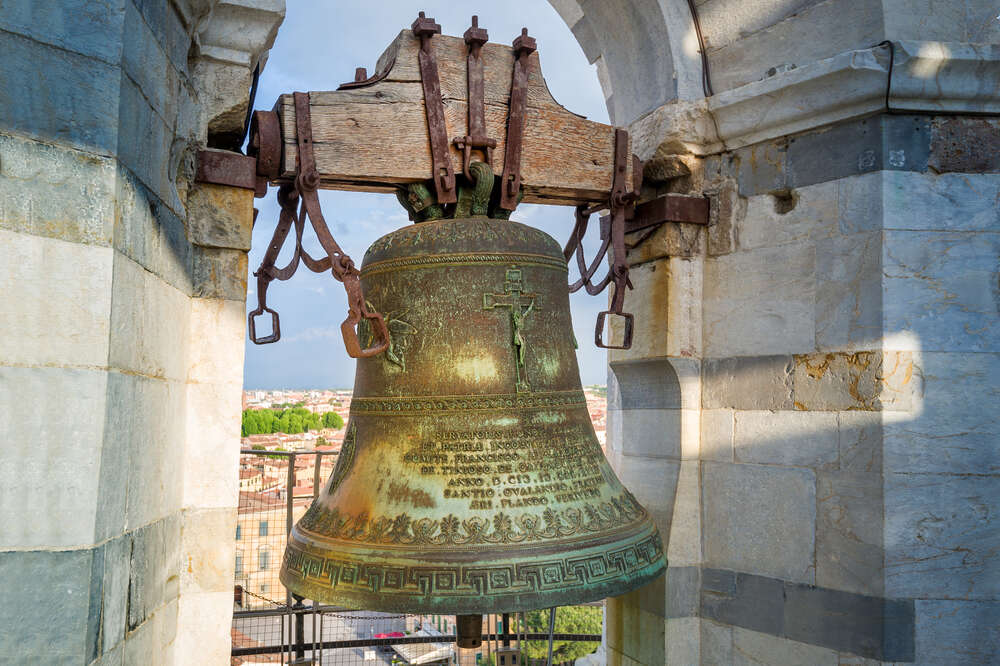 5. Mussolini believed that the tower damaged the reputation of Italy.

In 1934, Italian dictator Benito Mussolini declared that the Leaning Tower was damaging the country's reputation. He ordered to correct the appearance of the tower and gave money to strengthen the foundation. As a result, tons of cement were poured into hundreds of holes at the base of the tower. The heavy layer caused the tower to sag, which caused an even greater tilt.

During World War II, American soldiers were ordered to demolish all buildings that could serve as observation platforms for the enemy. However, after seeing the beauty of the Square of Miracles, they abandoned the idea of ​​blowing it up.

6. The bell tower of the Leaning Tower of Pisa is leaned at a different angle.

Although the tower itself is leaned, the bell tower, built in the second half of the 14th century at the top of the tower, stands at the angle at which the tower was leaned at that time. At the moment, both parts of the building appear skewed.

Engineers expect the tower to remain stable for the next 200 years.

7. Galileo is associated with the Leaning Tower.

In Galileo's biography, secretary Vincenzo Viviani mentioned that the great physicist had been dropping objects of different masses from the Leaning Tower of Pisa back in the 16th century. For example, he dropped a cannonball and a musket from the top of the tower to test the ratio of mass to velocity. This experience entered the scientific books of that time. 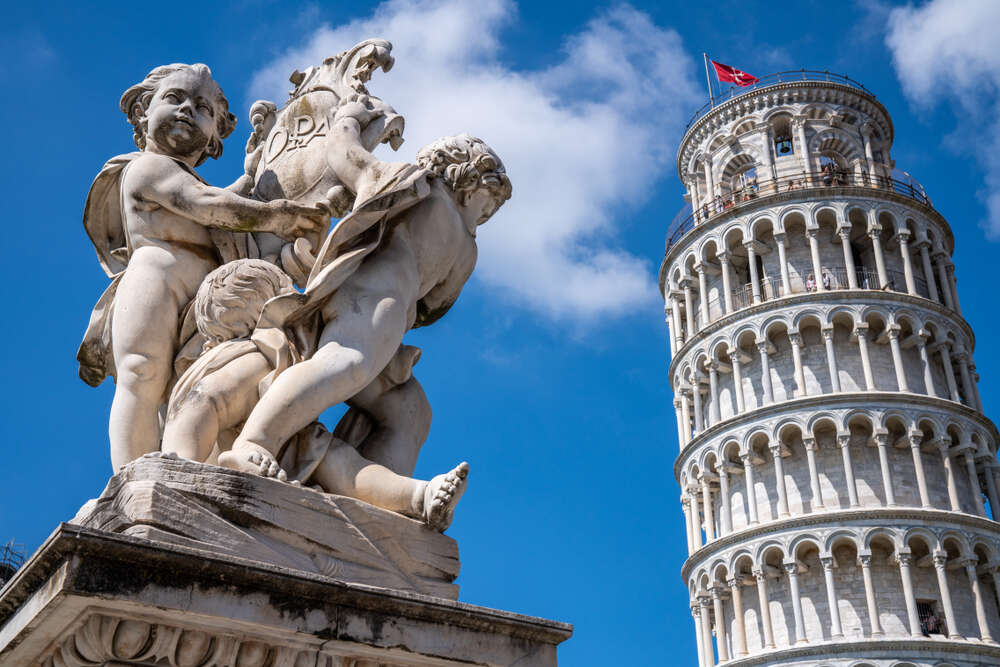 8. The tower is no longer falling.

Because of its tilt and its beauty, the Leaning Tower of Pisa has been under the watchful eye since 1173. From time to time, architects make attempts to make the building more stable - the foundation is strengthened, crumbling columns are replaced.

In the 1990s, unique works were carried out underground of the bell tower, which reduced the tower tilt. On the north side, lead bars were installed on concrete beams to stabilize the structure. Then the foundation studies and experiments were carried out. They showed that if some of the hard ground is taken away from the north side, then the tower can be straightened a little and the tilt can be stopped. The soil was taken away literally millimeter-by-millimeter through a system of casing pipes with a rotating auger drill inside. The tower gave a slight drawdown but stabilized, which made it possible to remove lead counterweights and temporary supports from it. 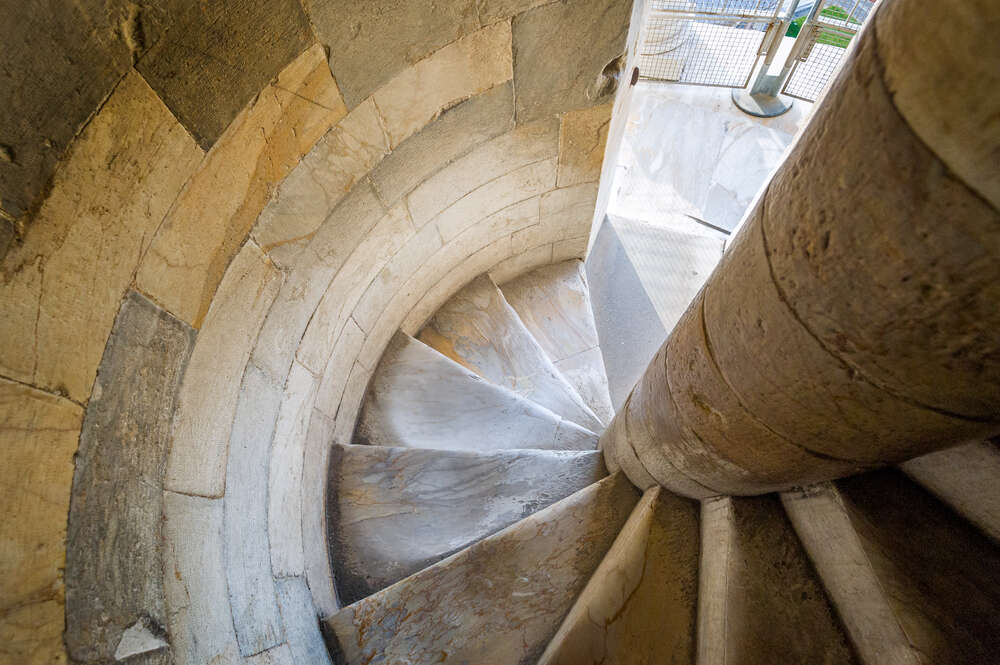 After the completion of the restoration work, the tower was opened to tourists in 2001.

In 2008, scientists once again announced that the further falling of the Leaning Tower of Pisa was stopped. In 2002-2010, restoration work made it possible to reduce its tilt angle from 5°30' to 3°54'. The deviation of the top from the vertical is about 4.8 meters.

9. There are other leaning towers in Pisa.

Pisa's soft terrain is the reason for the leaning of several other towers. For example, Campanile di San Nicolò and San Michele degli Scalzi are also uneven.

10. Thousands of people are trying to support the tower in the photo.

The famous Leaning Tower of Pisa is not only a UNESCO World Heritage Site, but also a subject for a wide variety of photo tricks for many resourceful tourists from around the world. Its noticeable 3.97-degree tilt opens up a million of possibilities for creative experimentation! 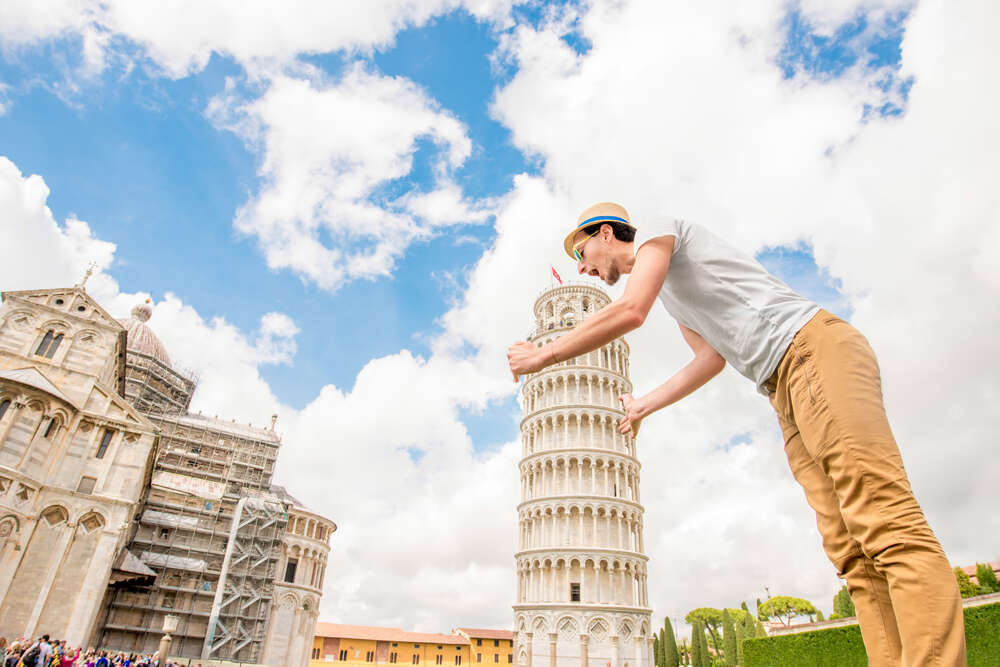 Of course, the most commonplace solution is just to show in the photo how you support a falling structure with your hands. Well, creative people come up with much more interesting ideas!