Postman Cheval's Palace, or Creation of a Naive Artist

Even if you've never been to France, you've still heard of Versailles, the Palais of Fontainebleau, the Palais Bourbon and the Luxembourg Palace. But it's very likely that even not all experienced travelers have heard about the Postman Cheval's Ideal Palace. It sounds strange, unusual and even a little illogical. But in the south-west of France, you can fund the Ideal Palace, the creation of a local rural postman.

Travellizy Team will tell you the history of the construction and the ambitious dreams of its creator.

Genesis of an idea

In the heart of the Drôme Hills, in the small town of Hauterives, people have been talking about an extraordinary monument for over a century. It is built in a private garden. And its author is Ferdinand Cheval, better known as Postman Cheval, by virtue of his profession.

An extraordinary builder built an incredible piece of architecture on his own, that keeps amazing not only ordinary people, but also among art connoisseurs. And today, the Postman's Palace inspires surrealist artists to create new masterpieces. 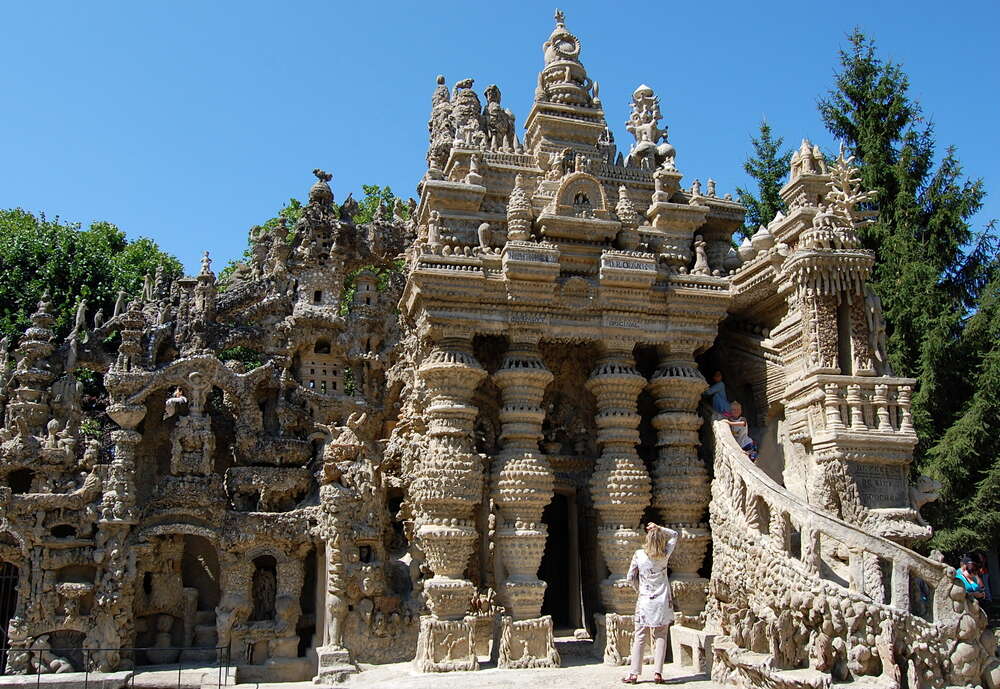 Postcards from different parts of the world with amazing palaces and beautiful buildings prompted Cheval to build the monument. He drew energy from the books and magazines that he was fond of, and the surrounding nature, which was his constant companion during his work.

In April 1879, at the age of 43, on a typical working day, Cheval found a very unusual stone, which served as the impetus for his dream. And this ordinary man began to realize his ideas alone. Later, he wrote on the finished building: "The work of one man."

The builder collected stones for the palace while delivering mail. And after work, he transported them to his garden on a wheelbarrow. The palace building is decorated with figures from mythology, animals, elements of a Hindu temple and Egyptian tombs, medieval castles and mosques, a Swiss chalet and a Barbary tower. The walls are decorated with poems and quotes.

Initially, the palace was called the Temple of Nature. But after the Alpine bard called the building ideal, Cheval gives a new name to his brainchild: the Ideal Palace. 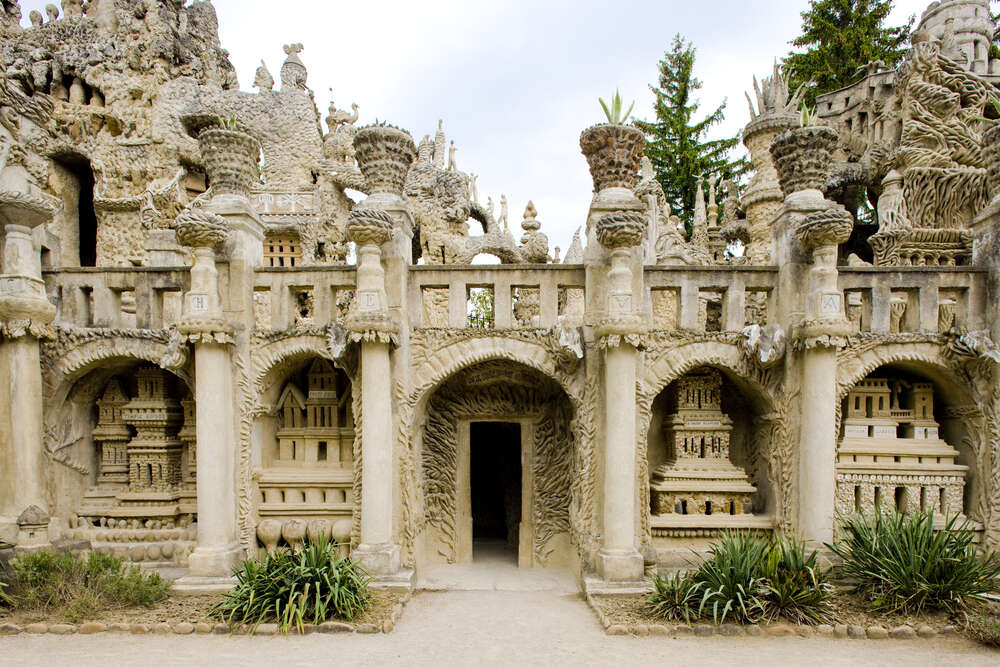 The work was completed in 1912, in 33 years! And only in 1969, the creation was included in the list of Historical Monuments as a worthy example of naive art (a movement that includes self-taught artists, without professional education). In 2014, a museum was opened at the monument, which stores documents about the life of an unusual author and the stages of the creation of the Palace.

Interesting facts. Every year, the Palace organizes a special event for Allround painters, sculptors, outsiders. Ferdinand Cheval's work is an inspiration and a challenge to contemporary creators' persistence and imagination.

The monumental building consists of east, north, west and south facades, as well as a gallery and a terrace. Construction began with work on a waterfall called Source of Life. Cheval made it from stones, oyster shells and snails in 2 years. The result was admired by the whole family.

The height of the east facade is 26 m. It consists of Saint Amadeus' Cave and the Source of Wisdom. It is an Egyptian tomb, which is designed for two. The naive architect really wanted to be buried here in the center of the palace, like a pharaoh. There are oriental temples and pagodas above the tomb. 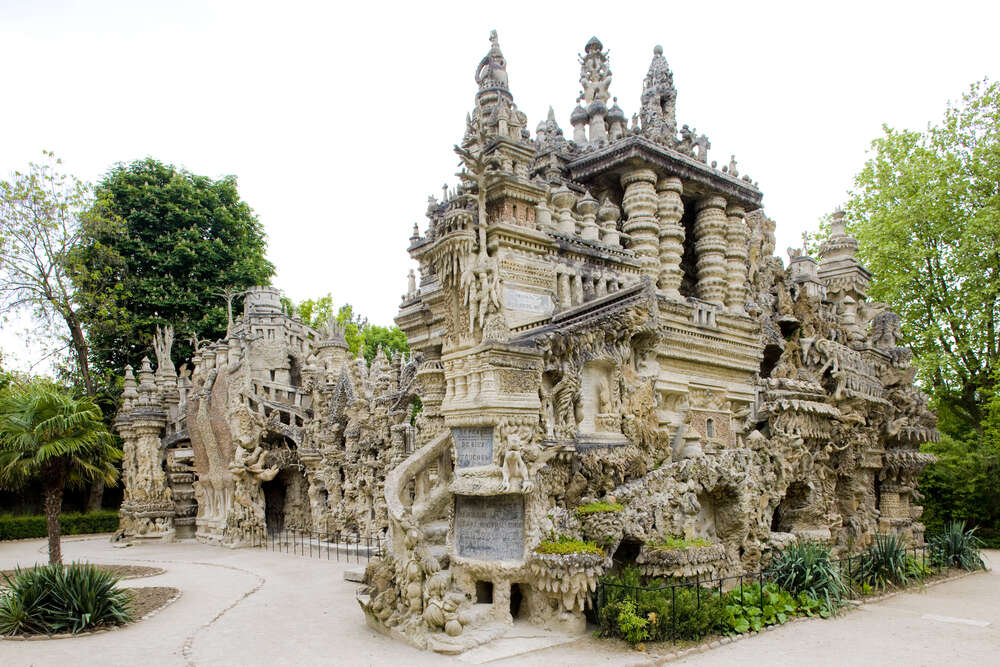 There is a monument on each wing of the palace. One of them has an Egyptian temple and 4 columns with sandstone balls. The other wings have 3 Giants that resemble statues from Easter Island. Each Giant stretches out his hand, as if pointing to the sky. They are called the keepers of the monument.

Behind the Giants, there is a niche where a wheelbarrow is stored now - Cheval's trusted assistant during construction. The dominant tower of the facade is decorated with prickly pears and aloes, palms and olive trees. It also serves as a water reservoir. At one time, it was connected to the Source of Life by the pipe. The east facade was completed in 1899.

The north side of the Egyptian temple reaches the moat. The moat conditionally divided plots of land. But the facade itself was dedicated to the Book of Genesis. The fragility of the structure led to significant damage. And the restoration work was carried out thanks to the recognition of the building as a historical monument.

The west facade is more structured. Ferdinand built here a Swiss chalet, a Hindu temple, a medieval castle, a square Algerian house, and a mosque that dominates the entire structure.

The south facade is the most laconic. It is crowned with an aloe and a dome with a tree trunk and animals. Also, stones were kept near the facade, which were collected by the creator for further work.

The implementation of the idea

An uninhabited palace was built in the center of a blooming garden. Without architectural rules and concepts about artistic directions. The creator populated the building with fallow deer, octopuses, elephants, caimans, bears, pelicans and birds as well as decorated it with fairies and giants.

Ferdinand Cheval's work is the embodiment of the world as he saw it and how he understood it. Its moral side is revealed in various inscriptions on the facades. The architect strove to make his palace universal, uniting many peoples, continents, religions and cultures. At the entrance to the mosque, on the west facade, it is written: "Fairies from the Orient come fraternize with the Occident". 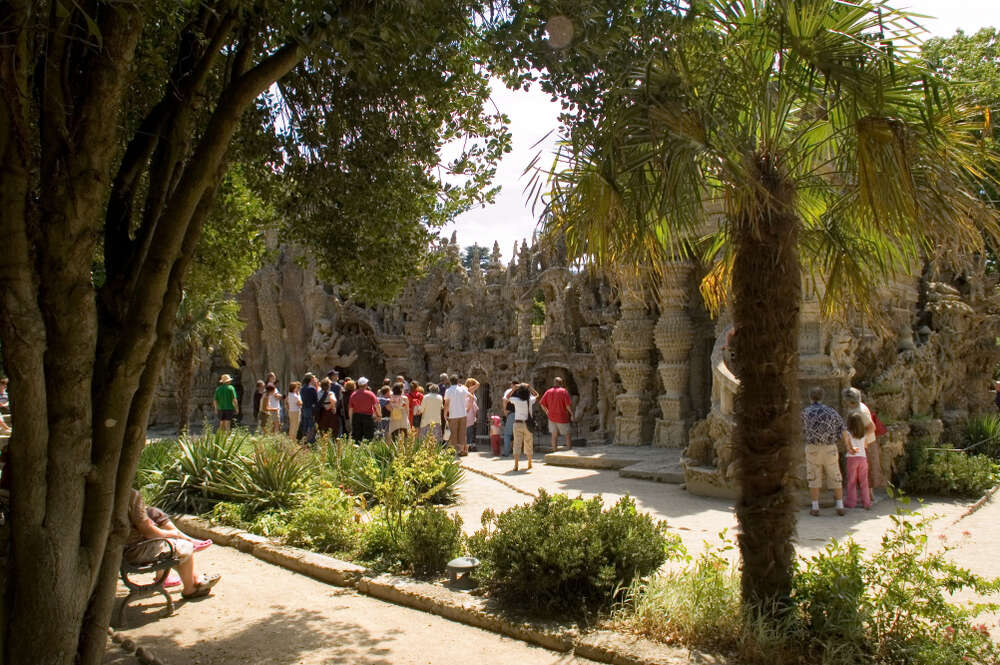 In his late years,, the famous Postman appealed to the authorities with a request to bury him in the Ideal Palace. But the authorities refused Cheval. And then Ferdinand, at the age of 78, begins the construction of a palace based on the family crypt. This brainchild was completed in 8 years. And the creator called it the Tomb of Silence and Endless Peace.

You can get to the attraction by public transport from the SNCF train station in Paris to Saint-Valle-sur-Rhône station. From here, the bus ride to Hauterives takes 30 minutes. You can see the bus schedule here. 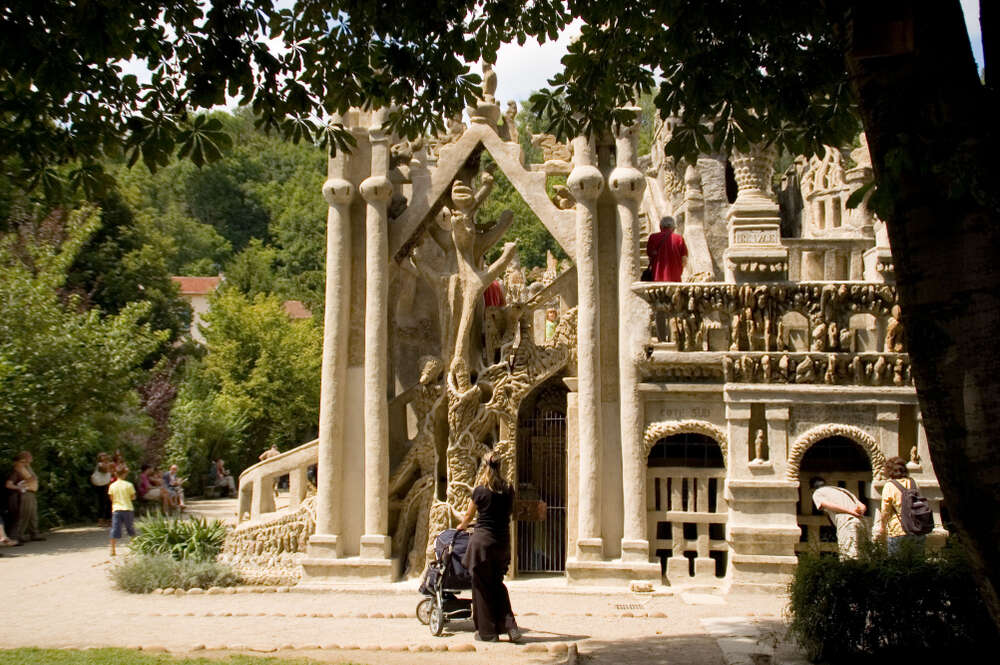 Did you know what postmen dream about? And how many of them made their dreams come true? Travellizy Team is confident that Ferdinand Cheval teaches you with his whole life: perseverance, faith that everything will work out and the ability to clearly formulate your goals. This inconspicuous landmark, against the backdrop of the chic palaces of France, can be much more useful to all of humanity and to each person individually. What do you think about it?