For an adventure to Slovakia: TOP of untwisted places, which will fascinate you

Slovakia is a small country, but it has everything: mountains, valleys, rivers, lakes, waterfalls, forests, caves, gorges, canyons, national parks, mineral and thermal springs, castles, fortresses, museums, resorts. True, there is no sea. And there are no million-plus cities. Even in the capital - Bratislava - the population does not reach half a million people.

But there is a lot of everything the best. The world's largest wooden Gothic altar, the very first city in Europe to receive its own emblem, the largest castle complex in Central Europe, the highest part of the Carpathians called High Tatras, the oldest marathon held in Europe. Upon return, you can complete the list.

Travellizy Team will share with you the experience of independent travel in Slovakia.

How to move around Slovakia

You can travel around Slovakia by train, bus, rented car, bike. From east to west, the train will take you 5-6 hours. From north to south, it will be even less. Bicycle travelers will feel comfortable: dedicated lanes, equipped parking lots, places in carriages for transporting bicycles (they also need tickets). By the way, in small towns, many Slovaks prefer a scooter to a bicycle for moving around the streets. 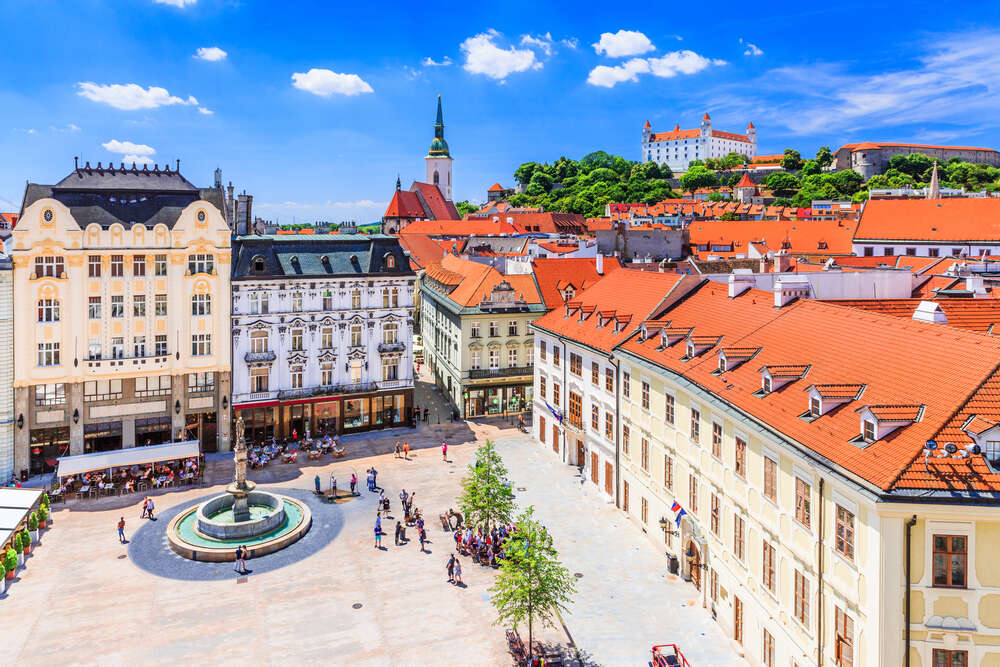 If you have a biometric passport, you do not need a visa to Slovakia. The time zone is minus an hour with Ukraine. The currency is Euro. The country is friendly to free WiFi. You won’t be left without a connection! 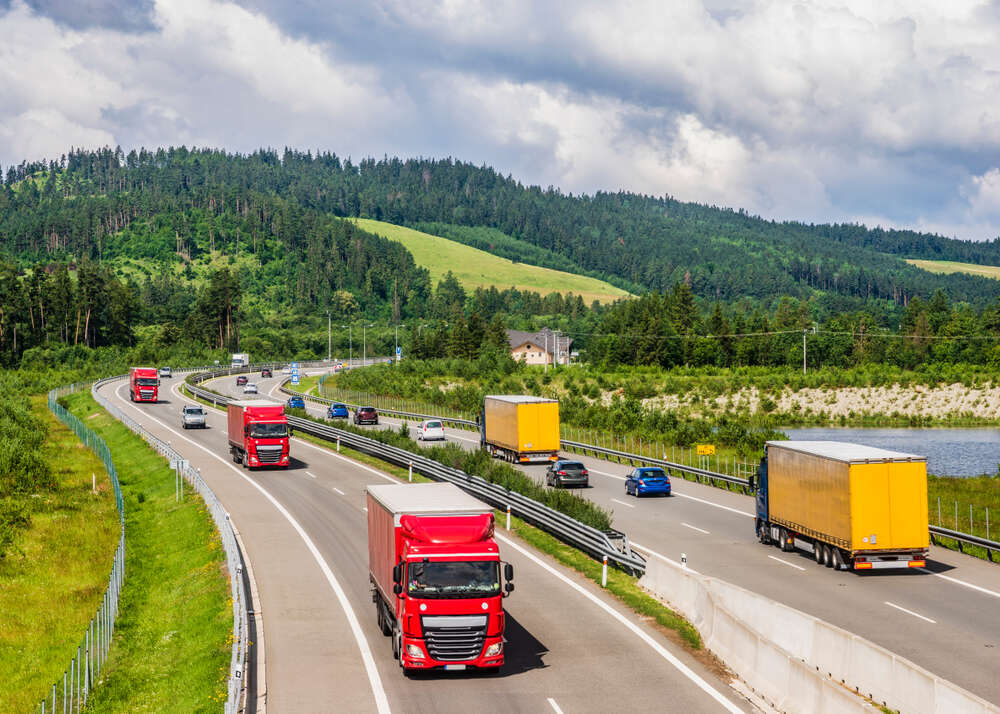 Slovakia borders on Ukraine, Poland, the Czech Republic, Austria and Hungary. And, if you have enough time for a long trip, you can go for a day to Vienna, Budapest, Brno or Prague from there.

Things to remember when traveling in Slovakia

The official language in Slovakia is Slovak. If you don’t speak it, don’t be upset. Many, especially young people, speak English. Those who are older remember a little Russian. So, knowing Ukrainian, Russian, a few words in Polish, Czech, and, having tuned your ears to the right wave, you will begin to understand Slovak speech. 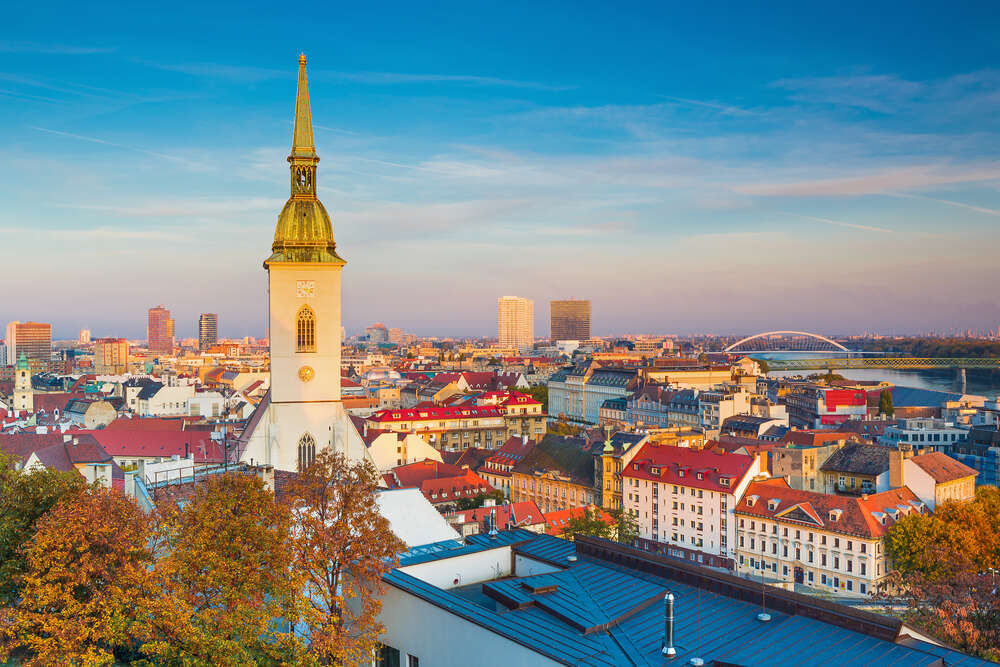 Look not for the train station, but for the "stanitsa".  At any box office, ask not for a ticket, but for a “listok”. In transport, pay attention to the word “zastavka,” not a stop. And, having heard "prestupovaniye", do not look for a crime. The driver announces a change. In a hotel, ask not for a room, but for a "izba", in the cafe - not a soup, but a "polevka." 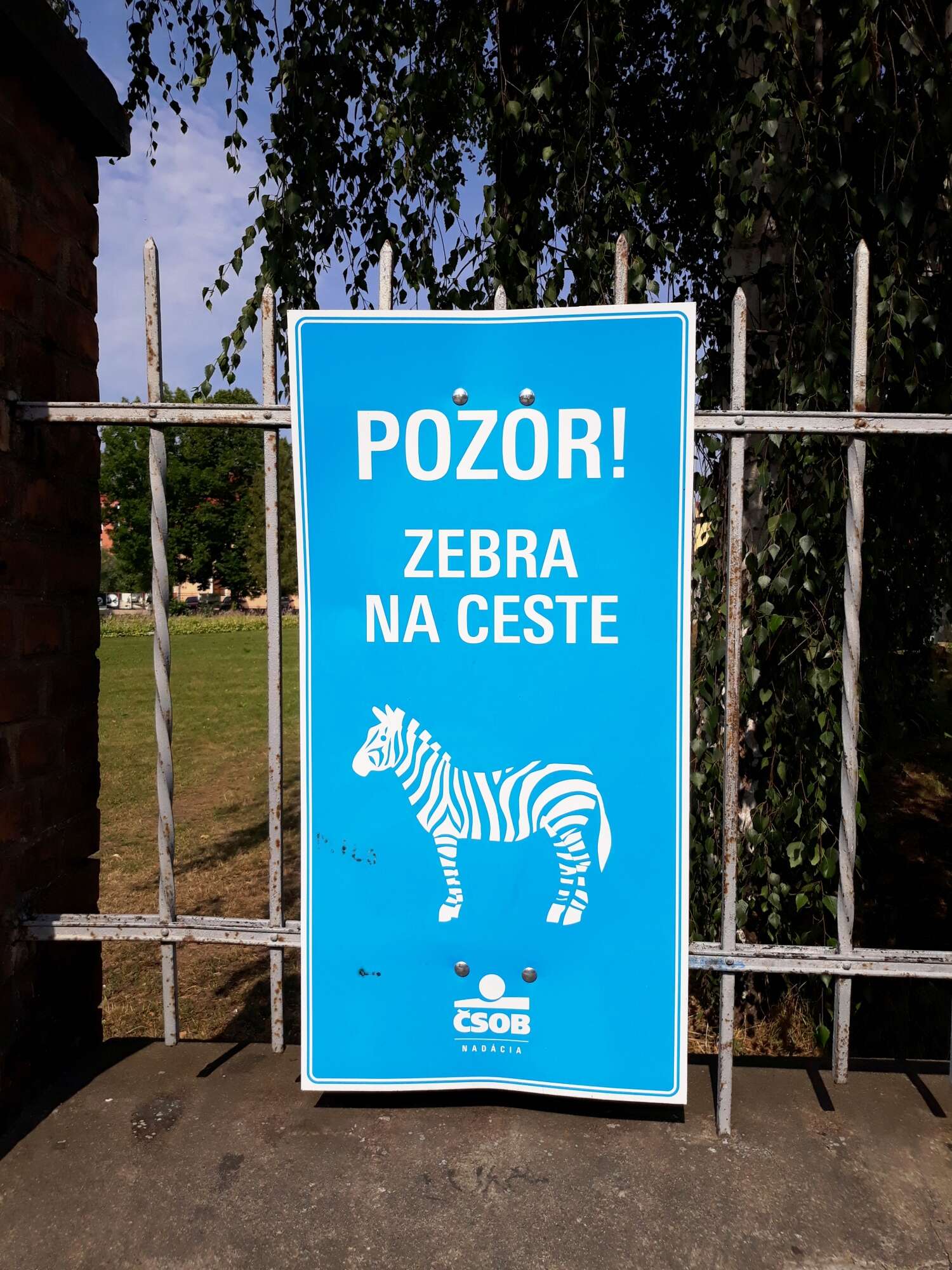 If you see a sign that says “Pozor!”, do not rush to remember where you messed up. You are just being warned about something. And if you hear "burka" from the local, do not laugh, but rather seek shelter, as a storm is approaching. Women in public toilets should not open the door that says «Páni».  Your door is “Dámy”. Say “dyakuyem” (thank you), “dovideniya” (hello), “vitayte” (goodbye), and they will understand you! The local population is friendly with travelers. 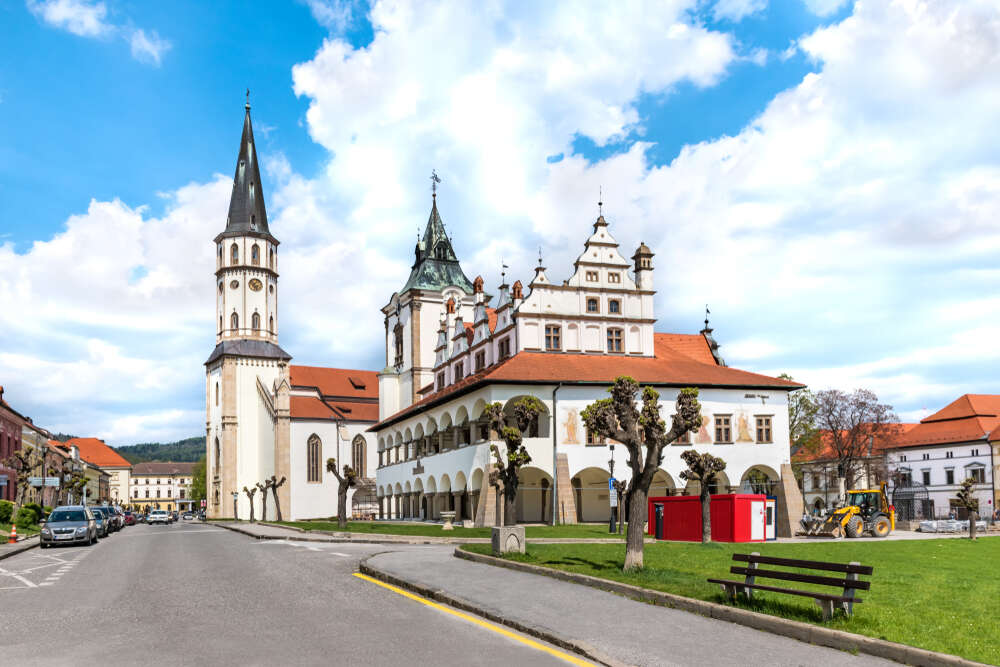 For lovers of independent travels, route planning is like a good snack or an aperitif before a plentiful feast. And no matter how long your feast will last. Slovakia is good because you can plan an interesting trip for a couple of weekends, a week or a month.

What to see on a weekend in Slovakia 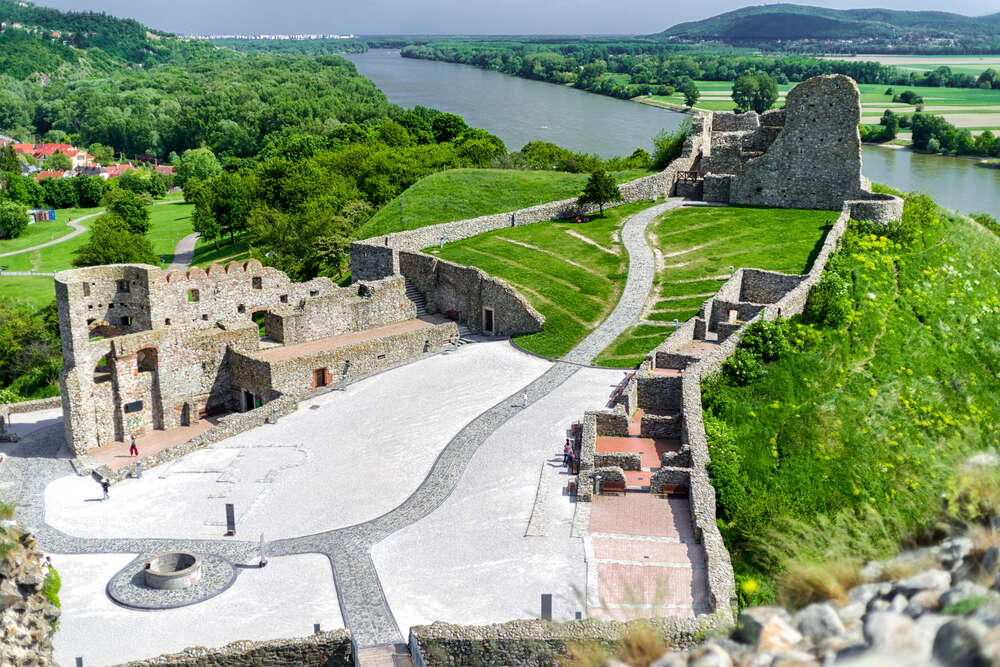 You can fly to Bratislava and spend two days exploring the sights of the capital and nearby cities, for example, Trnava, which is only half an hour away. Or set off on the Malokarpatská Wine Road, visiting vineyards and wine cellars. 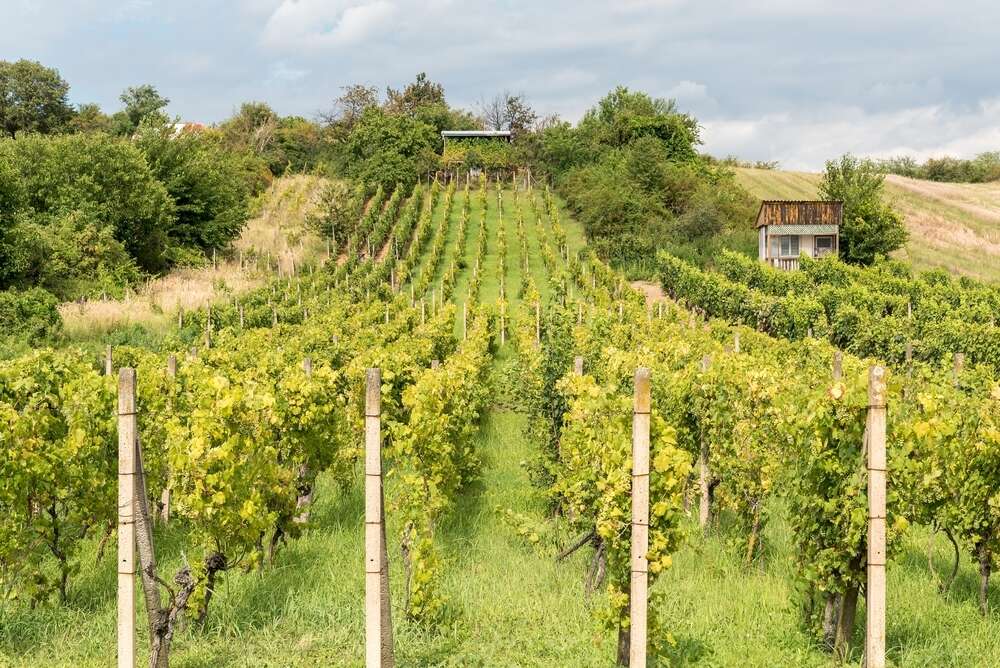 And you can devote one day to Bratislava and the other to Vienna. Trains and buses run from the Slovak capital to the Austrian and vice versa daily and hourly from 4-5 in the morning until 10-11 in the evening. Travel time is a little over an hour. Tickets for a train cost from 14 euros for a round-trip, and for a bus, it's from 10. Although with early booking and luck, there is a chance to buy a ticket for 1 euro. You can go to Vienna on the Danube by boat. 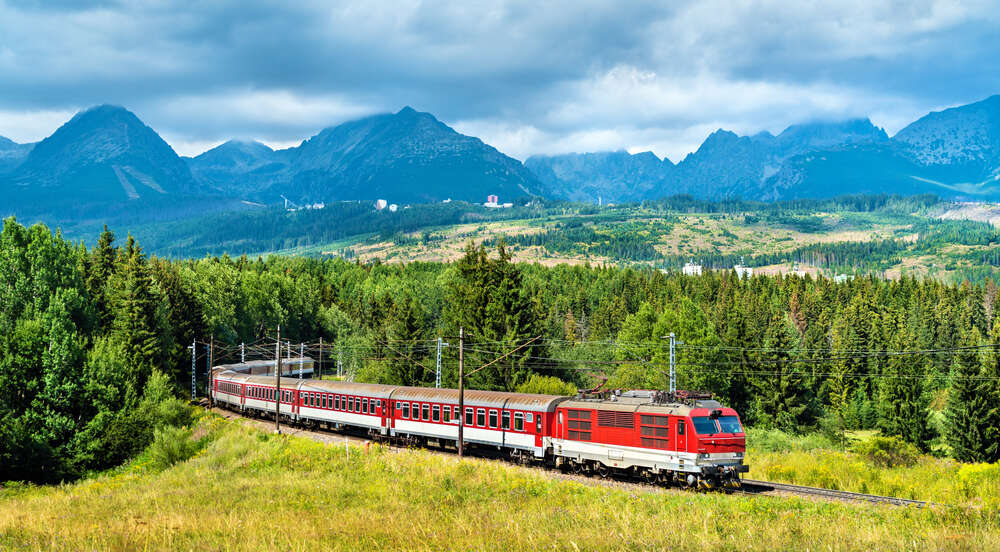 You can go to Kosice and make trips to the Herlany Geyser, to the Yasovska Cave, Tokaj wine cellars from there.

But in two days, adventurous appetites will only play out, therefore it is better to plan a trip for a week or two. 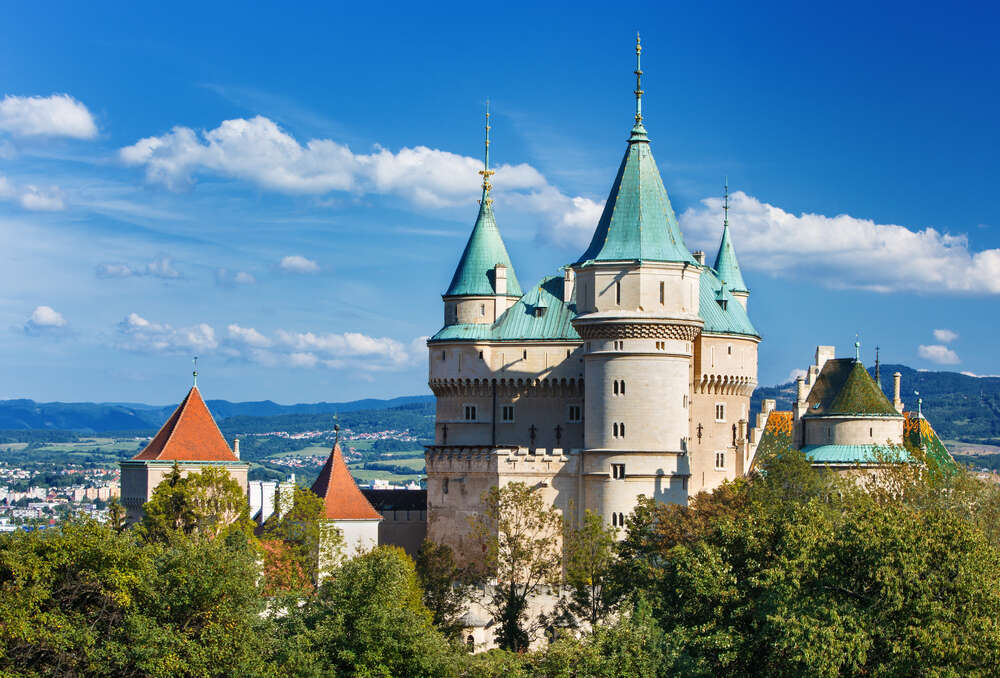 Choose a few base cities where you decide to spend the night, and from there take one-day mini-trips around the neighborhood. You can build a route with an overnight stay in a new city.

Kosice: what to see

Railway and bus stations are located on the same square. There are tram stops where you can leave for different parts of the city. Walking distance to the center is 10-15 minutes through the park. 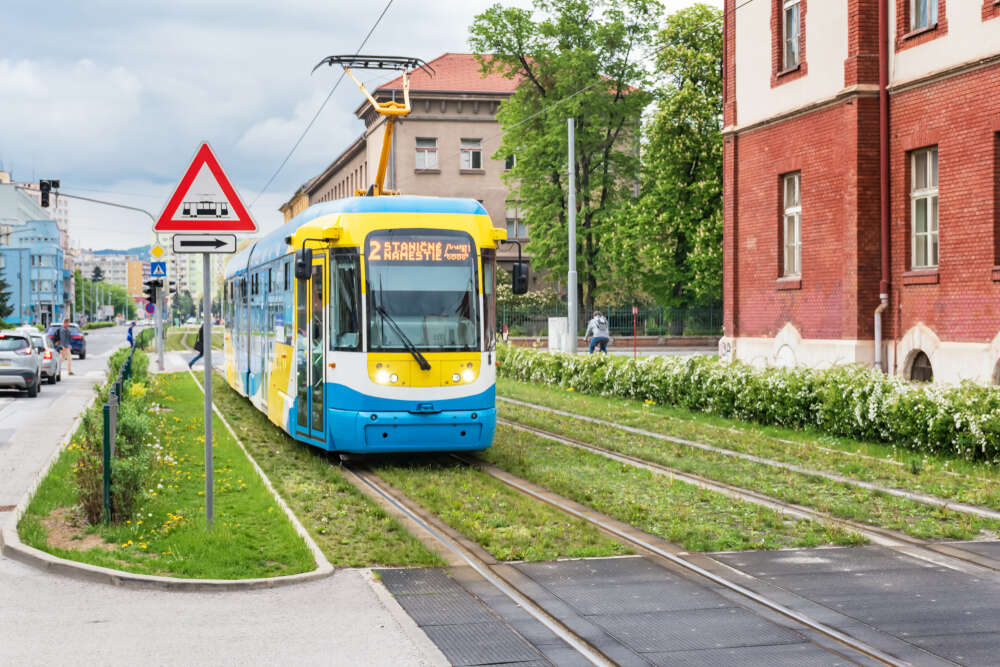 The first remarkable building, similar to a fairytale castle with green turrets, which you will see when approaching the Old Town, is the Jakabov Palac. At the end of the century before last, the architect Peter Jakab built it for himself. At one time, the residence of the President of Czechoslovakia was located here, and nowadays, various official city events and concerts are held here. 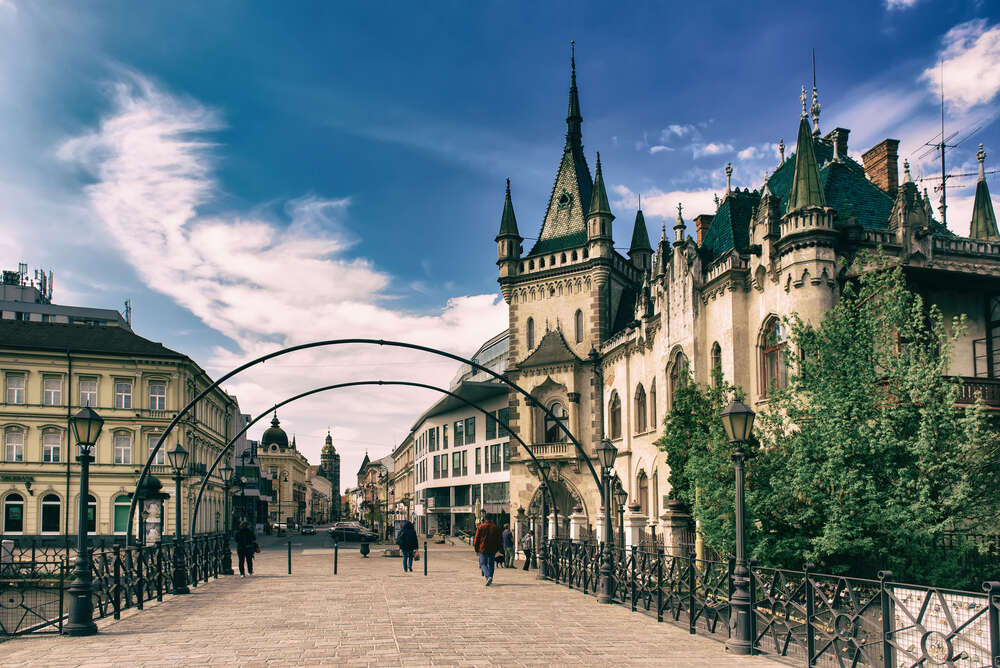 Hlavná Ulica is the main street of the city and the longest pedestrian street in Slovakia, it is one kilometer long. Expanding to the middle, it looks like a spindle from above. There are two tourist information centers on Hlavná (Travellizy advises visiting such points in any country). Come in, take maps, prospects, ask your questions. Depending on how long you stay in Kosice, staff will advise you on what are the most interesting places to visit in the city and the surrounding area and how to get there.

But at some point, just forget about the maps and plans, and go where your eyes look and your legs lead. And you will see a lot of interesting things! 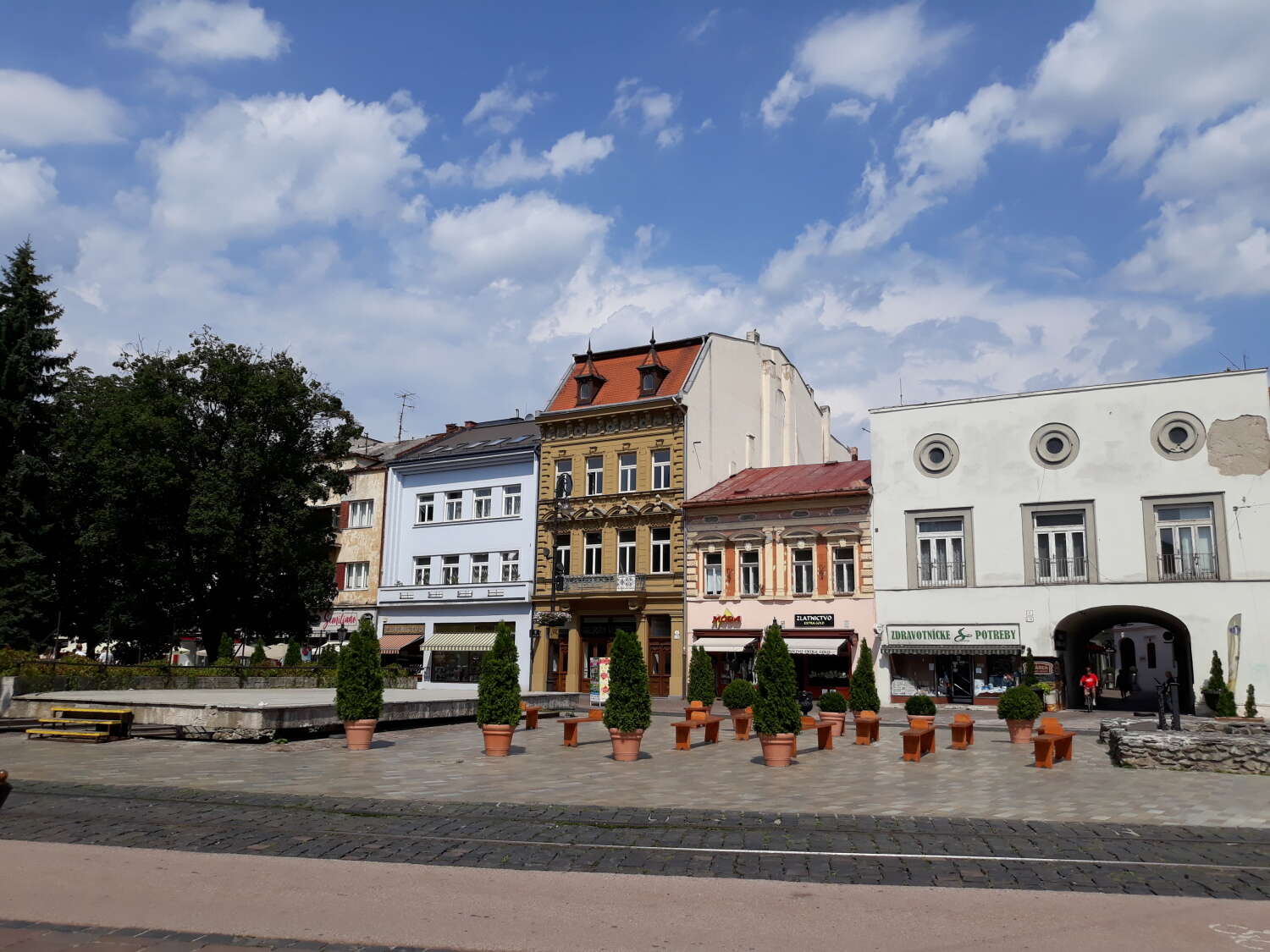 The center of Kosice, as well as of all Slovak cities, is cozy and a bit homely. It seems that you know everything here. Almost every home has beautiful architecture or an interesting story. Almost every yard is a checkpoint. Inside of many buildings, there are small stylish cafes. They are generally here at every turn.

In the center of the city, there is the largest Gothic cathedral in Slovakia called St. Elizabeth Cathedral. There is a legend that during the construction of the temple, the builders placed a hollow stone inside, and if it is removed, the whole church would collapse. But so far no one has found this stone, you can order an hour-long tour of the cathedral, and at the end, go up to the 60-meter tower to see the beautiful panorama of Kosice from above. 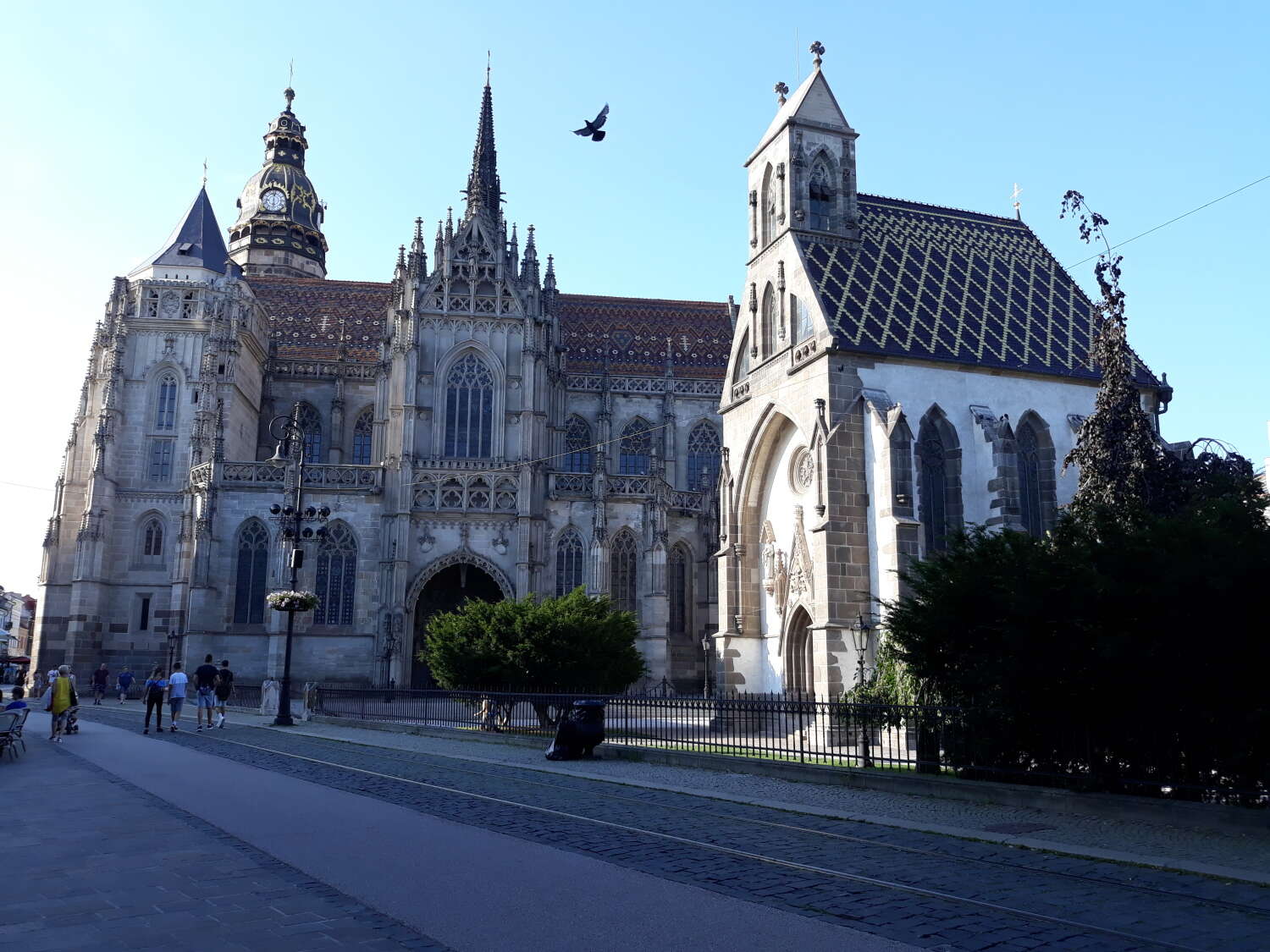 Having descended from the heaven, continue acquaintance with the city underground. Not far from the cathedral, there is the Lower Gate (Dolná Brána). Dive there, as if into an underpass, and find yourself on medieval streets. For 90 cents from May to October, you can explore the city fortifications of the XIII century.

The underground archaeological complex houses the Tokaj Wine Road Museum. In September, the Kosice Wine Festival is held in this dungeon. You make a note in our heads, that you should visit Tokaj, the Slovak wine region. 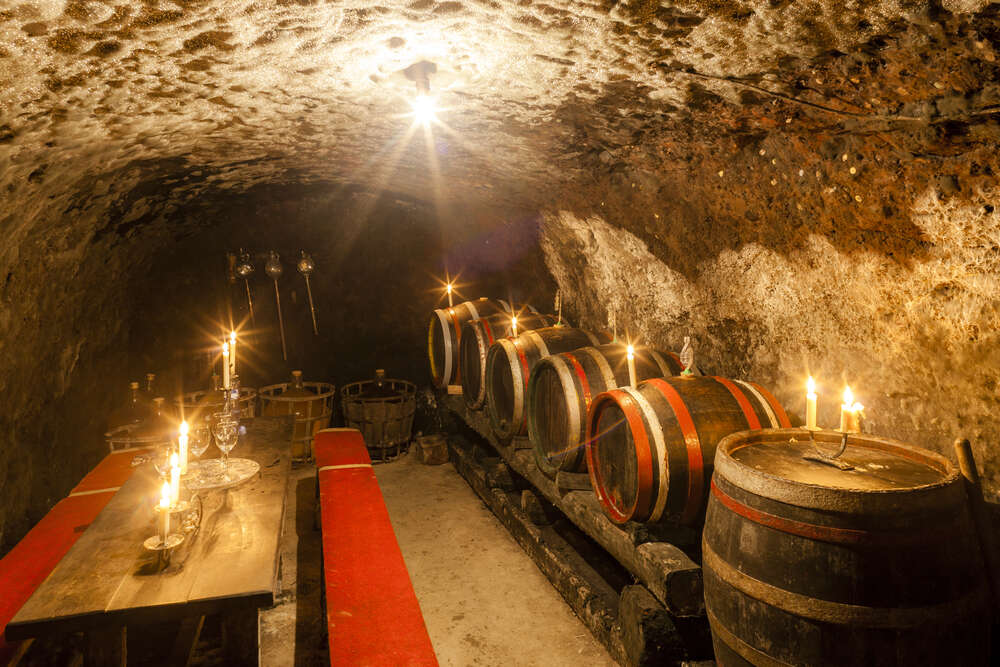 If, leaving the church, you did not go along Hlavná, but along Elizabeth Street, then first you will meet the bronze Julius Jacobi, a famous Slovak artist walking along the pavement, and after a couple of dozens of meters, you will come across a huge heeled shoe painted in the style of Andy Warhol. There are several such shoes in Kosice - this is a gift to the city of different artists. 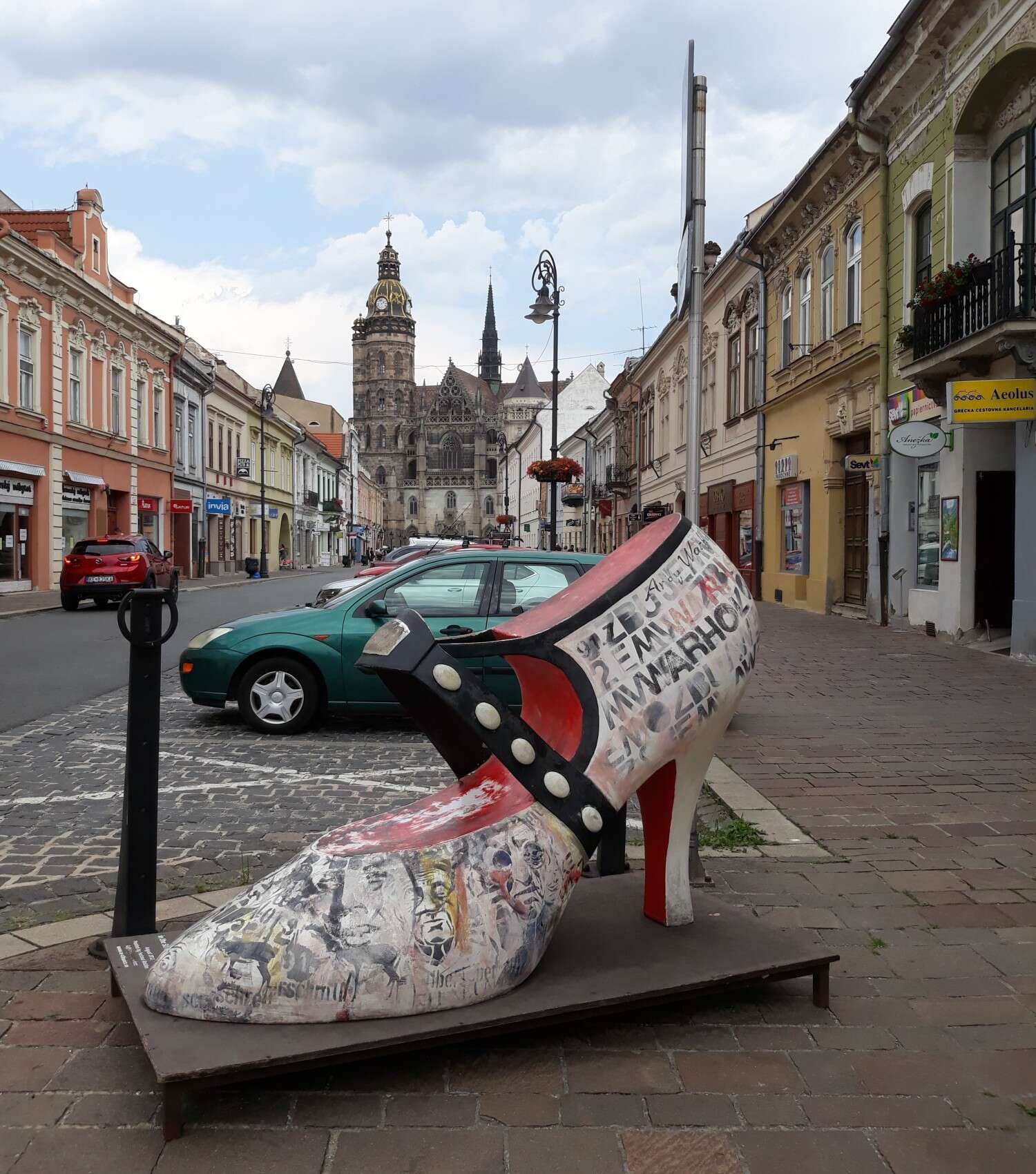 On Hlavná street, near the building of the National Theater, there are singing fountains, which are illuminated in the evenings. And in a small park nearby, a carillon is installed - 22 big and small bells, which begin to sound under the action of a special mechanism. It's a perfect place for a tired tourist, who can perceive the city through the luminous stream of water under the sound of bells. 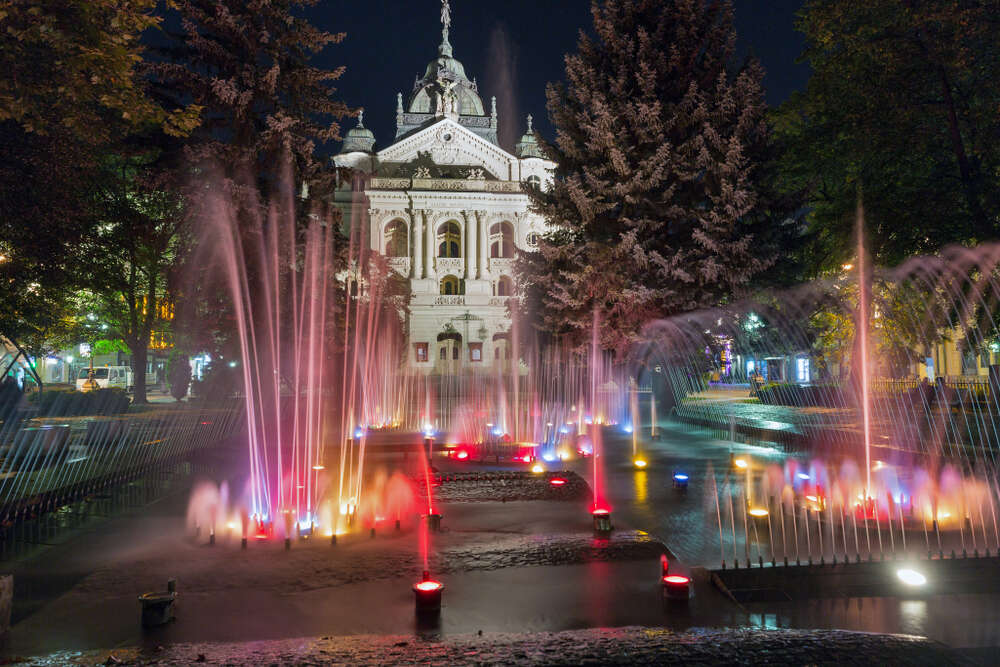 Another noticeable building in the center is the Plague Column of the Virgin Mary. It was installed in the XVIII century in memory of the victims of the plague epidemic and in gratitude to the Virgin Mary for getting rid of a deadly disease. In a circle, the column is guarded by saints and angels. 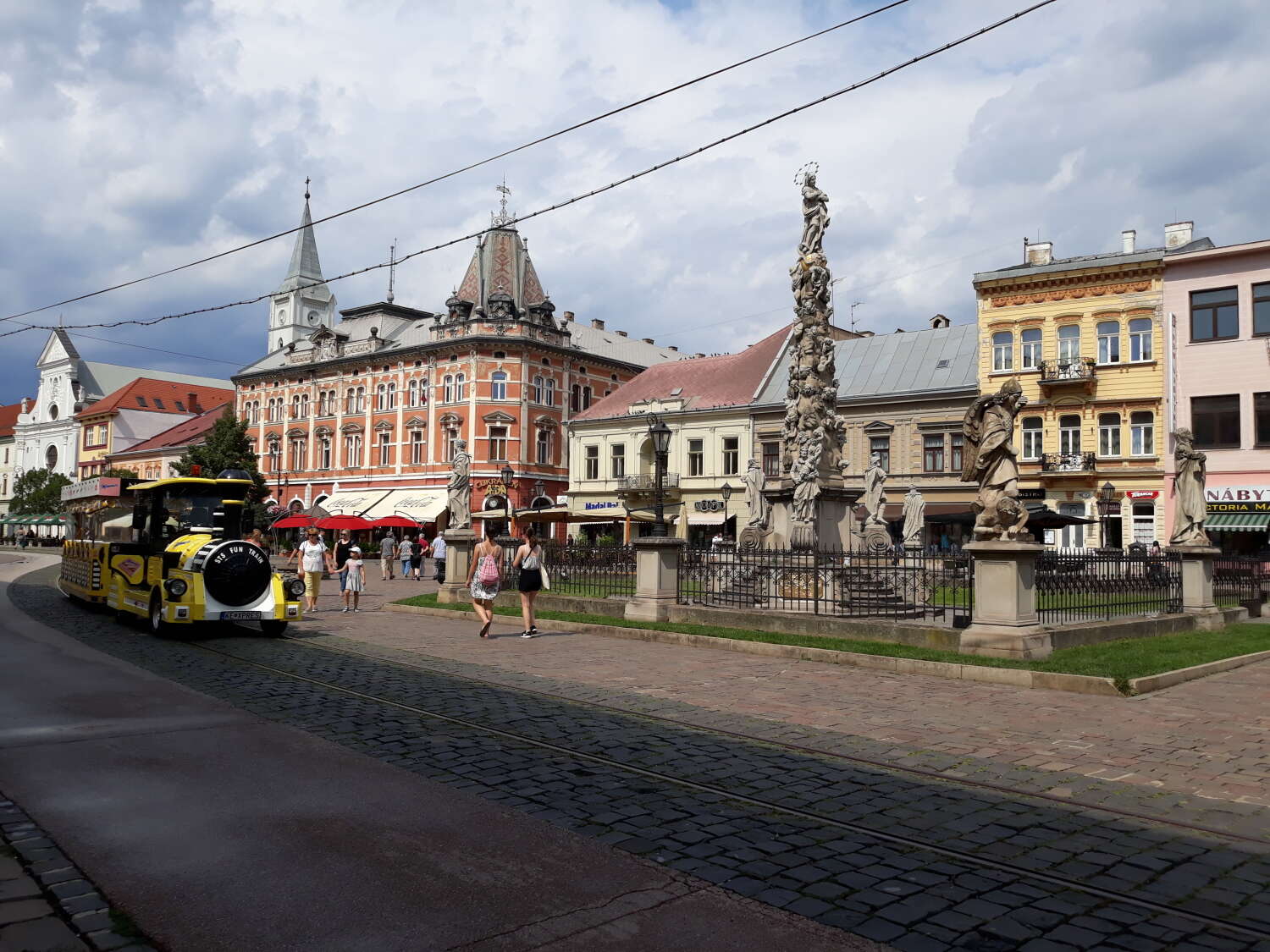 Kosice has many interesting museums. The East Slovak Museum, the oldest in Slovakia (created at the end of the 19th century), the museum of the sculptor Wojciech Leffler, the Michal Gallery, where the works of Andy Warhol are exhibited, the Slovak Technical Museum are among them.

There is a botanical garden and a zoo. 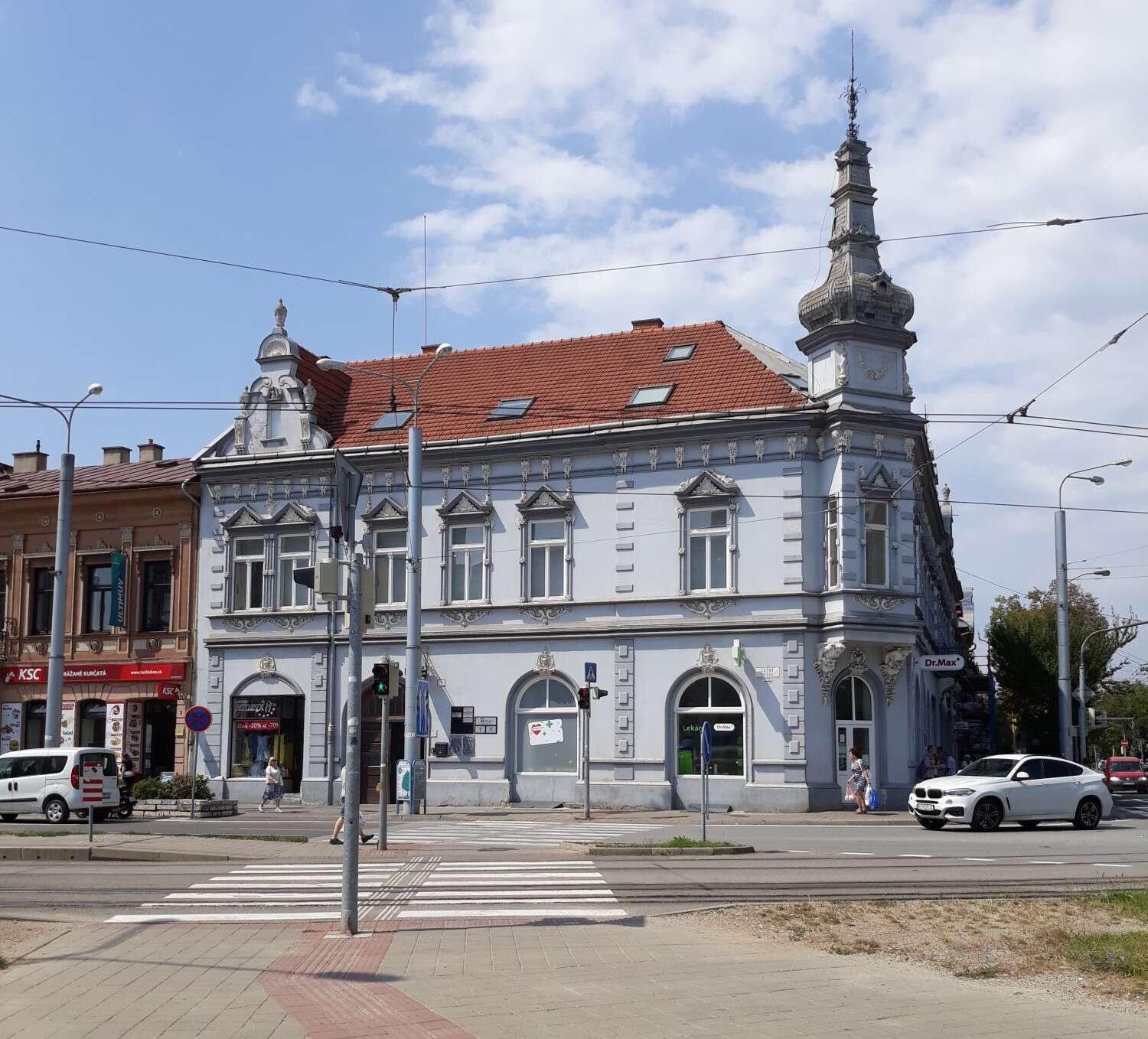 In 2013, Kosice was declared the cultural capital of Europe, the European city of sports in 2016, and the European capital of volunteering in 2019. Since 1924, every first Sunday of October, the oldest marathon in Europe has been held here. By the way, on the main street of the city, there is a monument to the marathon runner.

One day routes from Kosice

You can stay in Kosice for a couple of days and travel around the surroundings.

Herlany Geyser is 28 km from the city. In the century before last, on an inactive volcanic hill, people drilled an artesian well - they looked for mineral springs for the emerging resort. A powerful jet of mineralized water flowed from a well that was 404.5 m deep. Nowadays, within 25 minutes, the water hits a twenty-meter height with an intensity of 25-30 liters per second. A geyser erupts every 34-36 hours. Therefore, when planning your visit, see the schedule on the website. But since the geyser is controlled by nature, it can wake up a little earlier than the specified time, so it is better to arrive an hour earlier. 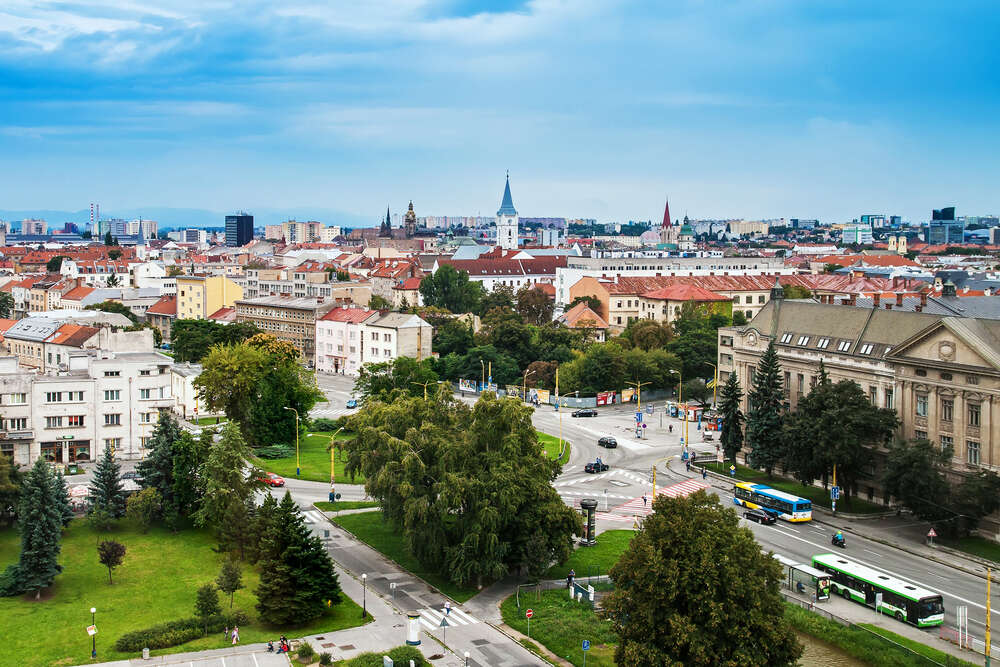 Another nearby fascinating journey, that you can make from Kosice, is to Jasovska Cave. Many centuries ago, it was discovered by a monk. In the Middle Ages, when danger was approaching, residents of the nearest village and monastery were hiding in a stone shelter. And tourists learned about the cave just in the century before last. The length of all its multi-level passages is about three kilometers, but the tourist route is 720 meters. You will have to rise and descend. The tour lasts 45 minutes. You can enter at certain hours and only from May to October. In addition to 5 euros for an entrance ticket, you need to pay for the opportunity to take pictures. Dress warmly (even in summer), as the cave is constantly 9 degrees warm and very humid. 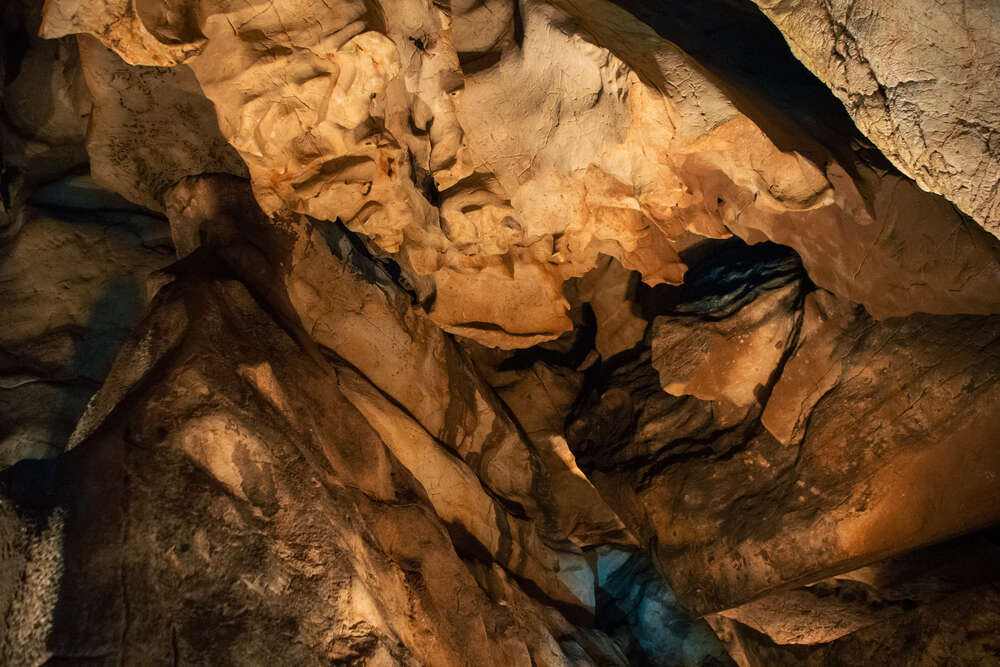 Bizarre forms of stalactites and stalagmites, a cave lake, fifteenth-century graffiti on the walls, bats arriving here for the winter ...

By the way, not only tourists come to Jasovska Cave, but also people suffering from various pulmonary diseases. This is one of the caves in Slovakia, where respiratory diseases are treated with speleotherapy. 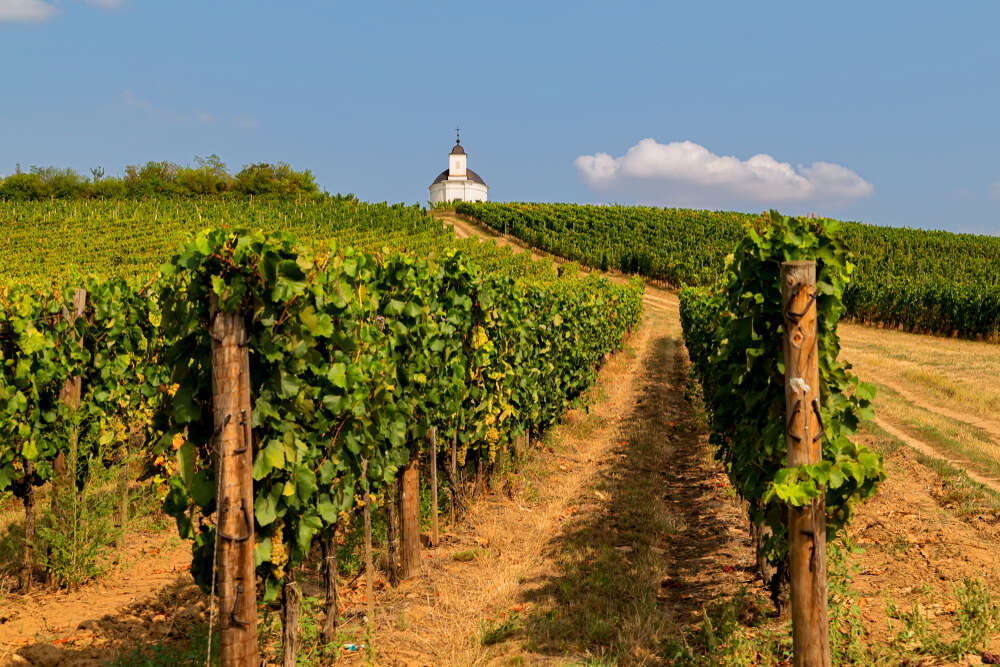 You can also go from Kosice to Tokaj wine cellars, the journey will take about an hour. Part of the Tokaj wine region is located on the territory of Slovakia on the border with Hungary. This day you will spend under the sign of the famous golden sweetish Tokaji in old cellars dug in soft volcanic tuff. 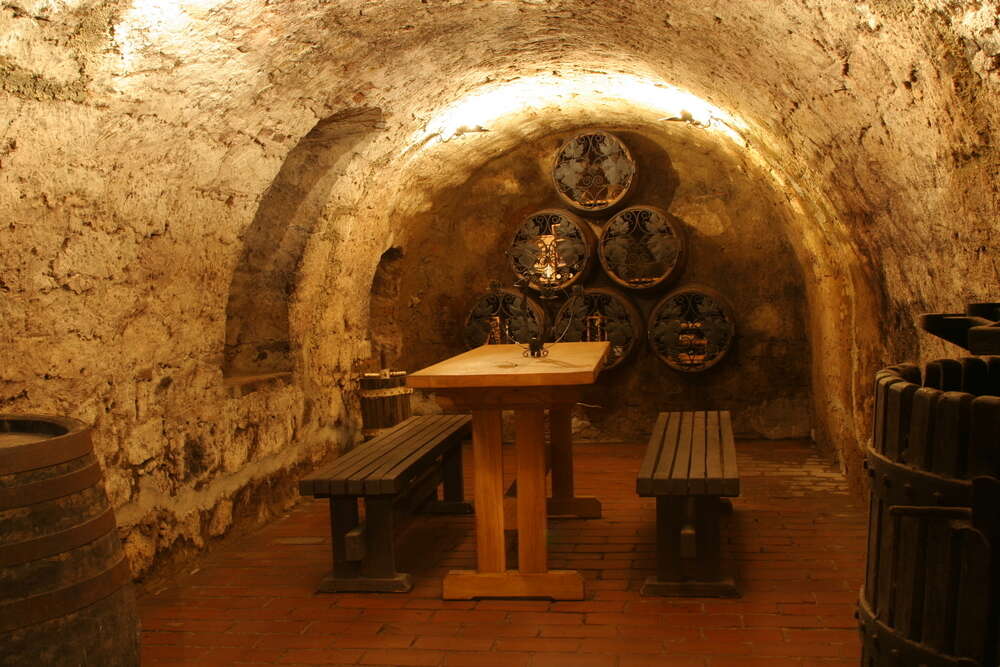 Continuing your journey through Slovakia, you can visit the cities of Poprad, Levoča, Roznava, Spisske Podhradie, Spisska Nova Ves. Each is interesting and is located about 70-100 kilometers from Kosice.

Or you can go straight to Paradise. Slovak Paradise. But more about that next time.