Beautiful, impressive and unexpected bridges of the planet

Not all bridges are just convenient structures for connecting rivers and valleys. Many of them are landmarks, some are symbols of cities and even countries. And tourists from all over the world flock to see them personally and take a walk.

Travellizy Team has compiled a list of Top Technological Wonders and Architectural Gems.

One of the world's most beautiful bridges and the best example of Persian culture is the Khaju Bridge. Construction dates back to 1650. The bridge is notable for its stunning stone foundations, brightly colored tiles on the outside, and original images on the inside dating from the 17th century. The two-level construction is very practical: it connects the banks of the Zayanderud, serves as a dam, dividing the river into 2 parts, and is a favorite resting place by the water in a hot region. 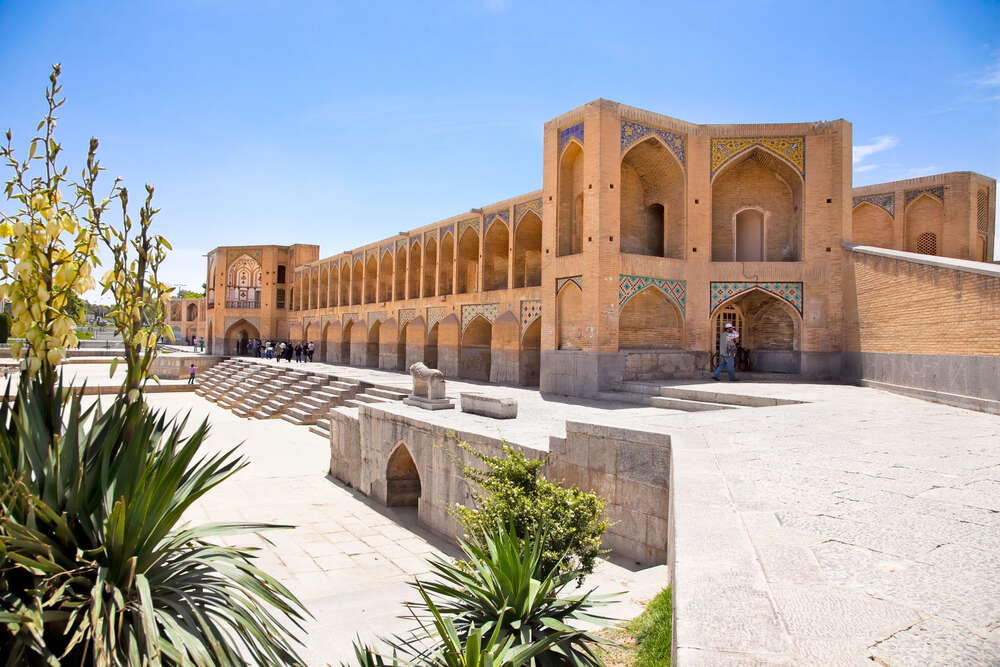 Previously, the lower level of the bridge was used by pedestrians, and the upper level by carts. The structure is decorated with 23 arches. The octagonal pavilions offer a magnificent view of the city and the river. The vibrating acoustics attracts local singers and musicians who perform here on Fridays.

Tourists get to the sights by walking along the embankment of the city of Isfahan. The inspection of the bridge is free.

The Ponte Vecchio, a medieval arched bridge, rises above the narrowest point of the Arno River in Florence. It was built in 1345. During the Second World War, it was the only bridge that the Germans did not touch while retreating. There used to be a medieval meat market on the territory of the bridge. But there were so many people willing to trade that it was necessary to construct additional stores hanging over the water. They still exceed beyond the bridge. Today, there are many souvenir and jewelry shops here. 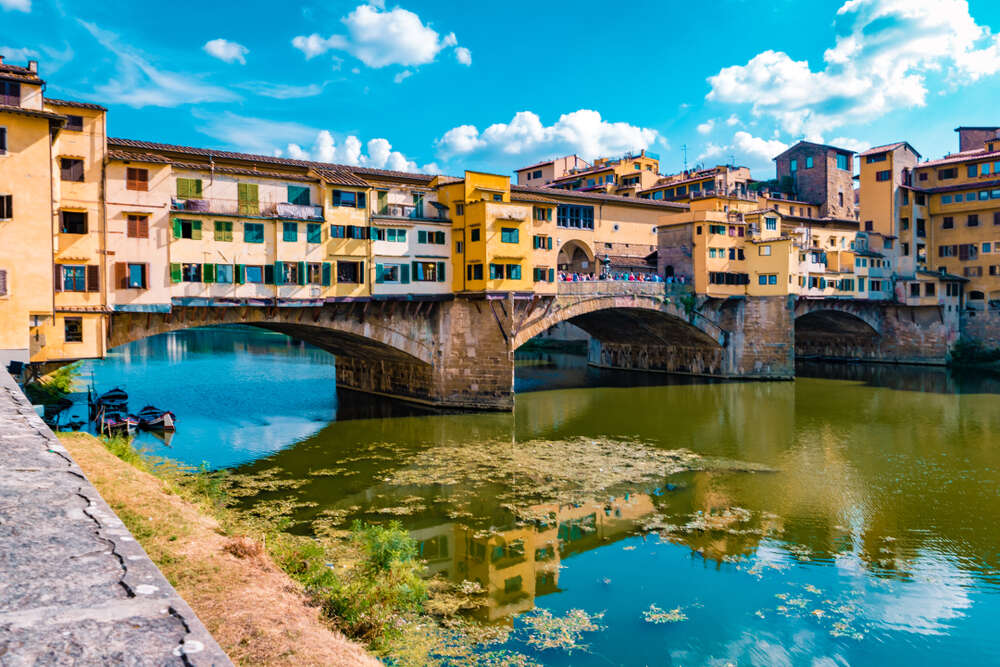 Travelers get to the bridge by buses C3 or D (Ponte Vecchio stop). And you can walk on it completely free of charge.

The Vltava River in Prague is crossed by the stone Charles Bridge. It is 621 m long and 10 m wide. It is set on 16 arches. It is decorated with an incredible alley of 30 Baroque statues. It should be noted that today's statues are just copies of historical monuments. The original monuments were transferred to the National Museum many years ago. Travelers love the atmosphere of the bridge. People rush here to enjoy a stunning panoramic view of Prague Castle. And, of course, they want to take the best selfies. 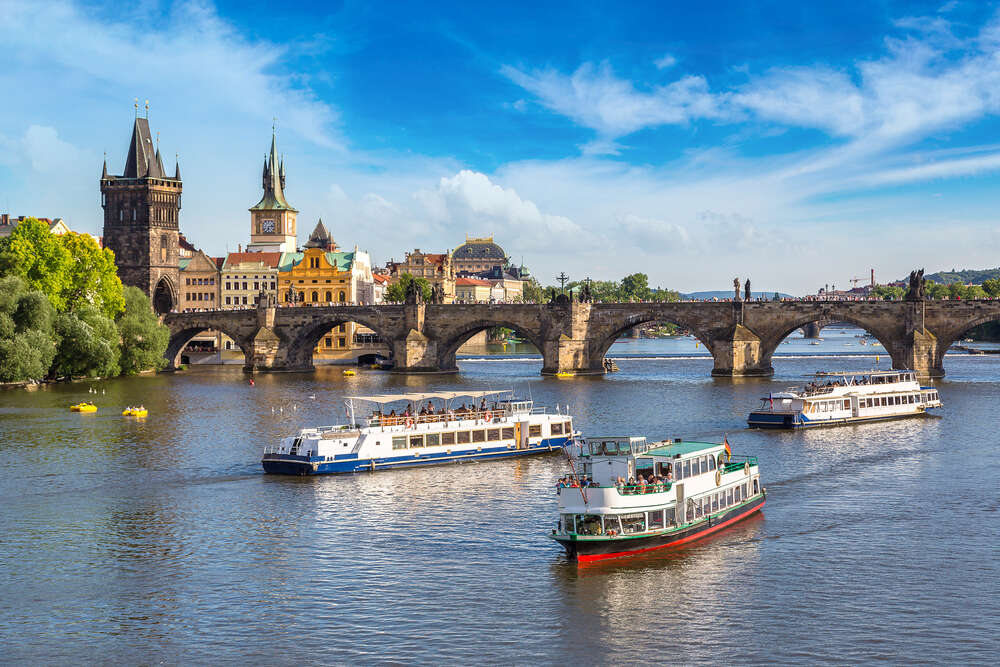 The bridge can be reached by trams # 17 and # 18 (Karlovy lázně stop). Take the metro: line C to Staroměstská station, and line A to Malostranská station.

The banks of the Danube River in Budapest are united by the Chain Bridge. In the year of construction, in 1849, it was a true wonder of the world and was the world's largest bridge. In the evenings, the bridge is illuminated with hundreds of lights, highlighting its classic shape. 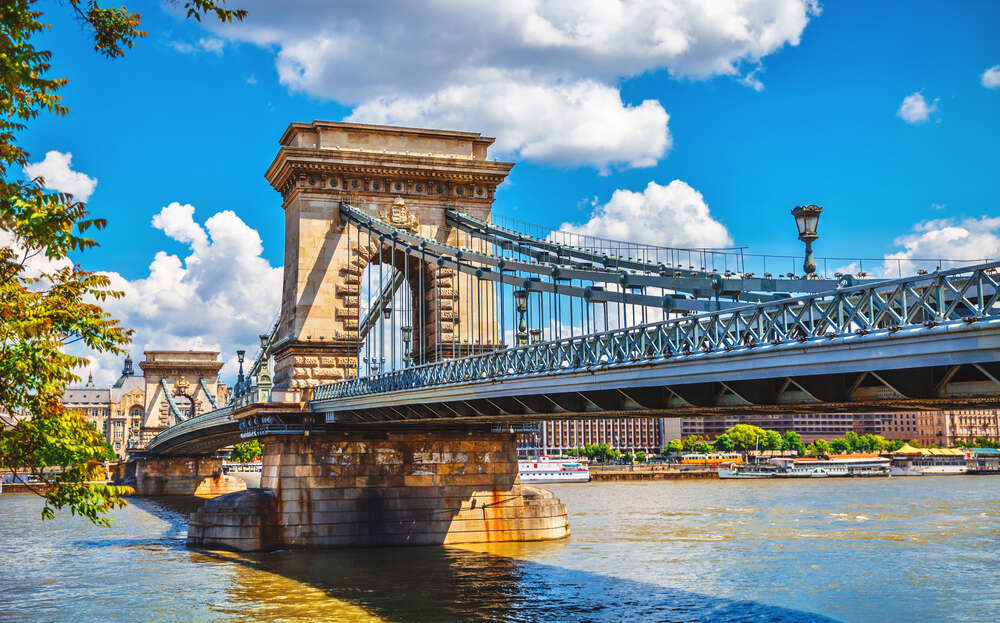 In 2010, the Helix pedestrian bridge was designed in the form of a DNA molecule in Singapore. There are four observation platforms built into the structure. The smart bridge is partially glazed. At night, the miracle of technology independently controls the illumination of neon lights and provides climate control inside. 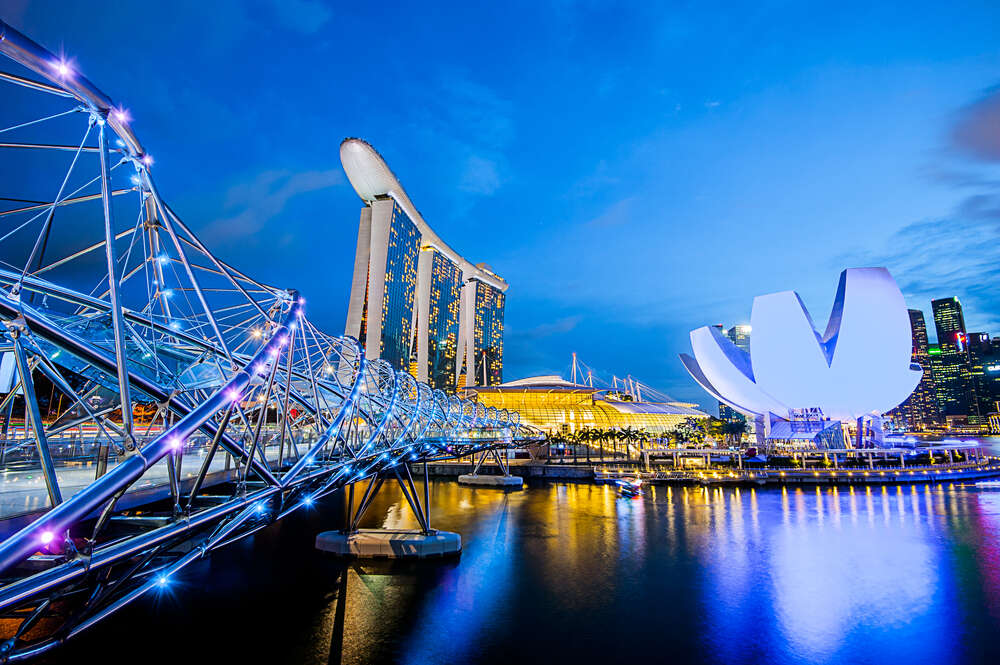 Travelers get to the bridge by metro to the Promenade MRT station.

The Brooklyn Bridge is called an iconic structure and an industrial wonder of the world. It is one of the oldest suspension bridges in the USA, 1825 m long. It is divided into a car area and a pedestrian one. The structure includes two 83 meter tall Gothic towers. And in 2006, an entrance to a bomb shelter was found in one of the walls. The walk across the bridge takes 45 minutes. But tourists, of course, walk along it much longer, enjoying the views and constantly finding new angles for photo reports on their social media. 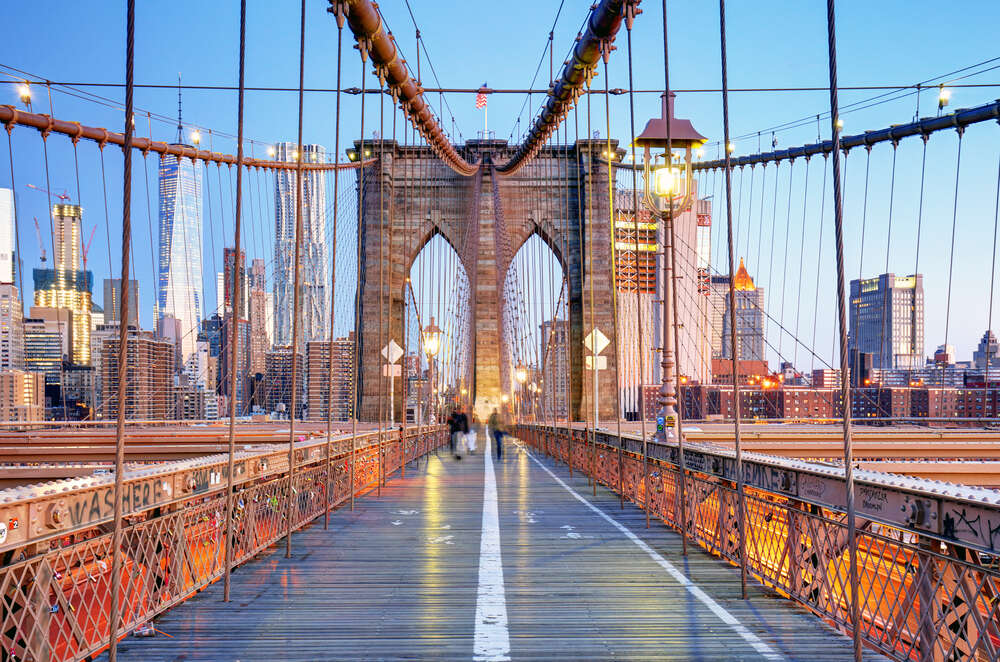 A beautiful three-level bridge with ancient history and a melodic name is located in China. In 1916, it was created by the best masters of the Dong, a nationality inhabiting the vicinity of the Guizhou province. It was erected from solid wood and stone slabs. The 64-meter bridge is complemented by 12 pavilions and 5 verandas. 5 stone platforms serve as supports. Interestingly, the construction of the bridge was recreated like a 3D puzzle, each part of which fits perfectly with the next. Therefore, not a single nail was needed to create such a unique attraction. 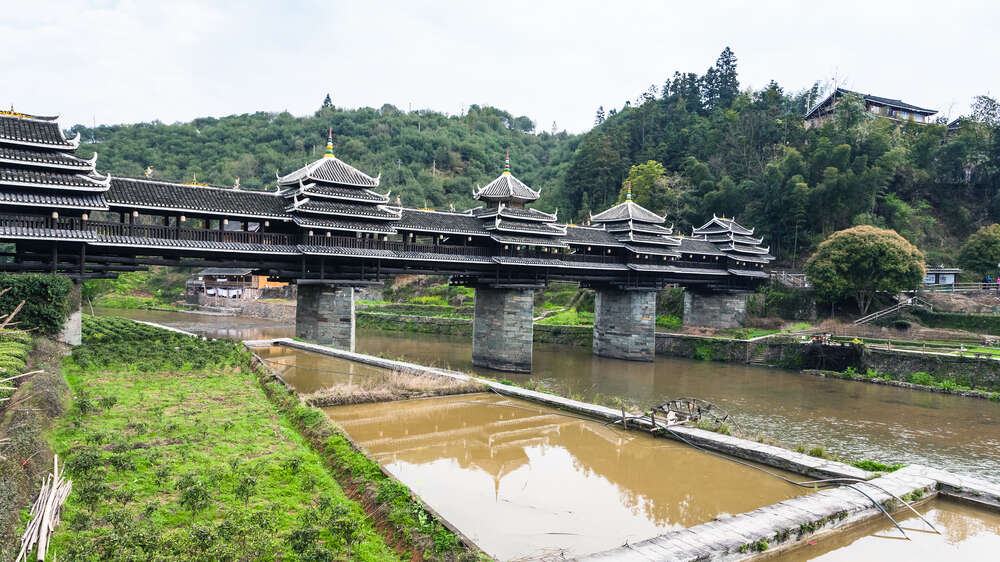 Banpodaegyo double-deck bridge across the Han River is remembered for its special Moonlight Rainbow Fountain. 380 water jets dazzle with colorful lights after sunset. Due to the uniqueness of the hydrostructure, the bridge-fountain is musical, as it dances to 100 melodies. The fountain jets are located along the edges of the bridge and are directed downward. The water from the river not only pleases with its beauty, but also undergoes purification, erupting from the fountain. In 2008, the bridge was listed in the Guinness Book of Records as the longest fountain bridge on the planet. 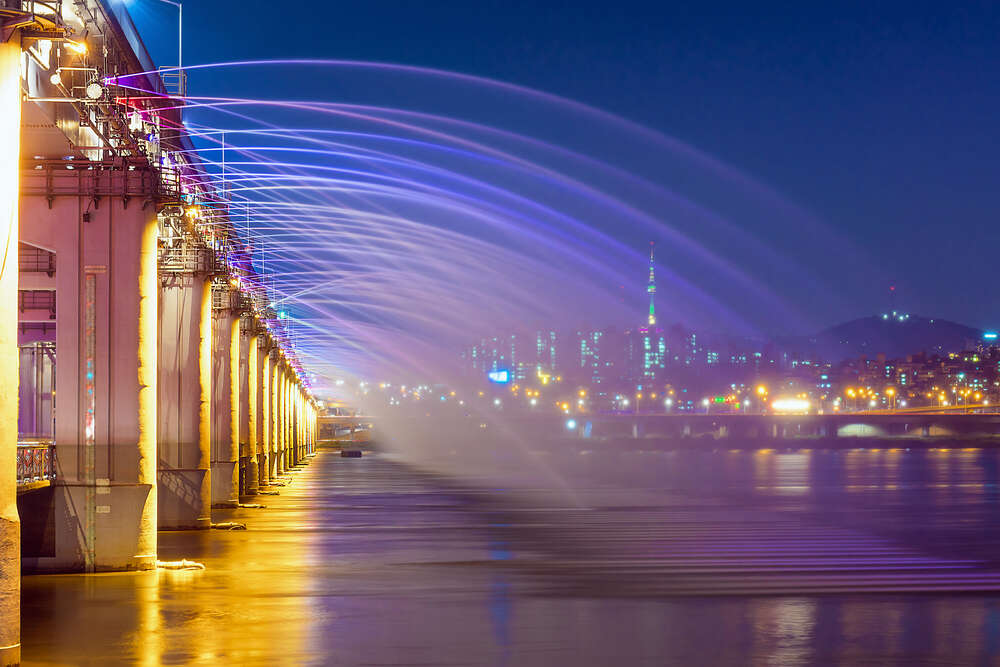 The most convenient way to get there is by metro to the Express Bus Terminal Station.

In Great Britain, the Millennium, the world's first tilt bridge, stretches across the River Tyne. The uniqueness of the design is that as soon as a ship approaches it, the pedestrian part of the bridge rises by 30 degrees, allowing the ship to pass. And then it returns to its original position. The process takes only 4 minutes 30 seconds. Pedestrians and cyclists love to walk along the 126 m long bridge. 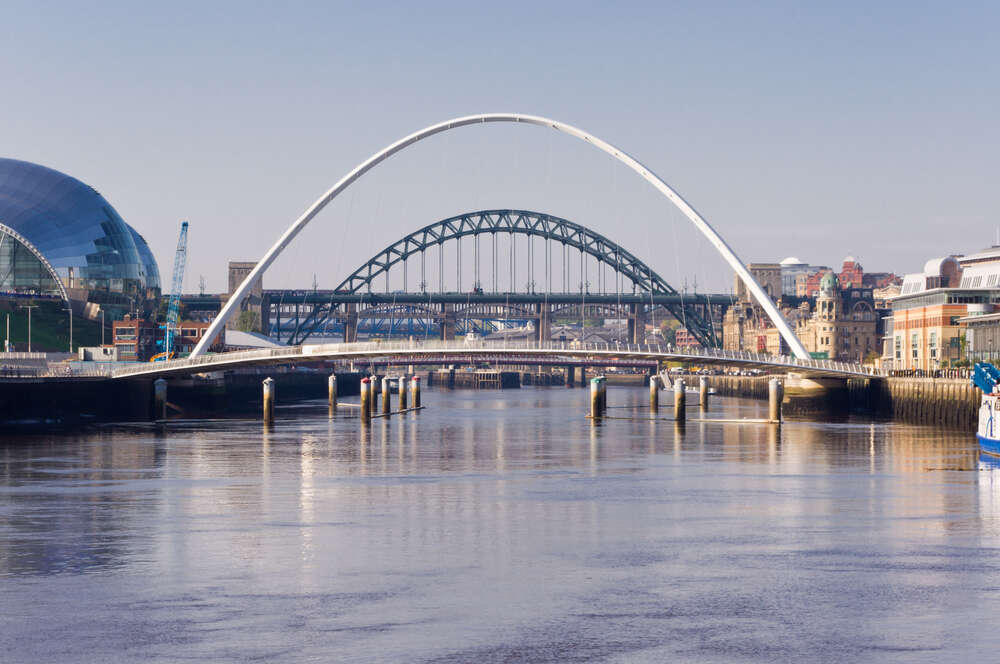 Interestingly, the structure cleans up after itself. All debris is automatically rolled into special tanks during the turn.

The closest train station to the bridge is Newcastle Central Station. From here, you can walk to the sights in 15 minutes.

In 2011, a stunning bridge, known today as the Moses Bridge, appeared in the Netherlands. A 51 meter long pontoon for tourists was built in the moat surrounding Fort De Roovere. The uniqueness of the structure is that it creates the illusion of parting waters, repeating the story from the Bible and the escape of the Israelites from Egypt. The pedestrian zone for tourists is located below the water level. In fact, the structure is sunken in the waters around the fortress. The architects used sustainably farmed wood with additional waterproofing. It is believed that the duration of its use should be at least 50 years. 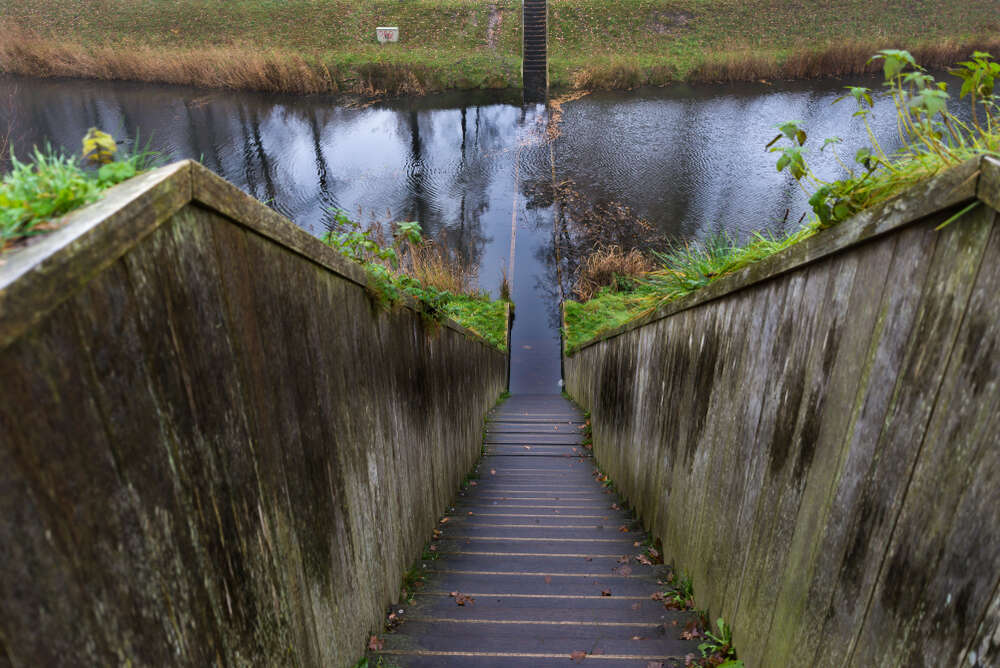 Another unexpected hydraulic bridge is located in London, in the Paddington area. The folded structure is similar to a mill wheel. One of its ends is attached to the ground, and the other, when it unfolds, simply lies on the other side. The steel figure of the octagon is located on the Grand Union canal.

You can see the opening and closing of the bridge every Wednesday and Friday at 12:00, as well as on Saturday at 14:00.

Tower Bridge in London, Golden Gate Bridge in the USA, Pont Alexandre III in France... Do you think Travellizy's experts missed an important attraction? Feel free to comment the article.