The world's most famous deserts

When you hear the word "desert”, you imagine endless expanses, dunes, which sometimes reach the height of 300 meters, barchans and the sound of the wind in the eternal sands, shimmering under the sun and drowning in endless night. Areas that create an incredible sense of isolation from civilization and constitute some of the most amazing landscapes on the planet.

Mysteries of the desert

The desert is not a mountain of sand at all. This is a special ecosystem with its own vegetation, fauna and even... people.

Did you know that deserts have colorful mountains? Their shades depend on certain metals and minerals.

There are black hills - this is where many stones, including valuable rocks are located, there are red ones with deposits of iron, according to old-timers, there are white ones - the purest silicon, or sand. So, it turns out that lifeless surfaces on Earth are not so useless.

The desert sunset is especially beautiful. If you are lucky enough to visit the desert at this time, you can see an endless overflowing of yellow, orange and red. The sun falls right behind the line of sand very quickly creating an optical illusion. In the desert, night falls almost instantly, and the stars go so low that the constellation threads are visible.

Travellizy Team has prepared a story about the world's most beautiful and mysterious deserts.

Antarctic Desert, the largest desert on the planet

What is the largest desert on Earth? Quite a simple question, isn't it? However, most people will give the wrong answer.

To understand the question, one must understand the definition of “desert”. It is an arid region that receives less than 250 mm of precipitation annually and has a characteristic predominant loss of water through evaporation rather than the region receiving it as precipitation. 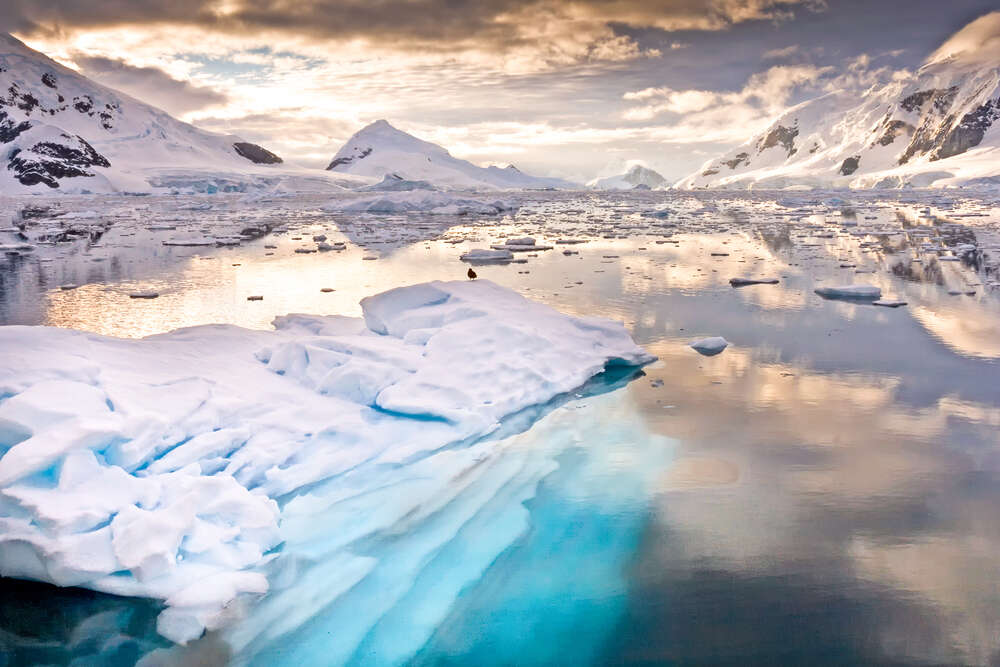 Considering these signs, it turns out that the largest desert in the world is the Antarctic Desert. The annual precipitation here is 51 mm. The area is 13.8 million square kilometers. This desert is characterized by the strongest storms with the wind speed up to 320 km/h.

Sahara, the hottest desert on the planet

The largest desert is located in northern Africa. It entered the Guinness Book of Records as the largest hot desert on Earth. Its size is 8.6 million km², it stretches 4800 km from west to east and up to 1200 km from north to south. Thus, it occupies a third of the entire African continent. In terms of area, it can be compared with Brazil. Apart from small sections of the Niger and Nile, there are no more rivers in the Sahara. 50 mm of precipitation falls here during the year. It is five thousand kilometers covered with sand.

Chebbi, the only erg of the Sahara, is located in the southeast of Morocco. The length of the sand dunes of this erg is 22 km from north to south and 5 km from west to east. The dunes can be up to 150 meters high, so they are popular with tourists. However, in the entire history of the desert, tens of thousands of people have disappeared in its vicinity. Tourism has developed since the 2000s, when the Moroccan authorities built a road skirting the dunes. 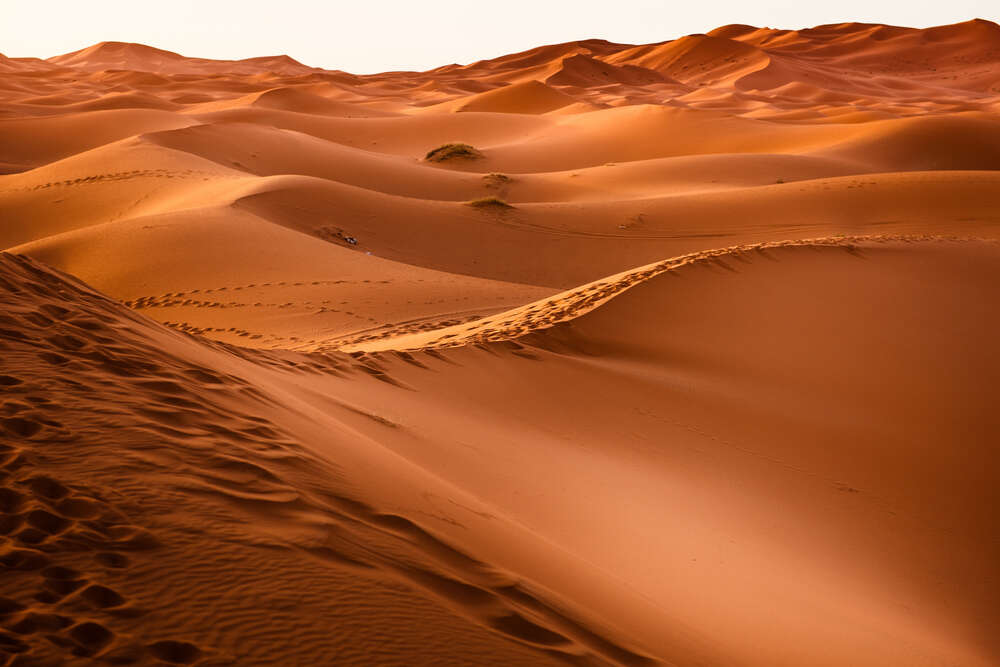 The Sahara has been known for more than two millennia. Herodotus, the ancient Greek historian, described the gloom of the Sahara in his writings, and Pliny, the Roman historian, noted that rain was a rare phenomenon in the Sahara, and its inhabitants were very careful about water.

Meanwhile, archaeologists suggest that millions of years ago, the Sahara had rivers, lakes, and, probably, an ocean, since whale fossils were found in the sands.

The biggest mystery of the Sahara is the ring structure called Guelb er Richât with a diameter of about 50 km, which can be seen even from space. Part of the scientific world believes that Richât is the remnants of Atlantis, a highly developed ancient city that belonged to a mysterious unknown civilization. Plato, the ancient Greek philosopher, described the size and architecture of the rings just like that. 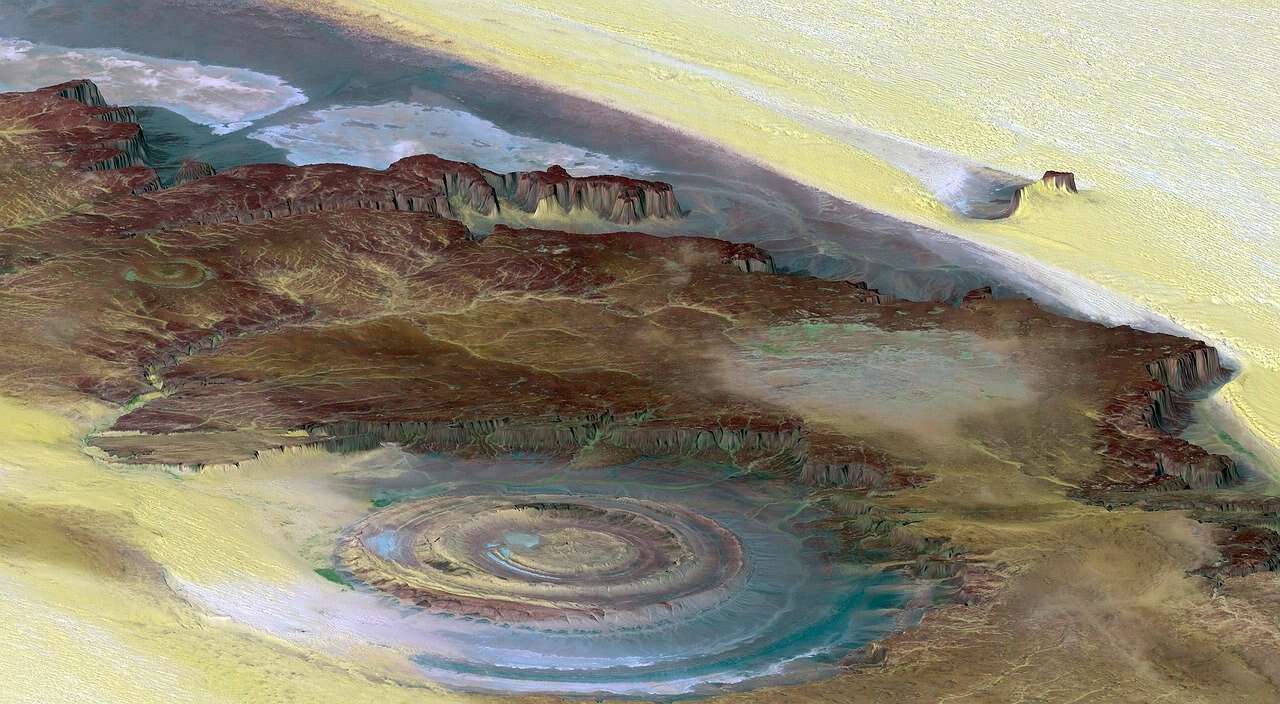 Richât is often called the Eye of the Sahara: its rings are located inside each other, the voids between them could have been filled with water in ancient times.

According to another theory, the Eye of the Sahara appeared about 500 million years ago. At this place, an explosion of incredible power accured, possibly due to a meteorite fall. This is confirmed by the chemical elements that scientists find in glass and iron.

Near the rings, rocks were found, which are not found anywhere else in the world. Physicists believe the rocks are solidified lava.

Along with the oceans of the Earth, the Sahara Desert remains the least explored. Scientific expeditions and archaeological excavations are prohibited on the territory of the desert.

Gobi, the largest desert in Asia

The desert stretches in an arc of more than 1600 km across the northern provinces of China and the southern third of Mongolia. This is the largest desert in Asia. It is customary to divide the Gobi into the Trans-Altai and Mongolian Gobi, Alashan, Gashun Gobi and Dzungaria. 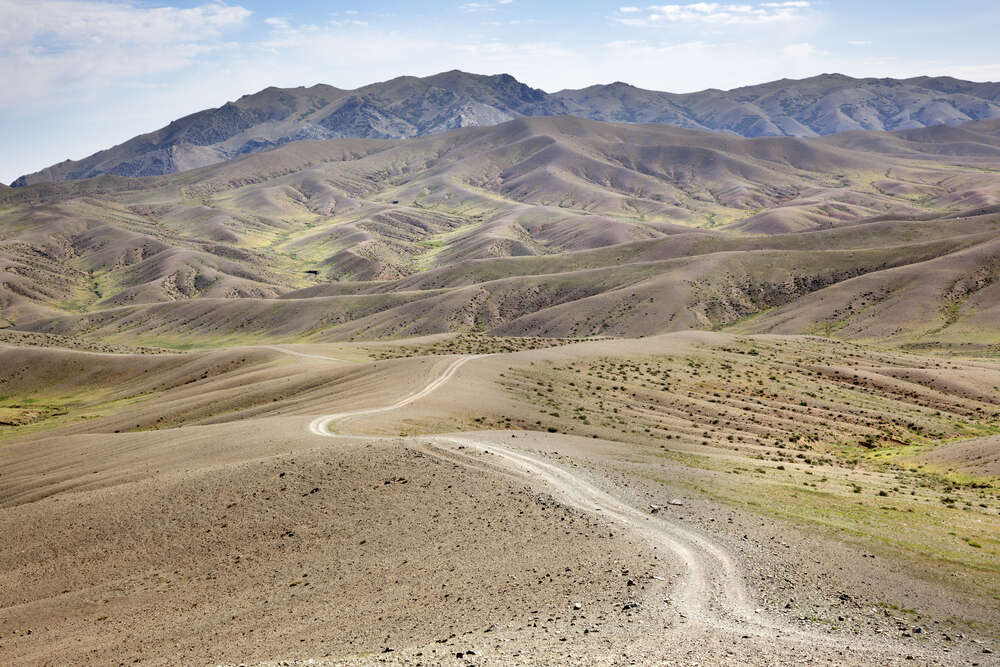 The Khongoryn Els in the Gobi

There are not many open accumulations of sand in the Gobi. In general, the idea of ​​a desert, where hundreds of kilometers are covered with sand, is wrong. The sands are always isolated. Their origin is due to the activity of ancient rivers, when at some point in their history, they were large and produced sand deposits and winds. Winds in some landscapes can have a traditionally stable direction, and therefore, they can create or keep large masses of sand in one place, or create an isolated barchan of great height. Sands, of course, are found in the Gobi, but there is no longer such a huge massif, as many sands are covered with a layer of dark deposits in the form of sand or pebbles, and black volcanic sand may also be the cause.

One of the largest and most unusual sand dunes is the Khongoryn Els, or the Singing Sands. The attraction is a large area of ​​accumulation of sands, barchans and high dunes up to 300 meters high, and reaches sizes ranging from 5-15 km wide and up to 150 km long. The Khongoryn Els consists of sands of different colors: light white, yellow, blue, pink or red at sunrise and sunset. 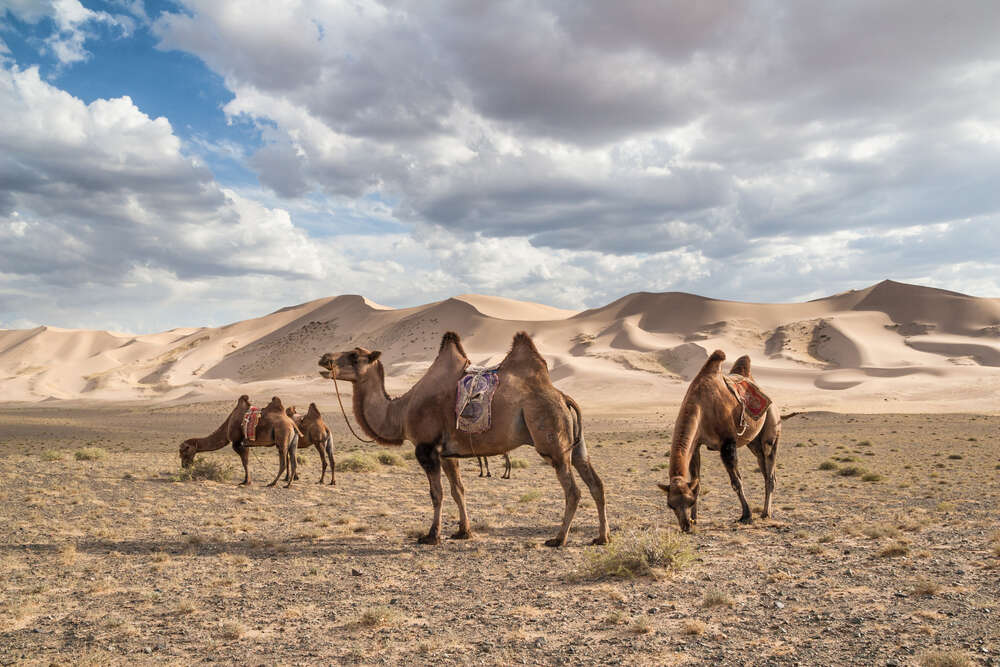 Yueyaquan Oasis in the Gobi Desert

The Gobi's landmark is located 6 km from the city of Dunhuang, in Western China. Yueyaquan, Crescent Lake, is an incredible oasis. It's the most important attraction in the region, home to one of the world's greatest Buddhist temples.

After the restoration works, Crescent Lake became a UNESCO World Heritage and, thanks to the surrounding desert, is very popular among tourists who are offered camel or jeep rides. 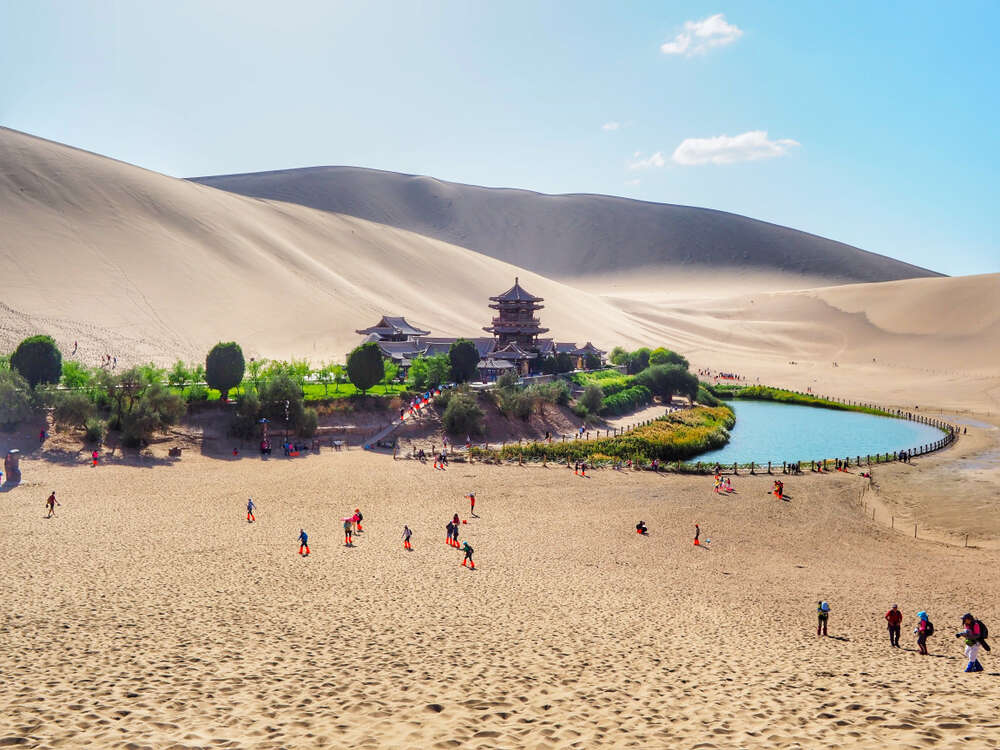 Atacama, the driest desert on the planet

The driest place on the planet is the American Atacama Desert in South America, which spans a 1,000-kilometer strip of land on the Pacific coast west of the Andes. The Atacama Desert is the world's driest desert, according to NASA, the National Geographic Society and many other sources. It receives an average of 101 mm of rainfall over a THOUSAND years! Believe it or not, it hasn't rained in some parts of the Atacama for about 400 years.

The Atacama originates at the Peru-Chile border and stretches to the south for 1000 km. In the east, it borders on Bolivia and Argentina, in the west - on the Pacific coast. The total area of ​​the Atacama is 105 thousand km².

Due to its location, the air is thinner here, which causes a high level of radiation. That is why this desert is partially completely uninhabited. 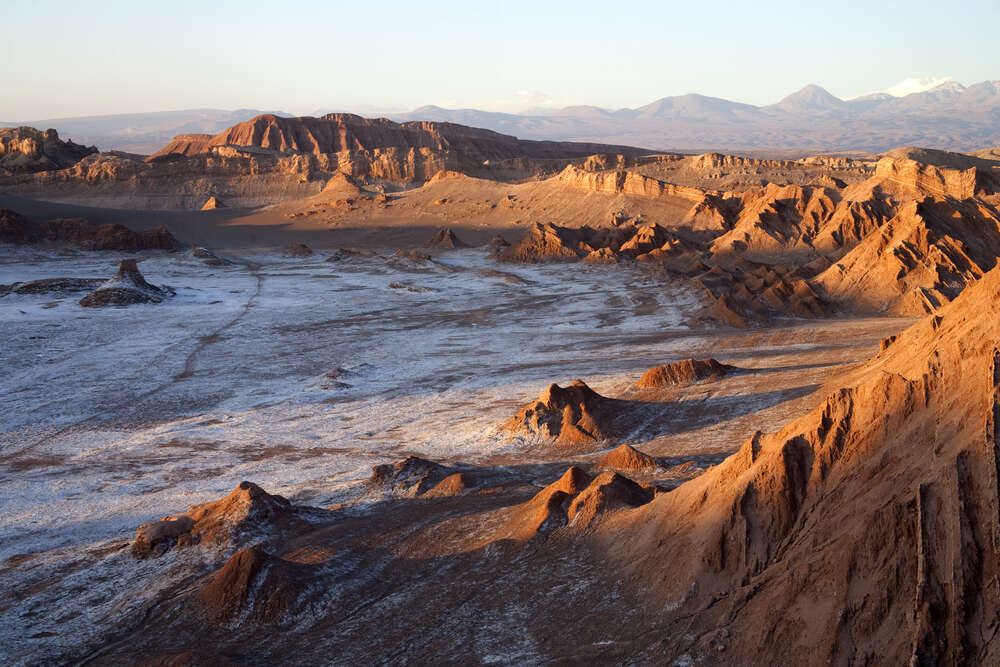 The average daily temperature in Atacama does not exceed +25°C. Therefore, unlike the Sahara, in the Atacama, it is dry, but still cool enough. The local flora and fauna are saved from complete drought by thick fog. When cooled, it condenses, leaving small water droplets behind. This is how small islands of vegetation (lomas) isolated among the lifeless desert, where cacti and even ferns are found, receive moisture.

The Atacama is home to the Valley of the Moon, Death Valley, and ALMA, the world's most expensive stellar observatory. Tourists are given candies, teas, cookies made from coca leaves as a medicine for altitude and impressions.

Namib, the oldest desert on the planet

The Namib Desert with its red sands is the oldest desert on the planet. It has existed for 80 million years and was formed during the time of the dinosaurs. It is located in the southwestern part of Africa and stretches for 1900 km along the Atlantic coast.

For centuries, the Namib Desert had a bad reputation: it was easy to die here from the heat and burning sun. The sand is heated up to +60°C. It is here that the world's highest sand dunes are located. Some of them are located on a sandstone terrace and reach 300-400 meters (an average of 350 meters, called Big Daddy or Crazy Dune). 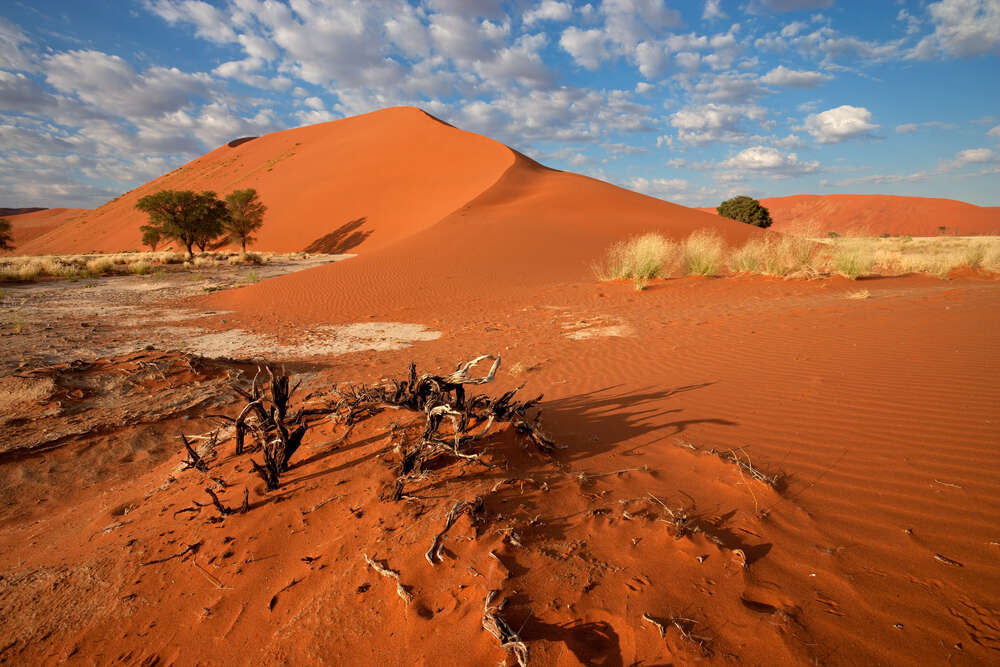 Dead Valley in the Namib

In the central part of the Namib Desert, there is the Sossusvlei clay plateau, famous for the world's highest red sand dunes, and the famous Dead Valley (Deadvlei). About 900 years ago, the dunes blocked the river bed and cut off this area from the water, and then the valley was formed. It is a dead forest blackened by the sun, like a white clay bowl, which is шт fact a dried-up oasis. Another amazing natural wonder of the world. A real struggle for life took place here, the lack of water forced the roots of the trees to go out in search of moisture. The site is surrounded by rusty orange giant sand dunes that form a contrasting backdrop.

An unforgettable experience is climbing the world's tallest red and gray sand dunes at sunrise or sunset, as their peaks offer views of the creations of the wind - rock formations, valleys and plains, and the sun rays turn the sand of the dunes into a huge variety of pink, yellow and purple tones. 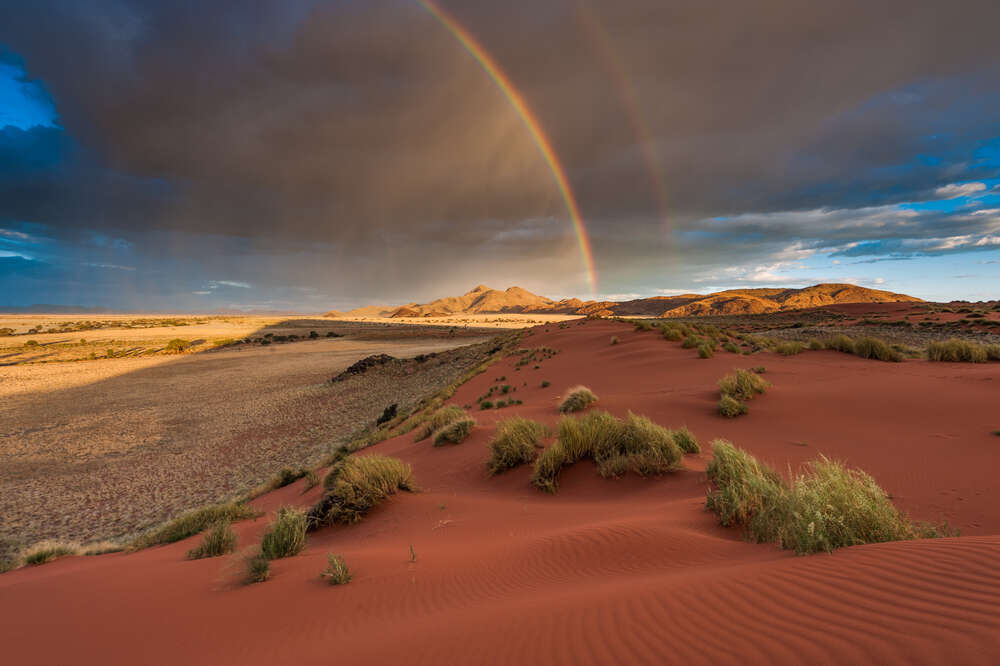 Our planet has so many miracles! It is difficult to describe the sensations from the perception of such a completely different land. High mountains of sand, sharp edges of dunes, sand flowing like drifting snow, wavy cover of dunes of different wave depths and frequencies, bizarre plants and roots, traces of animals and insects, sand flowing through your fingers... We can say without exaggeration that deserts are amazing places on Earth, and everyone must see them not only in the movies, but also with their own eyes.