Get lost in the expanses of Salar de Uyuni, Bolivia

Bolivia may not be the most tourist destination. And not many travelers have followed its paths. But all efforts to get there will be rewarded. Indeed, one of the most unusual species in South America is the local Uyuni Salt Flat. On the map, its remoteness and desolation becomes not only an incredible adventure, but also a challenge in terms of logistics.

Travellizy's experts will tell you about the amazing salt flats and show you how to plan your trip properly.

Uyuni Salt Flat is one of the driest places on the planet, and the largest plain on Earth. It occupies 6,500 km2 of the vast Altiplano plateau. The plateau has been preserved since the days of prehistoric lakes, which have already evaporated. And a thick crust of salt stretches all the way to the horizon. Layer thickness is from 2 to 8 m. 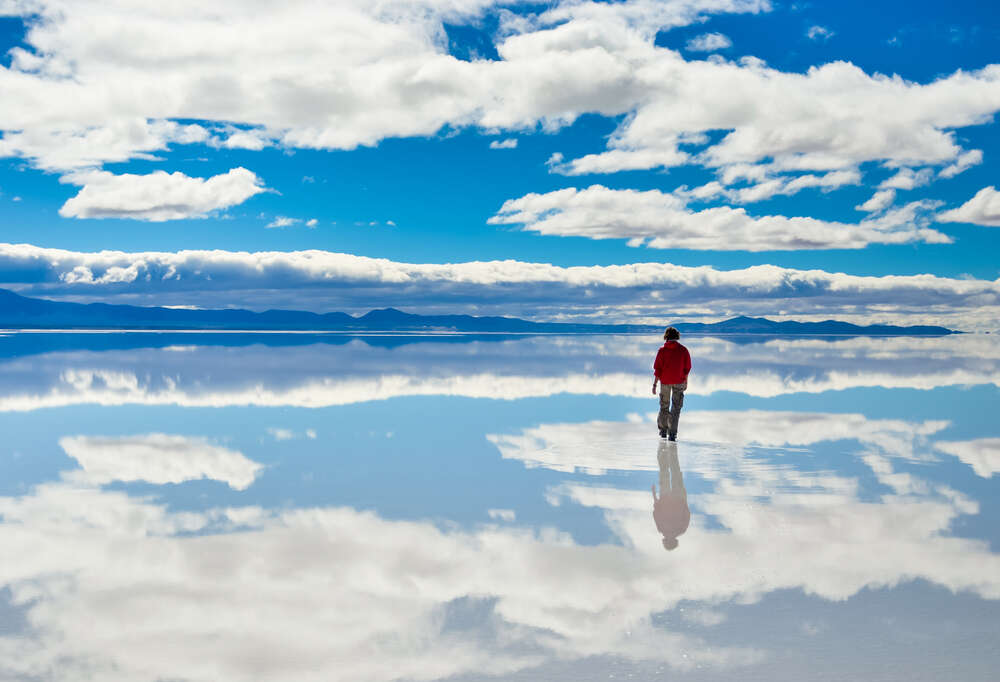 The landscape of the salt flats is breathtaking and delightful: an immense field of dazzling white salt, contrasting with a bright blue sky. Every year during the rainy season, water overflows the banks. It is at this moment that a layer of water covers the salt desert. And the entire salt flats become like a giant lake or mirror, which reflects the endless blue sky.

This area produces 20 tons of salt annually. And the reserves are estimated at up to 10 billion tons. It also contains lithium, which is used in the production of smartphones, laptops and electric vehicles. And despite the fact that there are no animals, flamingos visit these places in November.

The entrance to Salar de Uyuni is decorated with salt mounds in the form of small pyramids. They brighten up the landscape. You can climb them and jump off for emotional photos. But remember, the surface of the salt is spongy and difficult to land on. 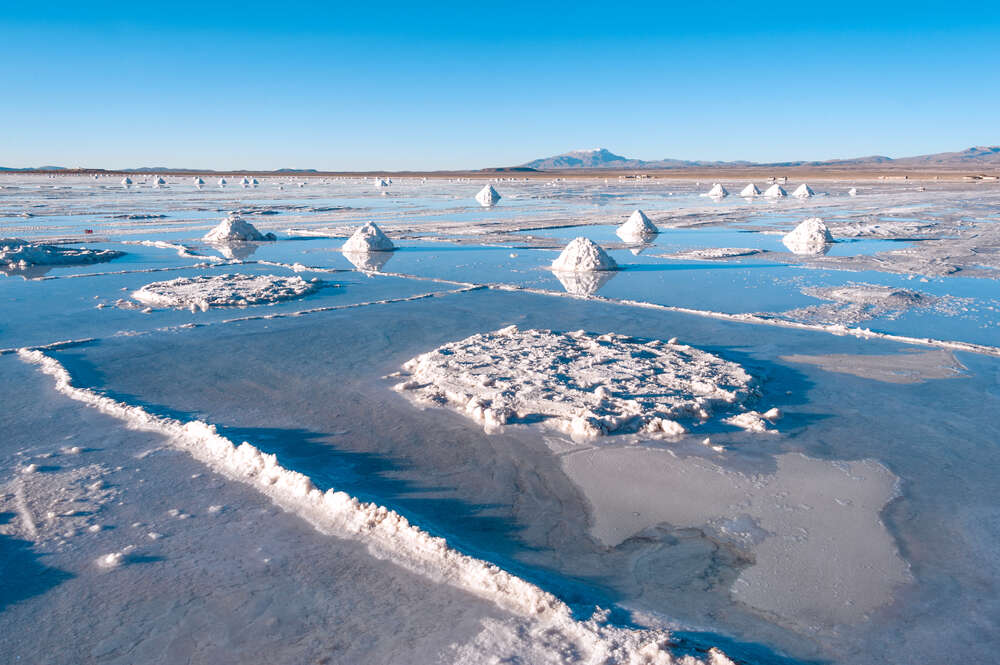 There are also pools with sulfur. It is believed to have healing properties. It is not unusual to see a person taking healing baths with their feet in the water.

Entertainment on the Uyuni Salt Flat

There is no infrastructure on the territory of the salt flats. Therefore, tourists entertain themselves by letting their imagination run wild and creating surreal photographs. Professionals love to get here during sunrise or sunset for shooting the nighttime stars.

An endless horizon is one of the main reasons why tourists and professional photographers come to this natural attraction. Playing with depth of field and perspective, travelers fight dinosaurs, crawl out of huge cans, and cook each other in frying pans.

The secret of taking such photos is in placing the camera low on the ground, right near the edge of the subject. This creates the illusion that the object (for example, a jar) is larger than the person who is a little further away. 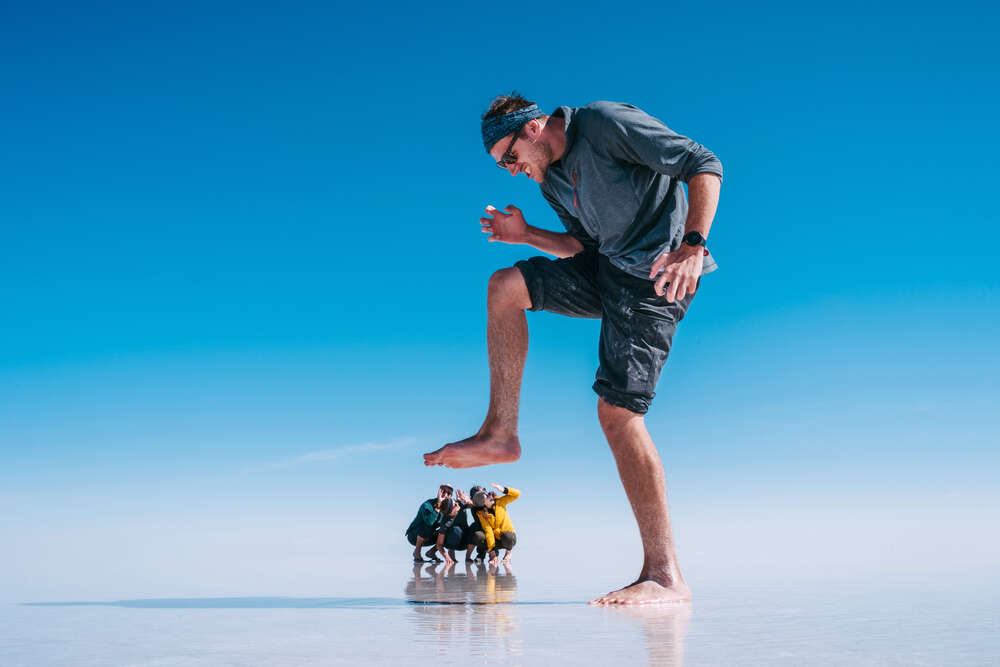 An integral part of the trip is the presence of props. Get creative and get ready for some fun photos. For the photographer, it is important to grab a rug to comfortably sit during shooting. After all, the success of a photo shoot lies in the fact that the photographer lies on the ground.

When choosing clothes for the trip, opt for bright colors. They will help you stand out against a white background. And don't forget about the glasses, because the salt flats are always dazzlingly bright.

What else to see in the vicinity

Despite the fact that Salar de Uyuni is the most important attraction in Bolivia, it is only part of the beautiful Altiplano region. In its vastness, you can visit volcanoes, deserts, alpine lakes and hot springs, geysers.

The Cemetery of Trains is a wonderful place for new photos. It was formed in the 1800s. Then the British built a railway and sent trains to the country to make it easier to transport minerals. But only then they realized that the cars did not have enough power to cross the Andes and they would crash. The project was frozen, and the trains were left. 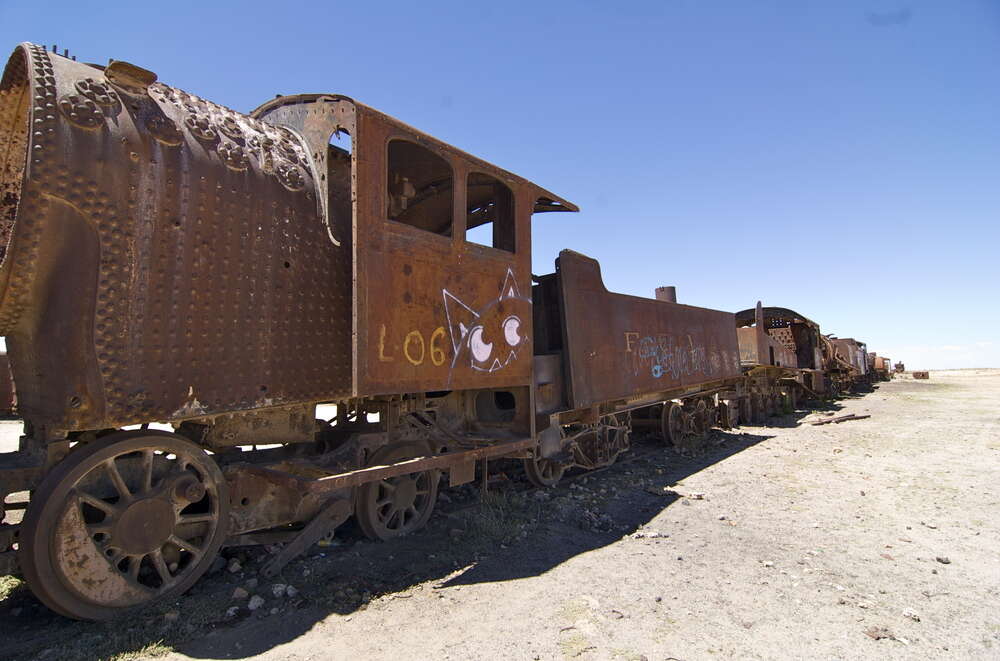 Admission is free. Everyone can freely move around the "cemetery". Climb up, inside, under the trains. Take any number of photos and selfies.

The village of Kolchani is the very place where salt is mined. About 80 families live here. The settlement consists of tiny houses and a strip of shops targeting tourists.

Everyone likes to watch the salt mining process. Right in residential courtyards, tourists can see piles of unprocessed salt. Then it is processed from impurities, packed in bags. Locals sell a bag of salt for only € 5. 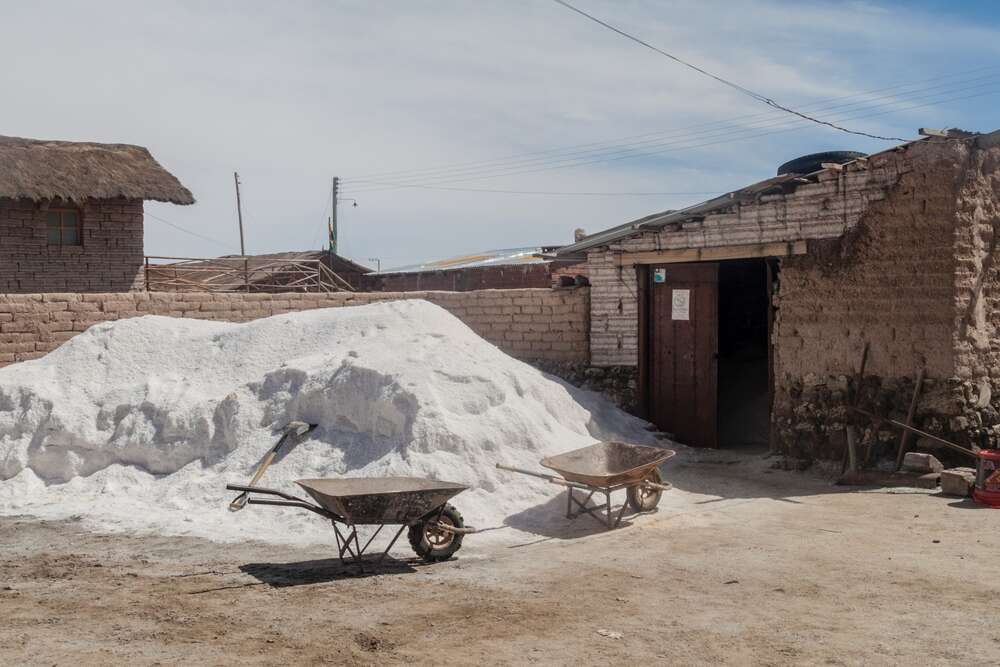 There are many islets throughout the plateau. One of the most unusual is called Cactus Island. In fact, it is a mountain covered with cacti and large boulders. Its height is 3600 m. It consists mainly of corals and shells. Visitors seek out excellent locations with views of the plain. The hiking route passes through a coral cave. Don't forget to bring your sunscreen. Entrance fee is € 4.

The plateau is rich in volcanoes and glaciers. You can climb the volcanoes: Licancabur (5960 m high), Uturuncu (6020 m high) or Ollagüe (5865 m high). Nevado Candelaria glacier (5995 m high) is of particular interest.

Uyuni Salt Flat has two seasons. The high season is rainy. It lasts from December to April and delights travelers with a breathtaking mirror effect.

From May to November is dry season. But even during this period, the white desert of the salt flats is very beautiful and gives endless opportunities for incredible photos. The soil gets harder and tourists can walk in places that are inaccessible during the rainy season.

Travelers claim that the summer months are the best time to visit. During the day, the temperature becomes +15-20C, and it can drop to -10C at night.

The salt flats are located on the border of Chile, Bolivia and Argentina. Therefore, the duration and logistics of the trip depends on where you are leaving from. For example, the easiest way to get there from Bolivia is from the capital La Paz by plane - to the small town of Uyuni. The journey takes 60 minutes, the round-trip ticket price is € 106. Or you can choose an overnight bus ride. 12 hours on the way, one way ticket price is € 32. Renting a taxi to the salt flats will cost € 28.5 one way. 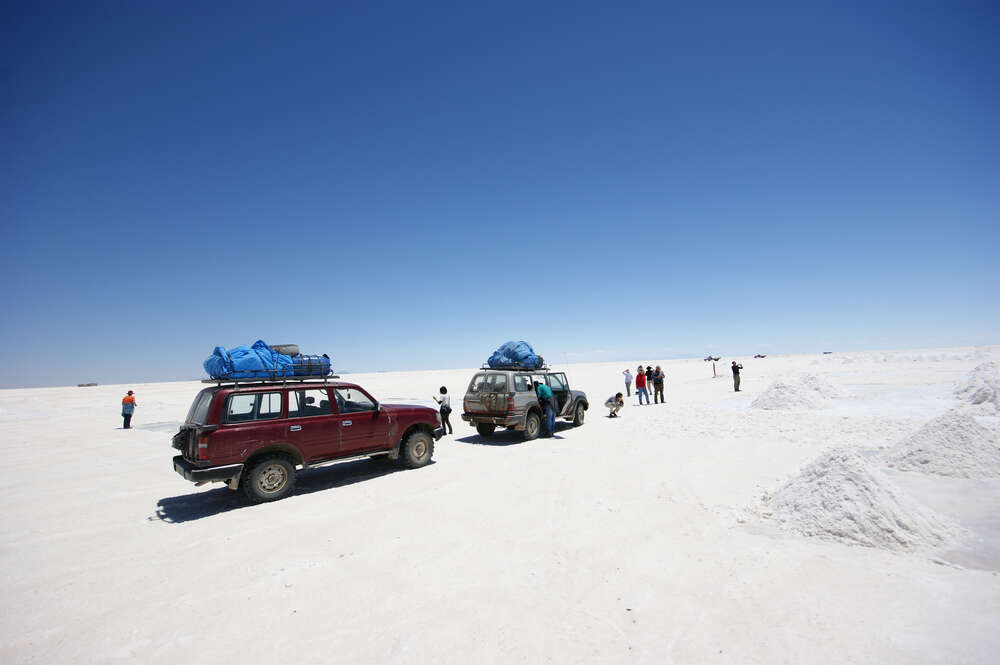 Where to stay near the Uyuni Salt Flat

There are inexpensive hostels in the town of Uyuni. But tourists prefer to stay in salt hotels. There are 3 hotels to choose from, where walls, ceiling and sculptures are made of salt blocks. Because of the rain, these hotels need to be rebuilt every 10-15 years.

The hotel rooms are comfortable and modern. In addition to comfortable beds and a bathroom, a solarium is provided. It gets cold at night in this hotel. There are plenty of blankets available, but you won't need them, as your bed will have built-in heaters.

The hotels have spas and wellness centers. Balconies offer stunning views of sunrise and sunset. And star enthusiasts can admire the galaxies at night.

The initial cost of living for two will be € 66 per day. The administration asks guests not to lick everything they see in the room. 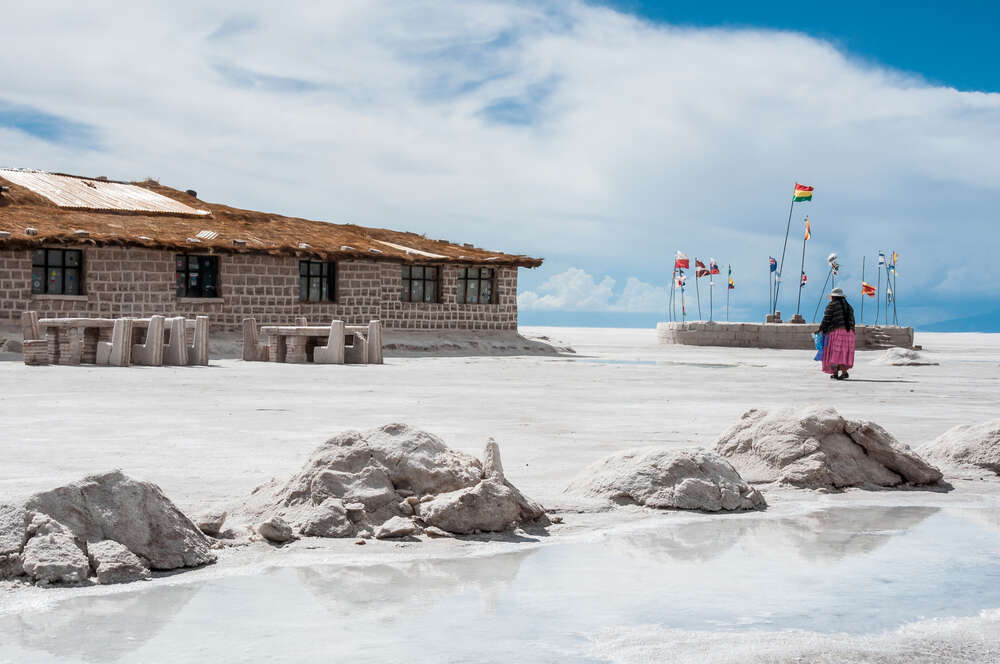 Those tourists who are used to sleeping in tents often spend their nights on Cactus Island. This is not to say that this option is welcomed by the administration, but no one forbids travelers to spend the night under the stars of the salt flats this way.

Travellizy Team has found another great place for you to visit. We hope it amazed and intrigued you. We wish everyone to get lost in the cosmic expanses of the Uyuni Salt Flat.