Red Bell Pepper & Wine: Things To Do In Bulgaria

What do you associate Bulgaria with? Probably with golden beach sand, warm sea and numerous resort towns. And also, perhaps, with sweet bell pepper and aromatic white wine. However, the country on the Black Sea coast can offer the curious traveler not only beach holidays and culinary hedonism, but also many other interesting things - from ancient temples to natural beauty.

Count all the temples in Sofia

The Bulgarian capital cannot be called the world's most interesting city, but it is worth staying here for a day or two. At least in order to see a couple of majestic temples, walk in shady parks and understand how the country lives.

The largest and most famous temple of Sofia is the St. Alexander Nevsky Cathedral. It rises in the very heart of the city and defies the imagination with its complex architecture, brightly painted domes and huge 5-meter crosses. There is also something to see inside the cathedral. Frescoes of the finest work, ancient icons, all this inspires awe even for the most notorious atheists. 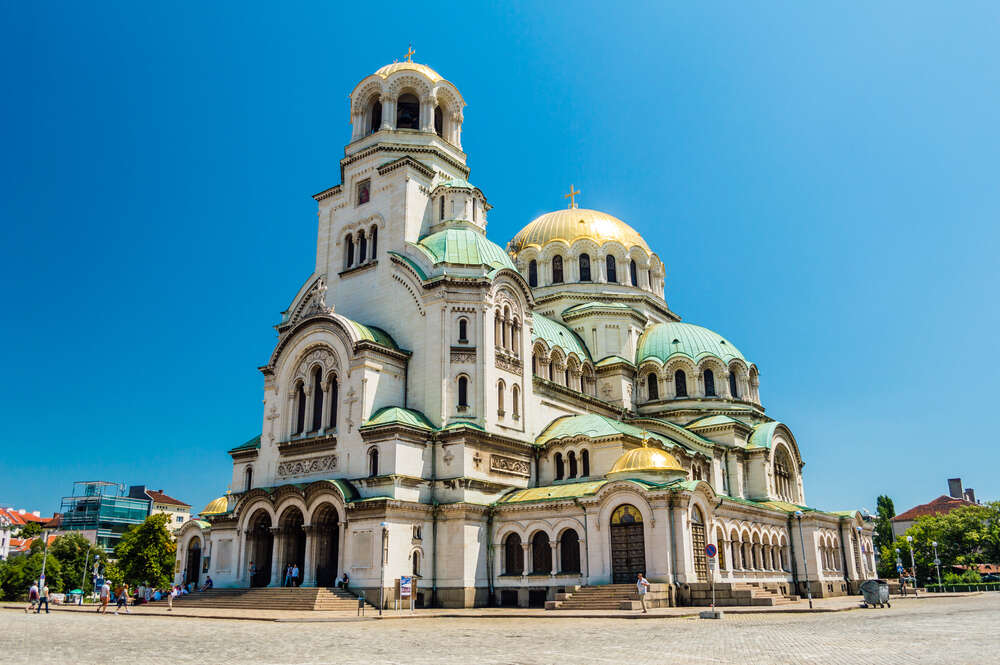 The cathedral, named after Hagia Sophia, the legendary patroness of the city, is not as pretentious as the St. Alexander Nevsky Cathedral. Outside, it looks more like an ancient fortress than a church. And the most ancient temple in the capital of Bulgaria is the Rotunda of St. George. During its long history, it has managed to be a baptistery, a mosque, and an Orthodox church.

The last of the notable churches of Sofia is located in the suburbs. This is the Orthodox Rila Monastery, which attracts tourists with its unusual paintings on the outer walls and numerous arches.

See the underwater city of Nesebar

Nesebar, which is located on a peninsula near the resort city of Bourgas, is called the architectural pearl of Bulgaria. It is protected by UNESCO not without reason and attracts visitors from all over Europe. 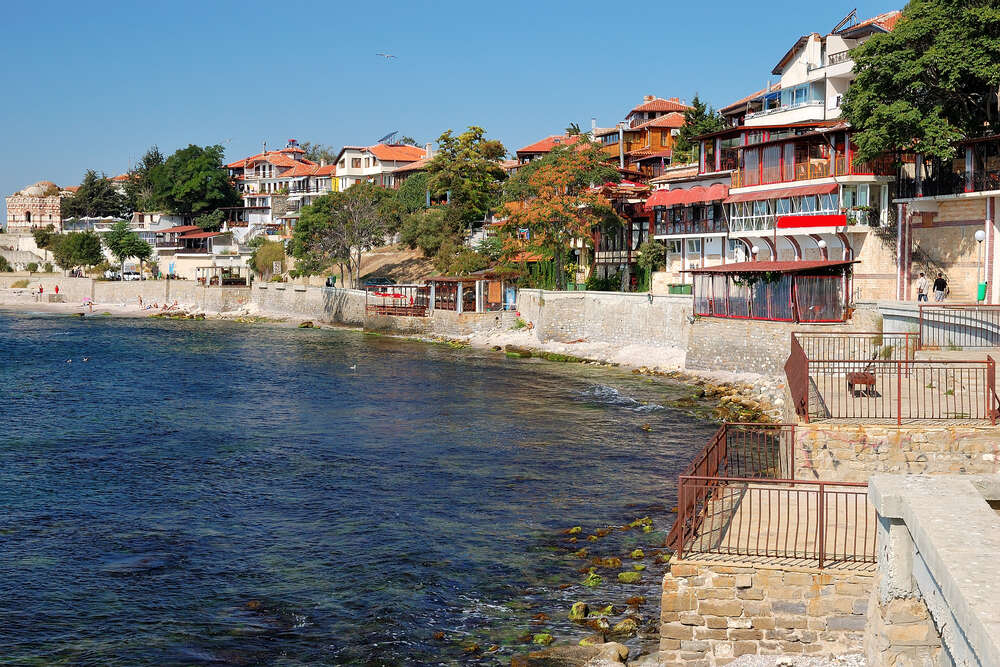 There are two parts in the museum city of Nesebar - onshore and underwater. In the above-ground, there are about fifty temples and churches, the red tiles of ancient stone houses gleam in the sun. The part of the city that went under water several centuries ago can be viewed from the piers or during a boat trip around the peninsula.

A small Bulgarian town is considered to be one of the cultural centers of the country and pleases both those who like natural and architectural attractions. For the first ones, Veliko Tarnovo has stunning green hills, rivulets with clear water and super-photogenic views. For the second category, it offers a pack of old churches and one fortress-hotel. 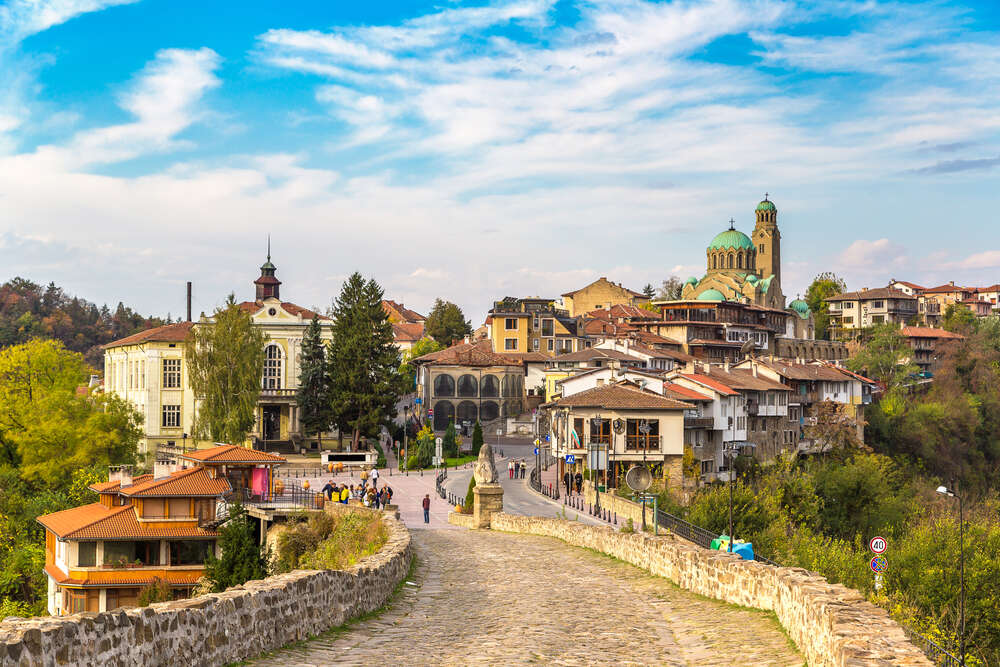 The most famous churches in Veliko Tarnovo are the Patriarchal Cathedral of the Holy Ascension of God and the Church of Saints Peter and Paul. They are close to each other, so you can visit both in just an hour. The Tsarevets Fortress stands on a hill outside the town, and you can reach it on foot or by taxi. The ancient stone building has now been turned into a boutique hotel, and light shows are regularly held on the walls, that used to watch the Ottoman conquests.

Soak up the sun in Varna

Varna is the most famous resort city in Bulgaria, which is loved not only by mere mortals, but also by prominent politicians, movie stars and other celebrities. This is due not only to the abundance of comfortable beaches, but also to a number of interesting places in the area.

In Varna itself, there is a dolphinarium, several water parks, and the Sea Garden, a botanical park with a rich collection of plants, stretches along the coast. 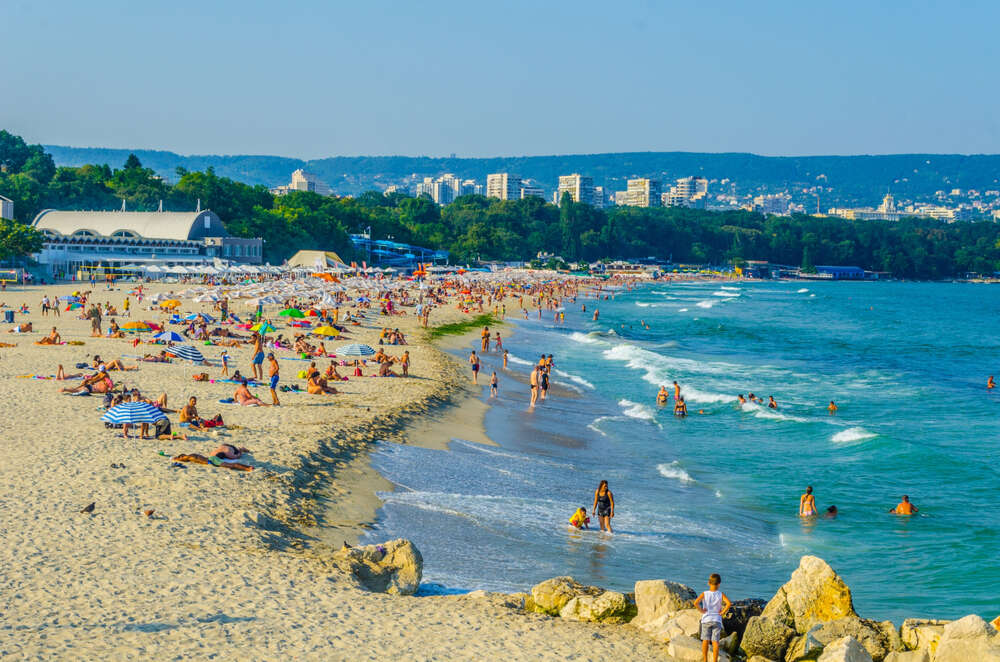 Not far from Varna and another famous resort called Golden Sands, the most interesting monastery in Bulgaria is hidden. Why is it hidden? Because the Aladzha Monastery was carved inside the rock, and it is extremely hard to notice it from the outside. The cave complex is open to visitors only in summer, and wandering along its corridors, you can easily imagine yourself being a medieval monk hiding from the Ottoman invasion.

Find traces of the Romans in Plovdiv

The city of Plovdiv is like a nesting doll. The Old Town is located inside the modern New Town. The Old Town is of great interest among tourists, although it is more convenient to live and eat in the New Town.

The Old Town of Plovdiv is a real open-air museum. You will find here a well-preserved Roman amphitheater, an ancient basilica, and many ruins dating back thousands of years. It is interesting that concerts and cultural events are still held in the Plovdiv amphitheater. 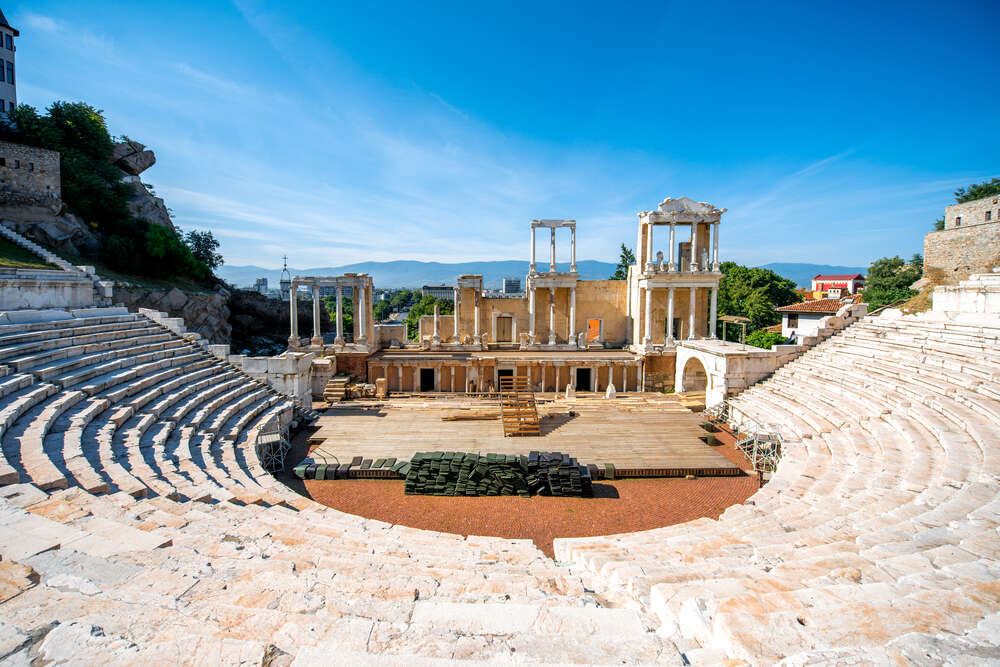 Muslim conquerors also left their traces in Plovdiv. One of the most noticeable traces is the Dzhumaya Mosque, built in the 14th century on the site of the cathedral destroyed by the Ottomans. The mosque operates to this day, and anyone can enter it. Of course, if following the dress code.

Treat yourself to Bulgarian wine in Pleven

In fact, you can taste Bulgarian grape wine anywhere in the country. The Wine Museum of Pleven is unique for two reasons. 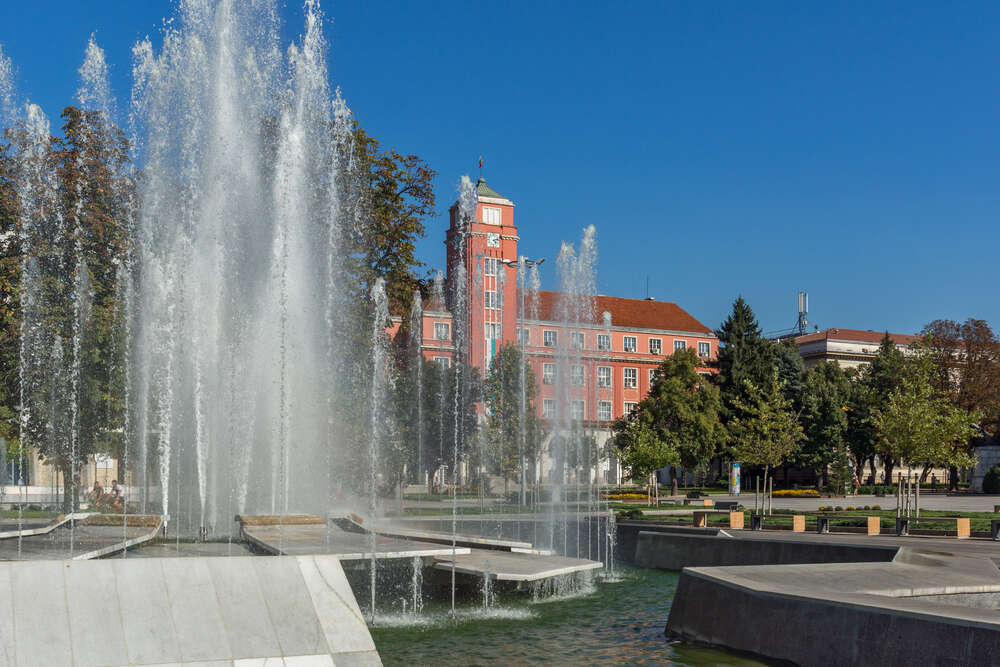 Firstly, the museum is designed in such a way that it seems as if it has been carved into a rock. This is not just a factory or a cellar, it is a real underground gallery with a mystical atmosphere inside. Secondly, the museum historical hall contains about 12,000 exhibits, that is, wine bottles. Of course, you will not be allowed to taste the rarest varieties, but you can enjoy various types of young wine in the tasting rooms.

Walk through the ethno-village in Melnik

The town of Melnik is a quiet haven for fans of unhurried rural life. It seems that time stopped here several centuries ago. Traditional houses, narrow streets where you can only go on foot, family cafes where you are welcomed like a close relative. All this makes Melnik a must-see place when traveling in Bulgaria.

The medieval Rozhen Monastery is located 5 kilometers from Melnik in the Pirin Mountains. Once upon a time, there was a school of calligraphy, and the complex itself was considered to be the spiritual center of the country. Now, anyone can see the complex. 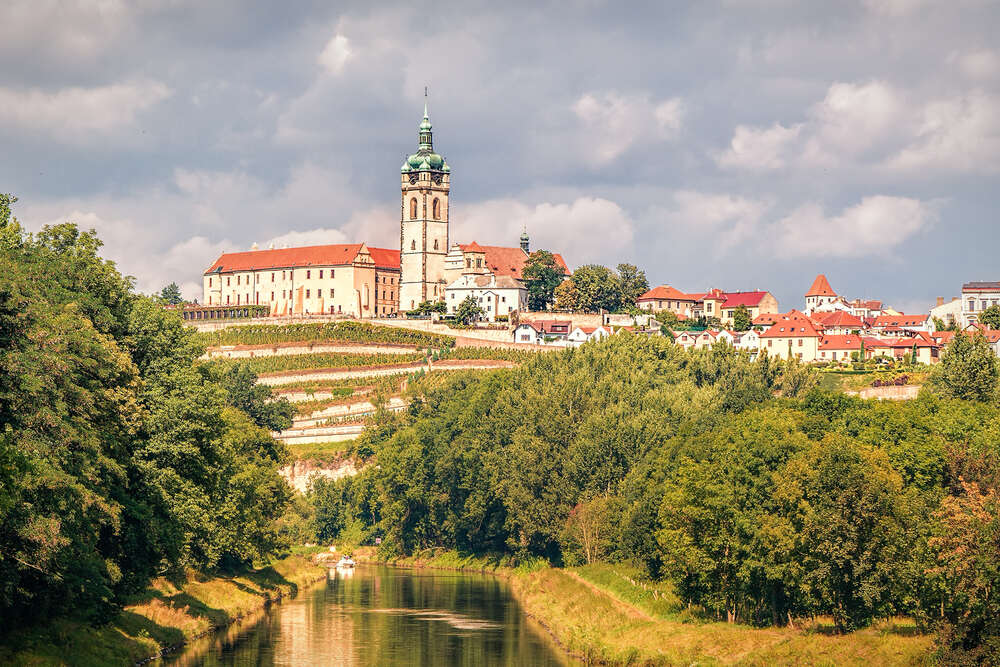 By the way, another curious Bulgarian ethno-village is Shiroka Lyka. Next to it, there is one of the most popular ski resorts in Bulgaria - Pamporovo.

Take a ride around natural attractions all over Bulgaria

The best way to explore Bulgaria is with a car - a rented one or your own. Then you can easily visit not only popular tourist cities, but also look into those parts of the country that crowds of foreigners do not reach.

So, driving along the road from Kazanlak to Gabrovo, you can admire the beauty of the Shipka Pass. If you are traveling around the country in May or June, make sure you check out the Rose Valley at the foot of the Balkan Mountains. On the northern slopes of these mountains, there is the Belogradchik Fortress, which offers simply dizzying views of the rocky landscapes.

Nature enthusiasts should allocate a few days to the Kamchia Biosphere Reserve, which is 25 kilometers from Varna. Virgin forests have been preserved here, and you can also meet several hundred species of birds. Climb to the Seven Rila Lakes to admire the scattering of glacial reservoirs against the backdrop of mountains. Try to find the grave of Orpheus at the archaeological complex of Perperikon. 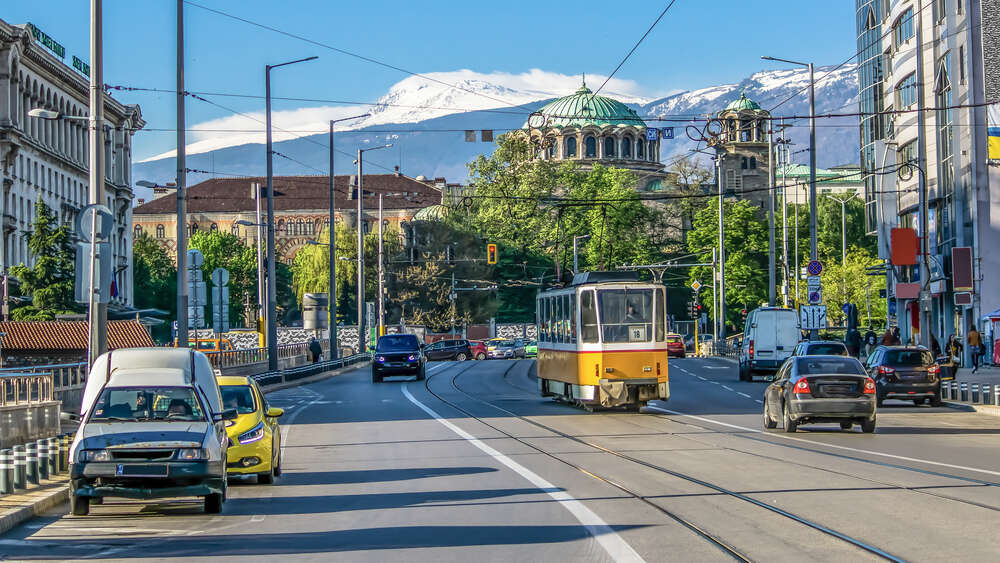 Bulgaria is diverse and interesting. While on vacation, you can easily spend all the time at sea, or you can take a bus or a car and go on an exciting adventure.