The menu in an ordinary Indian cafe can cause shock and bewilderment for an unprepared foreigner. Even the seemingly banal tea here is not at all what you imagine, let alone exotic names such as aloo gobi, cheese naan or biryani. In order not to get into a mess and get pleasure from one of the brightest cuisines of the world, Travellizy Team advises you to understand all the nuances thoroughly.

The main Indian dishes are curry, once again curry and rice.

The first rule of Indian cuisine: curry is not seasoning, curry is food. A dish with the word “curry” in its name will definitely have gruel from various aromatic spices - turmeric, ginger, cloves, several types of peppers, and much more. The second word in the name of the dish means what exactly is served curry. Let's just say, chicken curry is fragrant gravy with chicken, and vegetarian version is with vegetables. Note that curry is necessarily spicy. 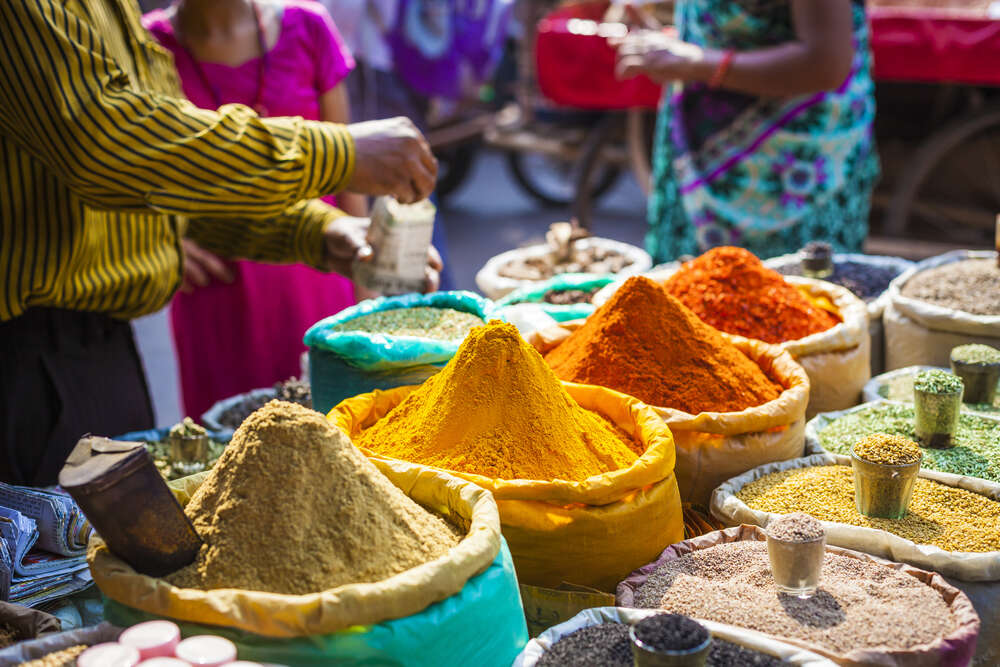 Paneer is an exotic word that is very common on the Indian menu, but in fact, it is the most common goat cheese. It is often served with curry or with sauces. Paneer tastes like tofu or Circassian cheese, and when fried or baked and along with spices - it’s so delicious. A very popular dish in India is palak paneer, cheese in a thick spicy spinach puree. 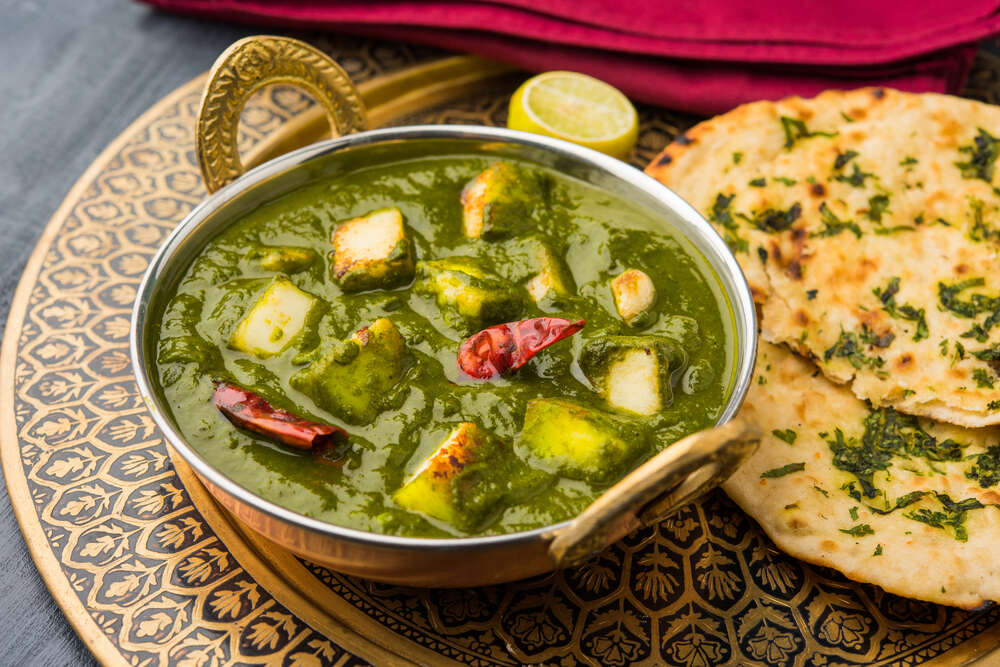 The main Indian rice dish is biryani. Each state has its own cooking method, and you can choose the type of rice for the base yourself. The traditional stuffing of biryani is chicken wings fried to a crisp, mutton or lamb. Pure rice is served with many dishes, seasoned with lemon, zira or pepper. 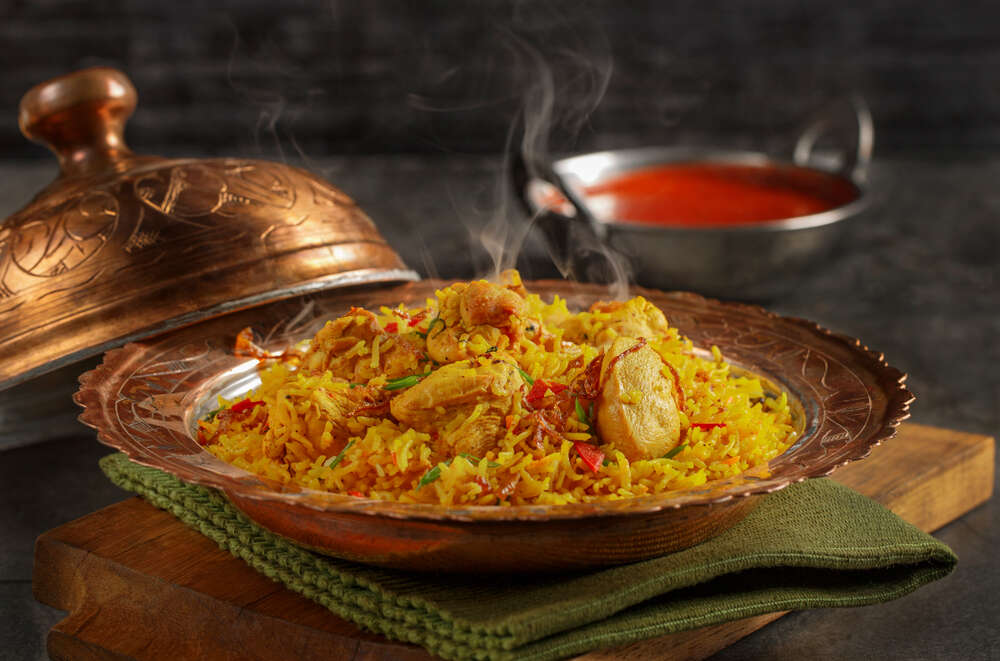 When you are in India, make sure to try dhal (aka dal or daal), which is bean soup puree. Lentils, chickpeas, peas, urds may be the basis for this dish, coconut milk, garlic, tomatoes and lemon are added to it. Dhal has to be eaten with rice, dipping a spoon with a side dish into the soup, or with a tortilla. The soup consisting of a broth, which is familiar to the European, is not cooked in India. 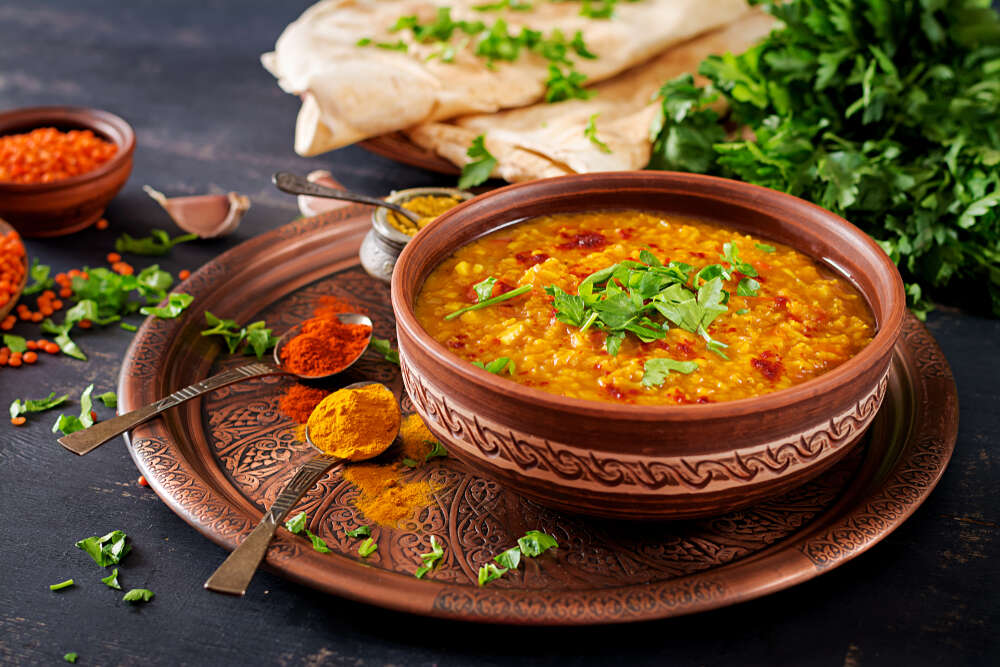 Aloo gobi is a dish with a strange composition, but divine in taste. A mixture of fried cauliflower and stewed potatoes with curry can be eaten with rice, or you can take a constant cake. Any dish with "aloo" in its name is a potato dish. 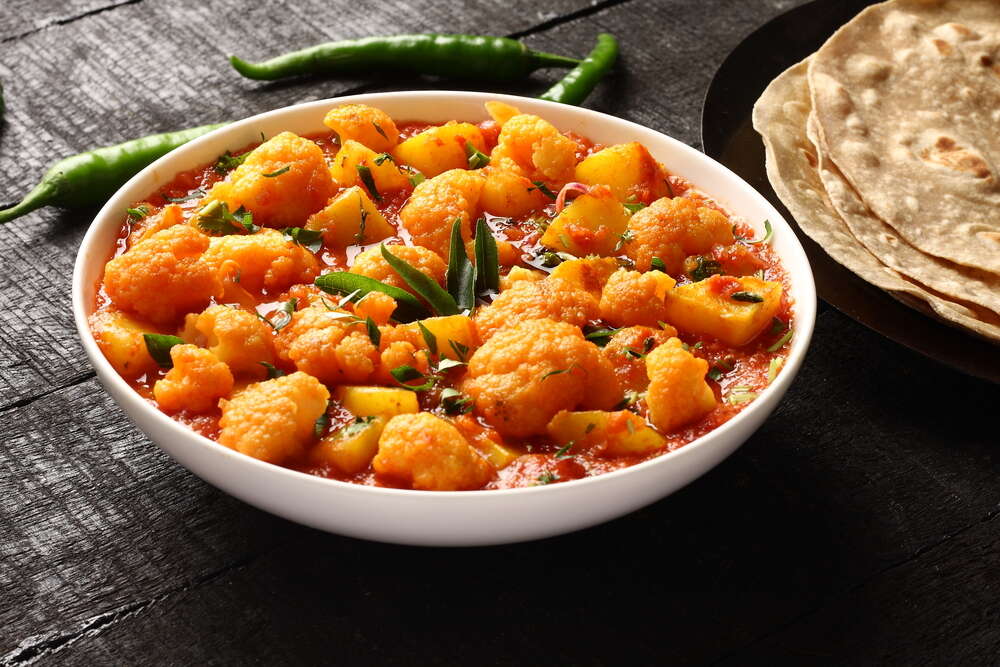 Would you like to taste a few traditional Indian snacks at once? Then your choice is thali or, as it is called in some states, meal. Thali consists of a generous portion of rice and many small plates, which can contain curry, paneer, dhal, stewed eggplant, and curd. Thali is vegetarian and non-vegetarian, speaking about the latter, meat or fish will be on one of the plates. It is served with tortillas. 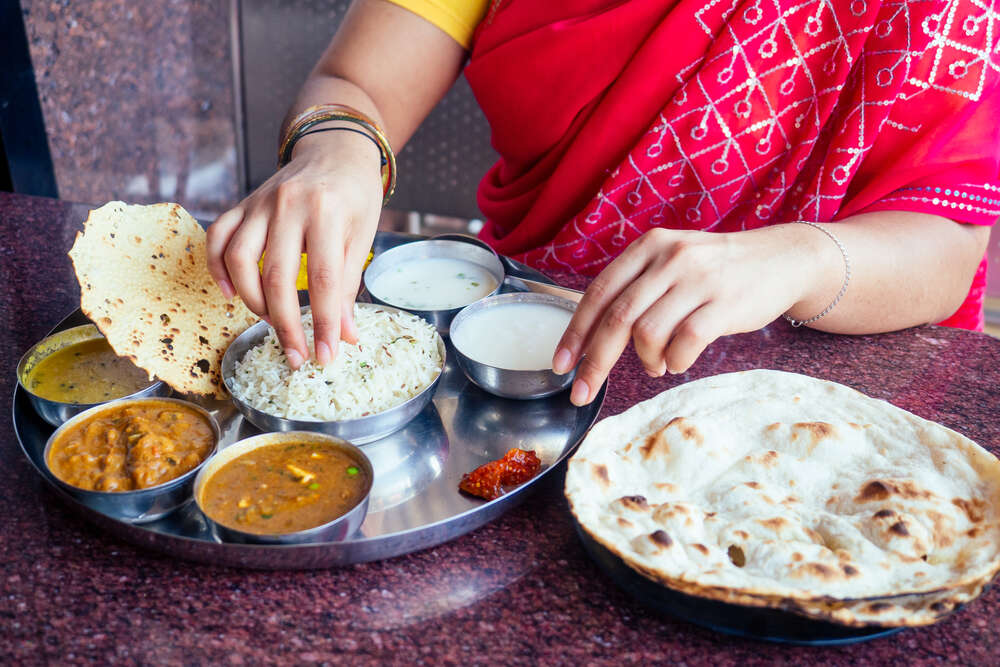 In the north-east of India, the influence of the Middle East is clearly traced in culinary traditions. They bake here chicken in a tandoor oven, cook kebab and pilaf, and eat it all with hot and aromatic pita bread. 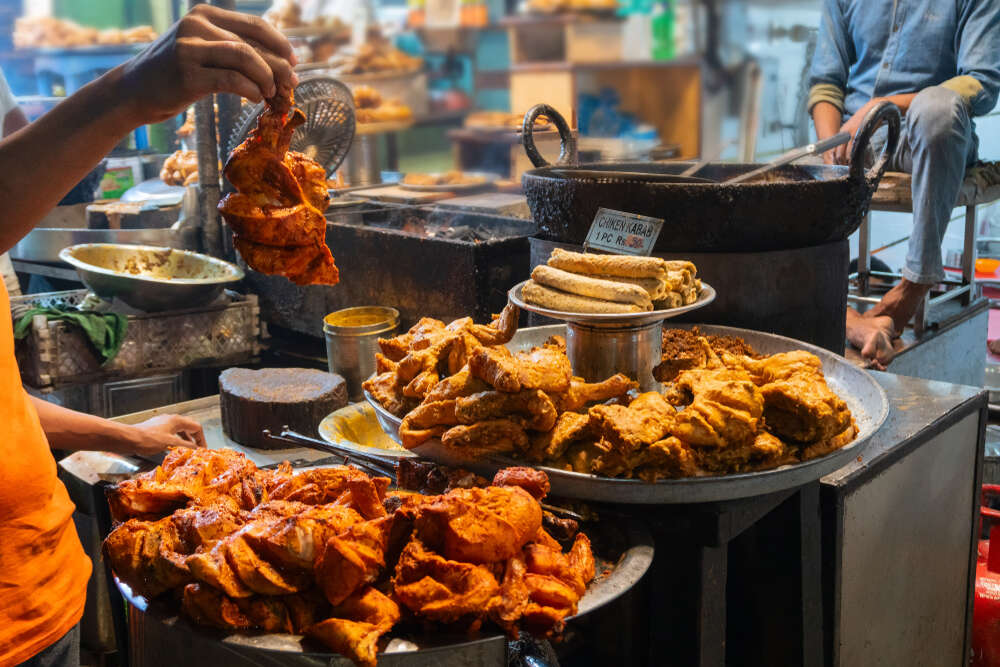 In Goa, Kerala and other states on the ocean, fish and seafood are very popular. It is interesting, that completely different fish dishes can be called by the same word - ilish. In the northern states, you can try the traditional Nepalese momo dumplings, and in the south, they put so many spices in each dish, that even its smell may cause heartburn. 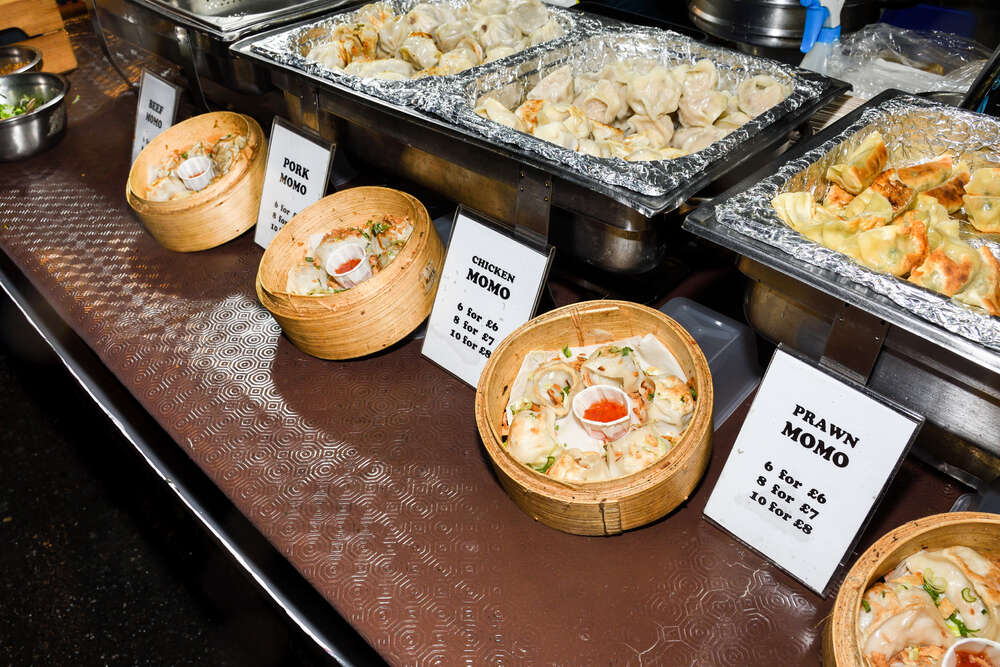 50 shades of grain in India

Dishes in India are not just eaten with tortillas; tortillas often serve as spoons and forks. You do not have to do this at all, you can use the usual cutlery, but with the right tortilla, any dish becomes tastier.

Naan is a fresh wheat tortilla that is often cooked with vegetables, cheese, potatoes or meat. Hot cheese naan with garlic and herbs perfectly shades the taste of curry and goes with soup. 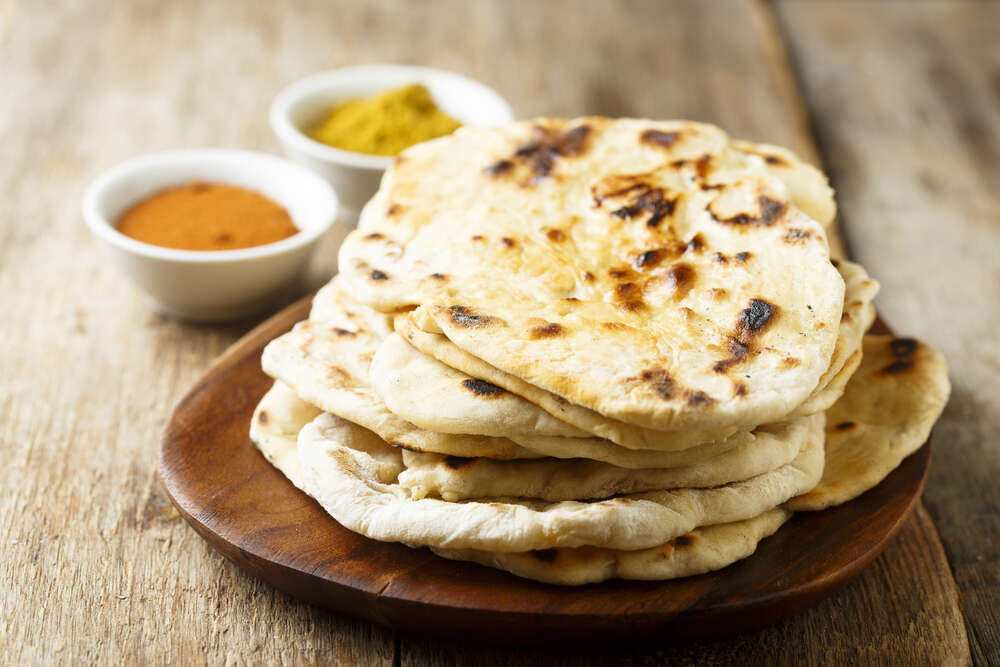 Chapati, or roti is a thin bread of wheat dough, similar to pita bread. If you decide to try the traditional Indian way of eating, then chapati slices are perfect for dipping sauces or scooping rice. 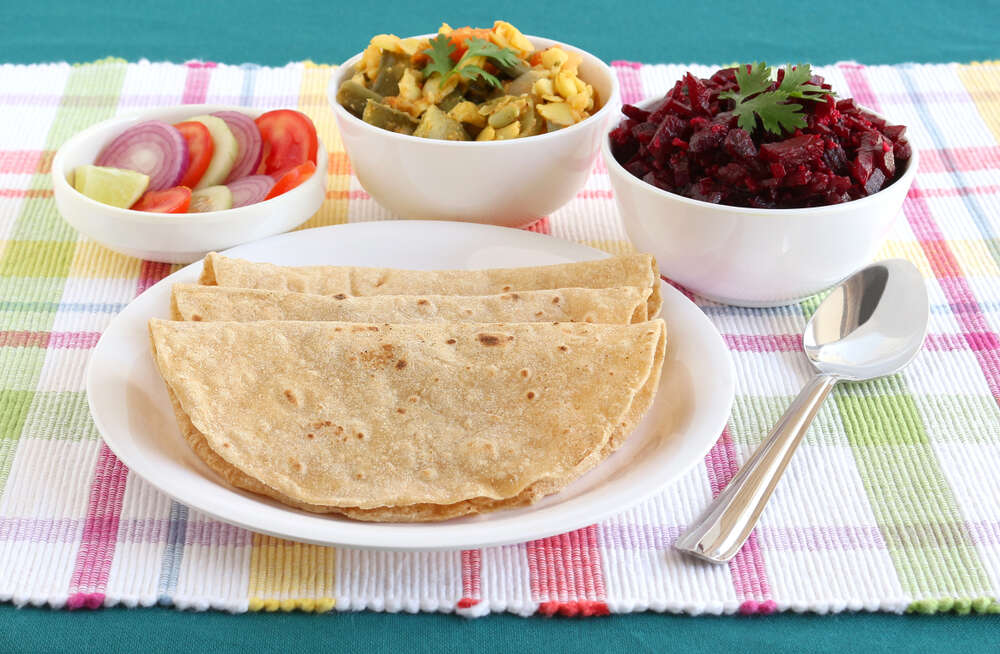 Papadum is a crispy lentil or rice cake with spices. Papadum is dry, so it is best suited to soups.

Samosa is an authentic folk food in India, and it is more like a patty than a tortilla. Samosa with potatoes, vegetables or meat is sold on the streets, in train cars, on buses, on beaches, in general, everywhere. Keep in mind that patties are often fried in a huge amount of ghee, so they are, to put it mildly, not dietary. 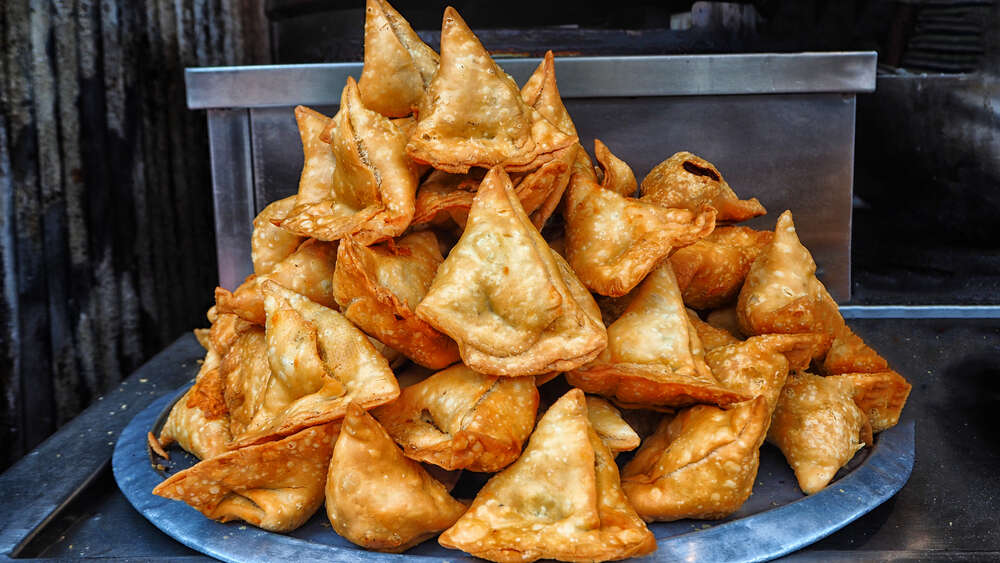 Dosa is a pancake with filling. The sizes of the dosa are often very immodest, so it can be a main course itself, and not a complement to it. One of the most popular options is masala dosa stuffed with potatoes and cheese. The best "partner" of the dosas is chutney sauce or soup. 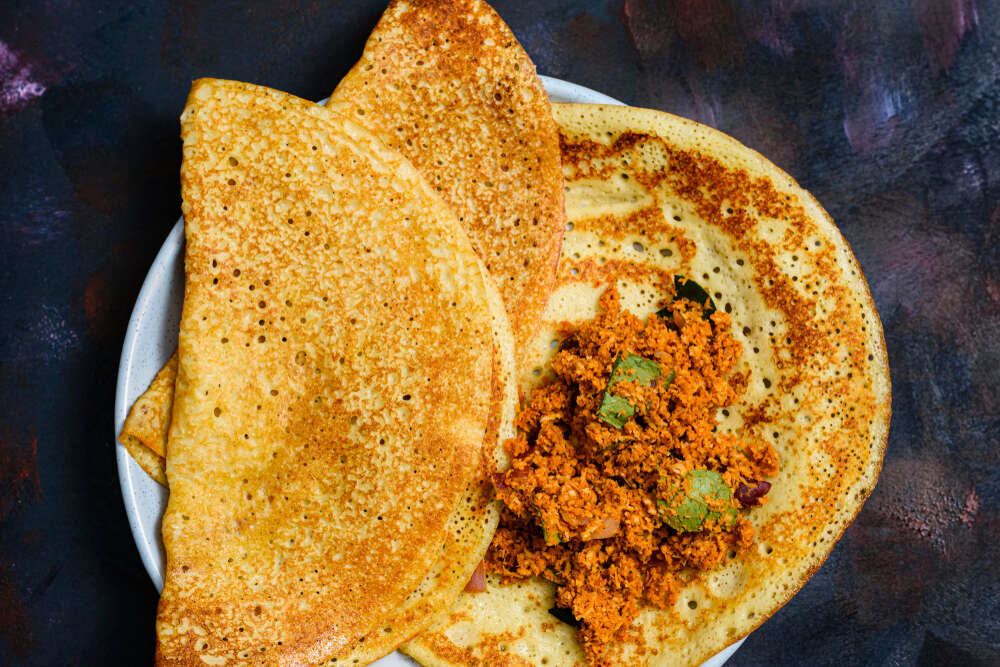 The most delicious Indian snack is pakora. Deep-fried vegetables, cheese or meat will suit any dish and serve as a perfect beer snack.

If the dish seems dry or fresh to you, then order it with chutney, a sauce based on coconut milk. 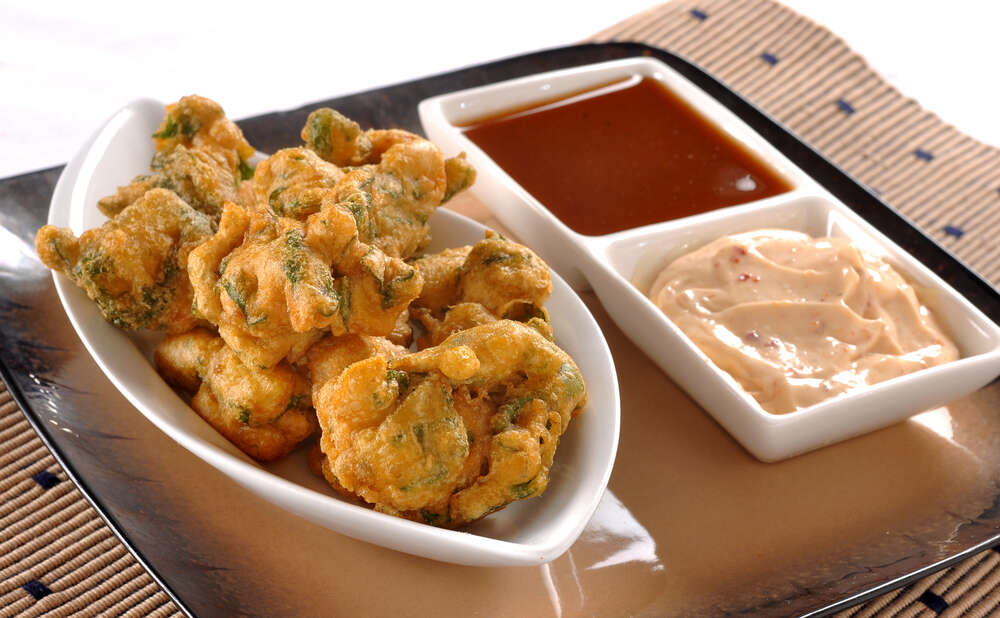 Indian sweets are always very sweet and almost always fried in ghee butter. It can be walnut-coconut balls ladoos, gulab jamun (semolina balls) or halwa. But do not confuse Indian halwa with Arabic one, here it is a pudding of semolina and butter, abundantly soaked in honey or sugar syrup. 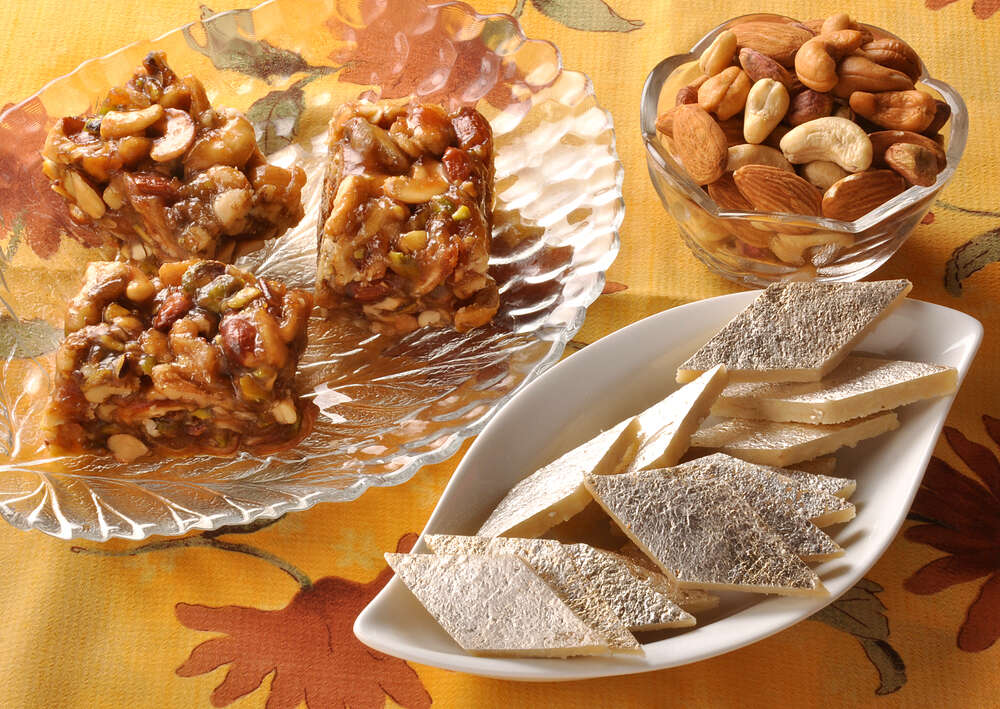 Jalebi, a popular sweet, is prepared in India right on the streets. The dough is poured into a boiling oil in a thin stream, resulting in sweet and crispy nests. And kulfi, condensed milk ice cream, will appeal to lovers of cold desserts. 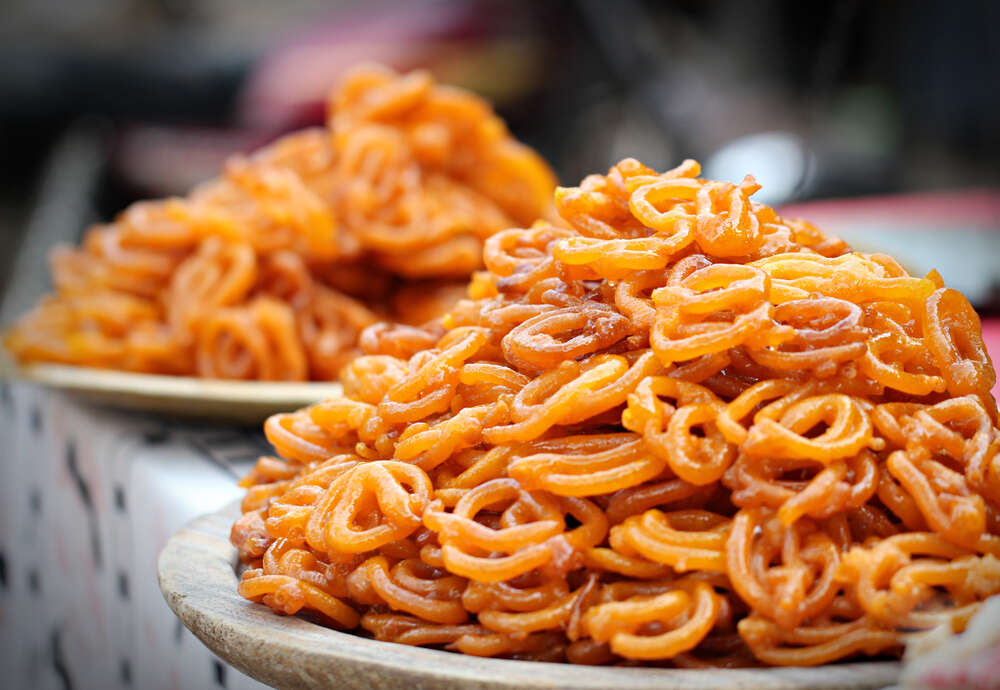 The most unusual Indian dessert called falooda and came to the country from Persia. These are thin strands of starch in milk with fruit juice and spices. It tastes as strange as it looks. 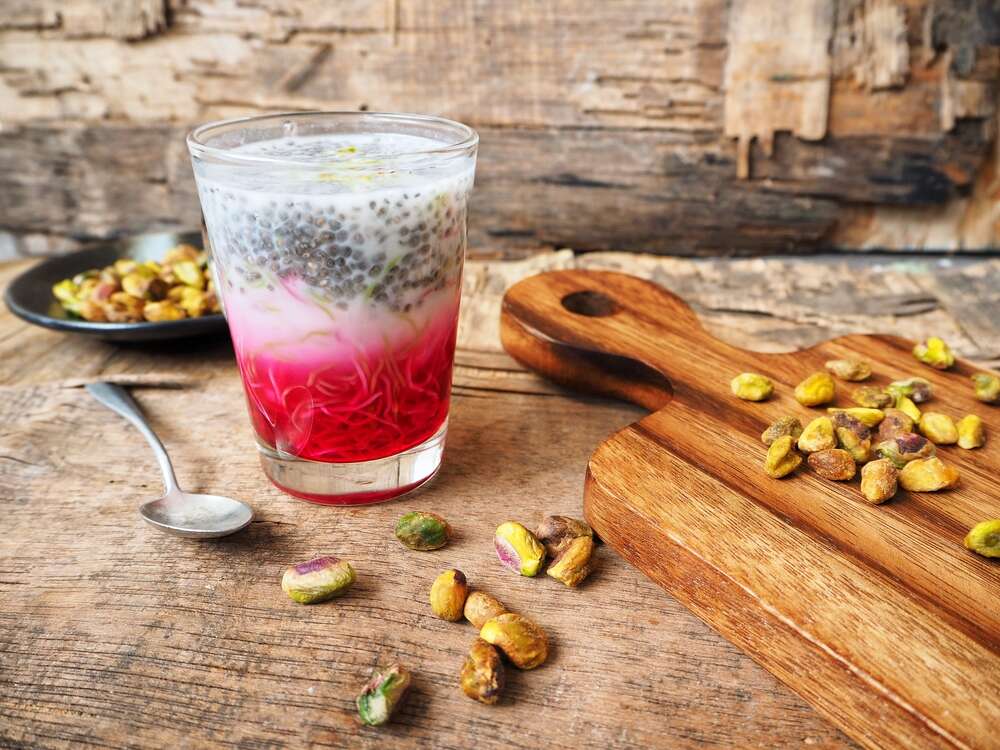 What is food in India washed down with?

To extinguish the fire raging in your mouth and stomach after a particularly sharp curry, you should take a cool lassi. This is a milk drink similar to drinking yogurt with the addition of fruit juice and pulp. Lassi may be not sweet, with spices and salt. Curd, another popular milk drink, is something between yogurt and sour milk. 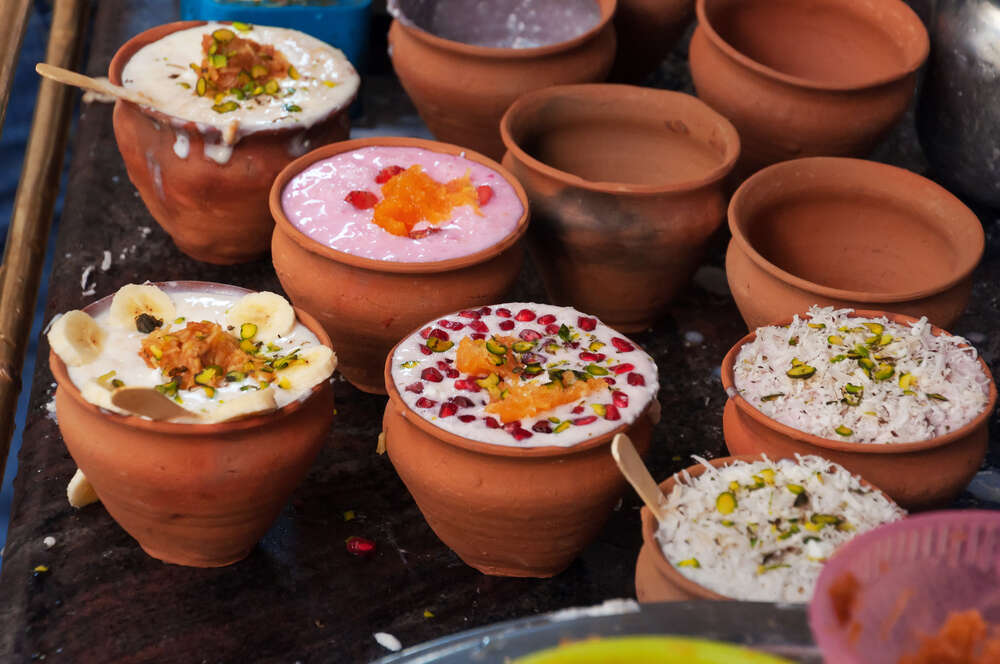 Would you like something hotter? Then you need masala tea, which is prepared on the basis of strong black tea, but with the addition of milk and spices. Interestingly, such a drink does not have an exact recipe; the combination of spices depends solely on the cook’s imagination. 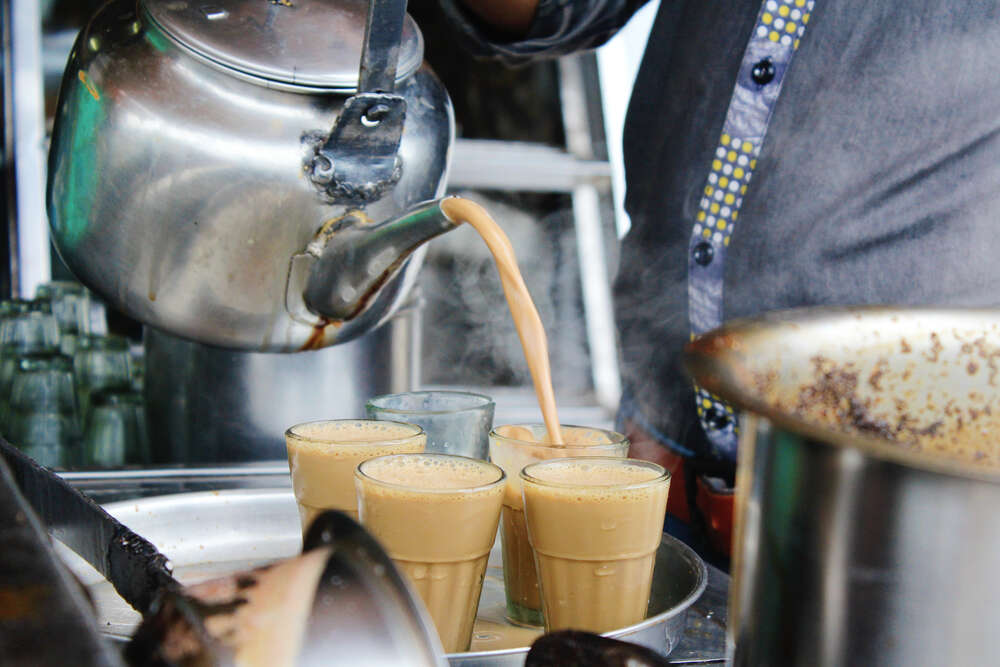 Another hot but less exotic Indian drink is ginger lemon honey. It not only warms, but also helps a lot from colds, tones and relieves sore throats. 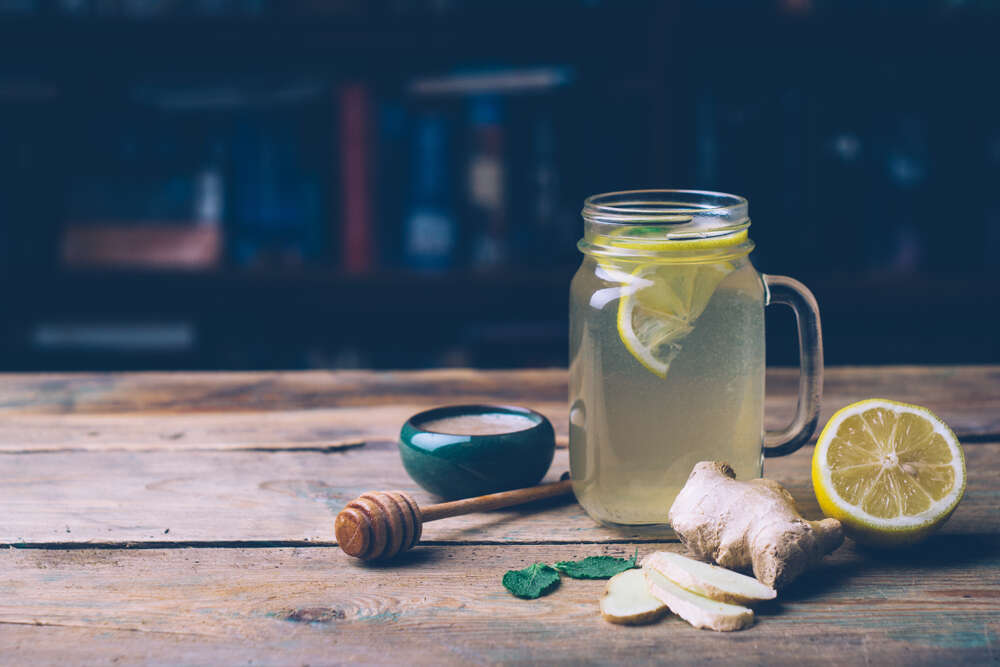 Tea and coffee in the European sense are difficult to imagine in India. Don't worry, in the tourist cafe, you will be served both drinks (although tea will not be of the best quality, and coffee will most likely be soluble), but in the local café, they will look at you with surprise. By the way, tea in India is always with milk, even if you ask without it.

How to eat in India

There are legends and jokes about the severity of Indian dishes, but in fact, the country has long realized that strange white people love plain food. In almost every establishment, you will be asked how spicy your dish should be. If no spicy - the food will be moderately spicy, if medium spicy - you should take lassi or a liter of water right away, if spicy - get ready for the volcanic eruption in your stomach. 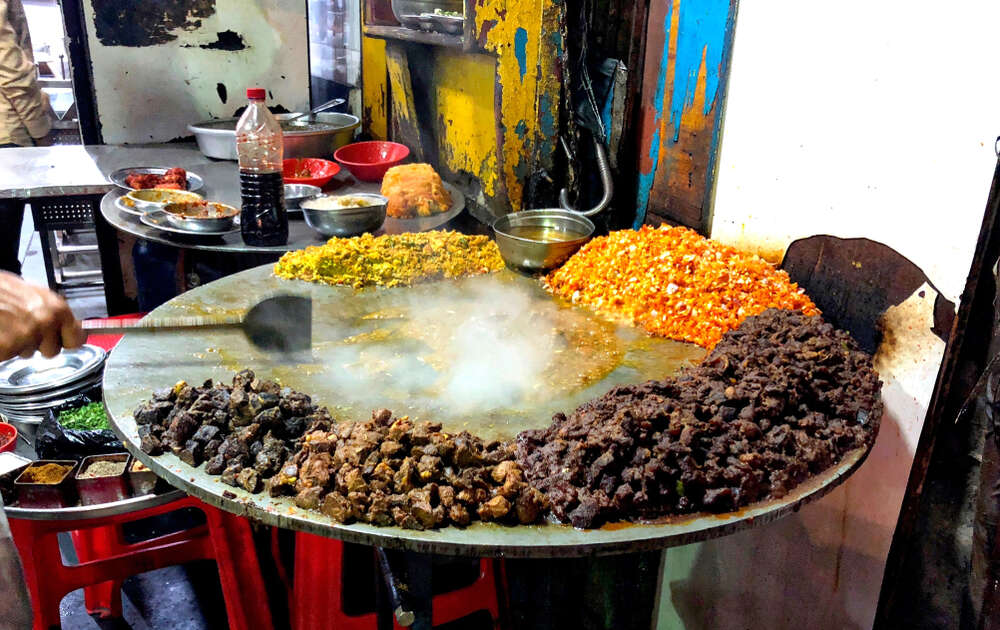 Food poisoning and indigestion is also an Indian legend, but avoiding this is very simple. Eat in decently looking cafes, not from street stalls, and then the food will be digested safely. By the way, Europeans often have stomach problems after Indian food, not because of the poor quality of the products, but because of the abundance of oil and spices. 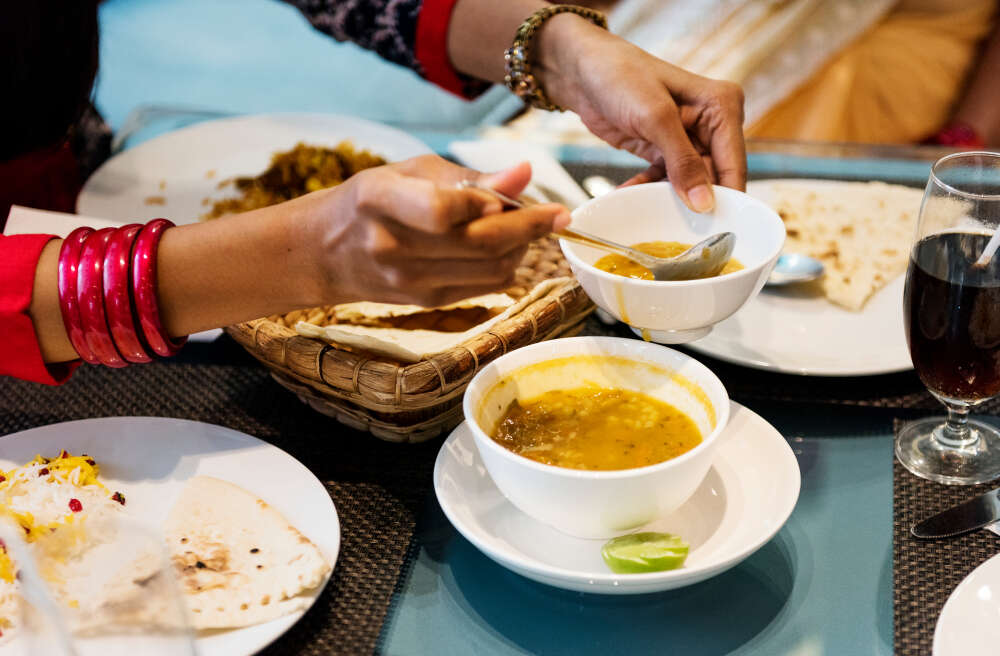 The portions in India are generous, so do not rush to order immediately rice and curry, and even delicious fish. You can safely take some dishes, for example, biryani or thali for two, and ask to wrap the rest with you, that's not that big a deal. 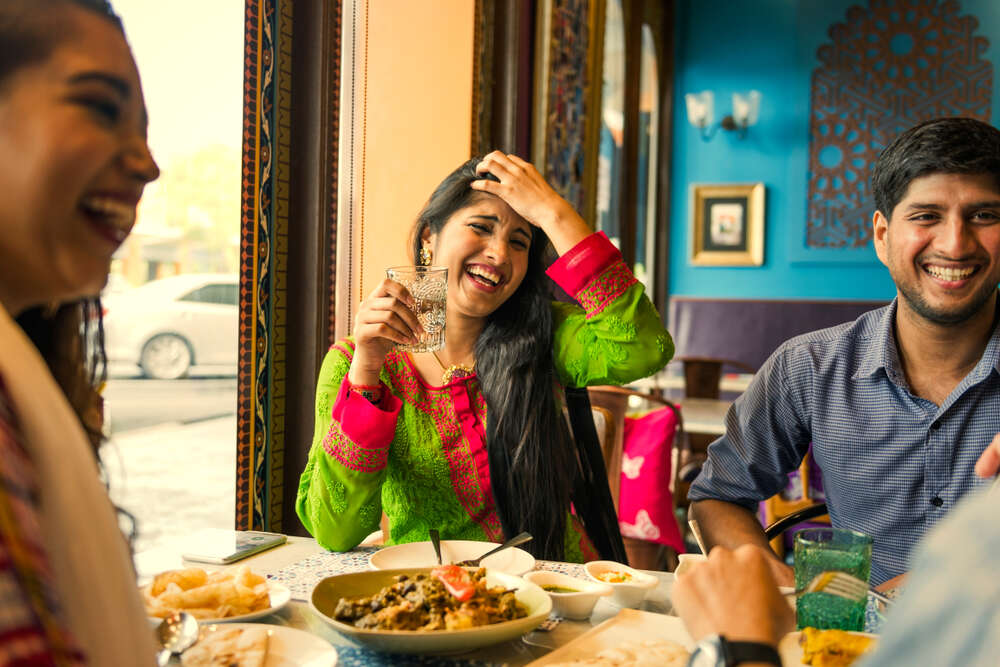 Most Indians are vegetarians, so for fans of plant foods in India, this country is a paradise on earth. The presence of meat in a dish is often indicated on the menu, there are many purely vegetarian cafes. 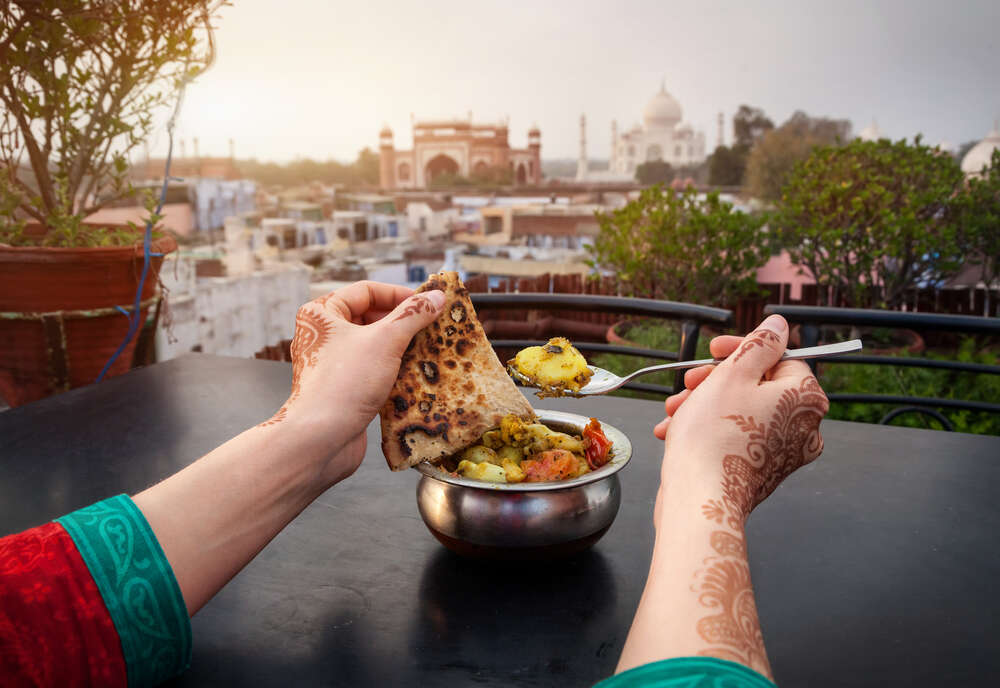 Indian cuisine perfectly reflects the type of country. Bright, unusual, spicy, you will definitely keep it in memory for a long time, and it will be an excellent occasion to visit Bhārat Mata again and again.