Shish kebab, pilaf, shawarma, kebab... If salivation from these names began to flow profusely, then it means that you will definitely like oriental cuisine. It is based on meat dishes, abundantly seasoned with spices, fried until crisp or baked, chopped finely or into large pieces. Today, we will just talk about such dishes. But before you start reading the text, have a good meal.

Shawarma can be found in cafes and on the streets from Turkey and the Balkans to India and Malaysia. The popular oriental dish is considered to be simple and satisfying, and it is prepared in an elementary way.

Whatever recipe you use to prepare shawarma, this always requires four main components: 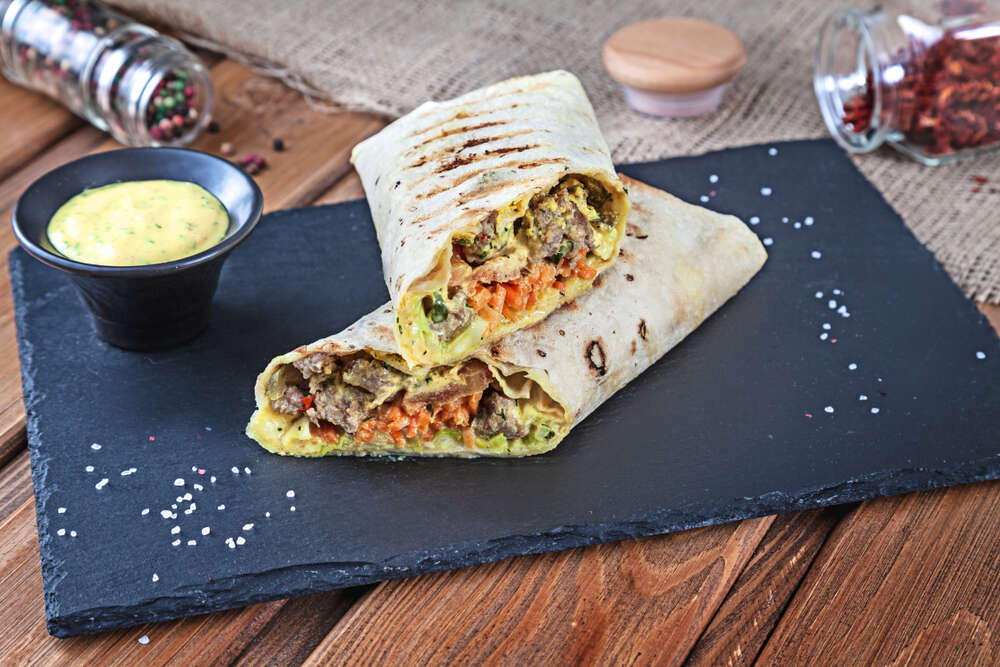 You can eat shawarma in a simple way - taking it and biting off pieces. Or you can cut it into pieces and use a fork. It will be delicious anyway.

The word "kebab" is translated from Persian as "fried meat", so this name hides many different dishes. Shish-kebab is skewered fried meat (shashlik as we know it), doner-kebab - fried meat in pita bread (shawarma), lyulya kebab - fried sausages made from minced meat. We're going to talk about İskender kebap, the hit of Turkish cuisine.

The canonical İskender kebap is made from beef. It is boiled in salted water, cut into thin strips and fried in oil with herbs. Then the sauce is prepared - tomatoes, green peppers and garlic are finely chopped and stewed.  Another sauce for Iskander kebap is unsweetened yogurt with salt and garlic. 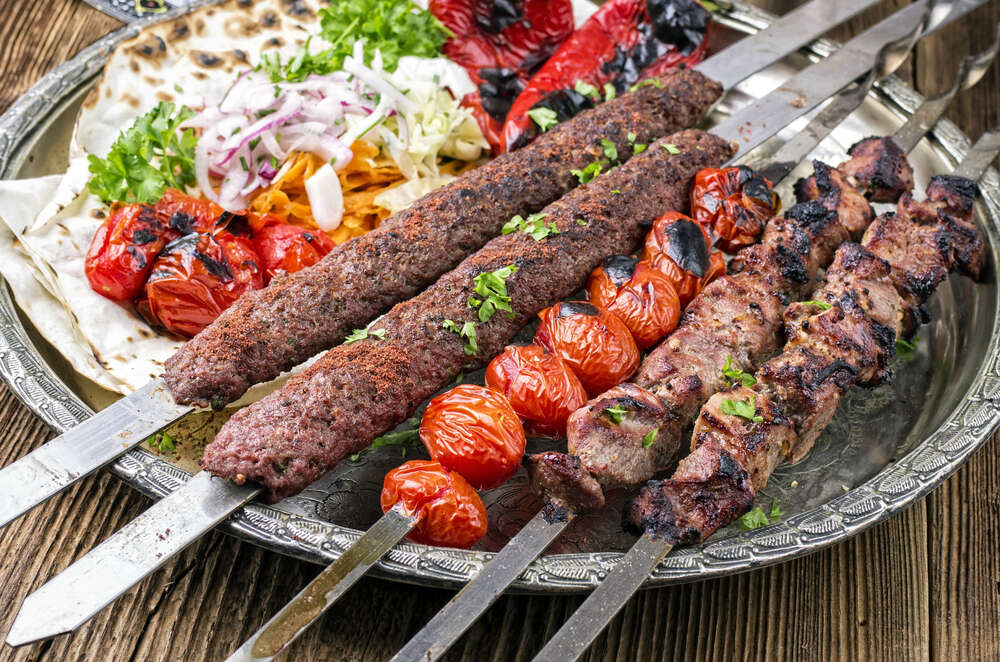 All components are separately laid out on a plate, lavash heated in the oven or microwave is added to them. Real Turkish Iskander kebap is ready.

Without this dish, it is impossible to imagine Central Asia, but it also spread to other countries. In India, pilaf is called biryani and spices and seasonings are generously added to it, in Uzbekistan, they prepare aromatic bayram-pilaf with quince, in Turkey, it is Iç pilaf with chicken liver. But one of the most interesting and delicious types is festive Iranian pilaf.

Preparing pilaf according to the Iranian recipe is quite simple. First, onions are fried in ghee until golden brown. Then coarsely chopped chicken and spices are added to it - pepper, saffron or turmeric, cumin. At the same time, you need to remove the zest from the orange, soak it in boiling water, cut it into thin strips and also fry it in a pan. The zest in Iranian pilaf replaces carrots.

After that you fry chopped dried apricots with raisins and pistachios with almonds. Rice is pre-washed and cooked over low heat for about 15 minutes.

But the main part of cooking any pilaf, including Iranian one, is frying all the ingredients in a cauldron. In Iran, the bottom of the cauldron is lined with pita bread, the fillings are laid out on top, mixed. The cauldron is covered with a towel or cloth to absorb excess moisture, then with a lid and left over low heat for 10-15 minutes. 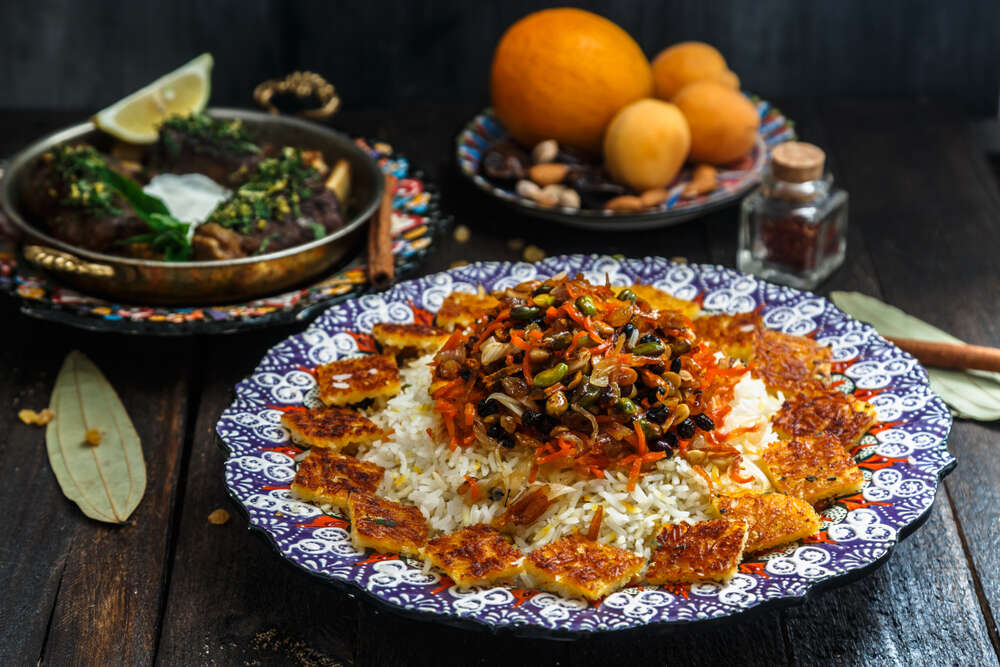 Top of the Iranian pilaf is decorated with pomegranate seeds. Drink it well with low-fat kefir or ayran.

At first glance, manti looks like Russian dumplings or Georgian khinkali. In fact, this dish has its own unique recipe and its own special taste.

The main thing in manti is the filling. In order to cook it, you will need lamb, beef or pork, or even several types of meat at the same time, according to your taste. In addition, you need to take tail fat, onions, cumin, coriander, black pepper and salt. The meat and tail fat are cut as small as possible, mixed with chopped onions and spices, thoroughly mixed and wrapped in a bag of salted yeast-free dough. 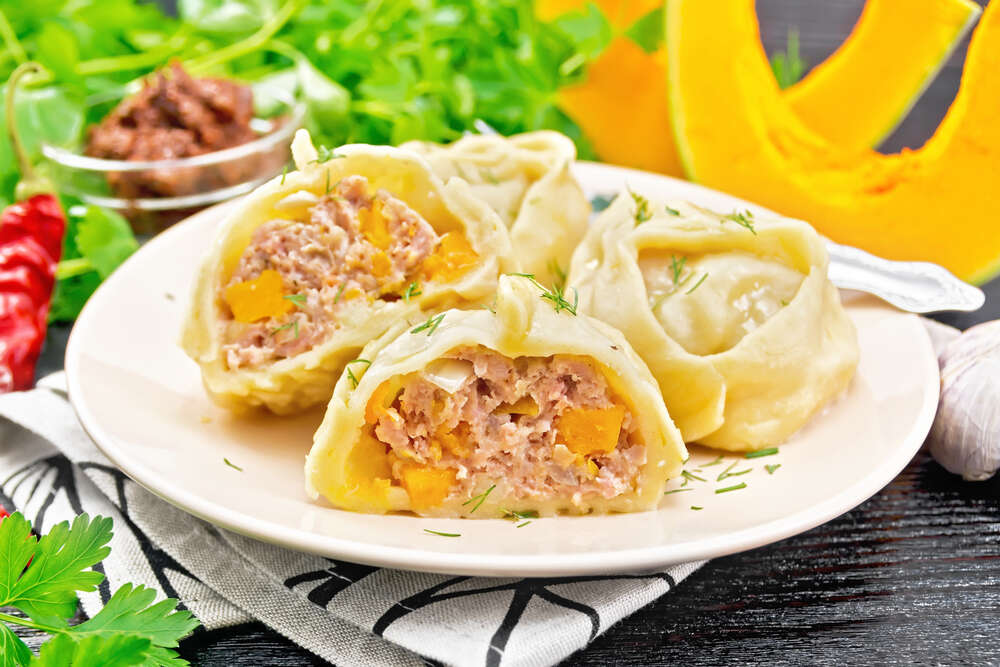 It is best to cook manti in a special mantle, but you can also use a double boiler. To prevent the dish from sticking to the surface, the bottom of each bag can be dipped in oil. You need to cook manti for about 50 minutes, serve with a sauce, which you can also make on your own.

Rich and hearty laghman is a traditional dish of the countries of Central Asia. This is something between a very thick soup and noodles with meat.

The best meat for laghman is mutton. Cut off fat from pieces of meat, put it in a saucepan, add vegetable oil and garlic. After the fat is melted, the garlic is taken out, and meat and onion rings take its place. At the same time, a tomato paste is made in a blender, to which finely chopped garlic is added. 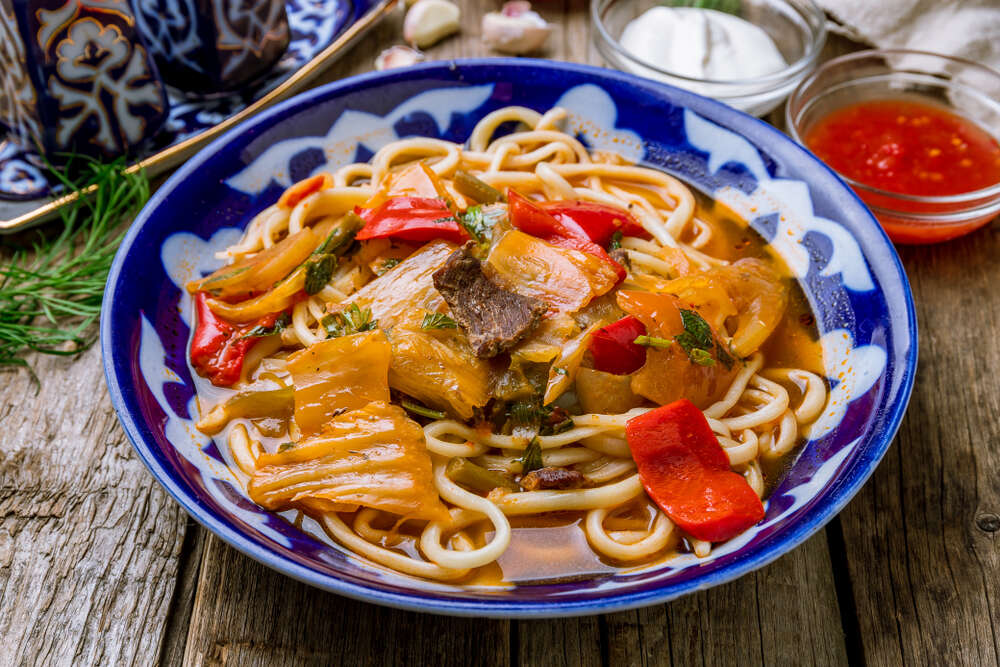 While the meat is fried in a saucepan, you need to chop vegetables - celery, peppers, carrots and radishes. All this is added to the lamb, covered with a lid and stewed for about 15 minutes. After that, tomato paste with garlic is added there, and then boiled noodles along with water. You need to stew laghman until the lamb becomes soft. Sprinkle it with herbs.

If the laghman becomes too thick during cooking, then you can add hot water to it. The consistency should be like a thick soup.

In fact, kofta is meatballs familiar to everyone, which are served in most Eastern countries. The recipe varies from country to country, but it's always fantastic.

Turkish kofta is prepared on the basis of minced beef. A couple of finely grated onions without onion juice are added to it as well as chopped white crackers and a chopped egg. Then you need to add a special component that gives Turkish kofta a unique taste - mineral water with spices (oregano, cumin, paprika, black pepper). At the end, chopped parsley, mint, pepper and garlic are added to the minced meat. 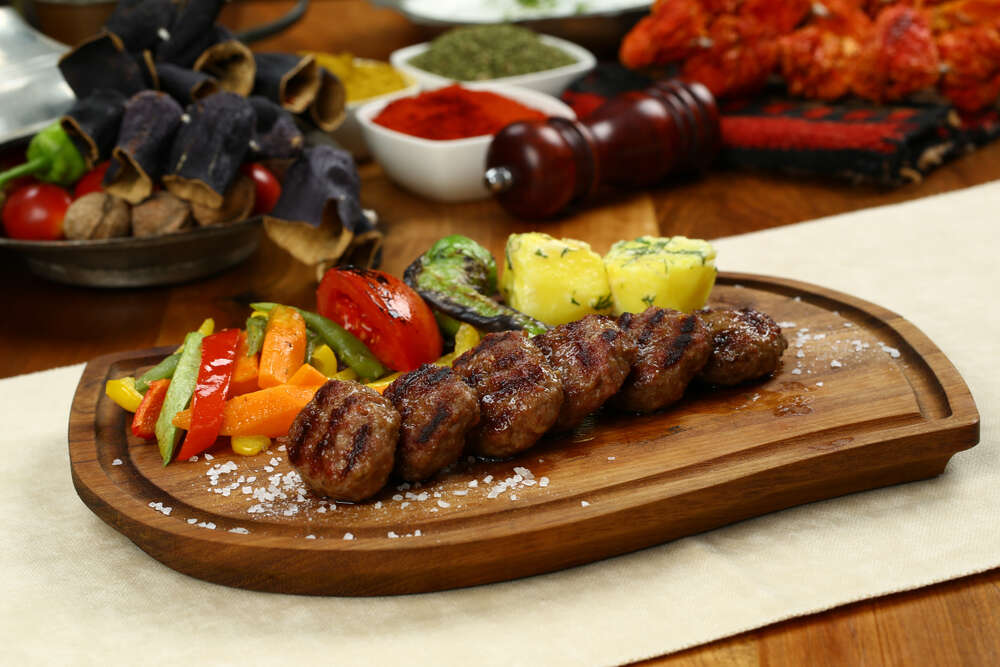 It is better to fry Turkish kofta not in a frying pan, but on a grill, in the absence of the latter, an ordinary cast-iron frying pan is also suitable. The dish is served with vegetables fried on the same grill or pan.

Eastern dolma is a close relative of domestic cabbage rolls. Almost all the countries of the Middle East are arguing about the authorship of this dish. But regardless of who came up with this dish, it is very delicious.

The classic filling for dolma is lamb, but you can use pork or even chicken. Chopped onions, dried herbs, salt and pepper are added to minced meat. Then you need to add rice to the minced meat.

The filling is wrapped in grape leaves washed and soaked in salted water, the leaves are folded into envelopes, the envelopes are laid out in a wide saucepan and stewed for about an hour. Dolma can be served hot or cold, and sour cream or unsweetened yogurt is great as a sauce. 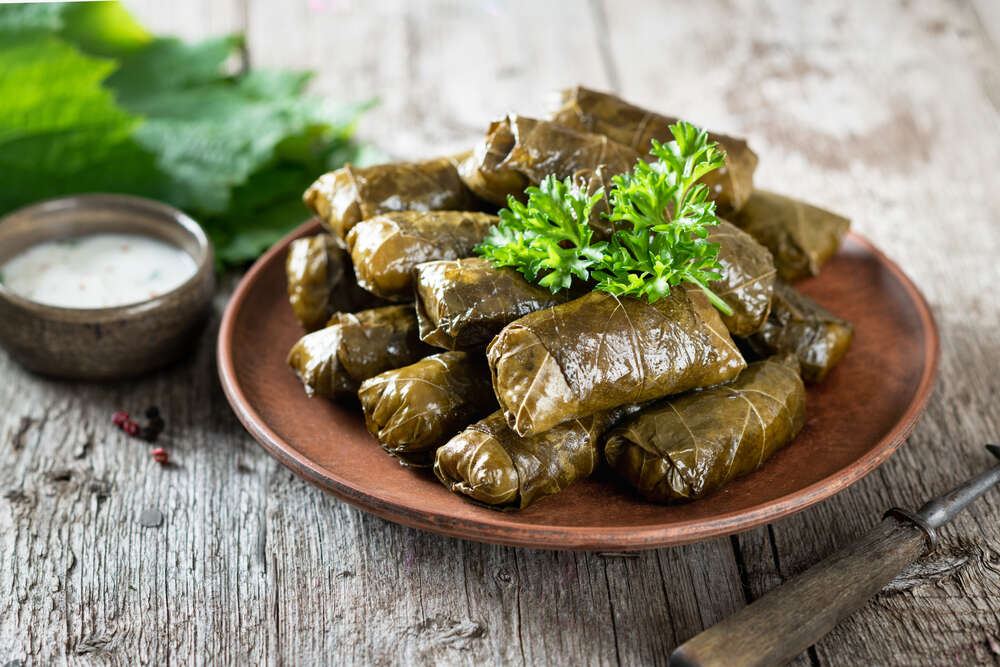 The Eastern cuisine is a paradise for meat lovers. And the most authentic and delicious dishes can be tasted only in their homeland. So you need to book flights and go on a gastronomic tour around the world.