The worlds's most delicious and unusual teas

Almost everyone drinks tea. Someone prefers black tea, someone -green tea, someone prefers a hot drink with sugar, and others prefer a cold drink with milk. In many countries, the simple process of brewing leaves has turned into complex ceremonies and rituals that include dozens of nuances. There are a great many varieties and types of tea, among them there are trendy and original ones. Today, we are going to talk about the latter. 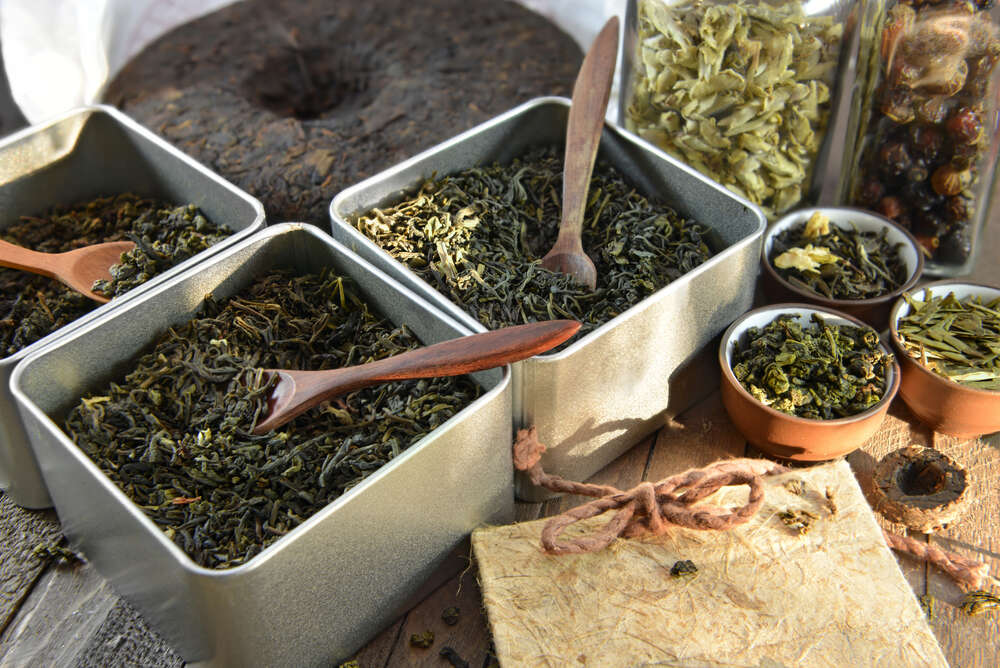 In addition, there are herbal teas. In fact, they have nothing to do with tea plants, they can be collections of herbs, roots, flowers and berries.

For true connoisseurs of tea, not only the type and variety of tea is important, but also the type of tea plant from which the leaves were collected. There are Chinese plant (grows in China, Japan, Georgia and Vietnam), Assam (Africa, India, Sri Lanka) and Cambodian (a rare hybrid of the first two). The whole leaves and that part of them, which was used to make the tea, are also important. Delicate young whole leaves are valued much higher than cuttings ground into dust.

Tea should also be brewed wisely. If water is too hot, it will burn the leaf and spoil the taste of the drink, if water is too cold, it will prevent the leaf from opening properly. You should not overexpose tea in water, then it will taste bitter and acquire properties harmful to the body. Make sure you check the recommended temperature and brewing time for each type of tea.

But enough about the theoretical nuances, let's move on to the drinks.

Pu'er is classified into a special group of fermented teas, which are famous for their tonic properties. This variety is already more or less familiar even to those who do not consider themselves to be tea gourmets and is available in mass sales. The taste of the drink made from pressed tea leaves is specific, it seems unpleasant to some, while others, on the contrary, find it divine. You should drink it neat, without sugar and sweets, so as not to take away the unique aroma. 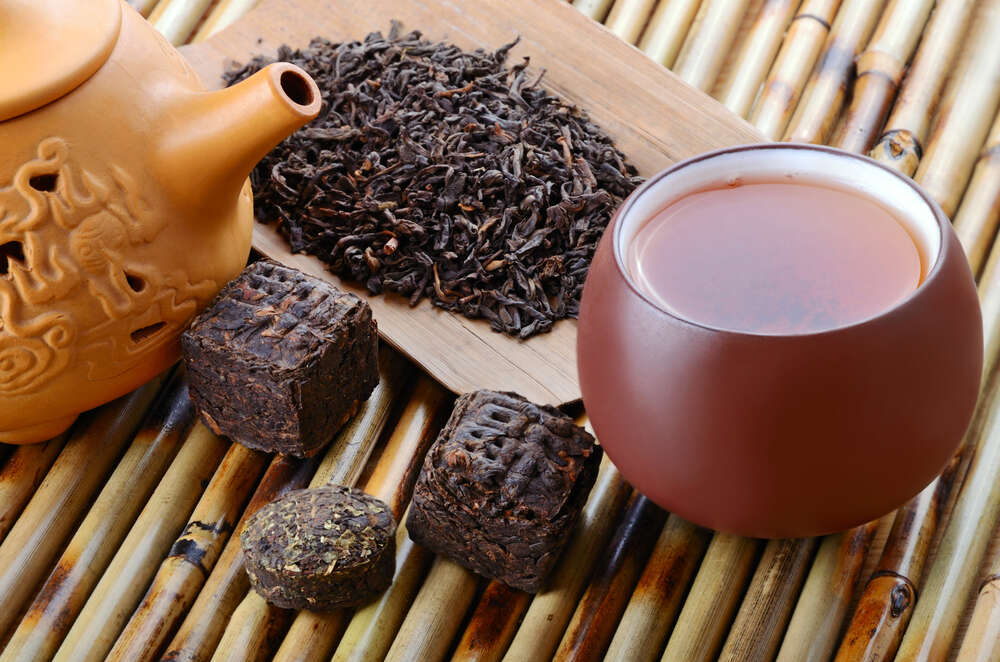 Pu'er tea, like any other good tea, should be brewed in several stages. First, it should be washed (in China this stage is called “washing peasants; hands”), then it should be brewed according to the Chinese or European method. In the first case, special dishes are used, and the water is drained and poured several times, in the second, an ordinary teapot is needed. One portion of pu'er tea is enough for 5-10 infusions.

The Japanese are famous entertainers in food and drink, and tea is no exception. There are many interesting teas in the Land of the Rising Sun, such as genmaicha, GABA and sencha.

Genmaicha, a Japanese green tea, is roasted tea leaves and dried rice. This drink is not recommended for dieters because of its calorie content. Interestingly, genmaicha was invented by poor Japanese peasants who had almost nothing but green tea and rice.

Brew genmaicha in boiling water up to 5 minutes. The longer the tea is brewed, the stronger it becomes. 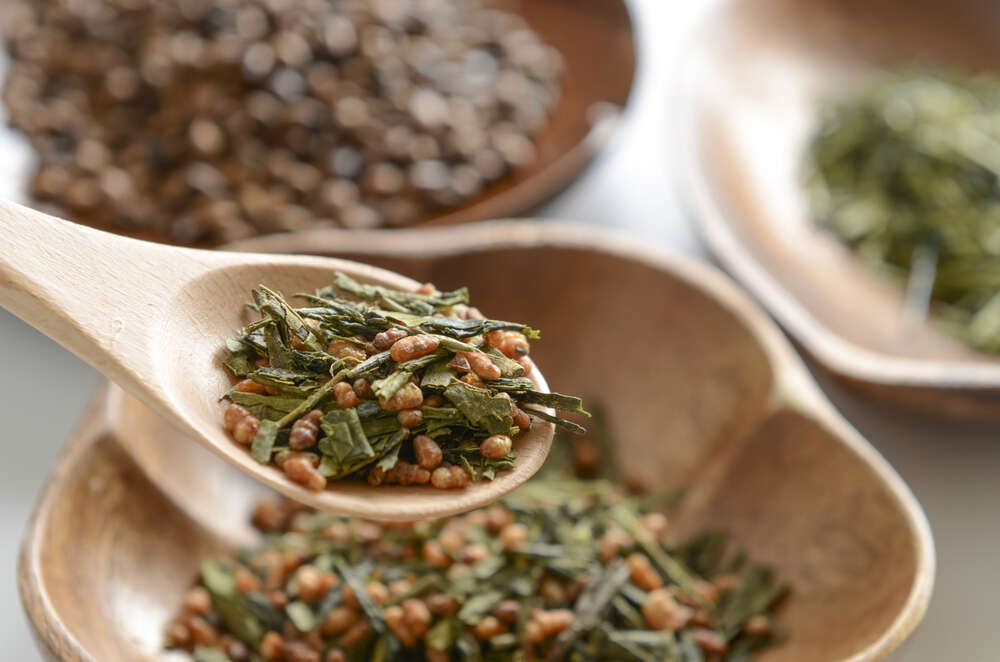 This is another unusual tea from Japan, a relative of the popular matcha. Tea leaves are steamed for it and twisted into very thin strings. The drink turns out to be very invigorating, with an unusual taste. Real sencha tea is very expensive - about 6 thousand dollars per kilogram. So do not believe if someone tries to sell you the so-called "real sencha" for much less money. 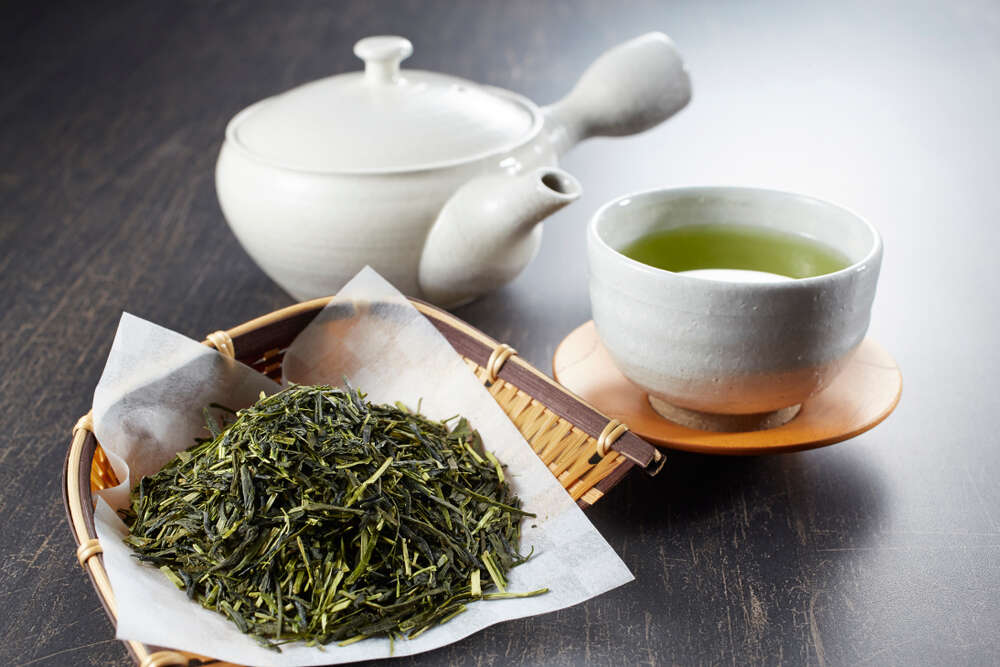 It's a relatively new type of tea that appeared in the 80s of the last century thanks to scientific research. It is made from various oolongs. GABA's specialty is that the fermentation of the leaves takes place in an oxygen-free environment. Due to this, aminobutyric acid (aka GABA), useful for the body, is preserved in them almost in full. 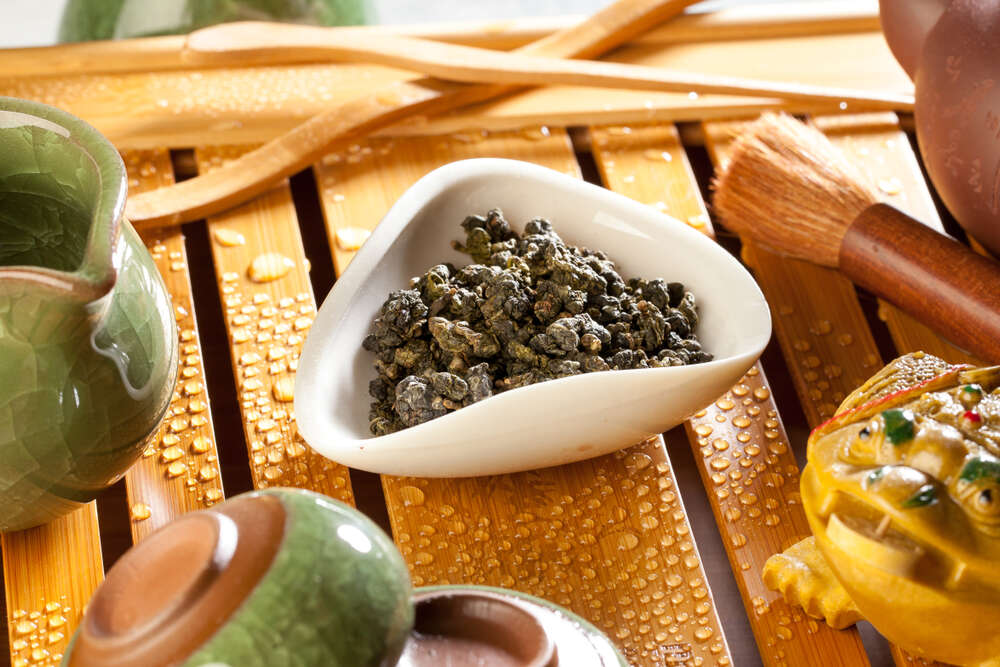 GABA tea has a lot of useful properties. It stimulates blood flow in the brain, helps fight diseases of the nervous system, and regulates metabolism. Drinking it is recommended for people with high blood pressure, with chronic insomnia.

The Chinese call this variety the emperor of tea, and for good reason. The taste of the drink combines the best features of black and red teas. You can brew it, like pu'er, several times. Keep in mind that oolong tea contains caffeine and invigorates as well as strong coffee does, so you should not drink it before going to sleep.

A popular subspecies of oolong is milk oolong tea - Taiwanese tea, which differs from other varieties in a light milk flavor, hence the name. This flavor appears due to the fact that the harvested leaves are processed with milk extract. Tea is not only tasty, but also healthy, helps to lose weight and is good for skin rejuvenation. 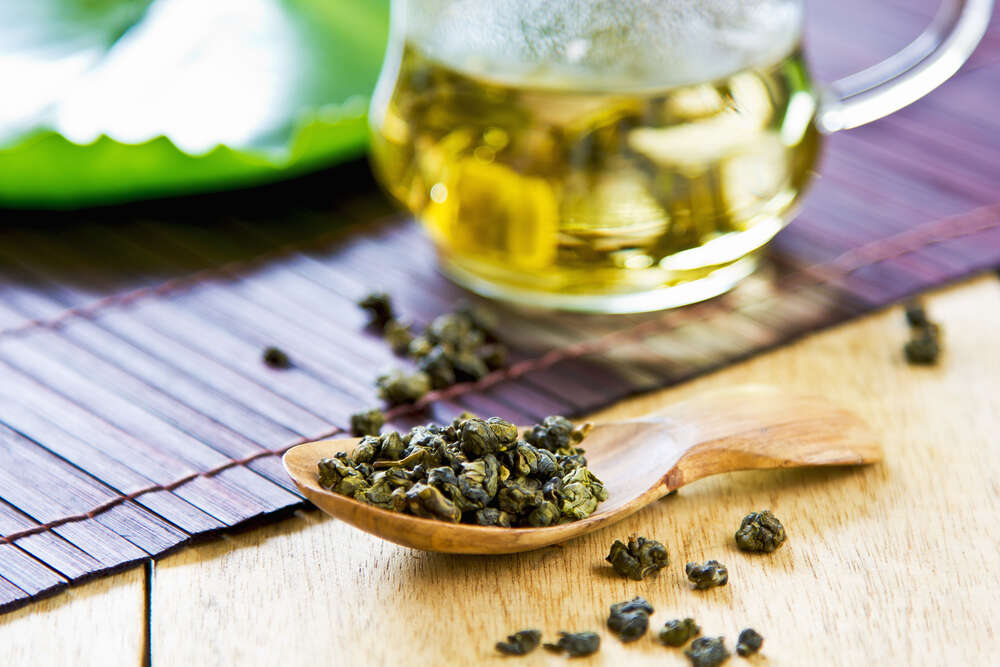 According to the rules of the tea ceremony, you need to brew oolong tea in a porcelain teapot, and leave it for no more than a minute.

Sometimes Tieguanyin, another more expensive type of tea, is called milk oolong, if leaf processing technology was disrupted. At the same time, the right Tieguanyin is highly valued.

And then there's the Big Red Robe. In Chinese, the name of this type of oolong sounds like Da Hong Pao. This is not just tea with an original taste, but also the world's most expensive tea, the price per kilogram is around 500 thousand dollars. It is due to the fact that the leaves were collected from only six plants, and the total weight of tea harvested per year is 0.5 kg.

In 2007, the collection of Da Hong Pao stopped, so now it is almost impossible to get this tea.

The Chinese call this type of tea green pearls, or Li Long Zhu, the English call it gunpowder, but the essence of the drink does not change from the name. Green tea with a light flavor of cereals and fruits is brewed very beautifully. In hot water, tightly rolled granules open up into ribbons and threads, and watching the process resembles meditation.

Green pearls, like other teas, should not be brewed in boiling water. The tea is poured with hot water up to 80 degrees, and the first infusion is drained to wash away the bitterness. 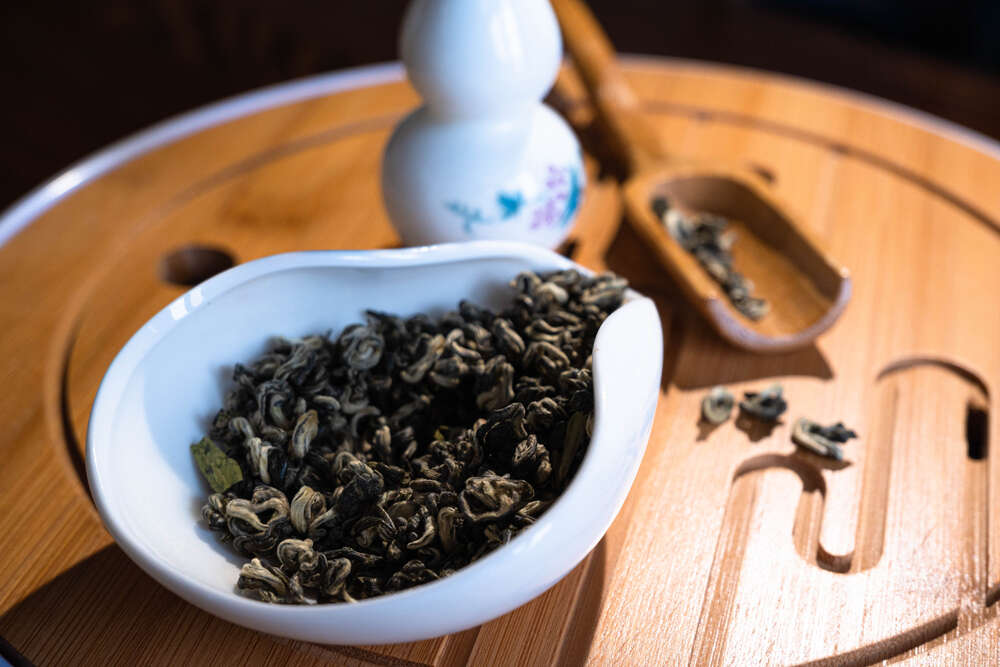 Here is another unusual Chinese tea, which is also called daffodil or water hermit. Its highlight is not in the brewing technology, but in the taste. The drink with the color of a noble cognac tastes like fruit, flowers, caramel and even chocolate. Unlike light white or green teas, the taste is very pronounced and rich.

This red tea is not only delicious, but also healthy, and the Chinese drink it to strengthen the immune system. High-quality red tea during the drying process is moistened with lychee juice, from which the drink eventually acquires a bright aroma and sweet taste.

Interestingly, the vast majority of the world's most expensive teas come from China. Here are some of them: Ansi, which is a very rare white tea, yellow Junshan Yinzhen and green tea Tai Chi oolong. But there is tea worth its weight in gold in other countries. For example, the famous Darjeeling grows on a single plantation in the Indian Himalayas. Collecting teas is an elite hobby, and the price for a particular variety depends on the rarity of the plant, the age of the tea and many other parameters.

It's a very popular herbal tea in Thailand, which can be bought even outside Southeast Asia nowadays. It is made from the flowers of a local plant, and when brewed, it gives the liquid a bright blue color. It’s one of the most photogenic teas. The taste of the drink, unfortunately, is less original than its look. But the Thais consider it to have a lot of useful properties. 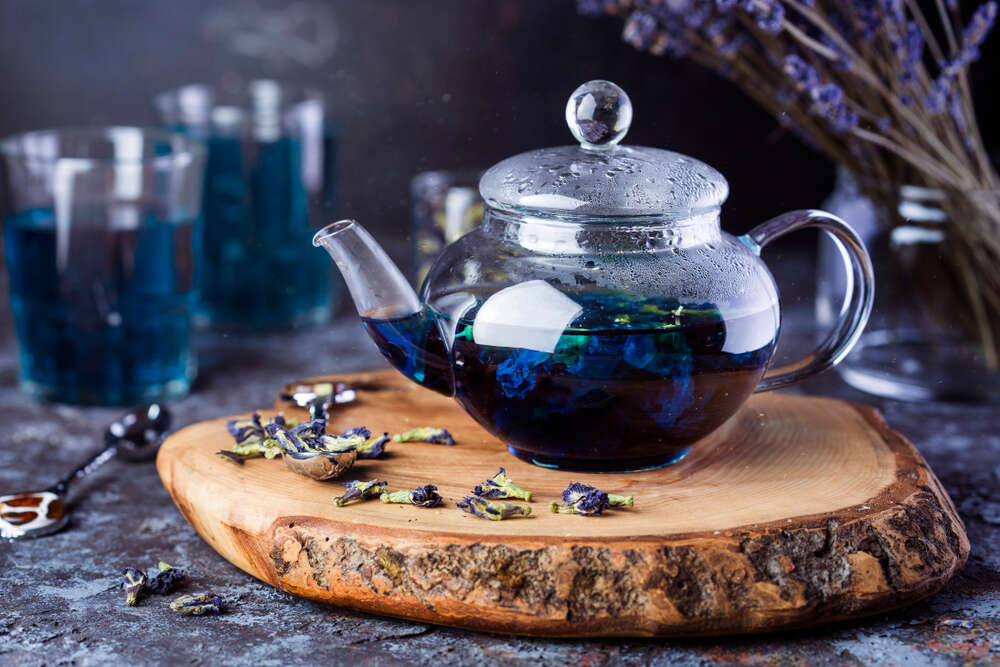 There is one trick when brewing blue tea. If you drip fresh lemon juice, it will change color from blue to raspberry.

This is a traditional tea of ​​the Paraguayan Indians, spread far beyond Central America. The drink has not only original taste, but also tonic properties that outshine even strong coffee. Mate is not recommended for people with blood pressure and heart problems, and certainly should not be taken before bed. 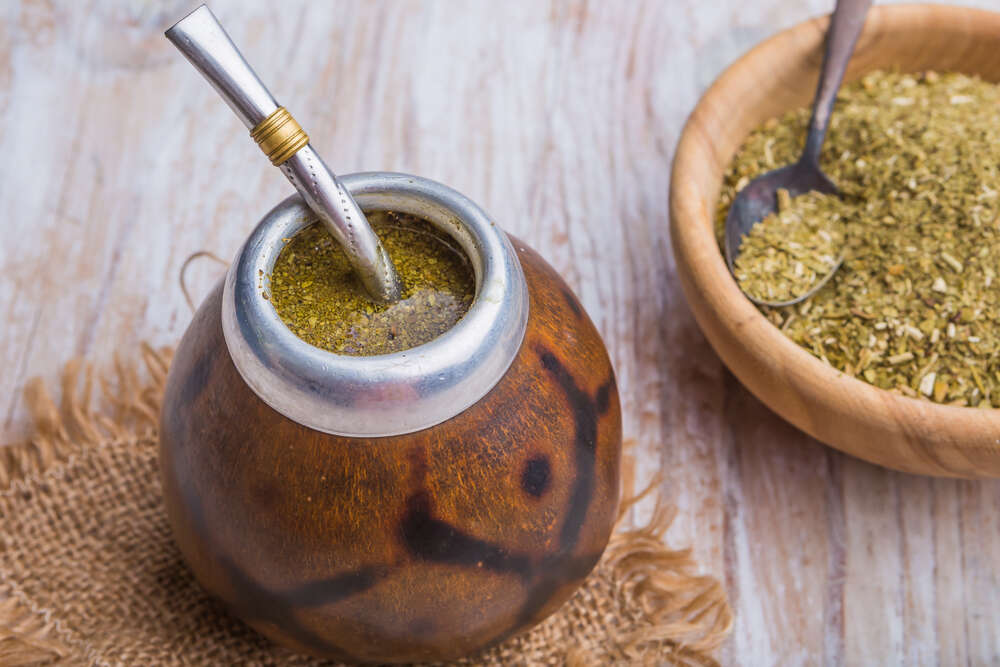 Mate is brewed in a wooden calabash gourd. The tea is moistened by a third with hot water, but not with boiling water, then a bamboo or metal tube is inserted inside, and only then the tea is completely filled with water. It is better to drink mate slowly and in small doses, savoring its sweet bitterness.

This tea is obtained from powdered and then tightly compressed matcha leaves. Immediately after harvest, the leaves are evaporated in sea water with algae, after which they turn into matcha tea powder, familiar to many connoisseurs. This powder is mixed with rice paste and water, squeezed through a sieve, dried and cut into small sticks.

The taste of kokeicha absorbs the aromas of all the components that are used in making tea. There is a subtle hint of sea salt, seaweed, and the fresh taste of young tea. It is necessary to brew the variety no longer than two minutes, and it is better to drink it with sugar or honey, since in its pure form, kokeicha is noticeably bitter. 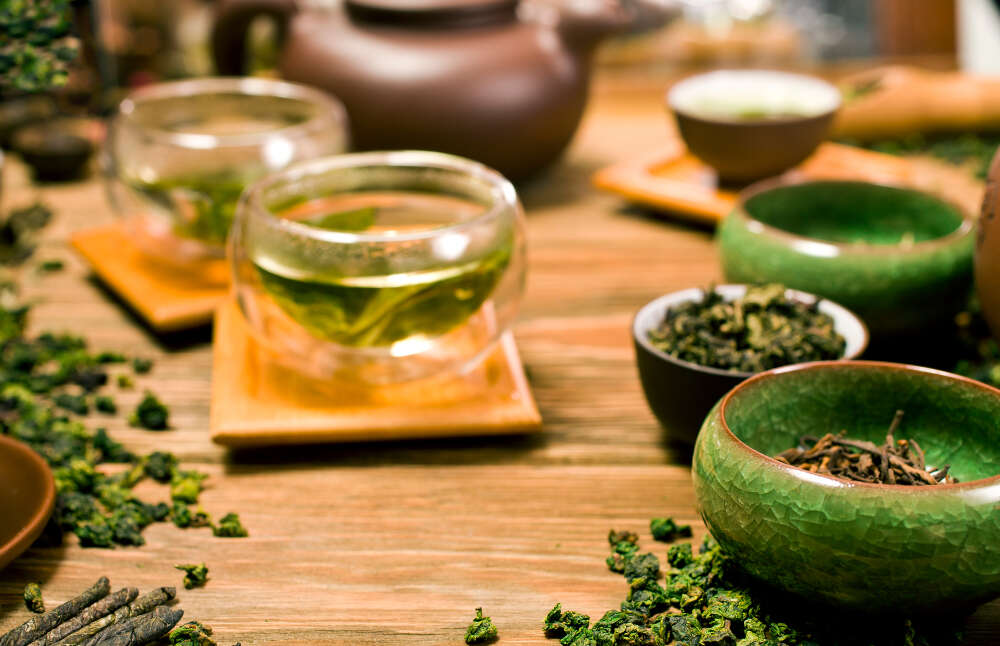 As you can see, even such a familiar drink as tea is full of surprises. But we have considered only some varieties. In different countries, there are different original recipes for making even the most prosaic black tea.