Northern lights, aurora borealis, fox fires ... this atmospheric phenomenon has many names, but none of them can convey even the smallest part of its mesmerizing charm. This is exactly the case when it is better to see something once than to hear about it a thousand times. And in order to make it easier for you to catch the heavenly lights, we have prepared answers to the most frequently asked questions.

First of all, you need to be north of the 60th parallel. Of course, you can see the Northern Lights not only near the North Pole of the planet, but also near the South Pole, but Antarctica is not the most comfortable place in terms of conditions and logistics. Therefore, the vast majority of Northern Lights hunters go to the countries of Northern Europe or America. We will tell you more about the best places to observe the multi-colored tints in the sky.

Secondly, you need to drive away from settlements. Light pollution from cities or highways makes it difficult to see the aurora. The best place to observe is a large open space in the wilderness, or at least the outskirts of a small village.

Even in northern latitudes, fox fires are not visible every night, but on average every alternate night. But there is also a nuance here - you need a cloudless sky, otherwise you will only see clouds. This means that it makes sense to follow the weather forecast. Or even better, install one of the special applications on your smartphone or subscribe to a newsletter from one of the websites that notify you about the likelihood of the appearance of the Northern Lights in the coming days. Aurora is most likely to be seen between September and March. Experienced observers even know the time when nature pleases with a fabulous spectacle more often - from 10 pm to 3 am.

Please note that the camera and the human eye may perceive the Northern Lights differently. Sometimes it happens that only a pale green haze is visible to the naked eye, but in the photo, the fox fires are burning with might and main. The key to good aurora photos is a tripod. You will have to take pictures at a long exposure, so hand-held photos will come out blurry and fuzzy.

And last but not least, dress warmly. If you are not going to observe the radiance from a hotel room with a glass roof or from a car window, then you will have to spend a lot of time outdoors. And the "freshness" in northern latitudes can reach -45°C. A thermos with hot tea or coffee will also not be too much, but you should avoid alcohol. Its warming effect doesn't last long.

It would seem that Russia with its endless northern expanses is a perfect place for catching the Northern Lights. But actually it is not. Most places north of the 60th parallel are very problematic to reach, the tourist infrastructure is very poor, and frosts are serious there.

In terms of logistics and climate, the most comfortable options for watching the Northern Lights in the Russian Federation are the Murmansk and Arkhangelsk regions. In the vicinity of Murmansk, you should pay attention to the villages of Pechenga, Vidyaevo or Teriberka, as well as the Khibiny Mountains. The latter will delight you with minimal light pollution and will disappoint you with an almost complete lack of infrastructure.

Other options for those who want to observe aurora borealis in Russia are Vorkuta in the Komi Republic or the village of Khatanga in Taimyr. 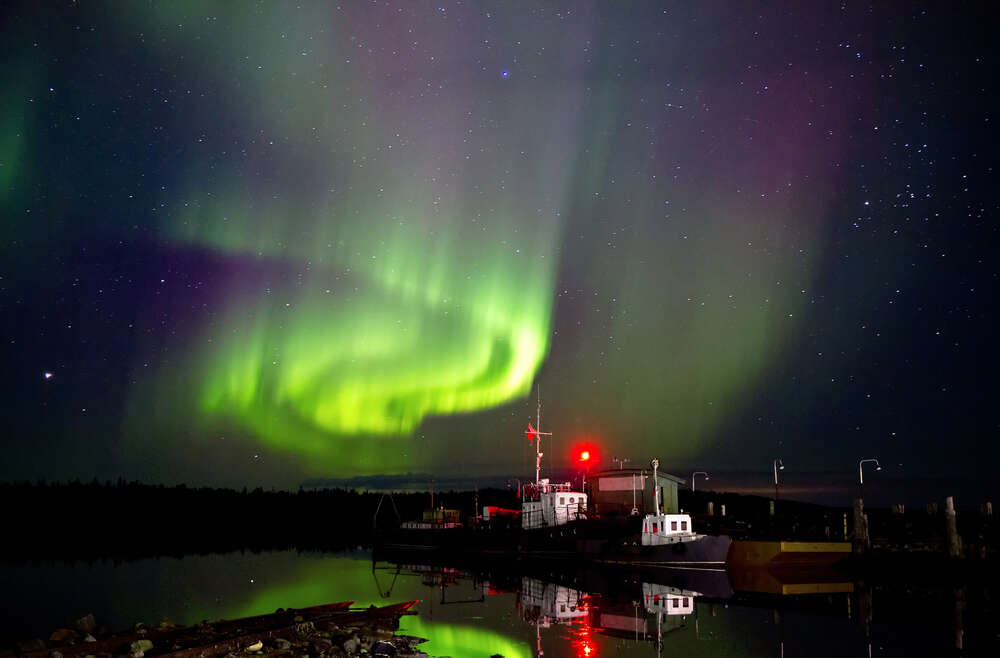 The most reasonably priced of the European options. At the same time, the tourist infrastructure for observing the Northern Lights in Finland is well developed. There are simple wooden log cabins, igloos with a glass roof, and even mobile cottages that a dog team carries along the snow. Tours to the tundra are offered in huge numbers in Rovaniemi, the capital of Lapland. As a bonus, most of the tourist lodgings in Finland are equipped with a sauna.

One of the best Northern Lights viewing spots in Finland is the village of Ivalo. It is near it that the Kakslauttanen Arctic Resort is located with the famous igloos with transparent roofs. Watching the lights shimmering in the sky from a warm bed is not like freezing your feet somewhere in the middle of the tundra. Such pleasure is not cheap, but an unforgettable experience of a night under the stars is guaranteed.

Very high chances of seeing the Northern Lights are in the Kilpisjärvi, Sodankylä and Rovaniemi regions. The website of the Finnish Meteorological Institute sends a free newsletter, where experts write about the chances of the appearance of fox fires on a specific date.

The northernmost centers of civilization in Europe are located here, which means that the chances to see the Northern Lights in comfort are the highest.

An option for those who are not afraid of difficult routes is the Lofoten Islands. Places that are easier to reach are Alta, Tromsø and Longyearbyen. Alta is home to the world's oldest observatory for the study of the Northern Lights. Tromsø is called the gateway to the Arctic, it is located 350 kilometers beyond the Arctic Circle, but the city has a well-developed tourist infrastructure. Longyearbyen is the capital of Svalbard and the closest point to the North Pole that you can reach on your own, and not as part of an expedition. At all these points, you can not only look at the radiance, but also put a check in your head: "I've been to one of the northernmost points of civilization." 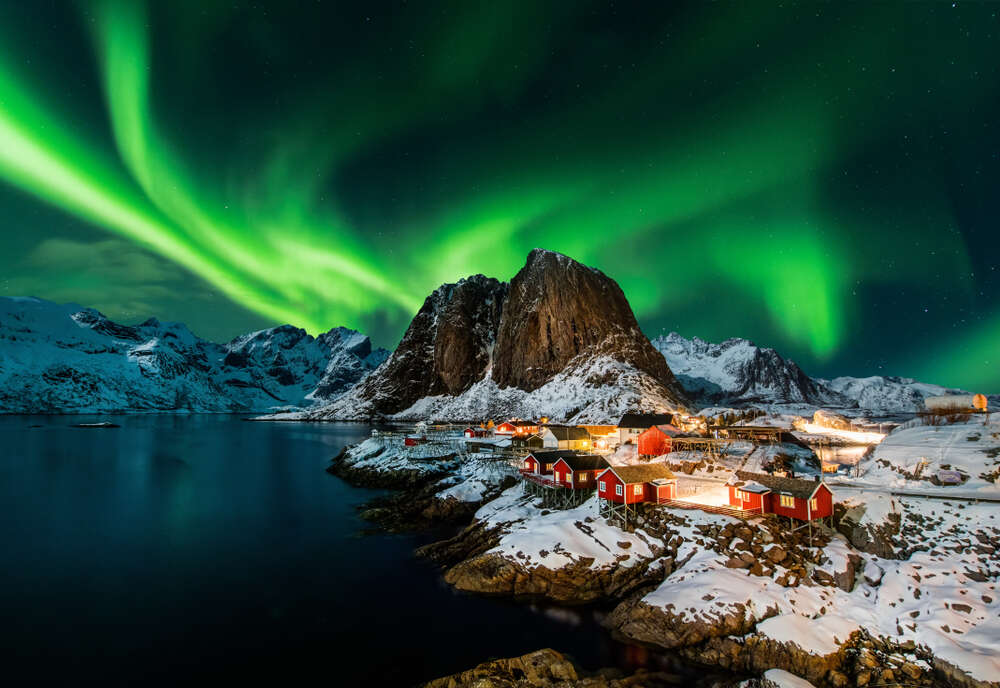 Do you want to see the Northern Lights, but don't like going outside in a bitter frost? Then Iceland is your choice. Thanks to the warm current of the Gulf Stream, the climate here is milder than in Norway or in the north of Russia. In winter, the temperature in the capital of the country is around zero. The flip side of the Gulf Stream is that it often rains in Iceland in winter. Accordingly, the sky is often covered with clouds.

The driest city in the country is Akureyri, where many tourists go to catch the Northern Lights. The second most popular location is the lagoon with the difficult to pronounce name Jökulsárlón. Here, in addition to the high chances of seeing aurora in the sky, you get luxurious nature. If time and finances permit, stop in Iceland for a few days to take a look at its geysers and waterfalls, plunge into the thermal waters and take stunning photos of the fjords.

It is interesting that you can even see the Northern Lights in the capital of Iceland, Reykjavik, if you get into some unlit park at night. And on the northwestern outskirts of the city, the Grotta lighthouse is located, near which locals love to watch colorful flashes in the sky.

There is a special research center in Sweden for observing the Northern Lights - Aurora Sky Station. In 2015, Lonely Planet called it the world's best place to see the Northern Lights, and this title is well justified. The center is located in the middle of a national park and can be easily reached in an hour from the town of Kiruna. Accommodation in Kiruna is much cheaper than on the territory of the research center itself.

You can get a double unique experience in the village of Jukkasjärvi. This is not only a great place to watch the fox fires, but also the birthplace of the famous ice hotel. The building, built entirely from blocks of ice, melts every spring and is rebuilt in winter. Don't worry, there are more traditional (and cheaper) places to stay in the village.

In the United States, you can see the Northern Lights only in Alaska, but in Canada, there is much more choice. The famous glow can be seen in the states of Yukon, North Saskatchewan, British Columbia and Yellowknife.

Seeing the Northern Lights is an unforgettable experience of a lifetime. So choose a location from our list and plan an exciting adventure.

Read more:
➱ The best countries to travel by car

➱ Reporting from the Residence of Santa Claus in Alaska