An Independent Trip To The Aeolian Islands: Everything You Need To Know

The Aeolian Islands are an archipelago of 7 distinctive islands on the northern coast of Sicily, which have been included in the UNESCO World Heritage List since 2000. They are united by their volcanic origin, but each island is unique and with its own characteristics.

Lipari, Panarea, Alicudi, Filicudi, Stromboli and Vulcano form the Lipari commune, which is why they are often called the Lipari Islands. There are three more communes on the seventh island called Salina.

Untouched nature, volcanic beaches, picturesque bays around the islands - isn't it a perfect place to relax from the bustle of the city? In our new article, we will tell you how to get to the Aeolian Islands and how to get around, when is the best time to travel, what to do on vacation and what to try from the local cuisine.

The high season on the islands is July and August. At this time, the weather is almost always good, but keep in mind that the temperature can reach 40 degrees and even more, the Italians start the vacation season, so it becomes crowded and chaotic due a huge flow of tourists on small islands.

It is much more pleasant to spend a vacation here in June and September, as the weather is still great, but there are fewer tourists and more favorable accommodation prices.

April, May and October are also good for visiting the islands, if you are in the mood for an active holiday and are prepared for unpredictable weather conditions, but note that some cafes and restaurants may not be open during this period. 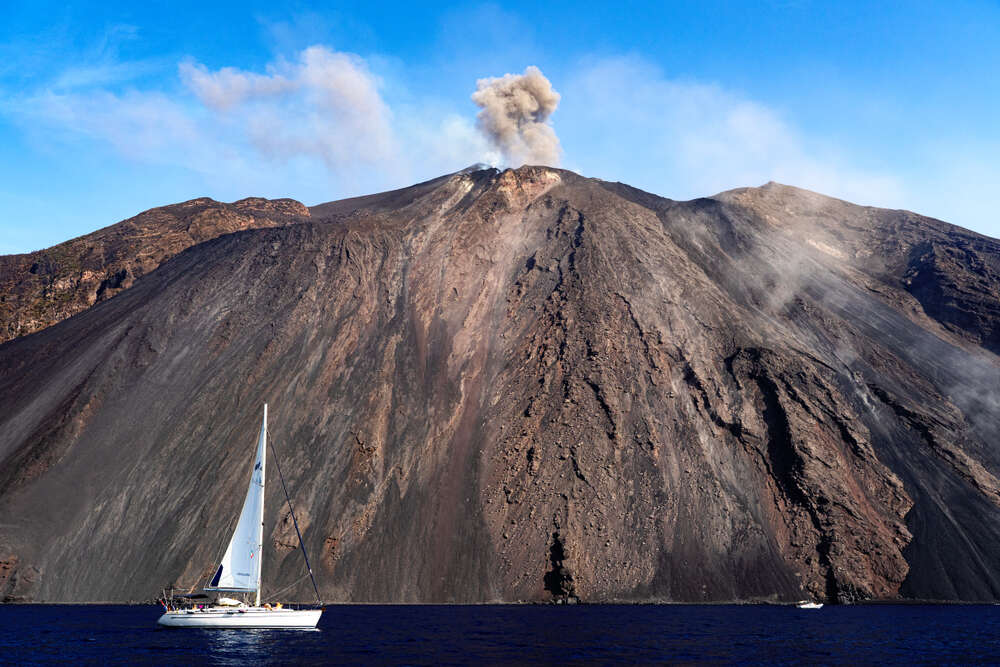 The fastest and most comfortable way is by plane to Catania or Palermo. These are the two main airports in Sicily, which are connected to the train station and the city center by public transport. Taxi can also be booked on site.

Next, you need to take the train to the town of Milazzo (2.5 hours from Palermo) or to Messina (1.5 hours from Catania), from where sea transport departs to the islands. If you are traveling with your own car, motorcycle or bike, then choose the ferry to Lipari.

Without your own transport, you can sail to any island on a hydrofoil (rocket), they are called aliscafo in Italy. Even out of season, regular ferry crossings are operated by Liberty Lines, which also runs between the islands.

A scooter is a perfect transport on the islands, especially if you need to drive through narrow streets. It is also convenient to travel on short distances by bike, and you can rent a car on the islands of Lipari and Salina. You should note that there are not many parking lots on the islands, and there are areas where movement is limited - if you accidentally turn in the wrong direction, the video camera will instantly record the violation. Also, local companies do not provide insurance in case of damage to vehicles, so be careful.

Lipari is the largest archipelago, where everyone will find something to their liking. For a beach holiday, head to the areas of Canneto and Acquacalda. It is difficult to get there without your own transport, but Urso buses run here regularly from the port. You can also rent a boat and sail to the bays, which are only accessible from the sea.

At the top of the archipelago in the Quattropani area, there is the Tenuta di Castellaro winery, which organizes sunset tastings and dinners overlooking their own vineyards.

In the historic center of Lipari, walk along Corso Vittorio Emanuele (the street with the most popular bars and restaurants) and climb up to the castle, which houses a museum and a park with ancient tombs. 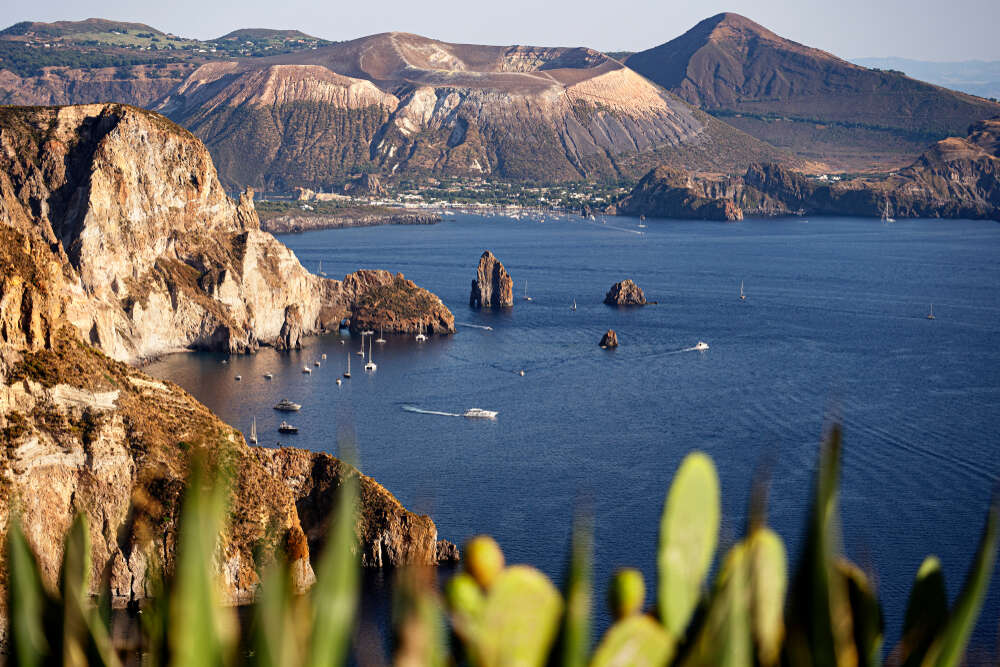 History fans will love the Luigi Bernabò Brea Regional Aeolian Archaeological Museum. They should expect to spend a few hours here, because the museum has about 40 rooms with archaeological finds from the prehistoric era to the Greek and Roman era! The volcanology hall is also interesting, as you can trace here the history of the emergence of the islands. The museum is open to visitors from Monday to Saturday from 09:00 to 19:30, on Sunday - until 13:30. Entrance is € 10, there are discounts.

Lipari Castle is located between two marinas - Marina Corta, where you can see how fishermen prepare nets for going out to sea, and Marina Lunga, where the tourist port is located.

Salina gained fame back in 1994, when The Postman was filmed here starring Massimo Troisi. In early June, the Pollara area, where the film was filmed, hosts the annual Caper Festival, where you can taste a wide variety of dishes from appetizers to desserts with this plant.

The island attracts with its mountainous terrain, and the peak of the dormant volcano Fossa delle Felci at an altitude of 963 m is the highest point not only of Salina, but of all the Aeolian Islands. 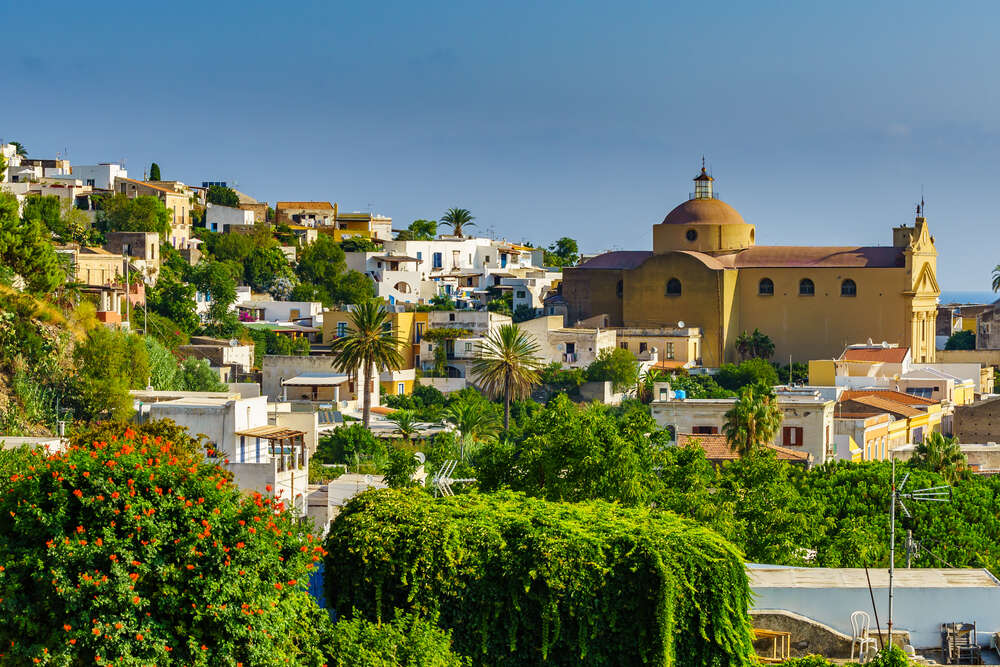 Panarea is the smallest of the islands, which is called a paradise even by locals. Its typical streets are narrow labyrinths with white houses and colorful plants. There are five tiny islets near the island (Basiluzzo, Dattilo, Lisca Nera, Bottaro, Lisca Bianca), where you can get with a guided tour or rent a boat, and swim in the open sea on the way. For this reason, Panarea is especially attractive for fans of the underwater world.

You can also observe a unique natural phenomenon due to the increased activity of fumaroles - steam jets emerge from the cracks that are formed at the foot of the volcanoes. They can even be seen underwater while diving or snorkeling.

The island has gained its popularity among travelers thanks to its open-air spa area with therapeutic mud and an active volcano with an easy ascent right up to the crater itself. Unfortunately, the baths have been closed for several years due to one incident, and there is no information about their reopening so far.

And from the beginning of October, an increased fumarolic activity of the volcano began: the hazard status on the island was raised to yellow, and while volcanologists are studying the cause in more detail, the ascent to the crater is periodically blocked.

An interesting fact is that the island bears such a name in honor of the Roman god of fire, Vulcan, and the word volcano, which is used in other languages, comes from the name of this island.

Stromboli is another island with an active volcano, the height of which reaches 2400 meters, and only 924 of them are above sea level, and its underwater part is 25 times larger than the island itself!

About 500 permanent inhabitants of the island live on a time bomb, the activity of which is carefully monitored by volcanologists. The last major eruption occurred in 2019, after which the ascent to the top was closed. At the moment, it is allowed to climb independently to a height of up to 290 meters and up to 400 meters, accompanied by a licensed mountain guide or volcanologist guide. It is recommended to rent trekking shoes (from € 6), warm clothes and a flashlight with an elastic band, which can be fixed on the forehead, freeing your hands (from € 3). The cost of guided trekking starts at € 25, according to reviews, one of the best companies for such a tour is Magmatrek.

Stromboli is one of the world's most visited volcanoes due to its constant activity and relative accessibility for hiking.

If you do not plan to climb the volcano, but do not want to miss the opportunity to watch small spectacular eruptions, then you have two options: to book a table for dinner at the Osservatorio restaurant and watch the flashes at the top from afar, or go on a tour of Sciara del Fuoco and watch verything from the sea being on a boat. During this tour, some lucky ones manage to see a unique sight as a stream of fiery lava descends from the crater to the sea coast.

On the opposite side of the island, there is a small village called Ginostra with less than 50 people, which can only be reached by boat.

Alicudi is the westernmost and most isolated of the Aeolian Islands. It is not as popular among tourists as the neighboring islands, so there is still untouched wilderness here. Alicudi beaches are located in bays that can be reached by sea, although there is one near the tourist port.

Cars are banned on Alicudi, and mules provide transportation on the island, so it is considered to be a quiet oasis with fewer than 100 people (or even fewer in winter). Only part of Alicudi, located on the east side and divided into 5 small villages, is inhabited.

The highest point of the island is Monte Filo dell'Arpa, a mountain in the form of a cone of an extinct volcano, whose height reaches 675 meters above sea level and more than 1500 meters deep under water.

Alikudi still retains its original appearance, therefore it is considered to be a perfect place for those who search for peace and tranquility on vacation. 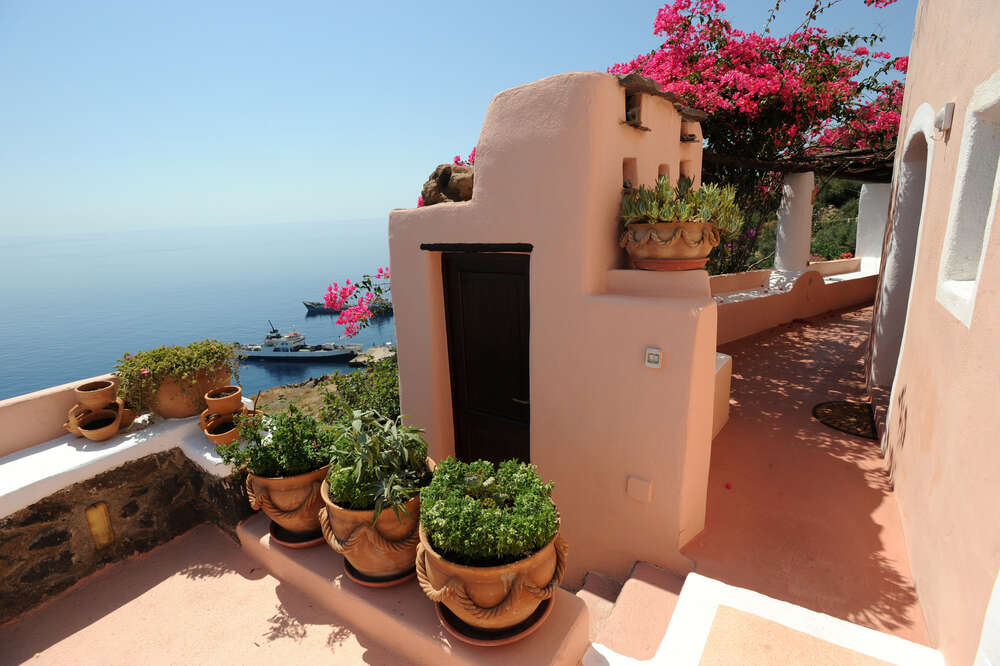 Filicudi is the oldest of the 7 islands of the archipelago, which is suitable for a secluded holiday by the sea, surrounded by beautiful nature. Along the coast, you can find deep caves such as the Grotta del Bue Marino and Punta Perciato, which are popular among divers, and cliffs with stunning views like La Canna. Monte Fossa Felci, the highest point of the island, is located at an altitude of 774 meters above sea level.

Almost all of Filicudi's beaches are of volcanic origin and therefore consist of large dark pebbles, with the exception of Pecorino Beach, which has several sandy sections.

Despite the fact that Filicudi is a small island, it can boast a unique natural environment that can be appreciated by boat trips around the island.

Aeolian cuisine has a distinctive flavor thanks to its unusual product combinations. Capers, olives, herbs and cherry tomatoes of the Pennula variety, which are grown on the islands, are often used for cooking local dishes. 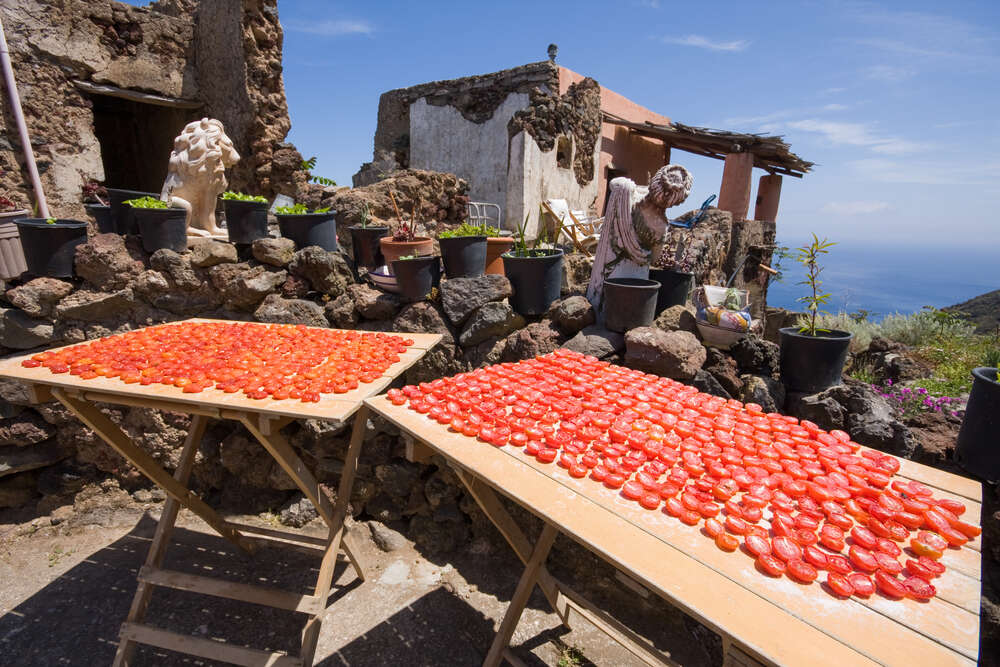 From local wines, we recommend to try Malvasia, which is also called the wine of the volcanoes. Malvasia delle Lipari is one of the oldest wines in Sicily, brought to the island by the Greek colonialists, and the main product of Aeolian agriculture today. In 1973, the wine received the DOC category, the official designation of the origin of the wine. The wine is divided into three types: one for meals and two liqueur versions that are served after dessert. 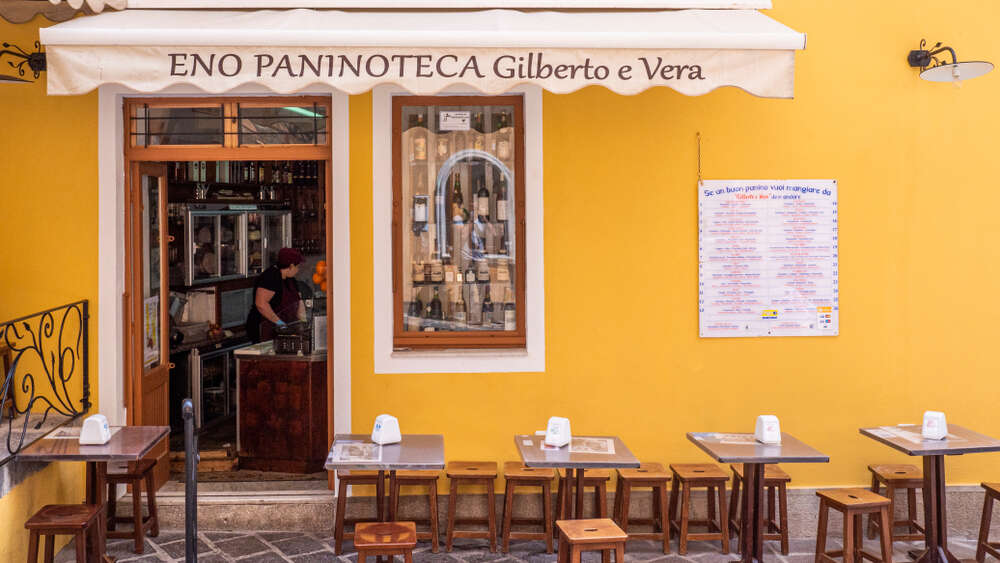 Speaking about desserts, we recommend granita, cannoli with ricotta (buy them where you see empty cannoli that will be filled in front of you) and brioche ice cream sandwiches.

We wish you an unforgettable trip to the Aeolian Islands!