The Island of Rhodes, a Greek Rose

Do you love Greece the way we love it? If you say yes, then Rhodes has definitely been or should be one of your destinations. Well, if you are ready to say no, then wait, because you may change your mind!

The first thing that comes to mind when mentioning Rhodes, is, of course, the Colossus of Rhodes. The giant statue of Helios was considered to be one of the seven wonders of the ancient world, but it stood for only sixty-five years, and then was destroyed by an earthquake.

Nowadays, no one knows exactly what the sculpture looked like, so the first thing to do in Rhodes is to try to imagine it, fortunately, images created by the imagination of various artists are enough, but inventing your own version is also not forbidden!

The exact place where Colossus could stand is also unknown. It was previously believed that it was located in the Old Port, so to see the ancient pier, a medieval fortress and windmills which will also be interesting.

The second candidate is Monte Smith, where picturesque ancient ruins have been preserved.

Interestingly, the question of the reproduction of the Colossus regularly arises, and they want to reconstruct it in the form of a lighting installation. Also, they talk about the construction of a real giant, which will house a museum and an entertainment center. No one has yet undertaken this noble project.

Maybe they are just scared of the ancient legend, which tells the island will go under water, if the statue is rebuilt?

What Rhodes is interesting for

It's the fourth largest island in Greece. It is part of the Dodecanese archipelago in the Aegean Sea. The island of Rhodes is bordered on the west by the Cretan Sea and on the east by the Libyan Sea.

Today, the island of Rhodes with its Mediterranean climate is the most popular holiday destination for tourists.

The island has the most popular resorts. Faliraki, where mostly young people go with many discos and nightclubs, is a popular resort for couples with children because of its clean sandy beaches. Ialyssos is chosen by surfing enthusiasts. Ixia or Kalithea is suitable for a quiet and comfortable holiday.

Rhodes, the island of the Sun and legends

Rhodes is a sunny and small Greek island, but very interesting at the same time. Here you can rent a car for a few days and drive it backwards and forwards.

Be sure to visit the capital of the island, the city of Rhodes with its knightly fortress, and the white town of Lindos with its acropolis, which is crowned with the famous stairs to heaven.

There are also natural attractions in Rhodes: the Kiss of the Two Seas, the Valley of Butterflies, Anthony Quinn Bay. And the sea is very beautiful here. It is different. There is a stormy Aegean and a calm Mediterranean. The best beach is located in Faliraki. It's a wide sandy beach by the calm sea, where you can enjoy gentle sunset.

Rhodes is popular not only for beach holidays, but also for many attractions. In Lindos, there is a magnificent acropolis, whose observation deck offers a magnificent view of St. Peter's Bay. In ancient Rhodes, which is also called the City of Knights, be sure to visit the beautiful Rhodes fortress. The main building is the Palace of the Grand Masters of the Order of John. Rhodes is also rich in a large number of monasteries, the most famous of which is the monastery of St. Panteleimon, which houses some of the relics of the healer.

Sea rides on yachts along the coast are very popular, tours are organized for tourists. You can take a ferry to the beautiful island of Symi with its unique architecture.

Greece is a perfect place for gourmets. On the island of Rhodes, an acquaintance with the national cuisine will be really a pleasant part of a trip. It's definitely worth a try. Greek dishes are Mediterranean cuisine and include meat, fish and olive oil. Such treats will conquer hearts of the most demanding gourmets.

Interesting facts about the island of Rhodes 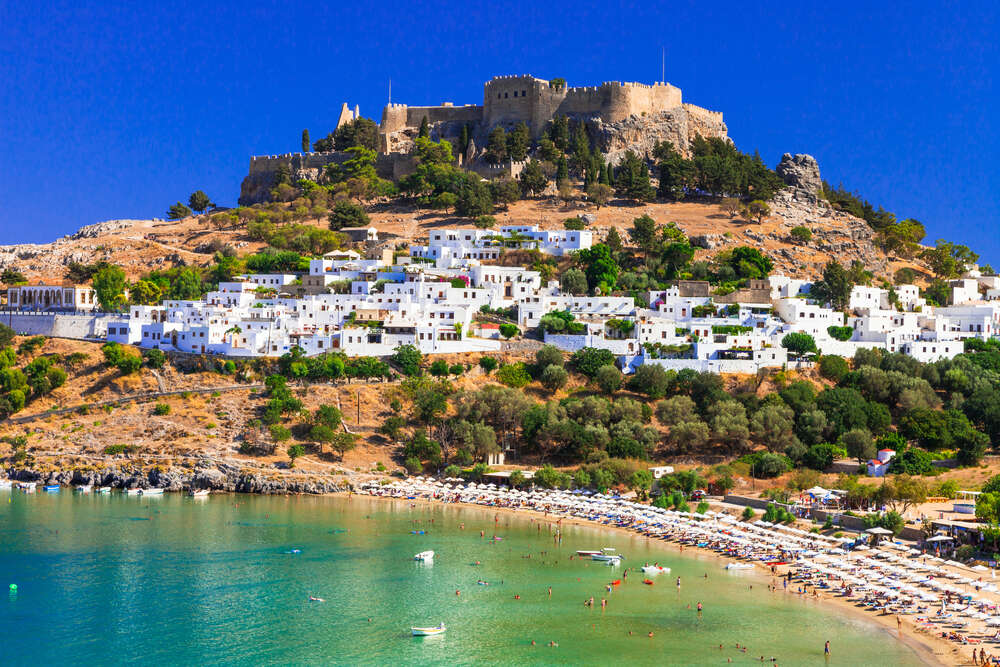 While vacationing on the island of Rhodes, be sure to visit its Old Town - you won't regret it! It is not expensive and very interesting. In order to get to Rhodes Old Town, you need to buy a ticket to the city of Rhodes, the cost of which is from 1 to 9 USD depending on where you stay. Buses from large settlements depart for Rhodes every hour, and tickets can be purchased at special box offices at the bus stop or from the driver.

Exploration of Old Town begins at the Liberty Gate, near the port of Mandraki. Opposite the gate, you will see the ruins of the temple of Aphrodite of the 3rd century BC. Then the road goes to Argyrokastro Square, where one of the oldest buildings of the Knights Fortress is located. Passing under the arch, you get to the Church of Our Lady of the Castle, built in the 12th century. After crossing the square, get acquainted with the former Knight's Hospital, which was built in the second half of the 15th century. The building has been preserved in its original form. Currently, the Archaeological Museum is located here. From Museum Square, go to the Street of the Knights (Ippoton), which is considered to be one of the well-preserved medieval streets, not only in Greece but throughout Europe. After passing it from one end to the other, you will come to the Palace of the Grand Master of the Knights of Rhodes. Nearby is the Clock Tower, which offers beautiful panoramic views of Rhodes Old Town, so that you can take great photos. After visiting the sights of the northern part, go to Hora, the southern part of the Old Town with the majestic Suleiman Mosque and the Hafiz Ahmed Agha Library. In addition, you can visit the Gothic Church of St. George of the 15th century, the Church of St. Paraskevi, the Sultan Mustafa Mosque and the Church of Agios Fanourios. 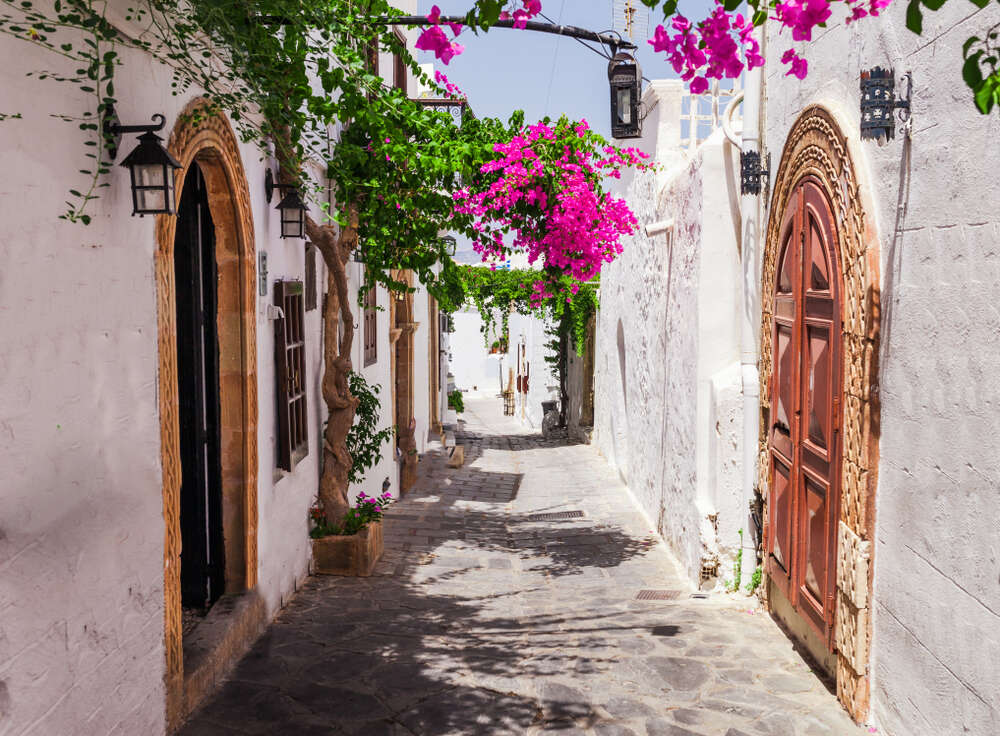 Valley of the Butterflies

The Valley of the Butterflies is one of the most famous sights of the island of Rhodes. You can only get to this wonderful place by sea.

It is a gorge with a river and lakes located in the reserve. This is the wettest area on the island, so in May, it is easiest for caterpillars to turn into butterflies. This process lasts a month and, around the beginning of July, thousands of insects emerge from the cocoons, which fill the valley.

Butterflies from the Arctiinae family live here. In the summer, they fly to mate here, and in September to fly away. They are attracted by the smell of amber trees as well as by humid but cool climate. 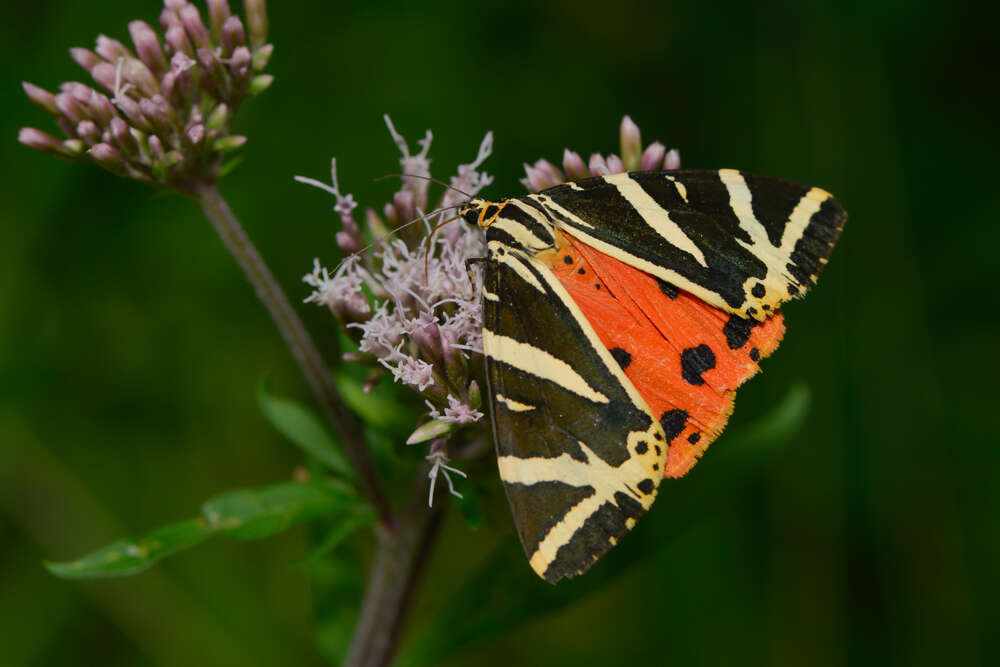 The town of Lindos, a real pearl of the island of Rhodes

Nowadays, it is a tiny town in the southeast of the island. And in the time of Homer, it was one of the most powerful polises of the ancient world, which was famous for brave sailors and lucky merchants.

A silent witness to the former greatness is the Acropolis of Lindos, which, incidentally, is second in importance after the world-famous Athenian. According to one of the legends, Alexander the Great himself visited it before the march to the east! The Acropolis of Lindos is located on a hill 116 meters high. You can go up and down either on foot or on donkeys.

In Rhodes, there is a church in almost every settlement. Let's focus on three of them. The Holy Monastery of Panagia Tsambika in Rhodes (lower monastery). The temple houses the original miraculous icon of Tsambika, the patroness of couples and children. The Church of St. Panteleimon. A part of the relics of the great martyr Panteleimon are kept here. The Church of St. Nicholas Fundukli. It is one of the oldest and most revered by inhabitants of the island. It dates back to the XIII - XV centuries. Its frescoes are well preserved. It is open 24 hours a day. It is cared for by the inhabitants of the village located in the valley 2 km from the temple.

The Church of St. Panteleimon is located in the traditional village of Siana, where locals treat guests to Rhodes with honey and pistachio jam. Pilgrims come here to worship the Holy Relics of the healer Panteleimon, one of the most revered Christian saints.

This is one of the most beautiful temples of Rhodes. The Church of St. Panteleimon has towers with a decorative clock, and real time shows a sundial on the south side of the southwest tower. The decoration of the church is impressive: stunning frescoes and ceiling paintings under the dome of the church, bright colored stained glass, huge silver chandeliers, marble columns, gilding on the walls and ceilings, carved iconostasis with icons in silver. In the play of sunlight, the interior of the temple looks magnificent! 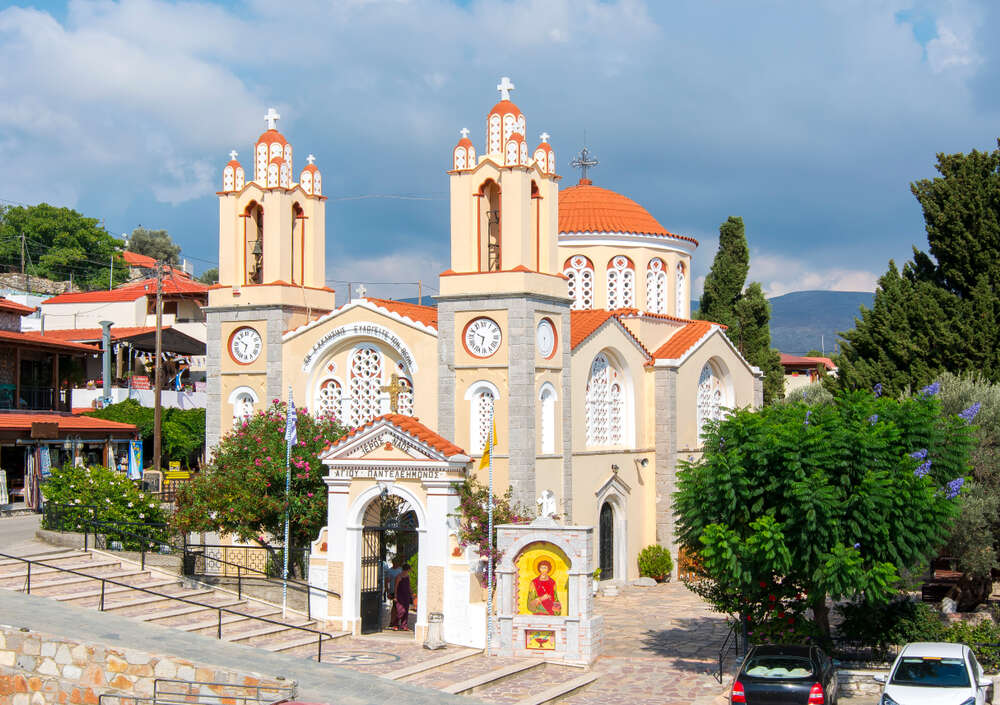 Palace of the Grand Master of the Knights of Rhodes

The Grand Master's Palace has long been a museum and a UNESCO World Heritage Site. Come here for a walk around the huge halls with an ascetic atmosphere, the same halls that housed the Knights Hospitaller of the Order of St. John wearing heavy armor many years ago. They cared for the poor, sick or wounded pilgrims in the Holy Land.

After the Crusaders lost the Holy Land, the residence of the Grand Master of the Order was moved to this palace.

And you can imagine that the Knights Hospitaller, this small group of fearless warrior monks, had been defending the island of Rhodes from Muslim attack for 213 years. Due to the impregnability of the fortress, Rhodes fell 70 years later than Constantinople. And by the way, the Turkish coast can be seen from the shores of Rhodes, and you can sail to Rhodes from Turkey and back very quickly.

Enter the Grand Reception Hall with an amazing mosaic on the floor, brought from the island of Kos, and with its famous windows, where onyx stone is installed instead of glass.

These windows are located almost under the ceiling, and passing through this stone, daylight turns yellow and becomes unusual, sunny and warm. Therefore, the knights had sunlight in the palace even in the gloomy days. These onyx windows are still one of the wonders of the palace, which tourists from all over the world come to admire. And the second wonder is the mosaics on the floor, brought from the island of Kos.

Here you can touch the antiquity and even hear the whispers of conversations of former residents of the palace. They lived here, died, perhaps loved, fought bravely, and the flowing blood of Christians and Muslims, spilled for the right to own a beautiful pearl island, formed rivers. And the same view from this window, apparently, was enjoyed by the 19 Grand Masters who lived in the palace, and thousands of knights-hospitallers and Muslim soldiers, and millions of people after them.

But today, these bloody events are over and the city sleeps peacefully to show its beauty tomorrow to newly arrived tourists who do not get tired of admiring this open-air museum city. 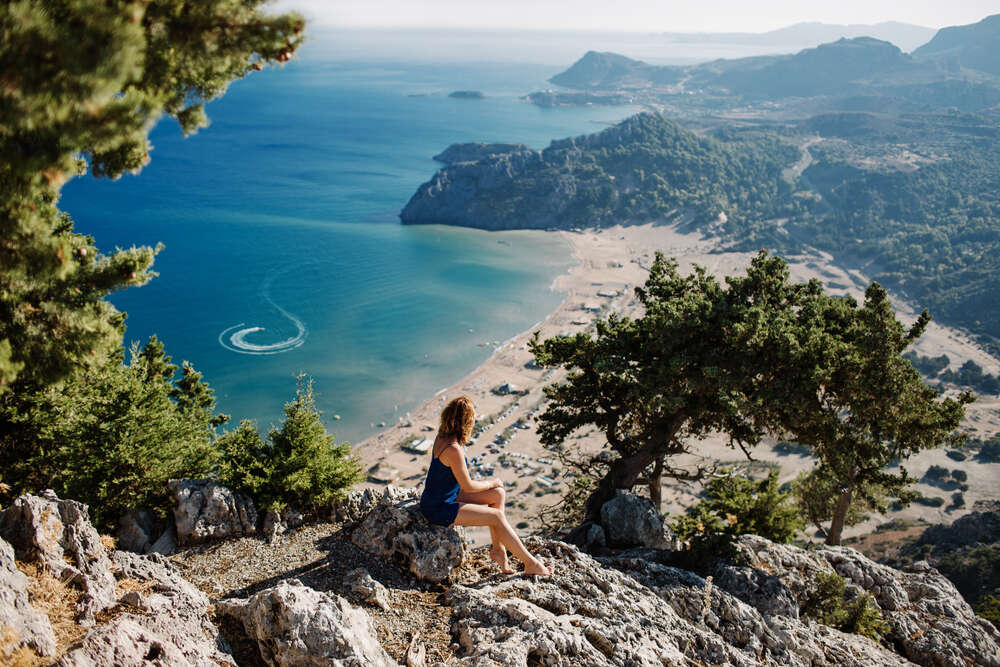 Must-see places on the island:

To cut a long story short, the sunny Rhodes, an island with a unique aura from different eras and cultures, is a must-see!

➱ Taboos & Prohibitions: What You Shouldn’t Do In Different Countries Of The World

➱ Traveling with a baby — madness or reality?