Massages and temples: things to do in Bangkok

If you judge the capital of Thailand by the film “The Hangover. Part II,” you can decide, that it is far from being the most pleasant city, where elephants walk in the streets, and locals start revolutions every night. In fact, Bangkok is nothing like that. So, what is it like? Noisy and at the same time calm, ancient and modern, bright and peaceful. In the city, there are no less forms and faces than Buddha statues in its temples, which are definitely worth seeing, Travellizy Team is sure in it.

This can be done in any of the hundreds of temples in Bangkok, but there are several among them that every tourist should visit. Most of the iconic temples are located within the Golden Triangle, the capital's tourist center. 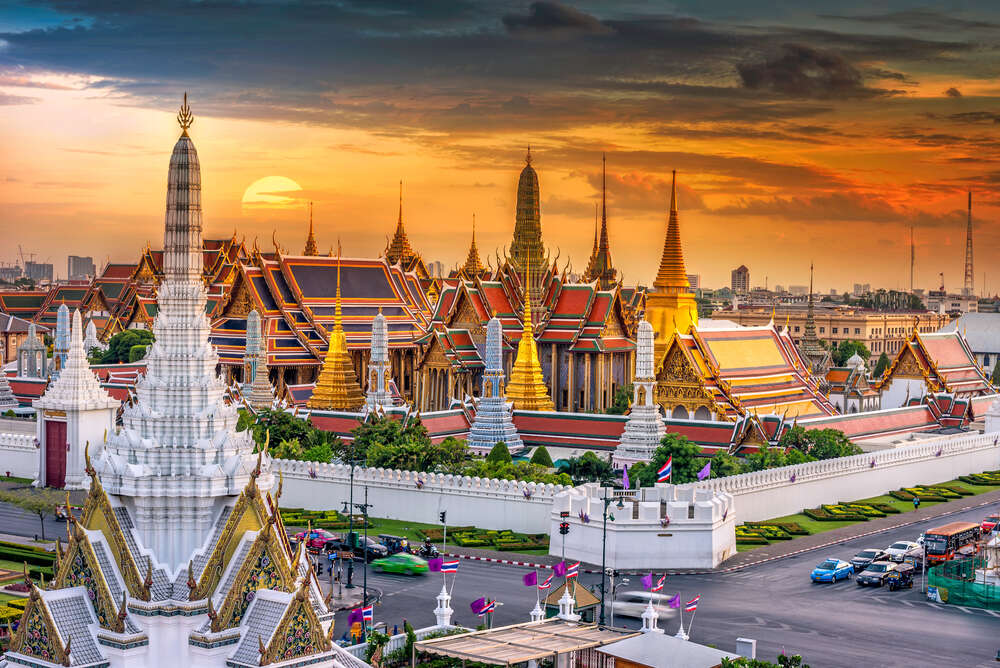 An excellent view of the city opens from Wat Saket, the Temple of the Golden Mount. Although it is located in the center, crowds of tourists are almost never here, mainly locals come to pray in the temple. A long staircase leads to the top of the temple hill, and at the end of the path, you will find Buddha statues, bells that you need to ring for good luck and many other attributes of the Thai religion. Entrance to the territory costs only € 1.4. 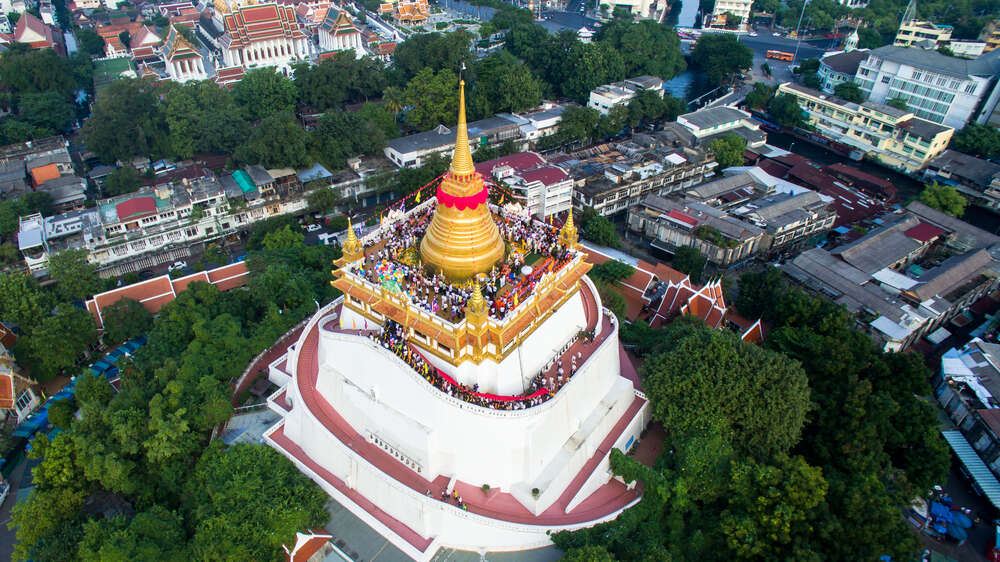 Another good view of the center of Bangkok is from the stairs of Wat Arun temple, whose snow-white stupas rise across the river from the royal palace. The temple looks especially picturesque at sunset, when its buildings are painted with the setting sun in all shades of pink and red. For entrance, you also have to pay € 1.4. 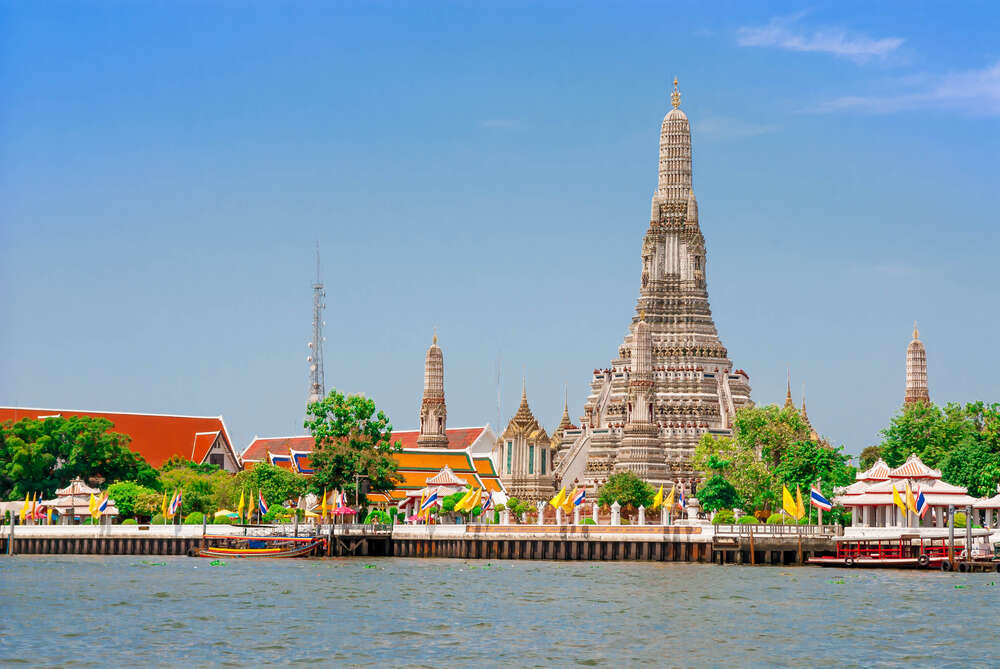 The famous statue of the Emerald Buddha can be seen in the temple of Wat Phra Kaew, and you can take a picture against the heels of a huge reclining Buddha in the temple of Wat Pho. You can wander through the courtyard of the latter for more than an hour, examining a colorful mosaic on dozens of different-sized stupas. Entrance to Wat Pho is more expensive than to other temples, it is € 5.5. 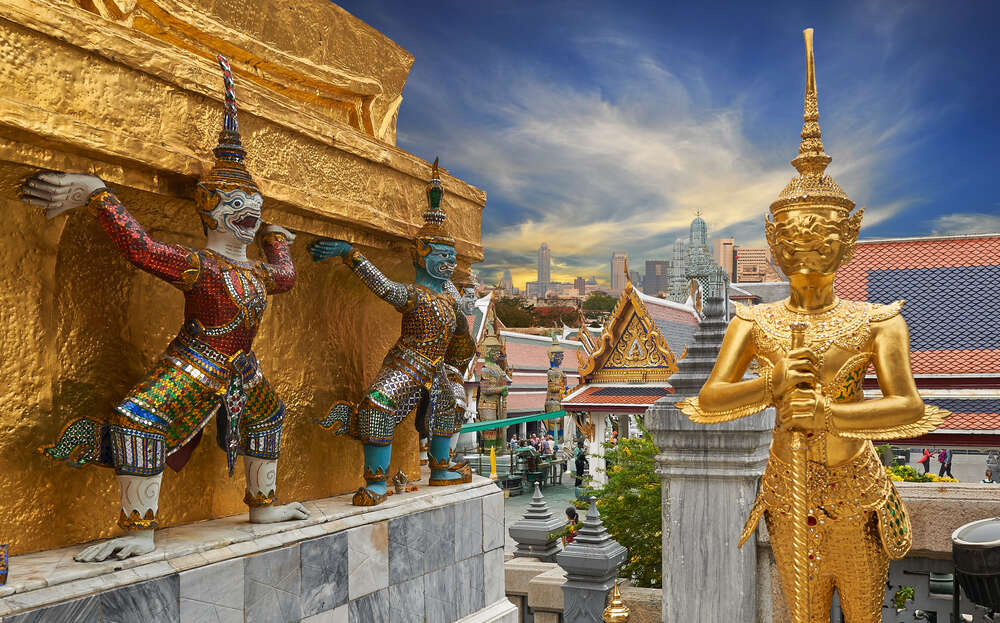 Ride along the channels

City transport in Bangkok is represented not only by buses and subways, but also by boats. The entire Thai capital is pierced by Khlong channels, through which motorboats scurry around. A ride on such a boat is a real adventure, you will learn to quickly jump into it from the pier, will help other passengers to lower the curtain on board to protect themselves from splashes from the oncoming boat, and all this fun costs around 0.3 euros. Boats run from morning until late in the evening; each berth must have a route map and a schedule. 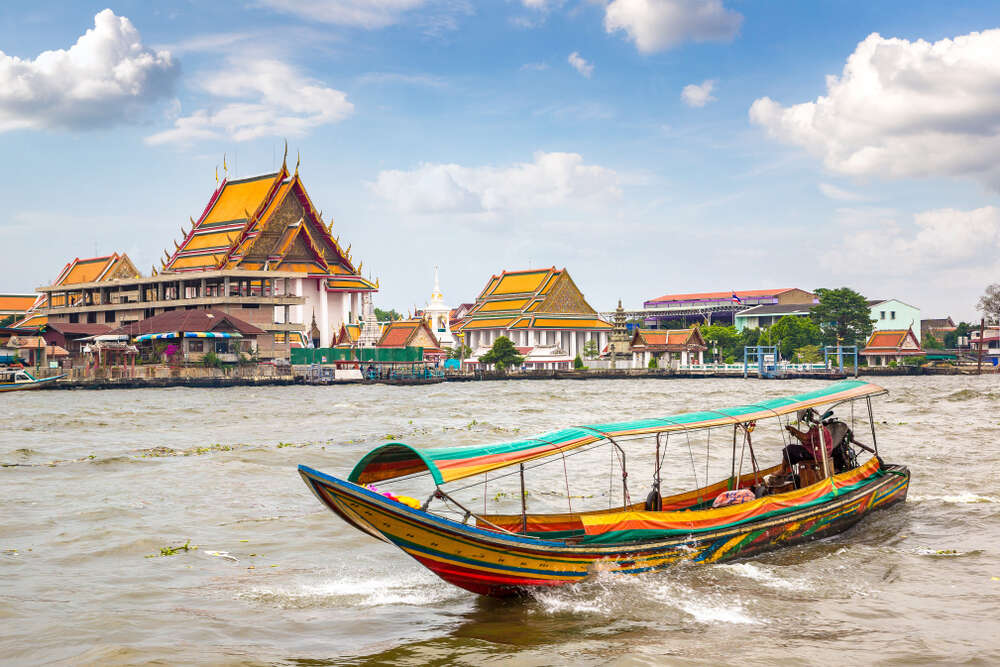 Another option to see Bangkok from the water is to board a boat that runs not along the channel, but along the Chao Phraya River. This can be either urban transport or a cruise ship, on board of which you can be served lunch.

Go to the market

Even the most ordinary Bangkok market will give you a lot of unforgettable experiences. Noise, din, exotic fruits and songbirds, antiques and household appliances, pedestrians and mopeds. And, of course, street food, that no Thai market can exist without. 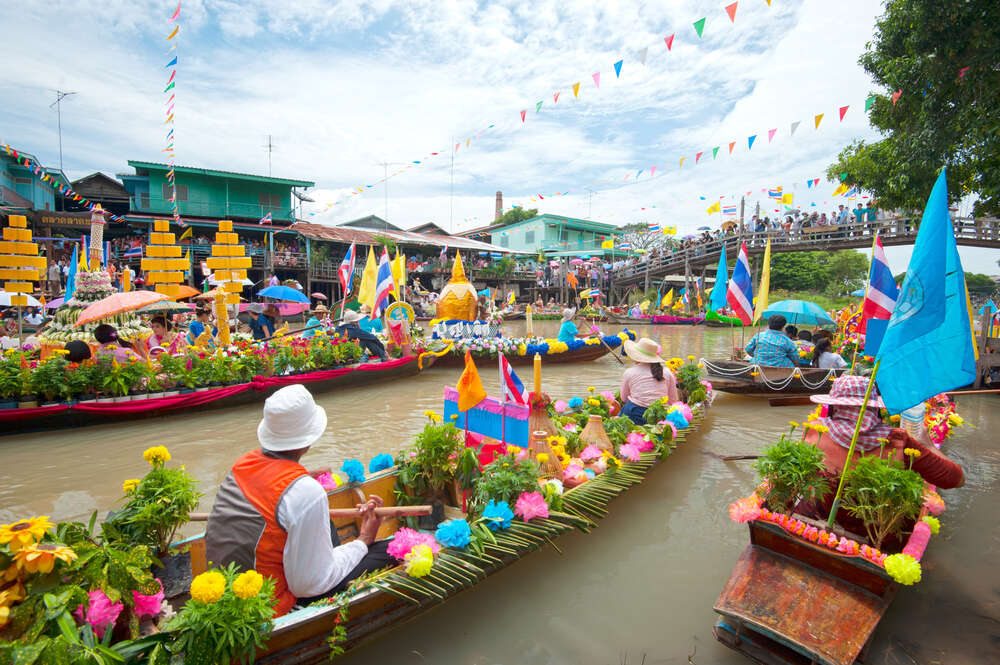 Bangkok's largest market is Chatuchak, located near the eponymous park and metro station. It is so huge that maps are provided at the entrance, and you can literally buy everything there. The amulet market, which is located near Thammasat University, is much smaller and calmer. It is here where monks and ordinary Thais choose their personal talisman or Ganesha statue for home. 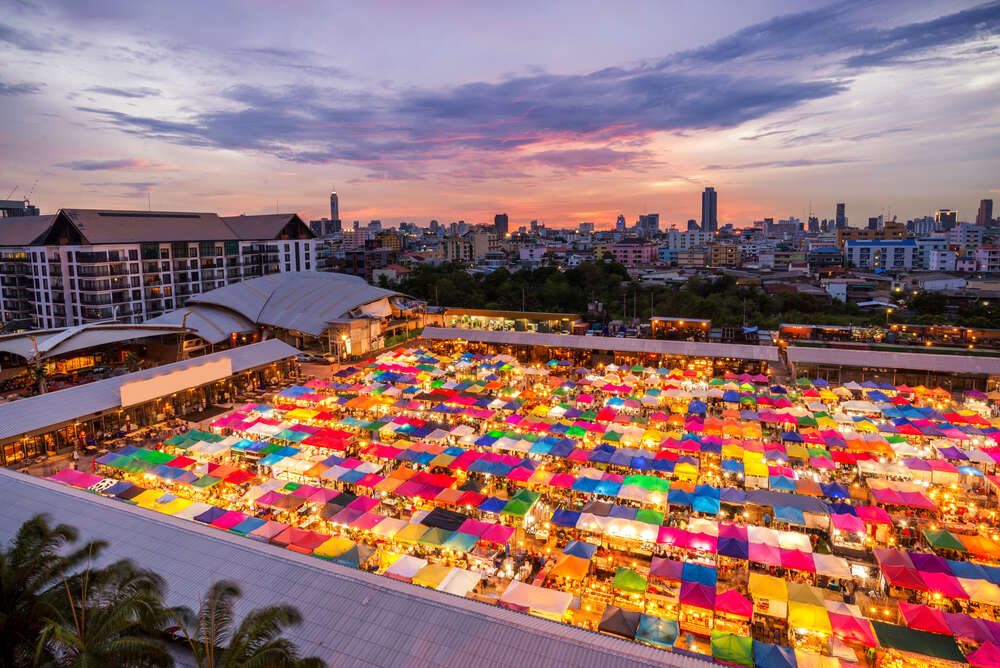 Bangkok's Chinatown is one continuous exotic market, and if this exotic is not enough for you, then you should visit a floating bazaar or shopping arcades on the railroad tracks. There are several floating markets in the capital and its surroundings; each of them operates according to a complex schedule tied to the lunar calendar. The easiest way is to get to the Talingchan market, which works only on weekends, but in the suburban Damnoen Saduake, brisk trade on boats takes place every day. By the way, the last episode of “Bondiana” was filmed here. On the rails near Ma Klong station, they sell all sorts of things, and literally a dozen seconds before the arrival of the train, the merchants quickly curl up to lay out their goods again as soon as the last carriage rumbles. 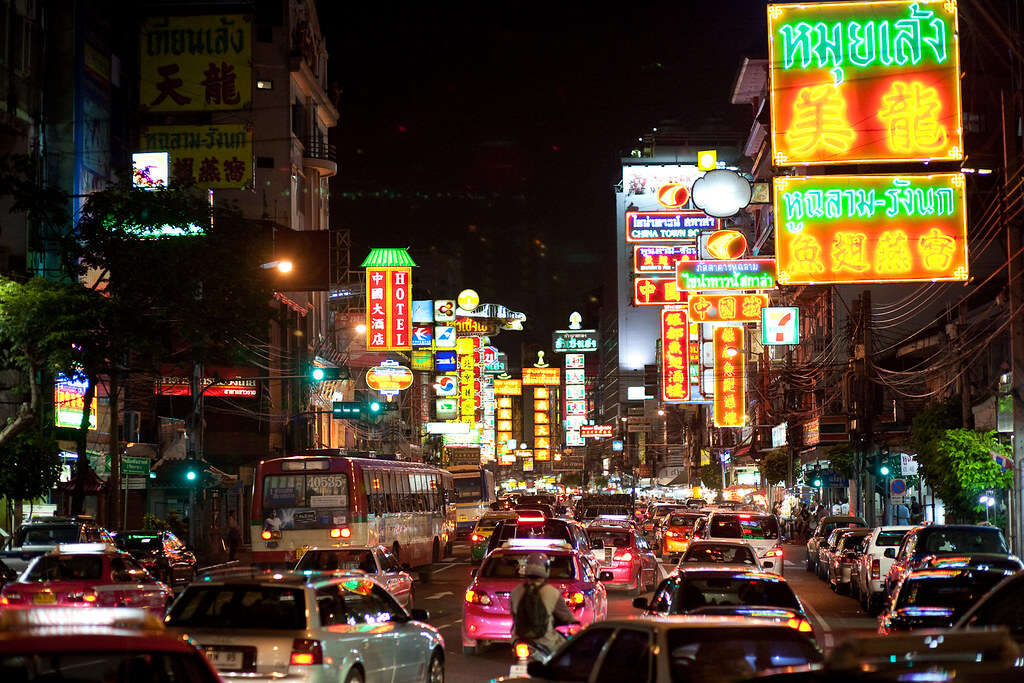 You do not like markets, but you can’t live without shopping? Then your choice is the shopping centers of Bangkok. The largest of them are Siam Paragon, Central World, MBK Center and Gaysorn. The choice here is no worse than in European shopping centers, and the prices are much lower. 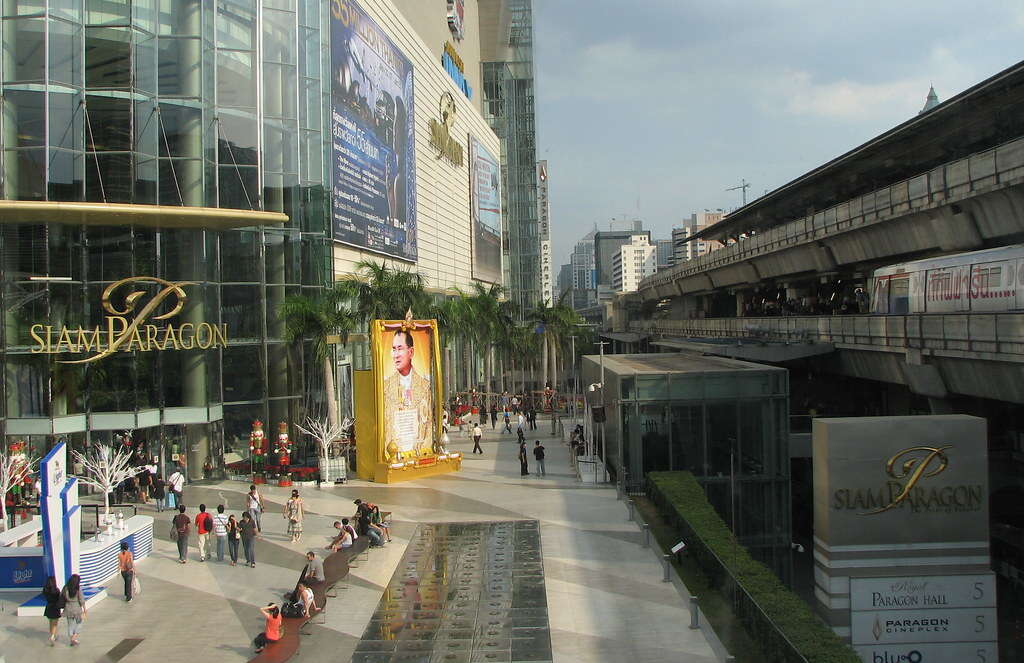 Walk around the Palace

Initially, the Grand Palace was built for the royal family, but the current king of Thailand does not live in it. Today, on the rather large territory of the palace, there are many thematic museums, about a hundred different pagodas, a temple, a royal library with sacred palm-leaf manuscripts and much more. 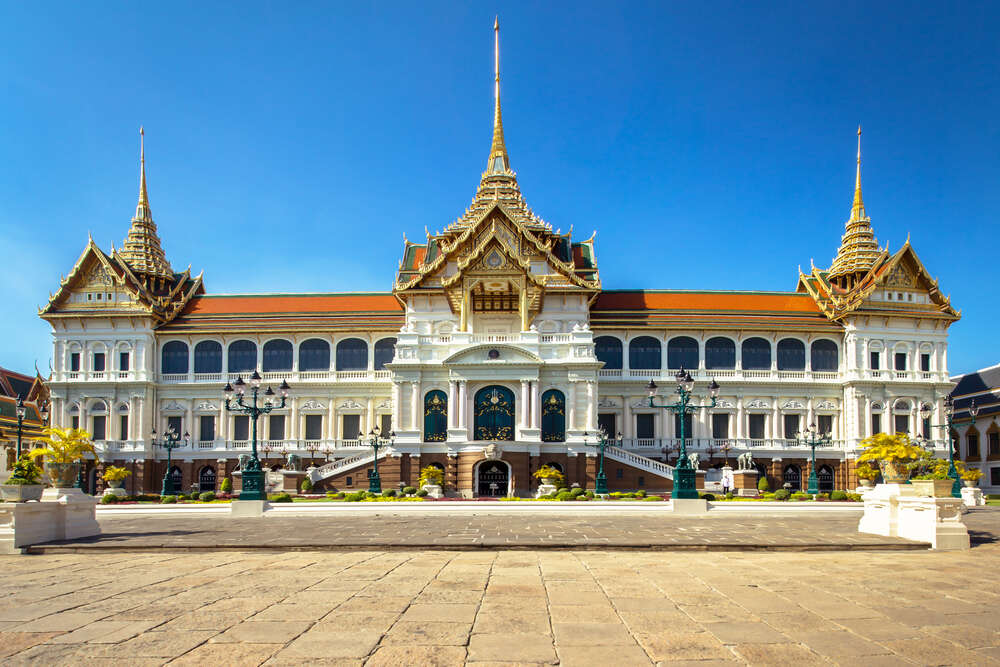 Khaosan Road is the noisiest, most touristic, most stereotypical place in Bangkok. It has the overwhelming concentration of bars and clubs for every taste, cocktails on Khaosan are poured not into glasses, but into plastic buckets, street vendors sell fried scorpions and locusts (by the way, Thais themselves do not really eat these things), and everything is saturated with an atmosphere of fun and revelry. 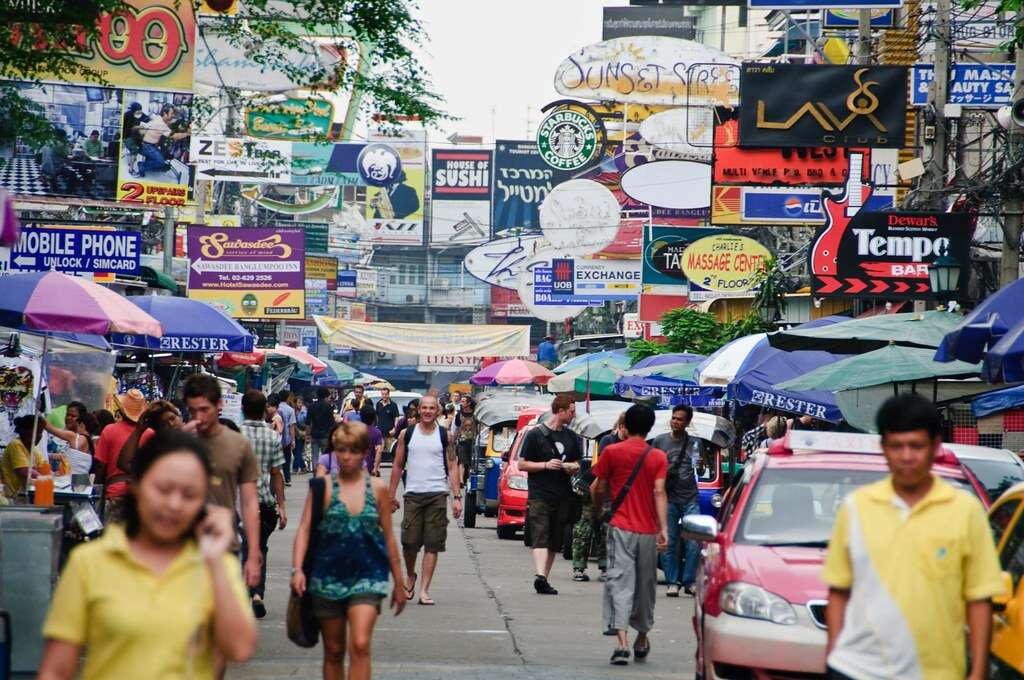 It is better to go to Khaosan in the evening, then it is the most fun here. If you want to make new acquaintances, then here you can settle in one of the hostels. Do not expect luxury conditions, but anyway, it will definitely be fun and noisy. Rambutri, the next street, is  a little quieter. 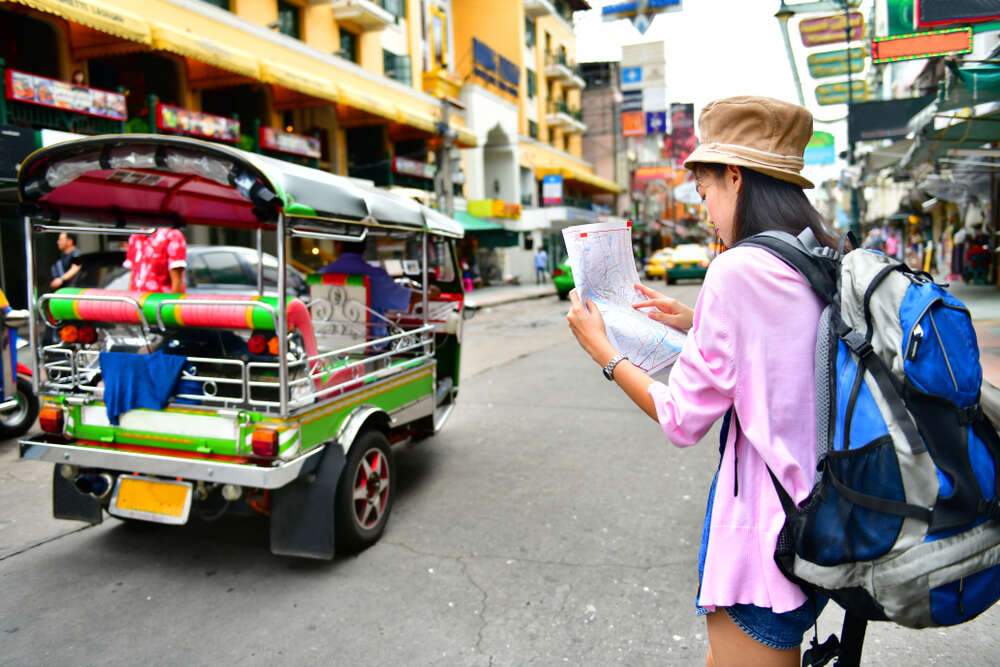 Soi Cowboy, the local red light district, competes with Khaosan for the title of Bangkok’s most brightest street. In its clubs, such things happen, which can drive even an experienced courtesan into the paint. Going to this street in the evening, remember about safety, as there are a lot of scammers in such places. 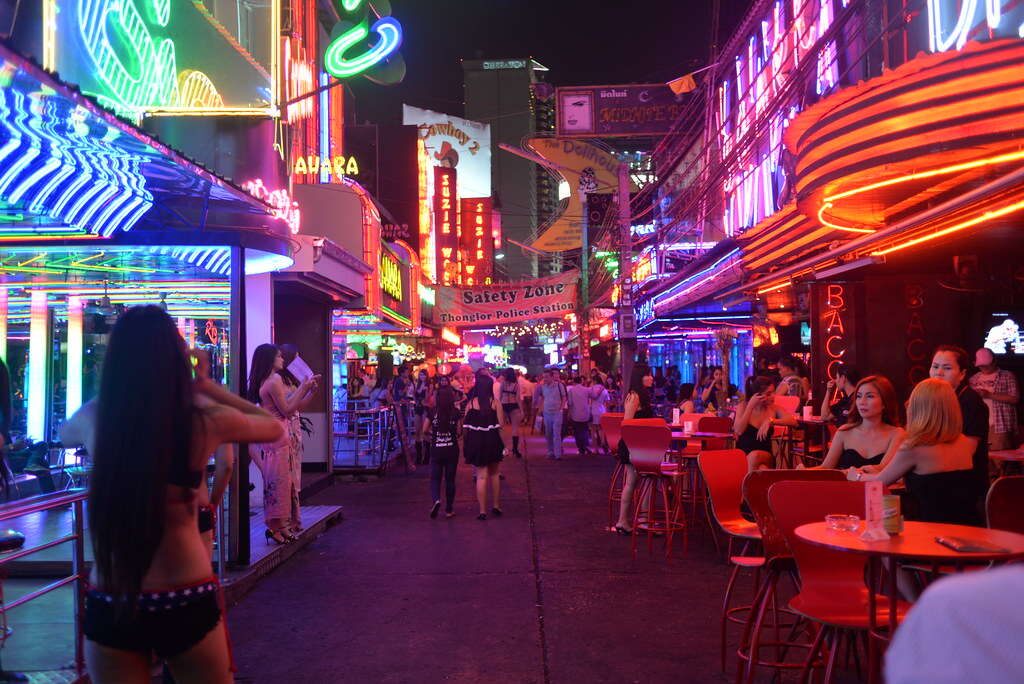 By the way, the Bangkok authorities plan to clean up Khaosan in the near future, removing most of the establishments from the street and bringing them to a decent appearance. So hurry up to visit the famous Khaosan Road.

Samui Island: What to do in the paradise corner of Thailand

Give yourself into the hands of a masseur

Massage is a feature of Thailand, and you can find places where it is done in any area of the city. In the tourist salons, you will be served aromatic tea after the procedure and will be treated very carefully. The institution for local people resembles rather a medical center than a luxury spa from the pictures. By and large, the true Thai massage is just therapeutic, with a hard eversion of the limbs. But do not be afraid of injuries, even in the non-tourist salon you will be asked, which parts of your body can be limbered harder and which are better not touched at all. A full body massage costs around € 8. 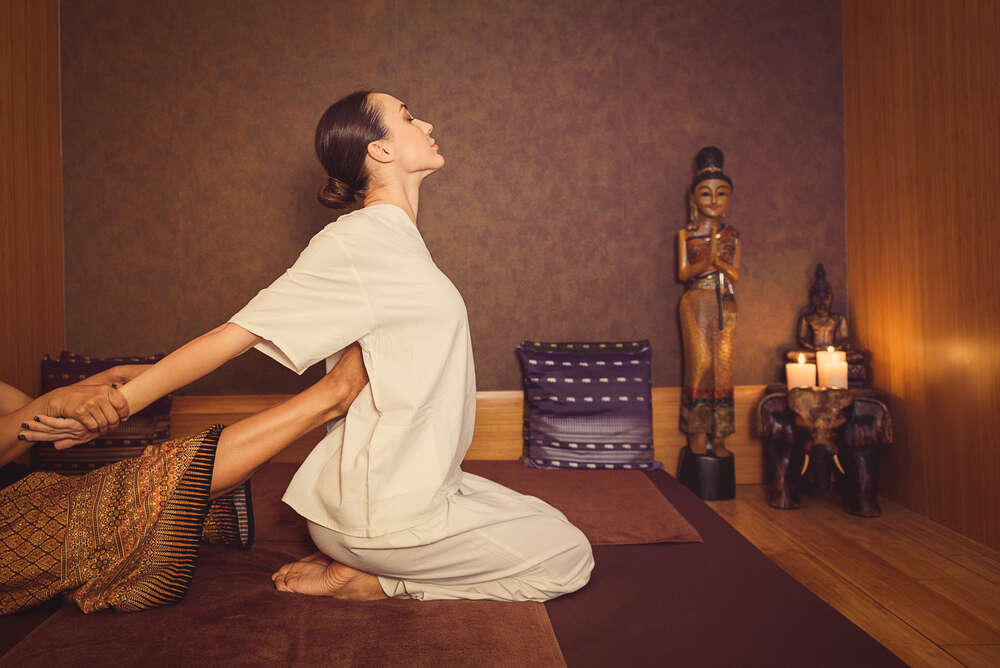 Wat Pho temple is considered to be the cradle of Thai massage, but the place is already so hyped and touristic, that there is always a crowd and a queue in front of the entry, and the price tag is higher than the Bangkok average. 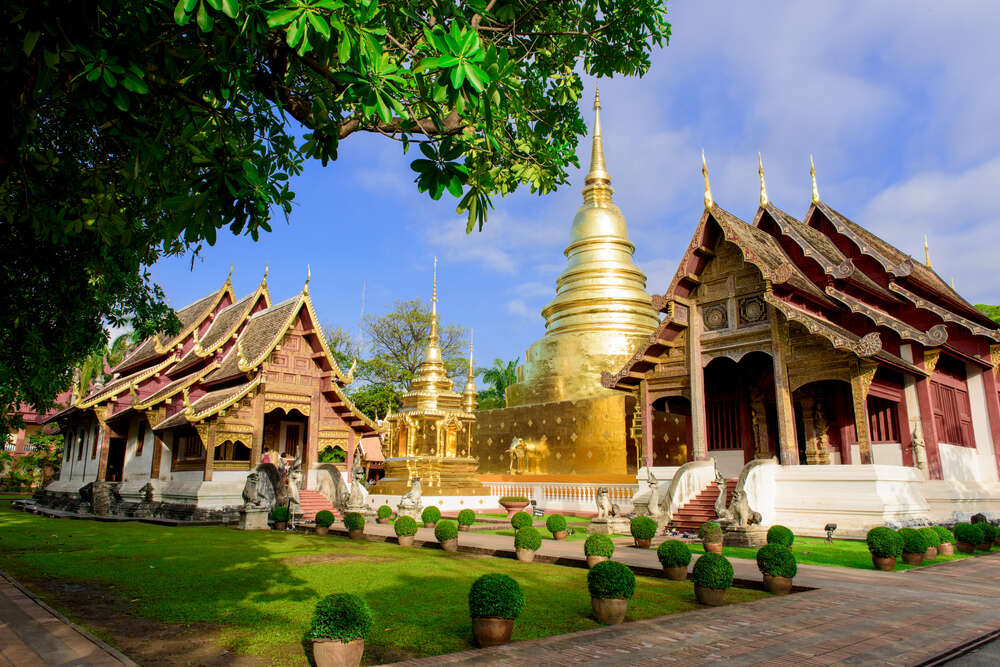 All by yourself: where to go for a retreat

Thailand in general and Bangkok in particular is a paradise for gastro-tourists. And it’s not only about cafes and restaurants, but also about street food, which has been elevated to cult here. Do not be afraid to buy flavored dishes on a mobile counter (hawker stalls), behind which there is an elderly Thai. They prepare for themselves and other locals, so the ingredients are always fresh, and all the hawker stalls are regularly inspected by the sanitary service. 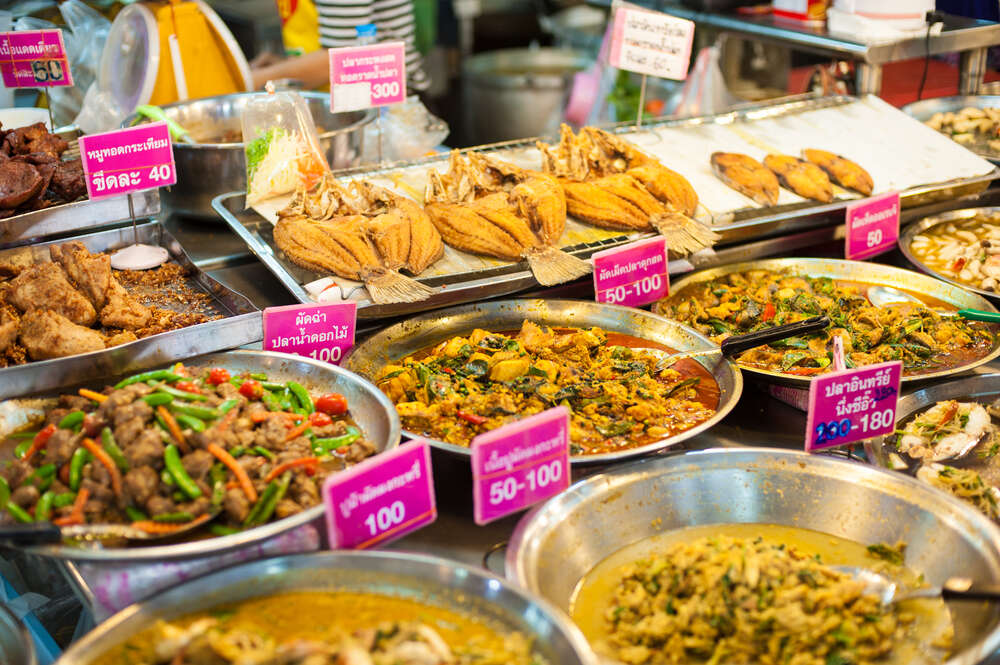 If you want to feel like a local, then go to any street eatery where they serve a hot pot. The essence of this dish is that they bring you a clay pot with broth, standing on hot coals, and you add ingredients to your taste there. These are mainly fish, seafood and greens. On the run, you can enjoy meat or fish balls on a wooden skewer or pancakes-rotti. 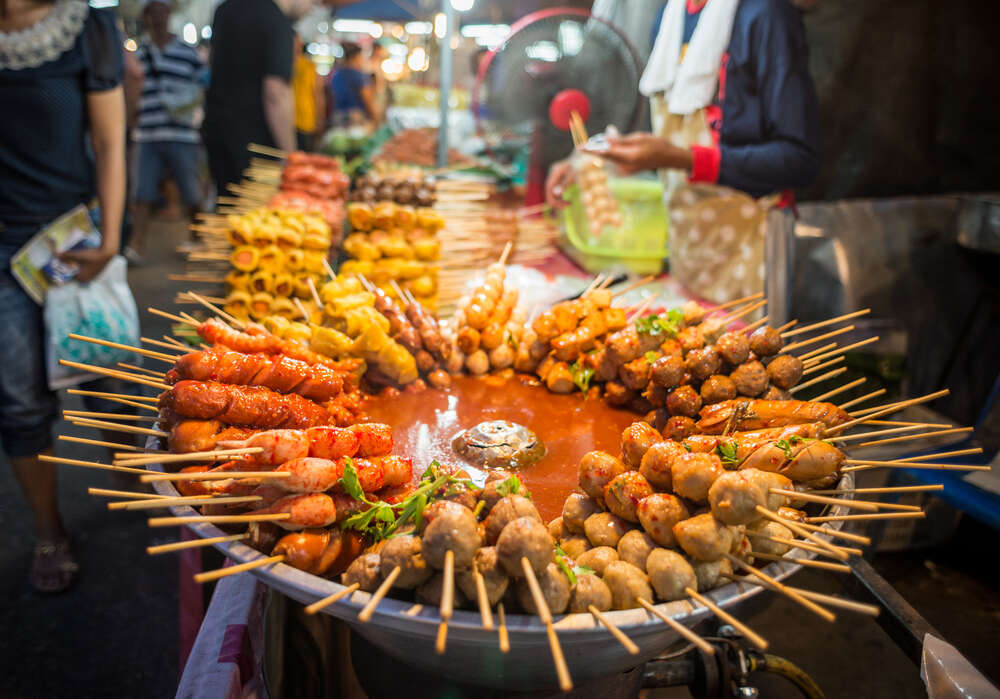 The most popular dishes in Thailand are pad thai noodles, tom yum soup, papaya catfish salad called som tam (or simply “papaya salad”), as well as dozens of curry species - yellow, red, green, massaman. A good portion of tom kha kai soup can be easily divided into two, and vegetarians will like spring rolls, rice paper pancakes with glass noodles and vegetables inside. 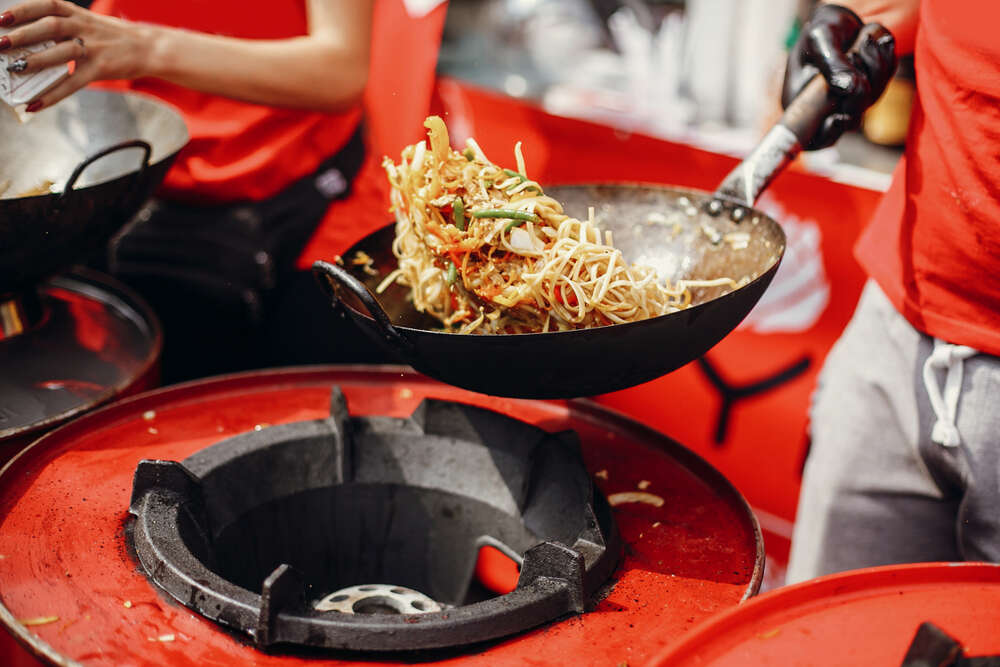 You can drink coconut water, smoothies or fruit juices, when eating spicy Thai food. And, if you don’t want to put out a fire in your stomach, just tell the seller or waiter “no spicy”, these two words can be understood everywhere in Asia. 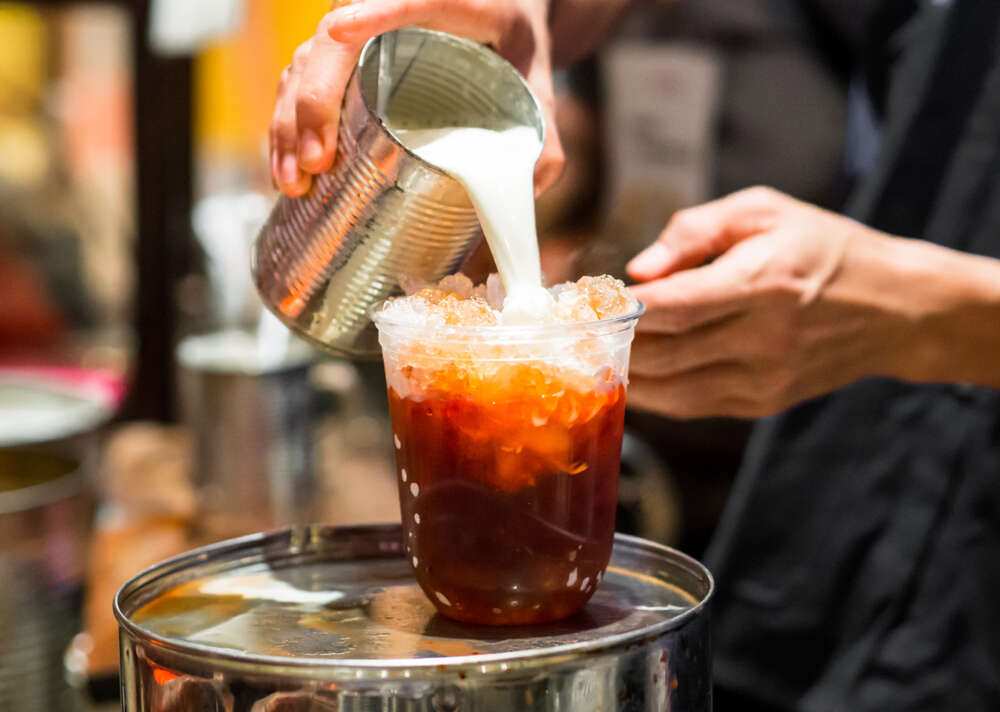 The best view of Bangkok opens from the observation deck, located on the 83rd floor of the Bayok Sky Hotel. The ticket price includes a drink in the bar, and the observation deck itself rotates, so that, standing in one place, you can admire the whole city. Climbing Bayok is best half an hour or even an hour before sunset. Then you can see the city in the sunshine, enjoy the sunset and enjoy the night-time views of the Thai capital. The price of the lifting up is € 7. 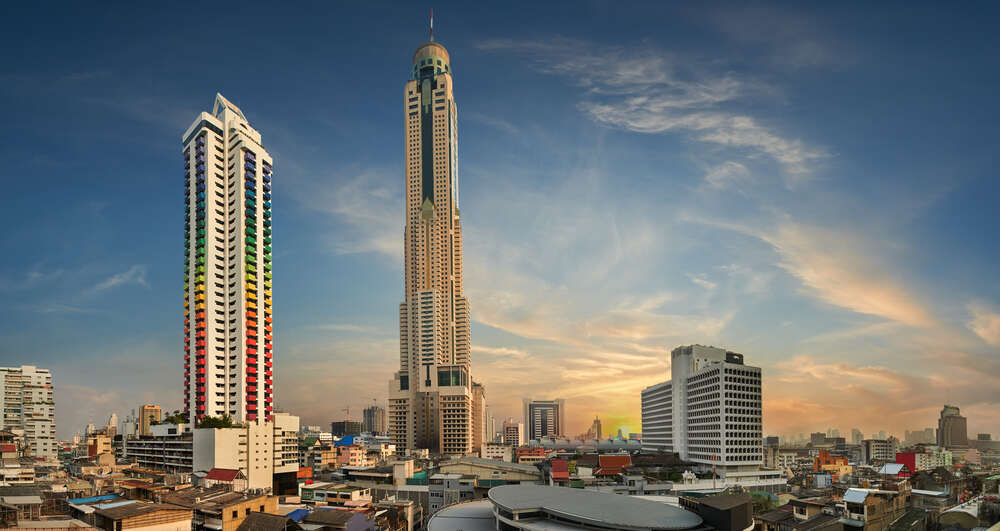 There are other great places to see the metropolis from above, such as the Moon Bar on the top floor of the Banyan Tree Hotel and the Sky Bar at Lebua Hotel. In the latter, by the way, the famous "The Hangover. Part II" was filmed. 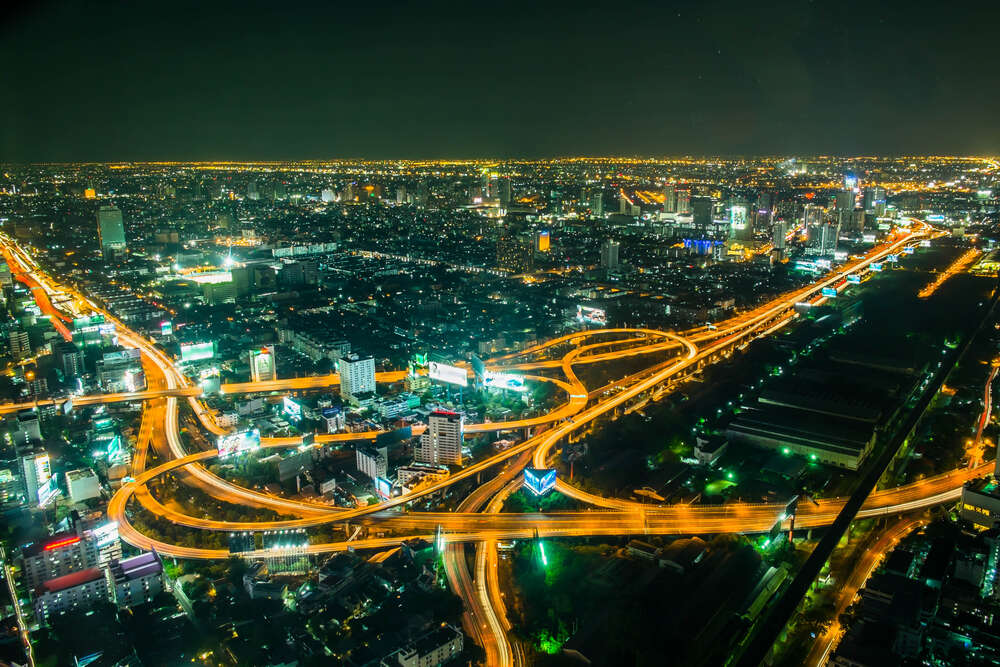 Sit in the park

Bangkok is a very green city with a lot of parks. The main city park is called Lumphini, and it is very popular among both locals and tourists. In Lumphini, you can just sit on a bench by the lake, or you can go in for sports by joining the joggers (there are thousands of them in the evenings) or the Thais in colorful tights doing aerobics. 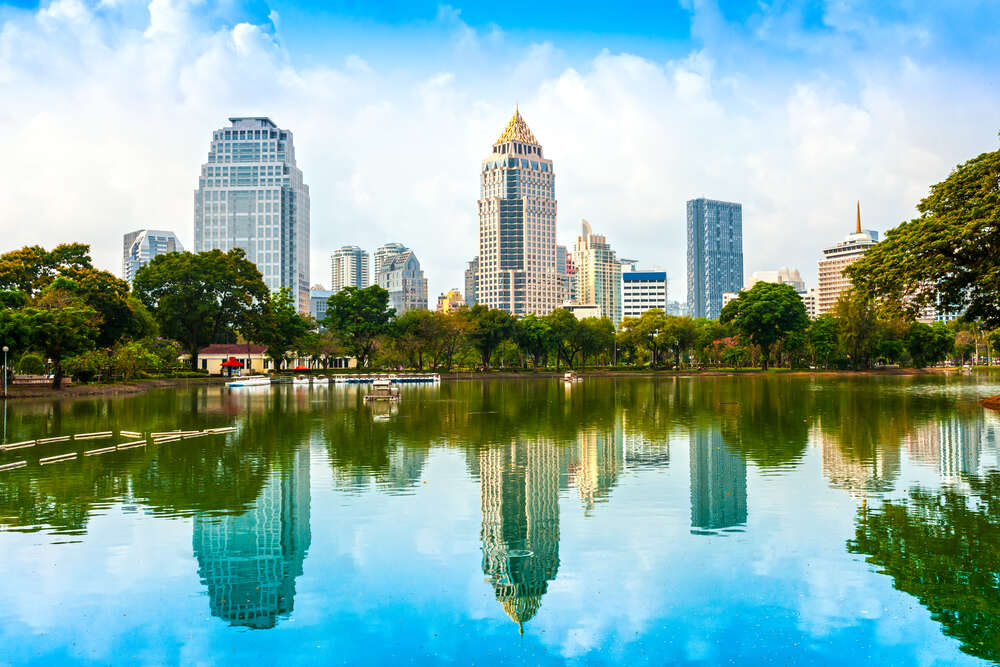 Also in Lumphini Park, you can feed the lizards or carps, and if you spend there for about 18 hours, do not be surprised with the music playing from the loudspeakers and all the locals suddenly stopping or standing up. This will be the national anthem, and the Thais are great patriots. 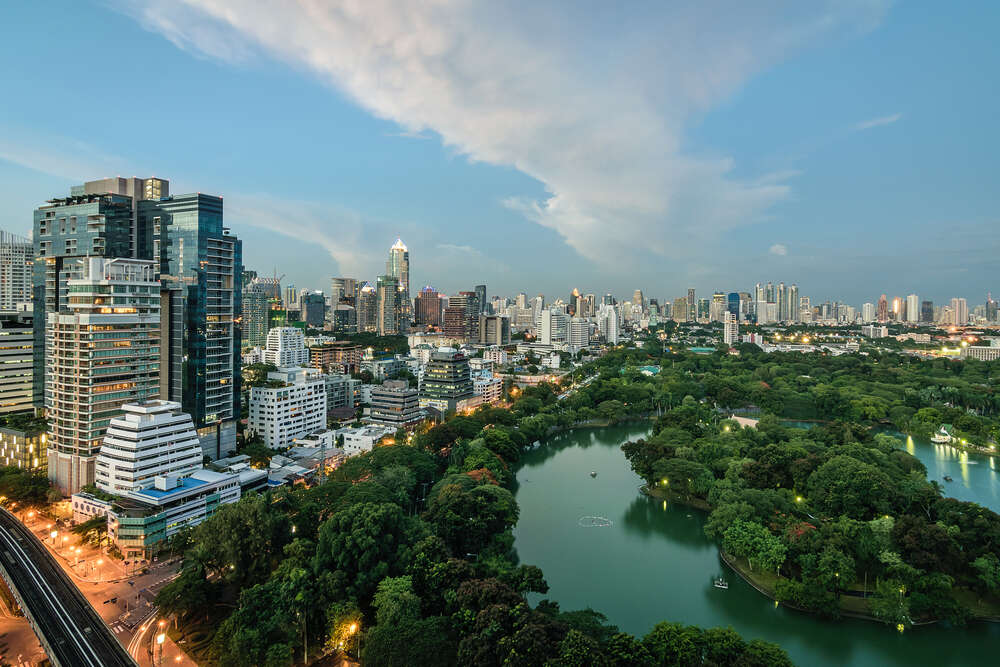 Temples and palaces, markets and shopping malls, parks and bars in Bangkok will definitely not leave anyone indifferent, and you will most likely want to return to this city again and again. And each time, it will reveal to you one more of its faces.