Almost every car enthusiast, having once visited a mountainous area on a serpentine road, as if after taking a drug, tries to find similar sections of roads or even return to the well-known hairpinned road more than once.

And if you take a closer look at the map of the world, you cannot count such serpentines and their types - it's a real delight not only for motorists, but also for travelers in general. For full immersion, you need a car and maximum visibility, that's all you need to feel the adrenaline rush from elevation changes, sharp turns and even 180-degree turns, gorges and sheer cliffs.

The serpentine itself differs from the usual mountain road in that it is not laid along mountain gorges or rivers, but perpendicular to them, providing the shortest path through the mountain ranges.

So, Travellizy Team has collected for you 10 of the most incredible hairpinned roads on the planet, which may take your breath away.

The name of this route was not given by marketers or reporters who are likely to dramatize... The Death Road owes its name to statistics, according to which about 200 people die annually on this 70-kilometer stretch of unpaved dirt road, which is unfenced along its sides. And, of course, these are not victims of high speeds or collisions at all. These are people who, having failed to cope with the control of their car, slide into the abyss.

In order to understand what kind of road this is in general, imagine trucks with trailers, buses, cyclists, motorcyclists scurrying along it in endless caravans... Meanwhile, in some sections, you can only drive in one direction, where vehicles that go down, give way to those who go up the mountain. You need to feel your car, if you want to back up in the conditions of an unfenced road edge, and so on.

At the same time, experienced motorists specially fly to Bolivia to drive along this road in both directions.

Car rental companies either refuse to lease cars to inexperienced drivers, or, having learned about the route, raise tariffs many times in order not only to discourage desperate extremals, but also to compensate for their losses.

Location: N Yungas Road, Bolivia, between the capital city of La Paz and the city of Coroico

Hardworking Chinese surprised everyone with another man-made wonder of the world. One of the world's sharpest serpentines is the Big Gate, or Heaven-Linking Avenue. This is just an 11-kilometer road with aт altitude up to 1100 meters, which literally crosses the Tianmen ridge. The highlight of the road is 99 very sharp turns, which can only be passed by one car. By the way, since the number “9” in China has a mystical meaning, there are countless numbers of different nines, except for turns.

The road is new. They began its construction in 1996 and finished it in 2005. At this moment, in terms of the level of danger, it can compete with the Bolivian Death Road. 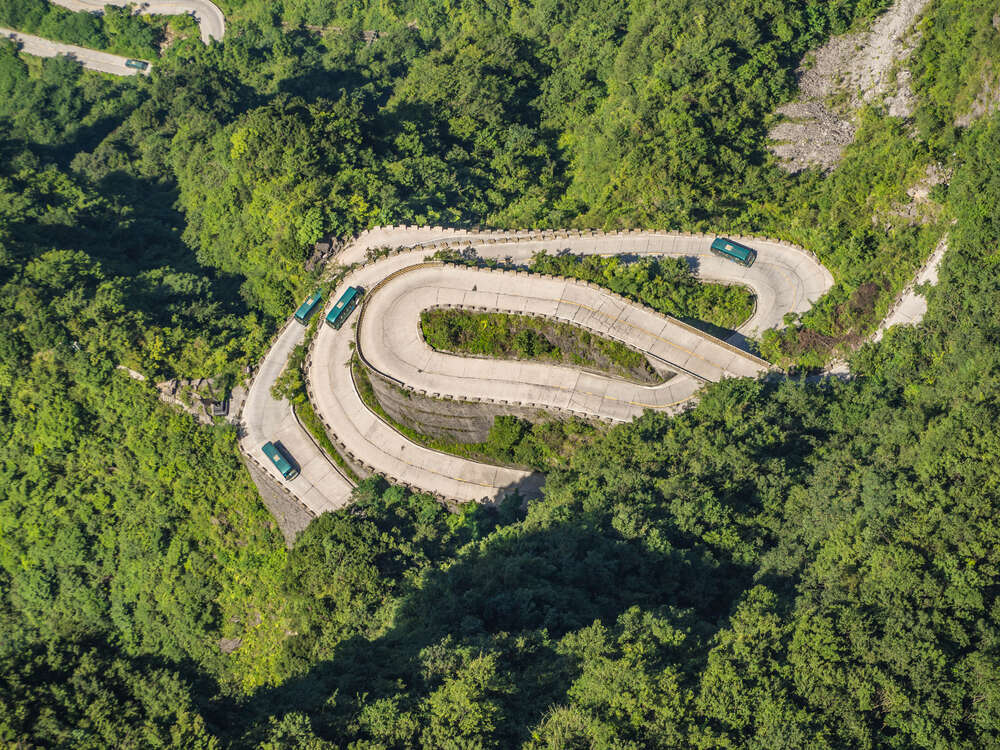 The Romanian high-altitude route that crosses the Carpathian Fagaras Ridge and connects Transylvania with Wallachia is not a dangerous road at all, but is incredibly picturesque. The road owes its popularity not so much to the dictator Ceausescu, who built it in order to tease the USSR with his support for the Czech Republic and Hungary, but to the hosts of the popular Top Gear TV show - Clarkson, Hammond and May, who named this road the best for driving sports cars. Its length is 261 kilometers. The track is open only in summer.

The Trolls' Path in Norway can easily compete with the Carpathian Transfăgărășan. The cult of mysticism associated with fabulous trolls did not ignore this track, which rises on the fjords and is very often shrouded in a strange fog. Due to the harsh winter and the abundance of rainfall, the road is closed from October to May. 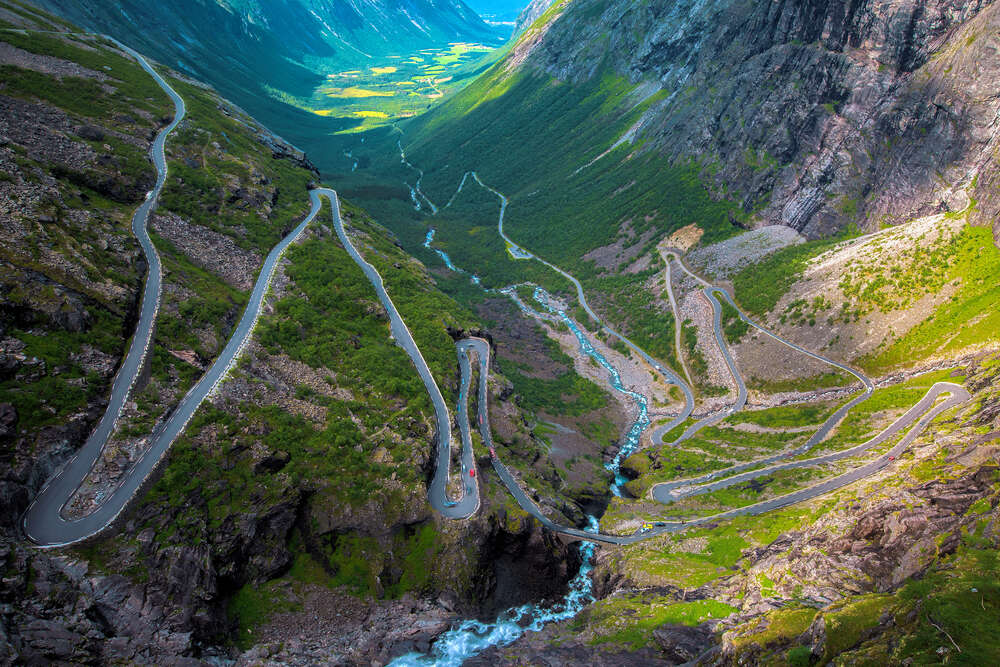 Stelvio Pass is a section of the international road that connects the Italian Tyrol with Austria and runs along the Italian part of the highlands of the Alp. Moreover, it is one of the highest mountain roads in the Old World, which rises to an altitude of 2,757 meters above sea level.

The road is so winding and complex (75 turns) that the famous Alfa Romeo named its SUV after it.

True, you don't need a SUV to conquer it, because this road is impeccable as elsewhere in Italy. It was built by the Austrian Empire back in 1829. Now, it's modernized.

In addition to the fact that by the level of danger this Indian, once military, road can easily compete with the Bolivian Death Road, it is also the world's highest mountain road with snow all year round on some sections.

The highway crosses the world's highest Himalayan passes, including Baralacha-La at 4892 meters, Lachulung-La at 5059 meters and Tanglang-La at 5325 meters above sea level. It is interesting that due to the lack of oxygen, many motorists on the highway may suffer the so-called mountain sickness with attacks of unmotivated panic, inexplicable joy or complete carelessness. The road is open for all types of transport only 4 summer months a year. At other times, there are frequent avalanches, landslides or snow drifts.

In terms of accident rate, this road, although inferior to the Death Road, is also very dangerous.

Another alpine serpentine Col De Turini is not only one of the highest, but also one of the most dangerous serpentines in the world. It passes at a maximum altitude of 1600 meters above sea level. Geographically, it's located above Monaco and Nice.

It is here that the 32-kilometer section of the most dangerous part of the Monte Carlo Rally of WRC is located.

For European motorists, this road is an excellent stress test, because on some sections, there is no road fence at all, and there is also the possibility of wild animals running out onto the track.

The Strada delle 52 Gallerie in Italy is not just a serpentine mountain road, but a whole museum of history. Today, the Pasubio serpentine road for conventional vehicles and a number of galleries is a military road from the First World War, which was cut through the rocks by the Italians to fight the Austrians.

The motor road is so narrow and slippery that you will not meet local motorists on it. But there are crowds of tourists and cyclists. The edges of the road in narrow places do not allow two cars to pass, and besides, the edge of the road from the side of the abyss is unfenced.

The pedestrian part of the road is just about 6 kilometers long and runs through 52 tunnels. 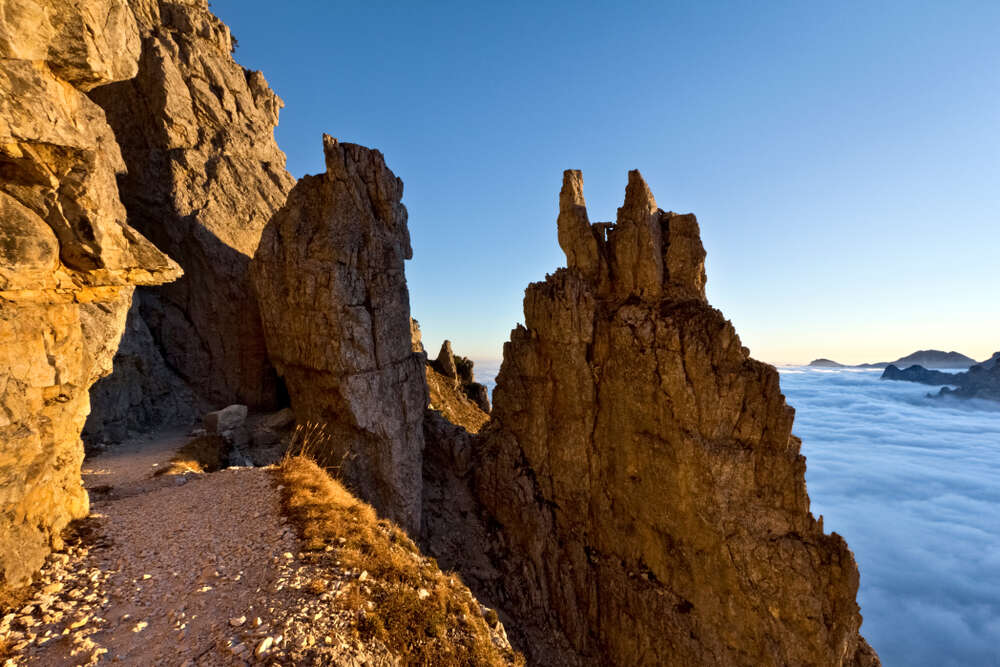 It is not at all difficult to imagine a serpentine road that encircles a mountain range like a snake. But the Chinese surprised everyone by creating a serpentine inside a sheer cliff.

In order to pave the road to the village of Guoliang, 13 residents began to manually knock out a cavity inside the rock, 1200 meters long and 4 meters wide. In 1977, this road was officially opened. But the Chinese did not even suspect that it would become a national landmark. Taking into account traffic for that moment, the road was built only for one-way reverse traffic, and special windows were cut out of the rock for illumination. 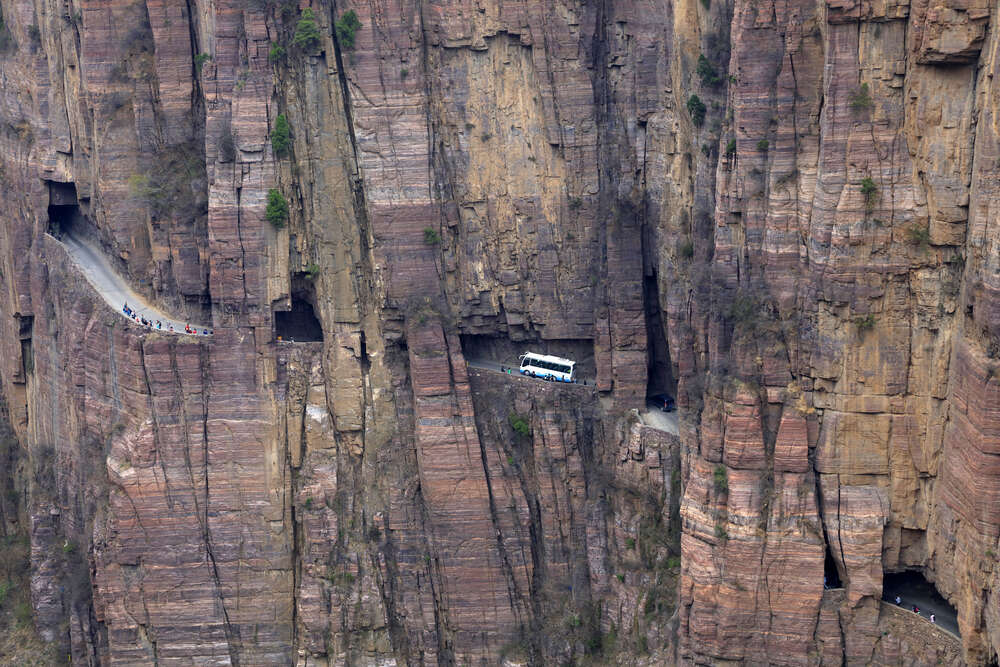 Well, if there is the most spectacular road in the world, then, of course, it is Los Caracoles between Chile and Argentina. It was built on an incredibly steep mountainside, with sharp turns and without fences from the side of the slope. The road is closed for most of the year due to snow. The rest of the time, due to the rains, it is also wet.

Drivers claim that this is an incredibly exhausting road, as there are absolutely no lay-bys for rest and selfies. 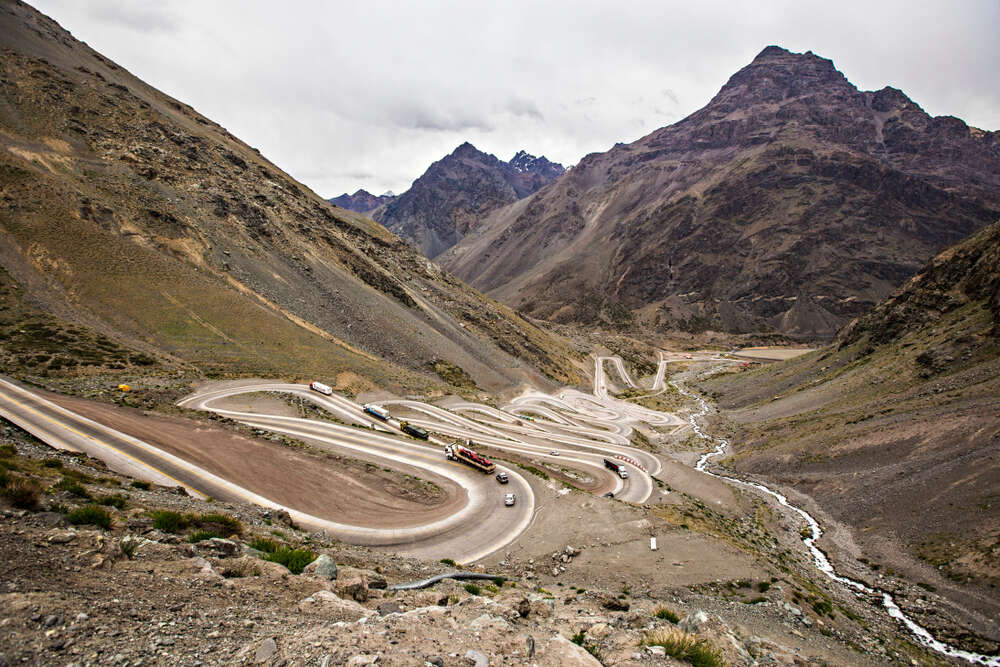 Like any road serpentines, this is not a tourist fun at all. It is much more interesting to see and evaluate them from the passenger seats. For drivers, this is an exclusively professional interest and an opportunity to test the technical capabilities of their car. Well, if you are both a tourist and a driver, then try to pass the serpentines not only in the driver's seat, in order to remember not only incredible turns!