The World's Most Beautiful Roads

Any journey is an equation with three variables. The first is point A, your starting point, which you are moving from. The second is point B, the final destination. It is this destination that is often paid the most attention to. But there is also a third component - the path itself. For some people, the process of moving from point A to point B is no less interesting than the finish. This is especially true when traveling by car or motorcycle. Today, we are talking about the roads, the journey along which will make you forget about the existence of the final destination and will give you pleasure from the very process.

✈️ Choose the most convenient flights at Travellizy ✈️

Once the highest mountain road in the USSR, it keeps attracting thrill-seekers many years after the collapse of the Soviet Union. As for the at level of extreme, a trip along this route can easily compete with a mountaineering ascent. Three high-mountain passes will stand in your way, and at the highest point, you will climb 4650 meters above sea level.

The Pamir Highway is so spicy due to the fact that the road is mostly unpaved. This means that it will not be possible for a beginner to drive here in any car. To conquer the Pamirs, it is best to drive a powerful SUV, take a walkie-talkie with you and a faithful companion for safety. And a few spare cans of gasoline, as gas station is rare in these parts. 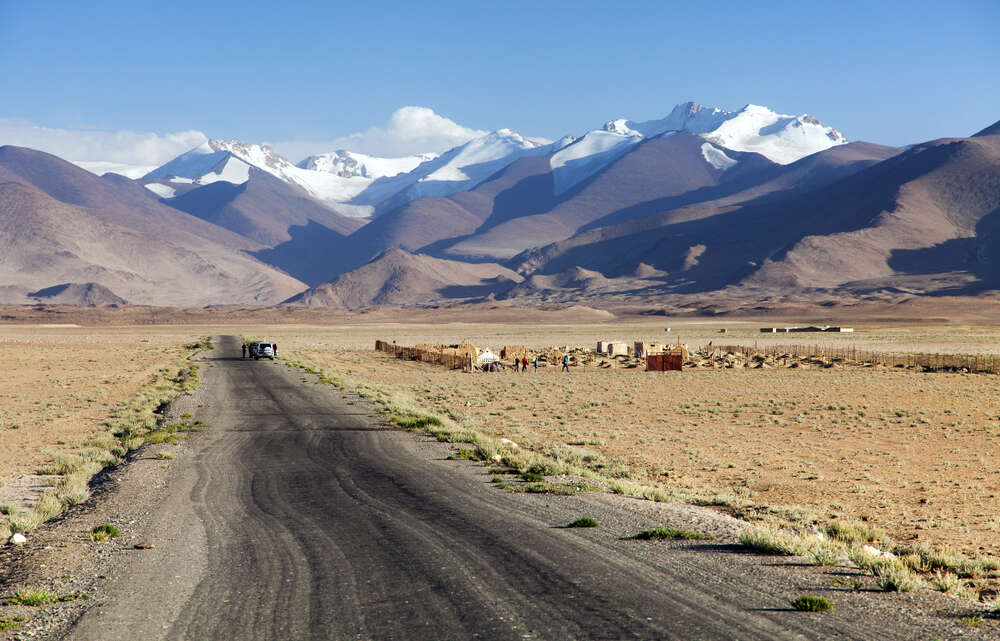 Why take such a risk? In order to admire the untouched high-mountainous nature of Central Asia. Cattle grazing on flooded meadows, national yurts of local residents, dizzying gorges and turbulent mountain rivers are just a small part of the views that will open to you during your trip along the Pamir Highway. You will see the white-headed Lenin Peak, you can plunge into Lake Karakul and take a photo against the backdrop of completely alien landscapes.

Traveling along the tract can be combined with visiting a number of natural attractions of two very distinctive countries. Please note that the road is open only in summer.

The world-famous Transfagarasan Highway was built so that it could quickly transfer tanks from one part of Romania to another. Tanks did not pass the road, but now is the season, and it is experiencing invasions of real armies of tourists. Traveling all 260 kilometers of Transfagarasan is the dream of many auto and motorcycle travelers.

The highway connects two regions of Romania - Wallachia and Transylvania. Yes, the famous Transylvania where, according to legends, Count Dracula lived. Unfortunately (or fortunately), you won't see vampires along the way, but you will see many other interesting things. For example, reservoirs, sandwiched between steep mountain slopes, villages, as if lost in time, mosques with thin minarets, Catholic churches. And how pleasant it is to visit a roadside tavern and refresh yourself with national dishes during a trip along steep serpentines! 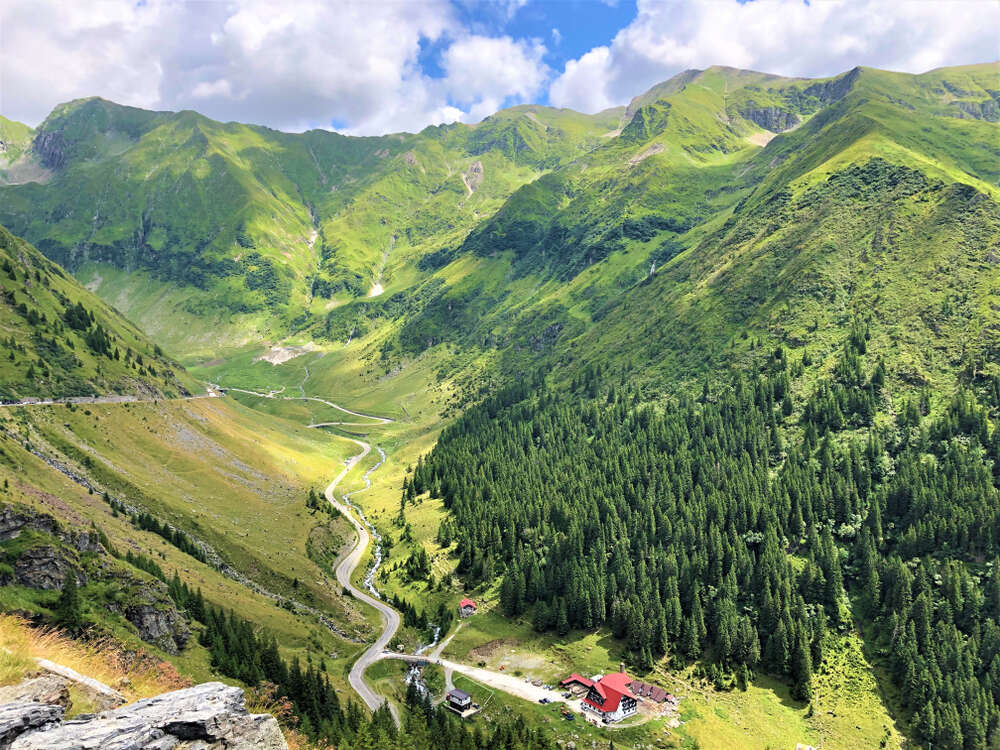 By the way, the Romanians turned the legend about Count Dracula into a tourist brand. As you drive along Transfagarasan, try to count all the hotels, cafes and shops that include the name of the prince who loved to impale. You will see two Dracula's castles on the route. The first of them is Bran Castle, where the vampire lived by Bram Stoker's design, the second is Poenari Castle, which belonged to Vlad the Impaler.

Like the Pamir Highway, Transfagarasan is open only a few months a year.

The road with boring number D23 passes through the Verdon Gorge, one of the most interesting natural places in France. Its depth is over 600 meters, and the richest flora and picturesque views make the gorge very attractive for travelers.

The most beautiful section of the D23 is called the Route des Crêtes. It starts at the exit of the town of Castellane and ends on the shores of Lake Sainte-Croix. The road is one-way, so you won't be able to drive in the opposite direction. Every few hundred meters, there are observation decks and picnic areas, so you can drive a small path all day long, taking breaks and admiring the gorge.

If time allows, you can turn to the castle of the Marquis de Sade. True, only ruins have been preserved to this day, but they look very impressive.

On the road passing through the Altai Mountains, there will be several things to take your breath away. Firstly, the incredible natural beauty. Secondly, understanding that this road was manually built several centuries ago by exiled prisoners. The modern Chuysky Trakt is a new asphalt road, but in some places stone cornices and man-made sections are still visible on the side.

The tract begins in Biysk and runs through Gorno-Altaysk. The road passes between the mountains, rises to the snow-capped peaks (be prepared for the sharp weather swings), winds past the Belukha River, which, according to legend, flows from the mythical Shambhala. Here, involuntarily, you will imbue these mystical moods and begin to look for signs in the double rainbows that often accompany the traveler in these parts.

Near the border with Mongolia, it seems that the Chuysky Trakt brings you to Mars. The clay-red Kurai steppe with its shaggy camels and yurts of shepherds can amaze even the most sophisticated traveler. 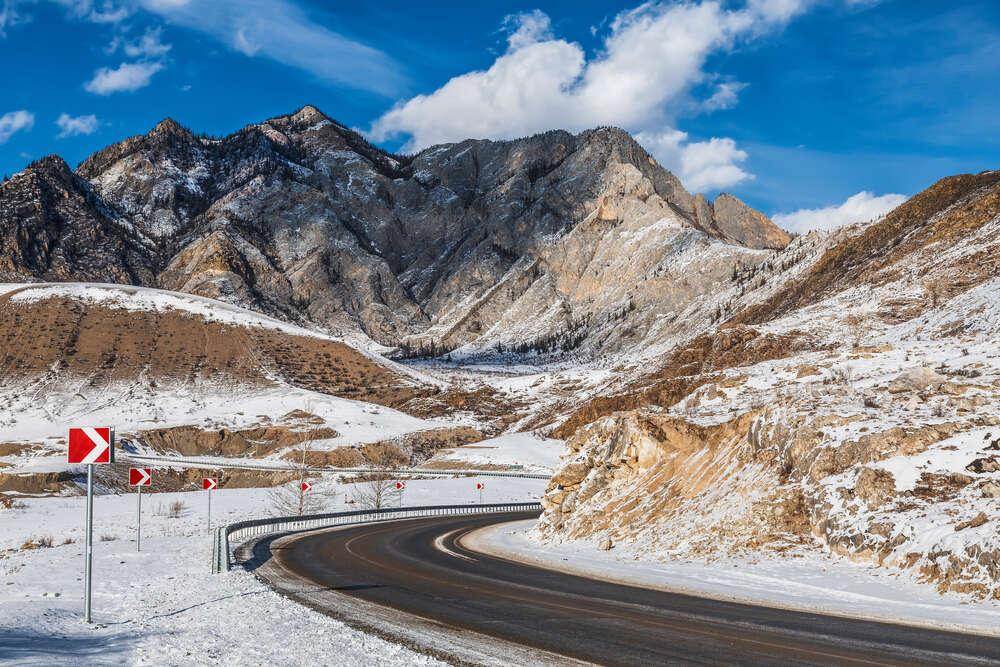 ✈️ Choose the most convenient flights at Travellizy ✈️

Trollstigen, or the Troll's Path, Norway

The most famous serpentine mountain in Europe really looks like it was built by fabulous creatures. In order to enjoy driving on it, you might need to have nerves of steel and good driving skills. And still have to be lucky with the weather, as Trollstigen is often covered with fogs. But even with all these nuances, a trip along the Norwegian serpentines will definitely be worth it.

The best way to get to the Troll's Path is along Highway 64, also known as the Atlantic Road. It is a masterpiece of engineering that connects many small islands and leads the motorist directly over the ocean. If you are riding a motorcycle or driving an open-top car on the Atlantic Road, be prepared to get wet from the splashing waves that are plentifully produced when crashing on the tracks. 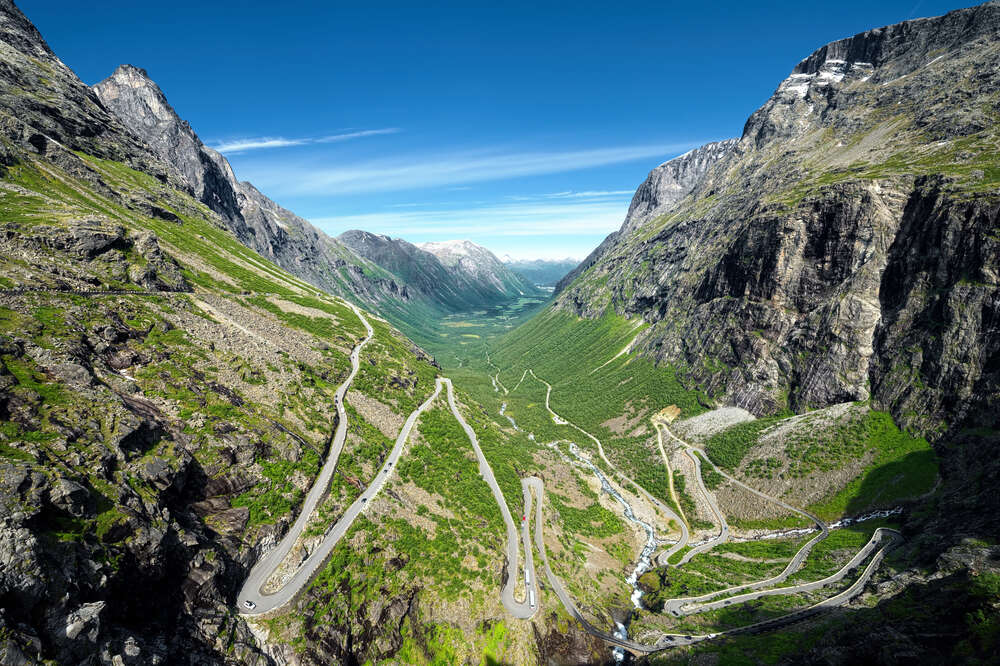 The Troll's Path leads the traveler past pastures, huge mossy boulders and waterfalls to Geiranger, one of the most beautiful fjords in Norway.

One of the world's longest roads stretches for 5,000 kilometers, but you don't have to drive all that distance to enjoy the route. You can enter it at any point, drive even a couple of hundred kilometers along the Argentinean Andes, and you will immediately understand why the road is ranked among the world's most beautiful. 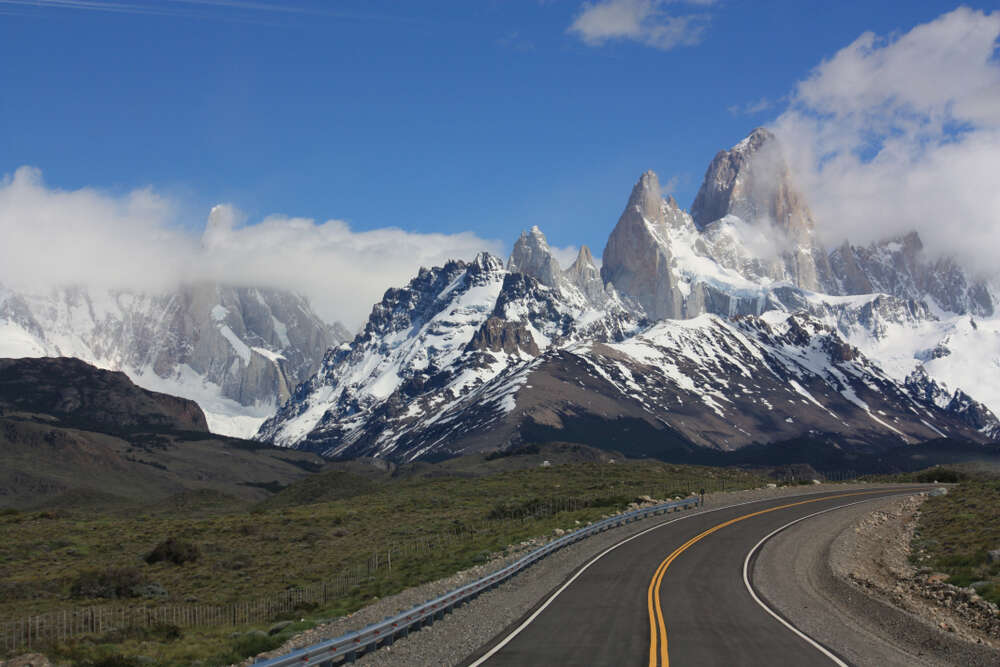 Route 40 passes through several climatic zones, so you can see rainforests, mountain plateaus, glaciers and deserts. In addition, it crosses through two dozen national parks, including Los Glaciares with its famous Perito Moreno Glacier. And in the Calchaquí Valley, you can descend from lifeless rocks to the flora and fauna of the subtropical jungle in a few hours. If you want to see flocks of unafraid flamingos, take Ruta 40 to the lakes of Patagonia.

Originally, the road, which stretches for 243 kilometers along the coast of Australia, was a war memorial of no practical importance. But when the cars of travelers began to drive along it, it turned out that the highway built by soldiers after the First World War leads through a lot of beautiful places. Thus, the highway entered the top of the world's most beautiful roads. 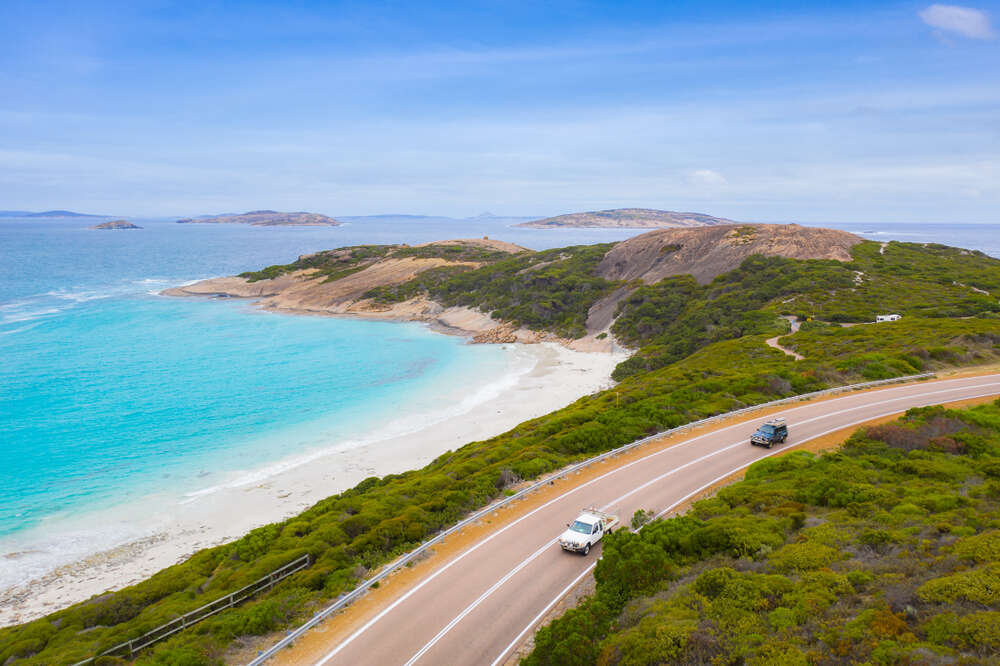 Driving the Great Ocean Road is a thrilling Australian adventure. There are herds of kangaroos, flocks of ocean birds, and even whales emerging from the waves. The route leads past some of Australia's famous natural attractions, such as the Twelve Apostles Rocks and the infamous Shipwreck Coast. And if you take a surfboard, you can just take your hands off the wheel for a while and try to ride the waves of the Pacific Ocean.

The road that runs along the Colorado Plateau reminds you of the time of the development of the Wild West. It runs through the lands of the Navajo Indians, past the colorful Antelope Canyon and the Grand Canyon, the most famous of the US canyons.

The Colorado Plateau is known for the largest concentration of national parks in the United States, so it makes no sense to list all of its attractions. It is best to travel along the Great Circle with a good amount of time to take a good look at all the interesting places from Hoover Dam to Route 66. 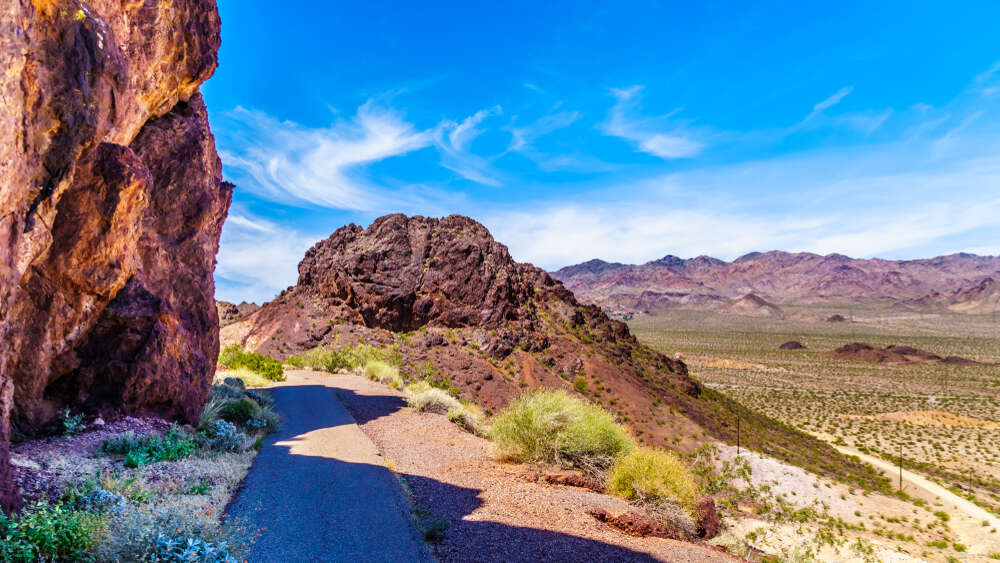 There are many beautiful roads in the world. And even an ordinary track can become desirable if it leads to new adventures.
✈️ Choose the most convenient flights at Travellizy ✈️Read more:
➱ Antelope Canyon and More: Travel Tips

➱ The world's most beautiful lakes

➱ The Most Incredible Hairpinned Roads On The Planet